Just like every other Apollo astronaut, Dave Scott was given an Omega Speedmaster Professional with a caliber 321 movement as Omega delivered reference 105.012 and 145.012 watches to NASA shortly after Omega was officially announced as supplier of the timepieces used for Extra Vehicular Activities (EVA) by astronauts. 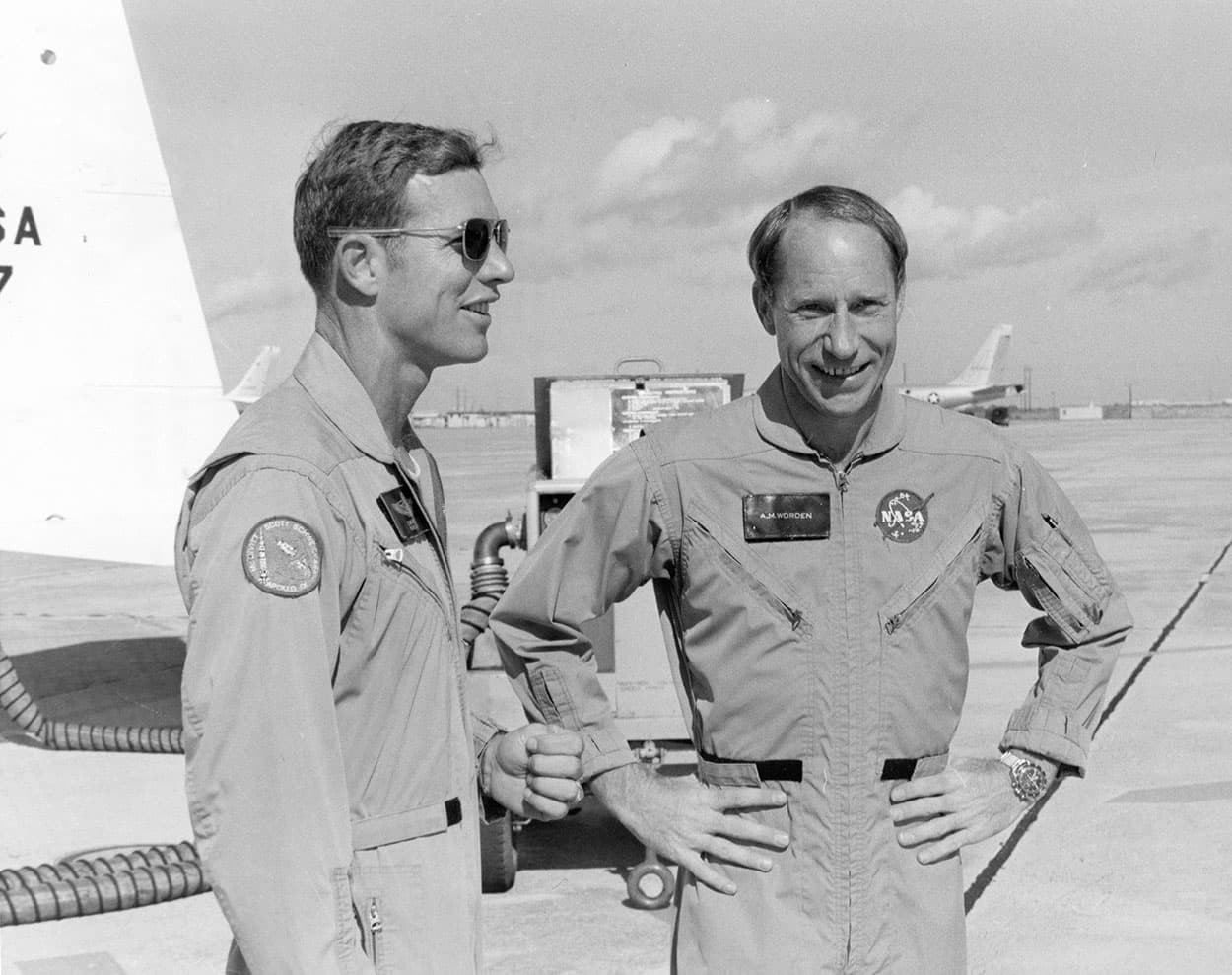 The published transcript of the second EVA of the Apollo 15 mission (See below for an excerpt) shows interesting information for watch fans. It seems that after the EVA-2, Dave Scott noticed that the Hesalite crystal of his Omega Speedmaster Professional popped off when he returned to the cabin. During the EVA-3 here therefore used his back-up watch. For a long time, people (including Dave Scott) were under the assumption that this back-up watch concerned a Waltham timepiece. However, in 2014 he found out that it wasn’t a Waltham but a Bulova. A Bulova Chronograph model 88510/01. That is the watch we are about to discuss with astronaut Dave Scott in our Q&A below and that is the watch that will be auctioned by RRAuction on October 22nd 2015.

[Dave may have had his watch hanging from the instrument panel and, in any event, he is now putting it on and is probably starting the stopwatch function.]

[Scott, from a 1996 letter – “I do not recall ever having looked at my watch after egress. In the cabin after EVA-2, I noticed that the crystal of my Omega had popped off sometime during the EVA. Therefore, on EVA-3, I used my backup watch (which was) of a similar type. It worked just fine during the even higher temperatures of EVA-3.”]

[In Dave’s 1996 letter to me, he said that the back-up watch was a Waltham. After further researching the issue for an article on watches, Dave wrote in early 2014, “Frankly, back in 1996 I just made a mistake — it was a Bulova, not a Waltham. When you asked in ’96, things were a bit hazy after 25 years, and I hadn’t fully researched many of the ancillary parts of the mission. However, more things are coming into focus these days as more people are researching Apollo.” Dave has documentation that tells us that the backup watch he wore on the lunar surface was a Bulova Chronograph, Model #88510/01. The Part Number on the wrist band was SEB12100030-202.]

[The EVA has started.]

Fratello Watches had a unique opportunity to ask Gemini 8, Apollo 9 and Apollo 15 astronaut Dave Scott a couple of questions regarding that back-up Bulova chronograph that he wore on the surface of the Moon. A watch that will surely be an interesting auction item on October 22nd for those interested in the space program as well as watch geeks, or a combination of the two. 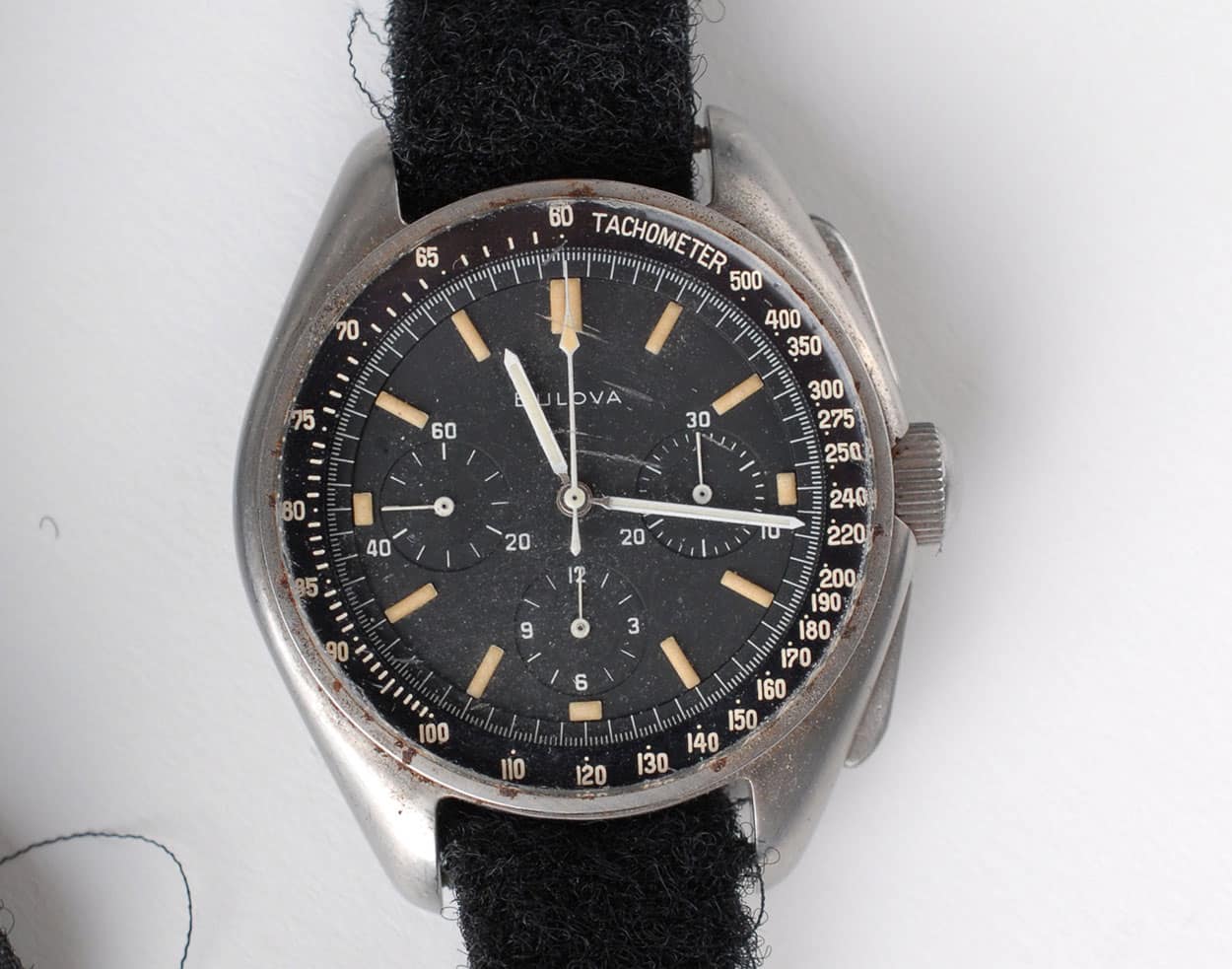 Fratello Watches: How did you end-up with the Bulova Chronograph? Is it something you brought in privately and just wore it?

Dave Scott: Approximately four months before the mission, through a good friend and colleague, I was contacted by corporate management of Bulova requesting that I evaluate the Bulova Chronograph during Apollo 15. I informed Bulova that I would attempt to give the Bulova a full evaluation during many typical types of space activity.

As we drew closer to the mission, and began to comprehend the increasing complexity and risk of the mission, it became apparent that minimizing risk would involve as many back-up capabilities as practical. In particular, certain situations would occur that required a precise knowledge of oxygen and water remaining in our backpacks such that we could return to the safety of the Lunar Module before our life support consumables expired.

Under certain anticipated operational conditions, the only method of monitoring these vital systems was with a wrist chronograph. I only had the NASA-provided Omega Speedmaster, which was a single point failure under these conditions, a failure that could have resulted in the loss of the mission and/or the crew. As a matter of prudence, I then decided that I would also carry the Bulova as a back-up. After the mission, only my supervisor and my crew knew that the Bulova had been carried, Bulova was not informed.

FW: The Bulova shows some similarities with the Omega Speedmaster, was that of importance to you?

DS: Yes, the Bulova appeared to be in the same functional configuration as the Omega; and thus a similar timepiece for the task at hand.

FW: Did James Ragan (responsible for the procurement of the Omega watches at the time) have a say in this as well?

DS: I did not know James Ragan.

FW: How would you rate it against the NASA issued Speedmaster Professional and why did you use the Bulova as a backup?

DS: I did not make a direct comparison of the Bulova with the Omega. The Bulova was used because it was available and precluded the loss of timekeeping due to some generic problem or failure with the Omega. 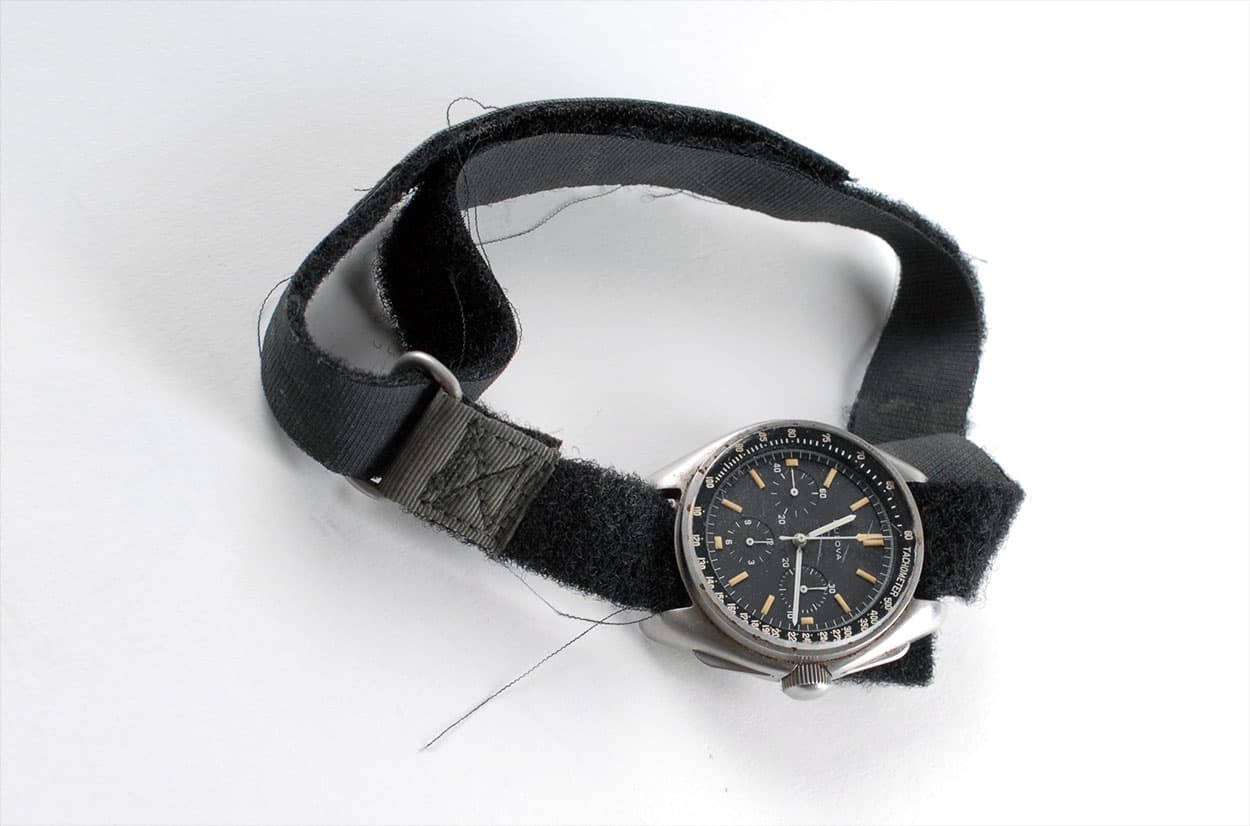 FW: Did you use the chronograph to time certain events or activities during the mission?

DS: The watch was available for lunar surface activities (as summarized above) as well as for timing the arrival at the Earth’s atmospheric interface, discussed below.

The reentry into the atmosphere upon to return to Earth was one of the most time-critical events of the mission. The events onboard the spacecraft were all based on a specific time at which the Command Module would begin to enter the atmosphere (an altitude of 400,000 feet) – the “Entry Interface” (“EI”). The precise time at which EI would occur was based on tracking from the Mission Control Center – all events prior to and subsequent to the time of Entry Interface were based on elapsed time; that is the minutes and seconds before the EI and the minutes and seconds after the EI, such as the beginning of computer guidance, communications “blackout”, parachute deployment, and splashdown.

As an example, precisely 28 seconds after the EI was the exact time at which the atmospheric force on the spacecraft was .05G, or 1/20th of a G. At this point a .05G light would illuminate and the computer would begin its reentry guidance program.

Should this not occur at the precise 28 seconds after EI, the spacecraft would be on an off-nominal trajectory and could either skip out of the atmosphere or potentially never return, or it could dig into the atmosphere and be destroyed by heating or excess G-force. Therefore, the timing of the EI was absolutely critical; and although the spacecraft had a timer, and each crewman had a watch, the backup Bulova provided an extra margin of safety. 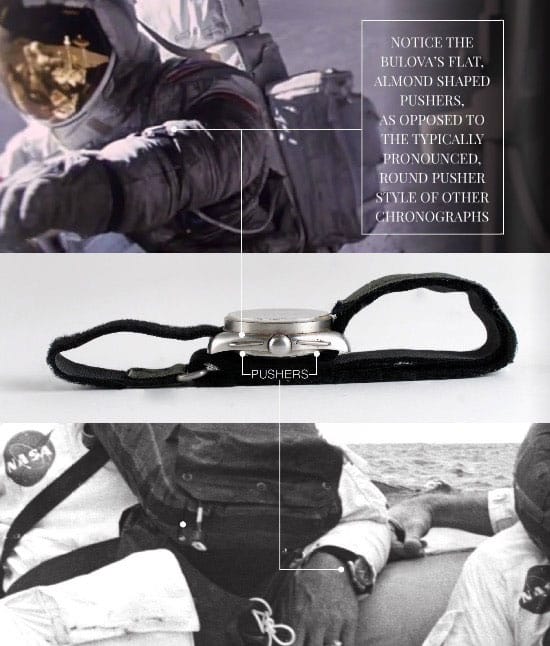 FW: How did the Bulova end up in a private collection?

DS: The “private collection” is my personal collection of A-15 memorabilia.

FW: Had the crystal not popped off your NASA-issued Omega Speedmaster and the Bulova watch remained inside the lunar module, what were your original plans for testing or assessing the latter while on the moon or during the mission?

DS: I had no specific plans; the Bulova would have remained stowed.

FW: Did you use the Bulova at any other times during the mission, especially prior to EVA-3?

DS: No. I used the Bulova during EVA-3 and all subsequent activities including two days in lunar orbit, transfer from the Moon to the Earth, and Earth reentry and splashdown.

FW: Do you remember specifically using the Bulova during EVA-3? If so, when and what were you doing?

DS: I do not recall any specific use, but it was on my wrist from the moment I suited up for EVA-3 until I took it off after the mission completion. In the event that I had to rely on it as a backup in any number of known or unknown situations it was immediately available.

FW: The Bulova watch, as offered, is attached to the velcro watchband that you also used with your issued-Omega Speedmaster on EVA-1 and EVA-2.

FW: Do you recall if you had to remove the Bulova from another watchband to use it on EVA-3? Was that another velcro wristband, or was it a different type of bracelet? What became of that bracelet?

DS: The Bulova was most likely stowed without a band (I may still have the original Bulova band, but it could not be worn with a pressurized suit. The cloth Velcro watchband now attached was required for the watch to be used both suited and unsuited.

FW: After the mission, what happened with the watch? Were they ever provided to Bulova for assessment?

DS: NASA post-flight personnel collected all equipment on board the spacecraft and subsequently gave the Bulova back to me. I do not know what occurred between splashdown and delivery to me.

FW: Was there ever any comparisons made between the watch’s performance and the Speedmaster’s?

DS: Not by me. We had a very full mission for which to prepare, so I was not able to compare the watches performance directly. However, I was aware that the Bulova had apparently passed all of the NASA watch performance and qualification requirements. 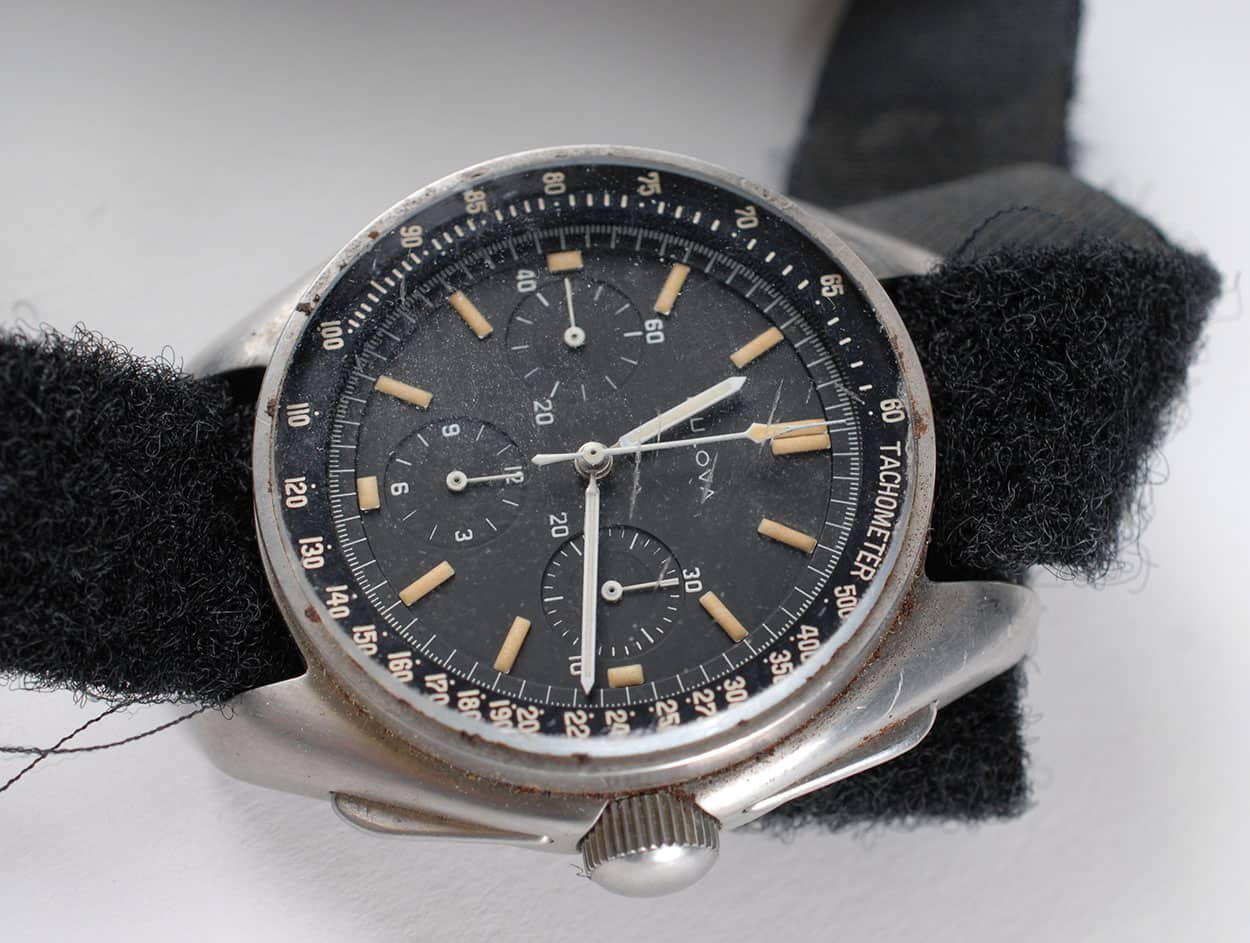 FW: You had previously told the Apollo Lunar Surface Journal (among others) that the watch brand was Waltham. When and how did you discover your mistake and do you know what led to you misidentifying it earlier?

DS: In 1996, 25 years after the mission, I was queried about a backup watch. At that time I slightly recalled that it was a Waltham. However, in 2014, after further researching the issue for an article on watches, I concluded that frankly, back in 1996, I just made a mistake — it was a Bulova, not a Waltham. Knowing what watch I wore was not a priority during mission discussions, especially in light of the complexity of our flight to the Moon, and I hadn’t fully researched many of the ancillary parts of the mission. However, more things were coming into focus in 2014 as more people were beginning to research Apollo in more depth.

FW: What do you hope the watch’s new owner does with it? Would you like to see it publicly displayed? 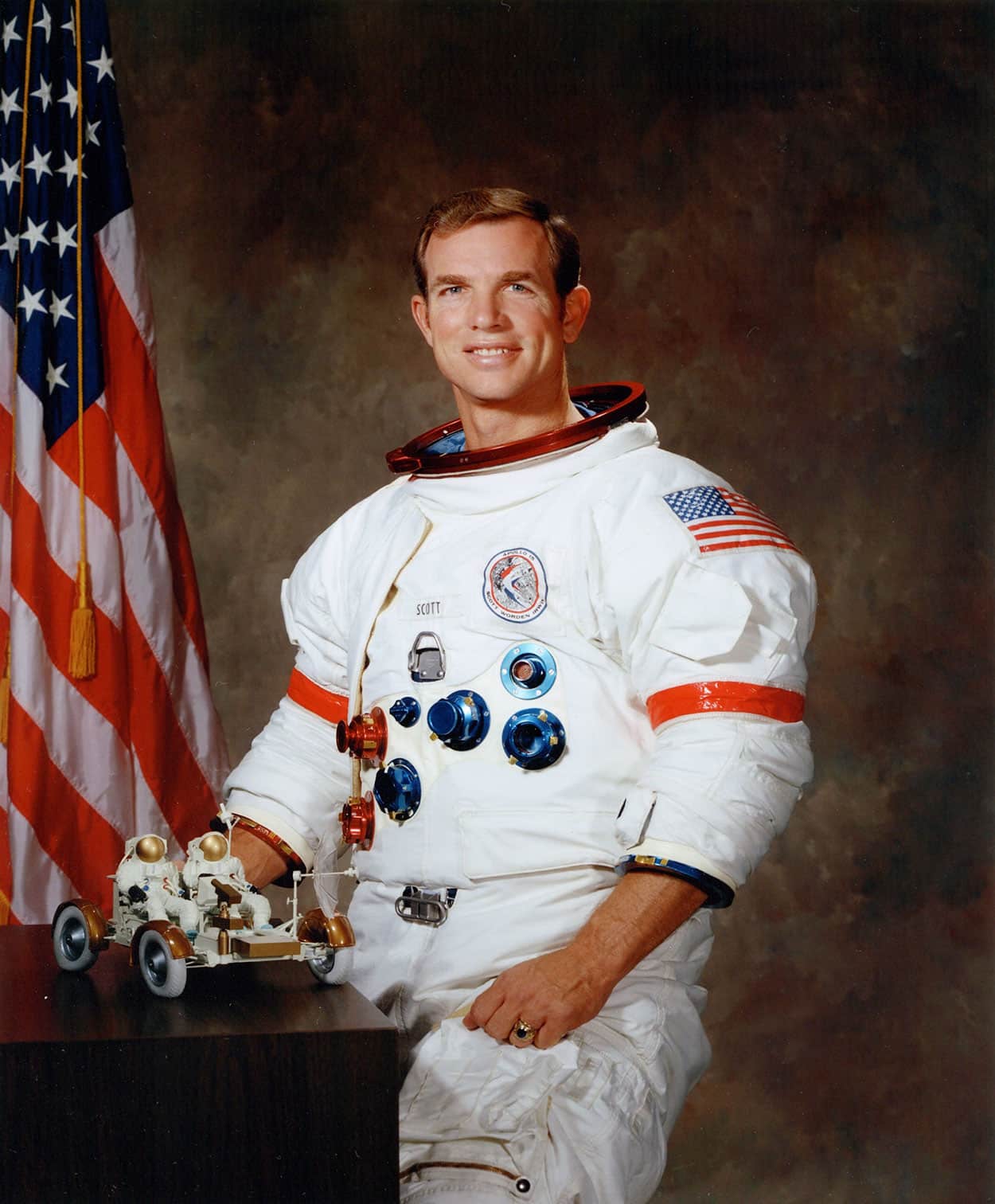 We want to thank Dave Scott for answering our questions. More information about the Bulova Chronograph watch that will be auctioned by RRAuction can be found here.