I have to admit that I wasn’t expecting classic American cars to star in the latest Breitling capsule collection. However, it’s wise to assume the unexpected these days when it comes to the ever-evolving brand. The fact that these watches sit within the Top Time line seems fitting as well. After all, we have ’60s-based chronographs and cars from the same era. Blending cars and watches are a tough business with more failures than not. Was Breitling successful? Let’s take a look. 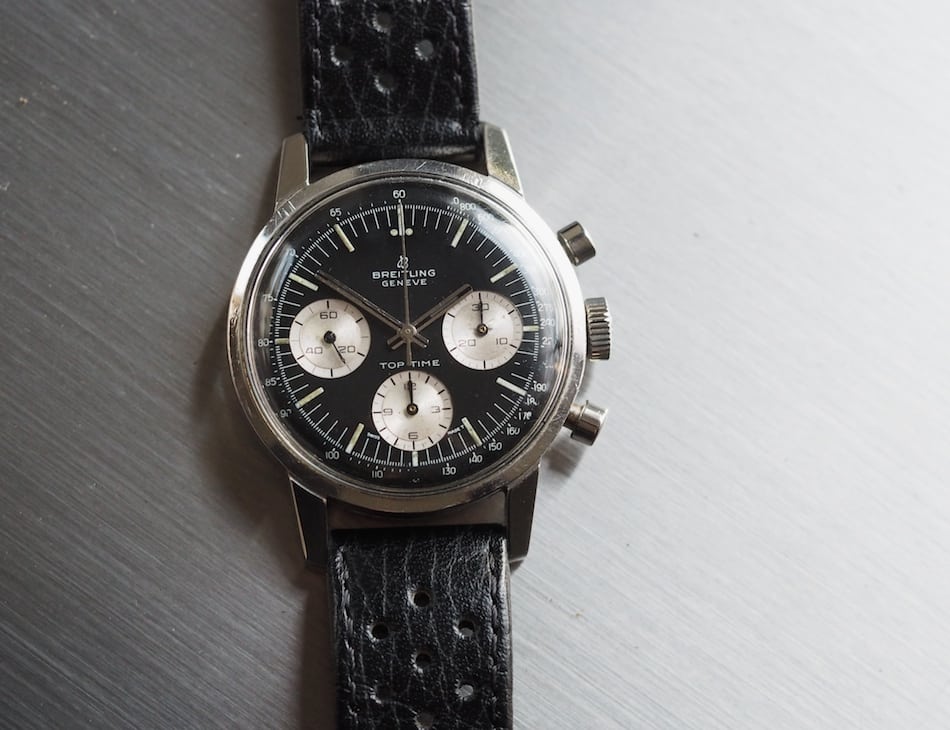 The Breitling Top Time is one of my favorite vintage chronograph lines. I wrote an article several years ago that provided a look at a couple of models that I own. Plus, I added some history. To make a long story short, the Top Time, in its first couple of three-register renditions, was a more sporty stab at chronographs back in the ’60s. They used the high-quality Venus 178 movement complete with a column wheel. I think of them as the Breitling competitor to the Heuer Carrera during the same time. The Top Time, unfortunately, faded out sometime in the ’70s and was only brought back in early 2020. 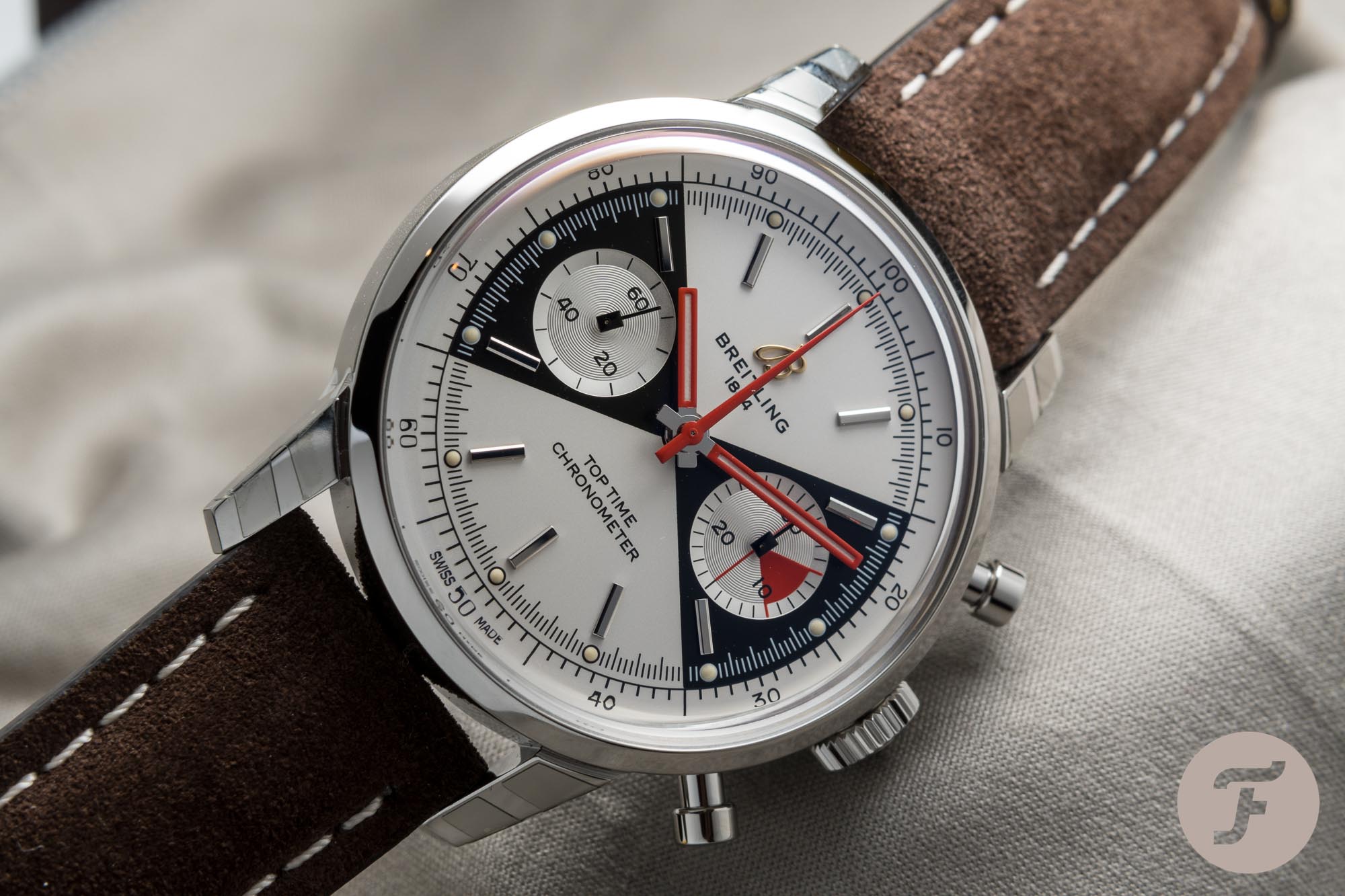 When Breitling brought back the Top Time, it stayed with the same fifty-year-old formula. This meant a sportier piece with more approachable pricing. The latter part was accomplished by using a chronometer-rated Sellita automatic chronograph movement in a 42mm stainless case. The first model was a so-called “Zorro” edition with a bowtie dial. Next, we received a bright collab piece with motorcycle lifestyle brand “Deus.” That watch was incredibly successful and sold out quickly. Today, we saw the latest additions to the Top Time line and aside from the subject matter, there are some nice differences here. 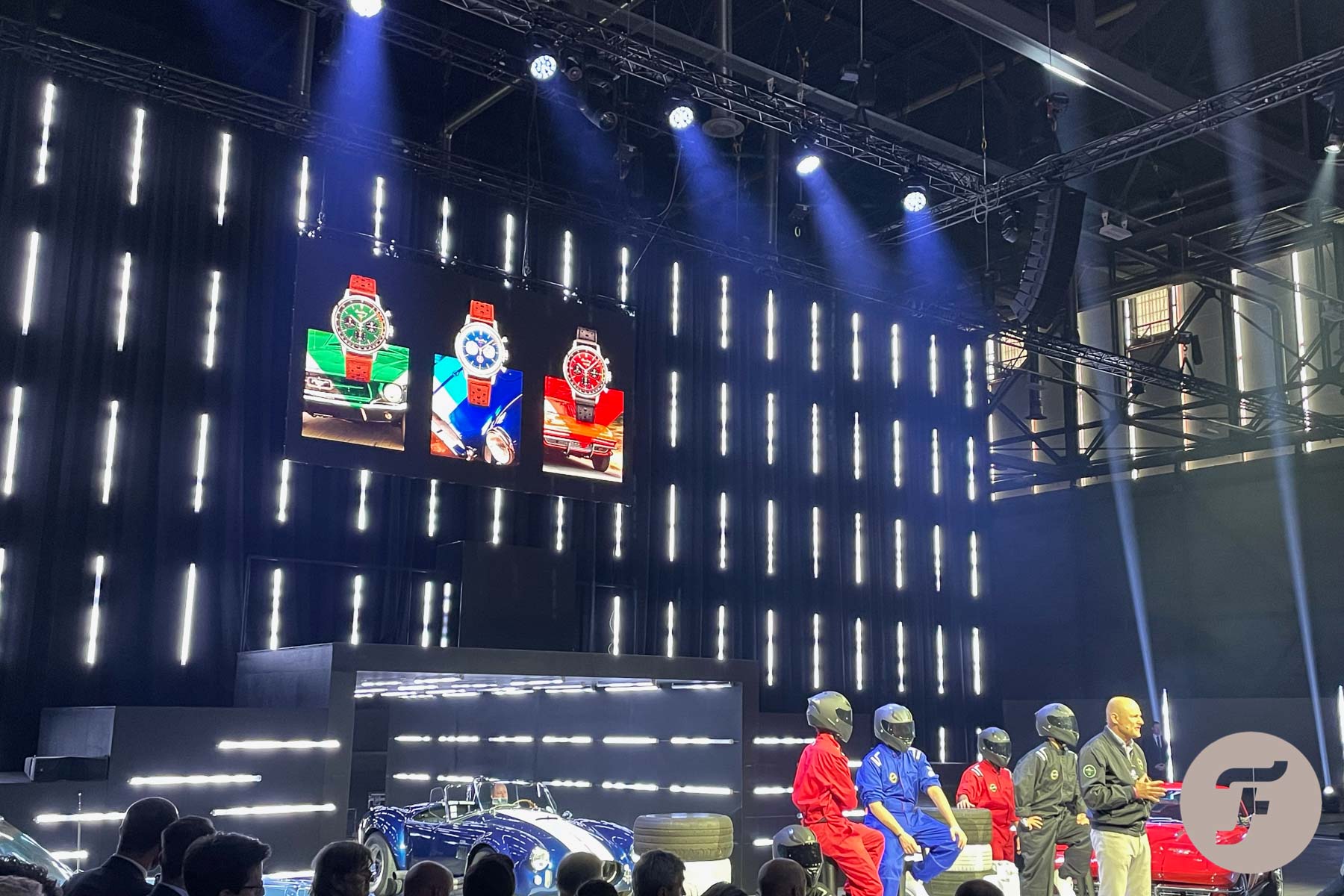 Breitling invited a number of journalists, store owners, and others to the Palexpo in Geneva for the event. I attended with some Breitling Club friends, Tiffany To from Phillips and Lex from our own team. Before heading up the escalator, everyone was handed a lightweight black jacket with either a Corvette, Mustang, or Cobra patch on the sleeve. We weren’t sure what was going to happen, but with Georges Kern at the wheel, we knew it would be dramatic. The lights went down, the music kicked into high gear, and then that sweet baritone sound of a small-block American V-8 filled the huge hall. Squealing tires, that telltale smell of exhaust and carburetors, and a rumble began. Then, a red 427 C2 Corvette Stingray emerged from a tunnel within the stage. It was followed by a 427 Shelby Cobra and, finally, a late ’60s Mustang fastback in Highland Green emerged. Needless to say, it was neat and unusual to see all this American muscle in Europe. After some discussion, we saw the new Top Time models. 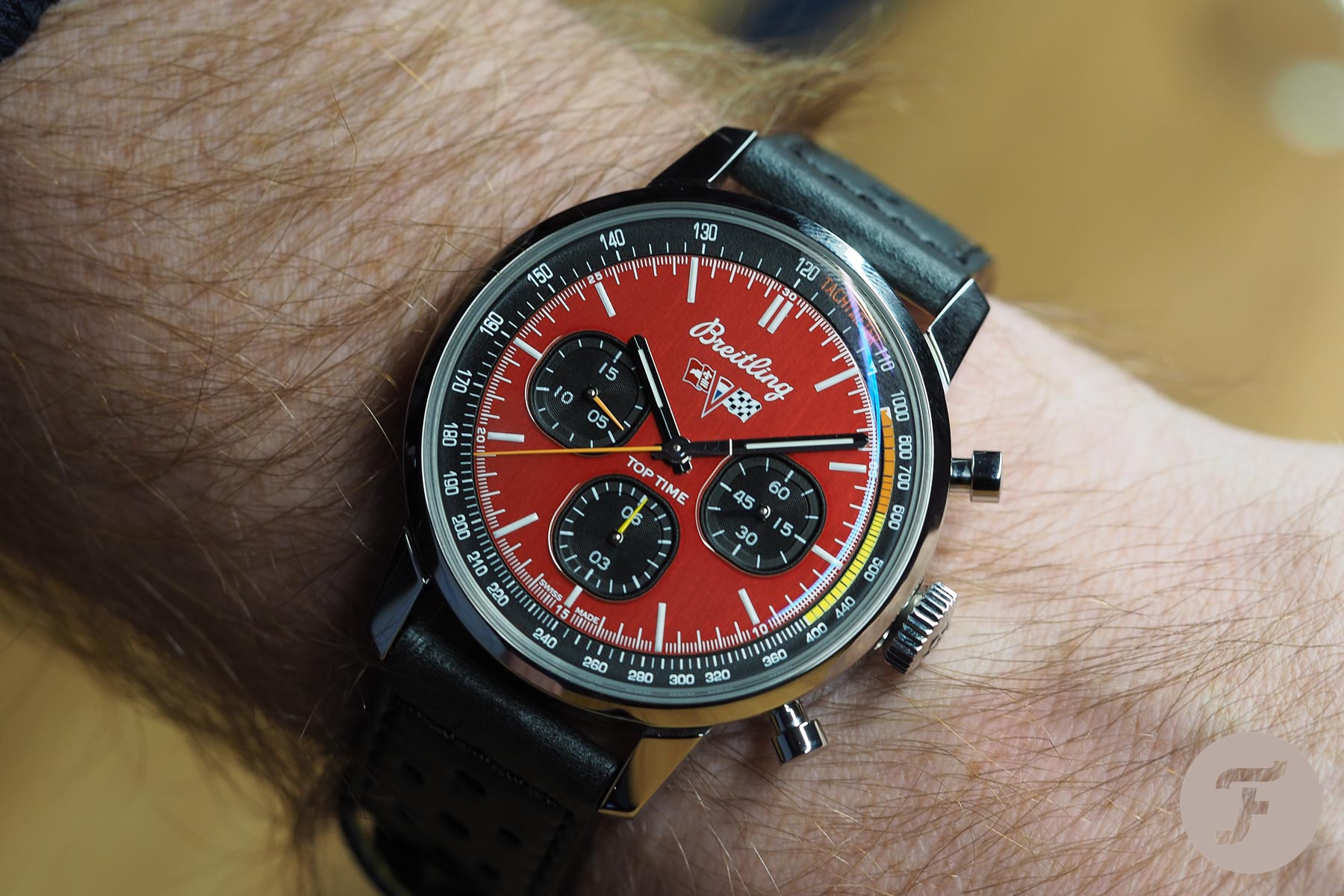 The Chevrolet Corvette, amongst American sports cars, has always been the top of the top. While it has used a V-8 for almost its entire history since the early ’50s, it has always been more expensive than the traditional V-8-powered muscle car. The Corvette was meant to take on Europe’s best. The Top Time ode to this iconic sports car comes in a 42mm stainless case with a black perforated strap and deployant buckle. Breitling chose a unique reddish shade that reminds me of “candy apple red” and it has vertical brushing. As far as details, it has the Corvette crossed flags below 12:00 and three “rounded square” registers that remind us of gauges. 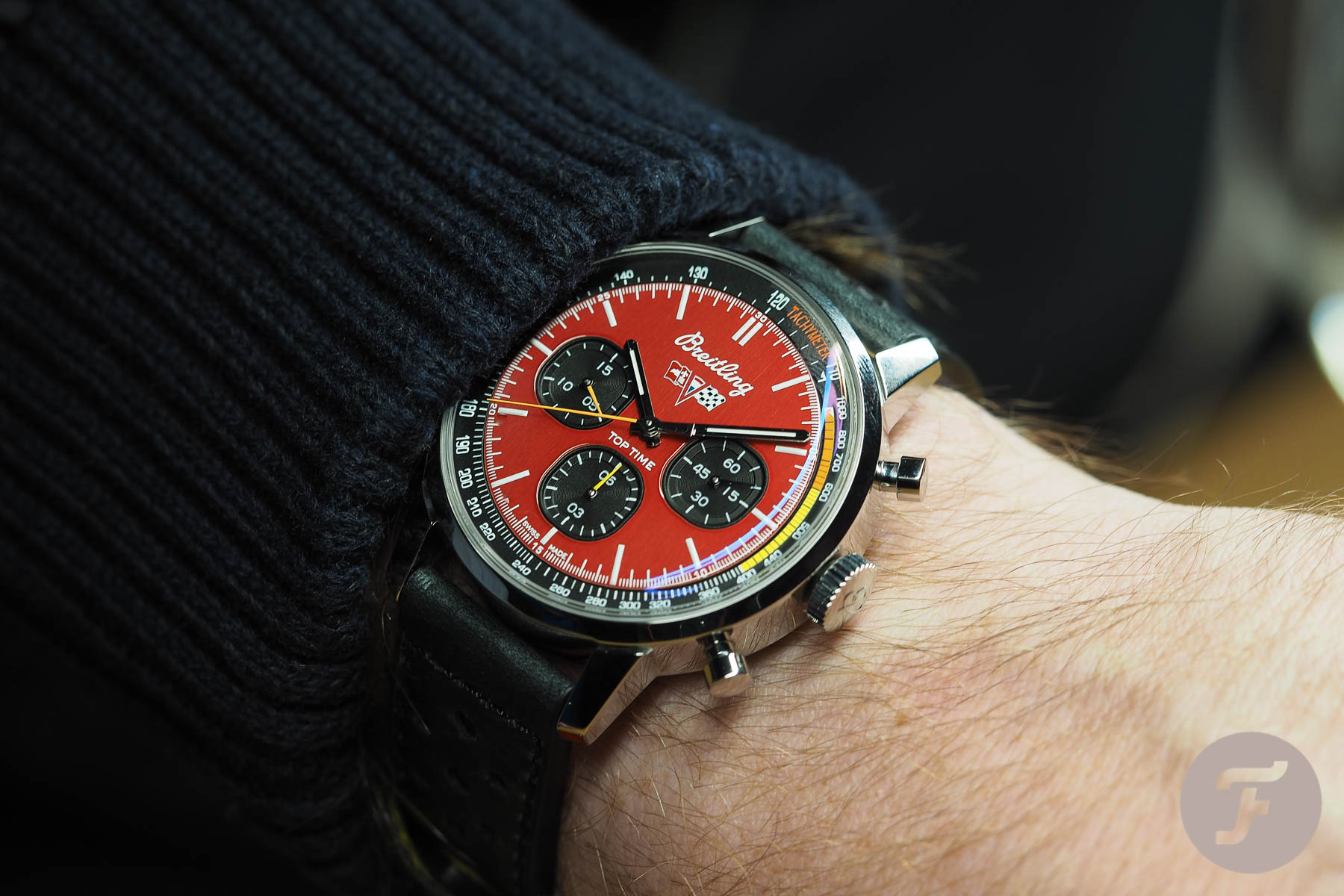 To follow that theme, the tail on the central chronograph hand looks like the back end of an arrow. The watch brings in black, orange, and even yellow elements to help evoke that automotive instrumentation feel. Like all of these models, it is water-resistant to 100 meters and has a solid case back with the logo. Breitling used chronometer-rated Sellita automatic movements on these watches (called the Breitling 25) and it’s the first time we’ve seen three registers on the new Top Time. In-person, there’s a lot of contrast on this Corvette piece and it looks classy on the wrist (thanks to Alex Williams for his wrist-modeling). Like the rest of this capsule collection, it will be made for a limited time, but it is unnumbered. The price is CHF 5,250. 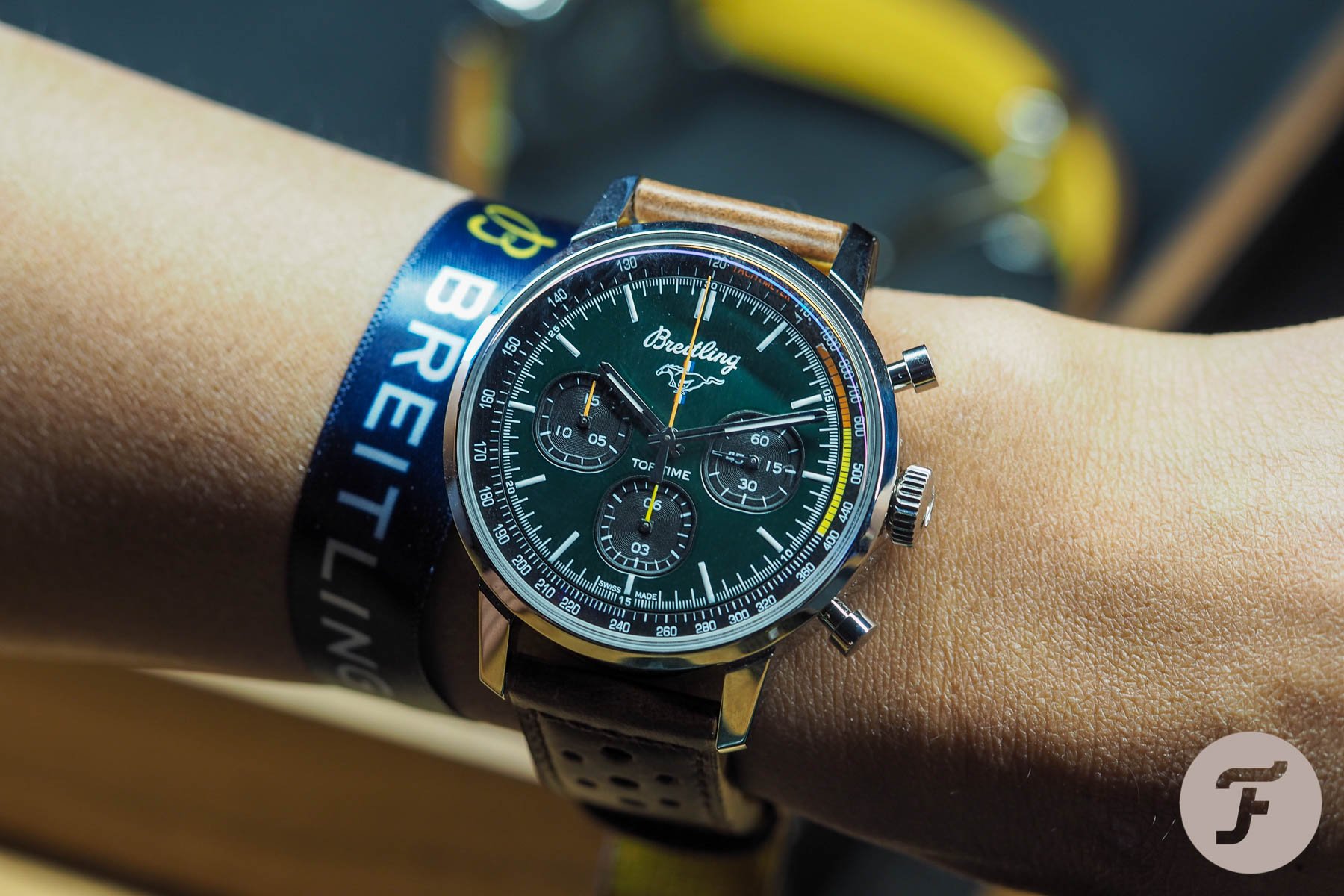 Next up is the Top Time Ford Mustang. I’ve spent ten years in Europe now and, by far, the Mustang is the most popular American car here on the continent. When I talk about it with friends, the “open road” often surfaces in our conversations. It’s also one of the few new American vehicles I see in Germany aside from the Jeep Wrangler or Tesla models. Breitling chose a similar 42mm footprint and three-register layout for its Mustang creation. For the color, they used something very close to the “Bullitt” Mustang that Steve McQueen drove in the famous movie. 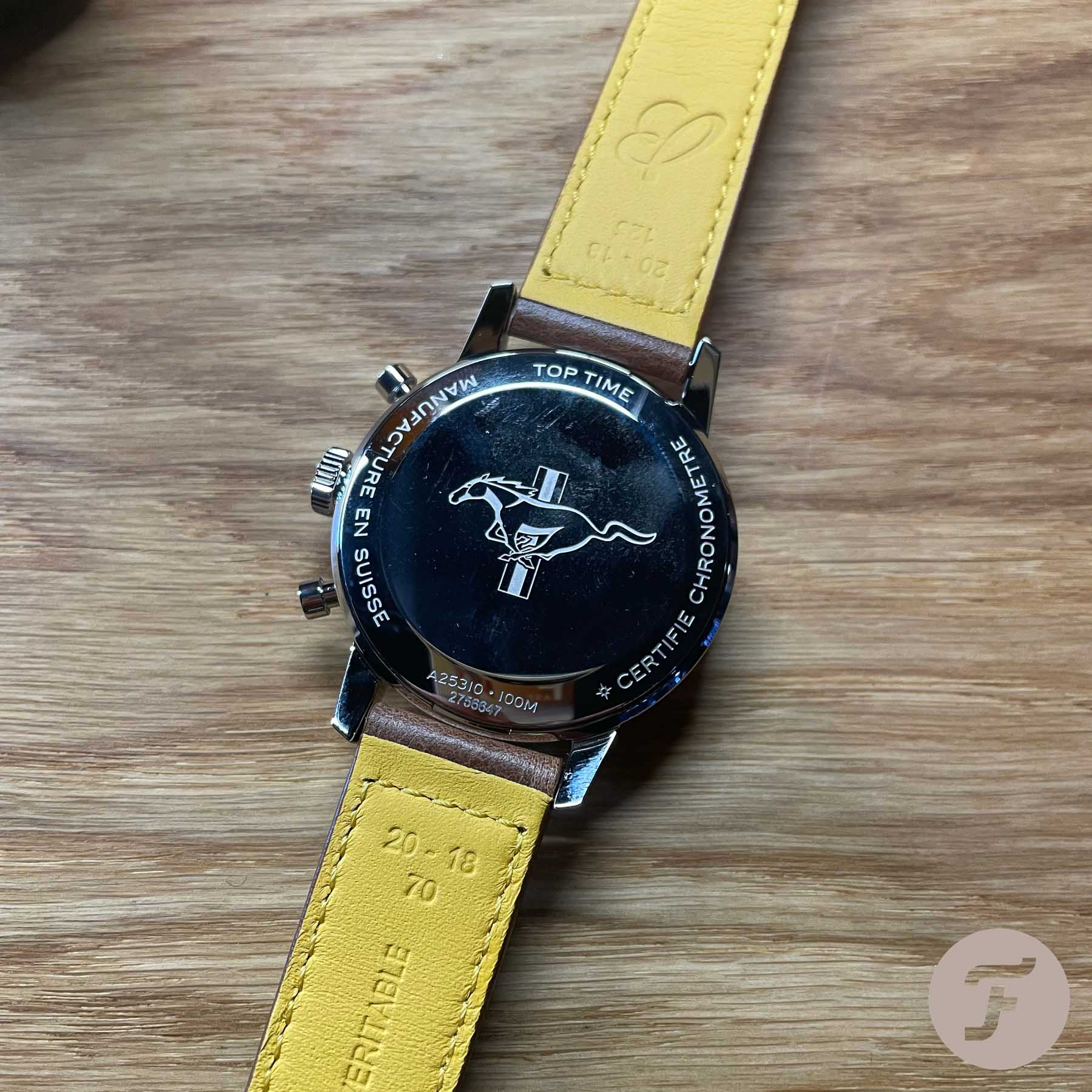 Tiffany To patiently waited to model this piece for me — the line to see the Top Time Mustang was easily the longest. This watch was tough to catch in the light. Much like the car’s paint color, it turns nearly black in dim lighting. Still, the black sub-dials and the hints of orange, yellow, and white keep it fresh. Like the Corvette, this watch sells for CHF 5,250. 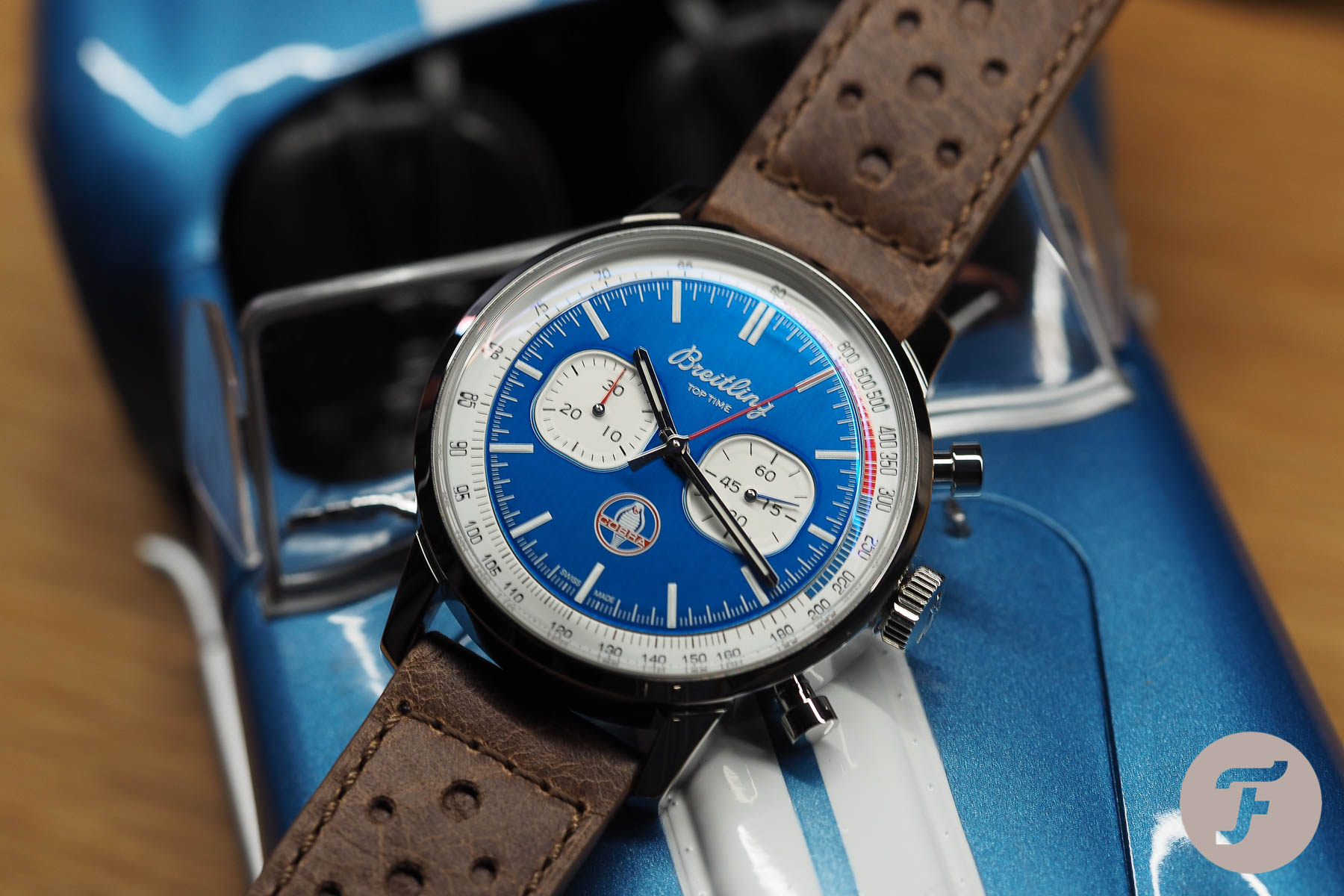 Finally, let’s take a look at the Top Time Shelby Cobra. Despite the overwhelming popularity of the Mustang car, most people I spoke to really loved the blue on the Cobra model. This watch differs from the rest of the collection with its two sub-dials and its 40mm stainless case. The latter is a new addition and really fits my wrist beautifully. The unique watch fits the Cobra because it was a rather unique car in its day. If you’ve watched Ford versus Ferrari, the story of how Carroll Shelby transformed a pretty, but sedate English AC Ace into a fire-breathing track monster is legendary. 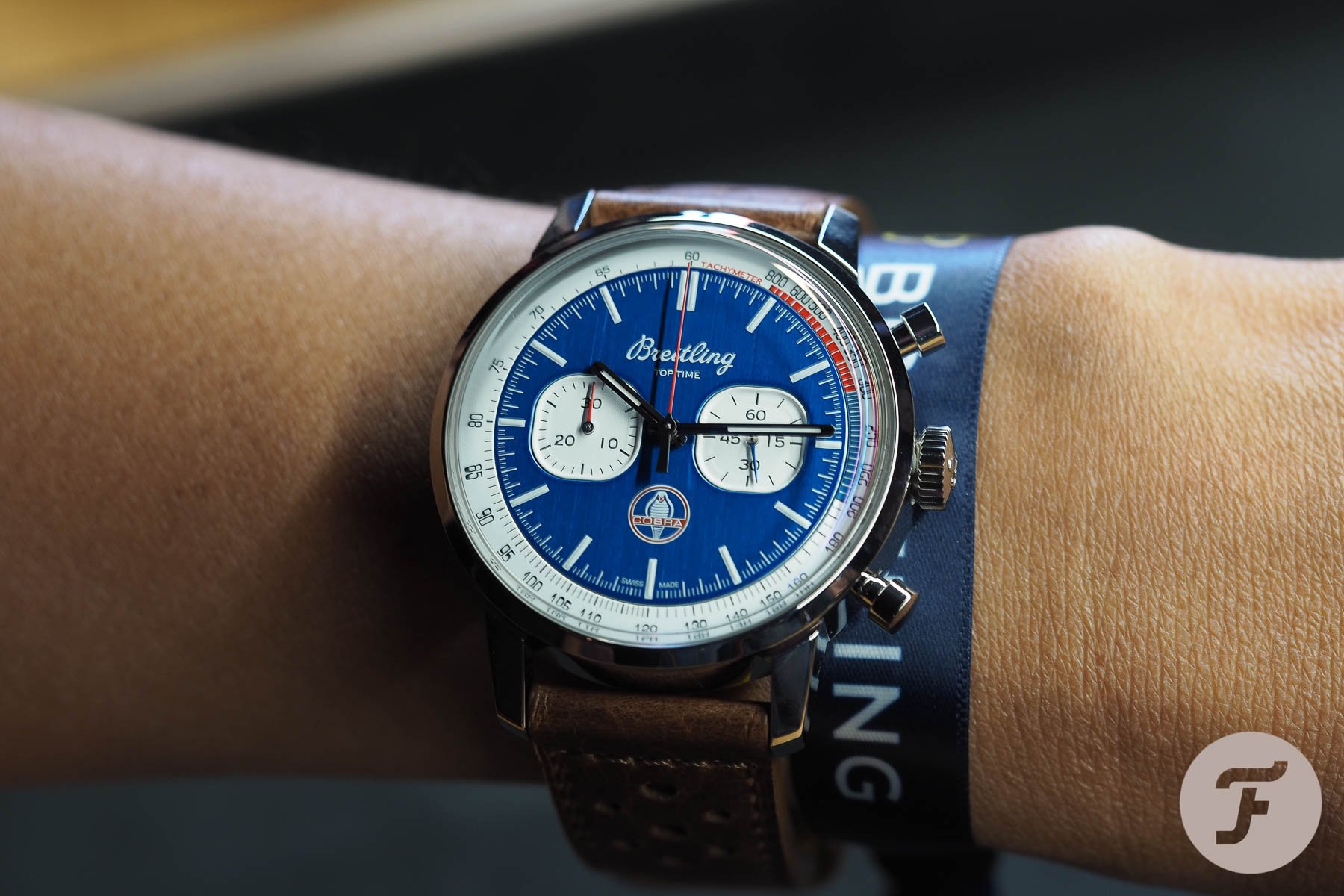 On the Top Time Cobra, blue and white feature strongly to replicate the most typical colors from the car. Red makes its way on the tachymeter scale to help balance out the logo just above 6:00. Like the other models, this one is also for sale for CHF 5,250. 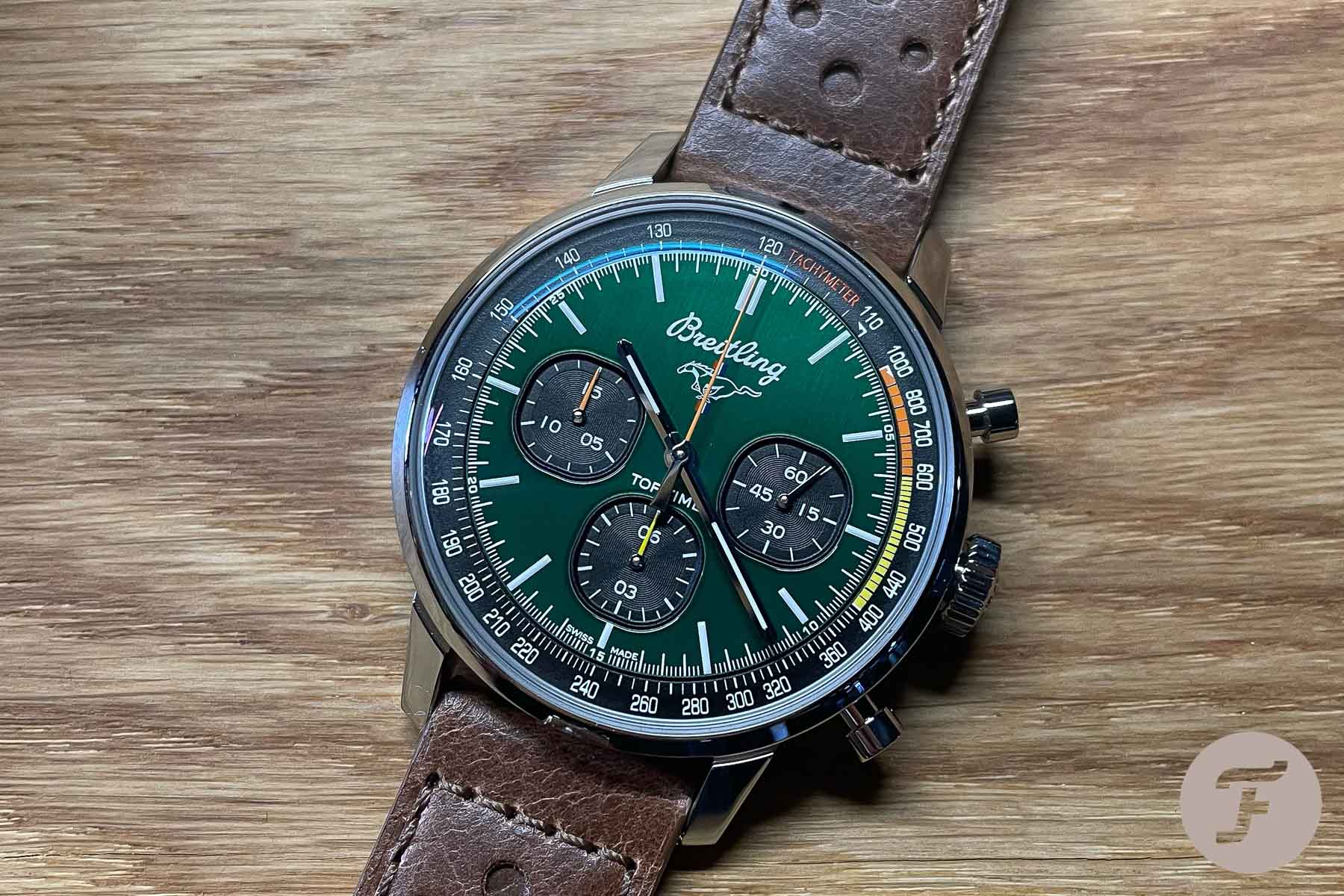 Bringing together cars and watches is tough business. However, car companies often pair up with a watch company that does something overly cheesy. These Top Time models come off well, especially in person, and offer an owner or fan something of interest. The colors are rich, the details are strong, and I like the chronometer rating. Admittedly, I am always curious to see how interested non-owners of these cars will react to car-branded watches. Then again, there are plenty of owners of these vehicles (ok, we will have to bring in the kit car owners of Cobras because the originals are incredibly rare). The other interesting thing is that this is a very America-directed release, which took me by surprise. Like I said, I liked these in person and I really like that there’s a 40mm Top Time case — I’m sure there’s more to come there. The Top Time Classic Car Capsule collection is available now on the Breitling site.