And how to have RCVD back in your display without using Bluetooth.
Gerard Nijenbrinks
comments 17
Share

Tips & Tricks: try these at home! In its most recent Square modules, Casio offers a dual system to adjust your G-Shock’s time automatically. These modules offer the already known radio-controlled Multi-Band 6 adjustment. And now additionally, the latest G-Shock modules offer a Bluetooth time adjustment system, taking the time from your smartphone.

Casio already had experience with radio-controlled watches in its Wave Ceptor models, but radio-controlled Square G-Shocks have been with us since 2008. It was first introduced as “Multi-Band”, effectively receiving five radio signals, and later as “Multi-Band 6”. Multi-Band 6 is a radio-controlled time adjustment originating from a radio time-signal dating back to the 1950s. Whether in Europe, North America, Japan, or in the outer reaches of Canada, Central America, and China, equipped G-Shock Squares can receive a relevant signal and show the correct time wherever you are. In many countries, it also sets itself automatically to daylight saving time. Multi-Band 6 is still used in Square models, like the well-known GW-M5610-1 and the illustrious GW-5000-1, both with module 3159. 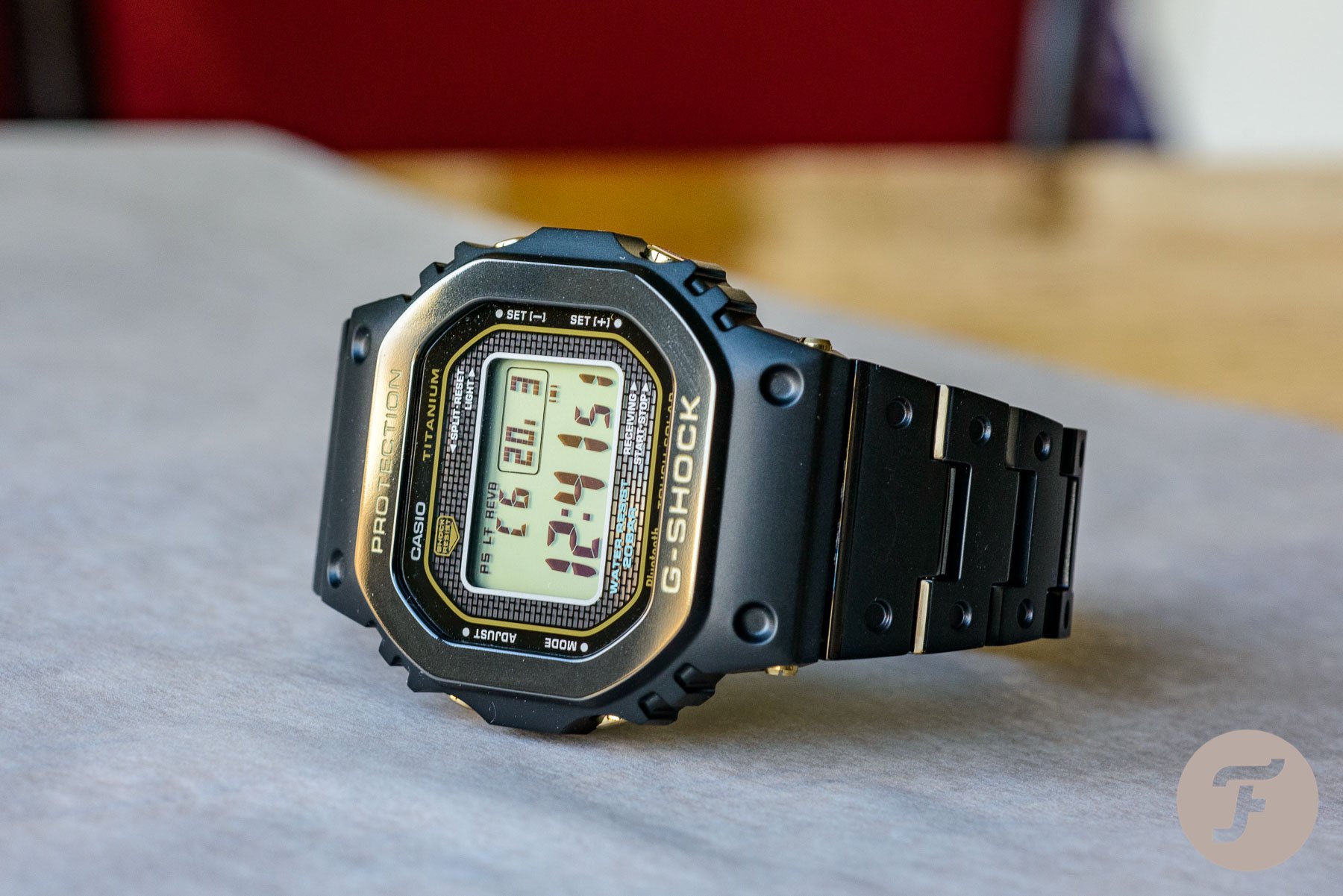 The Bluetooth and Multi-Band 6 RCVD mystery

But now, additionally, Casio G-Shock’s latest modules offer Bluetooth functionality. And besides the many functions that this Bluetooth connection offers, it’s also used to take the — preseumbably perfectly accurate — time from your smartphone. So, how does this all happen in practice?

For the sake of clarity, for now, I assume that you’re in an area able to receive one of the radio-control signals. Don’t worry if you’re not; we’ll get to that later*.

After unboxing your Bluetooth and Multi-Band 6 enabled G-Shock Square, the first thing you should do is to set your home location and get the time right. I won’t detail how to do that, as it’s clearly explained in the instruction manual for the 3459/3461 module. But, what happens is that you force your watch to receive one of the radio time signals, and it will adjust the time on your watch in accordance with your location. To confirm that it all happened, you’ll see the indication RCVD in the display of your G-Shock Square. 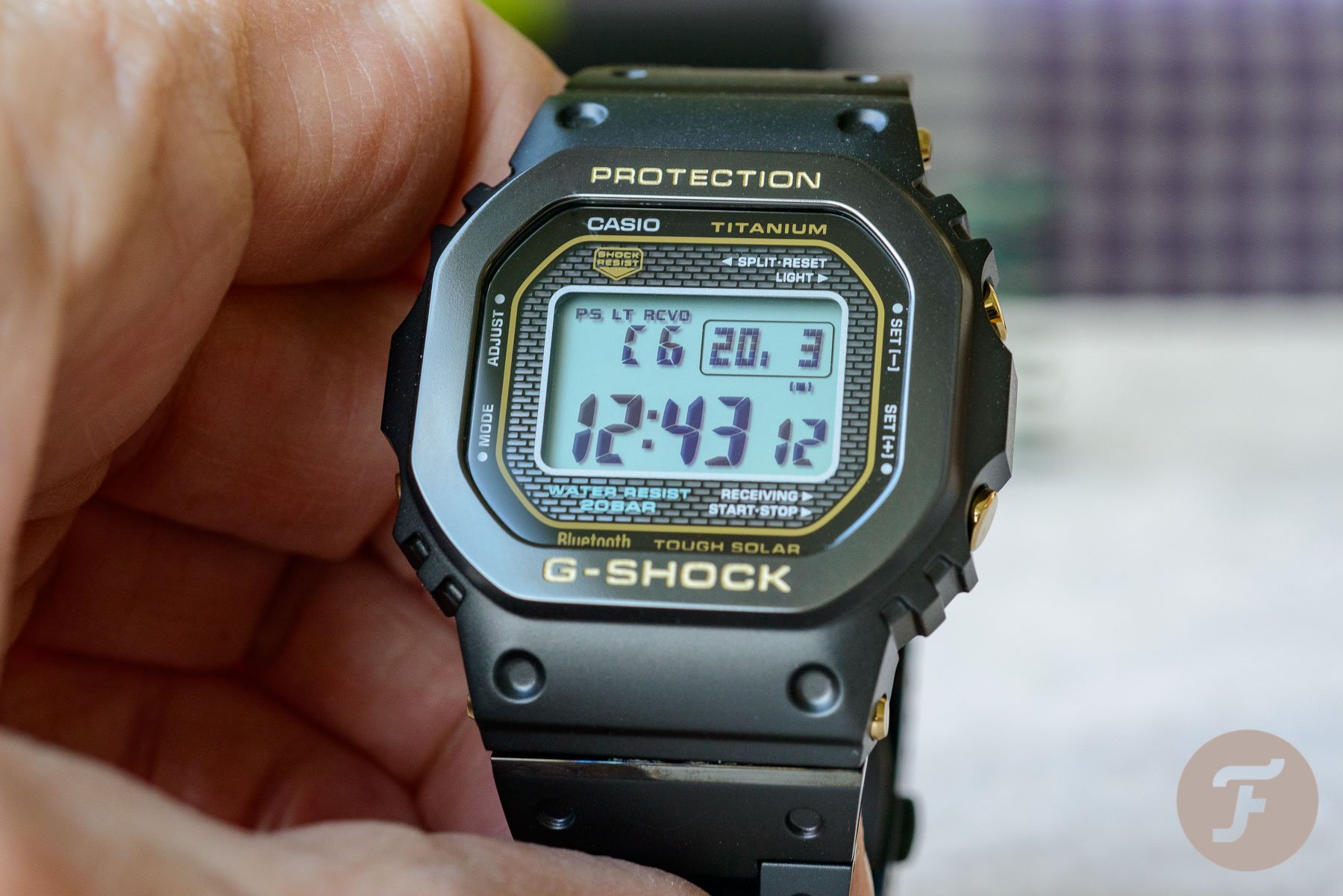 It’s as easy as that. And the good thing is that your watch will look for the radio signal every night thereafter to adjust the time to the exact second. And every time it succeeded, it will reward your watch again with the RCVD indication in the display. Radio-controlled time adjustment is made without any further interactions from your side except for the first manually forced signal reception. The watch is supplied factory-ready to do all this.

The time of your watch will then automatically adjust to the time on your smartphone. Again, as soon as this has happened, your G-Shock Square will be rewarded with the same RCVD indication in the display. Normally, no Multi-Band 6 auto radio signal-receive will be performed if your watch is connected to your smartphone. It’ll start Multi-Band 6 connection again if there hasn’t been successful Bluetooth contact for more than one day. 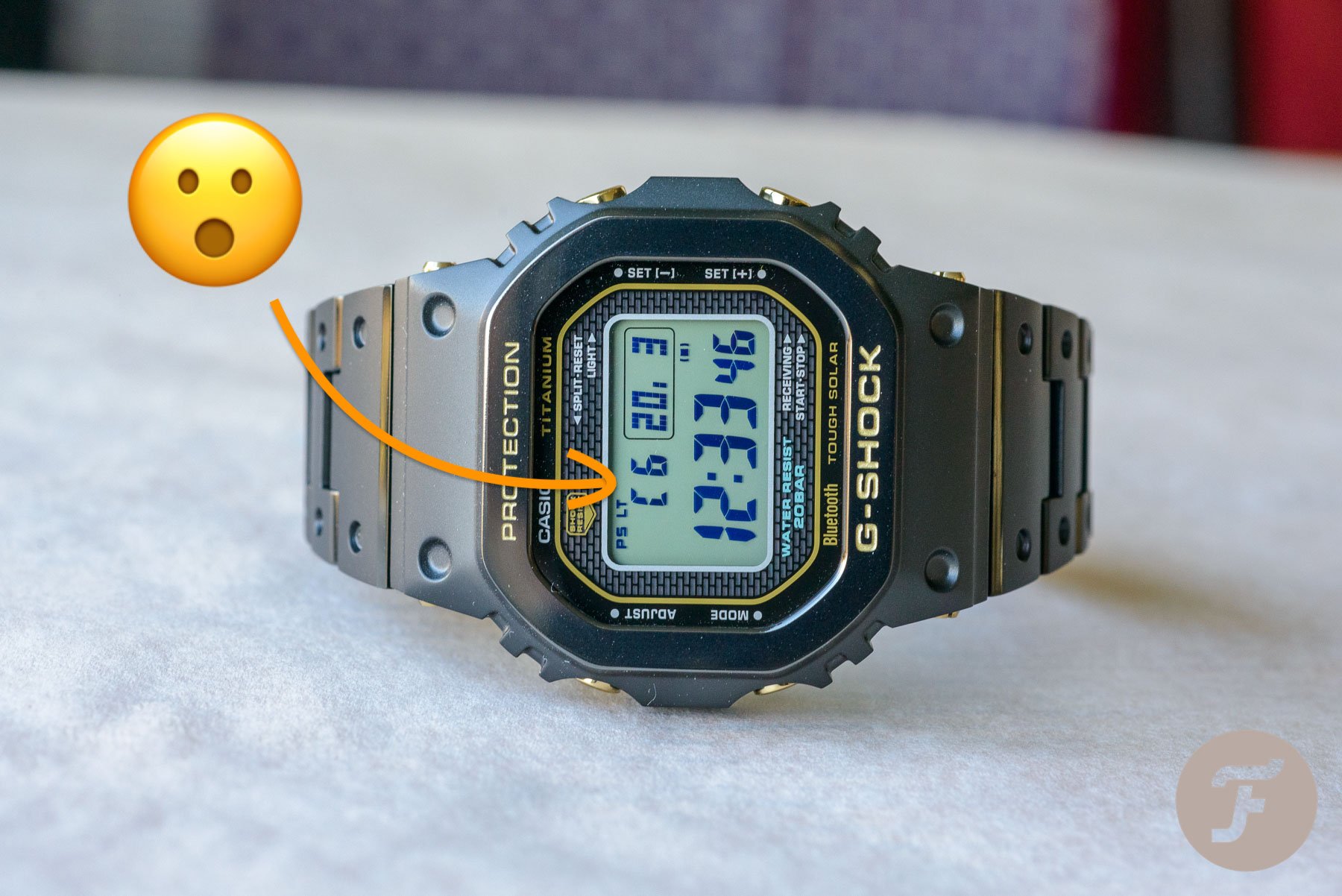 The sorrow of many Bluetooth G-Shock owners

And that’s where we find a flaw. Much to the sorrow of many G-Shock owners, this system can result in the RCVD message failing to appear as frequently as one might imagine. Why? Well, it’s really quite simple…

If the Casio Connected app isn’t running on your smartphone — not even in the background — your G-Shock will not be able to connect to your smartphone. It tries four times a day to connect but will invariably fail unless the app is active. From the moment your G-Shock was Bluetooth connected to the Casio Connected app once, it will try to connect no matter what. Even if you decided not to use the app anymore, deleted it and deleted the smartphone’s Bluetooth pairing. Your watch will still try to connect.

Why does RCVD disappear?

This is why it happens. Your G-Shock receives its radio signal just after midnight or at any time before 5 am (that’s when the radio receiving stops). RCVD shows in the display to confirm. Then, at 6:30 AM, your watch tries to Bluetooth-connect to your smartphone. If that, for any reason (phone is out of reach, the app is not running, Bluetooth on your smartphone is switched off, or you deleted the app altogether) fails, RCVD is removed from the display. This to inform you that the latest time synchronization wasn’t successful. However, only a few hours before, your watch was accurately synchronized by radio reception and will show the exact right time. 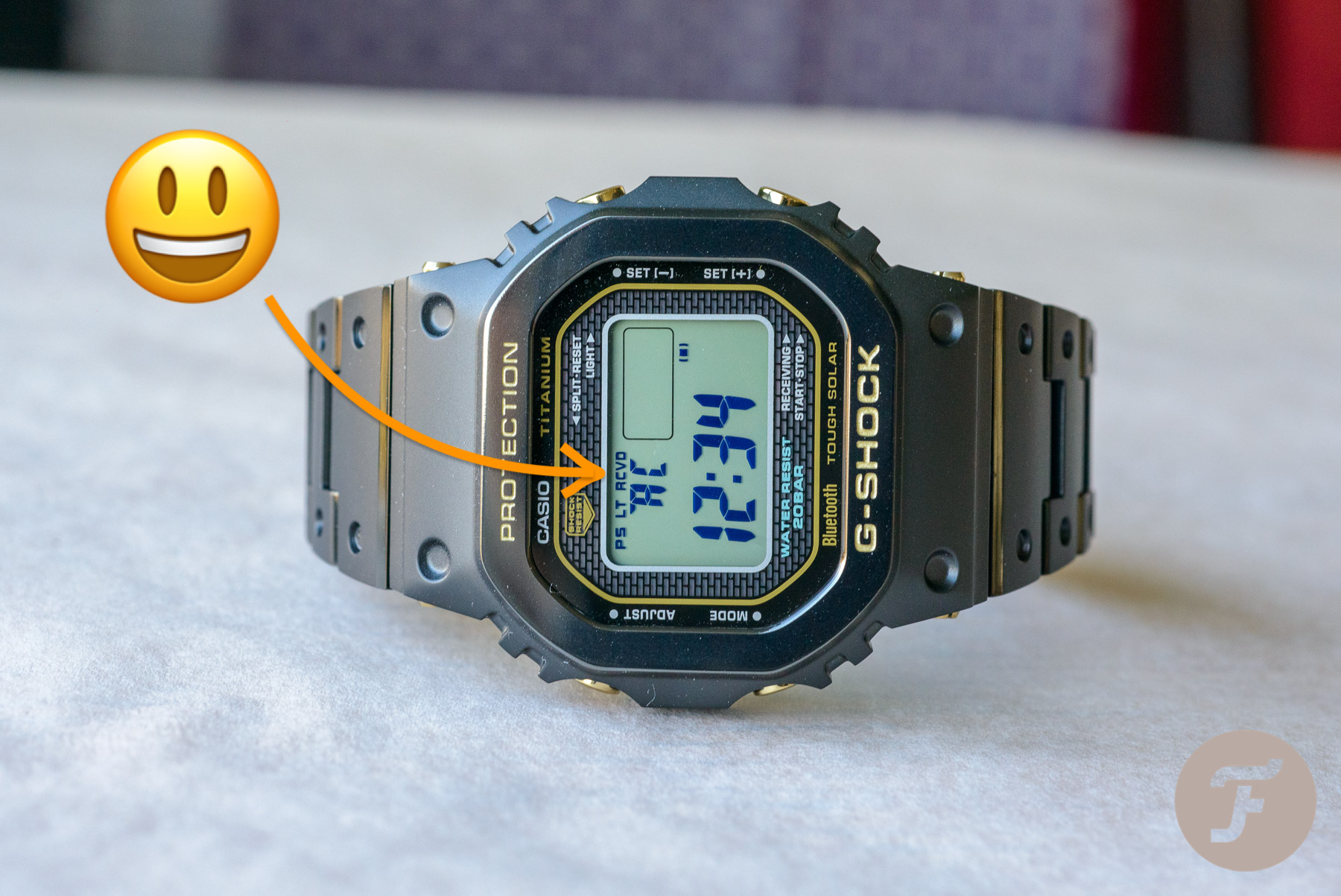 Because your watch won’t be able to adjust the time through Bluetooth at all — caused by any of the above-mentioned reasons — during the rest of the day, RCVD will not show up in the dial. Then, during the night, the above scenario will once more unfold, but you won’t notice it because you’re asleep.

Let’s assume you really don’t want to use the app anymore to synchronize your G-Shock Square’s time. Or, more plausible, you don’t want to have the app running in the background all day. But you do want the confirmation that your watch managed to receive the radio signal to adjust the time. Unfortunately, eliminating the Bluetooth pairing with your watch on your smartphone won’t help. Your watch doesn’t know and will still try to connect. The solution is to stop the Bluetooth connection on your G-Shock.

This, however, isn’t explained and can’t be found in your module’s instruction manual. But, here we are, Fratello to the help!

To stop your G-Shock from Bluetooth-connecting to your smartwatch app — and thus removing RCVD from the display — carefully follow the instructions below.

This sequence will remove the Bluetooth pairing from the watch. Afterward, it will no longer attempt to Bluetooth synchronize with your smartphone until it is re-paired on your smartphone again. Now your G-Shock will only synchronize the time by its Multi-Band 6 radio-controlled functionality and — if successful in doing so — show RCVD in the display. Please note, this sequence is close to totally resetting your watch to factory defaults. And you most probably don’t want to do that because it means losing all world-time settings, alarms, language settings, etc. The difference is the last step. Instead of three, you would hold button (B) for seven seconds when CLR disappears, and ALL shows up. 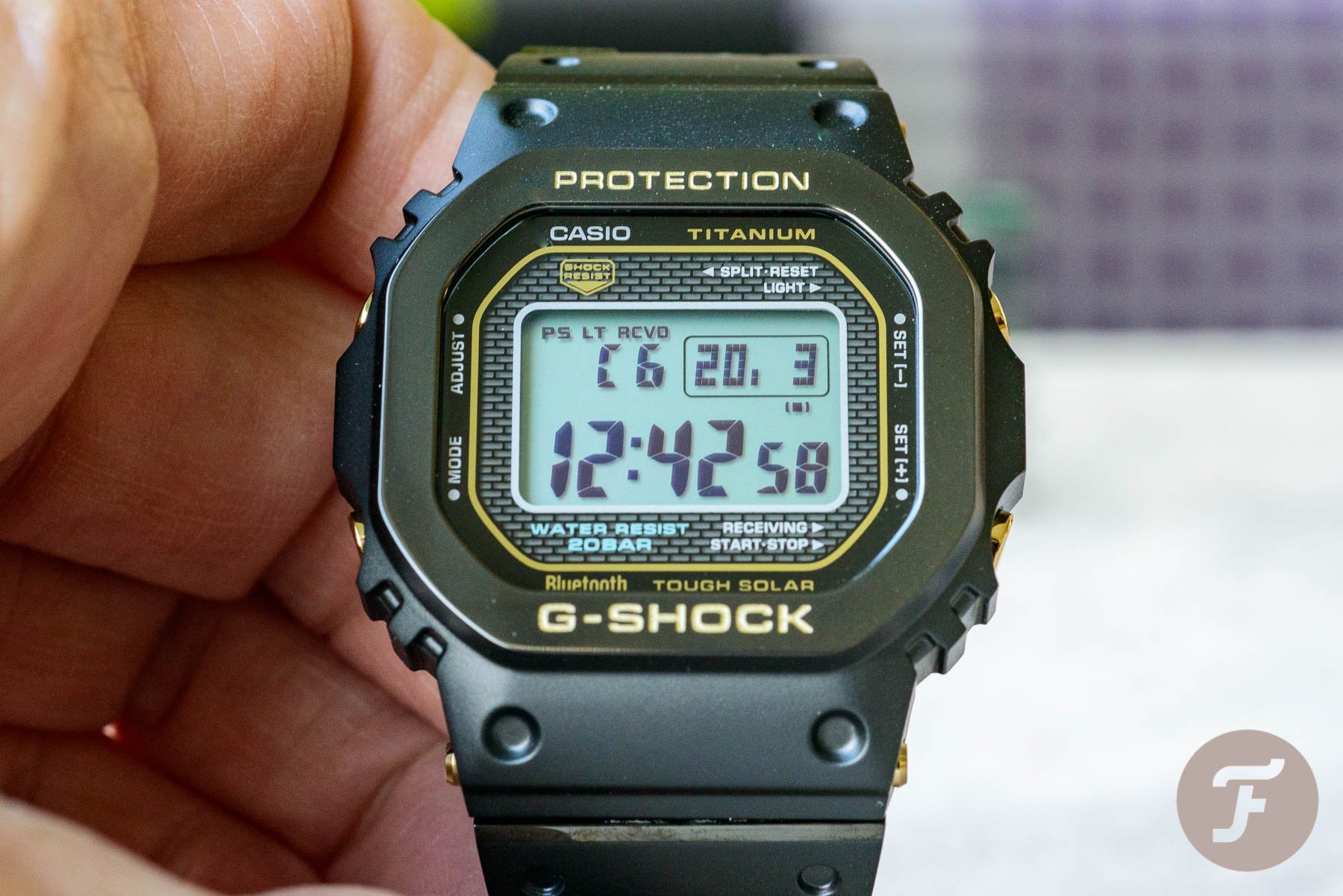 (*) if  you’re outside radio coverage

If you’re out of reach of one of the six radio transmitters, your only chance to automatically synchronize the time on your G-Shock is the Bluetooth connection. Because of this, you won’t be able to have the RCVD notification in the display to confirm receipt of radio control anyway. Consequently, you won’t lose it either in case your Bluetooth synchronization wasn’t successful. In that case, RCVD will not show but it actually means that time synchronization didn’t happen.