Preview of Geneva May 2017 Auctions – Antiquorum

In the past couple of years FIDES, the investment group that owns the Geneva & Hong Kong branches, has been carefully getting this group back on its feet. An interesting development since Antiquorum NY has been completely separated from Antiquorum Geneva & Hong Kong, is the newest divide line has been drawn: the websites have been totally separated. The NY company is keeping the www.antiqurorum.com and Geneva has launched the new www.antiquorum.swiss to differentiate itself as a separate company. I thought it would be annoying, but it’s really not. The Geneva based auction house has also launched its own app and looking forward to seeing how this new independence continues to evolve.

FIDES has also announced the arrival of Romain Rea, a renowned French watch expert, as the CEO for the group. Romain has experience in the watch auction scene having been involved in France for decades. He is also a consulting expert for the historic departments of Vacheron Constantin, Jaeger-LeCoultre and, more recently, Tudor. We have known Romain for years and he will attract fine watches and new clients to the organization, but also wealth of experience, knowledge and passion for vintage watches to the team. With a passion for niche brands, a firm knowledge vintage Patek, Rolex and Omega and his unique and sometimes even peculiar tastes, it will be interesting for us to see how the curation process will evolve for future auctions.

The Antiquorum watch auction, which takes place on Sunday May 14th in Geneva, is comprised of 554 lots (as usual, the most among its peers). They usually hold their auction on Sunday and it was surprising that Sotheby’s, which has been bouncing around dates and staff for a while, had the silly idea to hold their auction at the same time. The result is that Antiquorum will be holding their auction at the Kempinski hotel, as they used to a few years back, instead of the Mandarin Oriental.

On a brighter note, I had a blast looking through watches in my private preview with Julien Schaerer, Managing Director and Watch Expert, here in Geneva. The catalog is large and it includes a fascinating collection of extraordinary and ornate pocket watches, musical objects and decorative items called the ‘Emperor’s Collection’. The collection did not belong to an emperor, but was rather given this name as it was truly fit for one. It was submitted by a Swiss gentleman and belonged to his father, who collected mostly in the 1960’s and 70’s. Although less ‘popular’ today than wristwatches, these historical items have incredible provenance, craftsmanship and some unique decorative techniques, which have almost disappeared today. This is a must see for any true watchmaking aficionado. The two ‘Mandolins’ are expected to be the highlight of the auction as their identical twins are already in museums. The other green ‘Mandolin’ like Lot 223 is in the Hans Wilsdorf collection and the other red ‘Mandolin’ like Lot 222 is at the Patek Philippe Museum. There is also a perfume pistol, Lot 227, which is breathtaking as well.

Antiquorum presents one of the widest variety among watch auction houses and covers several niche markets, which makes it fun and interesting to view and learn about.

I went through piece by piece over a few days to bring you some of my favorite wristwatches from the catalog. Also a little note that might help with the understanding of the prices I discuss is that the Swiss Franc (CHF) is pretty much at 1:1 with the US$.

Usually, I am not a fan of ‘two-tone’, gold capped or gold plated watches. However, there is nothing ‘usual’ about this watch. First, the teardrop lugs, tropical moon phase disc and mix of pink gold surface and steel as well as the mint condition are eye catching. Also, this timepiece is powered by a Valjoux 88 caliber which is even more complicated than the Valjoux 72C (Chronograph Triple Calendar) as it also has a moon phase indicator. The pink gold plates are welded onto the top of the bezel and lugs giving a unique effect to this case. What does a column wheel chronograph triple calendar moon phase cost today? A lot more than this estimate! I feel there is a lot of value here and sits nicely on the wrist even at 35mm thanks to the elongated teardrop lugs. 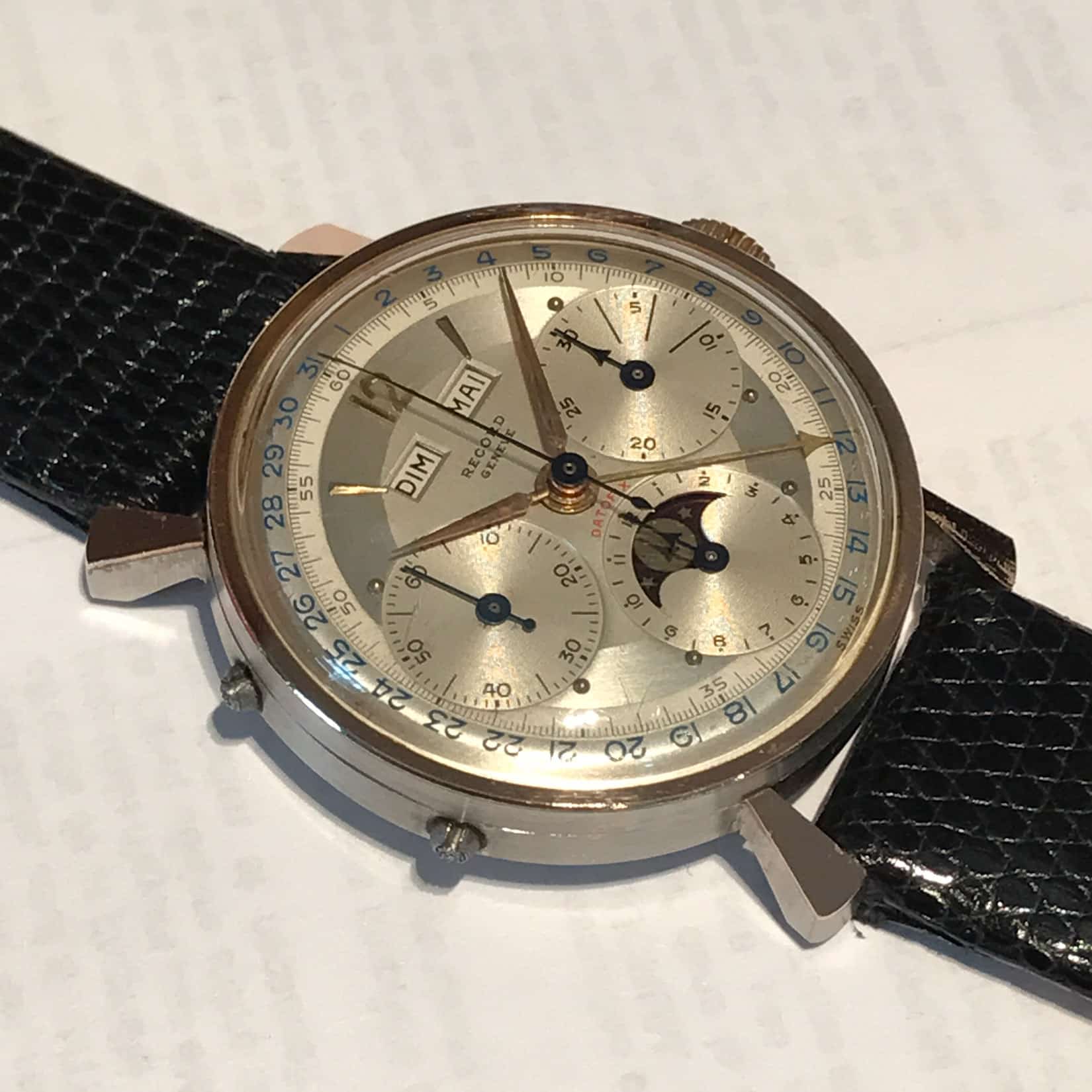 The Arithmo was developed in the 1940’s for use by mathematicians and scientists using logarithmic tables. Since we are neither, we won’t venture an explanation on how it works exactly. The slide rule function had been used way before, but on wristwatches this was a novelty at the time. We are more familiar with Breitling’s use of the slide rule for pilots, but the idea is the same. These were shortcuts to make quick calculations well before the electronic age of calculators. As with most vintage tool watches today, their initial purpose (such as diving or timing races) are obsolete. However, they offer the wearer a chance to have a piece of history on their wrist today. Again, gold and steel, I know. However, there is must be a circle of aficionados for these 42mm peculiar watches considering what the last one (but with luminous hands and dial) sold for at Antiquorum Geneva in November of 2016 (Answer: CHF 10,000 including premium)! It had a very similar estimate of 1,200-2,200 Swiss francs. 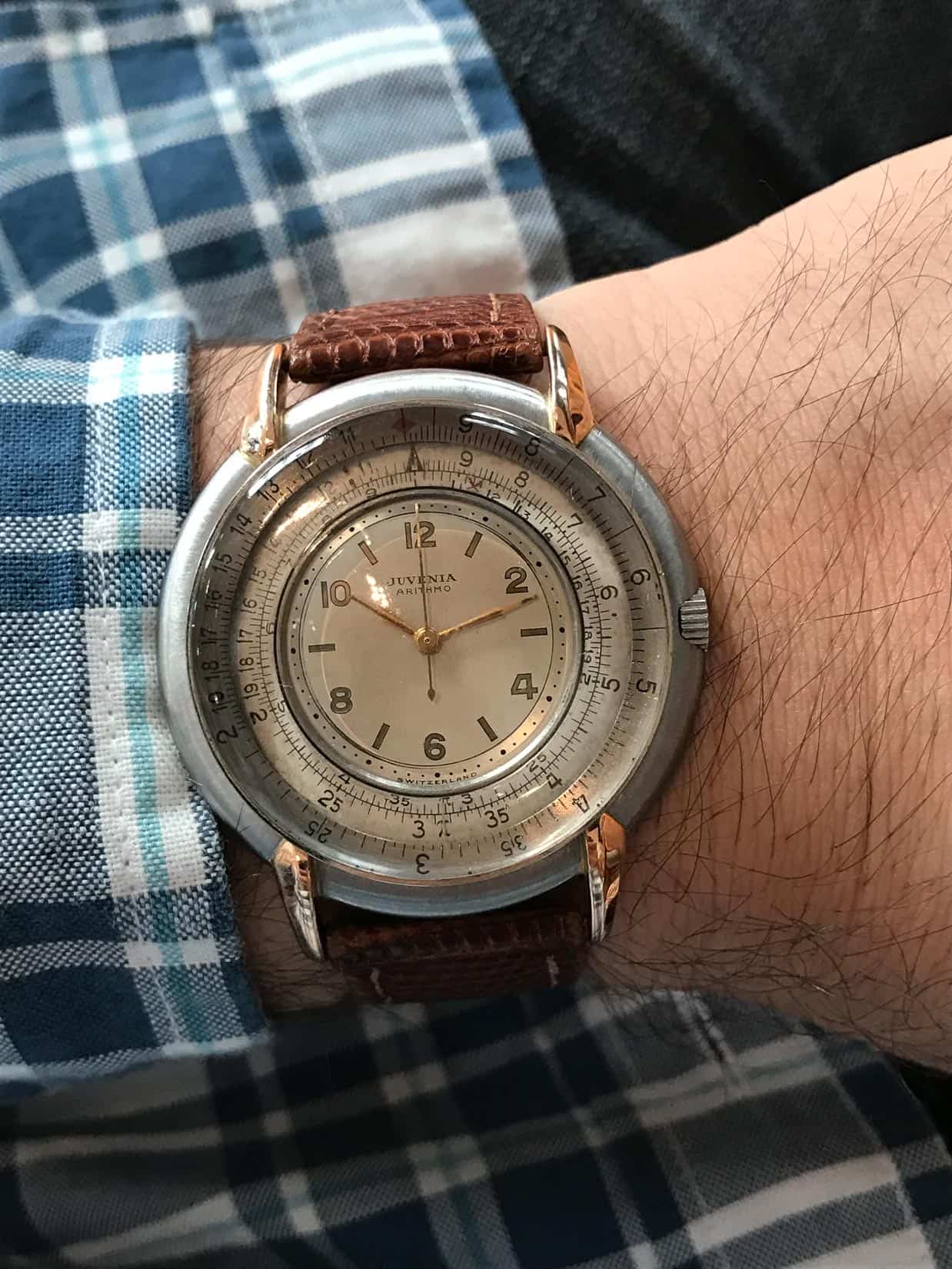 So, what happens when you put a Valjoux 72 movement into a Hugenin Freres case, with a Singer dial and a Gay Freres bracelet? Magic, that’s what! These 1960’s Universal Genève Compax chronographs, known colloquially as the Nina Rindt (white panda dial) and Evil Nina (black reverse panda dial and red chrono seconds hand) have created quite a buzz over the past few years. By buzz, I mean prices have shot up like crazy. Whether that’s cooling off remains to be seen. In the meanwhile, I personally plan to have my paddle up on this lot, but most likely will get left in someone’s rearview mirror. That said, I wonder if the internet bidding will have any bugs to sort out for this auction on the new website. We will see. 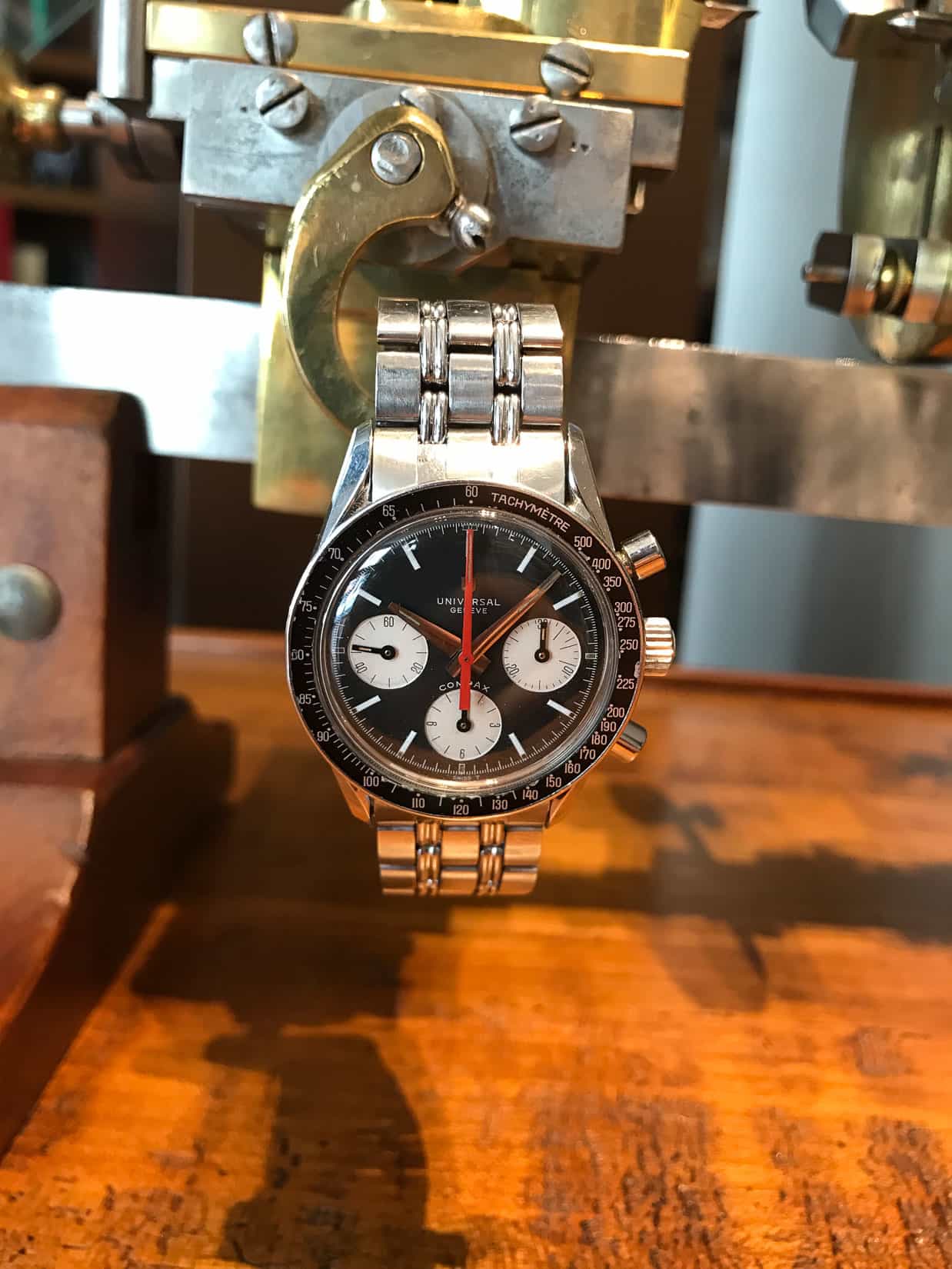 I distinctly remember regretting not buying the one that sold at Christie’s in November 2015 for CHF 4,375 including the buyer’s premium. I think that price point has sailed away.

I do admit this watch was underappreciated and undervalued for years. It comes up so rarely for sale in good and original condition that it was due for a price adjustment. Black dial, screw back steel case, signature tonneau shape and a wonderful history linked to the Calypso make for a pretty killer watch. Collectors are getting behind Aquastar and there are even rumors of an Aquastar GTG in Geneva during the auction weekend.

I wouldn’t be surprised if this one hit its high estimate. 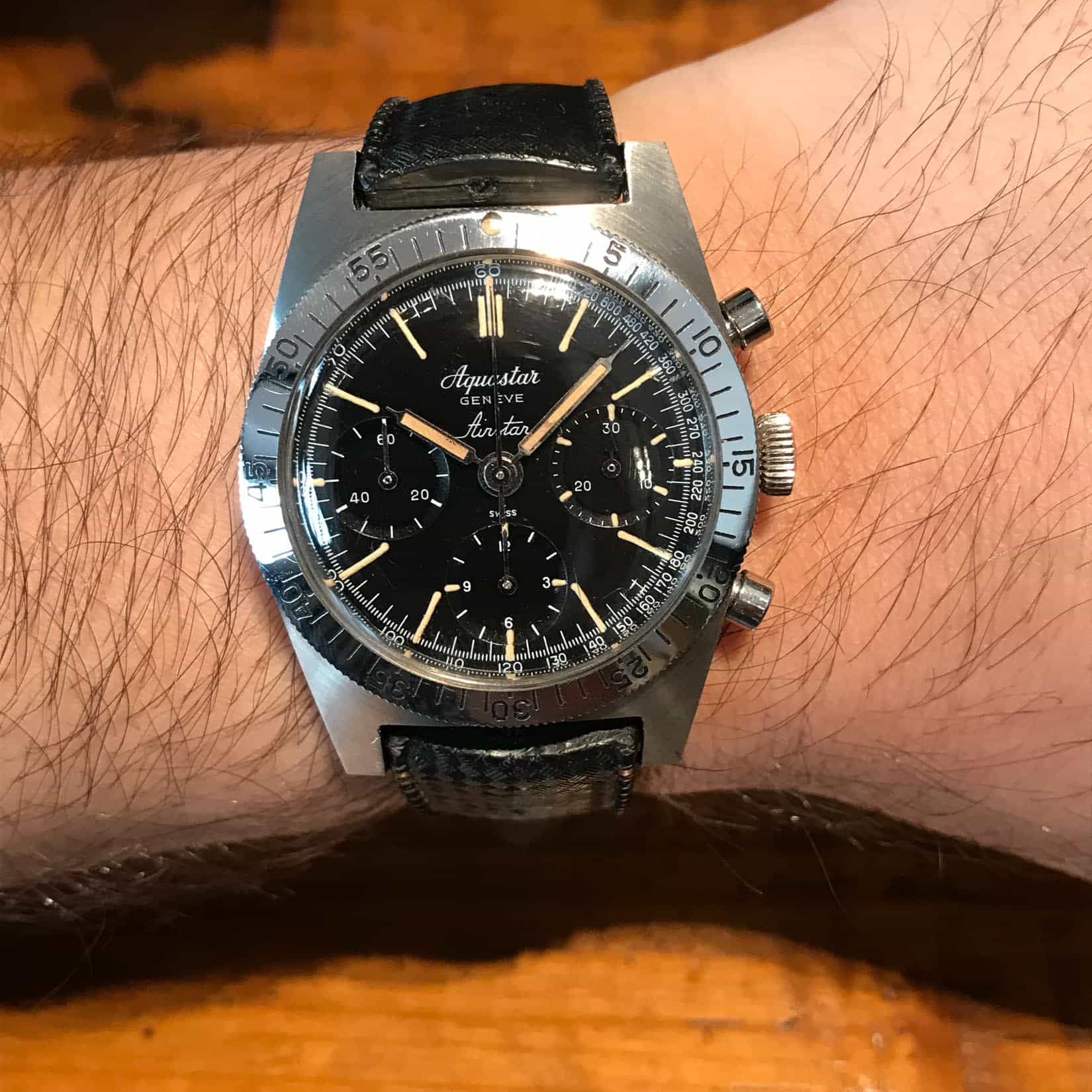 If I had one gold Patek Philippe hour/minutes watch, the 2570 would be it. The gold version of the famed 3147 in stainless steel, rarely pops of for sale. We do see the seel 3147 from time to time, but rarely a 2570 in gold.

The dial has ‘Amagnetic’ on it, which, much like the IWC Ingenieur, Rolex Milgauss and Omega Railmaster, indicates that it has anti-magnetic properties. There is a soft metal cap between the screw-down case back and movement, the dial is thicker and the movement has a beryllium balance. This model remains refined as a chic 35mm gold Calatrava on the exterior, but has a highly resistant interior. 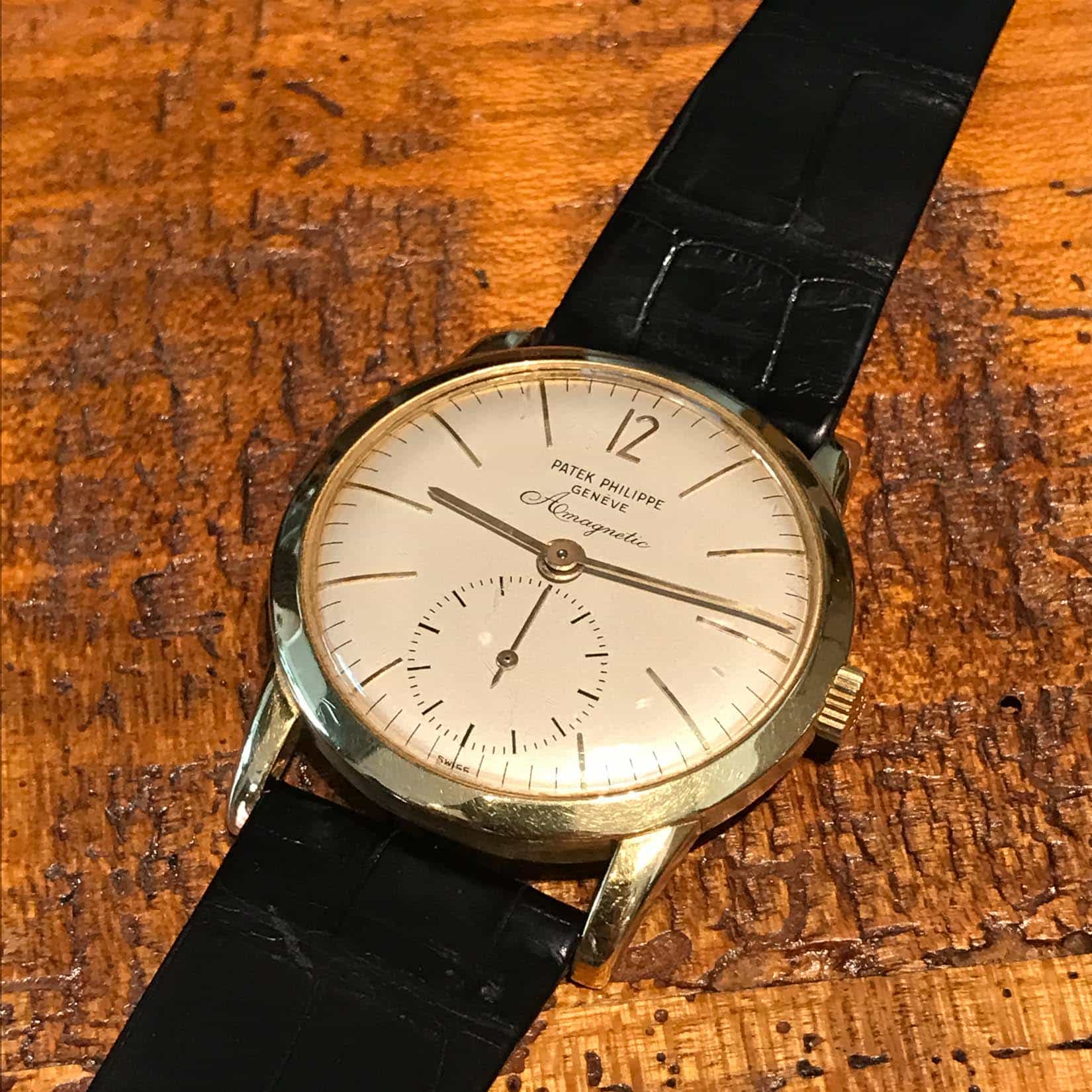 What a cool story! This watch comes directly from the Comex diver Philippe Jeantot after his successful dive in October 1977 to 501 meters. After this successful record-setting dive, the watches were sent to Rolex and engraved and then given as gifts to the 6 divers. If that wasn’t amazing enough, Mr. Jeantot continued his maritime feats after diving and participated and won the first BOC challenge which was a solo round the world boat race with stages. Not only did he win all four stages but also broke the previously held record in 159 days and 2 hours. He then went on to organize and create the famed Vendee Globe race which was the non-stop version round the world race. This is the third of the 6 Janus IV to be offered at auction and the first of only two to have gone down to 501 meters. I think it is also safe to say the others weren’t sailed around the world and setting sailing records either. As if stratospherically fascinating provenance wasn’t enough, the watch is also stunning. The dial luminous material has aged naturally to a rich amber color, the original domed acrylic crystal is worn yet screams original and we see what appears to be an unpolished case. Thank you, Mr. Jeantot.

On a side note, I consulted some French Rolex/Comex experts and they indicated that there has been a non-authentic engraved Janus IV Sea Dweller for sale in France for a while. Avoid that one. They also happily confirmed this one at Antiquorum is 100% original and not to take into account the asking price of the other one. This watch, according to the experts, should hammer at CHF 100K+. 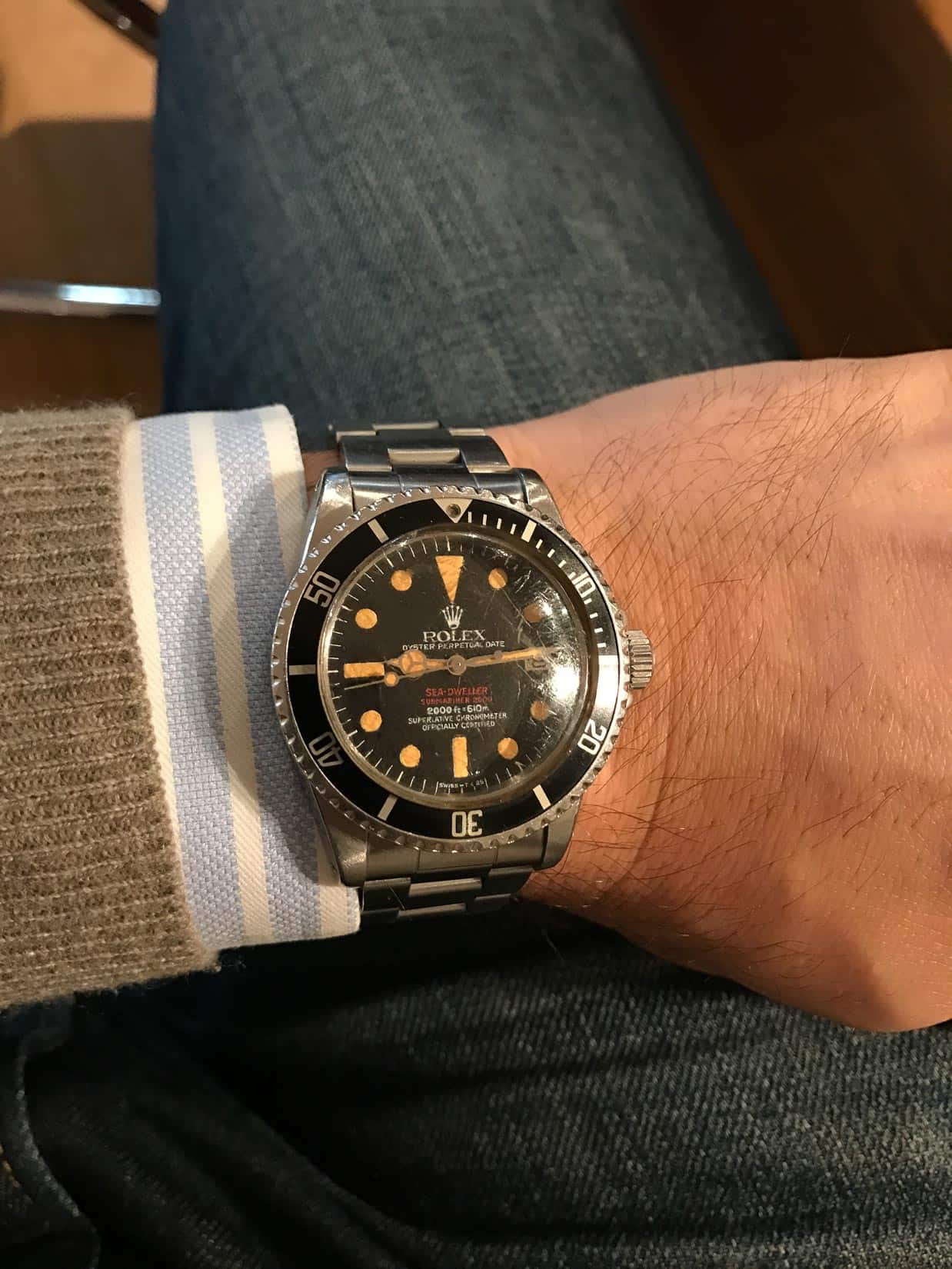 A ‘clamshell case chronograph’ typically refers to an early 1940’s waterproof chronograph wristwatch case. These cases are held together with four screws in the back of the lugs. With several brands (in fact, dozens) using this patented technology at the time from Swiss case suppliers, there is a growing collector base and aficionados for these. Usually, the black gilt (gold or silver printed) glossy (enamel) dials are the most sought after. Why? Rarity and aesthetics. If I would have told you this estimate three years ago, you might have laughed. Today, it seems pretty much on the money. Did I mention it is 38mm? 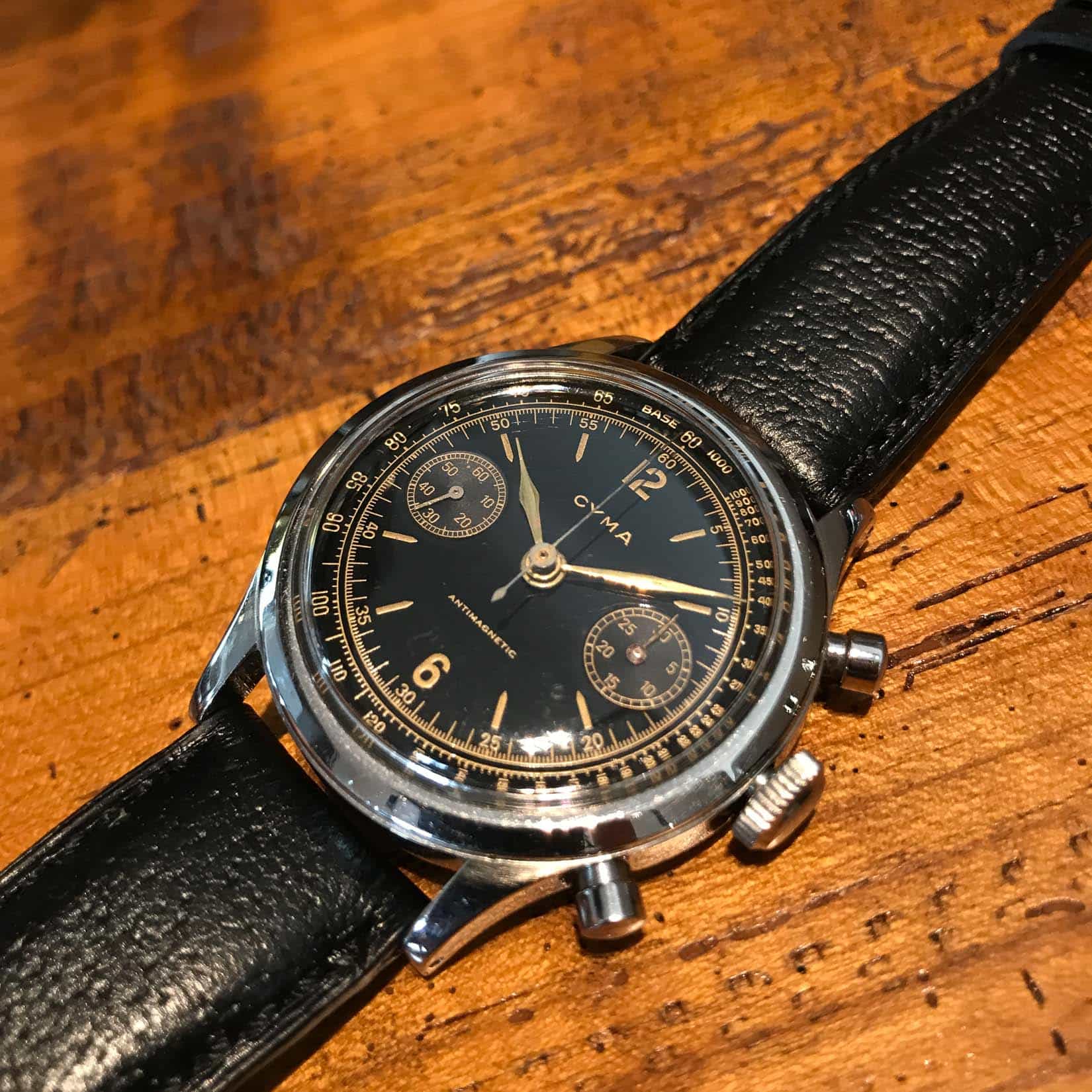 This lot is similar to the Cyma in size, but it does not have the ‘Clamshell’ case, just a regular snap back. On the other hand, it does have luminous hands and hour markers. That makes this watch slightly more valuable, in my opinion. The low estimate is the same as the Cyma but the high estimate is CHF 1,000 more. Apparently, Antiquorum would agree that it is potentially more valuable. It is harder to measure prices on these than later vintage as it is traded more privately and not as often. In any case, there is consistently more demand for black gilt dial stainless steel chronograph in good condition. 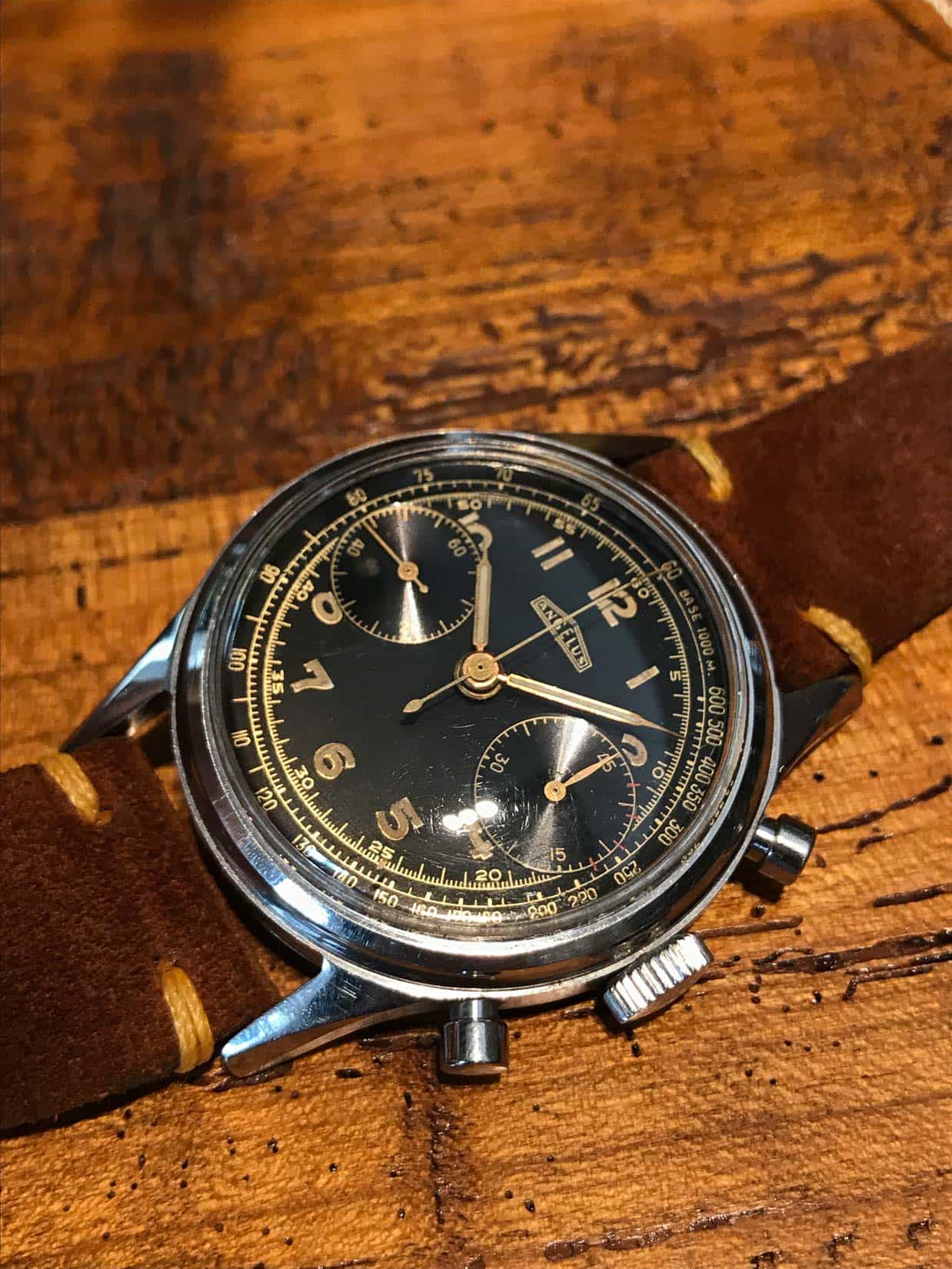 The particularity, besides the two visible column wheels, with the Valjoux 55 VBR split-seconds caliber is its size: a whopping 40mm. This means that it is fitted into large 43-44mm wristwatches. In the 1940’s that was the size of a wall clock (maybe a slight exaggeration). For example, the Rolex 4113 (Sold for CHF 2.4 million at Phillips, May 2016) or maybe the Universal Genève A. Cairelli with 24 hour dial (Sold for CHF 197,000 also May 2016) both have the same base caliber although the execution varies slightly from brand to brand. The Rolex has two pushers, versus the usual mono-pusher found on this caliber and the UG has a 24 hour dial. However, this Gübelin has never been seen at auction and, to be honest, I have never seen one before. I would venture to say that the brand I am most commonly used to seeing with this Valjoux 55 base is Minerva, but even those rarely ever pop up anymore. I think the estimate is fair considering rarity and beauty of this one. With unique watches, it is very difficult to predict a result. There is no real precedent and comparing brands often doesn’t translate exactly. The estimate is in the right ballpark, but part of the excitement with auctions is that unpredictable result on the day the sale takes place. 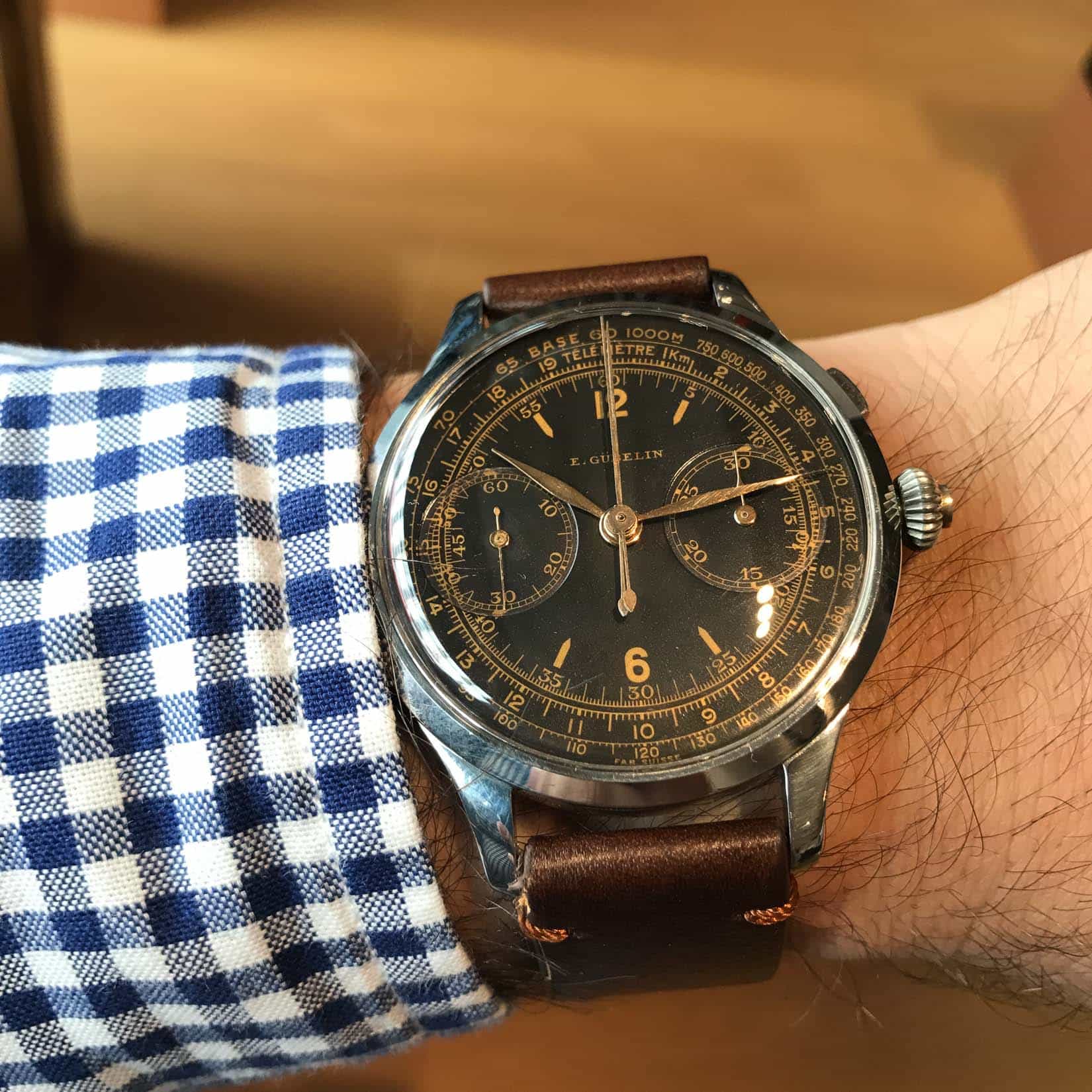