A Grand Seiko is still quite uncommon in this part of the world. A pity actually, as they have wonderful timepieces in their collection that can easily compete with some Swiss and German counterparts. Although I am not particularly a fan of quartz watches, with a few exceptions, I was offered to have a go with this Grand Seiko SBGV009 that has a quartz (caliber 9F82) movement.

I asked Seiko how come they had a couple of these Grand Seiko quartz models in stock for our market and they told us it is because they had quite a bit of demand for them. Now I understand that my opinion does not reflect everyone’s opinion and that there might be a gap between what you and I think are the most interesting watches and what is actually being sold in boutiques. However, spending a few thousand on a quartz watch is something that does require a bit field-work for me to understand why someone would buy it. So I had a look and let me share my observations with you in this Grand Seiko SBGV009 review. 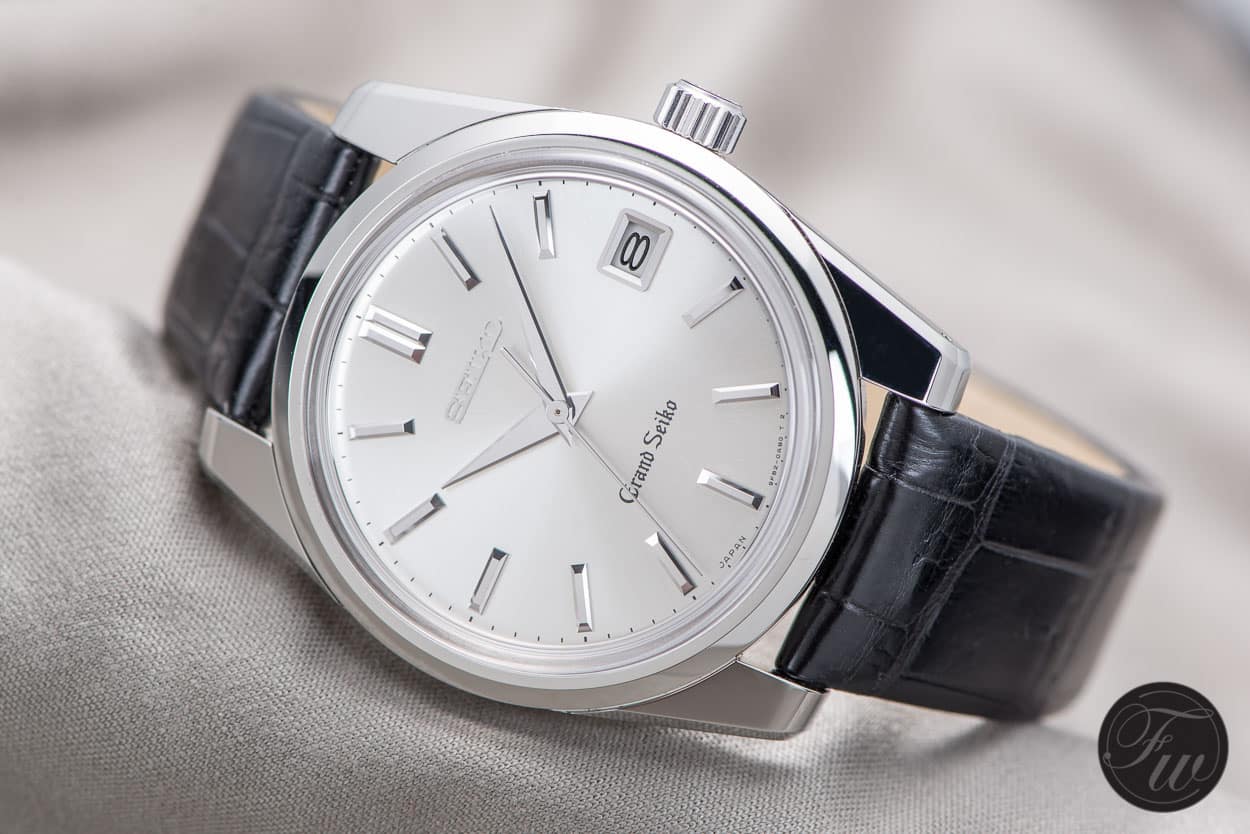 The Grand Seiko reference SBGV009 is actually a 50th anniversary limited edition of 1200 pieces to commemorate the very first Grand Seiko with a date, the 1964 ‘Self-Dater’. It was actually only 4 years after Seiko introduced the first Grand Seiko on the market, produced in Suwa Seikosha, in Nagano. The original 1964 model had the same case design, but had a mechanical chronometer movement. The first quartz movement in a Grand Seiko wasn’t actually done before 1988.

The stainless steel case could have been taken out of an old stock from the 1960s, the shape of this 37.2mm case has beautiful wide straight lugs and bevelled edges. It has a high polished finish that has been done with the utmost precision. Every angle shines like a mirror. The small bezel leaves a lot of room for the dial, so the watch actually shows a bit bigger than 37.2mm. The case of this Grand Seiko measures 10.2mm, mainly due to the curved high sapphire crystal. 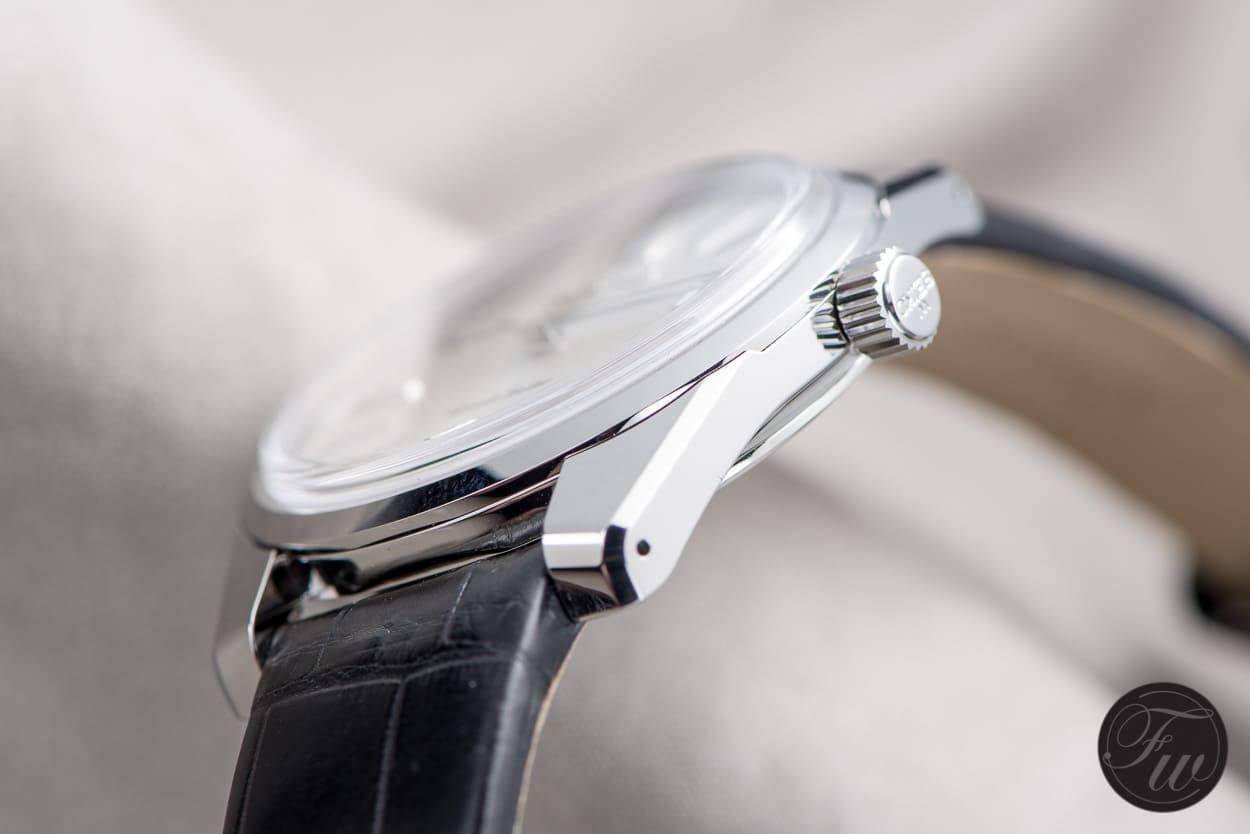 This re-edition of the 1964 Self-Dater comes in two versions actually, the silver dial version we have in this Grand Seiko SBGV009 review and then there is the black dial version with reference SBGV011 (limited to 900 pieces).

On our SBGV009, the silver dial is simply stunning. It would – almost – make me forget it is a quartz timepiece and thus make me want it badly. More on the movement later though, as I don’t want to jump to conclusions too soon. The silver dial has an applied Seiko logo at 12 o’clock and ‘Grand Seiko’ in writing at 6 o’clock. Of course there is a date aperture on this tribute to the ‘Self-Dater’, with a very nice high polished frame around it.

The applied hour markers are polished as well and have very nice angles. Seiko left a good deal of space between the applied hour markers and the printed minute track which results in a very clean and readable dial. The polished hands are actually the same as I’ve seen them on other Grand Seiko watches, including those in the mechanical caliber 9S series as well as in the Spring Drive caliber 9R series. I have no idea whether these hands were used all the time for the Grand Seiko watches, including in the past, but at least it makes it a recognizable watch by constantly using them. 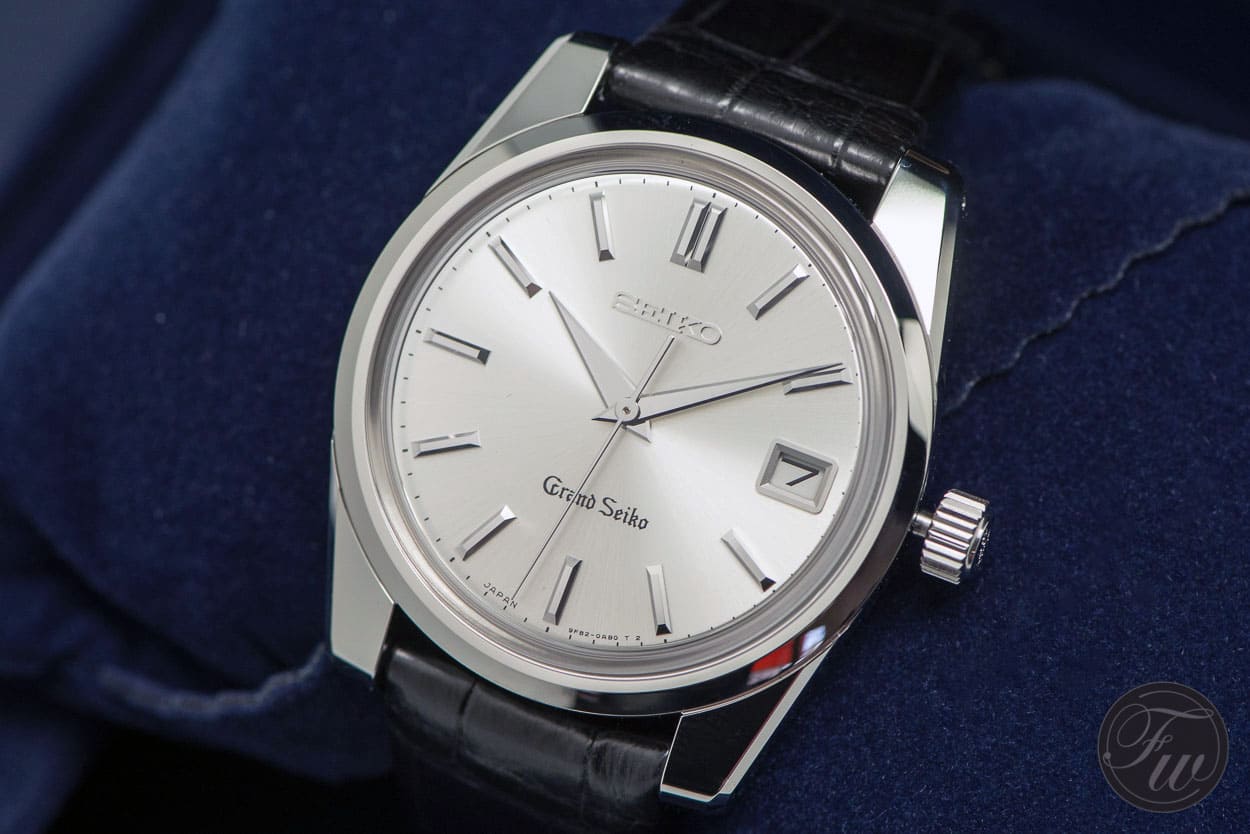 On the back of this Grand Seiko SBGV009, you will see the Seiko emblem in the middle as well as some engraved information around the center. Here you also will find the number of this limited edition (out of 1200) and the serial number of the watch. Of course, it also proudly states that this Grand Seiko has been made in Japan. The back of the watch also has the nice polished finish. 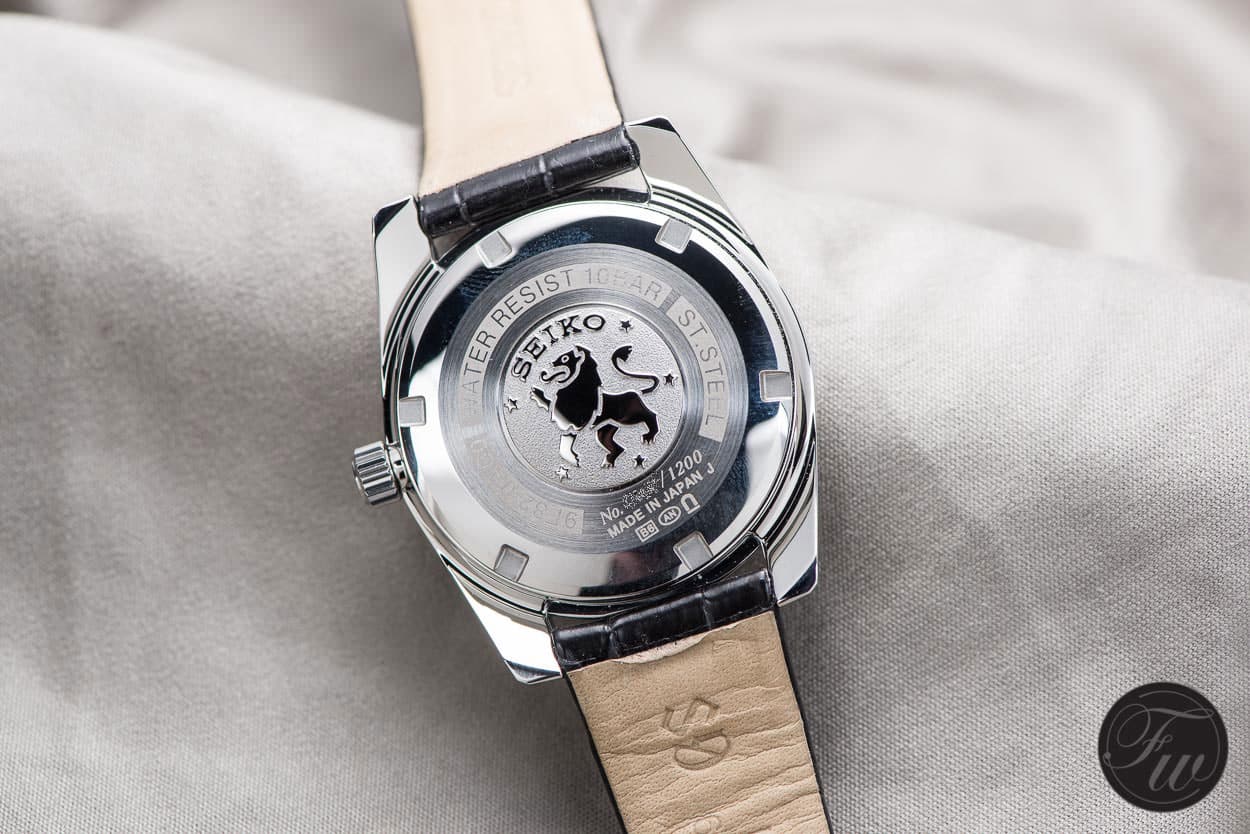 A small blue box is what Seiko uses to present their Grand Seiko watches. A no-nonsense good quality box that keeps the watch safe from dust. This watch also came with the stainless steel bracelet but I actually didn’t even touch it. I love this 1960s look on a leather strap. 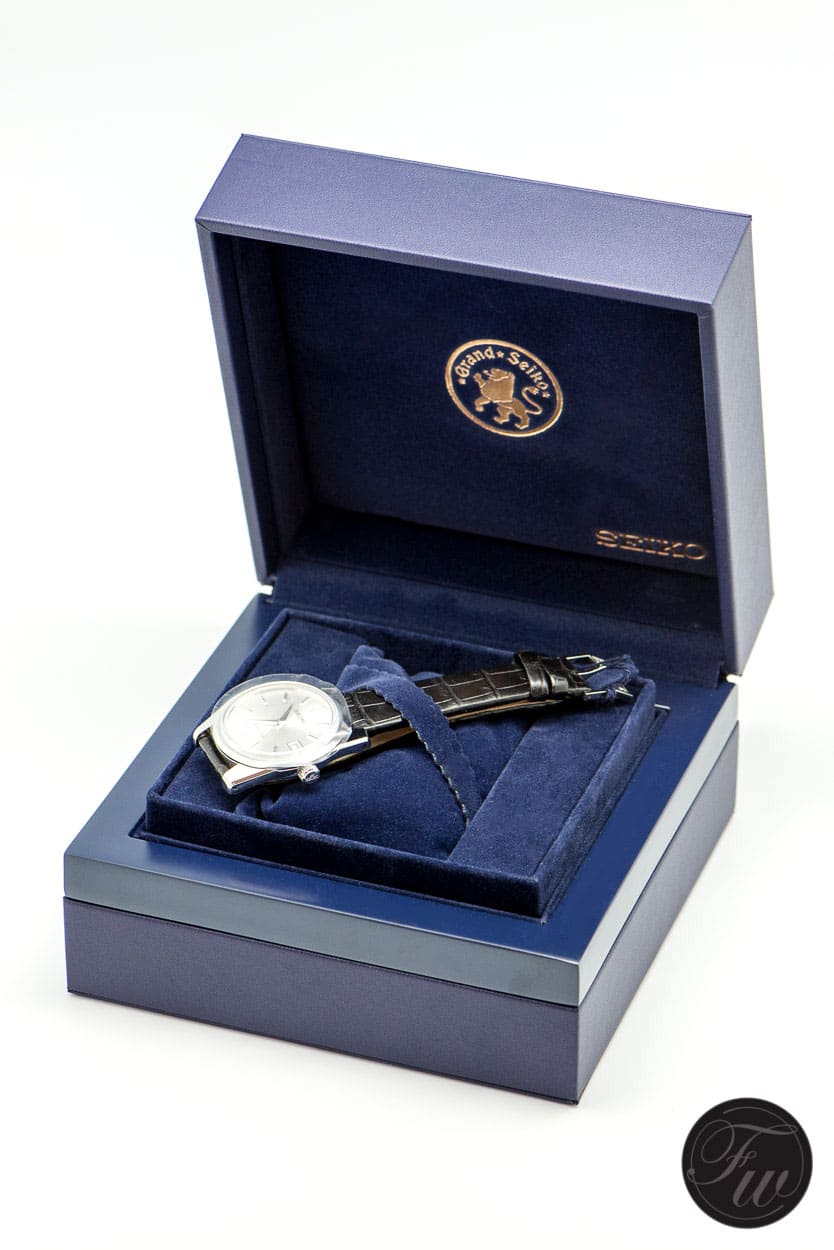 For some perhaps the grande finale of this Grand Seiko SBGV009 review, the in-house caliber 9F82 quartz movement. I must admit that I was a bit hesitant at first when I picked-up this Grand Seiko with quartz movement. A €4100,- Euro (~ $5000.- USD) watch without a mechanical movements needs some explanation, like our recent review of this quartz digital piece from Omega.

As you can see below, the 9F quartz movement has a beautiful finish. Actually, I think it looks even nicer than some mechanical movements out there when it comes to finish. Seiko claims that this 9F caliber might just be the best quartz movement ever built. Pictured below is the 9F62A, which is – aside from the difference in size – equal to the 9F82 in the Grand Seiko SBGV009. 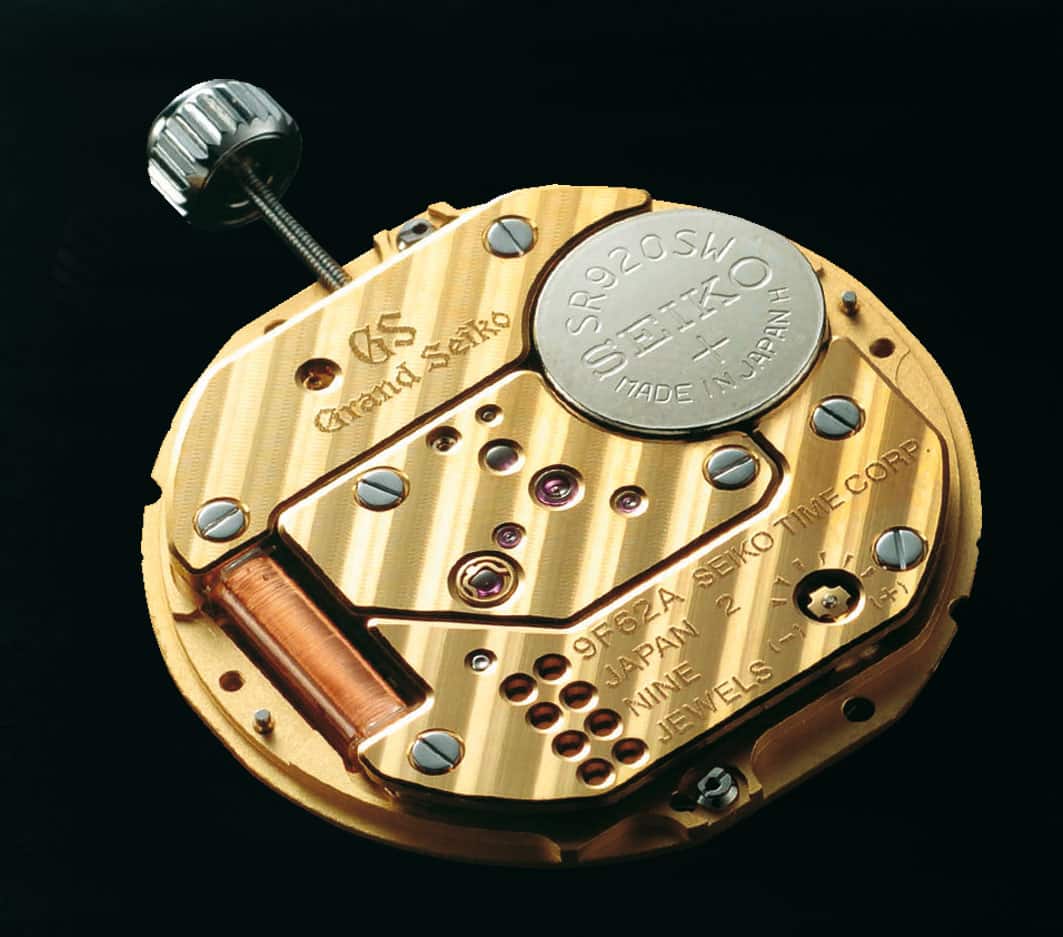 Because of the high torque in this movement, watches – like the Grand Seiko with quartz movements – can use longer hands. The hands can go all the way to the end of the dial with this high torque movement. The movement is powered by a twin pulse motor that delivers more power.

A nice feature of the Grand Seiko SBGV009 is that the second hand pauses exactly on the markers on the dial. The caliber 9F uses a regulatory wheel that adjusts the blacklash between gears to prevent vibration of the hand. That ‘mechanical’ part is being used in this quartz movement to make sure the precise motion of the second hand.

Seiko’s 9F quartz movement is also a temperature sensitive movement. It will detect variation in temperatures up to 540 times a day and automatically compensates for this change to maintain its high accuracy.

As you can see on the picture above, there is a small switch that shows (-) and (+) and a few markers in between. You might have guessed it already, it is there for adjusting the pace of the movement. Like mechanical movements and their regulation, this quartz movement also has a switch for fine regulation. The movement is said to have an accuracy of +/- 10 seconds a year.

Battery life of the Grand Seiko SBGV009 is 3 years, even with the twin pulse control motor inside. Seiko also claims to have a service life time span of 50(!) years for this watch, except the periodical battery changes.

Although I have fairly large wrists, the 37.2mm wears and looks fine as it is a dress watch and probably to be used with a long sleeve shirt anyway. The croc strap is soft and thus very comfortable. The crown is easy to use, but only needed to correct the time twice a year (DST) and the date. Although the Grand Seiko SBGV009 has a silver dial, silver polished hands and hour markers, the watch is very readable. A perfect watch for formal occasions or when you are just more into dress watches.

The Grand Seiko SBGV009 comes with a pin buckle, which I actually prefer over a folding clasp. Especially when it concerns a relatively small dress watch.

The big question is, is this Grand Seiko with quartz caliber 9F worth buying? Given the fact that a movement doesn’t have the biggest influence on the price tag on a watch, the total picture of this Grand Seiko SBGV009 makes it a watch that is high value for money. Even if you do include the fact that this watch has a quartz movement, it is one of the most impressive – perhaps the most impressive – quartz movements I’ve ever seen.

Personally I am into mechanical watches as I like the fact a watch has something mechanical to compensative for the digital behaviour I am showing all day long with my iPhone, Macbook, iPad and all the applications I need to use and manage all day. However, to the people who do buy this watch I would like to say ‘Good job!’ as it is a perfect time keeper with an impressive movement (and not only optically) and a wonderful design and finish. This is a timepiece of such great and high quality that I’ve only come across in the higher end of the Swiss (and German) watch market.

Hot Topics
Introducing: The New Seamaster Professional 300M 60 Years Of Bond — With A Special Animated Case Back
105 comments
Are You Still After An Omega × Swatch MoonSwatch?
102 comments
Introducing: The Oris Divers Sixty-Five Fratello Limited Edition
93 comments
It’s Time To Invest In A Dress Watch — Our Picks From Breguet, Omega, Grand Seiko, And More
74 comments
The Rolex Waitlist Conundrum — How Much Will The Price Of Your Watch Increase While You Wait?
50 comments
Popular
An Overview Of All Omega Speedmaster Apollo XI Models
Robert-Jan Broer
17
Omega Speedmaster Hodinkee 10th Anniversary Limited Edition
Robert-Jan Broer
7
You Asked Us: Rolex Submariner vs Omega Seamaster
Robert-Jan Broer
24