It must not go unnoticed, this change at the Seiko Watch Corporation. Grand Seiko is is now a separate entity and will no longer feature ‘Seiko’ on the dial of their watches. The Grand Seiko logo will proudly show at 12 o’clock on all their watches from now on.

A wise move I think, as there was a bit too much confusion at times with three different ‘Seikos’ on the dial. First there was the brandname ‘Seiko’ at 12 o’clock, below the center pinion you’d find the ‘GS’ logo and ‘Grand Seiko’ written under that. From today on, it is just the ‘GS’ logo at 12 o’clock and ‘Grand Seiko’ written under it. But not only that, Grand Seiko will be treated as a separate company. Like what Lexus is to Toyota. 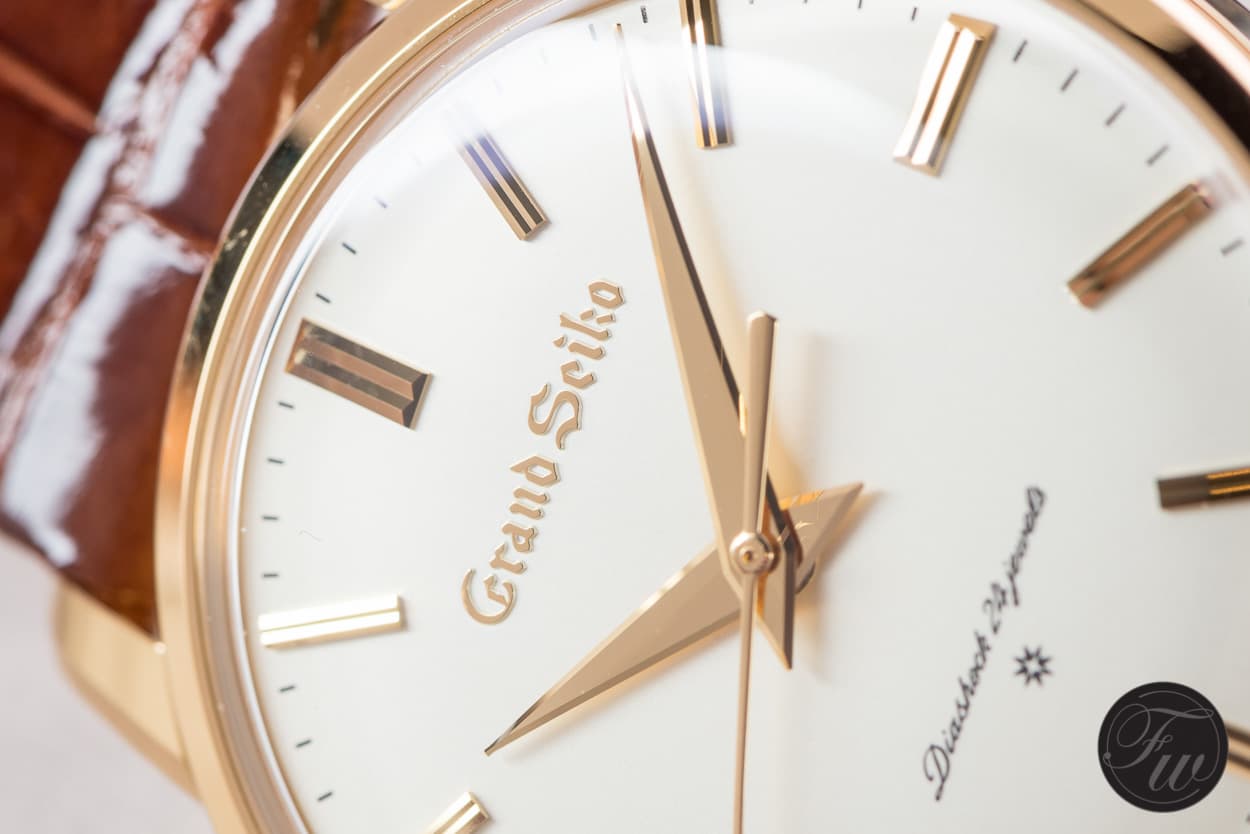 Grand Seiko introduced a couple of new models in BaselWorld, that all comply to these new ‘rules’. One of them is their recreation of that very first Grand Seiko of 1960 (produced till 1964, using their caliber 3180 chronometer graded movement). Available in stainless steel, 18 carat gold and platinum, but only as limited editions.

We were able to take a look at their Grand Seiko SBGW252, the 18 carat gold version of their recreation of the 1960 Grand Seiko. A couple of things changed of course, such as the modern movement, the size (38mm) and that it has a solid case (instead of 80 micron gf). Only 353 pieces are available for the gold model, 136 in Pt950 and 1960 pieces in stainless steel. The 353 stands for the day of 1960 that it was introduced, 136 stands for the age of Seiko and 1960 for the year of the first Grand Seiko.

As always, the first thing to notice (I also admit that I am very focused on these things) are the sharpness of the hour marker and hands. The level of finish on those are just incredibly high. The 38mm case is just a great size. A modest gold watch that is not so small to be that typical ‘grandfather’s watch’ but also not too big so that it becomes a bit over-the-top or ‘cheap-ish’. Grand Seiko chose wisely for this diameter. 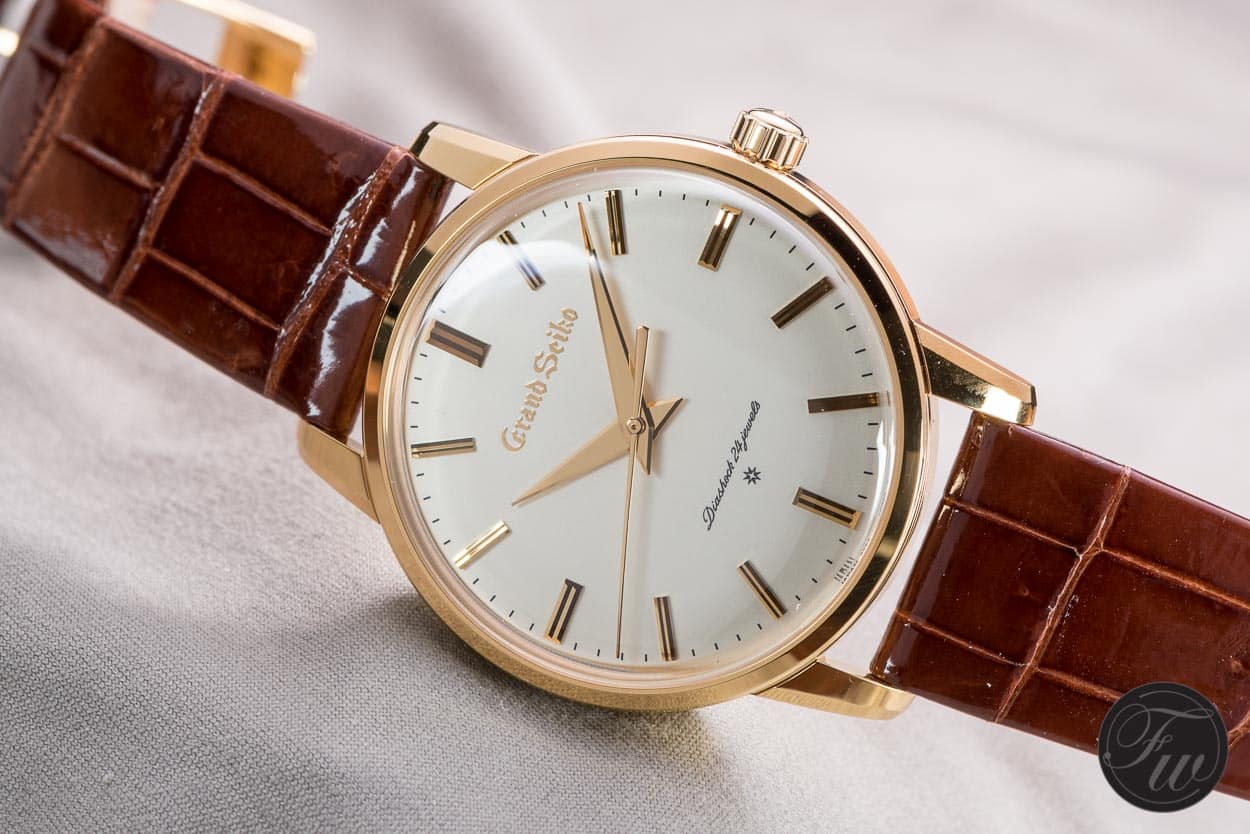 Inside is the Grand Seiko caliber 9S64. This is a hand-wound caliber, like its predecessor from 1960. Grand Seiko only started to use self-winding movements from 1966 and onwards in their reference 62GS. Interesting to note is, that Grand Seiko decided to use two variations of this movement. The Grand Seiko SBGW252 we have here, and the stainless steel version (SBGW253) use a variant of the caliber 9S64 that is accurate within -3 and +5 seconds a day. For the platinum version (reference SBGW251), they regulated it between -1 and +5 seconds a day. It really makes me wonder why they would do this only for the platinum version. Both are well within the COSC standards (note that this watch is not chronometer rated), but it just struck me as strange that they make the reference SBGW251 not only more exclusive than the others by the use of platinum, but also to have it better regulated than the steel and gold reference. If you are able to regulate a watch between -1 and +5 seconds a day, why not do it for all 9S64 movements or at least for these three 1960 recreation models of the Grand Seiko? Anyway, they seem to think a bit different about that topic at Grand Seiko.

Let’s get back to the watch. The Grand Seiko 9S64 movement has a power reserve of 72 hours and has 24 jewels. Interesting is that the original caliber 3180 movement had 25 jewels, which was something common to have printed on the dial in those days. On the new Grand Seiko SBGW252 (and the other two references) they printed ’24 jewels’ on the dial at 6 o’clock. The typography is identical to the one used on the original 1960 model, including the little logo below. The original Grand Seiko from 1960 with its caliber 3180 movement was chronometer rated, so there was ‘chronometer’ printed on the dial as well. Today’s caliber 9S64 is not chronometer rated, so Grand Seiko did not put that ‘chronometre’ writing on the recreation versions. You can’t put it on the dial anyway, when it is not chronometer certified. But this is the only difference you’ll see at first glance when looking at the Grand Seiko SBGW252. 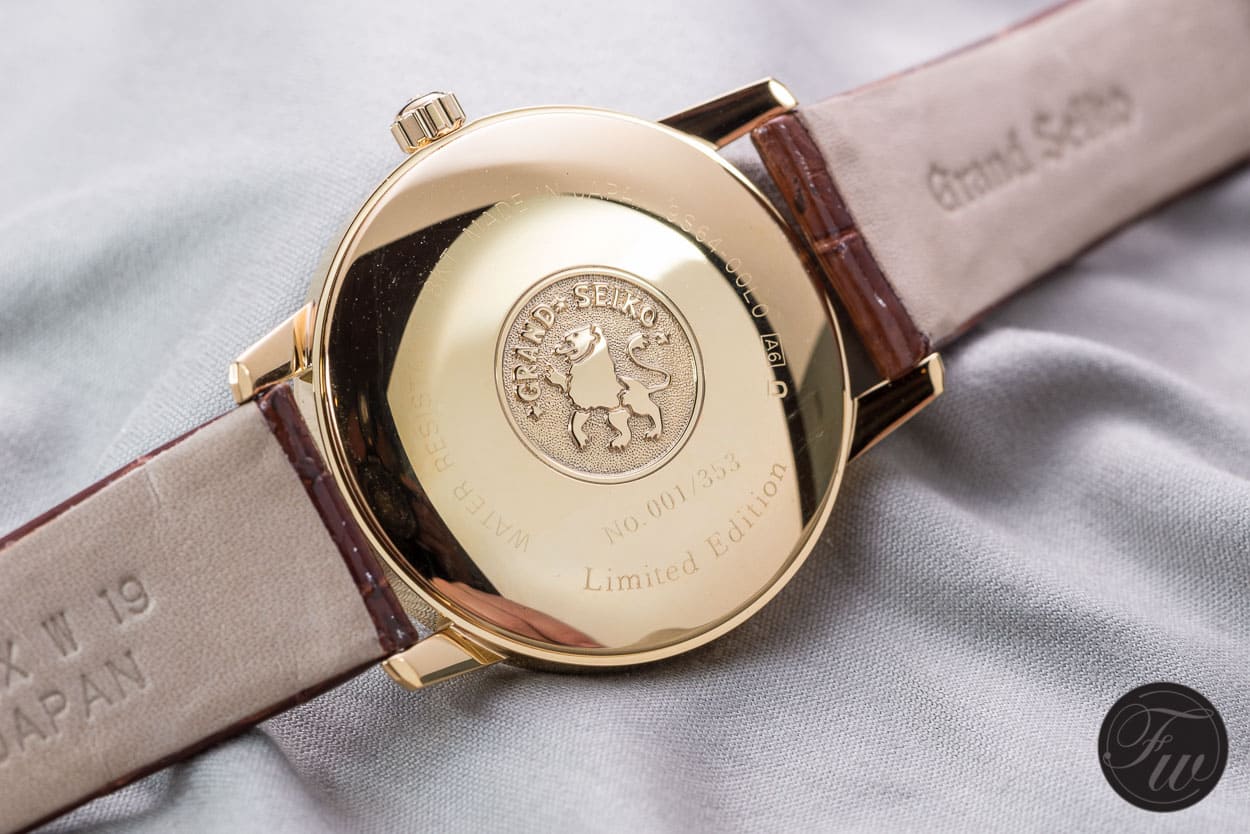 The caseback of the Grand Seiko SBGW252 is solid gold (no view on the movement), and features the embossed medallion of a lion. The original Grand Seiko of 1960 also had the lion on the caseback. Besides some specific model information on the caseback and the medallion in the center, you will find the unique number of the limited edition engraved in there. The Grand Seiko SBGW252 is quite thin (10.7mm) as you can see and makes it a comfortable watch on the wrist. Note that the crown is signed with an ‘S’. This might have something to do with the fact that it was also signed with an ‘S’ in 1960, later models (and today’s modern Grand Seiko watches) are signed with ‘GS’. 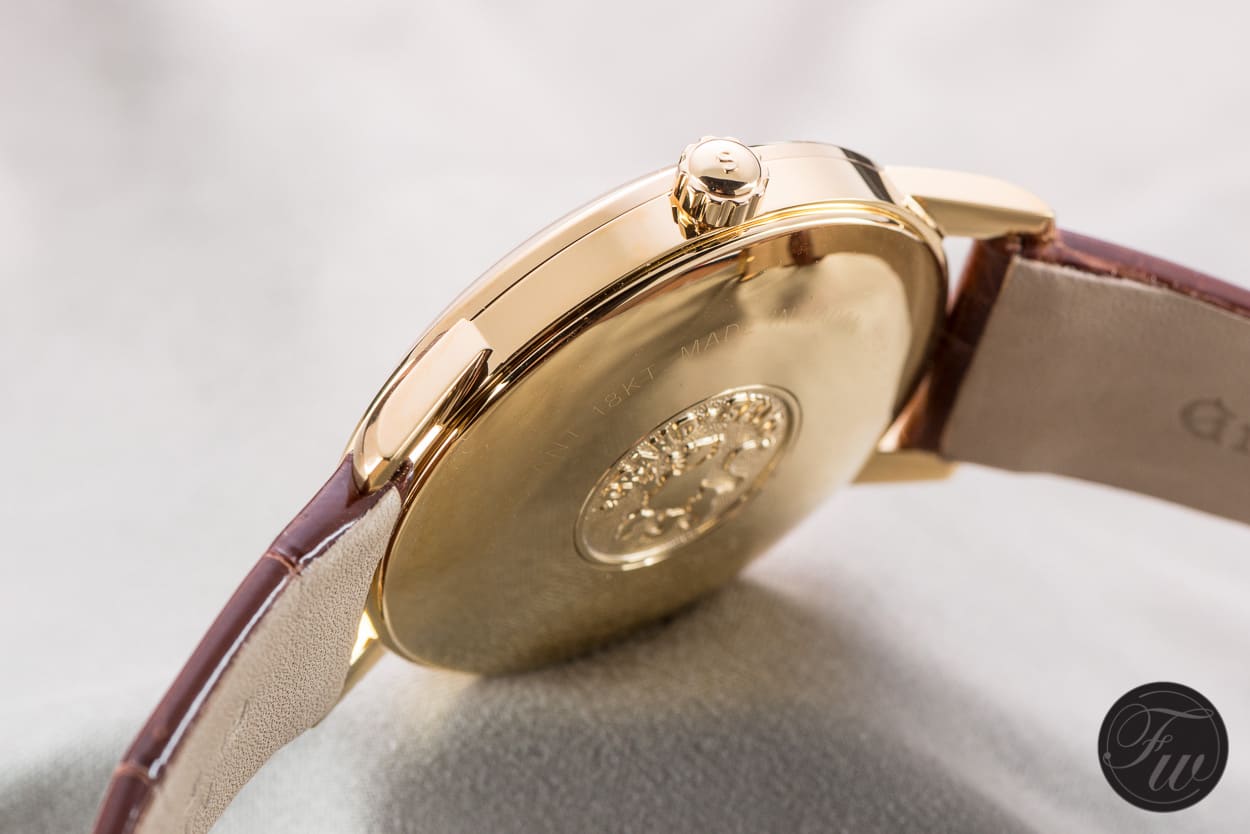 The Grand Seiko SBGW252 is simply a beautiful dress watch that really does justice to the original 1960 model. It is a statement watch from Grand Seiko to show what they can do and how much they value their history. Grand Seiko can be proud of that rich history, as they did some marvelous things. Then, and now. The design of the Grand Seiko SBGW252 is stunning and I simply love those relatively beefy long lugs. The dark honey colored alligator strap suits the gold of the case (and hour markers and hands etc) and comes with this gold buckle signed ‘Seiko’ (most probably like the original version). 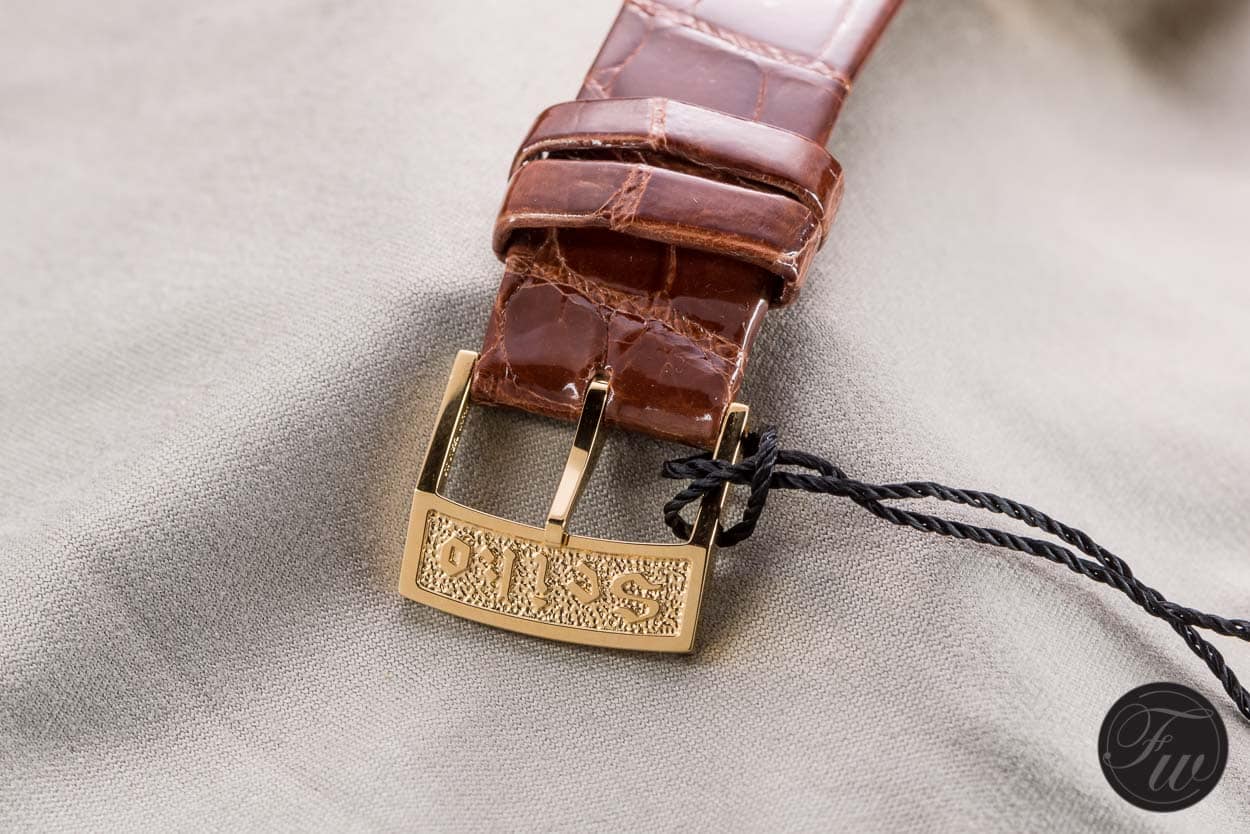 The Grand Seiko SBGW252 doesn’t come cheap with a retail price of 21.700 Euro. The platinum version retails for 38.500 Euro and the stainless steel Grand Seiko SBGW253 for 7.200 Euro. I love the 18 carat gold version best to be honest, as I believe this watch should be in a precious metal. Now, platinum is also a precious metal and those first 1960 models were also available in platinum, but I like the color of yellow gold on this type of dress watch.