Western culture likes to take things easy. Take the seasons, for example. We have four of them. But Japan has 24 “sekki” that mark nature’s ever-changing seasons. And that’s a good thing because the nuances of these 24 periods are way more subtle than the ones we know. For example, in Japan, they have a name for the time when autumn turns to winter. They call that “sōkō”, the time of the year when the first frost blankets color the landscape. The Grand Seiko Sōkō Frost SBGH295 and SBGA471 are frosty beauties with a warm afterglow that capture the natural phenomenon. The two watches are U.S.-exclusive special editions (NOT limited editions, “just” special ones) that are part of the Grand Seiko Heritage Collection.

Japanese culture has a lot of color options. From my perspective, the seasons have only four colors — white, green, yellow, and blue. But with the twenty-four sekki that Japan has, the color options multiply drastically. And that results in diverse and subtle collections of Grand Seiko watches with delicate color nuances. The pink-dialed Grand Seiko SBGA413, inspired by the pink cherry blossoms that fall on the water and become hanaikada, or “flower rafts”, is an absolute stunner of a watch in the most sophisticated way. And now it’s time for two, icy cold Sōkō Frost models. The first is the SBGA471 with an iconic 44GS-style case design. And the second is the SBGH295 with a reimagined 62GS case design. Both are in stainless steel. 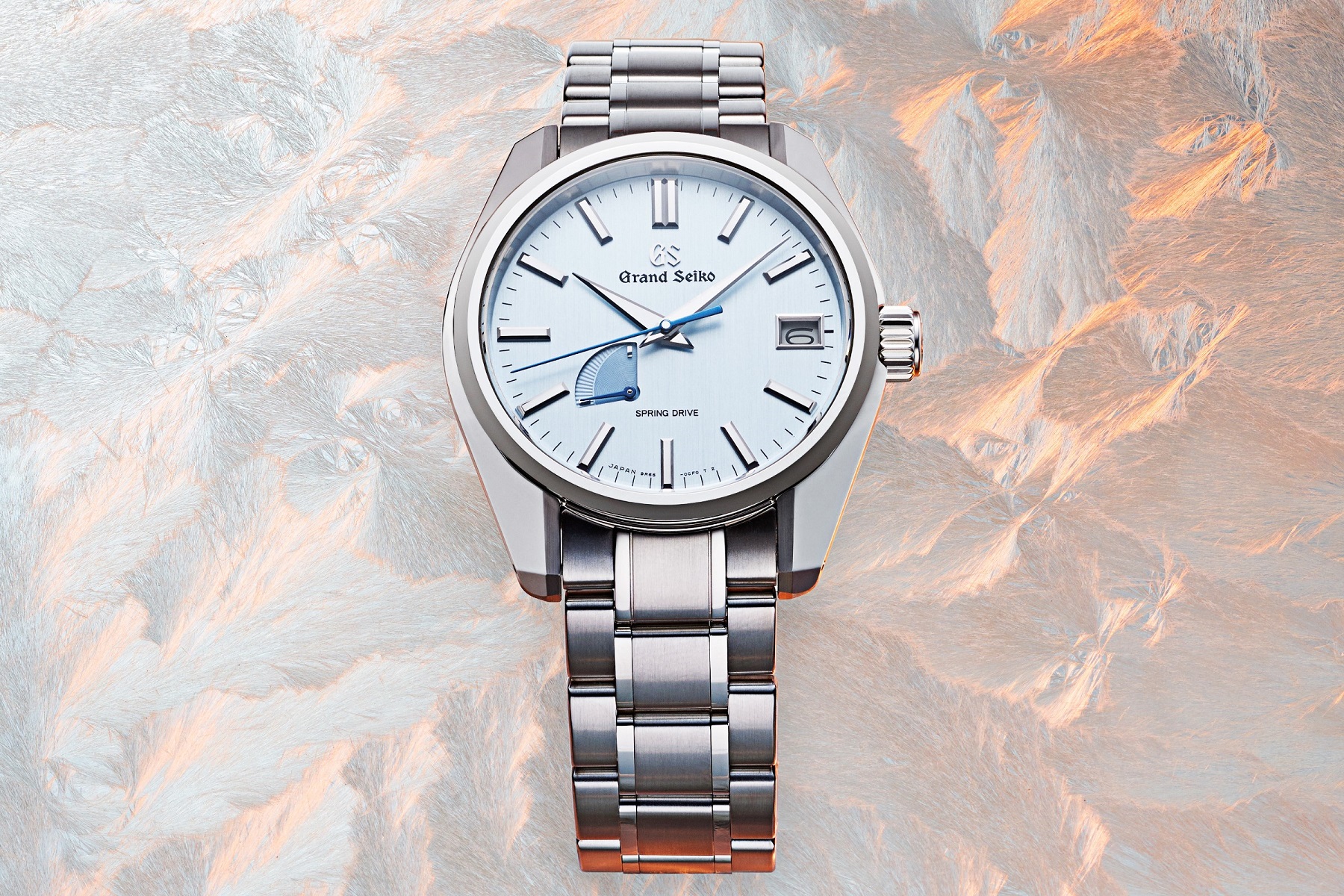 Let’s start with the Grand Seiko Sōkō Frost SBGA471 with its box-shaped sapphire crystal with anti-reflective coating. This 10-bar water-resistant watch comes from the Shizukuishi Watch Studio and shows an icy blue vertically textured dial. The design mimics the frozen trunks of the bamboo trees in the Arashiyama bamboo forest. Its stunning dial is enclosed in a 40mm 44GS-style case executed in titanium. The original 44GS case design established the Grand Seiko Style 55 years ago, as RJ explained in a recent article. The case’s perfectly flat and mirror-polished Zaratsu finishing brings out the crisp lines in such a way that is quite hard to beat. It looks incomparably tight and straight. The play of light and shadows adds life and strength to the already charismatic design of the case. It is a timeless case design that still looks modern 55 years later. 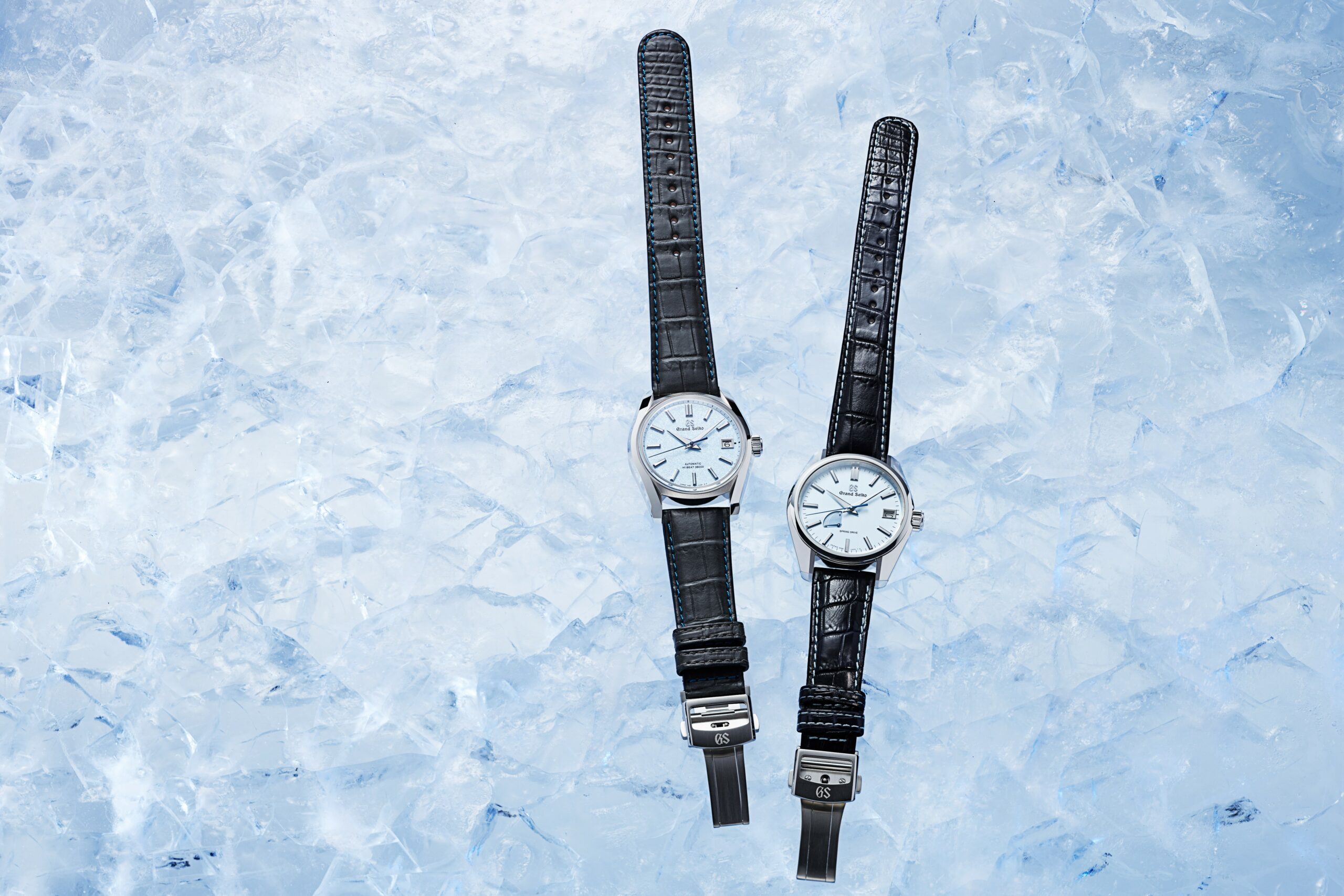 The Grand Seiko Sōkō Frost SBGA471 is powered by the Spring Drive caliber 9R65, visible through the case back. The movement is hand-assembled in Grand Seiko’s Shinshu Watch Studio. Spring Drive movements represent the best of two worlds. They combine the high torque of a mechanical movement with the high-precision integrated circuit control system of an electronic power source. A claimed accuracy of ±15 seconds per month and a power reserve of 72 hours are numbers to show off. What’s good to know is that the SBGA471 features a titanium bracelet outfitted with a deployant clasp with a push-button release. It also comes with an extra crocodile leather strap with a classy single-deployant buckle. The recommended retail price is $6,000 USD. 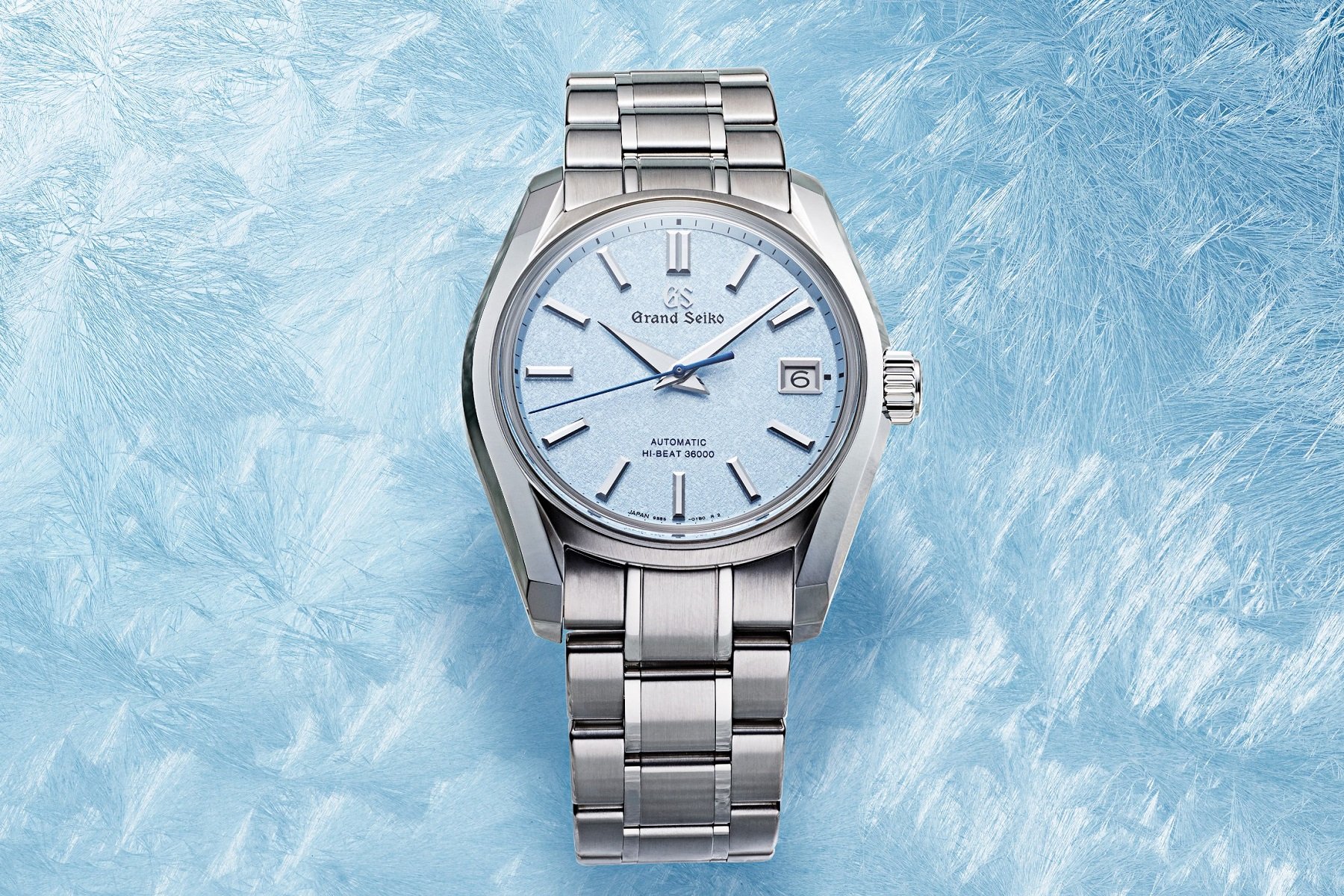 The second watch in this series is the Grand Seiko Sōkō Frost SBGH295, which features a reimagined 62GS case design. The stunning 1967 case design is basically free of a bezel, leaving room to maximize the impact of the dial. And since the 62GS was Grand Seiko’s first automatic timepiece, the new SBGH295 is outfitted with just such a movement. But first let’s have a look at the 40mm bezel-free, Zaratsu-polished stainless steel case. As I mentioned, its design allows the dial to shine because of its restrained looks and its wide dial opening. It works very well for the SBGH295 since the clear blue skies over the Sea of Japan during the early winter months that served as inspiration look almost endless. There’s not a cloud in sight underneath the box-shaped sapphire crystal with an anti-reflective coating. In case you’re wondering, yes, that’s the kirazuri ice-blue dial that appeared back in 2018 in another U.S. exclusive. 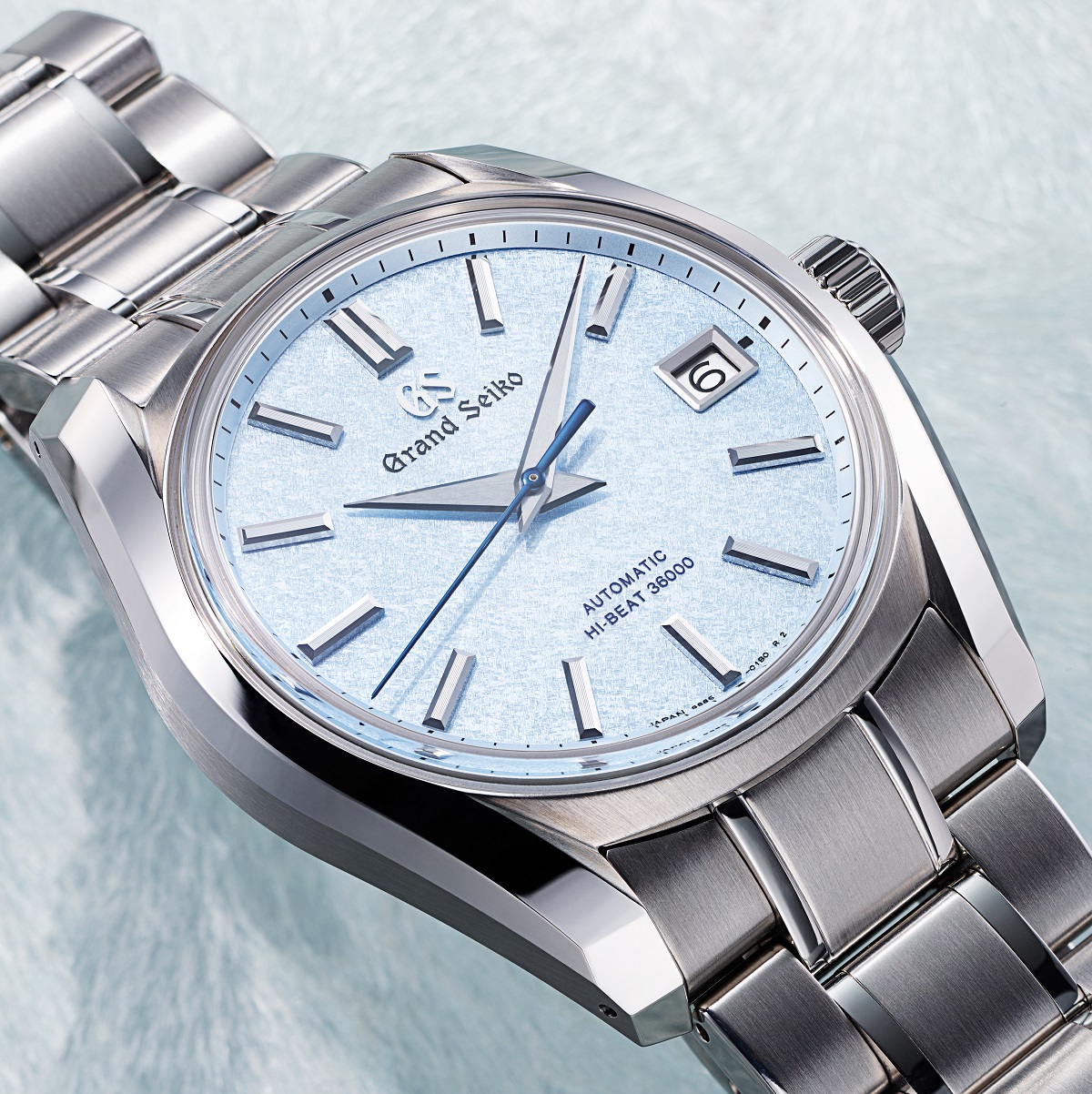 Inside the 10-bar water-resistant 62GS-style case beats the in-house Grand Seiko 9S85 caliber. This automatic Hi-Beat 36,000 movement has a claimed accuracy of -3 to +5 seconds per day and a not-too-shabby power reserve of 55 hours. Same as with the Grand Seiko Sōkō Frost SBGA471, the SBGH295 comes on a bracelet (steel in this case, of course) and with an extra crocodile leather strap in the box. The recommended retail price of the Grand Seiko Sōkō Frost SBGH295 is $6,900 US. 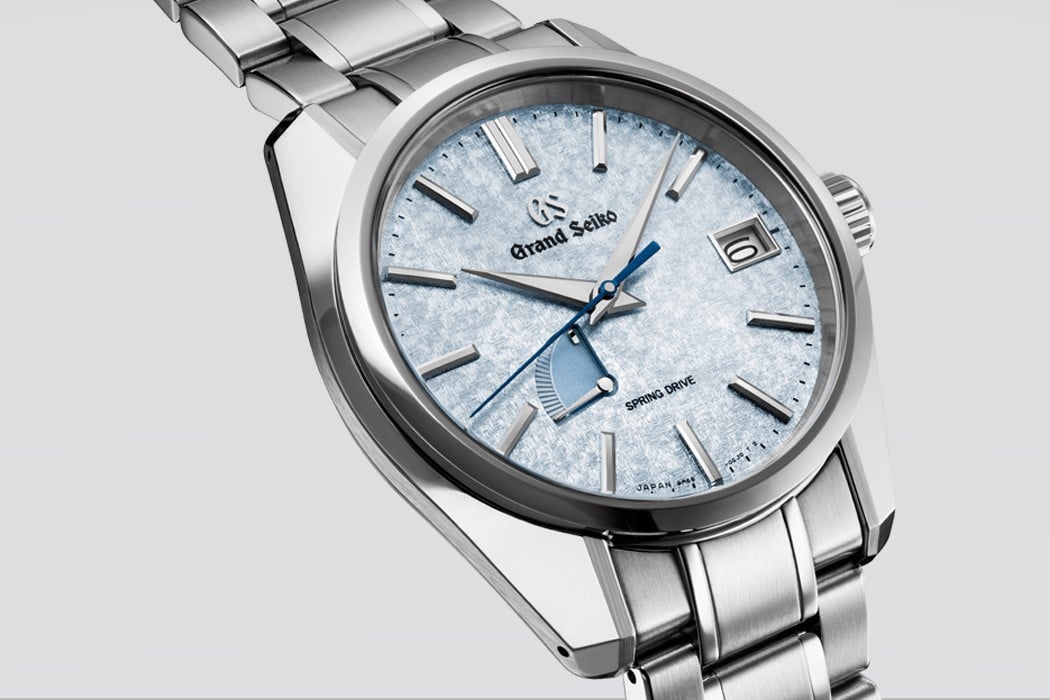 A cold reminder and frost foresight

Both the Grand Seiko Sōkō Frost SBGA471 and SBGH295 special edition watches might look familiar. That’s because of the 2018 SBGA387, a Spring Drive U.S. Limited Edition of 558 pieces in stainless steel with a kirazuri ice-blue dial. The color now makes a comeback in the SBGH295. With the appearance of the new Grand Seiko Sōkō Frost SBGA471 and SBGH295, the ice-cold trilogy is complete. These watches are an icy reminder of just how good a dial-maker Grand Seiko is; these dials send shivers down your spine, don’t they? And with no less than 24 “sub-seasons” to draw inspiration from, the brand will no doubt keep stimulating our senses for many seasons to come.