In true Dutch tradition, the Horological Brothers Bart and Tim are keeping the water out
Lex Stolk
comments 9
Share

The motto of the Dutch province of Zeeland is “Luctor et Emergo”. That translates to “I struggle and overcome”. Many people in the Netherlands believe that the saying, which has been inextricably linked to the coat of arms of Zeeland since 1586, refers to the struggle with water. That’s not the case. “Luctor et Emergo” refers to the uprising against Spanish domination. But does the saying have anything to do with the Grönefeld 1969 DeltaWorks, the Dutch brand’s first sports watch? Yes and no. The watch is named after the Delta Works, a huge project that was built to keep the water out of the lowlands. The name also refers to the water-resistant and sturdy qualities of the watch and, perhaps, the struggle to develop it as well.

In February of 1953, the Dutch provinces of Zeeland and Zuid-Holland suffered a catastrophic flood. It became clear that the lowlands were ill-equipped to keep the water out. Therefore, the Delta Committee was established to come up with a plan to do just that. The plan got the name Delta Works, and the Dutch soon started to dam all estuaries — Western Scheldt, Oosterschelde, Haringvliet, and Brouwershavens Gat. In 1969, the last one was dammed, which marked the completion of the Delta Works project. It was also the birth year of Bart Grönefeld. There’s a lot of meaning in the Grönefeld 1969 DeltaWorks, and we haven’t even talked about the watch itself yet. 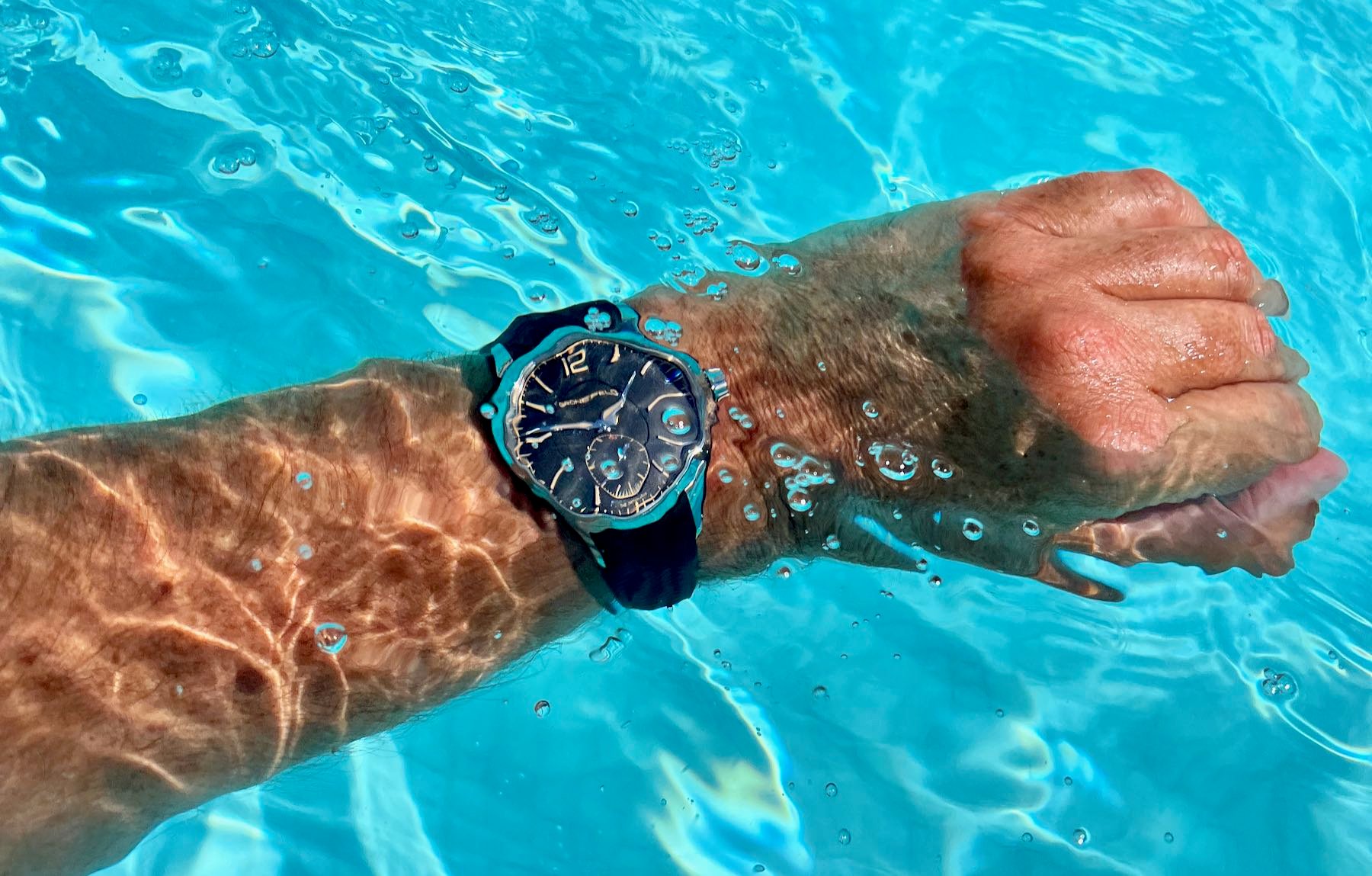 The Grönefeld 1969 DeltaWorks keeps the water out

Bart and Tim Grönefeld, the Horological Brothers, created the 1969 DeltaWorks to cope with water and shocks like a rugged multipurpose sports watch. As I wrote earlier, it’s the first watch of its kind in the history of the Oldenzaal-based brand. In developing it, however, the two watchmakers also made sure to honor the standards of horology and traditional craftsmanship that are synonymous with the Grönefeld name. The 1969 DeltaWorks is a timepiece aimed at purists — people familiar with the brand and Nouvelle Horlogerie in general. Still, the watch ticks all the boxes of a proper high-end sports watch on a visual level. And there are options too. Three different dial designs/colors, to be precise, and five different straps, as well as a choice of steel or color-coordinated FKM rubber-clad inserts for the case. 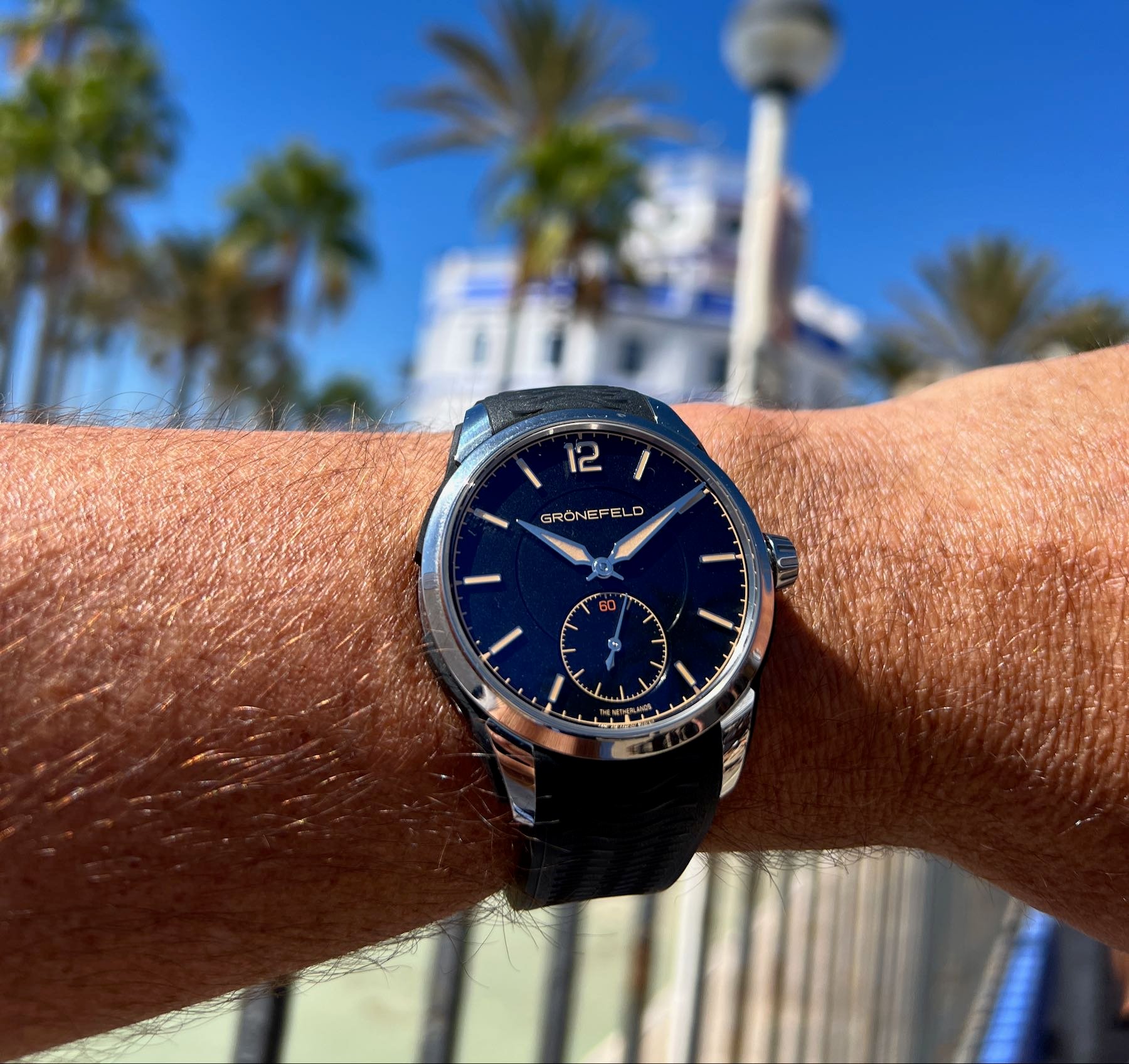 The struggle that is watchmaking

We caught a glimpse of the Grönefeld 1969 DeltaWorks during this week’s Geneva Watch Days. While we will need it at Fratello HQ to be able to properly report on the feel and build quality, our first impression was positive. Although, it also had us raise an eyebrow. And that’s because on the Grönefeld website it reads “… we can no longer accept new orders until further notice.” That’s mainly because finding staff who can produce high-end timepieces is no small feat. So before you get overly excited, just realize that this new release also has to overcome that struggle. As such, the Grönefeld brothers informed us up-front that they cannot make more than 20 pieces of the 1969 DeltaWorks per year for the next five years.

A first impression is a tricky thing to have with the 1969 DeltaWorks because there are so many variants possible. But in general, the brother’s first sports watch is very easy on the eye. My favorite is the one with the two-tone dial combined with the olive-green rubber strap. And with the steel case inserts, not the rubber ones. Also, since we’re on the topic of rubber, how will those rubber “bumpers” hold up after years of active wear and tear? A fair question, I think, considering the steel case with the inserts has a 100m water-resistance rating. It also comes in at 44.5mm in diameter, but for good measure, the diameter of the bezel is 43.3mm, and the watch has a fairly moderate height of 12.5mm.

During Geneva Watch Days, I talked a lot about case sizes decreasing. More and more brands are releasing smaller watches, and that goes for both sporty and complicated timepieces. The Grönefeld 1969 DeltaWorks is going against the downsizing trend for sure. 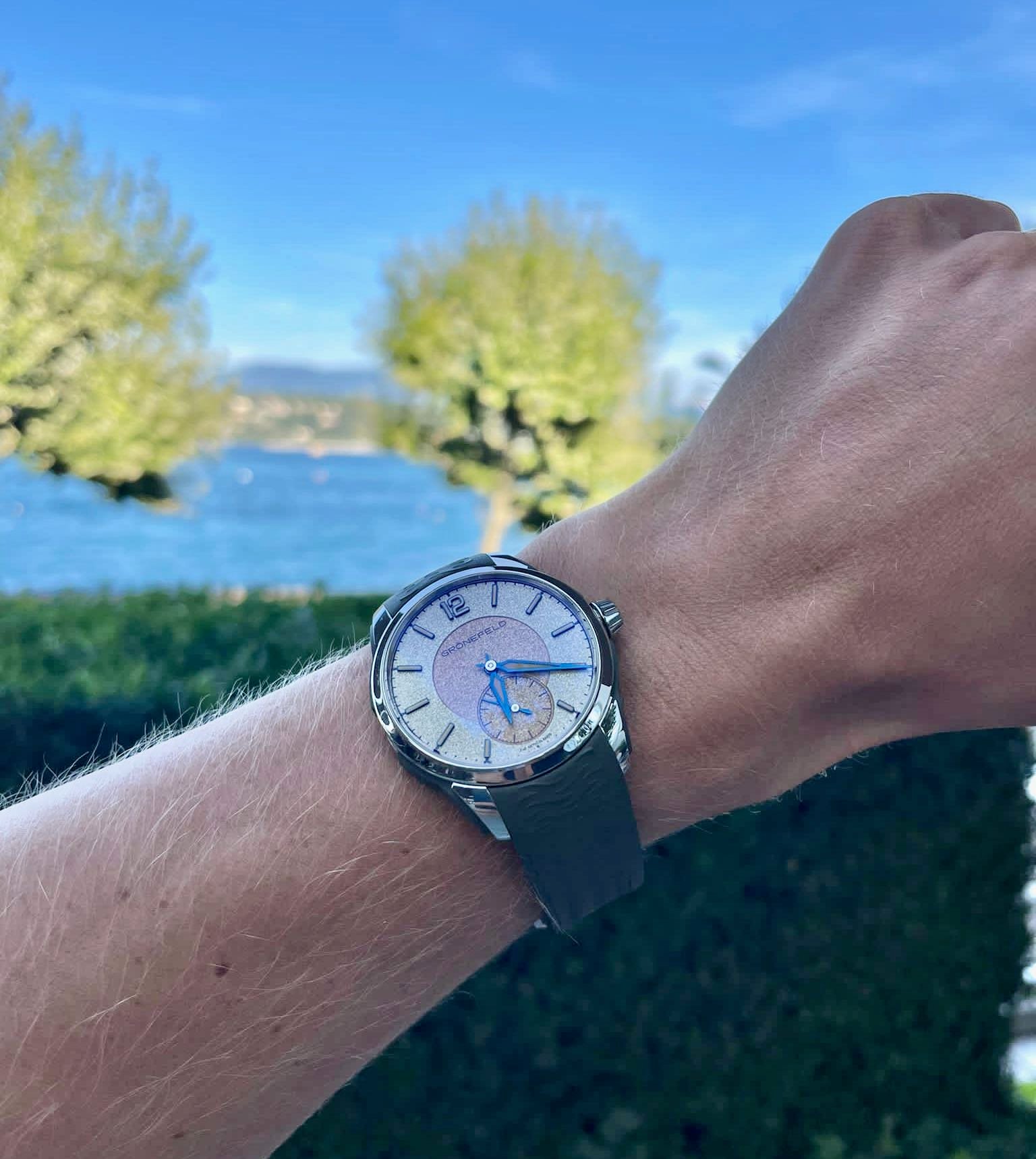 Safe inside the 1969 DeltaWorks

As you would expect, inside the robust steel case beats a great-looking movement. It’s the in-house-developed caliber G-06, an automatic movement that you also find in the 1941 Principia Automatic. The movement, however, got some additional details which enhance robustness. The rotor, for instance, with its open-worked architecture features four steel arms in a double-spoke design. The arms stretch to an 18K gold mass underneath. In case of a shock, the long arms will prevent the oscillating mass from touching the inside of the sapphire crystal or damaging the bridges below. Clever watchmaking stuff!

The 1969 DeltaWorks has a price of €49,800 excluding taxes. Is that a price you struggle with? If it is, the “Luctor et Emergo” motto could provide some inspiration. Hopefully, Grönefeld can spare us a 1969 DeltaWorks soon for a proper hands-on. For more information and to find yourself a spot on the waiting list, please visit the official Grönefeld website.

Hot Topics
Introducing: The Omega Speedmaster Super Racing With Spirate System
149 comments
Design Vs. Specs — Which Is More Important To You When Buying A Watch?
85 comments
The Updated Bracelet For The Omega Speedmaster Professional 3861 — Here Is What’s New!
52 comments
The Time To Buy Is Now: How The Current Economic Climate Influences Watch Buying And How You Should React
49 comments
Introducing: The New Cartier Tank Française
49 comments
Popular
Hands-On With the Seiko Prospex SRPC91K1 – Save The Ocean
Robert-Jan Broer
15
Hands-On Grand Seiko SBGA373G (Spring Drive) Review [VIDEO]
Robert-Jan Broer
14
You Asked Us: Nomos Orion as a dress watch?
Gerard Nijenbrinks
10