Do you remember the famous Patek Philippe ads with the perfectly clean-cut family? These model citizens are far removed from the daily image of watch enthusiasts. Don’t get me wrong, those people are probably out there, but the time that most watch enthusiasts look like that is far behind us. Over time, the world of watches has found an appeal with a far wider audience than the traditional “posh” crowd. Additionally, we have seen watch manufacturers collaborate with brands that are part of street and youth culture. The latest proof comes in the form of the H. Moser & Cie. Streamliner Chronograph UNDEFEATED. It’s the first collaboration Streamliner model, and it is a special one. Let’s find out more!

Before we get into the special version of the Streamliner Chronograph, though, it’s good to take a look at the world of UNDEFEATED. As some of you might know, I used to be into sneakers quite a bit. While many of the pairs I had have gone, I still own a lot of sneakers. Some of the Jordan re-issues from 2010-2012 are still safely tucked away in a closet. I followed the sneaker culture closely from the early 2000s until probably 2015. During that time is also when Los Angeles boutique UNDEFEATED became one of the leading names in the world of sneakers. 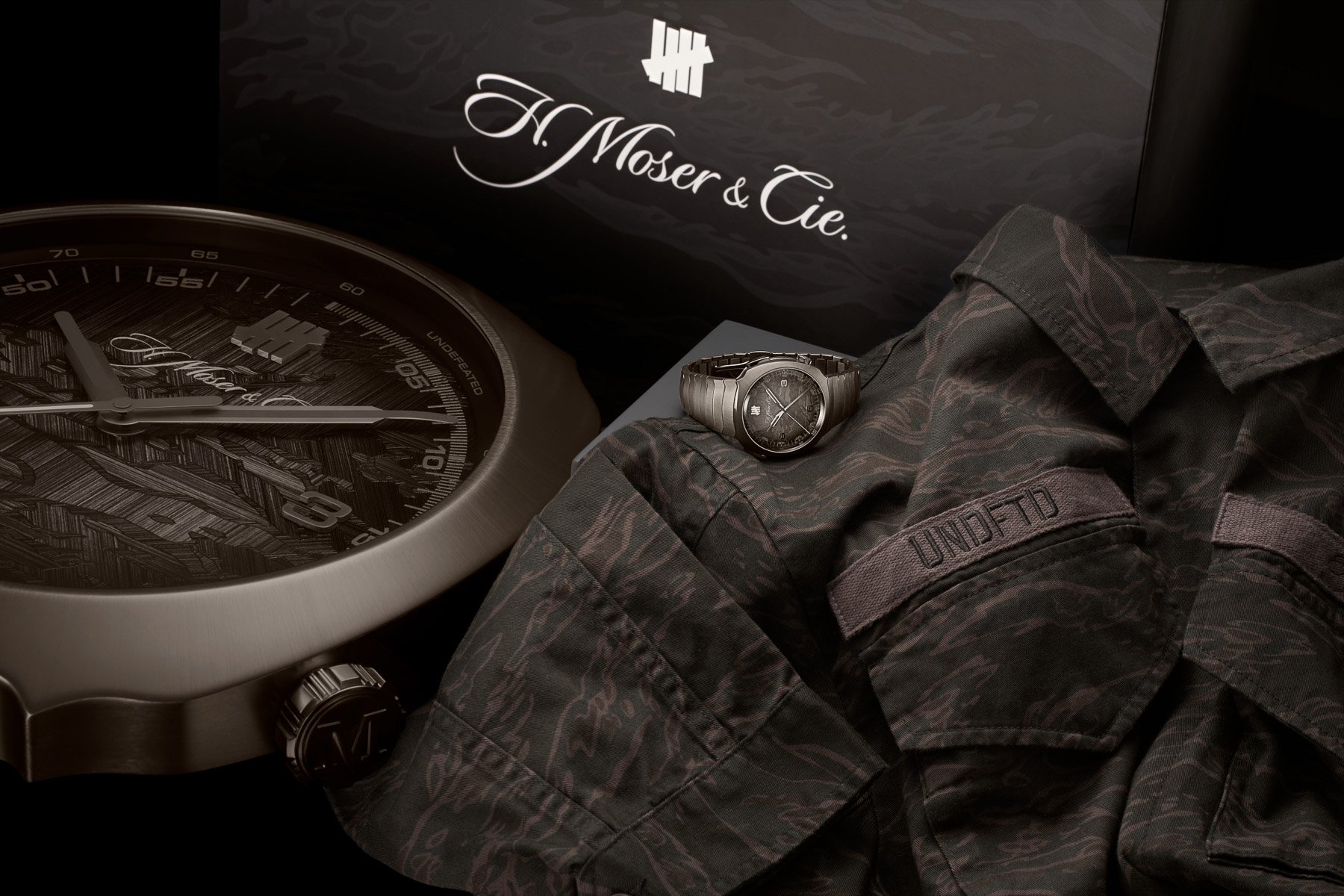 The world of UNDEFEATED

UNDEFEATED was founded in 2002 by James Bond and Eddie Cruz, and its first store was located on La Brea Avenue in Los Angeles. What UNDEFEATED became known for was its curated collection of apparel and sneakers. Today, there are 28 UNDEFEATED stores all over the world. On top of that, the brand became famous for its collaborations with other brands. One of the most famous sneaker releases ever is the Undefeated × Air Jordan IV from 2005. If you want a pair of these army-green and orange Jordans, you’d better expect to pony up €20K. The design was inspired by flight jackets and has become one of the most iconic Jordan sneakers out there. Not only was the release limited to 72 pairs, 50 of which were sold to clients in a raffle, but it was also one of the few third-party collaborations that Jordan did releasing an Air Jordan IV shoe. 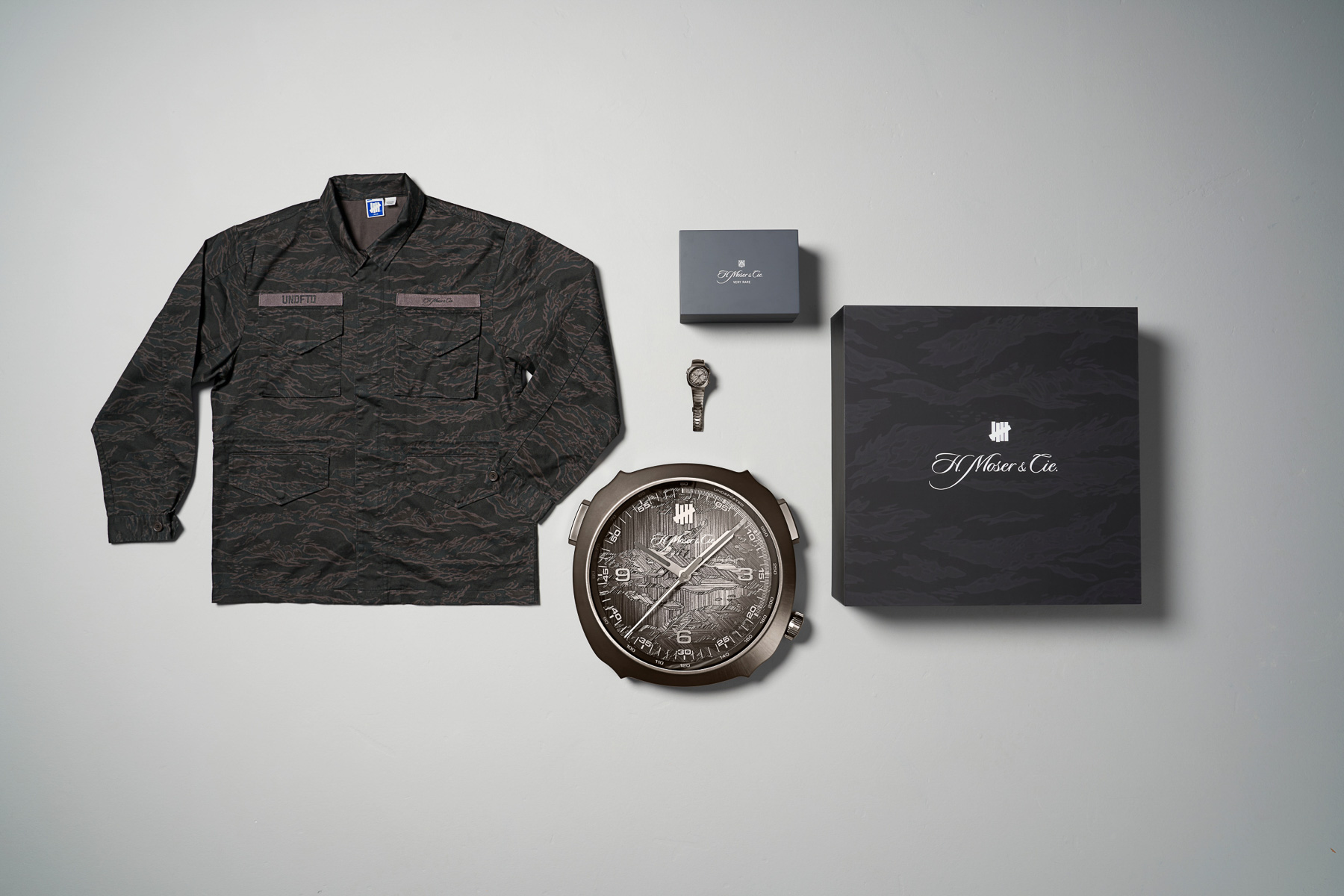 It’s just one of the many examples that made UNDEFEATED into one of the leading brands in the streetwear industry. It’s interesting to see how stores like Supreme and UNDEFEATED grew into brands that defined the world of streetwear. Because of that, the doors opened to many different collaborations with other companies. The collaboration with H. Moser & Cie. was the idea of Eric Cheng, one of the co-owners of UNDEFEATED. He is an avid watch collector and a fan of Moser, as well as a big fan of the Streamliner. 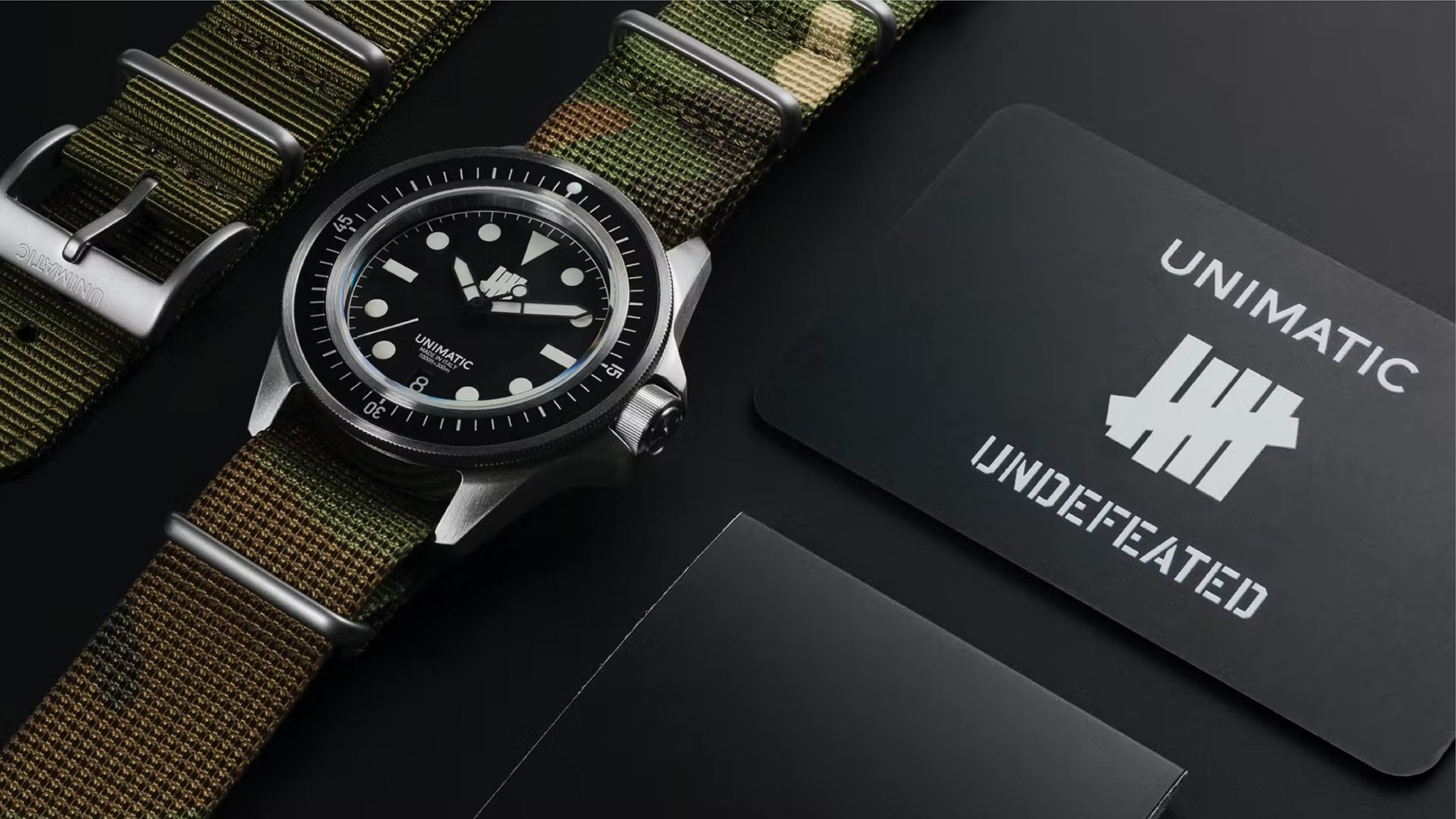 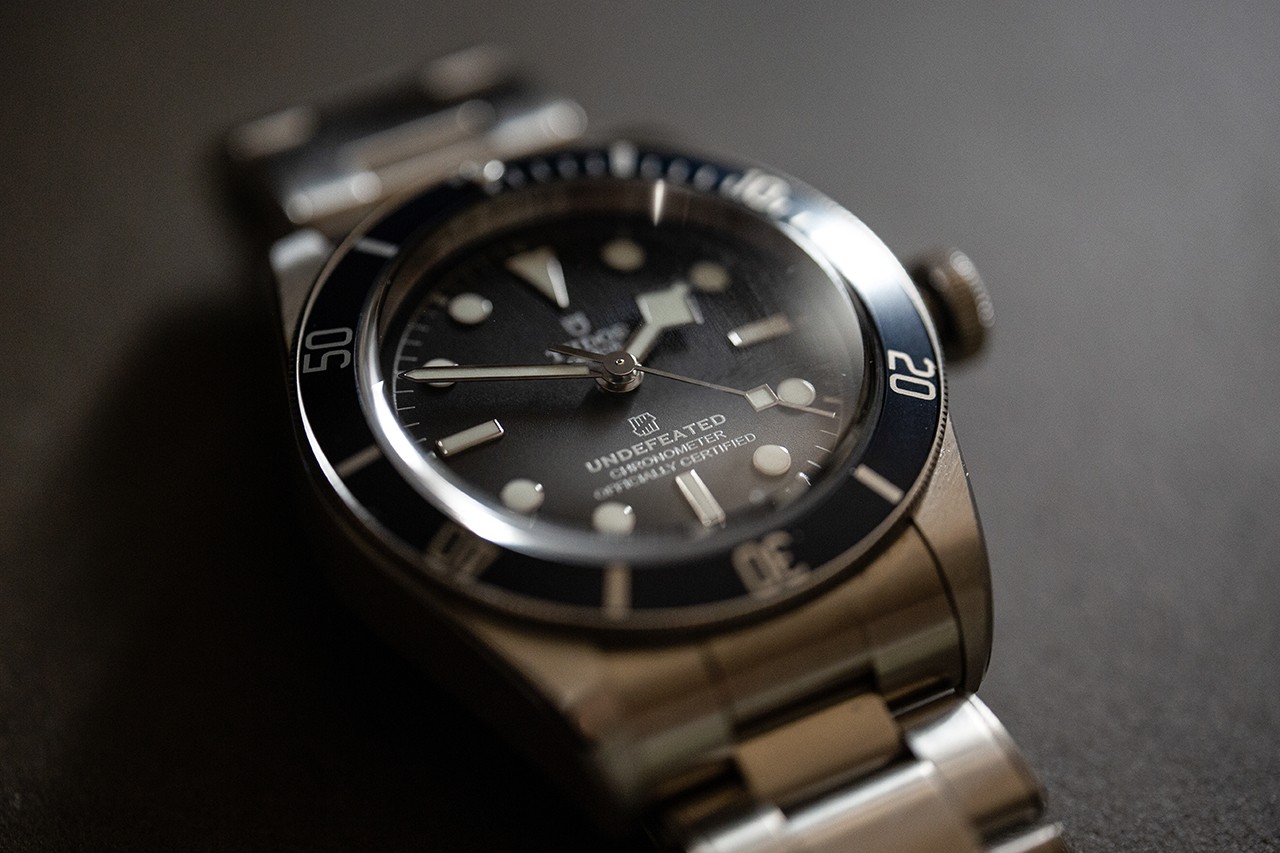 For the next step, UNDEFEATED and H. Moser & Cie. have teamed up. It’s a step into high horology that comes with expectations. As I mentioned, Eric Cheng is a Moser fan, and he contacted H. Moser & Cie. CEO Edouard Meylan about a possible collab. What both men found is an unconventional approach and philosophy that their brands share. So, it felt only natural to come up with a special version of the Streamliner Chronograph. This UNDEFEATED version of the watch incorporates some familiar elements for the people that know the brand. Now, let’s find out more. 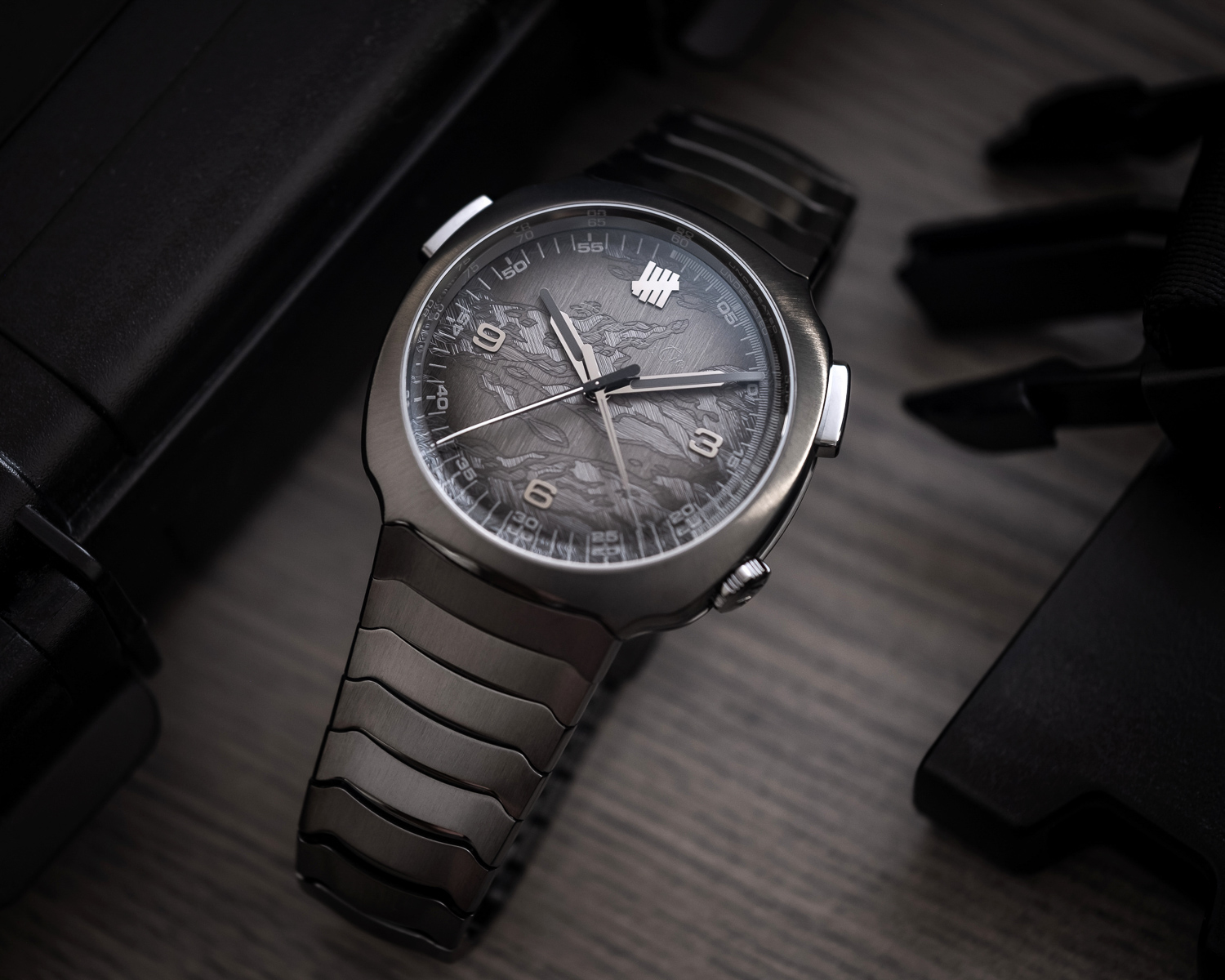 The Streamliner Chronograph first popped up in 2019 when Balazs visited Dubai Watch Week and spotted it on Edouard Meylan’s wrist. It was the first of the Streamliner models, and ever since Balazs’s review of the watch, we have seen some amazing other Streamliner variations. The flyback chronograph version of the Streamliner is still an incredible watch. Let’s remind ourselves of its brilliance. The watch features the characteristic 42.3mm cushion-shaped case that is 14.2 mm thick without the slightly domed sapphire. It is water-resistant to 12ATM and allows the chronograph and flyback function to be used underwater. The watch gets its name and design inspiration from the famous Streamliner trains that were in production from the 1930s until the 1950s. 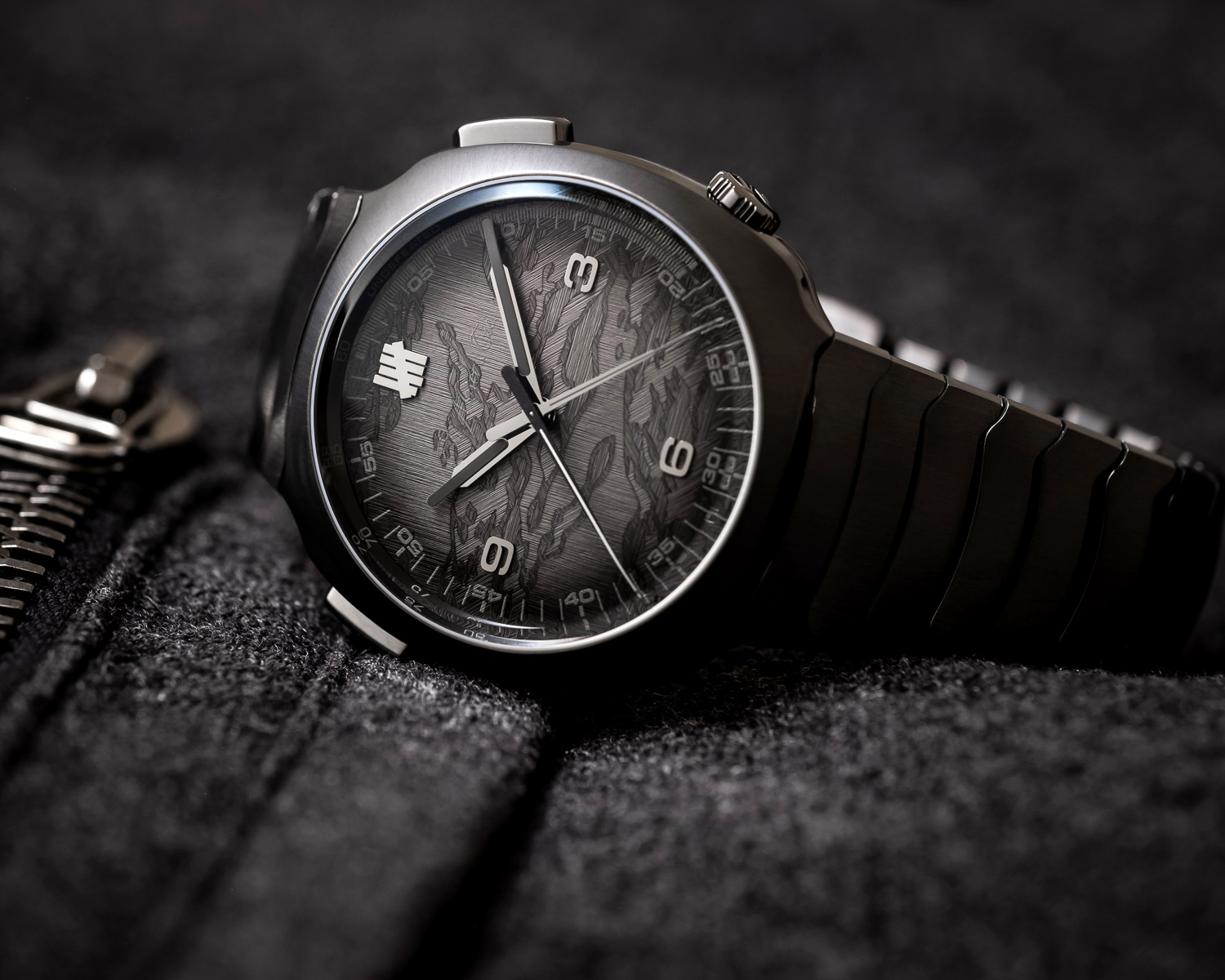 Further proof of that inspiration comes in the form of the unique integrated bracelet. The design is unique and intricate, making for a very comfortable watch on the wrist. Meylan explained that the Streamliner actually started with the bracelet while the rest of the design followed later. Now, where you normally would get a Streamliner in stainless steel with mostly brushed elements, for this new UNDEFEATED version, Moser introduces something new. The case and bracelet are still stainless steel, but they have received a dark gray DLC coating for a more dramatic effect. Meylan explains that the watch will develop its own patina slowly over time. 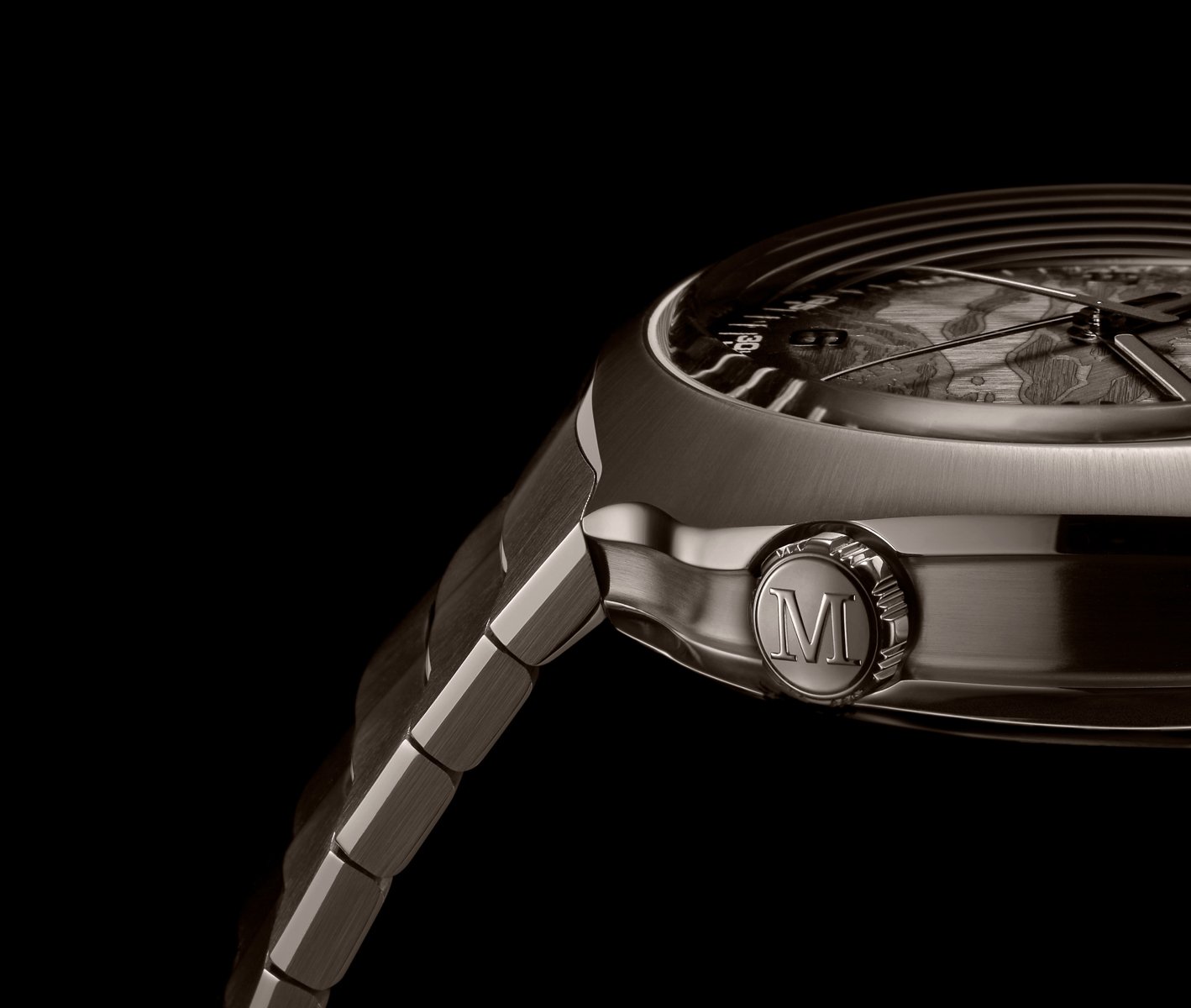 This dark gray aesthetic is accompanied by a unique dial featuring a Black Tiger Camo fumé effect. Camo motifs are something that UNDEFEATED is famous for, so it only made sense to integrate it into the watch. It is engraved on the dial and then given multiple layers of lacquer to create the color. In the last step, the finish is applied to the lacquer to get the fumé effect. The outer part of the dial features two different tracks. On the outer edge, you will find the gray tachymeter scale. The inner minute track is also gray for a stealthy overall look. 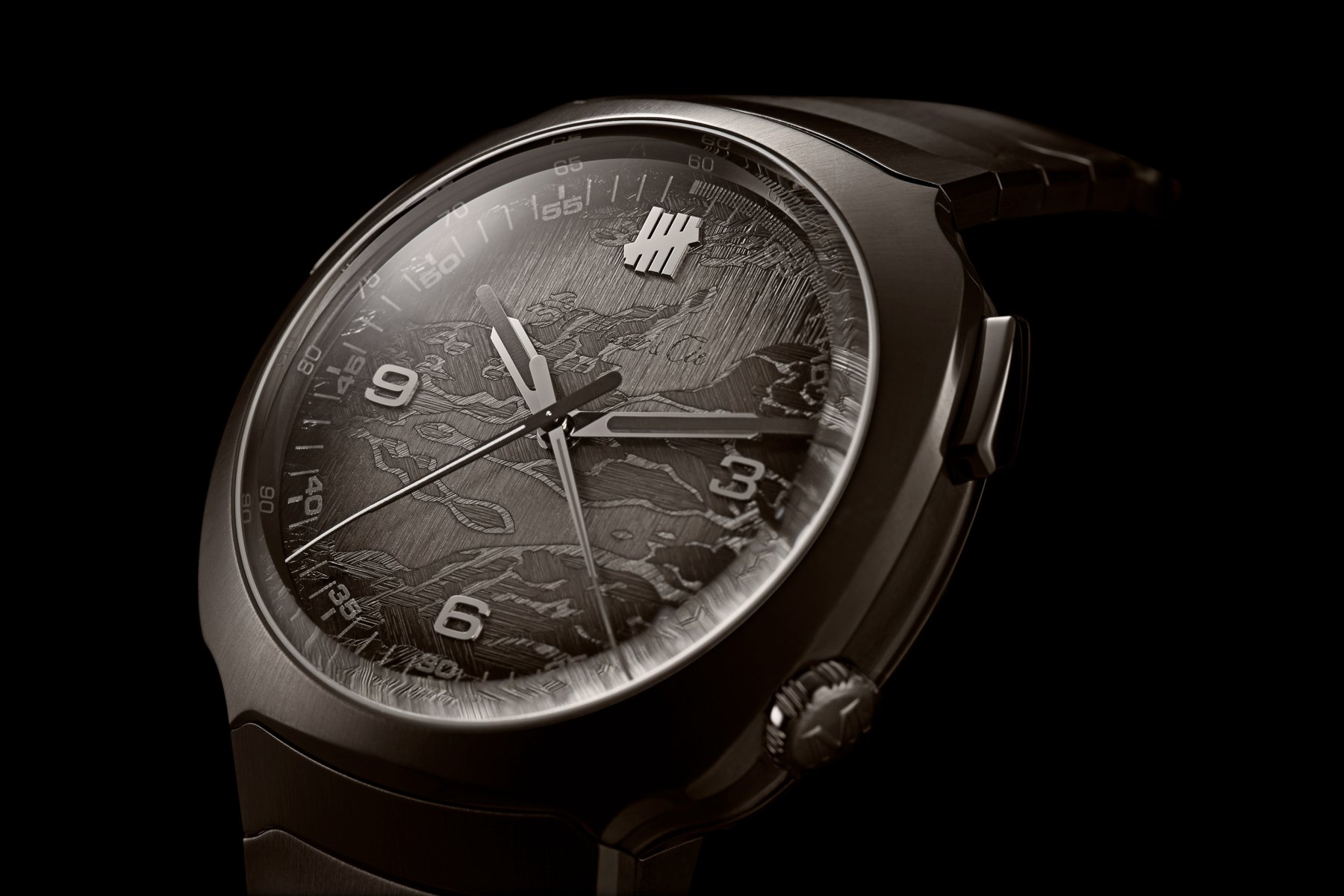 Another UNDEFEATED signature element is the brand’s “Five Strike” logo at 12 o’clock. It is executed in black rhodium-plated steel and replaces the usual “60” numeral on the Streamliner Chronograph. Let me just make a little sidestep here for the music fans. This logo always reminds me of the logo of Black Flag, a hardcore punk band that I love. Let’s just say I raised an eyebrow when I saw this appropriation of the band’s logo. While some say it is just a tally mark of the number five, just have a look at both logos and you’ll see what I mean. But I have grown to appreciate the logo over time in all honesty. Just below it, you will find the H. Moser & Cie. signature discretely executed in light gray. 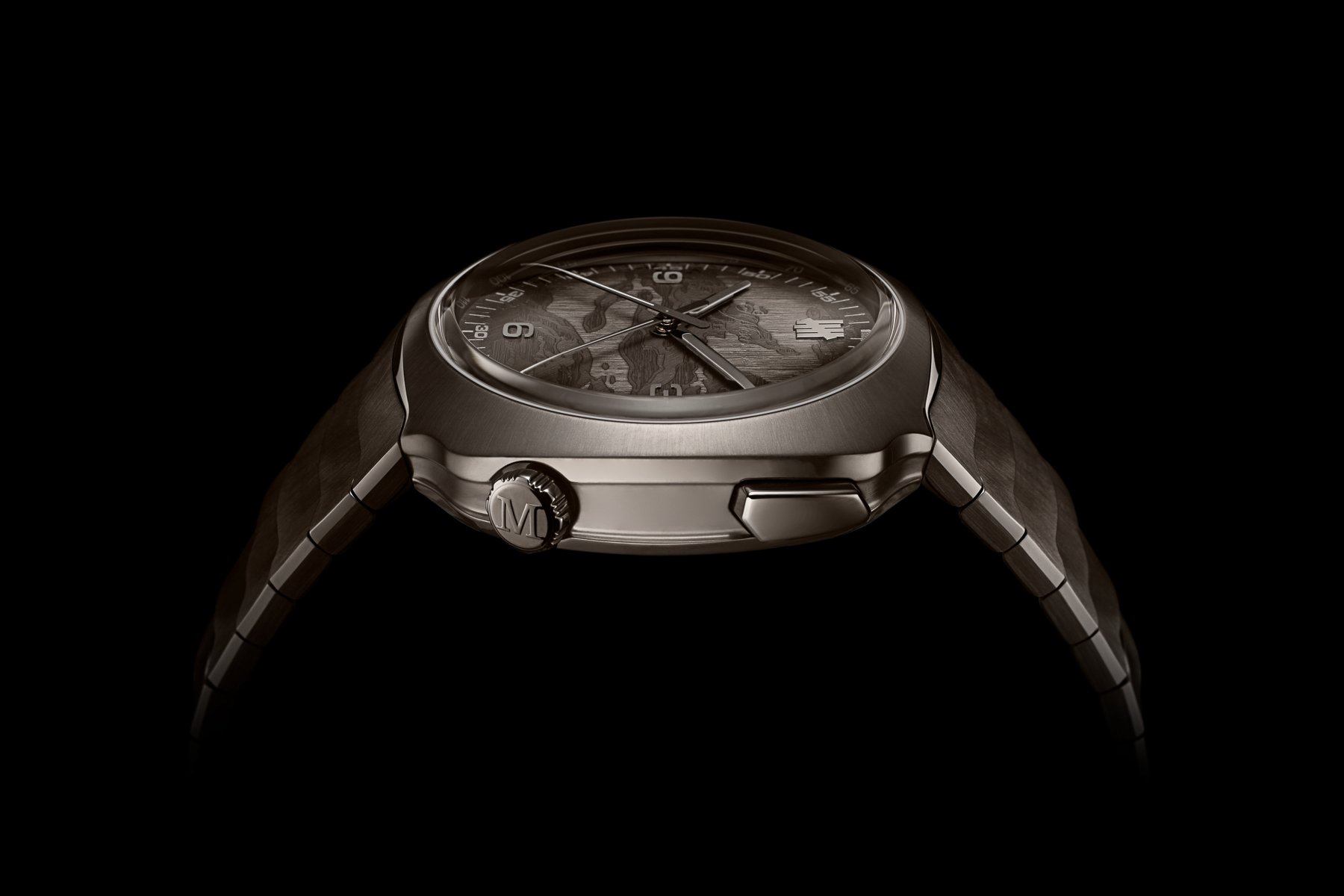 A stealthy aesthetic with a lot of details

The hands are also different compared to the regular Streamliner Chronograph. The curved chronograph hands have a thicker base and thinner tips. For the regular hours and minutes, H. Moser & Cie. produced special hands with a three-dimensional curved shape. The hands are created with two different sections and feature inserts of anthracite-gray Globolight. This innovative ceramic-based material contains Super-LumiNova so the hands light up in the dark.

On the sides of the case, you will find the chronograph pushers at 2 and 10 o’clock. And as we know from the regular model, the crown is at 4 o’clock and features an “M” engraved in relief. The integrated bracelet is a thing of beauty. If you have seen it up close, you know how well designed and executed this bracelet is. The dark gray DLC coating gives it a distinct presence that adds to the overall stealthy image of the watch. The bracelet comes with a folding clasp with three DLC-treated steel blades and an engraved Moser logo on the closing link. 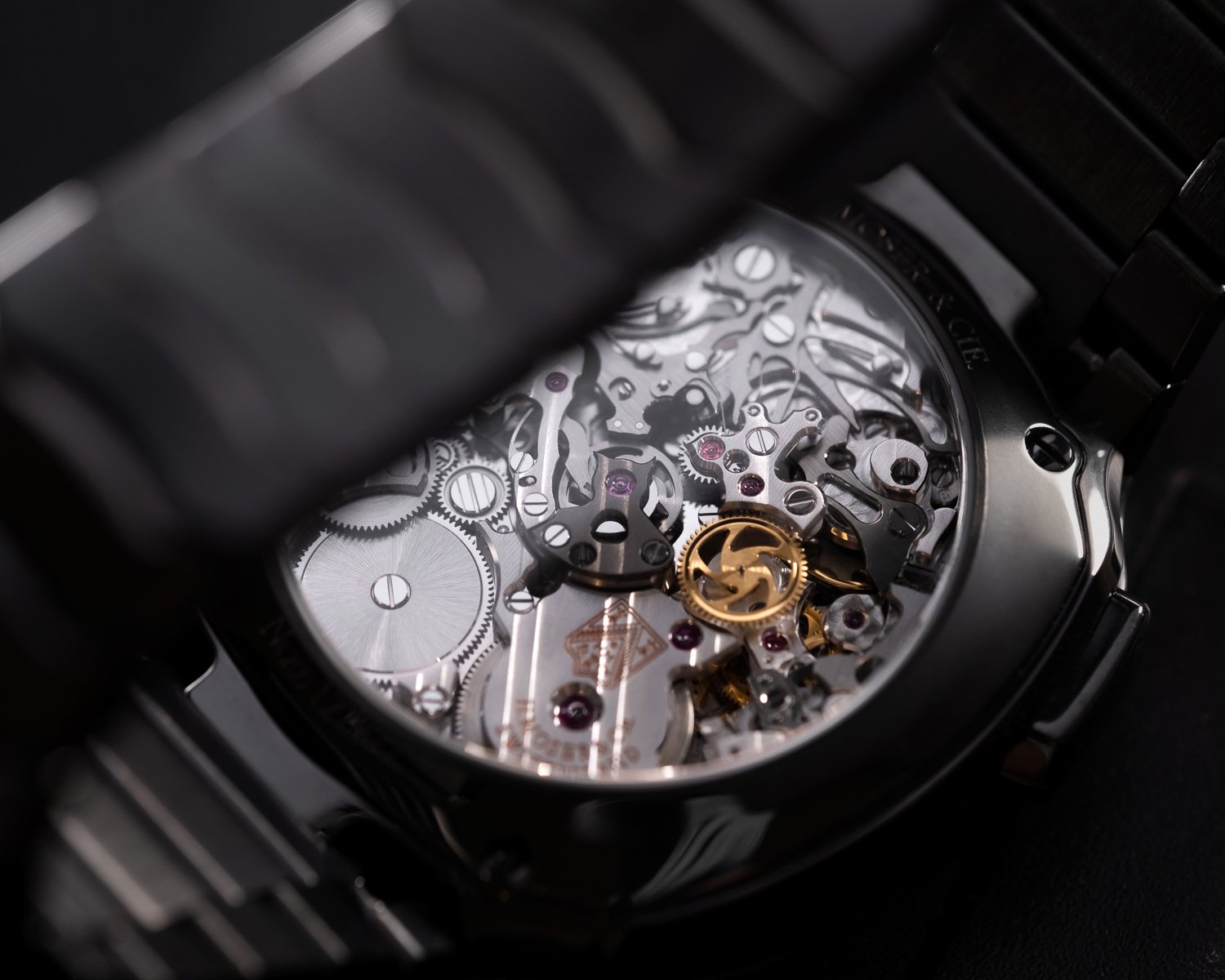 Through the sapphire case back, you can watch the Calibre HMC 902 in action. This automatic chronograph movement was developed with Agenhor for H. Moser & Cie. and consists of 434 parts. It operates at 21,600vph, has 55 jewels, and provides a power reserve of 54 hours. As Balazs explained in his review of the regular model, the HMC 902 is the world’s first automatic chronograph with a central display to feature a flyback function for the minutes and the seconds. 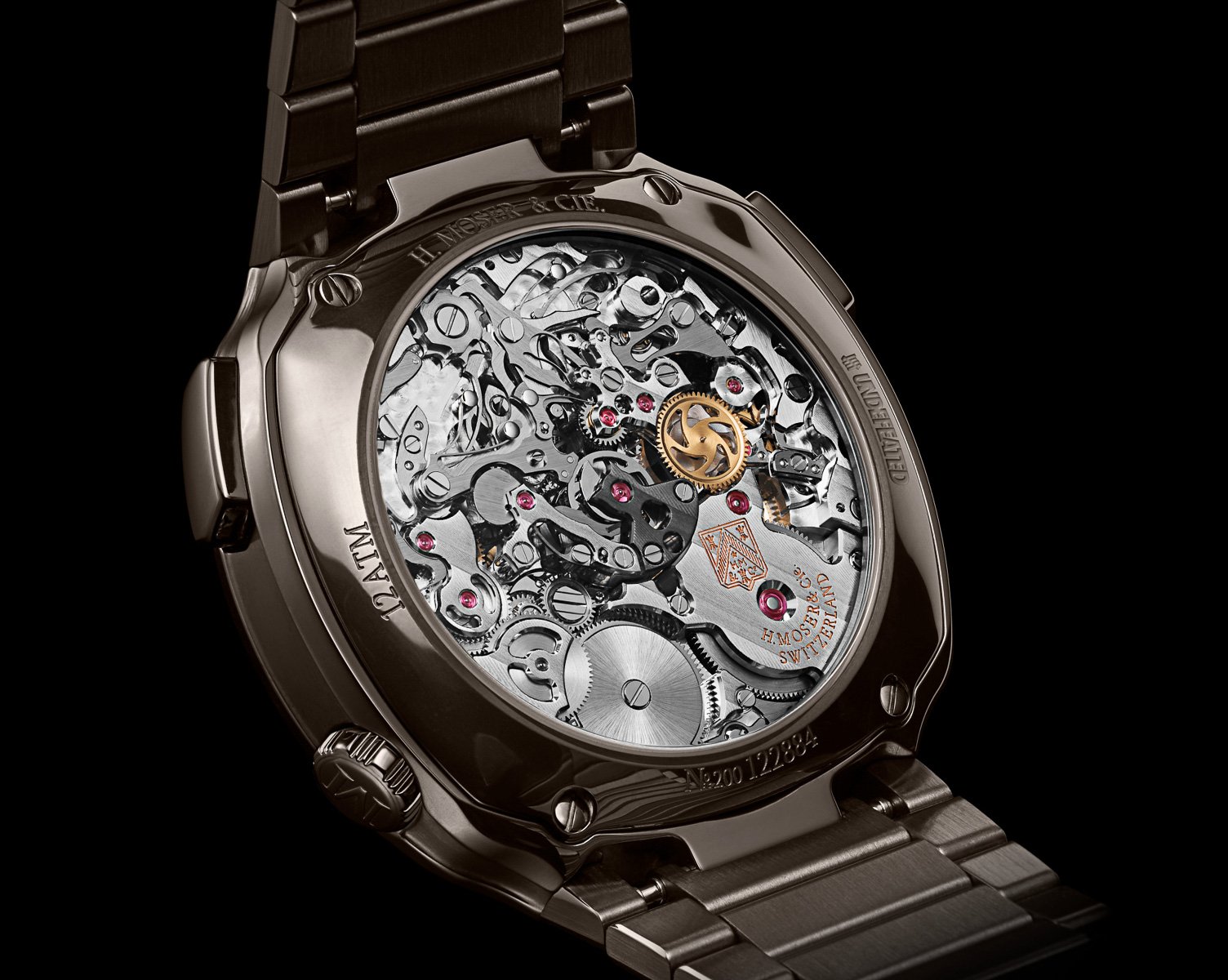 But the innovations don’t end there. Additionally, the automatic movement’s oscillating weight is located between the movement and the dial. This allows the owner to admire the beauty of the caliber without losing out on any of an automatic movement’s benefits. And I must say, it’s an absolute stunner of a movement! With the dark coating of the watch, it really pops through the crystal. 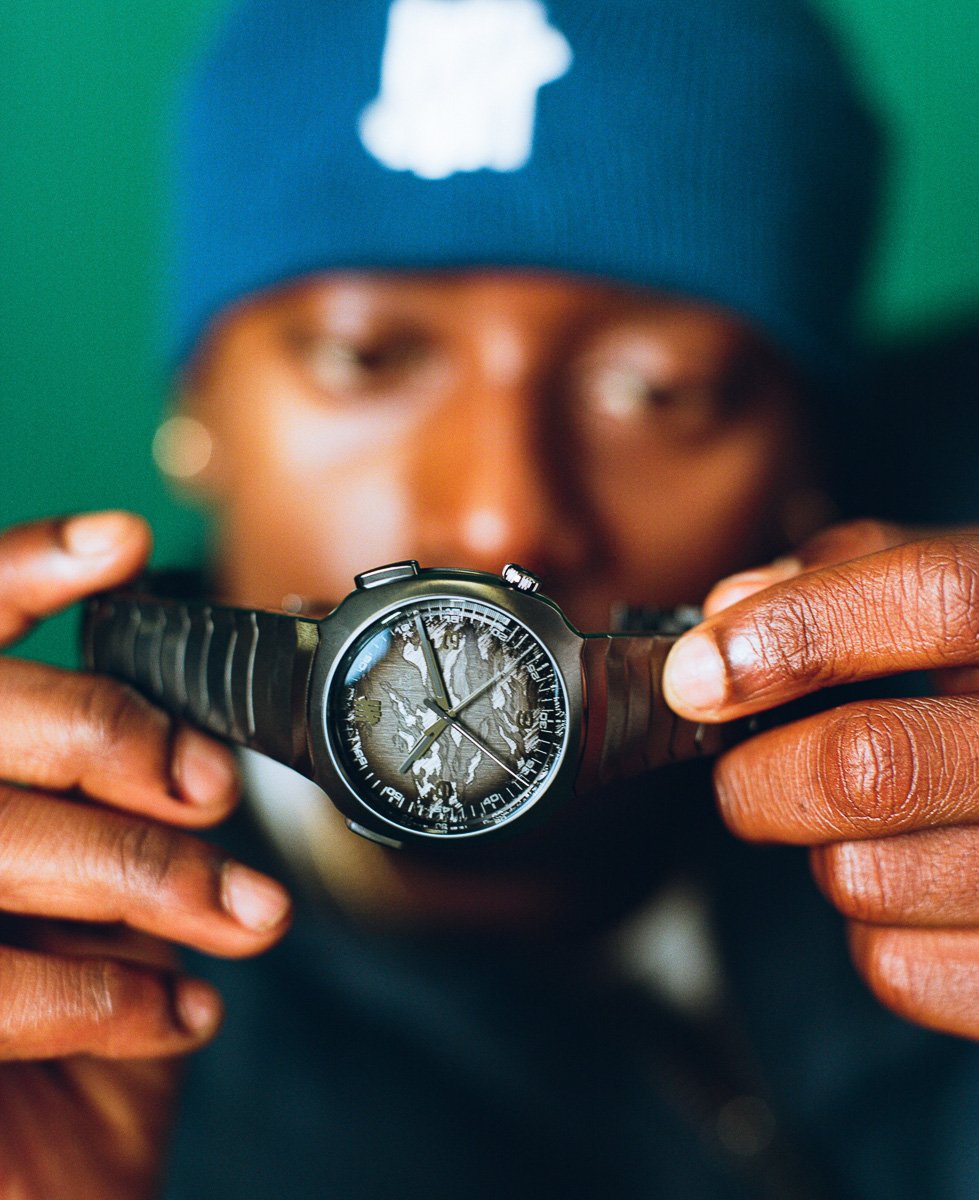 H. Moser & Cie. will produce 76 pieces of the Streamliner Chronograph UNDEFEATED. The price for one of these unique watches will be €52,500. Included in the price are the watch itself, a wall-clock version of the watch, and a “friends and family” jacket developed exclusively by UNDEFEATED. The Streamliner Chronograph UNDEFEATED will be available online and in selected UNDEFEATED stores starting on June 22nd, as well as on the H. Moser & Cie. online store. When it comes to my first impressions of this watch, I greatly appreciate the collaboration between the two brands as it is proof of the wide reach of mechanical watches. 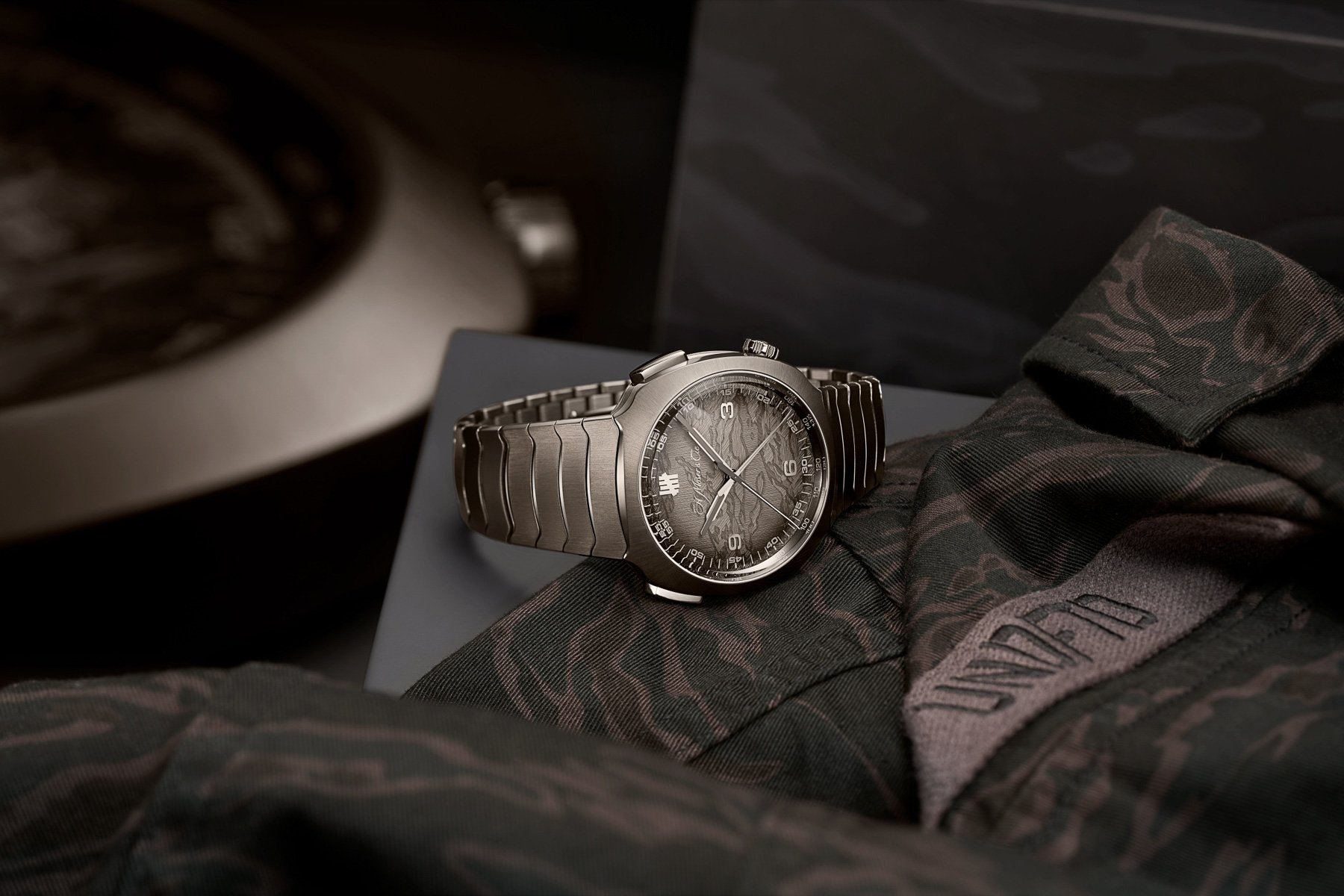 Additionally, it is great to see the Streamliner Chronograph in a different execution than the regular version. Would I pick it over the regular model? The answer to that is a simple one. These collaboration timepieces are for the true fans of both brands. As I am no longer a dedicated sneakerhead, this is not a watch that I would pick over the regular model. I am more than sure, however, that there are 76 dedicated fans of UNDEFEATED who will love this brilliantly executed and very expensive high-horology timepiece from one of my current-favorite watch brands. I have to hand it to Edouard Meylan and his team at H. Moser & Cie. They always manage to surprise us and come up with something special, and this Streamliner Chronograph UNDEFEATED is no exception.

For more information, visit the H. Moser & Cie. website or the UNDEFEATED website. Additionally, let us know in the comments section what your thoughts are on this collaborative effort.

Hot Topics
Laventure Automobile Chronograph With A Proprietary Movement — Marking A Huge Leap Forward For One Of The Industry’s Most Promising Brands
155 comments
Fratello Exclusive: An Inside Look At The MoonSwatch Production Facilities
75 comments
We Talk To Swatch Group CEO Nick Hayek About The MoonSwatch
50 comments
Selling Your Watch To A Dealer Or Trading It In — Tips From A Former Watch Dealer
49 comments
Summer Splash — Round 2 : Jorg’s Tudor Pelagos FXD Vs. Lex’s Hublot Big Bang Integral Ceramic Sky Blue
47 comments
Popular
The Ultimate Sports Rolex – The Explorer II Reference 1655
Robert-Jan Broer
15
Rolex Submariner Hulk versus Seiko SLA019 : Shades of Green
Michael Stockton
24
You Asked Us: Nomos Orion as a dress watch?
Gerard Nijenbrinks
7