The first time I saw the new H. Moser & Cie. Streamliner Flyback Chronograph was during Dubai Watch Week, just a few months ago.

I think it was my main man, Lukasz, from Ch24.pl, who drew my attention to that quirky steel thing that Edouard Meylan, CEO of H. Moser & Cie.) was trying to hide under his cuff. Without much success, I must add. A Moser on a bracelet? This has to be something new. I had to check it out. After a short persuasion, Ed finally gave in, took the thing off, and handed it over. First impression: WOW. Second impression: This does not look like a Moser at all. Third impression: Wait a minute; it is indeed a Moser, but with a twist. The reason for my initial confusion was the look of the Streamliner. The case shape, the bracelet, the huge brushed steel surfaces were all new. 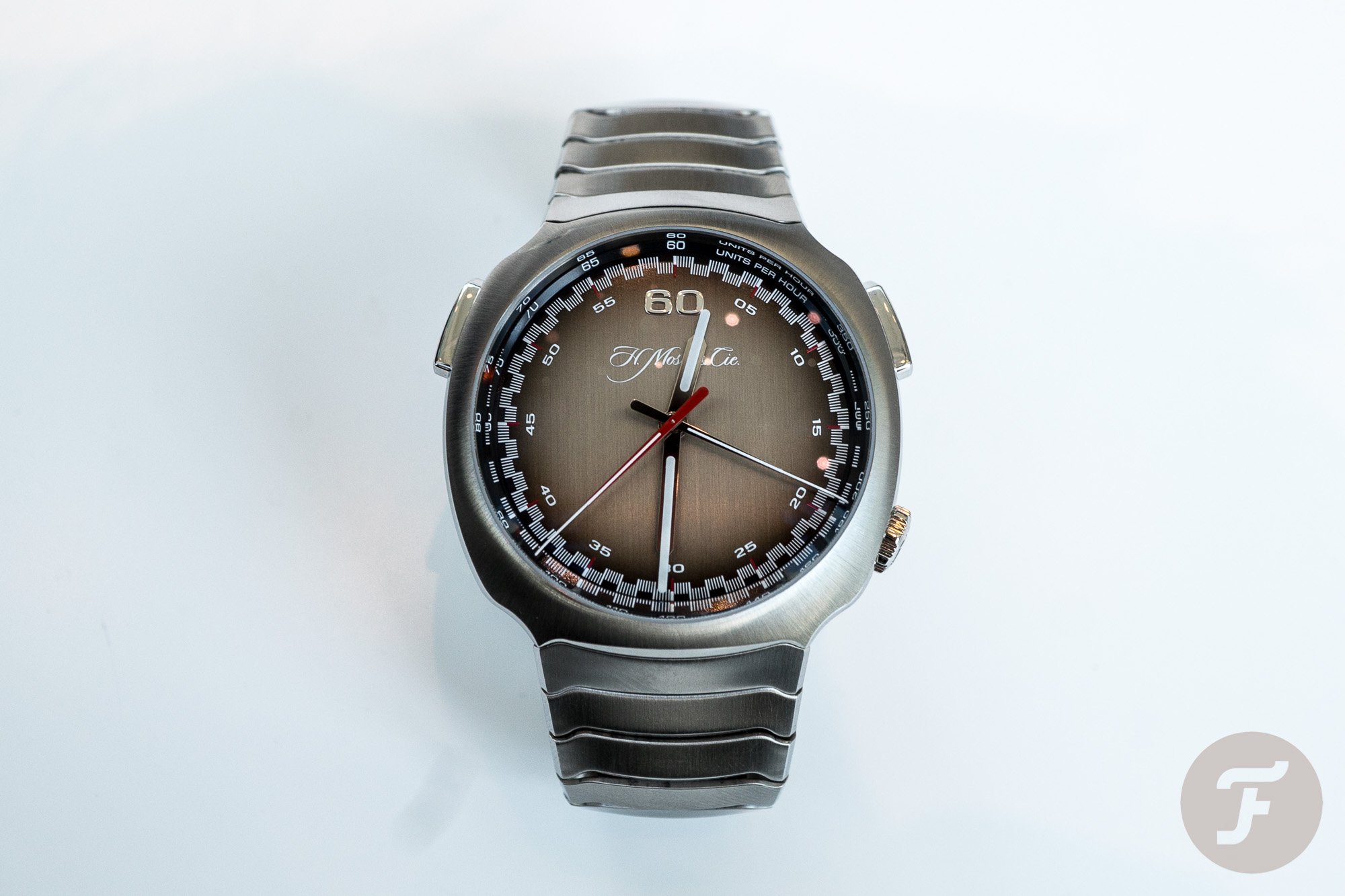 I believe we can all agree on the fact that this watch does not look like anything we’ve seen from the brand before. It’s 2020, though — a new decade — and H. Moser & Cie. has chosen to celebrate this with a timepiece that is as new as it gets. Let’s start in the beginning: The Streamliner is a brand-new model line next to Moser’s already existing ones, which are the Endeavour, Venturer, Pioneer, Swiss Alp Watch, and Heritage. What is more evident than that, however, is the design of the watch. Moser created a new case and integrated bracelet for this timepiece.  As a matter of fact, they started their design process with the bracelet and then moved on to the case. Now I’m not sure if it’s standard procedure when it comes to designing a watch, but judging by the final product, the guys at Moser did a great job. 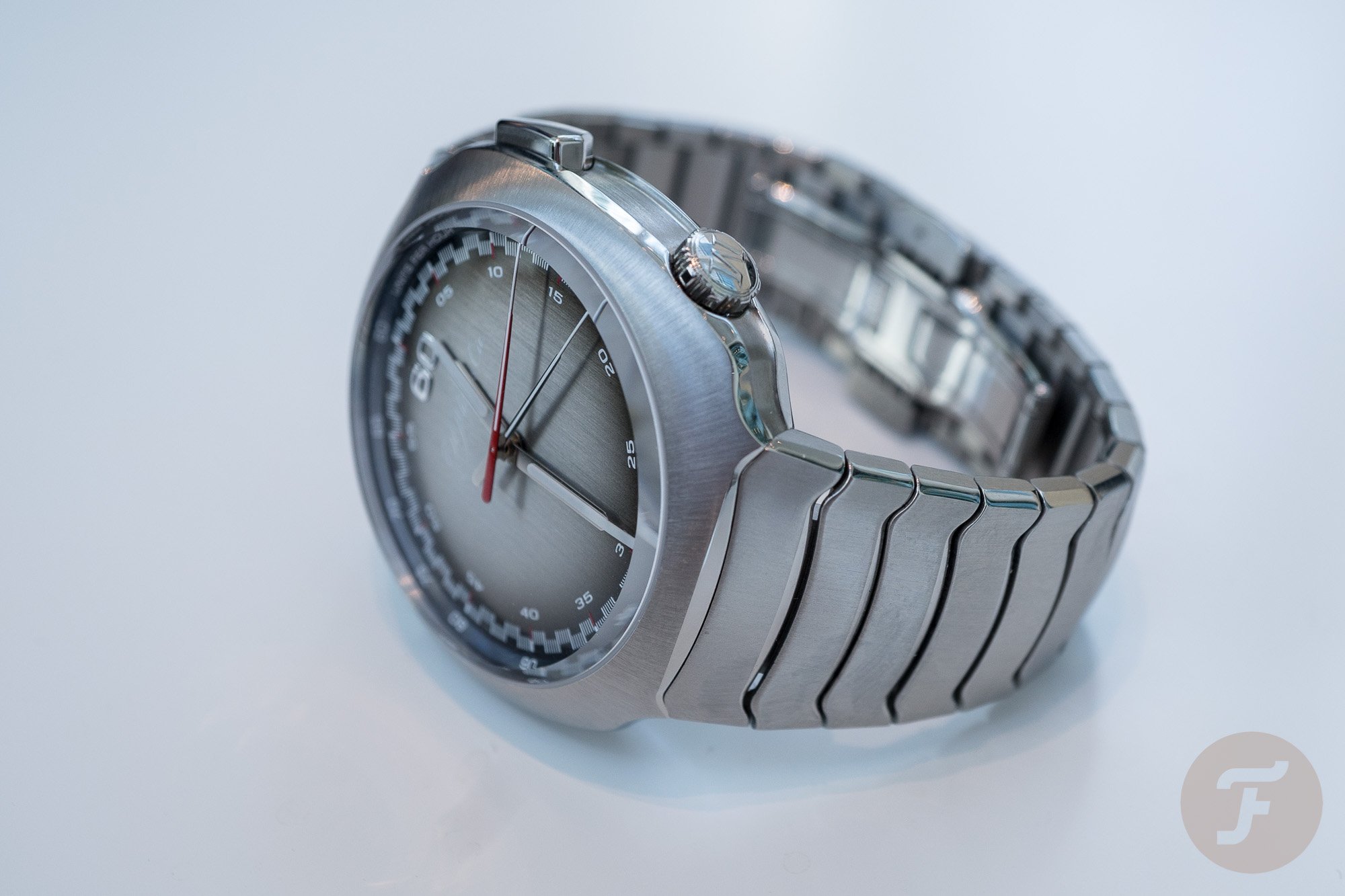 If you don’t know that it’s a Moser, you could think that the watch comes from the funky 1970s. As far as the details are concerned, we have a 42.3mm steel, cushion-shaped case, and 12 ATM of water resistance. While I’m not sure that many of its future owners will use this, one can operate the Streamliner Flyback Chronograph underwater. I guess when we talk about the shape, we have to mention the name. Streamliners were trains from the 1930s to 1950s that were designed with air resistance reduction in mind. The idea was later applied by the car industry too. The Moser Streamliner incorporates this design approach with a touch of 70s flair. The chronograph pushers are at 10 and 2. The only feature that throws off the symmetry is the crown, which is at 4. The surface is mostly brushed with minimal, polished elements. 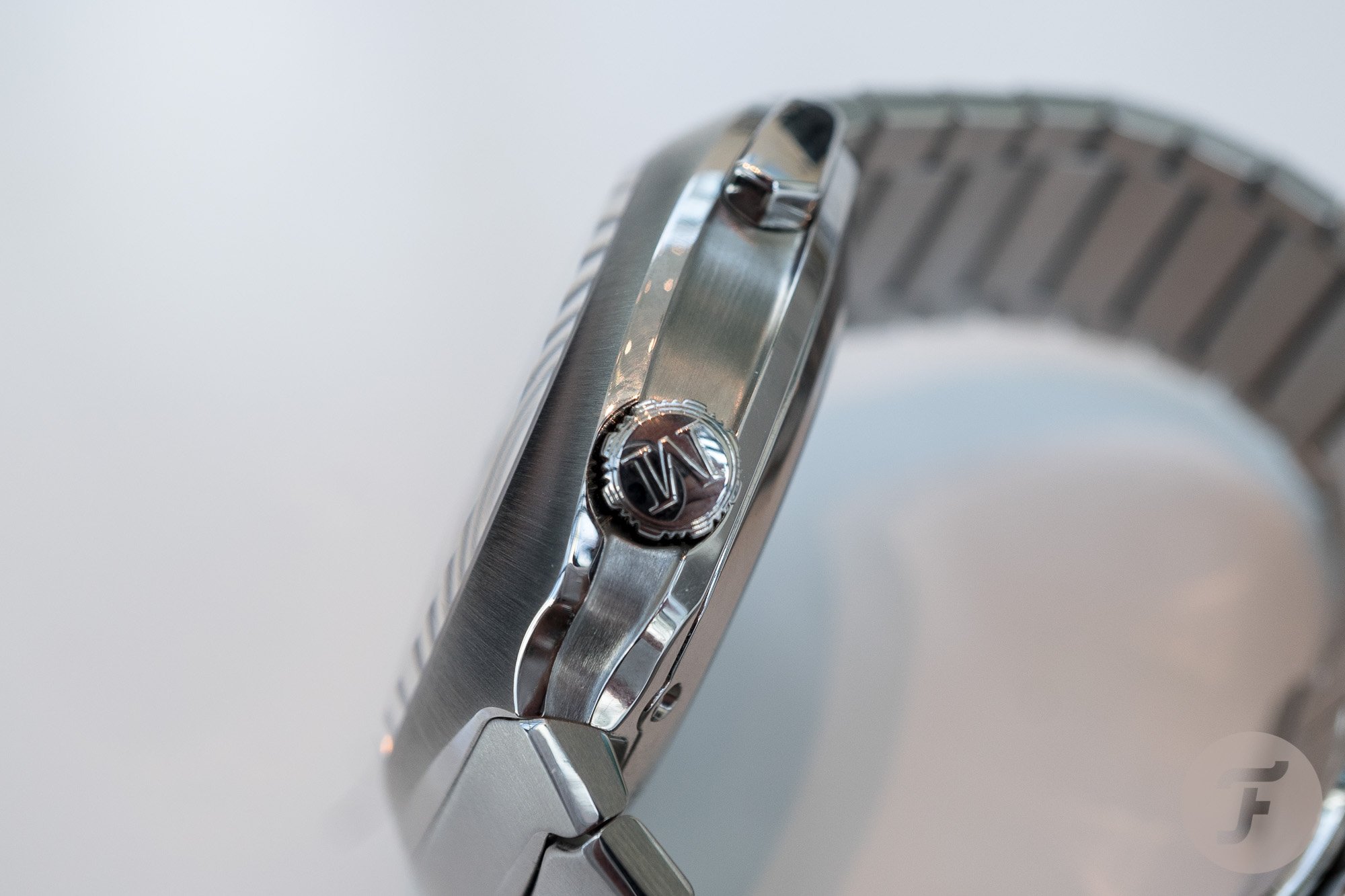 Let’s not forget that a big part of the Moser Streamliner’s aerodynamic look comes from the integrated bracelet.  As Edouard Meylan, explains: “We started with the bracelet, comfortable, elegant and different. We then designed this model around the chronograph function, as this was what we really wanted to highlight.” When I first had the watch in hand, the bracelet reminded me of the 1970s lobster bracelets by Omega and Tissot. While I do not know how difficult those were to produce, the Moser bracelet is very intricate in construction. The lines look fluid and organic, following the shape of the case, making it look clean and straightforward. Vertical brushing decorates the links with polished surface in-between. Another nod to the 70s is the sunray finishing on the Streamliner’s bezel, a typical decoration of that era. 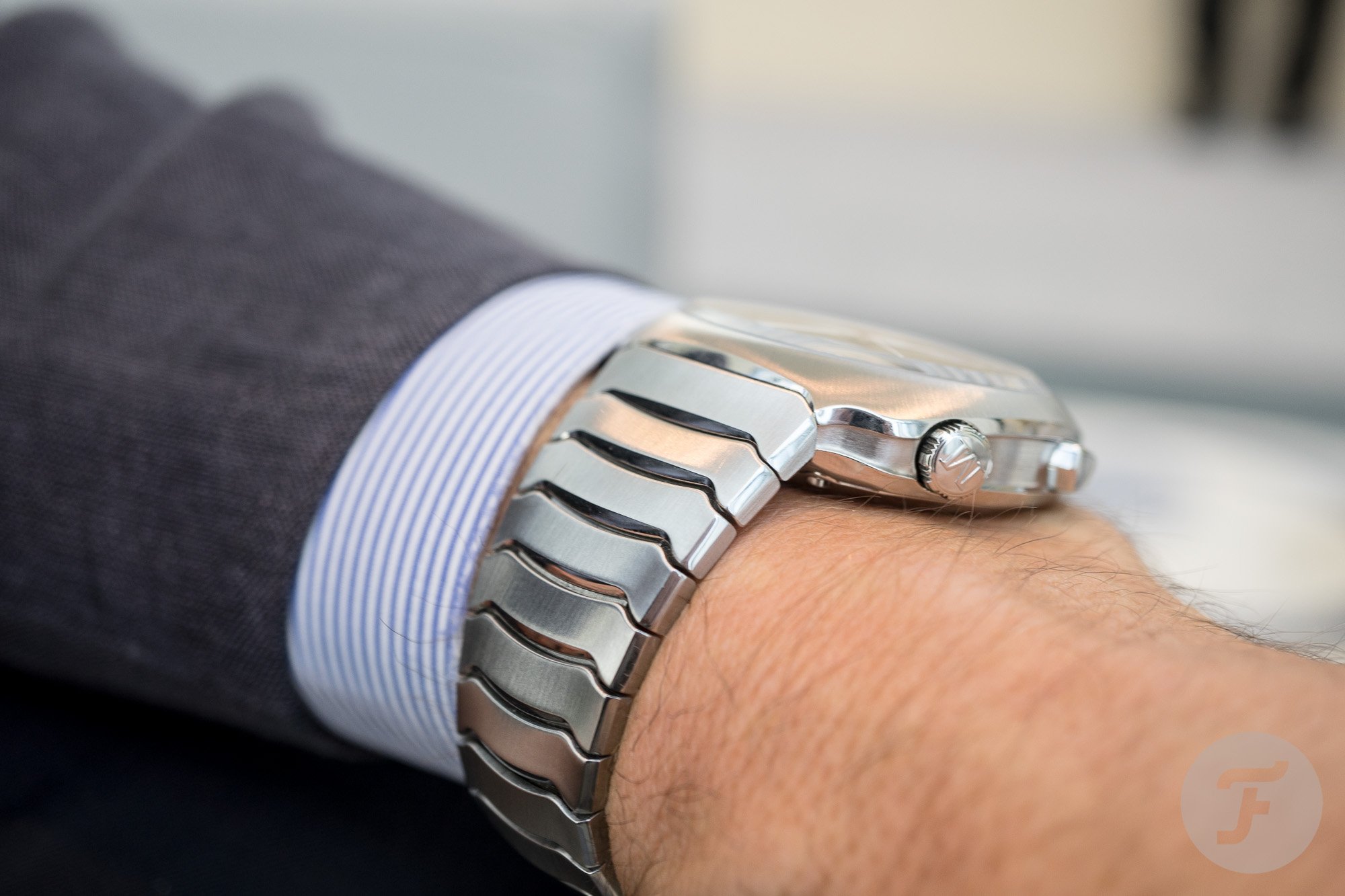 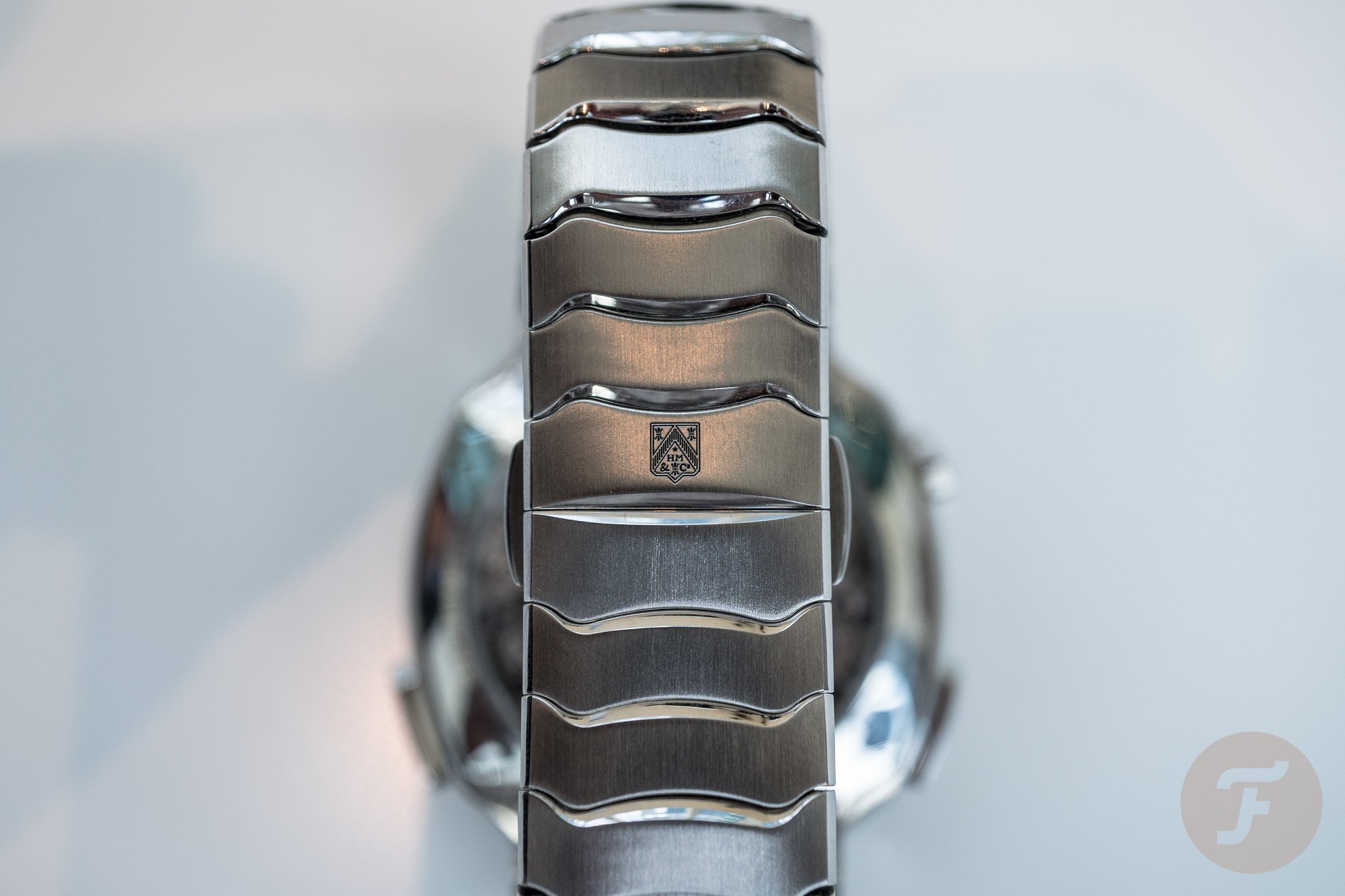 If you look at the movement, you might find it familiar. The Singer Reimagined models, another brand that produces neo-vintage watches, have a very similar caliber – visually speaking, at least. This is no coincidence. The Moser Streamliner’s caliber (HMC 902) was developed in partnership with Agenhor SA, which is the same company responsible for the Singer movement. This, however, is a unique caliber. The HMC 902 is the world’s first automatic chronograph with a center display to feature a Flyback function for the minutes and the seconds. While the design is sophisticated, the result is simple and legible. To achieve this, Agenhor and Moser had to rethink and bend the rules of chronograph technology. The automatic movement’s oscillating weight is between the movement and the dial. Allowing the owner to admire the beauty of the caliber, without losing out on any of an automatic movement’s benefits. 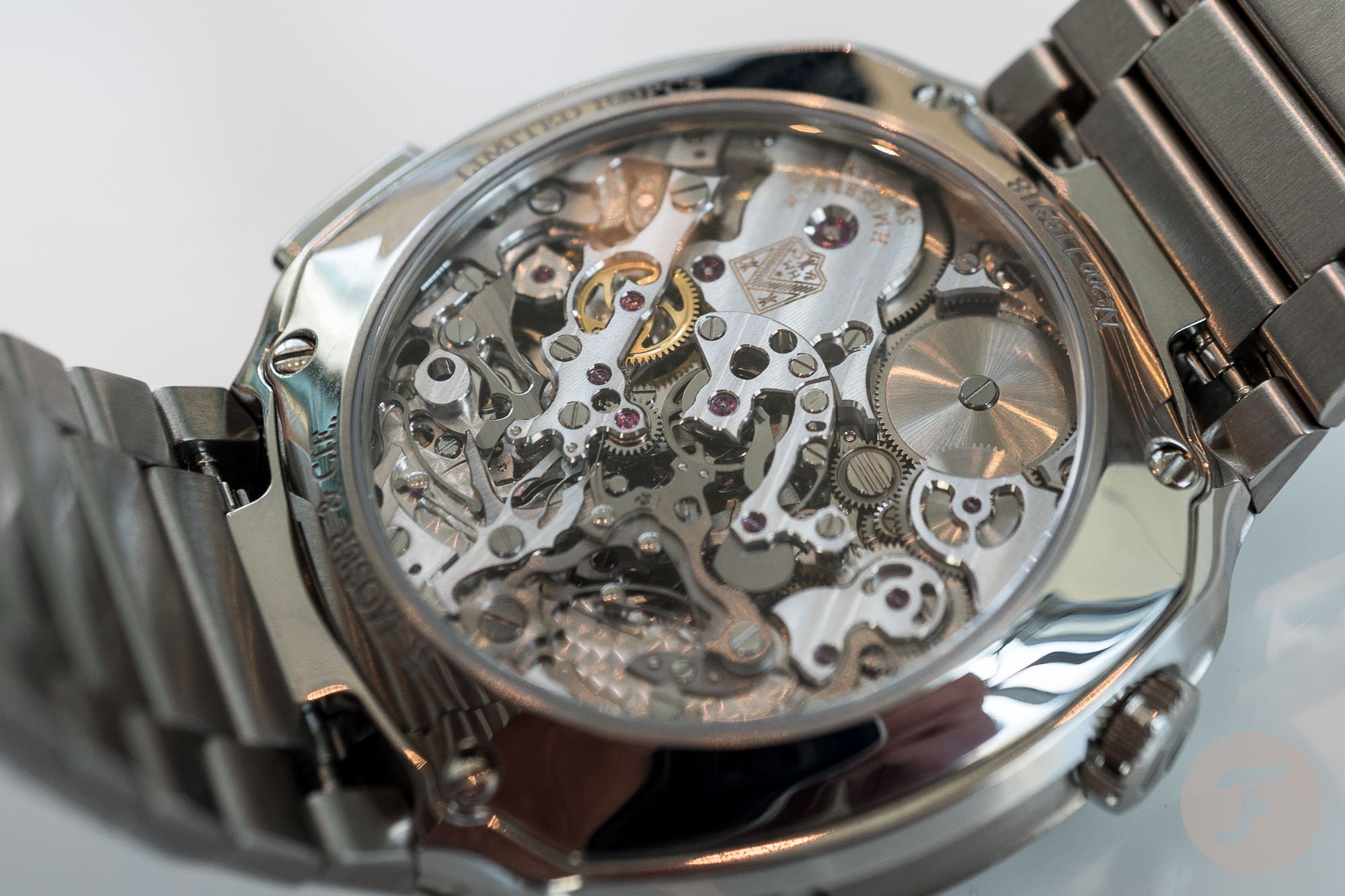 Those who are familiar with H.Moser & Cie know that for them, dials are just as important as the rest of the watch. Of course, this had to be the case with the Moser Streamliner too. The brand’s signature feature is fumé dials. This time, however, they went one step further. The Streamliner’s new anthracite grey dial has not only been given the fumé treatment, but is also griffé (French for scratched). 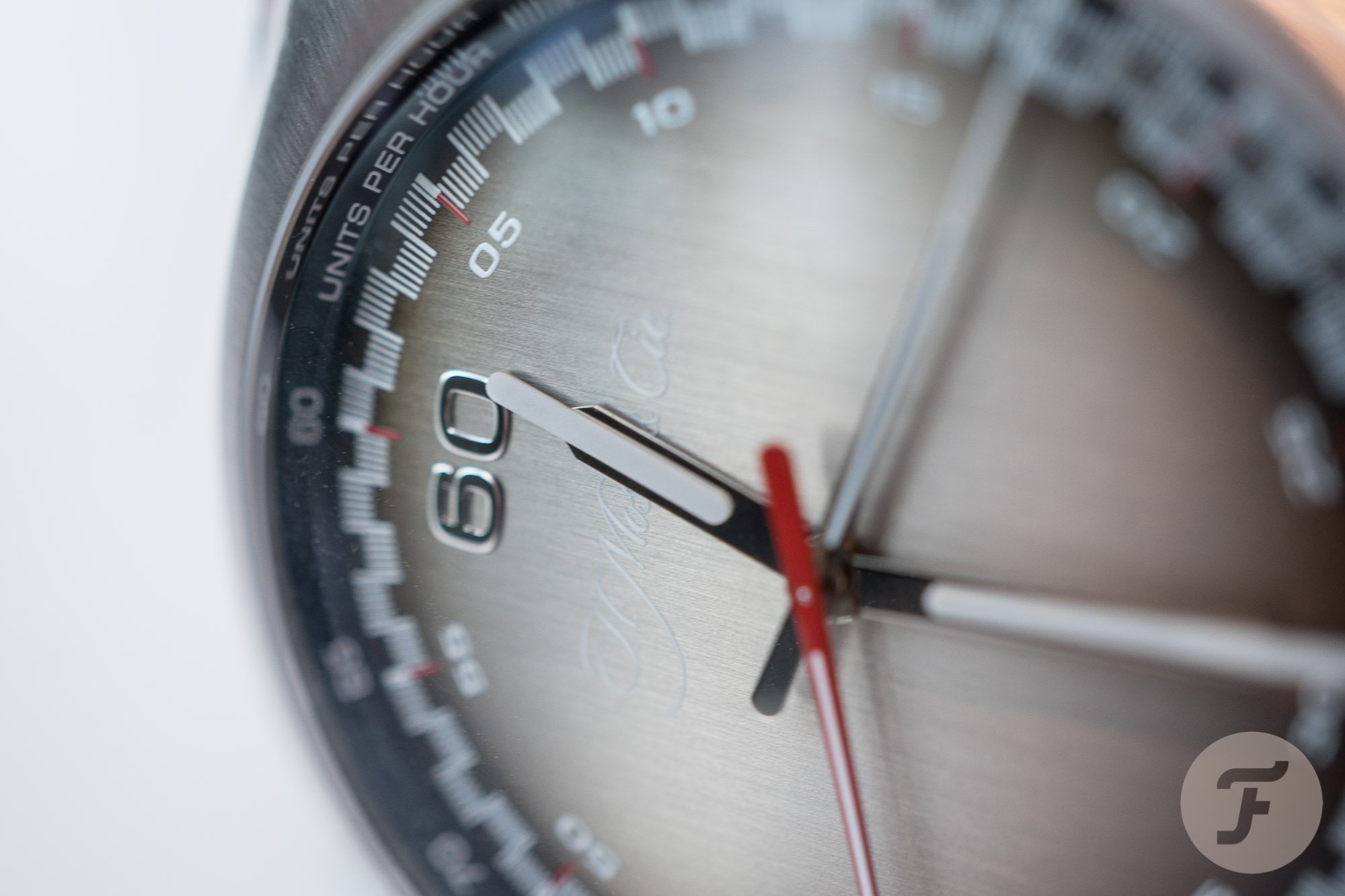 The vertical lines that decorate the dial result in not only texture and depth for the display, but also a continuation of the vertical brushing present on the bracelet. This gives an impression of stylistic harmony as well as one of activity, which is appropriate given that the overall design of the dial takes inspiration from stopwatch dials of the 60s and 70s. The chronograph hand reminds us of counters of measuring instruments, thick bases with fine tips. For the first time, Moser uses 3-dimensional curved hour and minute hands, with two sections and ceramic-based Globolight inserts.