A little while ago we took a closer look at some of H. Moser & Cie’s 2019 SIHH novelties. I’m talking about the Endeavour Centre Seconds Concept Blue Lagoon, a beautiful and low-key albeit 100% Haute Horlogerie timepiece. If you are familiar with the brand H. Moser & Cie you probably know that they can be a tiny bit more daring from time to time. We all remember their huge marketing success/uproar the Make Swiss Made Great Again campaign. It stood for something that a lot of brands seem to have forgotten about along the way. Not to mention that those red hats were among the most wanted items with watch journalists for a while. The great thing about Moser is that even though their stories are edgy and often bold they don’t take themselves too seriously. Just look at the H. Moser & Cie Swiss Alp Watch Concept Black. 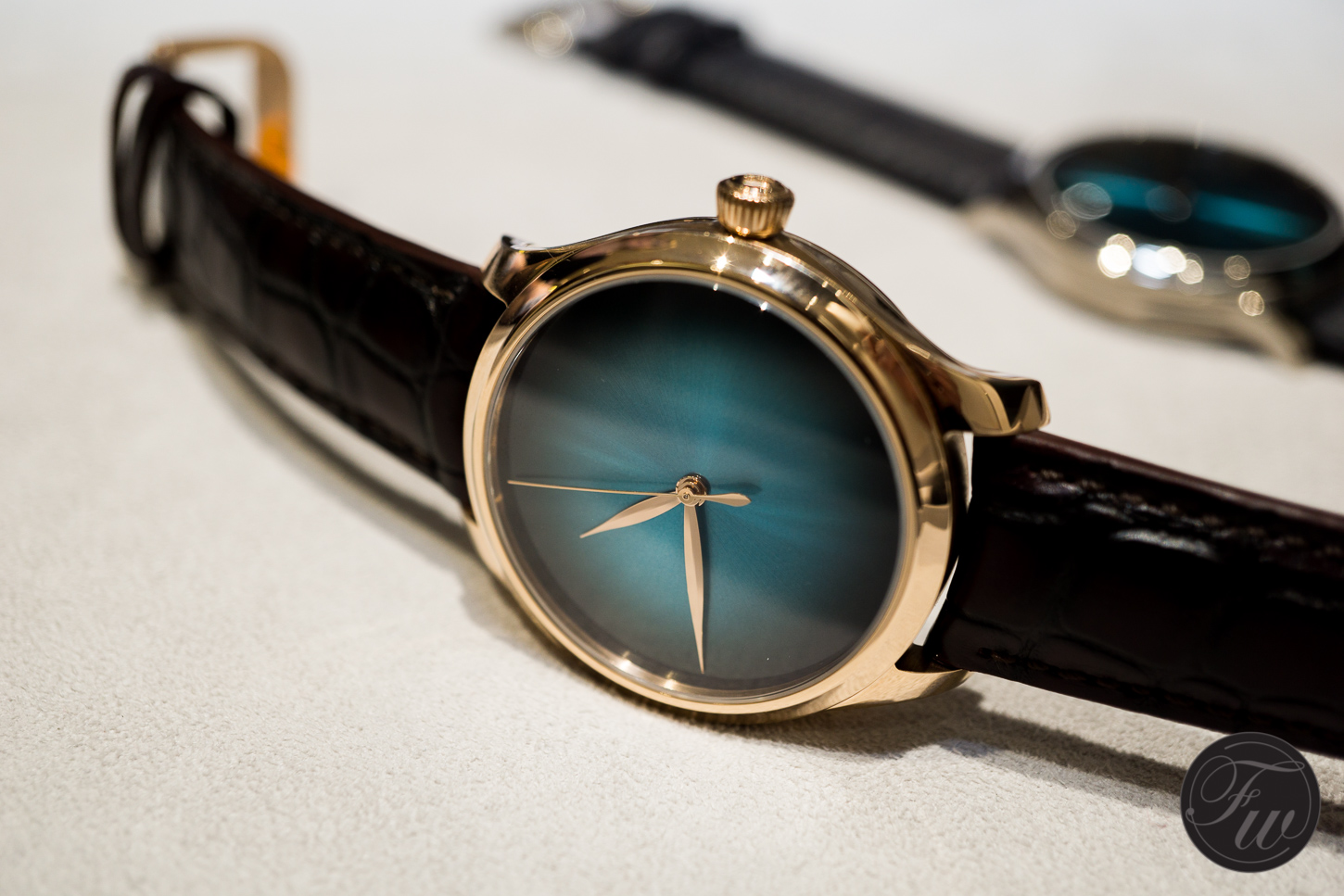 Let’s draw a quick timeline here. April 24, 2015, Apple releases its ground-breaking new product, the Apple Watch. It becomes the most sold wearable device already in the second half of 2015. About 9 months later (January 2016) H. Moser & Cie comes out with their Swiss Alp Watch. It serves as a “homage” to the Apple Watch. Or was that device from the California tech giant that final blow for Moser? Probably, because a year after that the above mentioned Make Swiss Made Great Again campaign was born. A gimmick with a very serious message. Let’s make Swiss watchmaking what it used to be. It can’t and won’t stop the Apple Watch wearers. The best you can do is convert them, to wear a real timepiece on their left wrist and the Apple Watch on their right. Like one of us does, here at Fratello. 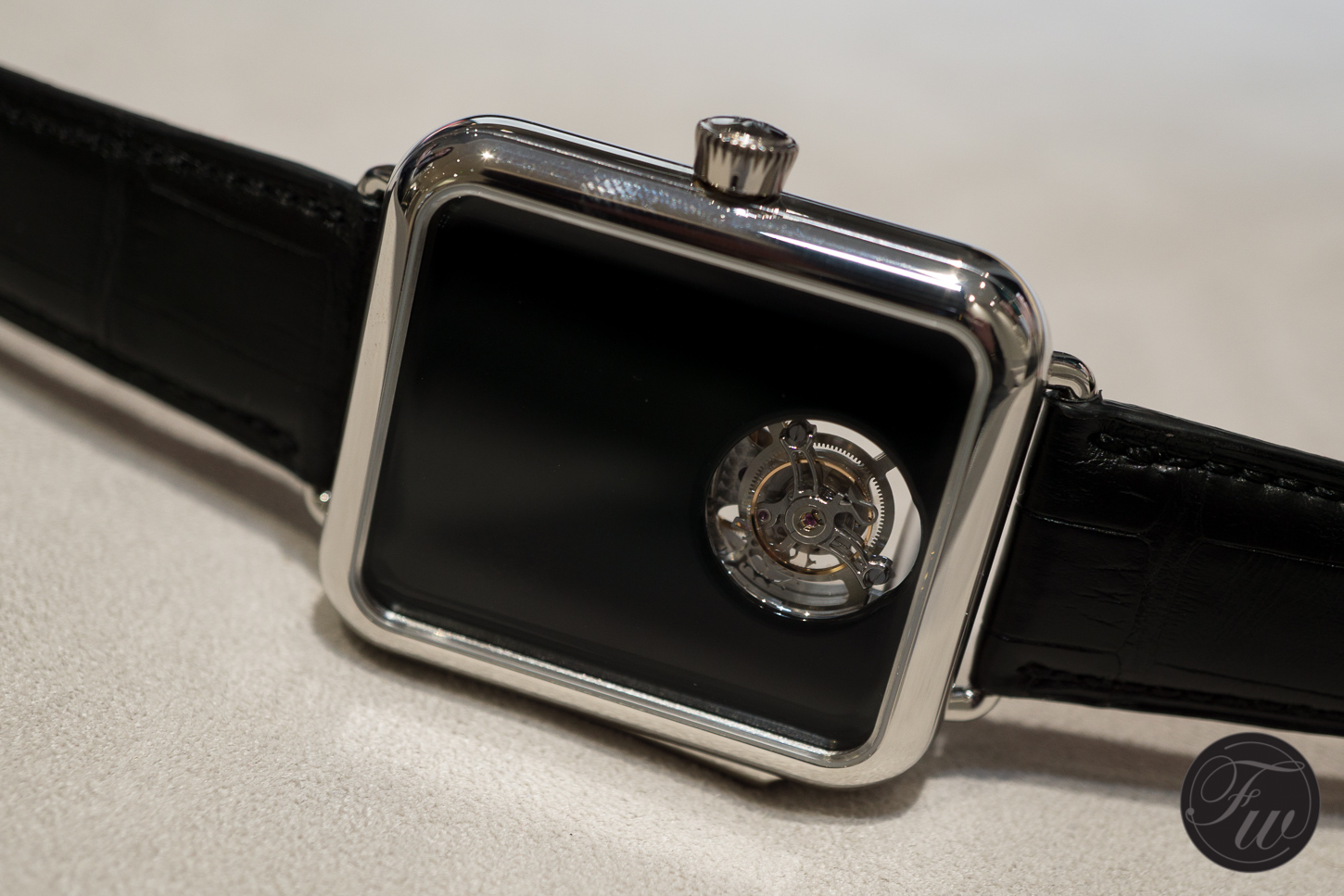 Moser is still coming out with brilliant concept timepiece and ideas, raising issues and leading the way. Just look at the Moser Nature Watch from SIHH 2019. Meanwhile, Apple Watch is at their 4th generation now, breaking record sales. What this little scuffle left with us, watch lovers, is the Swiss Alp Watch. A model that serves as the perfect base for new notions, such as the Swiss Alp Watch Concept Black. This is not the first or the only Swiss Alp Watch concept timepiece but it’s one of the most outstanding one to date. If you fancy the shape Moser offers regular Swiss Alp Watches as well like the Small Second. Sadly, the Concept Black was sold already during the fair (retail price was 330.000 CHF) but we were told that perhaps something similar is in the pipeline for the brand. Maybe in a different color? Who knows? 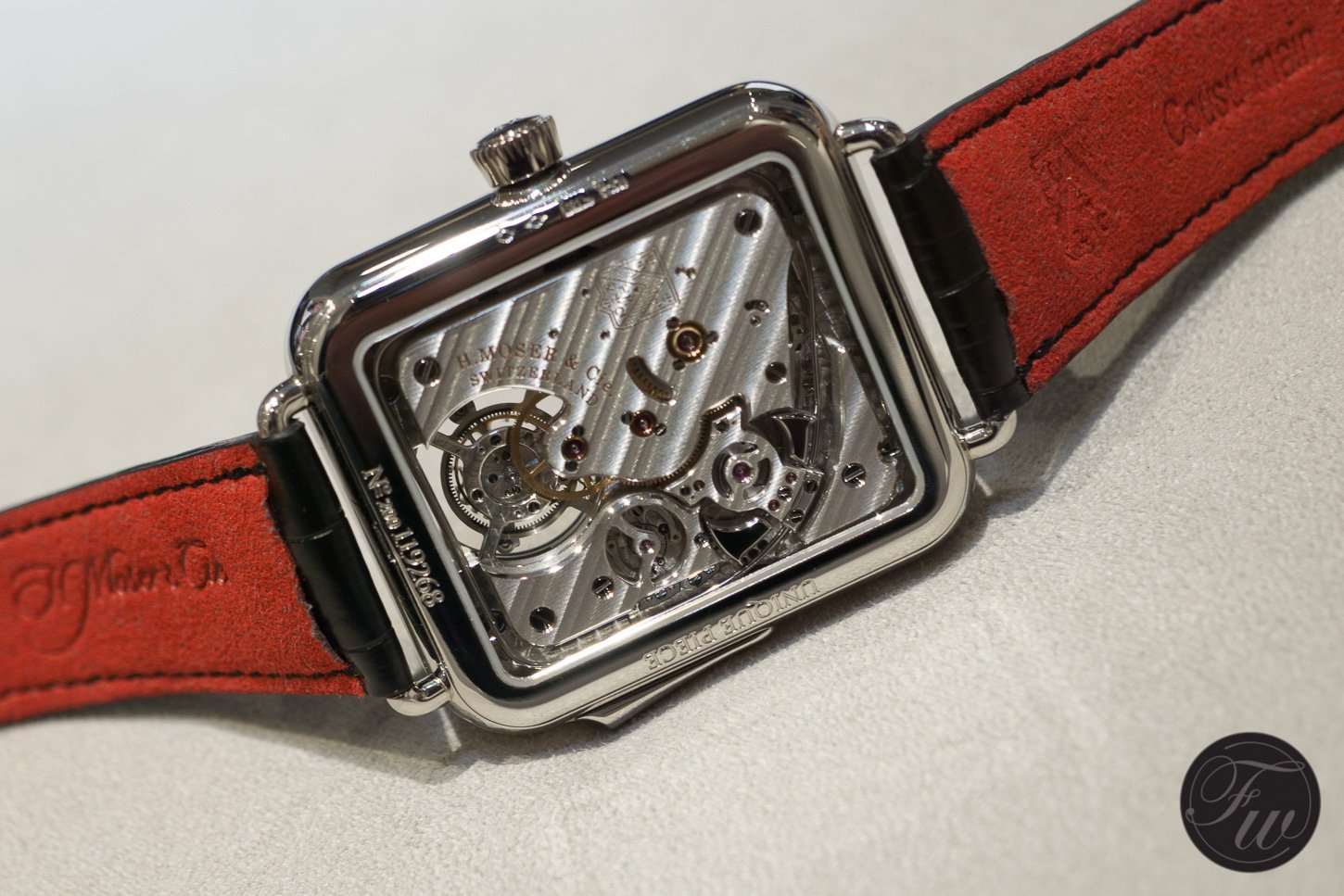 The square (dare I say, Apple Watch-like) platinum case is 48.8 x 39.8mm with only 11mm thickness. It has a glossy black dial with an aperture for the one-minute flying tourbillon at the 6 o’clock position. As with most Moser concept watches the Swiss Alp Watch Concept Black has no indexes or the Moser logo on the dial. As a matter of fact, it doesn’t even have hands. The watch does not show the time. It chimes it. While visually the most prominent feature of the Concept Black is the tourbillon, that cannot indicate the time. The minute repeater can. Moser wants to take us back to the times when watches – let that be wrist or pocket – were scarce. People had to rely on their ears and a tower clock to have an idea of time. The watch basically works as those clocks and chimes to indicate a period. 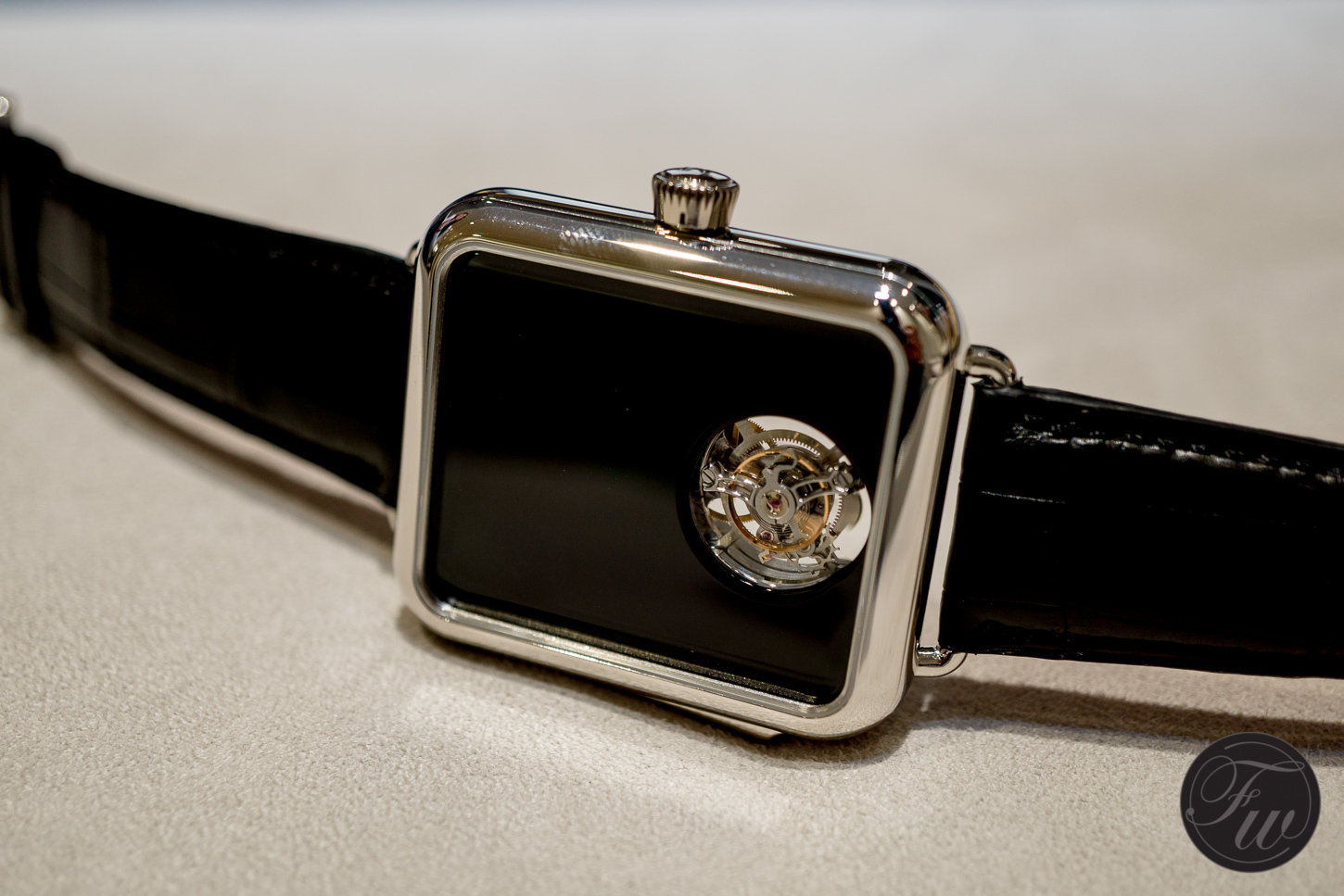 However, every watch needs a way to set it. When it comes to the H. Moser & Cie Swiss Alp Watch Concept Black you can do it with the crown. There are small marks on the crown tube where you can set the time within 5 minutes of accuracy. The marks are only visible if you pull the crown out. Another problem that the watchmakers and designers at Moser had to face with the shape of the case. Most minute repeaters are round, which makes it easier to develop the function in the movement. Here, due to the angles of the rectangular case, this was quite the challenge. Not only the case is rectangular but the movement itself too. In the end, they developed a caliber that had a tourbillon and a minute repeater in a square case with 2 rectangular shaped gongs for the chiming. 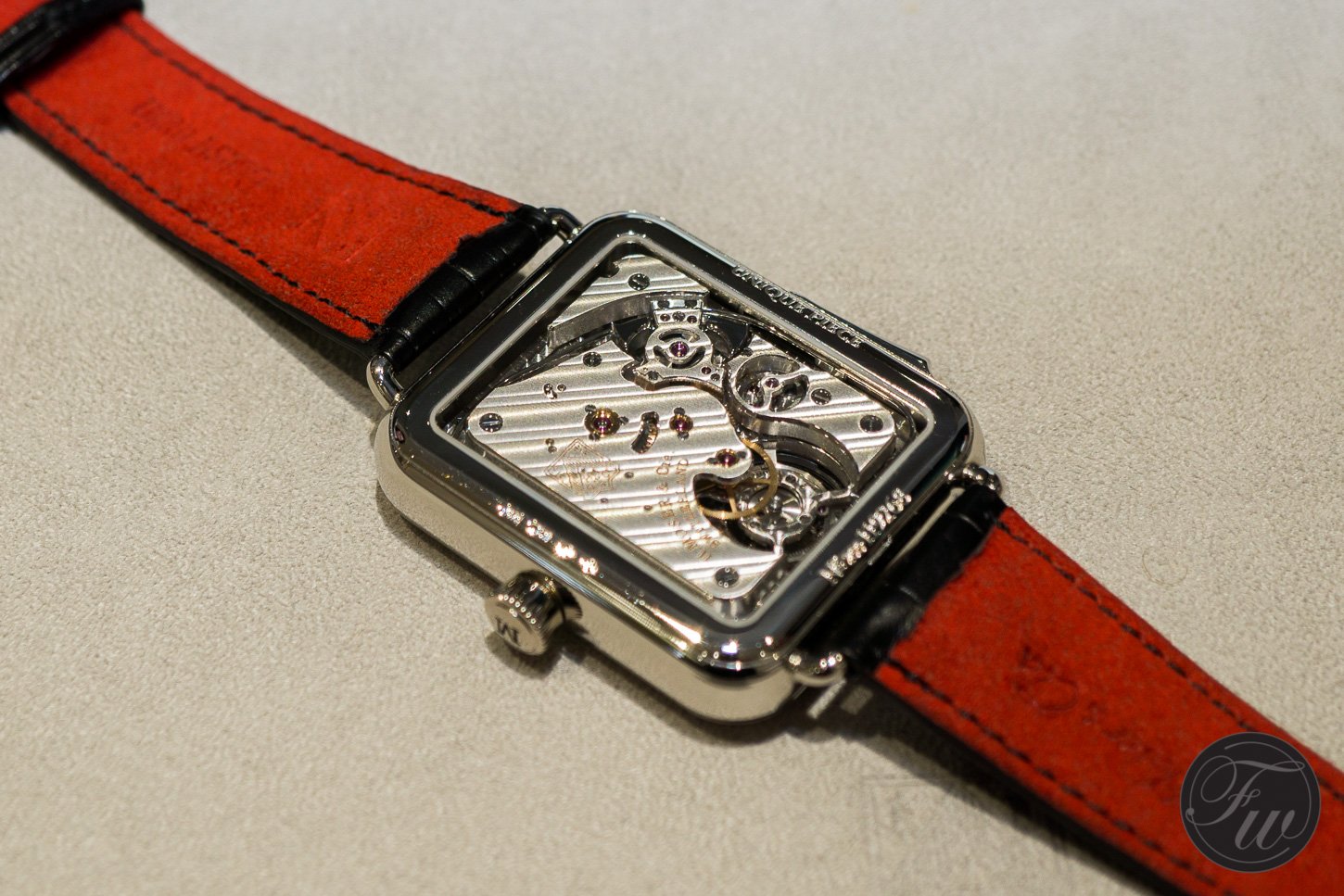 The manual wind HMC-901 caliber is Moser’s 13th in-house movement since the first one in 2005. They developed it with the help of minute repeater specialist MHC Manufactures Hautes Complications SA. The HMC-901 has 87 hours of power reserve with a frequency of 21,600 Vph. The 28-jewel caliber has a flat hairspring and a one-minute flying tourbillon with skeletonized bridges. The whole movement has Double Moser Stripes decoration on the bridges and plate. Needless to say, everything is hand finished and decorated. The minute repeater has a quarter, hour and minute chimes. It is, just like the rest of the timepiece. A work of art. Not sure what H. Moser & Cie is cooking for SIHH 2020 but we’ll definitely be there to report about it. 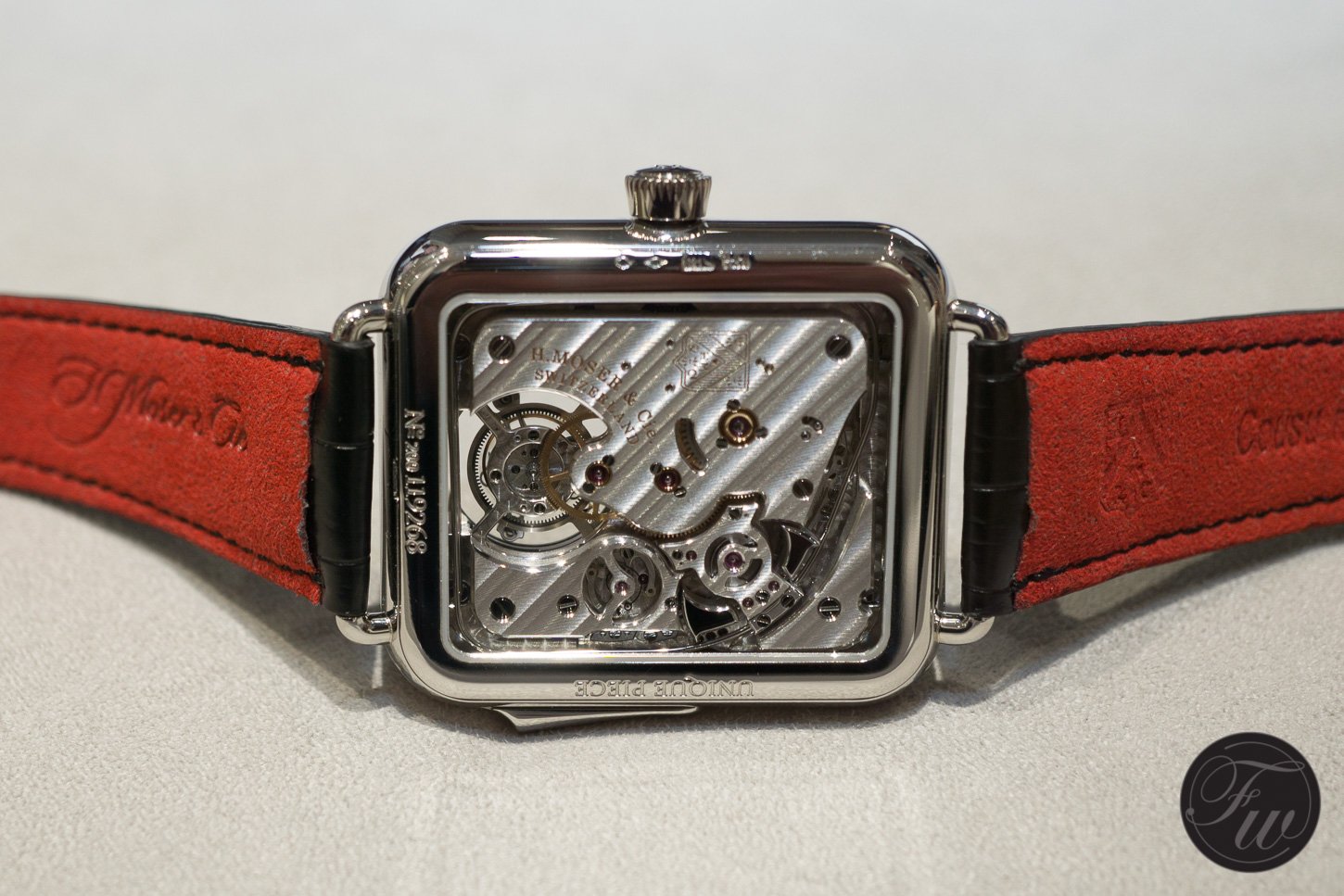