Hamilton: 100 Years of Timing the Skies

In 2018, Hamilton will celebrate an important milestone in our history as we mark our first century of timing the skies.

Hamilton has a prestigious history of serving the flying community and has been providing essential cockpit tools to pilots and co-pilots since the early days of flight. Watches are essential in aviation. Everything is based on accurate timing. Even modern pilots need a watch as a reliable backup to their digital multi-instrument display. 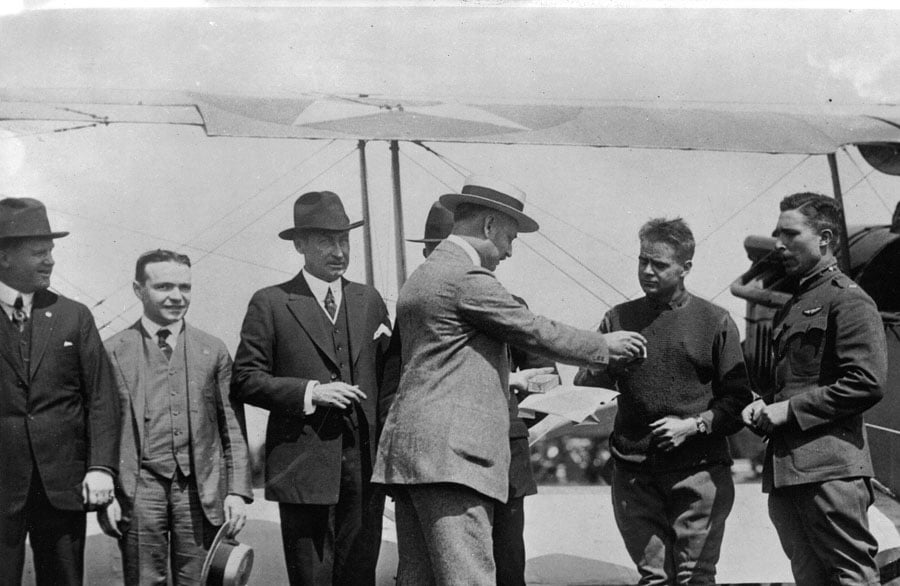 Frank C. Beckwith, Secretary of the Hamilton Watch Company and a member of the Board of Directors presents Hamilton watches to Army Pilots Torrey H. Webb, (left) and Lieut. Stephen Bonsail, (right), at Belmont Park Race Track, May 15, 1918 watched by the New York City postmaster (far left). Shortly after, the pilots flew the very first U.S. Airmail flight to Washington, D.C. with a stop in Philadelphia.

Hamilton’s close connection with aviation began early in our history. Having gained a reputation for accuracy with our railroad watches, Hamilton started creating pilots’ watches.

The milestones since then have been regular and significant. In 1918, Hamilton watches were chosen to be the official timekeepers of the first U.S. Airmail flights between Washington, D.C., Philadelphia and New York. 1926 saw a Hamilton watch time the first flight to the North Pole. 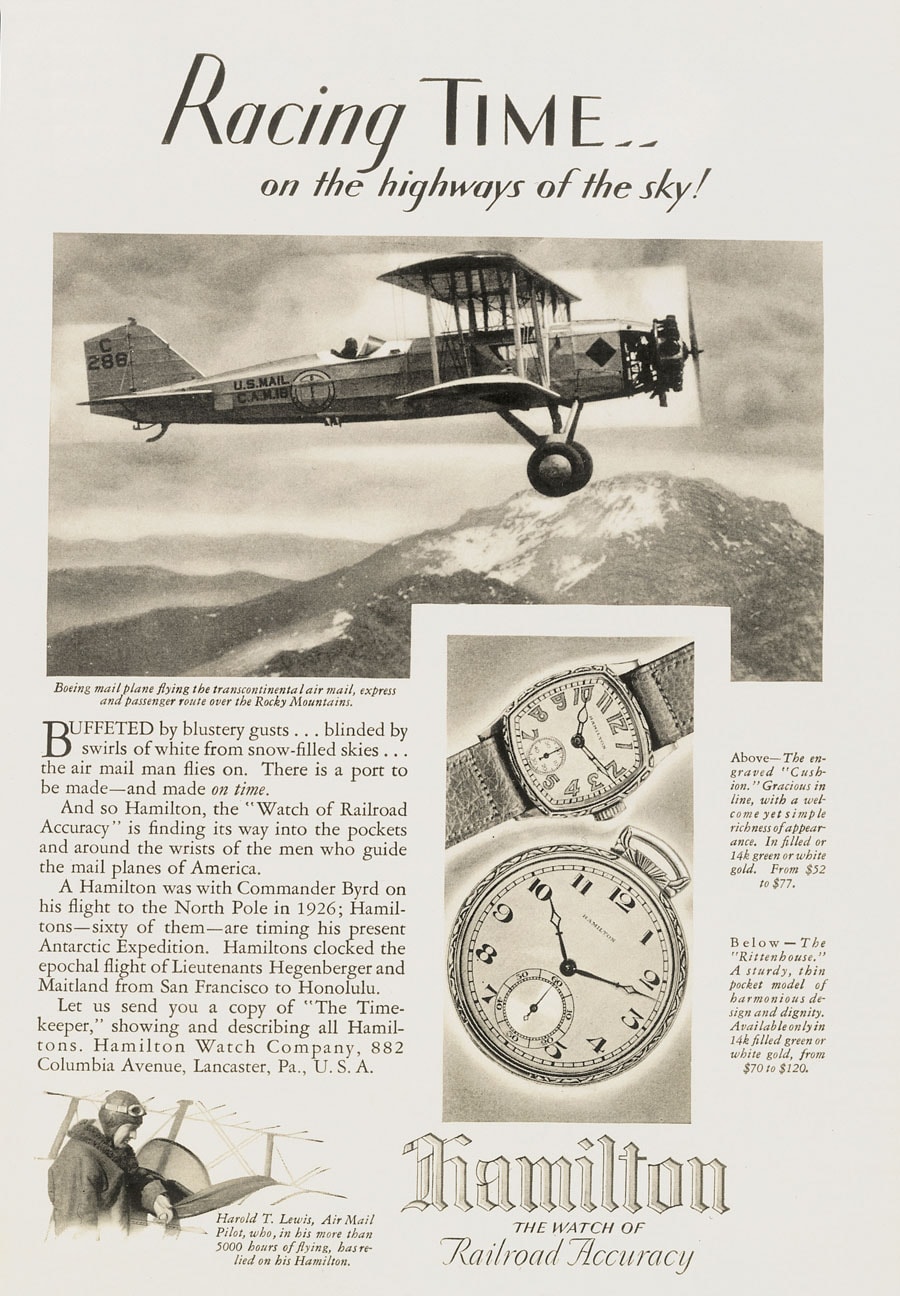 In the 1930s, our reputation for producing aviation watches saw Hamilton become the official watch of the four major airlines of the United States and our selection as the timekeeper for the first non-stop coast-to-coast service from New York to San Francisco.

Since then, Hamilton has developed and maintained partnerships with military squadrons, air rescue services, demonstration teams and aerobatic pilots around the world.

In 2017, Hamilton became the Official Timekeeper of the Red Bull Air Race, the new dimension of motorsport. The championship focuses on speed and precision and requires split-second timing. The pilots use the fastest, most agile and lightweight racing planes to navigate the low–level aerial tracks at high speed. With this partnership, Hamilton is at the forefront of the most exciting branch of aviation. 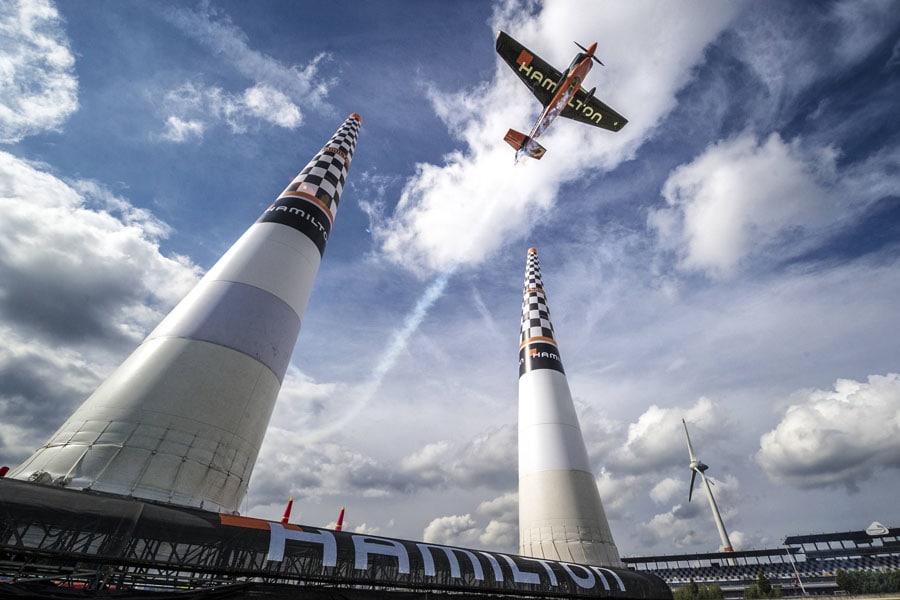 Nicolas Ivanoff of France performs during practice day at the seventh round of the Red Bull Air Race World Championship at Lausitzring, Germany on September 15, 2017. // Sebastian Marko/Red Bull Content Pool

As developments in aviation have increased, so has the demand for watches as flight instruments that can withstand the testing surroundings they are placed in, and meet pilots’ ever-evolving needs.

The current Hamilton collection reflects the needs of modern aviators, including watches with the ability to log up to 20 flights, with two time zones, and equipped with numerous calculators including those for landing speed, drift angle and fuel requirements. It is our continued close collaboration with pilots that has helped keep Hamilton at the cutting edge of aviation innovation in watches. 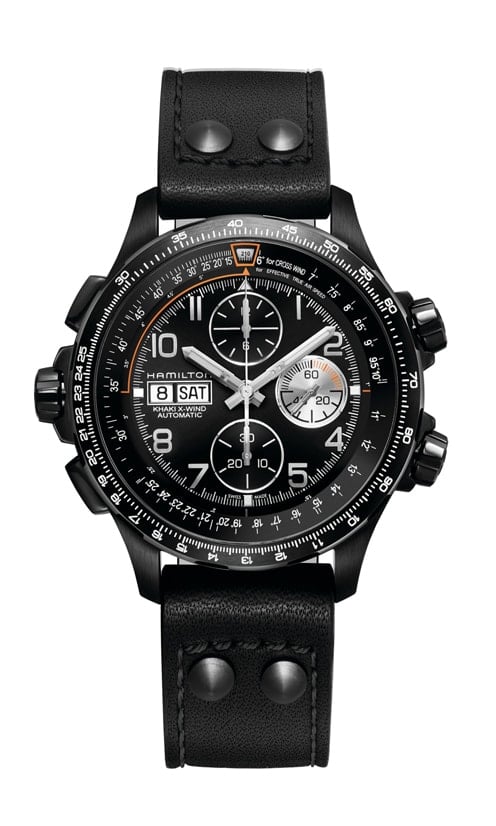 Since 1918, accuracy, innovation, a taste for adventure and a focus on precision have all contributed to making Hamilton the choice of professional aviators to accompany them in the cockpit.

Hamilton is proud to celebrate our first century of timing the skies.