Hamilton is no stranger to Hollywood super productions. The brand with American Spirit and Swiss Precision has been on the wrists of the silver screen stars for decades. 2020 brings us yet another collaboration by British film director Christopher Nolan and Hamilton. The movie is Tenet, and the watch is the Khaki Navy BeLOWZERO.

Many of us remember Agent Jay and Kay in the 1997 sci-fi comedy Men In Black (played by Will Smith and Tommy Lee Jones) sporting the quirky/futuristic-looking Hamilton Ventura watches. Who can blame them? Even Elvis loved the Ventura, after all. Or how can we forget the most popular Hamilton of recent years, the Murph? This very model took its name from one of the main characters of a previous Nolan super-production — Interstellar (2014). Murph, one of the protagonists, was wearing a custom made Hamilton timepiece that later made it into the real catalog.

On the 31st of July 2020, Christopher Nolan’s new sci-fi thriller Tenet comes to theaters. It stars John David Washington (BlacKkKlansman, The Old Man And The Gun) and Robert Pattinson (Twilight movies, The Lighthouse) as well as an exceptional watch. The model in question is a timepiece we are all familiar with. I’m talking about the Hamilton Khaki Navy BeLOWZERO. More on the watch a bit later, but first…

Nolan wrote and directed Tenet, which according to various movie websites, is going to be an awesome flick. According to IMDb, “Armed with only one word — Tenet — and fighting for the survival of the entire world, the Protagonist journeys through a twilight world of international espionage on a mission that will unfold into something beyond real-time.” If you love Nolan’s filmmaking, you will surely enjoy Tenet. Just make sure you pay attention to the watch too.

The BeLOWZERO has been in Hamilton’s collection for a while now. So, the timepieces Nolan’s crew uses in Tenet are not entirely new. Instead, they are special editions based on the model from the movies. And the best of it all? Hamilton releases these special editions to the public as well. The technical development team at the brand went through an 18-month preparation period. This included developing, testing, and producing numerous prototypes. Swatch Group’s lab in Switzerland served as the perfect resource for that. The final result is undoubtedly worth the wait. However, until then, we have these two unique pieces for our viewing pleasure. So let’s take a closer look at the BeLOWZERO. 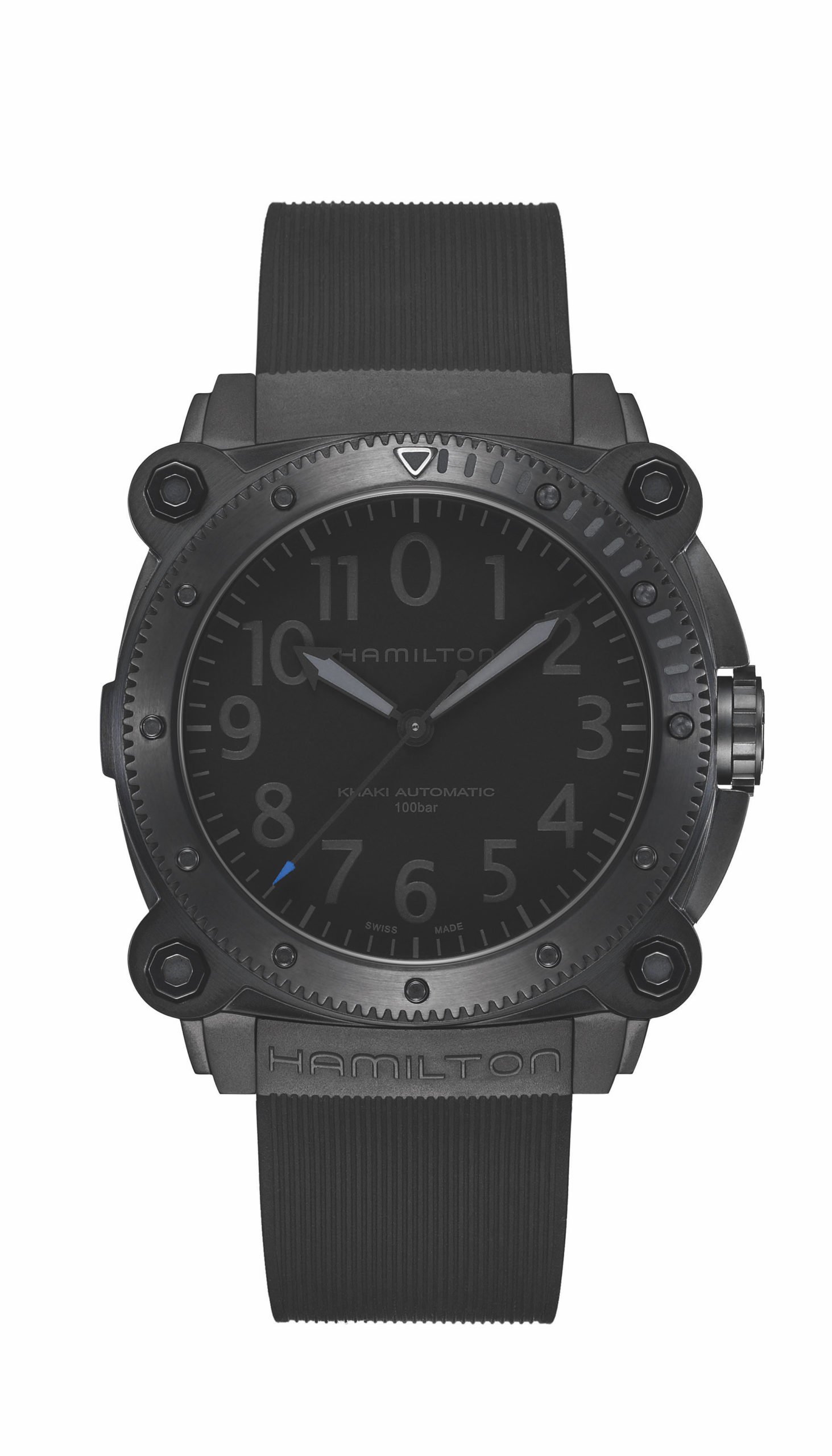 The watch comes in a lightweight titanium case. Contrary to the regular one, which has a stainless-steel case. We are talking about a pretty large timepiece here at 46mm. Although this is not that disturbing since the PVD coating on the case makes the BeLOWZERO look smaller. As we are talking about a diver, the water resistance is an astonishing 1000m. Inside this watch, beats caliber H-10. This is a mechanical, self-winding movement with 80 hours of power reserve. Not too bad for a diver! However, these exclusive BeLOWZERO watches have a small but essential detail that sets them apart. Take a closer look at the seconds hands. Blue and red are two colors that have a vital role in the movie. For this reason, the tip of the hands is painted either bright red or blue. The large numerals have dark grey Super-LumiNova coating, providing an edgy contrast with the vibrant tips of the seconds hands. 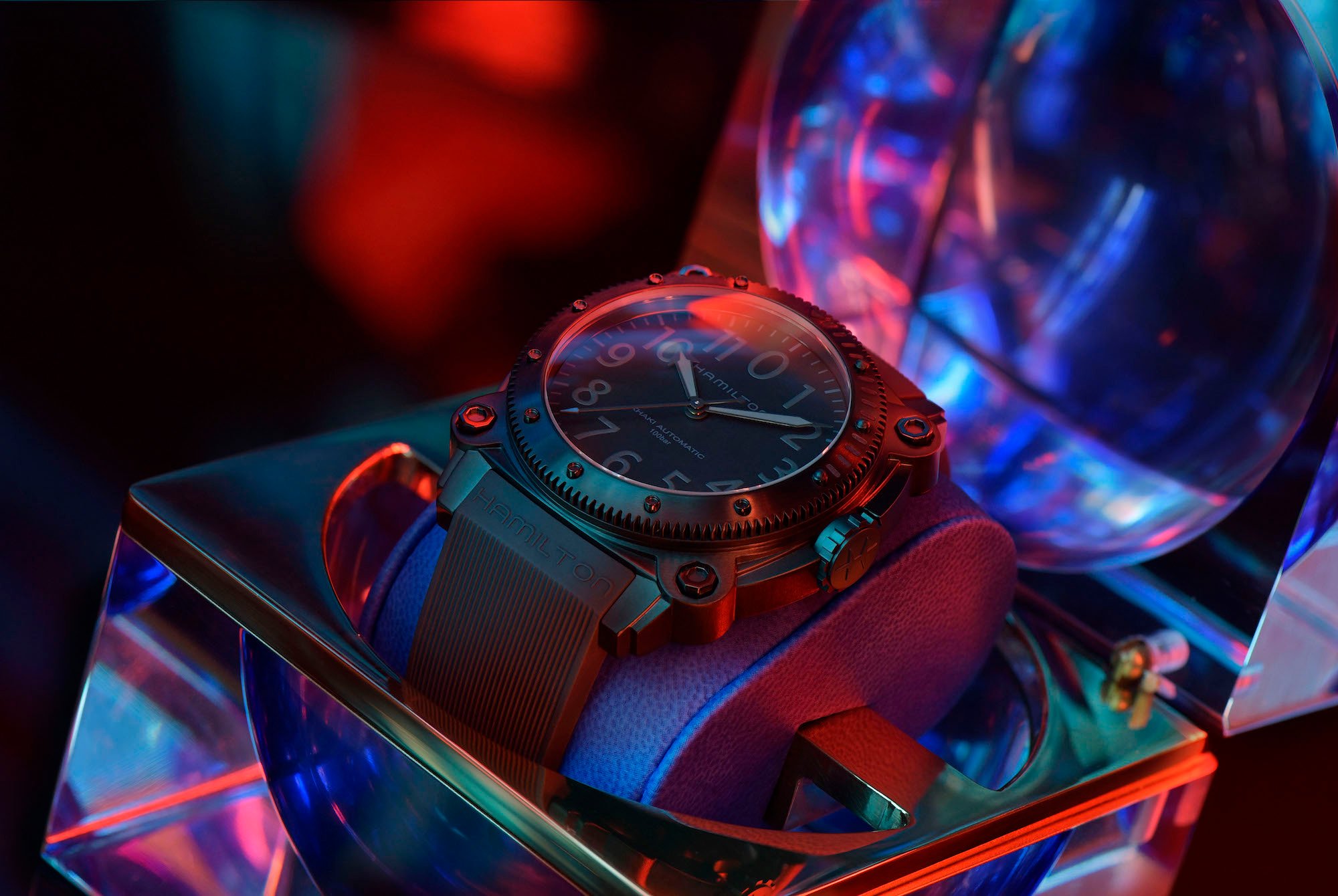 Make sure you check out Tenet when it hits cinemas later this year. In the meantime, watch Interstellar for some Noalan X Hamilton collaborations. And don’t forget to check out the new Hamilton Khaki Navy BeLOWZERO Tenet at your local AD.

Hot Topics
Introducing: The New Seamaster Professional 300M 60 Years Of Bond — With A Special Animated Case Back
105 comments
Are You Still After An Omega × Swatch MoonSwatch?
96 comments
It’s Time To Invest In A Dress Watch — Our Picks From Breguet, Omega, Grand Seiko, And More
73 comments
The Rolex Waitlist Conundrum — How Much Will The Price Of Your Watch Increase While You Wait?
50 comments
The Best Omega Speedmaster Watches Of 2022
40 comments
Popular
An Overview Of All Omega Speedmaster Apollo XI Models
Robert-Jan Broer
17
Certina DS PH200M – Hands-On Review
Balazs Ferenczi
23
Rolex Submariner Hulk versus Seiko SLA019 : Shades of Green
Michael Stockton
27