As a watch reviewer, it is quite common to find yourself experiencing Deja Vu. We cover thousands of watches throughout our careers. Most of these write-ups will be standalone pieces, focused on new releases or classic throwbacks that deserve attention. But every so often, you run into a watch that just won’t leave you alone. Luckily, for me at least, the Hamilton Field Khaki Murph is one of those pieces I’ve had the opportunity to cover on several occasions.

The watch first appeared in Christopher Nolan’s 2014 sci-fi epic as a central character. Gifted by Coop to his daughter Murph, this particular Field Khaki was used by a future version of Coop to communicate with his daughter. Thankfully, the morse code seconds hand is one element that has completely changed from the prop to the production model. In the movie, the undecorated seconds hand did not perform its regular function. Using Morse code, Coop hijacked the seconds hand to send a crucial message to his daughter. She used that information to effectively save the world. As far as watch roles go, it’s hard to top… 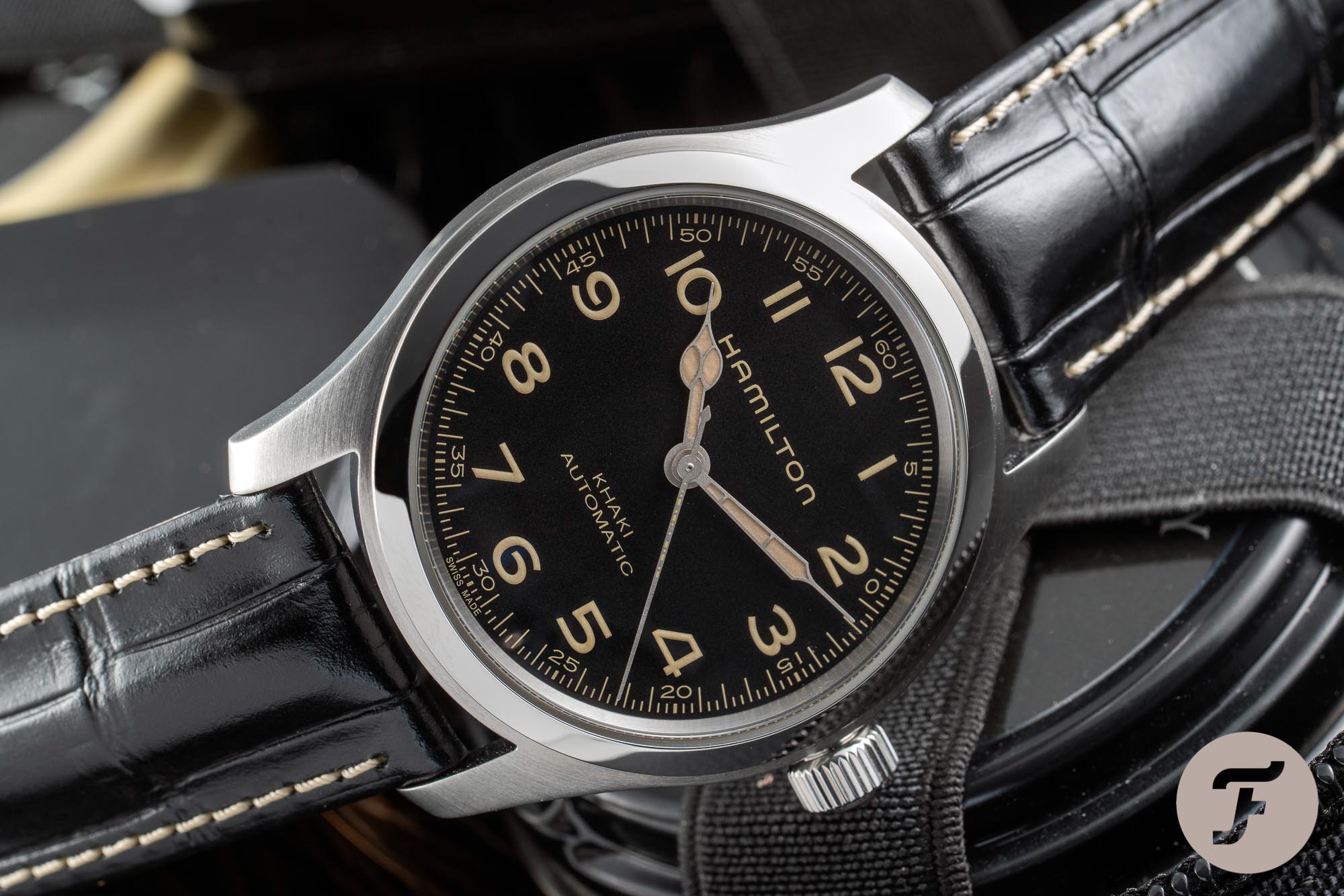 On the production model, the seconds hand is more decorative than communicative. Yes, it performs the regular function of a seconds hand but is printed with a small message in Morse code, which didn’t feature on the film version. The message (which is barely visible on the wrist) says, “Eureka.” It’s a nice touch, for lovers of the movie that remember the scene in which Murph yells it to nobody in particular. 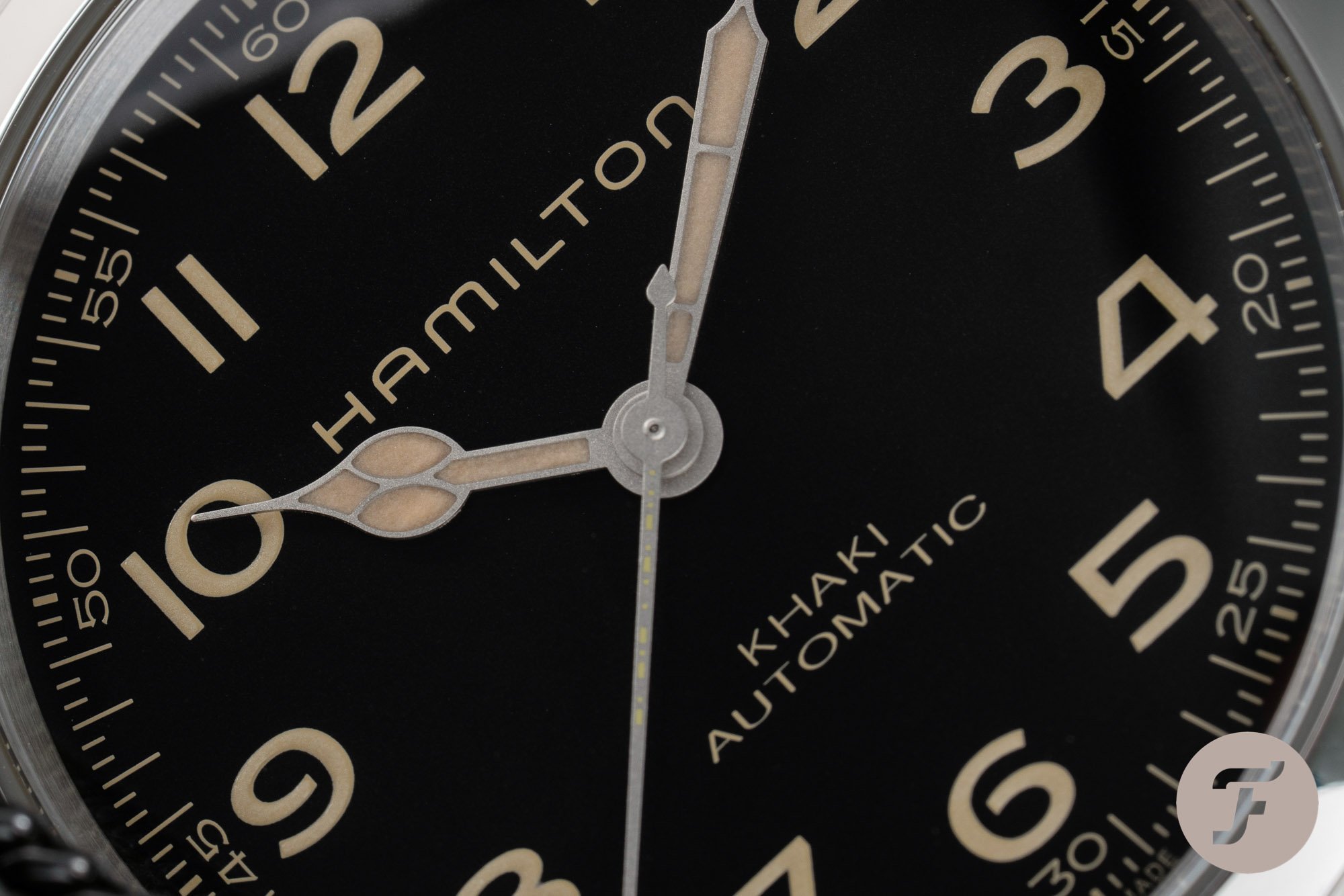 Hamilton really nailed the execution of this easter egg. It could have gone badly wrong had it been too visually disruptive. As it is, it is there, hidden in plain sight. Next to the bulkier Cathedral hands, the going seconds hand is not going to disrupt the watch’s legibility at all. 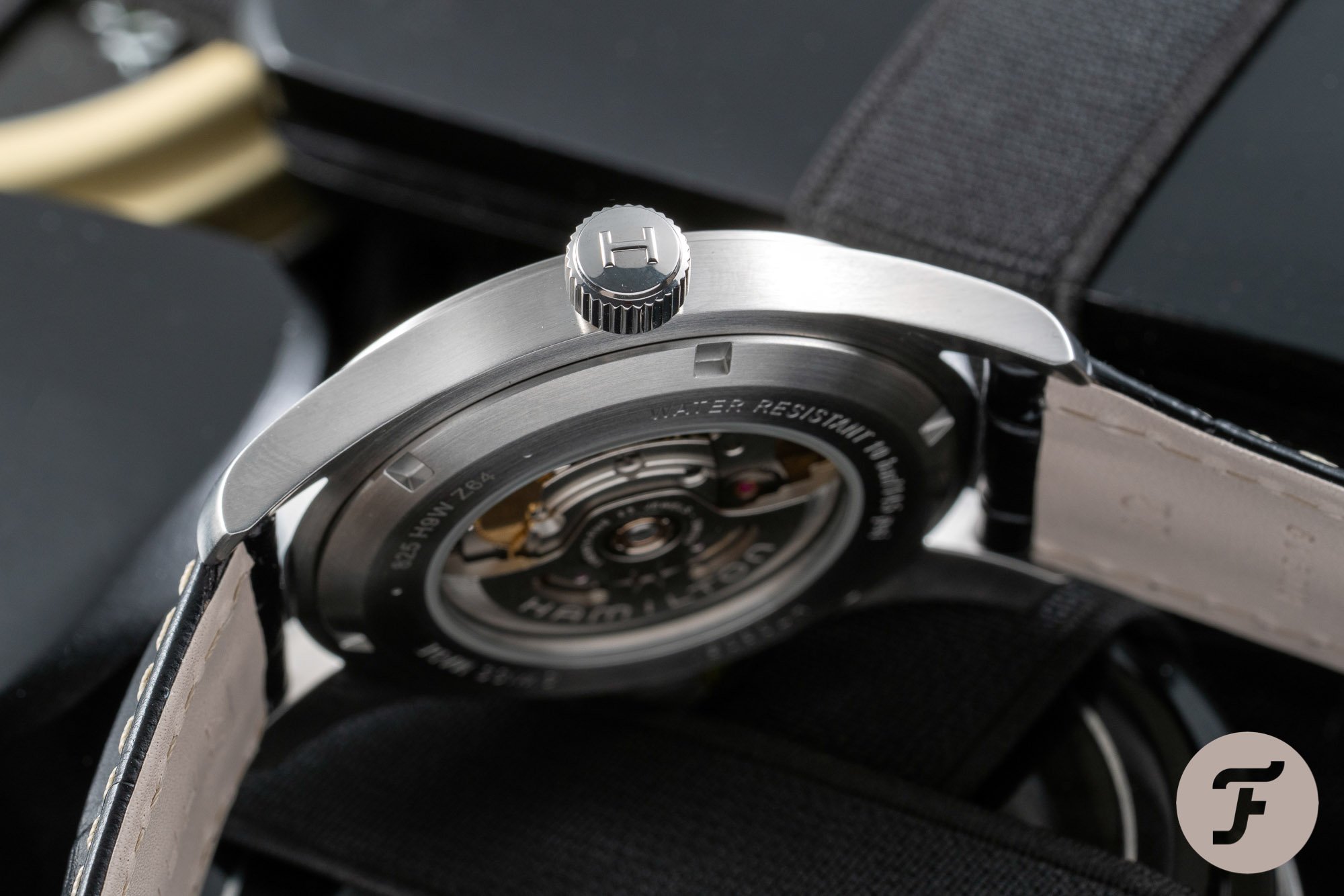 The most important thing

In my opinion, this is a fine-looking watch. I love a bit of creamy lume and think the crisp layout makes the most of an aged colorway. The dial printing is crisp and uncluttered. From the pictures, you might find this hard to believe given the 1/3 seconds track around the outer edge of the dial that takes advantage of the H-10’s 21,600vph (3Hz/6 ticks per second) operating frequency. The H-10 has a mighty power reserve of 80 hours, which is a massive upgrade from the ETA 2824 upon which the rebranded ETA C07 is based. But the most important thing to know is that the size of this beauty allows for plenty of space for these elements to breathe. 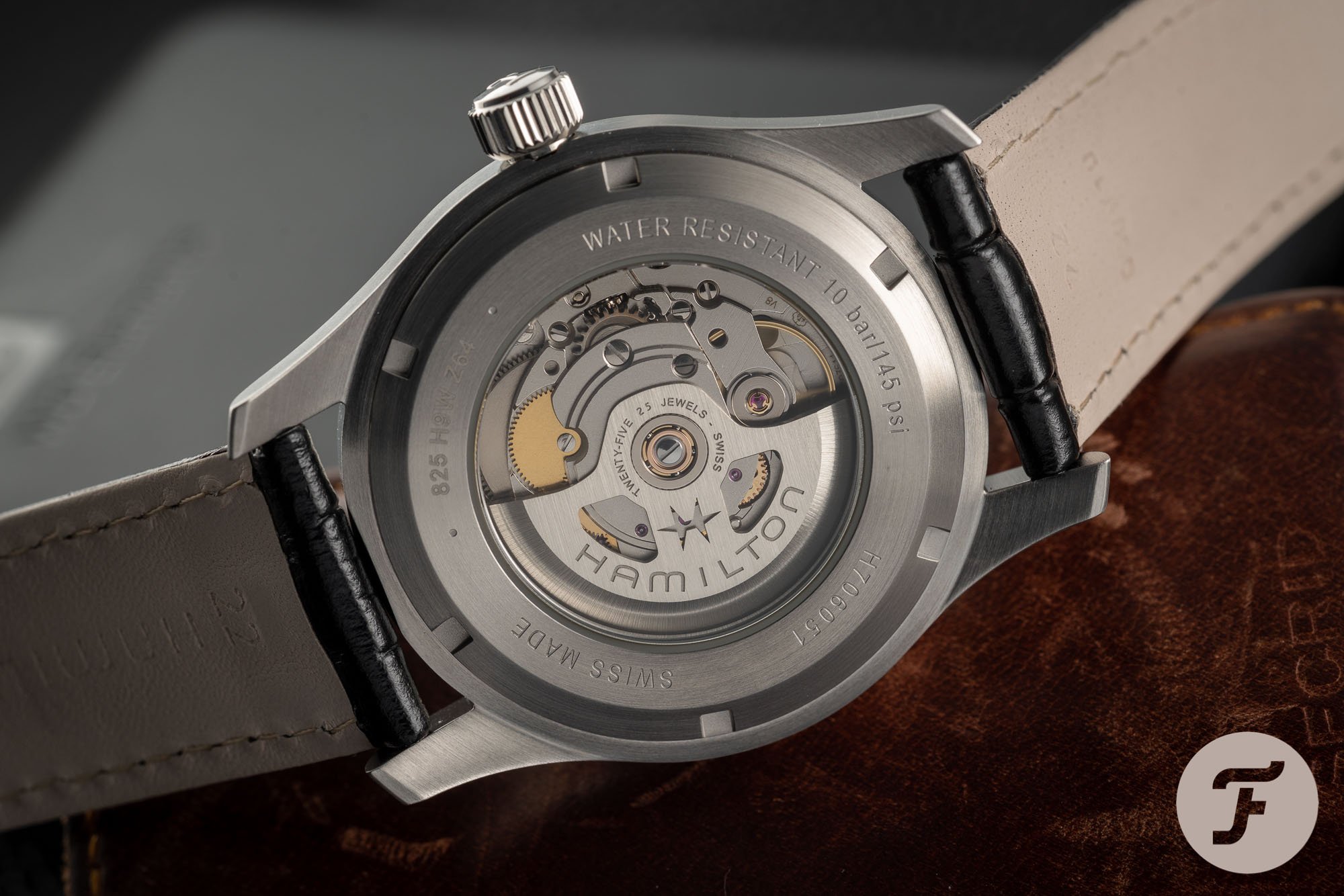 At 42mm with a 52mm lug-to-lug length the Hamilton Field Khaki Murph wears massively. It has a huge amount of wrist presence that shocked me the first time I got it out of the box. I think this watch design could have worked anywhere between 38 and 42mm, but this size is surely the most commercial of the options. Additionally, had the brand opted for a smaller diameter, that beautifully-detailed dial might have seemed cramped and claustrophobic. Thankfully, as it is, it offers a heritage aesthetic while retaining a clean and modern character. 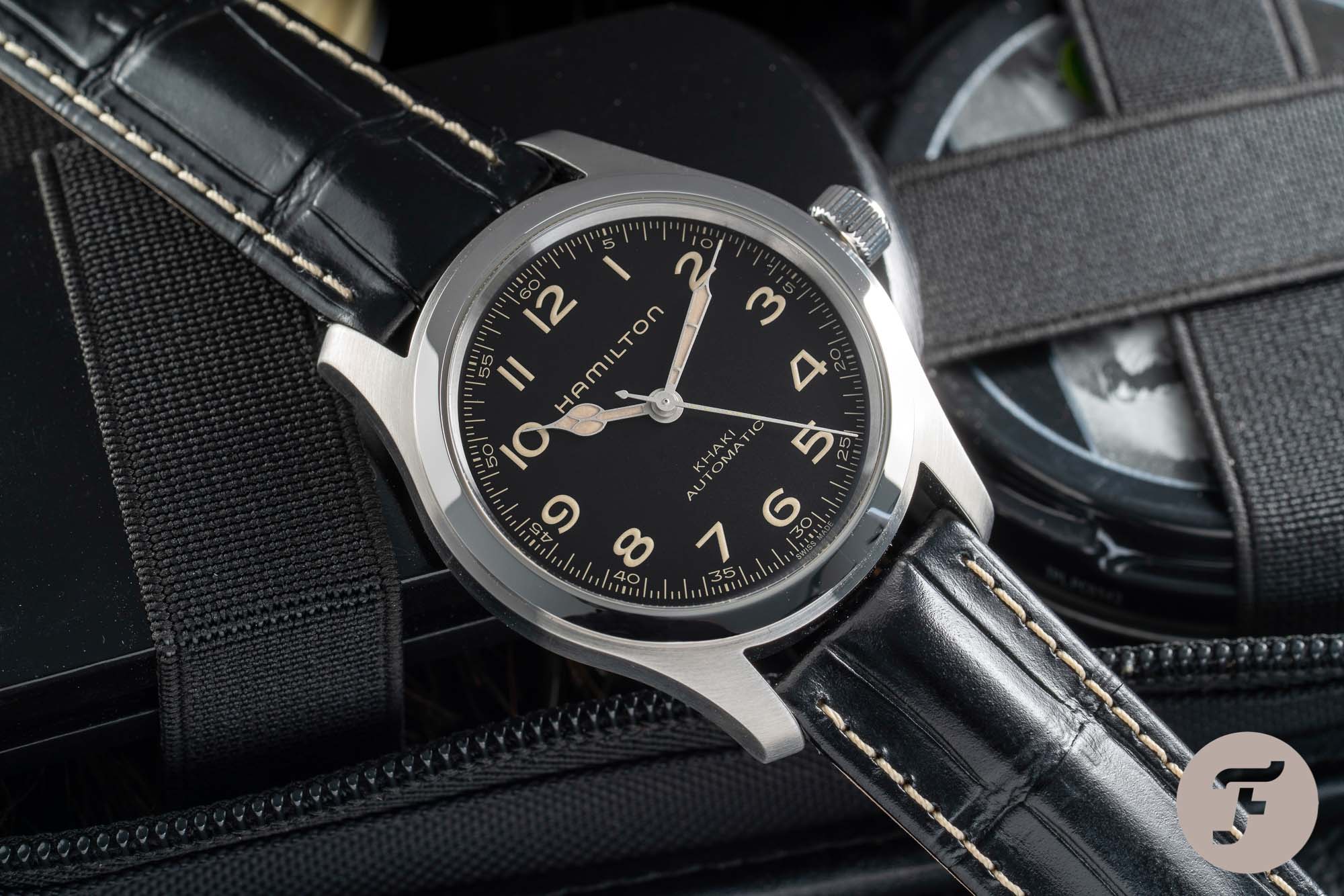 Why we chose it for our shop

We don’t stock too many watches on the Fratello shop at the moment. Building our catalog from the ground up is an exercise we take very seriously. It is important to everyone on the team to only select models we feel personally passionate about. The “Murph” is definitely one of those pieces — check it out in the shop here. As a huge fan of the movie, I remember the thrill I got when I heard that this model was actually being brought to life. 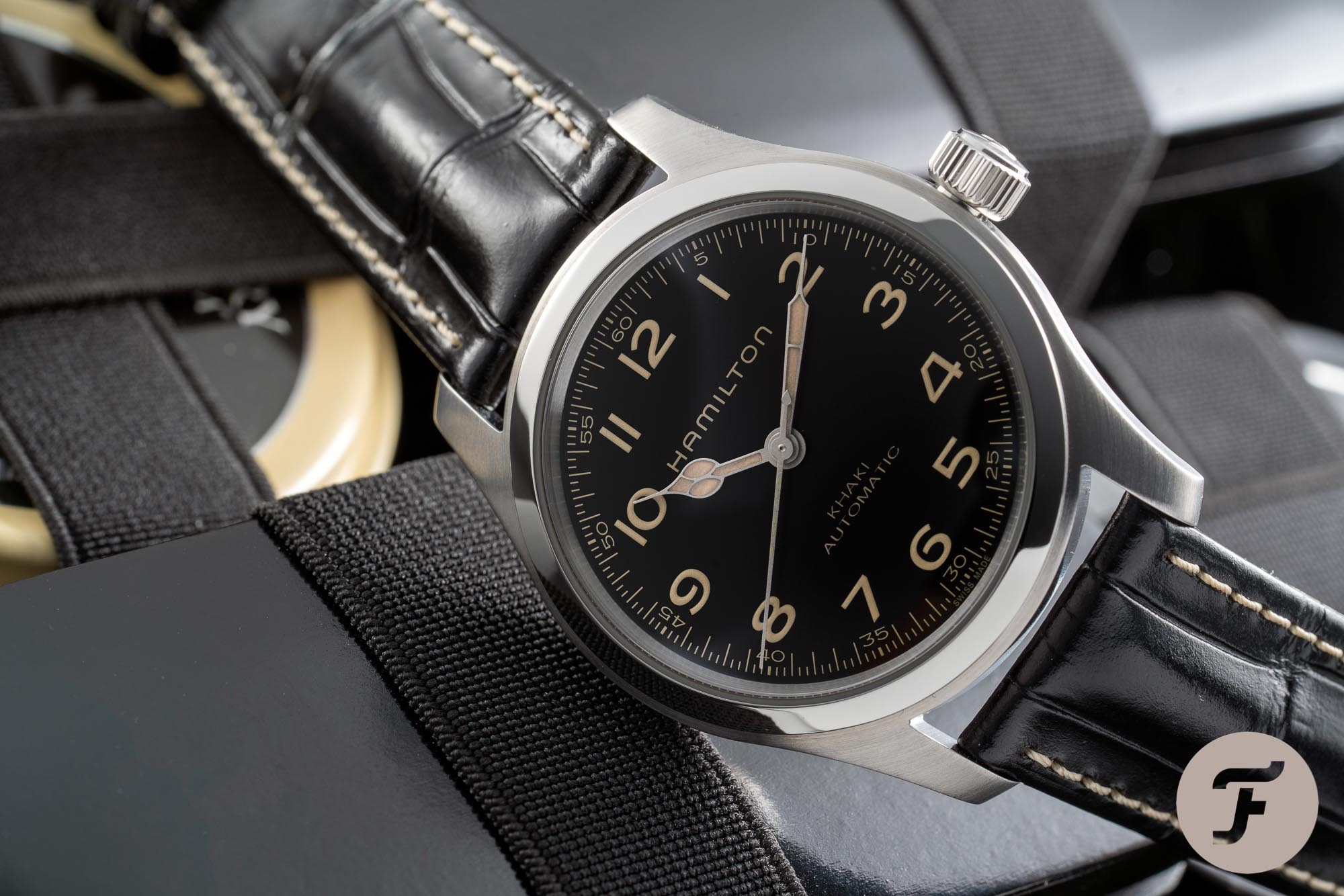 That thrill hasn’t diminished having had it on my wrist, and it is a real pleasure to make it just the second Hamilton we’ve chosen to add to the line-up. We hope you like it too. Let us know what you think about it and other ways we can improve the shop/user experience in the comments below.