Hamilton is releasing a new military-inspired piece, the Khaki Pilot Pioneer Mechanical, after the remarkable success of the Khaki Field Mechanical.

That watch took the industry by storm for its originality and price. The Khaki Field Mechanical looked almost exactly as its vintage counterpart and this was a huge chunk of the charm. The other favorable factor was the hand-wound movement inside and last not but least, the super affordable price tag. Today we have a look at the evolution of this model. Yet another re-edition, yet another military watch. But you don’t hear us complaining. The Hamilton Khaki Pilot Pioneer Mechanical is the modern reinterpretation of the legendary Hamilton W10. You’ll immediately recognize by the case shape that this watch comes from a different era than the Field Mechanical. That era is the 1970s when Hamilton supplied timepieces to Great Britain’s armed forced. The new Hamilton Khaki Pilot Pioneer Mechanical pays tribute to those watches in a wonderful way. 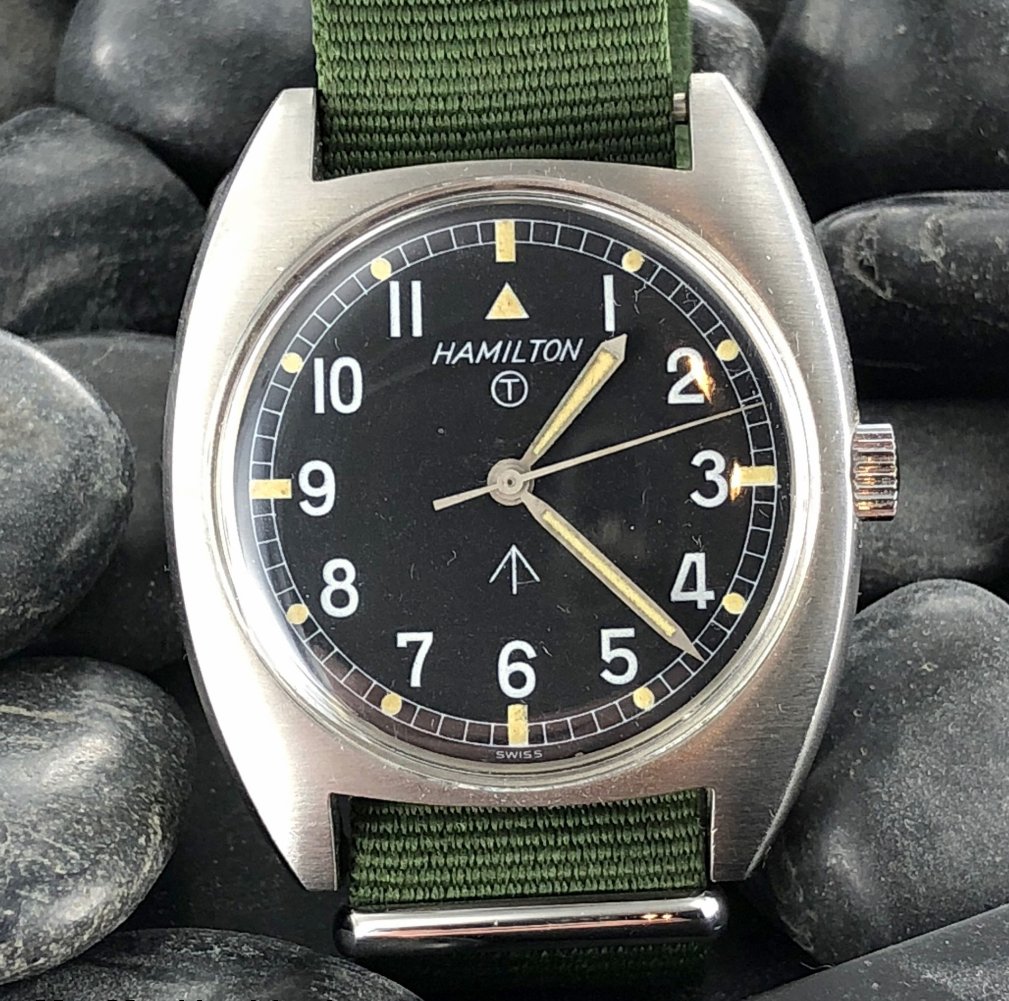 Fans of Military watches are (probably) familiar with the Hamilton W10. However, if this is the first time you hear about this model, let me bring you up to speed. Most of you know that Hamilton (having been an American brand) supplied the US Armed Forces with watches in the 1940s. Later, however, in the 1960s and 1970s, they also became the manufacturer of timepieces for the British Army. These pieces are very easy to recognize thanks to their “broad arrow” markings on their dials. Hamilton sent many models to Britain but undoubtedly the most popular watch was the W10. This went into production between 1973 and 1976. You can identify the production year of each vintage model by looking at the case back of the watch. The last 2 digits after the / would mark the year. Meaning, that Hamilton made the watch below in 1973. 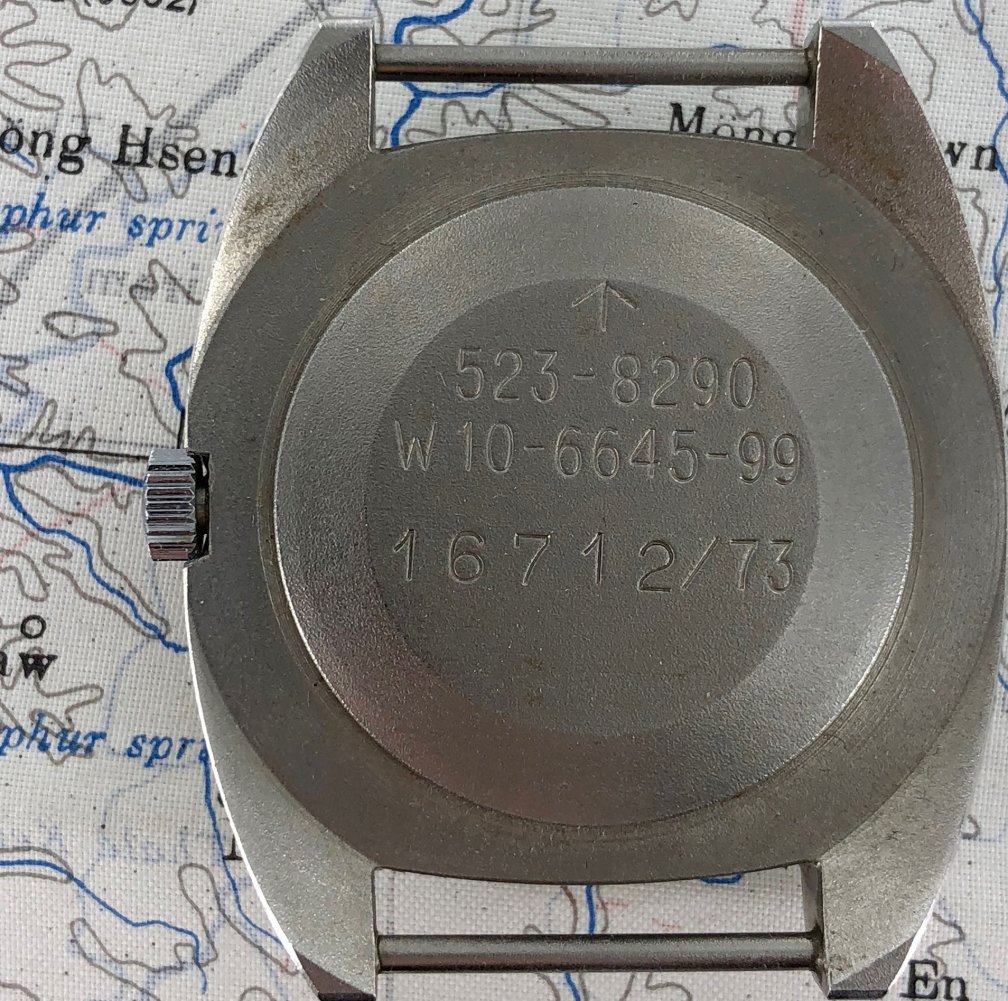 Caseback of the W10 with military marking photo credit: www.ukwatches.com

Turn the watch over and you won’t find any military markings anymore. Instead, you have the usual information like the brand name, the Swiss Made engraving, water resistance (10 bar) and the basic reference number (H764190). In reality, there is a difference between the 2 versions that Hamilton offers but they only differ in the type of straps they come on. H76419931 is the reference for the nylon NATO strap version and H76419531 is the number for the leather NATO version. The case back also has tonneau shape and as such cannot be screw-in. So, it has 4 screws to secure it to the case. A modern touch on the Hamilton Khaki Pilot Pioneer Mechanical is the crystal which is not plexi anymore but hardened mineral crystal with double antireflective coating. 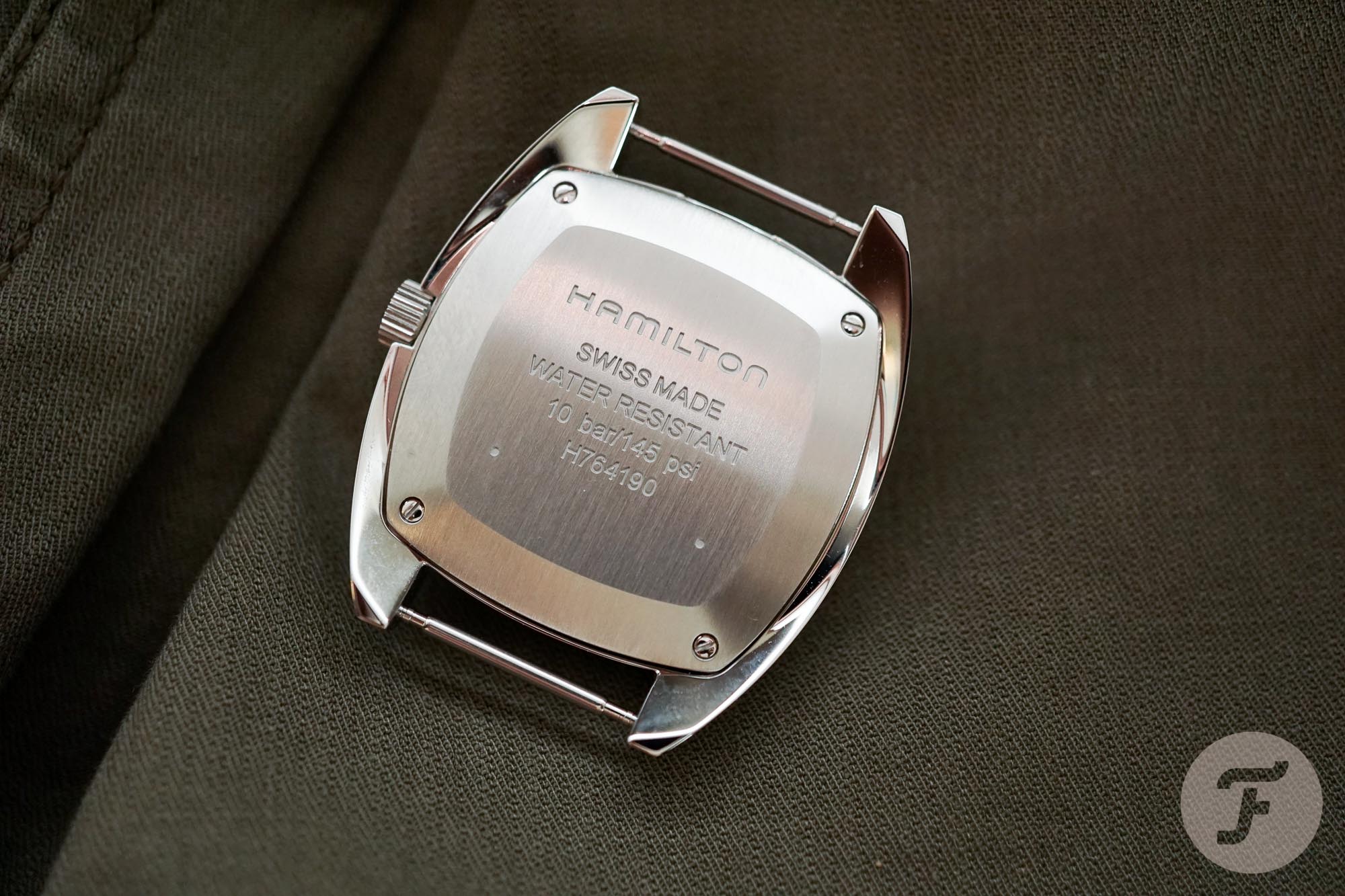 Hamilton uses the term “exact remake of the W10” in their press release but I’m sure that only applies to the case. The Hamilton Khaki Pilot Pioneer Mechanical’s dial is not like the W10’s. The main color is black of course without any broad arrow markings. However, the surface is very similar to the Longines Skin Diver’s black grain dial. So it’s not smooth as you’d have it on the W10. Miniscule detail but worth mentioning. I love its texture as well as the faux patina. Yes, the Hamilton Khaki Pilot Pioneer Mechanical has that, so if you are not a fan of fake patina please stop reading this article here. The numerals, as well as the minute scale and the brand name, are white. The indexes (rectangular for 3-6-9-12, round for every other hour) just like the triangle at 12 are beige and have Super-LumiNova. 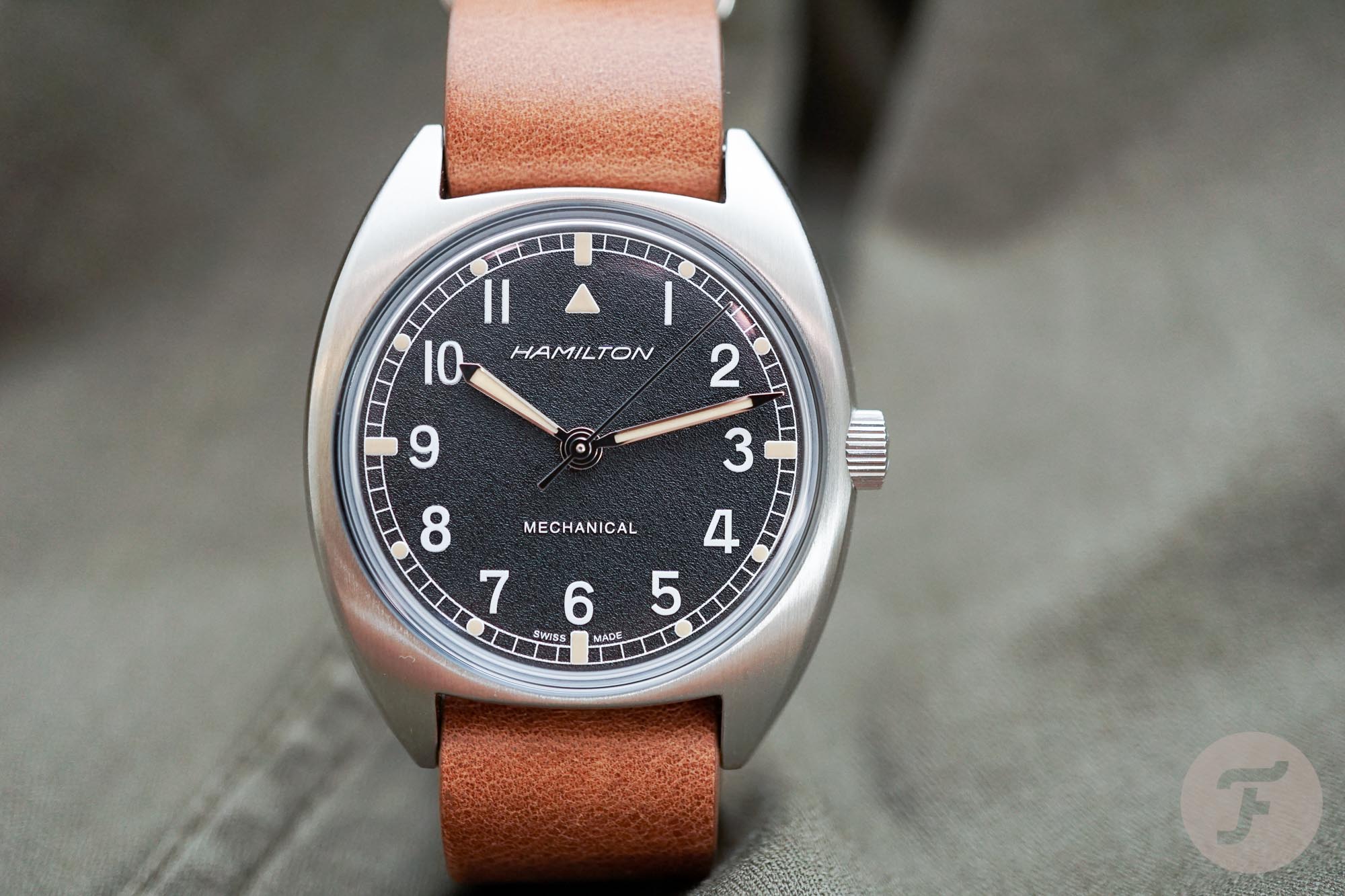 This makes the Hamilton Khaki Pilot Pioneer Mechanical super easy to read during day and nighttime. The military sword hands, just like you’d have it on the original W10, are made of nickel. They also have the same Super-LumiNova applied as the dial. The grain black dial adds a somewhat matte look to the face while the white and beige create great contrast on it. While it is a modern piece to the untrained eyes it looks just like a piece that came from the 1970s. Something you’d find at the bottom of an old box in a drawer at your parents’ or grandparents’ house.

As the last word in its name suggests the Hamilton Khaki Pilot Pioneer Mechanical is not a quartz watch and neither self-winding. It is a mechanical hand-wound watch that takes you a while to fully wound. It is so as the H-50 (the same caliber you can find in the Hamilton Khaki Field Mechanical) has 80 hours of power reserve. The H-50’s base is the ETA 2801-2, it has 17 jewels and a frequency of 21,600vph. A feature that does not have too much significance these days, but the W10 also had, and historical accuracy is important, a hacking mechanism. Meaning that if you pull the crown out the seconds-hand stops. This would allow the military staff to set their watches exactly to the second. The Hamilton Khaki Pilot Pioneer Mechanical has the same feature. 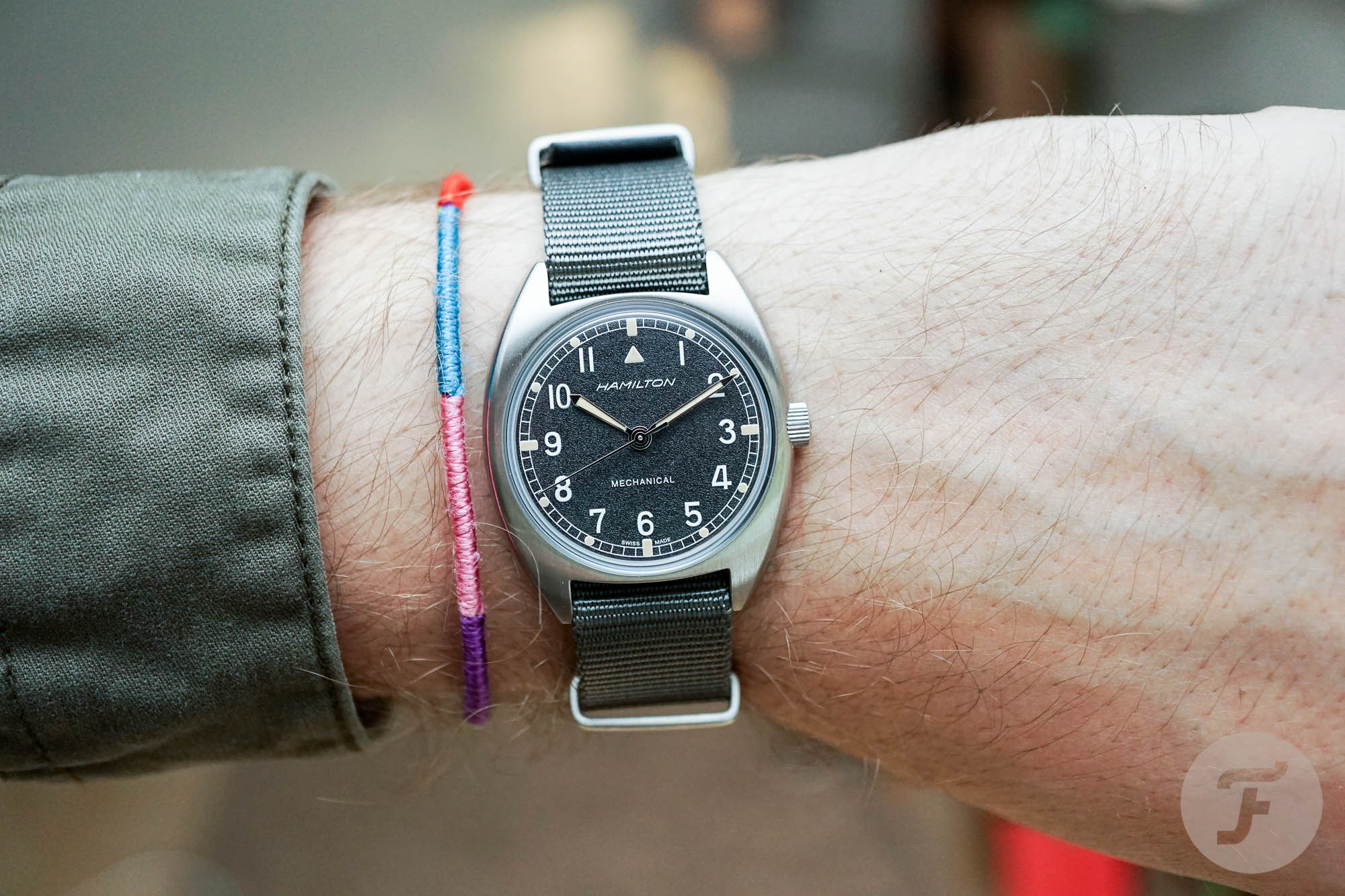 As I mentioned above the Hamilton Khaki Pilot Pioneer Mechanical comes either on a grey textile NATO with matching brushed keeper and buckle or on a brown leather NATO. That one also has the same keepers and color matching stitching. I know I tend to criticize Swatch Group brands for their strap choices, but these are truly comfortable. I had both watches for a good few weeks and I wore the nylon as well as the leather. I have to say they were as soft and comfortable as other high-quality straps would be. Nothing to complain about. They match the look of the watch and while the case might be a bit small for many the strap optically enlarges the watch. Since the case is not huge the lug with is also smaller at 18mm. 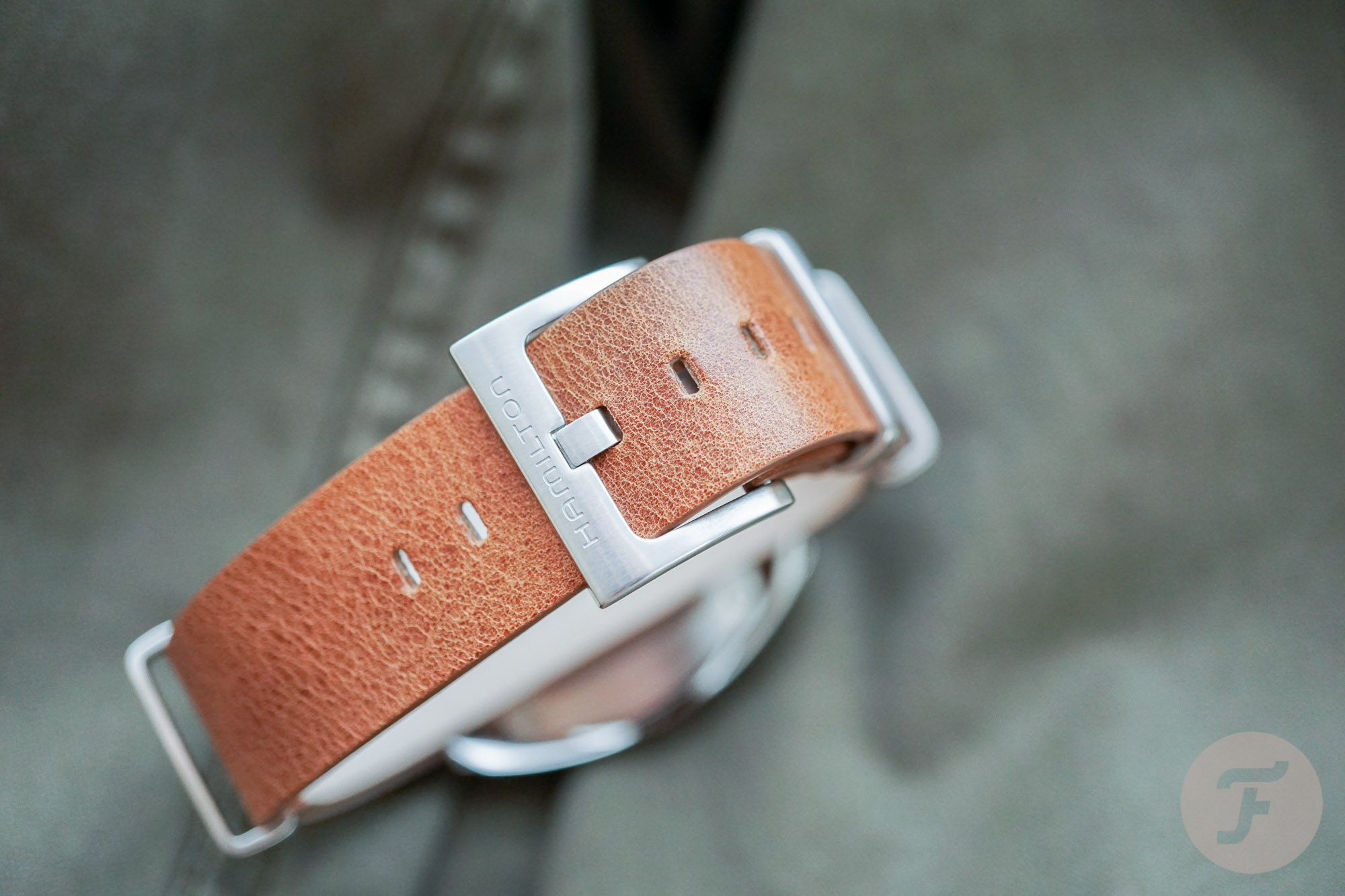 Availability and specifications can be found below.

For a limited time only, the watch can be ordered at our friends from Revolution. Click here to order.

Hot Topics
Introducing: The Omega Speedmaster Super Racing With Spirate System
162 comments
Design Vs. Specs — Which Is More Important To You When Buying A Watch?
86 comments
The Time To Buy Is Now: How The Current Economic Climate Influences Watch Buying And How You Should React
51 comments
My Predictions For New Omega Speedmasters In 2023
48 comments
A Regret-Free Guide To Buying Your First Luxury Watch — Part Three: Higher-End Options From Omega, Rolex, Grand Seiko, And More
48 comments
Popular
A Question From A Reader: “Which Modern Speedmaster Is Closest To The Original Moonwatch?”
Robert-Jan Broer
14
Top 10 Rolex Watches – Overview of Models Favoured By Our Readers
Fratello
25
Rolex GMT-Master History And Overview Of All Major References
Robert-Jan Broer
21