Hamilton is a sponsoring partner of Syroco. This French startup is dedicated to maritime innovation, especially with the intention of reducing carbon emissions. Syroco’s team is currently buckling down to break the sailing-speed world record in an effort to show what is possible. Well, I when say “break,” I really mean shatter. The current record is set at 121 km/h. Syroco, however, aims to reach 150 km/h. The vessel that is meant to accomplish this will carry the Hamilton logo on its flank. Now the Swiss watch brand introduces a special edition to mark the occasion.

The resulting Khaki Navy Scuba Auto (ref. H82385340) is a water-sports watch that reflects the Syroco branding. Let’s have a look at what Hamilton came up with. 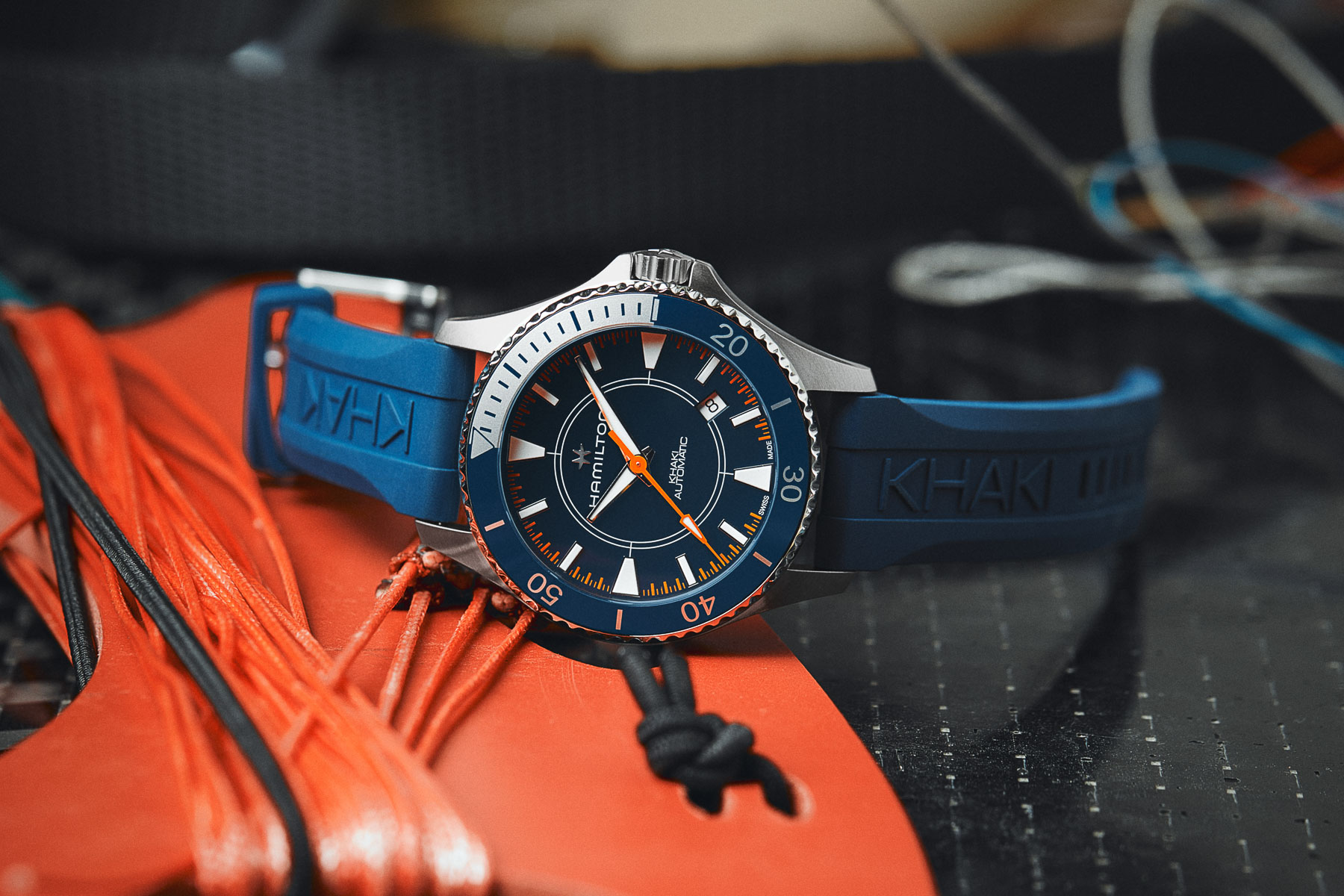 But first, let’s explore that speed-record attempt. I assume most of you have done 150 km/h in a car before. For those who may have never traveled at high speeds on water, the experience is incomparable to a car on asphalt. To put it into perspective, a normal leisure sailboat will feel quite fast going less than 20 km/h. I know, I know, we should talk knots for sailing. But since Syroco is going for a kilometer-per-hour milestone, I will stick to km/h here. If you have ever taken a ride on a speedboat going 80 km/h, you will know that it feels rather intense. And wet. That too.

Rewind to 2012. A unique vessel named the Vestas Sailrocket 2 broke the speed record for sailboats at 121 km/h. Look it up; it’s crazy. An earlier milestone was reached in 2010. Alexandre Caizergues was the first to take kitesurfing past the 100 km/h limit. He happens to be the founder of Syroco, now aiming to hit 150 km/h. 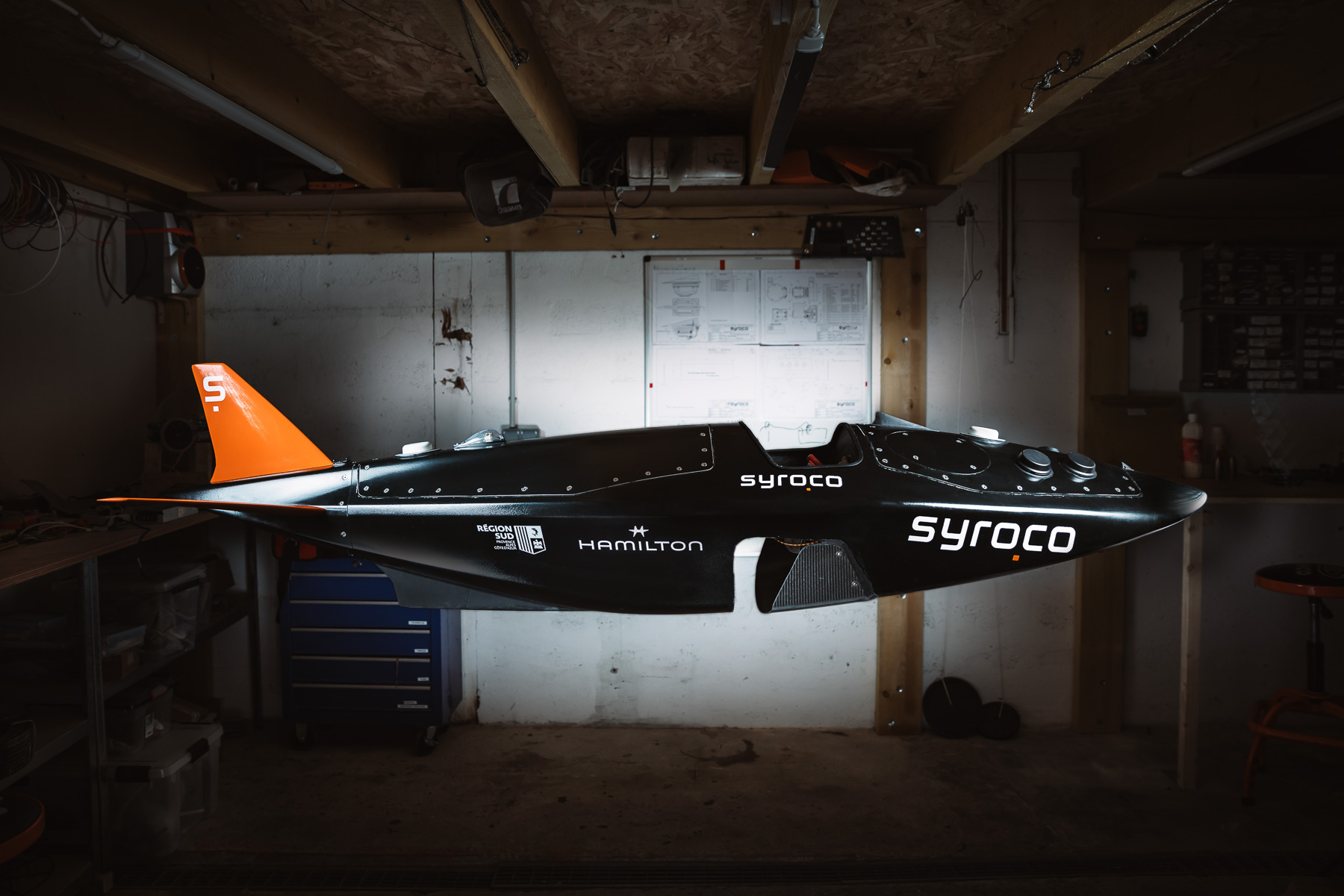 To do so, Syroco designed a vessel that looks nothing like any other sailboat. It looks more like a plane with its wings clipped off. In the water, it will be elevated above the surface on a long pole on an aerofoil and hanging off a kite. That took some out-of-the-box thinking, I bet. But hey, you need to do things radically differently if you want to push the limits this hard. The team is aiming to make the record attempt halfway through 2023. To celebrate the partnership, Hamilton made aesthetic changes to an otherwise standard Khaki Navy Scuba Auto. The watch has taken on the colors of the Syroco brand — blue, white, and orange. The case back is engraved with a Hamilton × Syroco graphic. Otherwise, this is a Khaki Navy Scuba as we know it.

Hamilton printed a white double circle on the dial, representing another graphical brand element from Syroco. It symbolizes the 150 km/h target. It is a sort of minimalist version of a sector dial and helps to set this special edition apart from other versions. 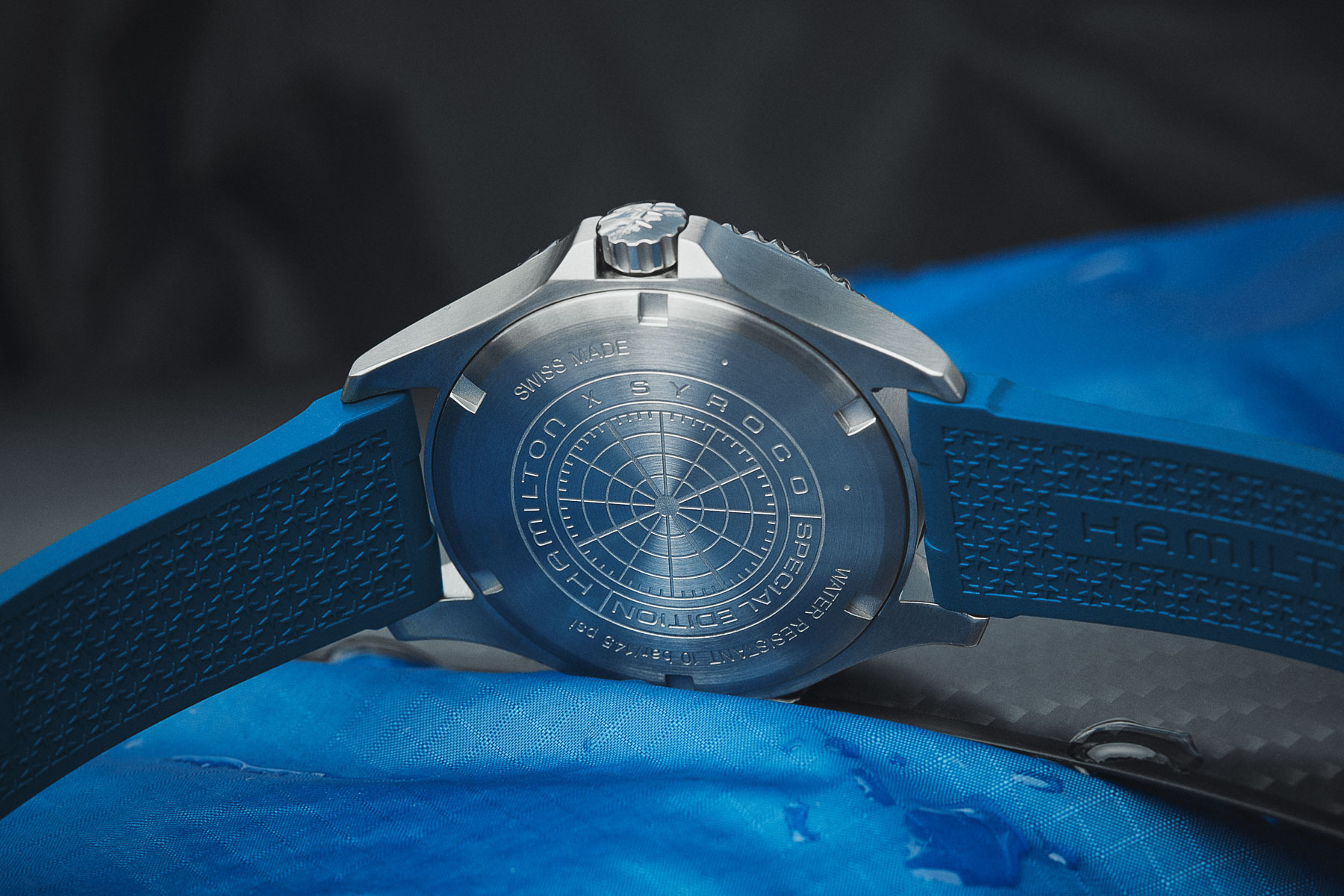 The stainless steel Syroco watch comes in at a crowd-pleasing 40mm in diameter. It does have rather long lugs, though, at 50mm from tip to tip. The thickness is just under 13mm. Hamilton offers the Syroco special edition on a nice blue rubber strap. The 20mm lug width is greatly appreciated. The case does have a screw-down crown, but the water resistance is limited to 100 meters. That is plenty for most uses, but it’s not overly impressive on a watch named “Scuba”. 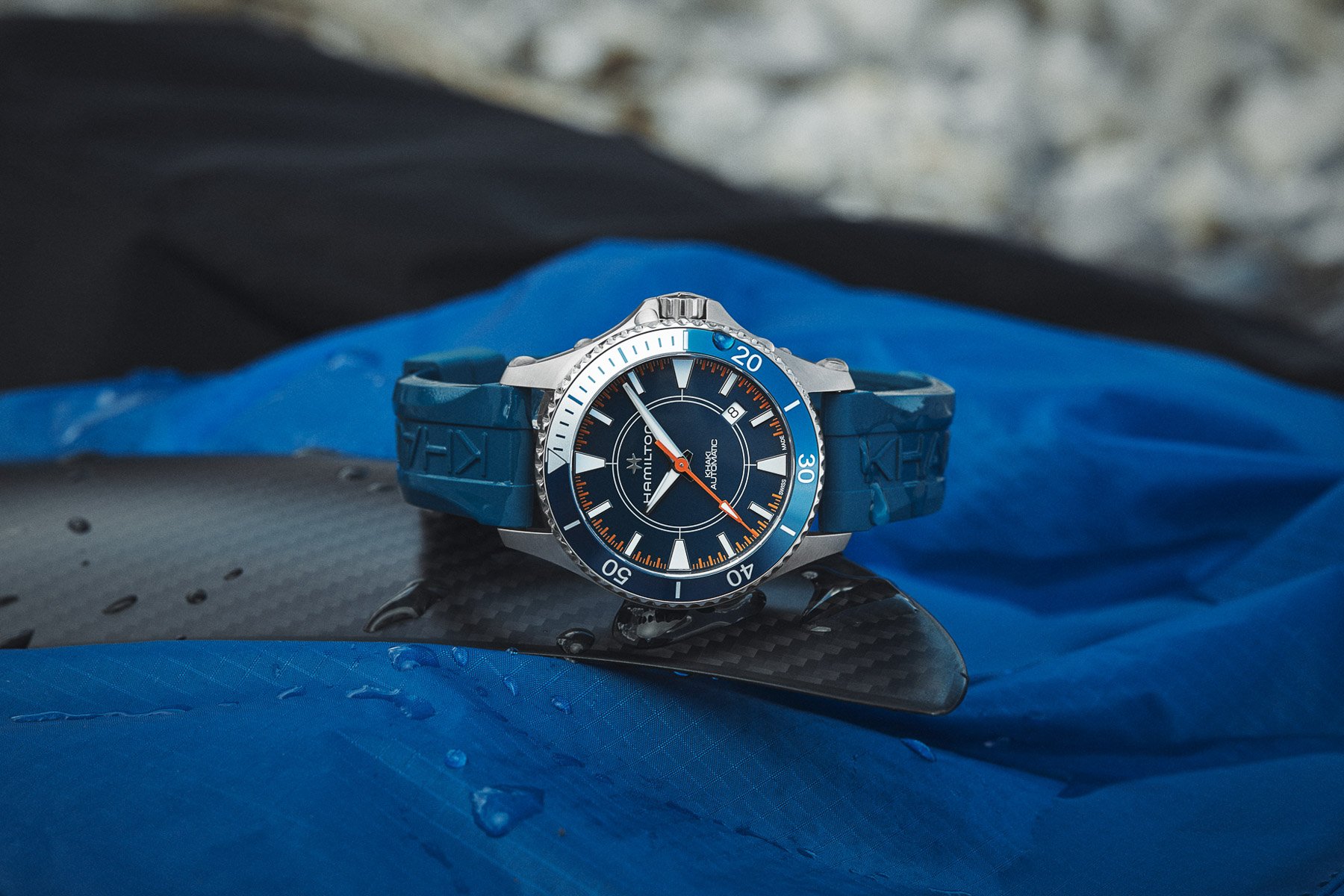 The blue dial matches the blue-and-silver aluminum bezel, and the white circles pair nicely with the white lume and date. The orange seconds hand and minute track provide a colorful highlight.

Inside ticks the automatic H-10 caliber. This Swatch Group movement, also known as the Powermatic 80, is also found in watches from Tissot and Certina, for instance. Its party piece is the impressive 80-hour power reserve. Otherwise, it is just a very dependable and easy-to-service caliber — a great choice for a watch in this segment. 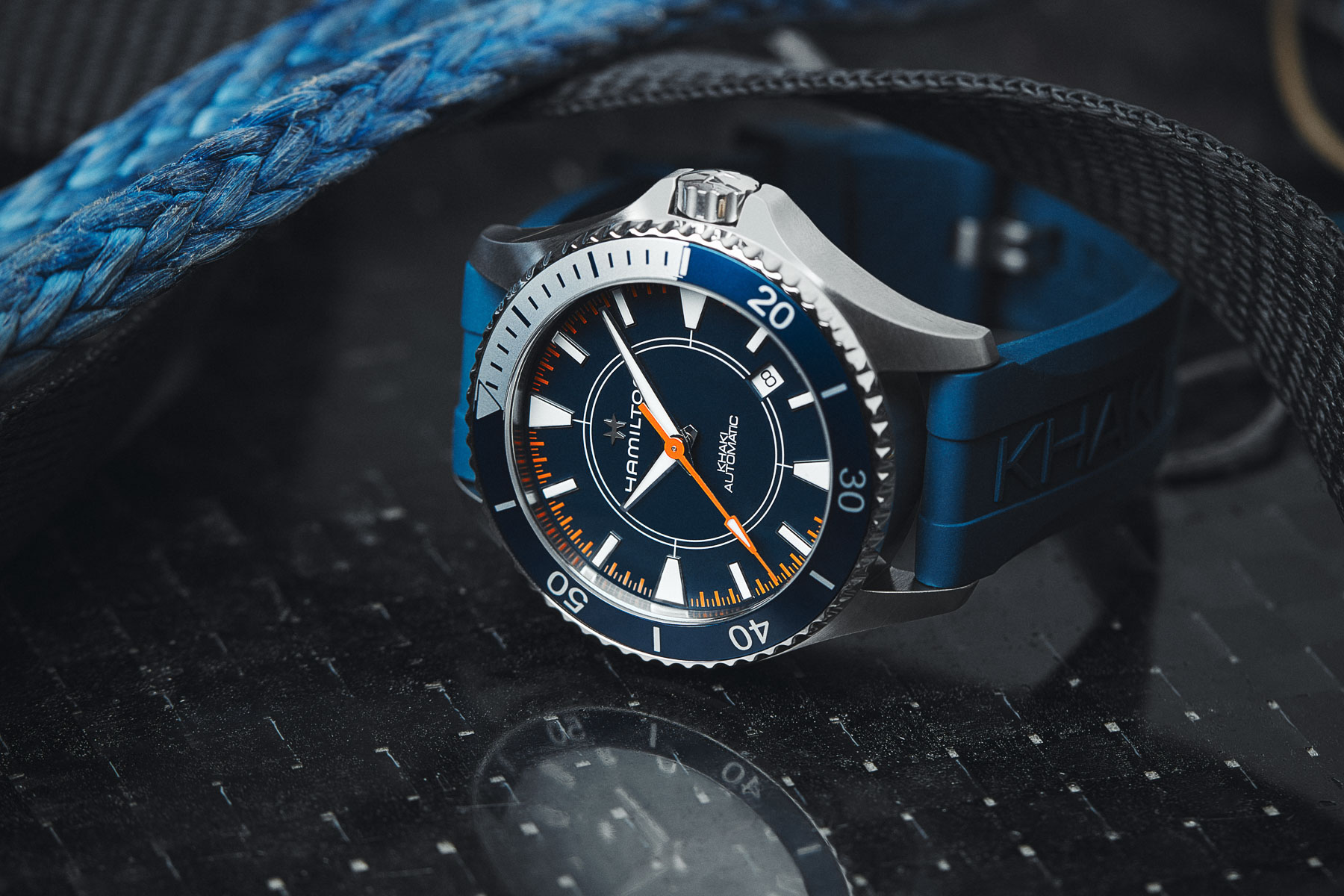 The Hamilton Khaki Navy Scuba Auto Syroco Special Edition (do you see why I avoided the full name up to this point?) is available now. It is priced at €825.

For more information, visit the official Hamilton website. Let us know what you think of this release in the comments.