Hands-On With The Longines Flagship Heritage

We have a weak spot for affordable mechanical watches. There is absolutely nothing wrong with dreaming about a complicated piece of haute horlogerie with a flying tourbillon from one of the prestigious big brands out there or from one of the indepedent watch makers. But in all honesty, how many people are fortunate enough to actually wear one on the wrist? 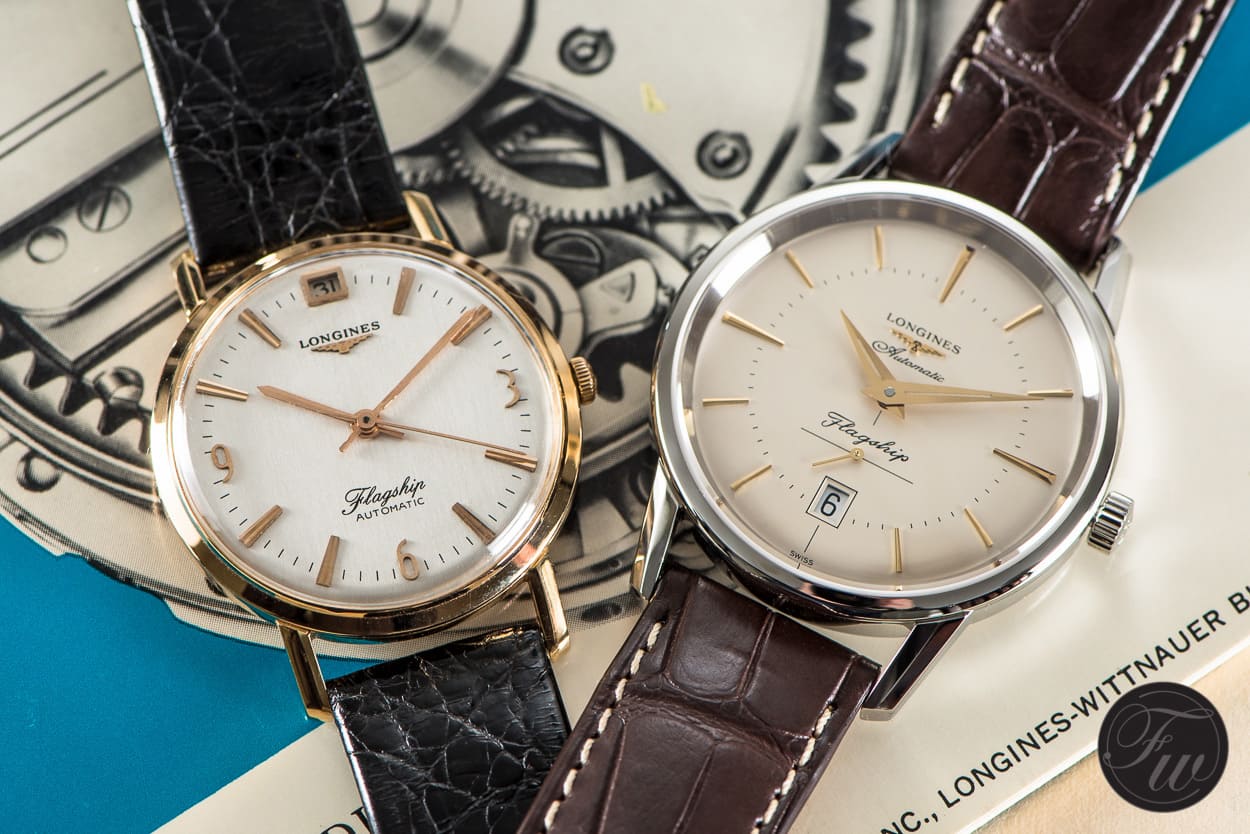 Here at Fratellowatches we have a weak spot for brands who are capable to put an interesting mechanical watch in the market that is affordable and nice to wear on a daily basis. With the Legend Diver (a review on it can be found here), Longines caught our attention as a brand to keep an eye on. After that, we reviewed their Heritage 1951 chronograph and that led us to the idea of reviewing this Longines Flagship Heritage and compare it to its real heritage, the Longines Flagship model from the 1960s.

How does the new Longines Flagship Heritage (reference L4.795.4.78.2) keep up a vintage Longines Flagship? What are the similarities between these watches with a 50 year age difference and is the connection still valid? However, before we start to answer those questions we’d like to zoom in on the Flagship Heritage L4.795.4.78.2 and tell you something about how it wears, feels and performs. 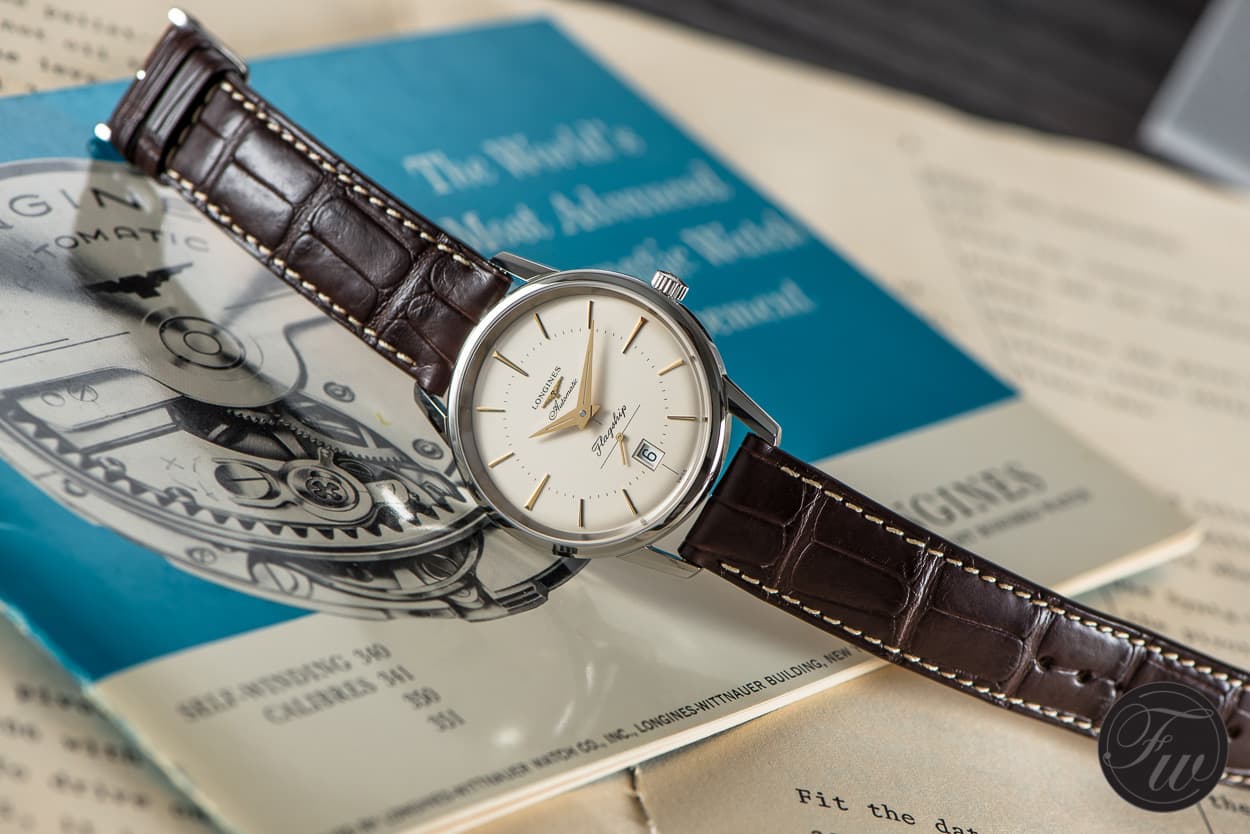 Shall we start with one of the best features? The price, it has a 1190 Euro list price (including 21% VAT here in The Netherlands). There, we’ve said it. 1190 Euro. But price wouldn’t mean much if we’d tell you what you actually will buy for that money. This money will get you a 38.5mm stainless steel watch on a real alligator strap with an automatic caliber L615 movement. This movement is based on ETA’s caliber 2895.1, which is a bullet proof no-nonsense movement.

One of the great things about this watch is definitely the dial. A cream-ish color dial with gilt hour markers and dauphine hands. The applied Longines logo and hour markers immediately remind you of those wonderful 1950s and 1960s watches and images appear in our imagination of people performing painstaking work in those years by applying these indexes by hand. That’s not all, the used typography (or font) on the dial telling us it is a Flagship watch with an automatic movement also is a nod to those post-War decades. Don Draper could be wearing one in the TV hit series Mad Men.

One of the other cool features is the case back. Loyal readers of the Fratello blog know that we are not particularly fond of having a transparent caseback on just all mechanical watches. Some movements deserve to be seen a bit more than others. Not that there is anything wrong with an ETA based movement, but it isn’t exactly like a car with a Ferrari engine that needs admiration. It is just a good movement.

So instead, and we are happy to see this, Longines decided to put the enamel emblem of the Flagship on the back of this watch, much like they did with the Flagship models in the past. We’ve also seen this with vintage Conquest models and depending whether a watch was made out of gold or (just) stainless steel, the emblem was different. Back to the Flagship however, it shows a ship on a gold medallion. The shape is made out of gold and surrounded by a blue enamel color.

The rest of the stainless steel caseback gives us some information like the reference number, model name, serial number, the fact that it is water resistant and that it is a Swiss made watch. It also has some tiny icons engraved showing the level of water / pressure resistance and the fact that it has a sapphire crystal. With all due respect, Longines could have done without all that information and just have the serial number engraved to accompany the beautiful enamel emblem. The good thing is that this gold and enamel emblem gets all the attention. At least to us, we had to look twice before we noticed the whole information table on the back side. 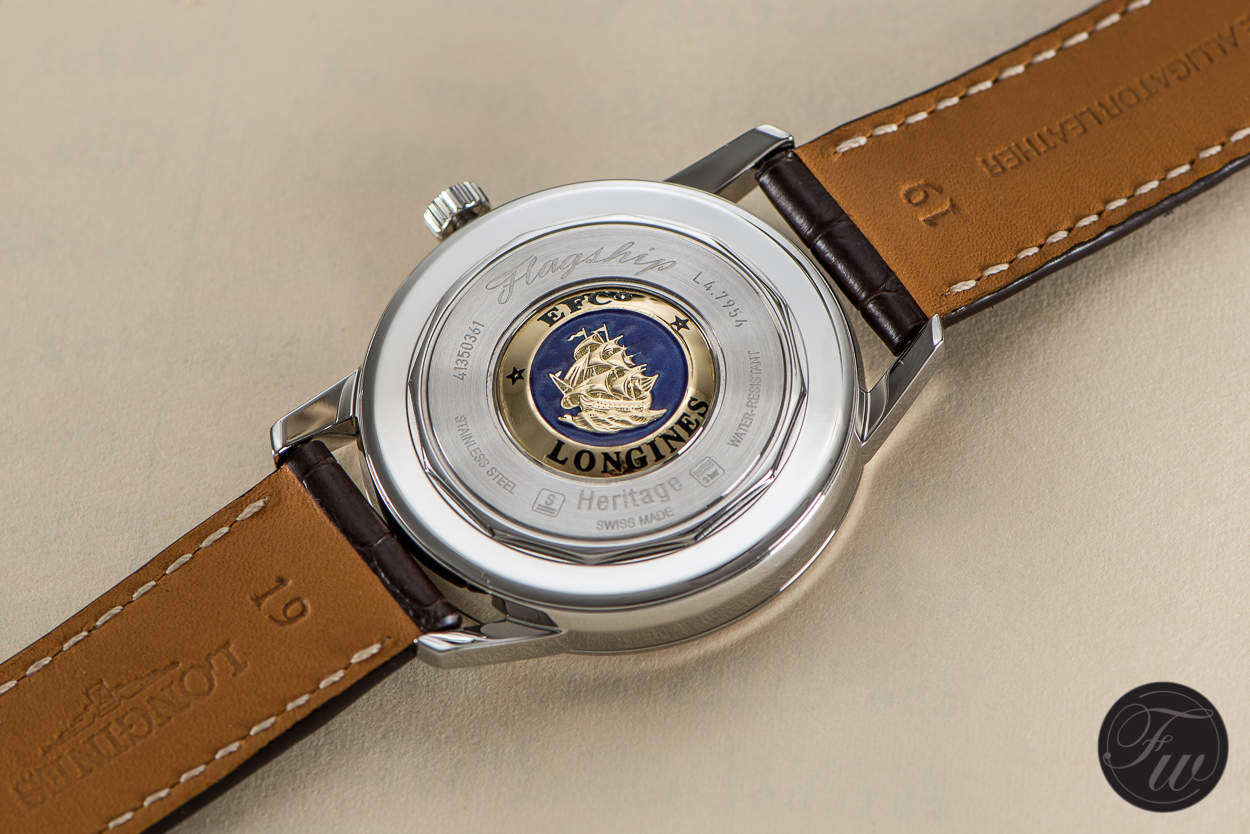 The strap is a genuine alligator strap and comes with a nice and elegant stainless steel pin buckle with the Longines logo. The alligator strap is a bit padded and has relatively large scales. To be honest we’d might have preferred a crocodile strap with small scales, the ones you see often on dress watches. However, we are also convinced that people will wear this watch not only as dress watch but as an all-rounder so an alligator strap is perhaps just that. More all-round.

Having that said, how does it keep up to a real vintage Longines Flagship? Are they still clearly family or was it merely a marketing decision to re-use an old name?

To answer the last question first, it was not. There are quite a few similarities with the real deal from the 1960s. Although the Longines Flagship and Conquest models from that era were more or less direct competitors to the Omega Seamaster and Constellation watches of that time, we have to put this into perspective. Studying the vintage Flagship watches with their in-house manufactured calibers 341 and 343 we quickly noticed that these watches were positioned differently than they are now. However, with all the gained knowledge and improvements of the manufacturing process through-out the decades, it is fair to say that the new Flagship Heritage is definitely a watch that can measure itself with these vintage watches quality wise. Whether the watch is just as interesting is up to the buyer of a new or vintage Longines Flagship. 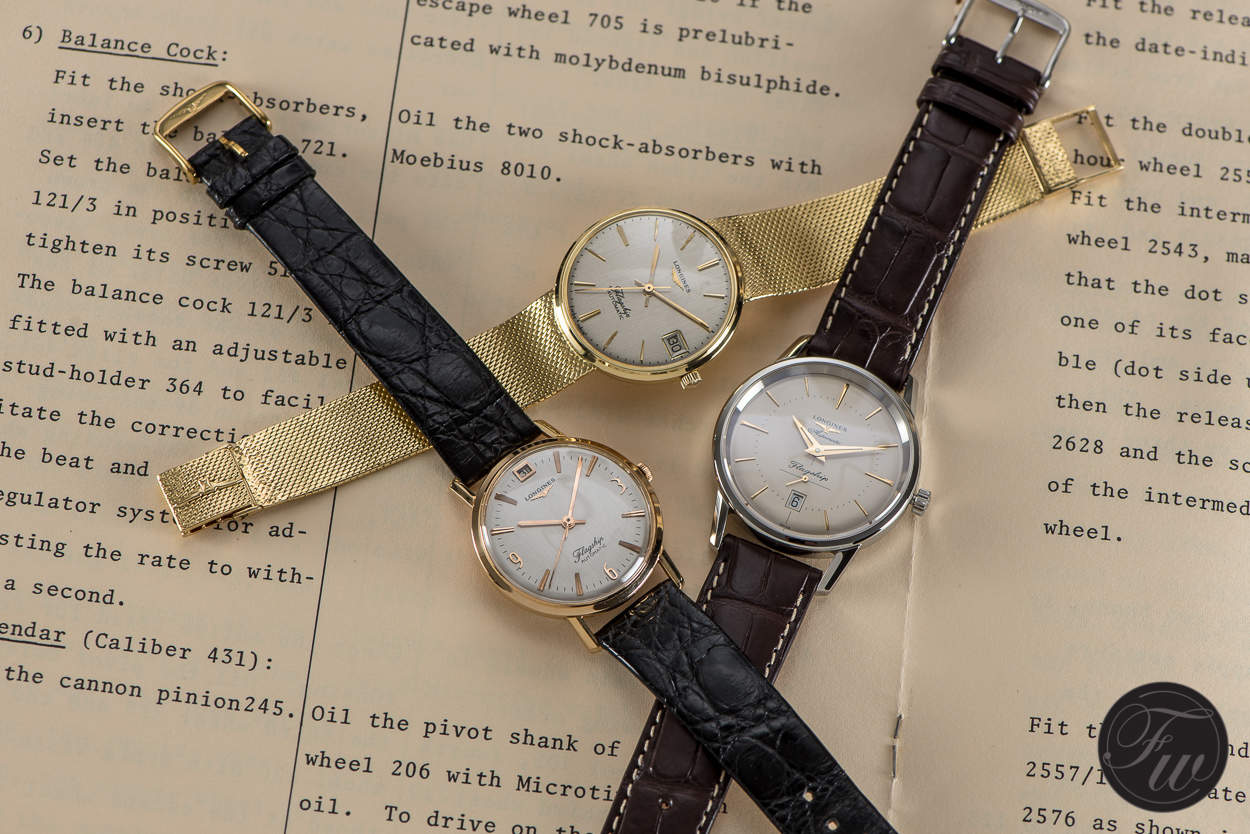 As you can see in the photo above, the stainless steel Flagship Heritage has a lot of optical similarities with the vintage reference 3407 (rose gold) and 3417 (yellow gold) Flagship watches. The hour markers, dial color, applied Longines logo and typography for the model name are – like discussed earlier – eye-catchers that show resemblance with the Longines Flagship 3407 and 3417 as pictured. The biggest ‘change’ is perhaps the diameter of the watch. Compared to the small Longines Flagship models in gold, the 38.5mm looks and appears to be a giant. On the wrist however, it is a modest watch and the vintage Longines watches appear to look small. Accepted small though, since it is a cool vintage piece.

Flipping them up-side-down, you will see the Flagship emblem on the back. They are unmistakably family, these Flagship watches with a 60 years difference of age. 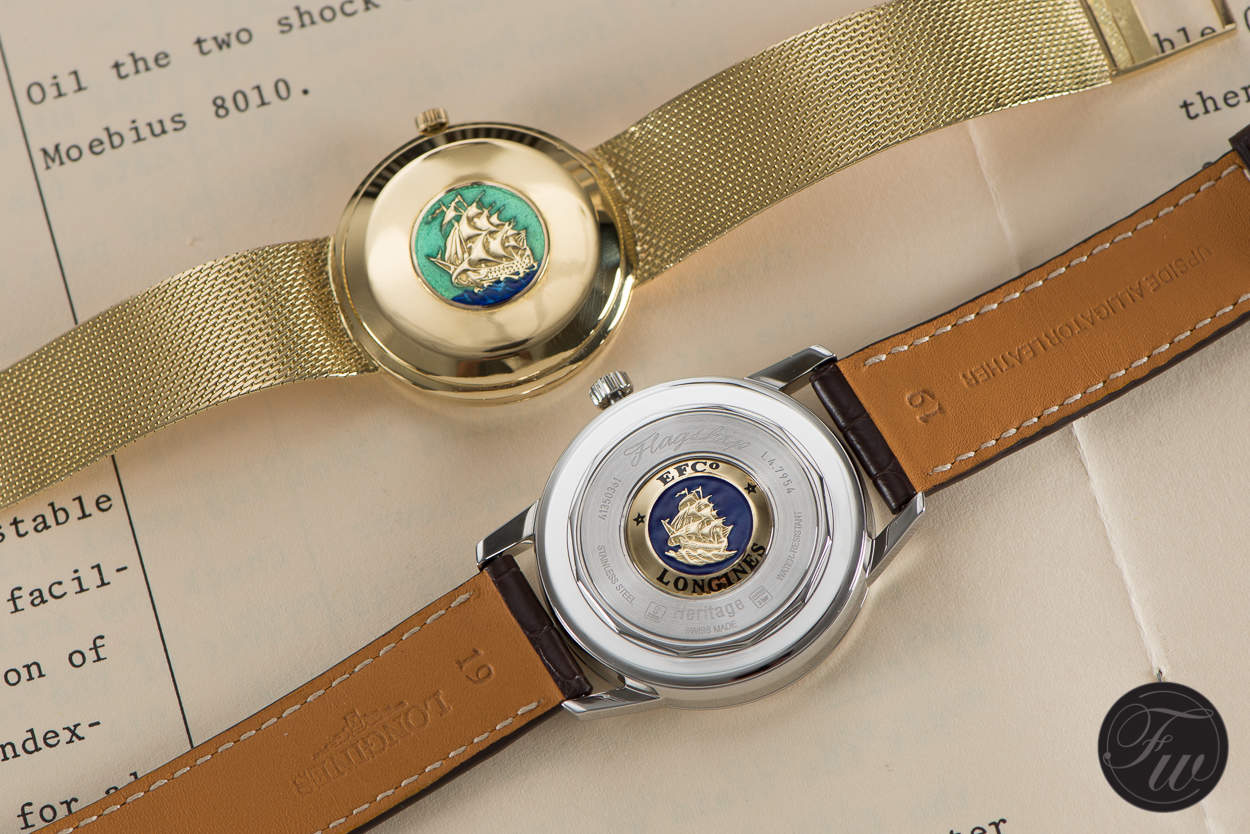 The collector of vintage Longines watches who was so kind to have our way with them, also showed the case back of the Longines Flagship reference 3407 that has been made transparent. Of course, he still owns the original case back that belongs to it but he’d like to admire the in-house developed and manufactured Longines caliber 341 movement. An interesting ‘decentralized’ movement that is quite sought-after by collectors of vintage watches. 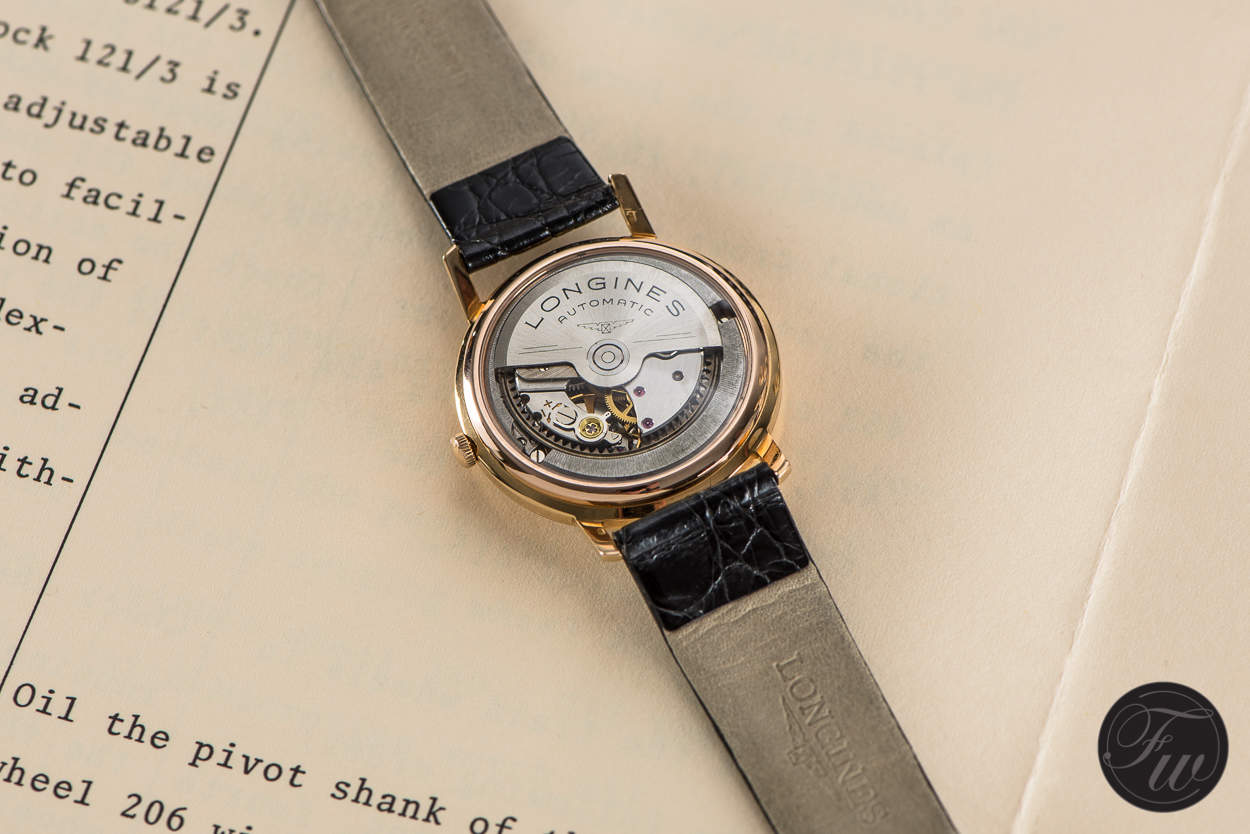 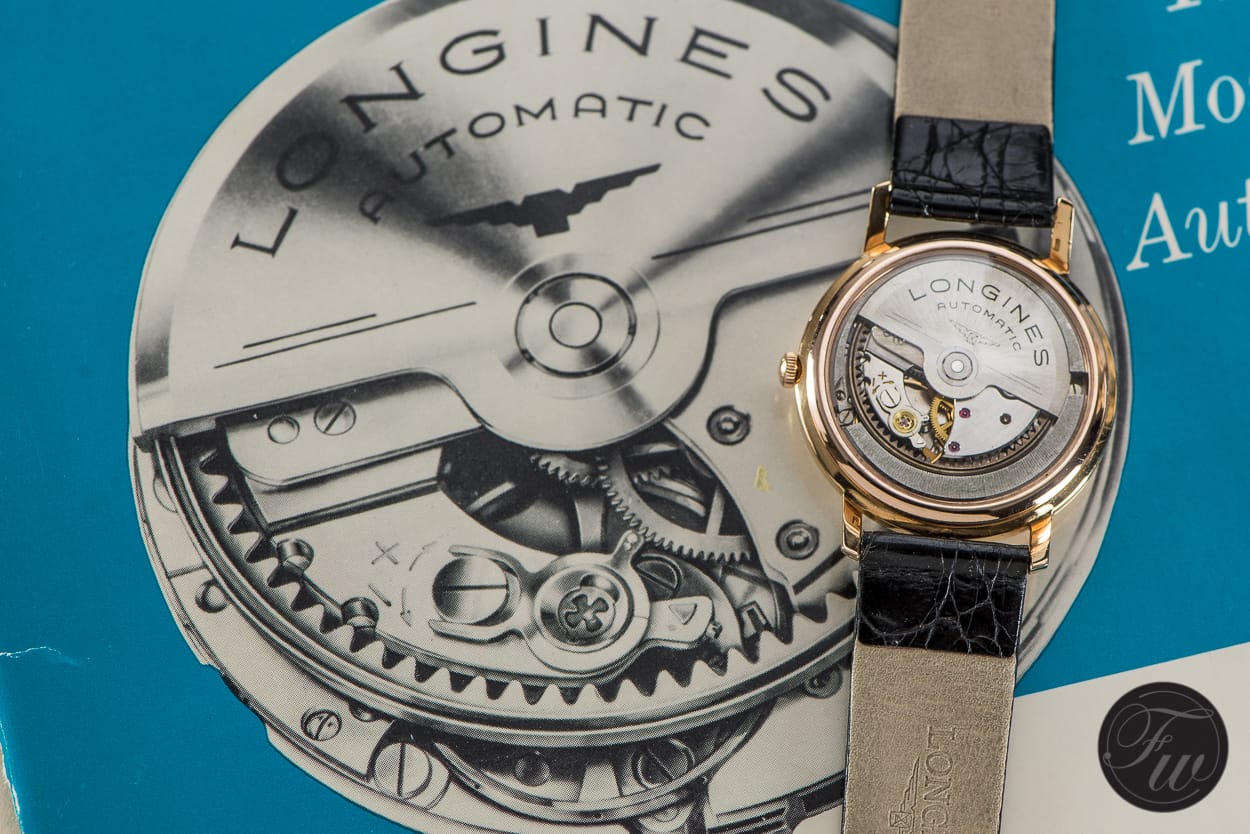 As promised, we also show you the case backs of the Conquest models from the same era. The stainless steel model (currently a restoration project of the owner) has a different enamel drawing than the gold Conquest models. 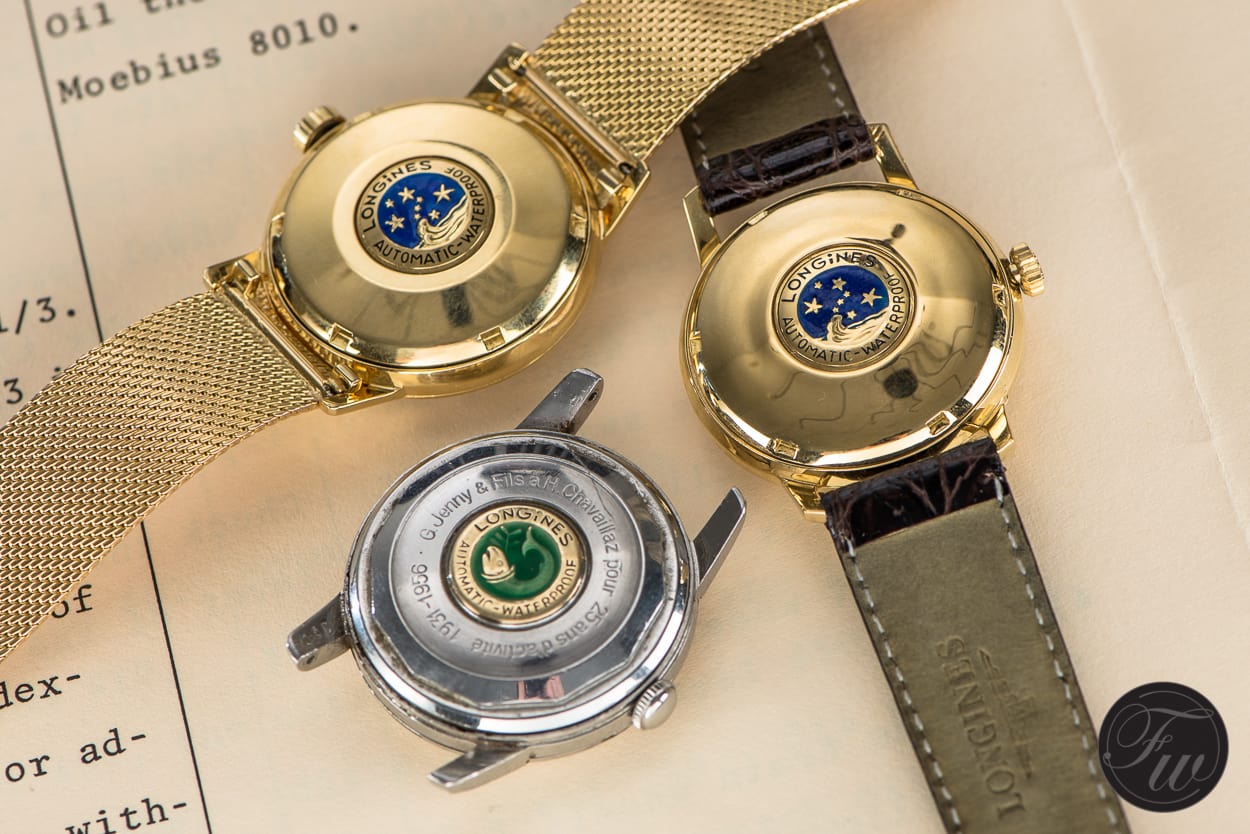 To sum things up after having the Flagship Heritage for a few weeks and playing around with the vintage Flagship models for an afternoon, we’d say that both have their own audiences.

The new Flagship Heritage is definitely an interesting watch for everyday wear and for the guy (or girl) who wants to have a solid quality watch with a reasonable price tag. People with a huge interest in vintage watches probably find the vintage models to be more appealing.

We understand both and would have a hard time choosing between a vintage Flagship or a Flagship from the actual Longines collection. It is still the same brand with a lot of similar brand values they also had in those 1950s and 1960s, but the execution is just different. We believe that someone who has bought (or will buy) the Flagship Heritage might eventually also buy one of the vintage pieces because they are just fun to have / own.

Vice versa we don’t believe that vintage collectors will buy one from the current Longines collection, but they surely will respect the watch and Longines for how they deal with these modern re-issued models. They are crafted with a lot of respect for the heritage of the brand and its watches from the past.

Larger versions of the photos can be seen below in the slide show by clicking the thumb-nails.

More information on the Longines Flagship Heritage can be found on the official Longines website.