Before I take a closer look at the G-Shock GMW-B5000TVB-1ER, there’s something I want to address. There are probably many Fratelli who won’t even read this article. They will see a G-Shock in the headline image and will think “quartz”. They will then think “cheap”, and then, “not a proper watch”. And from a certain viewpoint, they will be entirely correct. That would have been me not very long ago. If a watch didn’t have a beating mechanical heart (or at the very least a Spring Drive), then it was of no interest to me. Quite apart from the fact that it looks like the market for quality quartz movements such as Grand Seiko’s or F.P. Journe’s is really heating up — a huge topic in itself for a different article — G-Shocks, to me, were always cheap plastic quartz and in no way comparable.

Furthermore, the idea of a G-Shock that wasn’t cheap was genuinely laughable to me. I remember literally choking on my coffee when I got to the end of the article about the Hana-Basara and the price was revealed. Judging by the comments, I wasn’t the only one. In terms of the movement and functionality, this was no different from a watch that one could buy for £500, yet it cost north of £7,000. I simply could not comprehend this. 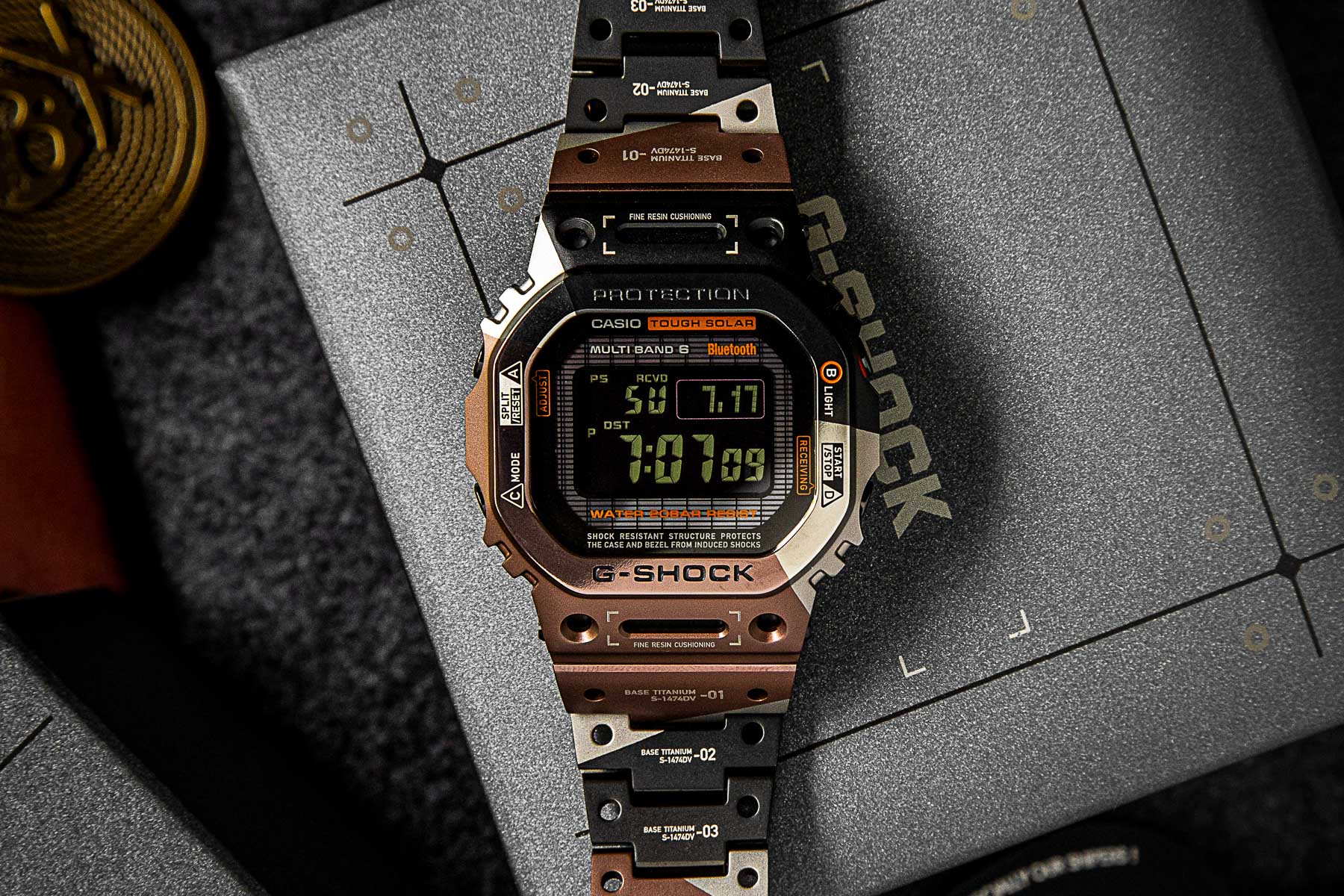 Not a quartz crisis, but a revolution

Then, in 2022, Omega and Swatch did something remarkable. Like everyone who really cares about watches, I was immediately fascinated by the MoonSwatch. My view fluctuated daily as to whether it was genius or terrible. It still does. But my two young girls liked the look of them and initially each wanted one. They had shown no real interest in having a watch of their own before and — prior to the now infamous U-turn on eventual online availability — I said to them that I would try to get them one each when they became available.

Of course, young kids have short attention spans and are impatient. They very quickly tired of waiting for their MoonSwatches, and (along with many of their classmates, apparently) found out about and started wanting a G-Shock instead. In particular, they fancied the Mini CasiOak in nice, pretty colors. In their heads, it was “in the bag” that Daddy was buying them a watch, and to be fair, they know that I don’t take much encouragement to buy a watch. That saw me embarking upon my usual ludicrous level of internet due diligence before a watch purchase, and… my eyes were opened to a whole new world that had previously eluded me. 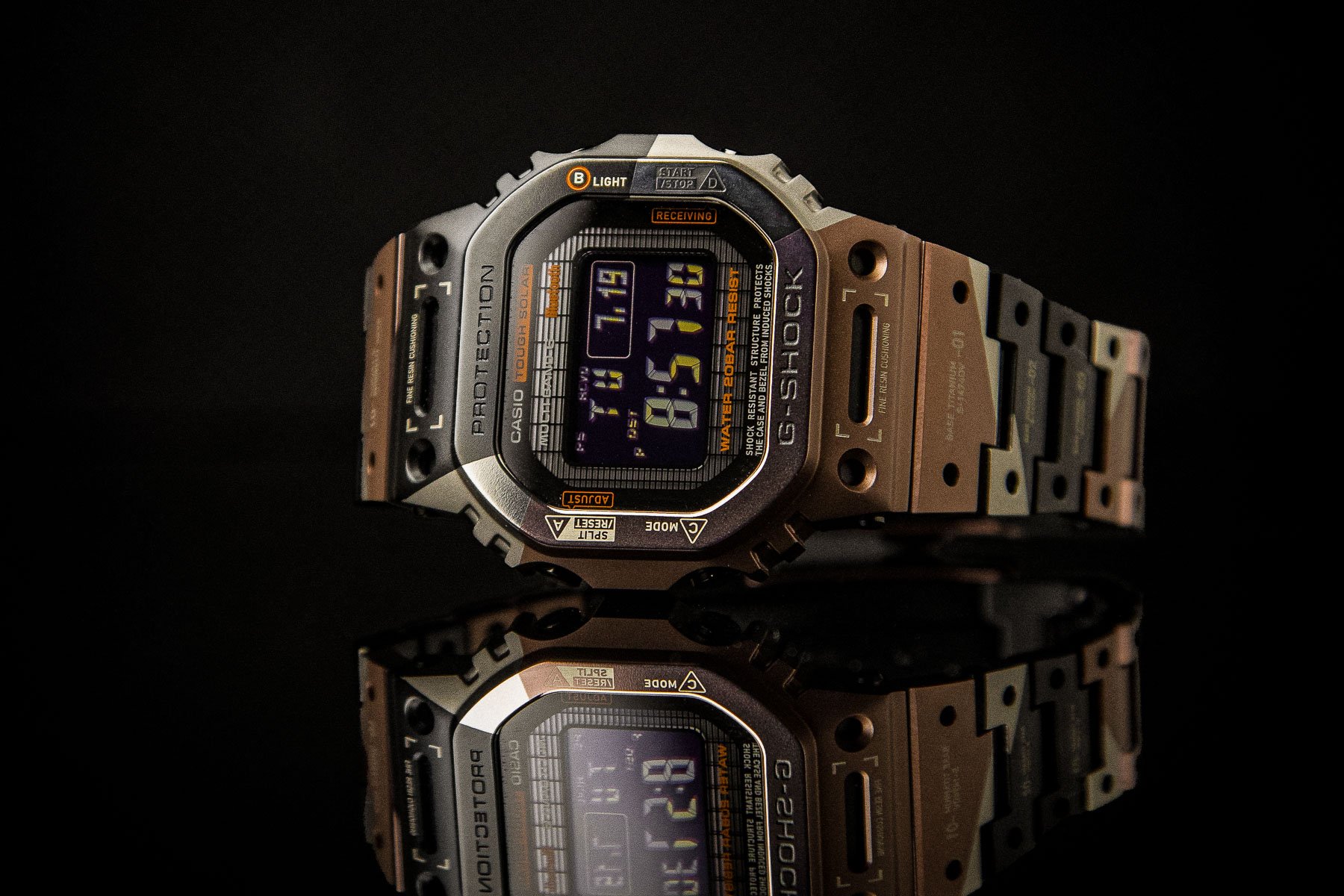 What you get for your money with (a regular) G-Shock is just crazy. My girls would have totally wrecked a MoonSwatch within a matter of weeks, but although it will no doubt get banged up (and possibly chewed upon by a canine), they will really have to go some to wreck a G-Shock. So they are getting one each. So that they can see the styles and colors and try them on for size and fit, we have decided that we are going to go to a boutique with a good range. We are looking forward to it.

Swatch and Omega have therefore indirectly created two new future watch collectors as they had hoped, just not initially for either of their brands! But in the exercise that I have just described, I have also been led to research what was a whole new area of the watch industry to me. And in doing so, I very much liked what I saw, not just for my kids, but for me as well. Again, I have Omega and Swatch to thank for that. I would not have considered buying a low-cost quartz watch before the MoonSwatch landed. 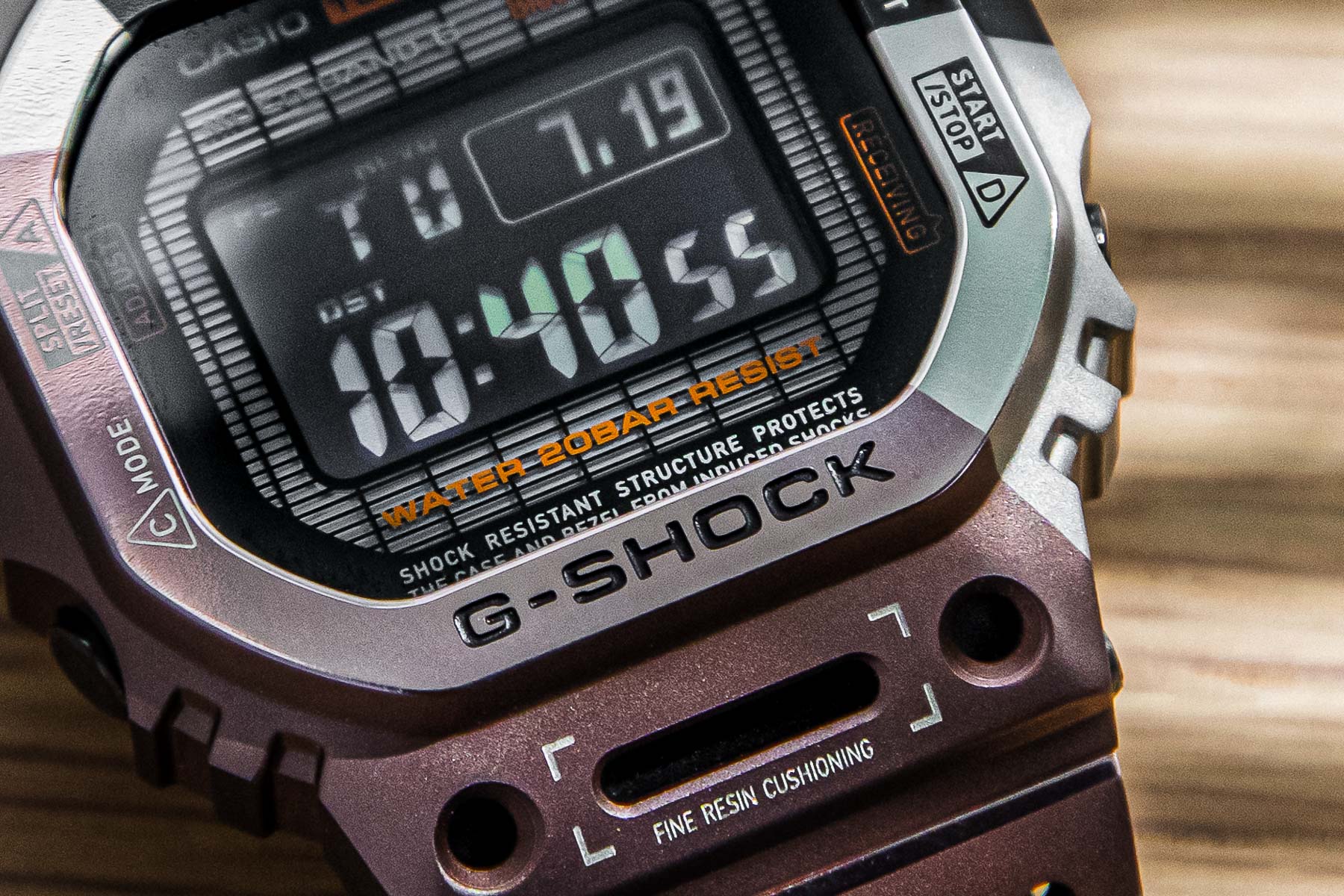 This finally brings me around to the GMW-B5000TVB-1ER Titanium Virtual Armor (to give it its full title). I probably would not have known about this watch if I hadn’t signed up on the Casio website to get a discount code during my initial research. By the time I would have read about it (if I had bothered to at all) it probably would have been sold out anyway. And that would have been a crying shame as this watch is something else. Spoiler alert — this is not an impartial review of the watch. I bought it without giving it a second thought as soon as it was released. 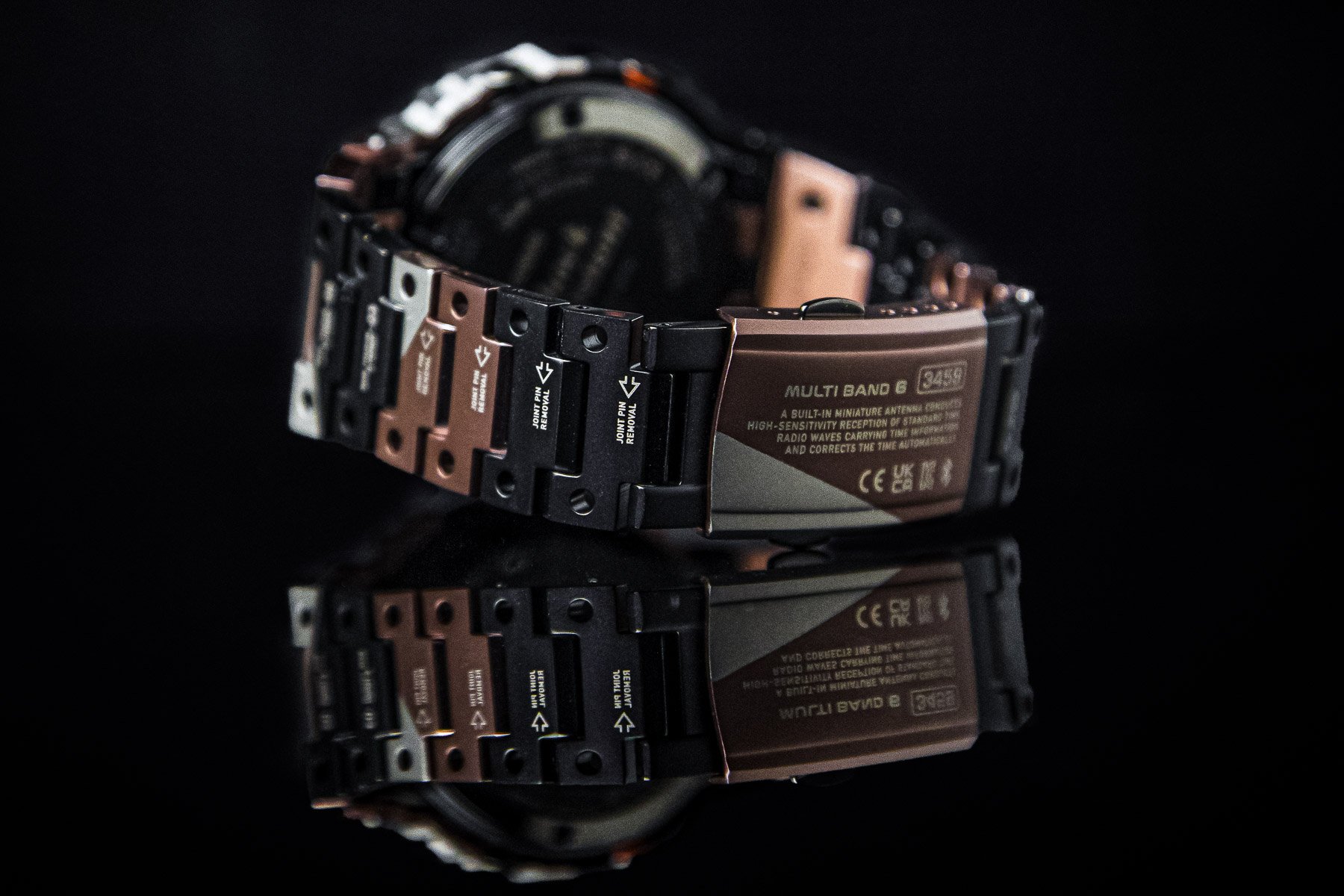 Before I get to the functionality and build quality, the one thing that immediately struck me is just how cool it looks. I know that is a rather lame descriptor, but I just can’t think of a better way to convey it. In my earlier years, I was a big fan of video games, and probably my favorite game designer was Hideo Kojima. The Metal Gear series games were huge fun to play, but moreover, the design was just so achingly cool and on point for pretty much everything you could see in the immersive virtual worlds he created and constantly refined over the life of the series. 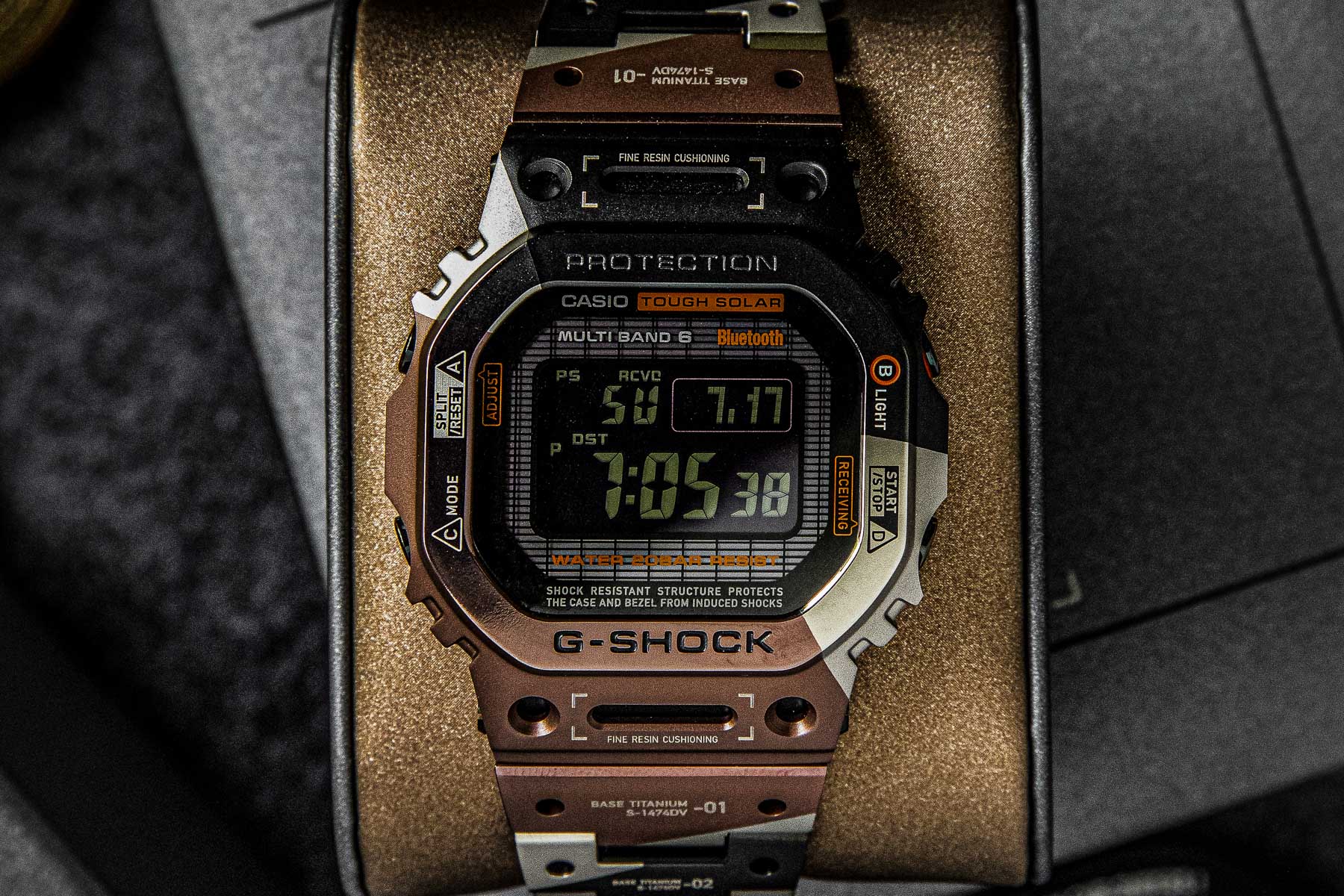 To me, this watch looks like something straight out of one of the games set in more modern times, particularly Guns of the Patriots. I can picture Snake wearing this exact watch, and that, to me, strikes a different aesthetic chord of desire that no beautiful Swiss masterpiece at any price could ever strike. But it isn’t just the design — it is the execution of that design that captivates me. The various techniques that Casio has used to apply the pattern to the watch head and bracelet yield an amazing end result. The contrast of finishes and colors that flawlessly transition into each other can only really be appreciated “in the metal”. 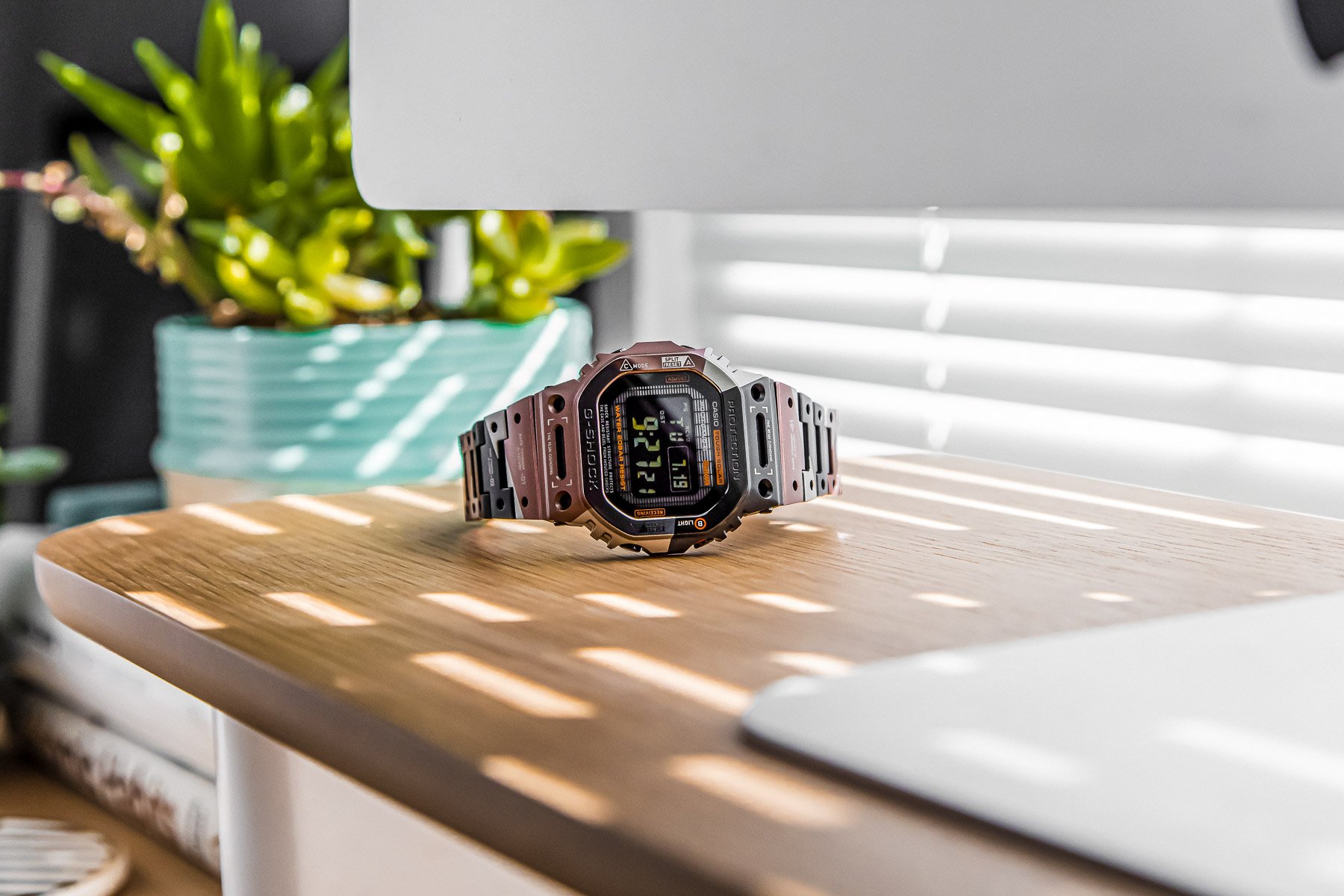 It looks great in press images, but it looks phenomenal on the wrist. It also feels like a quality, premium product, as it very well should at £1,450, about 10 times the price of a “standard” resin version. Oddly, given what I would expect to pay for a mechanical piece with this level of finishing, I feel like I have scored a great bargain rather than paying silly money for a G-Shock. When you factor in the titanium case and bracelet, the cost of working with that material to this standard, and the sapphire crystal over the more traditional models, the price gulf starts to seem pretty reasonable. 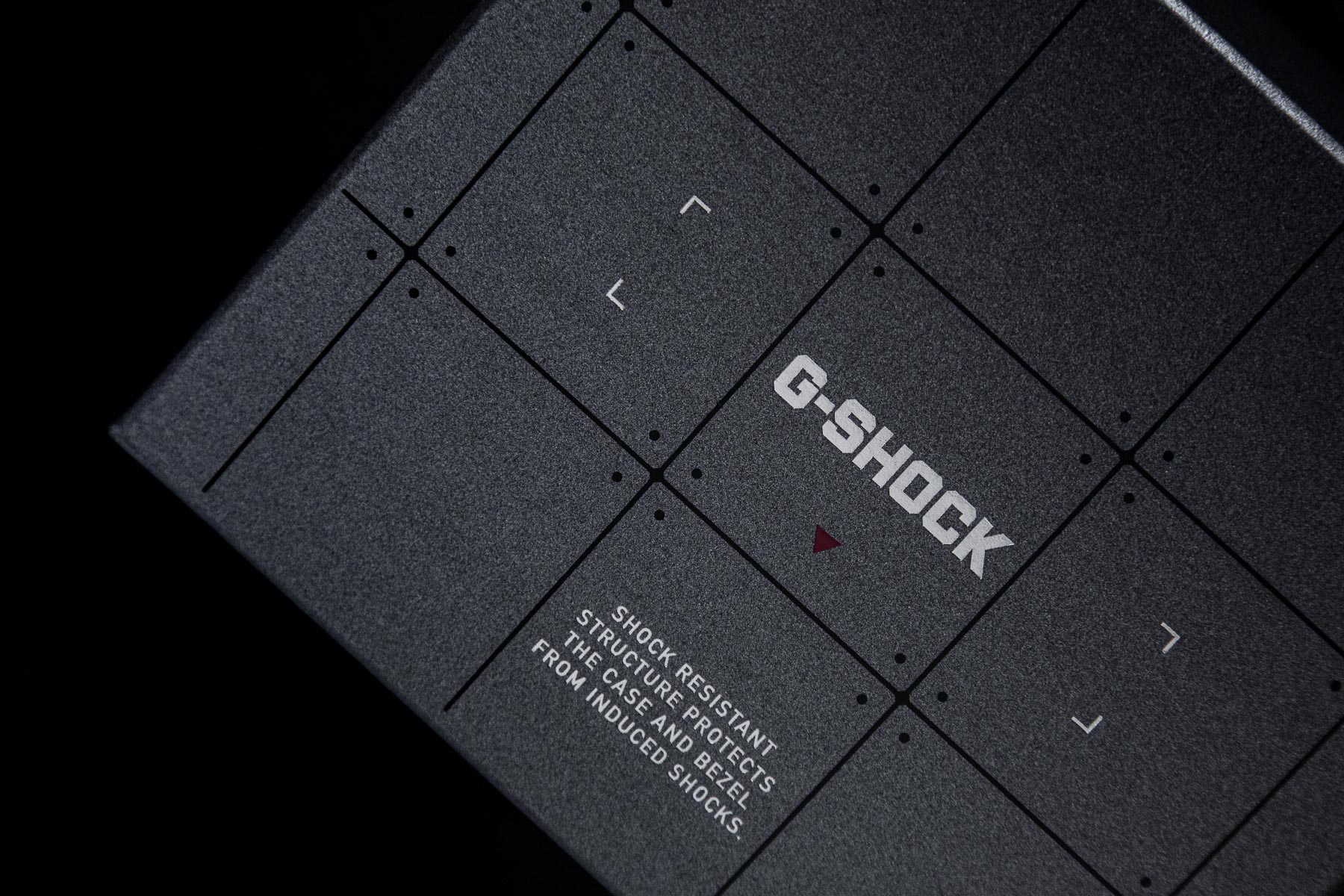 Now, of course, the breadth of functionality is what sets it apart from a mechanical watch, but it’s also what makes most of us view it as lesser than that. Without stating an exhaustive list this will (to an atomic-clock level of accuracy) perform the functions of a GMT, a world timer, a perpetual calendar, a chronograph, and an alarm. It will do so whilst being water resistant to 200 meters and being all but indestructible. And it has Bluetooth connectivity to an app on your phone that makes it a breeze to set up and configure.

Additionally, it has Multi Band radio time correction. Oh, and it is solar-powered with a battery that, in the real world, will be unlikely to ever run out. Finally, it can be set to automatically light up briefly when you tilt your wrist in the dark. And it can find your phone for you. I think that’s about it.

It will never replace my mechanical watches — or my high-end quartz ones — but it definitely has its place in my collection. It has a level of robustness and autonomy (you can operate it perfectly well without pairing it to a phone) that a smartwatch can’t match. And just to finish off on the positives, it is supremely comfortable to wear, perfectly sized and proportioned to fit most wrists, and, with that titanium construction, as light as a feather. What are its downsides? Well, the “movement” is its primary flaw. If you can’t get past its quartz-digital nature, then this is never going to be the watch for you, regardless of how well it is executed and how good it looks. If you are the kind of collector who thinks an Oysterquartz isn’t a proper Rolex, then this will be a hard pass. 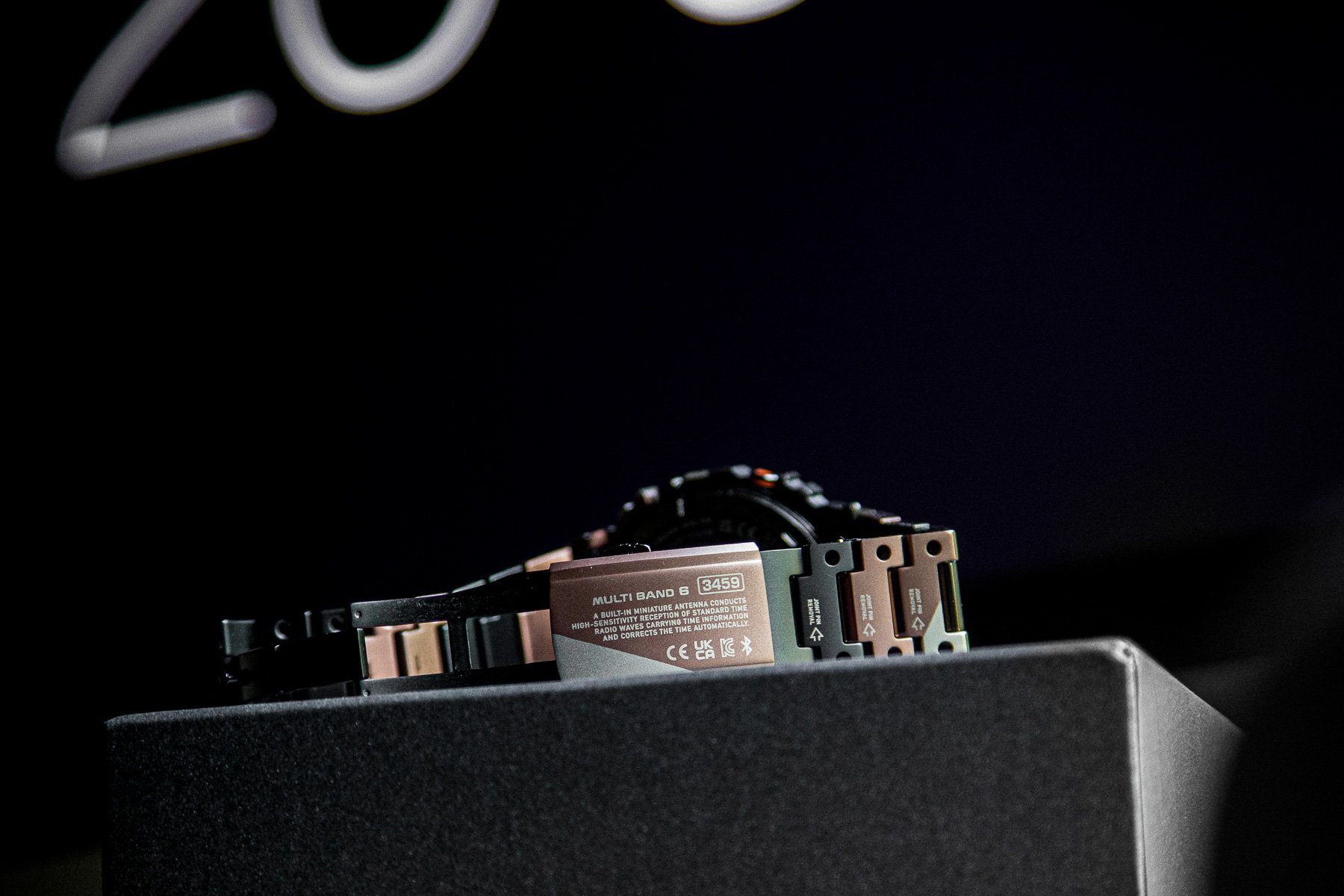 The bracelet uses pins and sleeves. This seemed a bit odd to me, but am I really entitled to expect a more sophisticated construction at this price? After all, if it is good enough for Czapek with the Antarctique, then it is surely good enough for Casio. What isn’t good enough is that (unlike Czapek) Casio does not provide a tool to allow you to adjust it. Since almost all of these will be sold online by Casio, I think that is a glaring omission. I had my own tools, but it was still one of the more difficult bracelets to adjust.

On the topic of adjustability, beautifully machined and finished as it is, the clasp doesn’t allow for on-the-fly adjustment. Instead, one needs to use a spring bar tool (or toothpick). Again, this is not a deal breaker. Grand Seiko doesn’t even give you that method of adjustment, for example. However, in a sports-oriented watch like this, I would have hoped to see at least some degree of non-tool adjustability. Other than that, I really can’t find anything to criticize.

This watch has been my favorite purchase of the last 12 months. Given what that time period covers, that is quite the statement, and I find myself pausing as I type this, but it is true. Yes, it is functional, robust, and so on, but the simple fact is that it is so cool and, as I have decided, very reasonably priced. Casio has issued versions of this particular watch that cost more than double the price. Although the level of finishing will no doubt be absolutely sublime, it starts to get a bit silly for a G-Shock in my opinion.

For the serious watch enthusiast looking for the single G-Shock for their collection, I can’t recommend this highly enough. Open your eyes. Give this (or other all-metal G-Shocks) a try. I am fairly sure you won’t feel disappointed or short-changed.

A big thanks to @HorologyVibes on Instagram for the photos used in the article.

Hot Topics
Introducing: The Omega Speedmaster Super Racing With Spirate System
149 comments
Design Vs. Specs — Which Is More Important To You When Buying A Watch?
85 comments
The Updated Bracelet For The Omega Speedmaster Professional 3861 — Here Is What’s New!
51 comments
The Time To Buy Is Now: How The Current Economic Climate Influences Watch Buying And How You Should React
49 comments
Introducing: The New Cartier Tank Française
49 comments
Popular
Rolex GMT-Master History And Overview Of All Major References
Robert-Jan Broer
21
10 Tips For Better Watch Photography
Bert Buijsrogge
12
Rolex Submariner Hulk versus Seiko SLA019 : Shades of Green
Michael Stockton
29