Let me be honest here. Dead honest. When you think about a mechanical divers watch, Edox is not the brand that first comes to mind. I am pretty sure this also applies to you (assuming you don’t work for Edox in some way). When I think of Edox, I have to think about those ultra slim watches they advertised in the 1990s. I remember joining a business diner with my step-father and his business partner had this very thin Edox strapped on his wrist. Already interested in watches in those days, I asked him about the watch and he told me that the reason for buying the Edox was indeed the fact that it was very thin. That was basically my one and only experience with the brand until recently.

The box that I received was already impressive. A huge carton outer box that has this big etui inside, with a bright green zipper. Edox is embossed in this watch etui. The package from Edox could not be more complete: besides the big 46mm watch there is a rubber strap, set of push-pins and a tool to swap the bracelet for the rubber strap (or vice versa). The watch in this package, the Edox Hydro-Sub 50th Anniversary Limited Edition (North Pole) is something totally different from the ultra slim watch that I’d seen about 2 decades before. Not the slightest similarity to discover, except for the brand’s name on the dial. 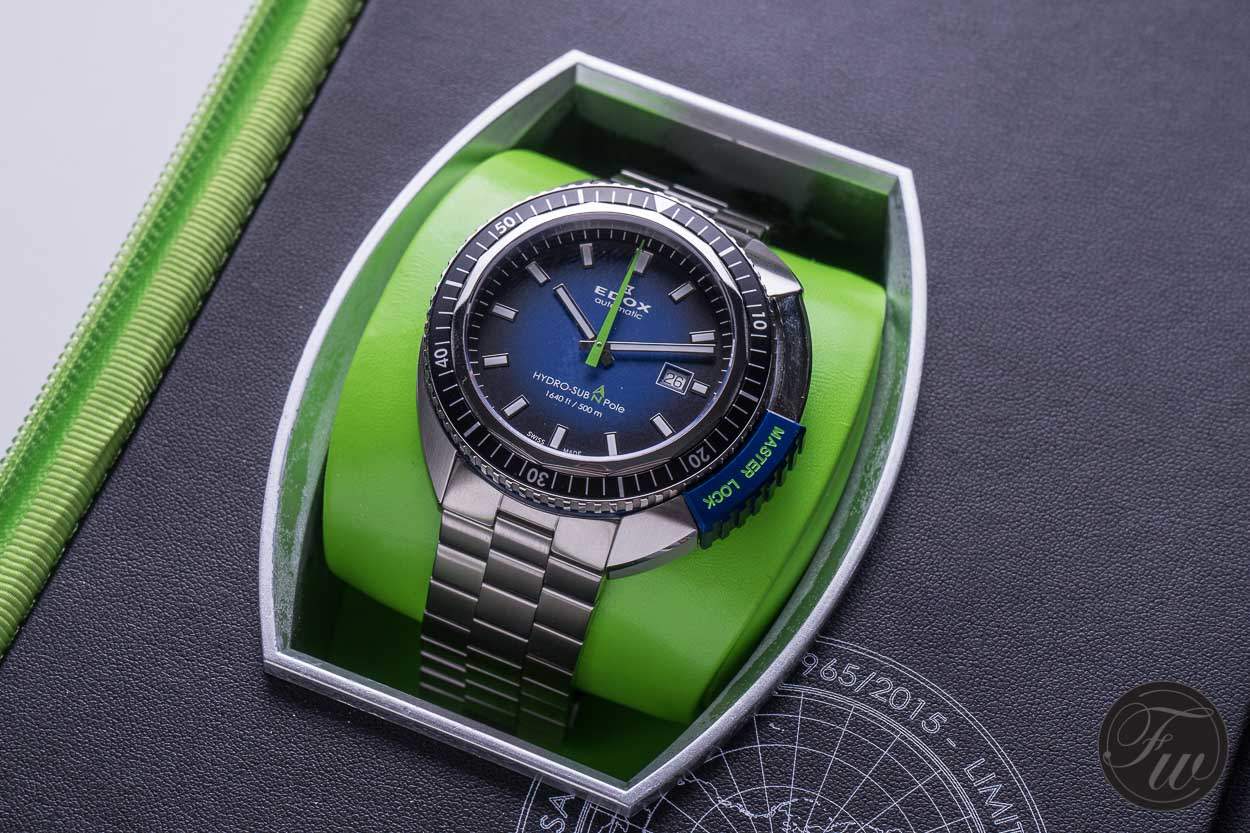 On the official website I find in their historical overview a similar Edox Hydro-Sub diver, dated 1963. However, this 2015 model commemorates the 1965 Edox Hydro-Sub and I couldn’t find an explanation for that 2 year gap. In any case, it is a limited edition of just 515 pieces only. Most of the time I don’t have much going on for limited editions, but I have to say that this Hydro-Sub comes very close to the original version of – let’s say – the 1960’s.

The Edox Hydro-Sub has the same ufo shaped (46mm) case, very typical for sports and dive watches from those years, and a very cool looking dial. A black and blue dial with a large green second hand. An amazingly nice looking combination on the wrist. Perhaps the feature you will notice right away on this watch, is the blue anodized slide on the right side of the case. It has ‘Master Lock’ engraved in the same green as the second hand and it basically protects the crown from getting damaged. You can slide it up and down with just little force. A nice little feature. The crown is screw-down to prevent water (and dust) from entering the case. See the two images below how it looks.

The N Pole (North Pole) on the dial refers to Austrian diver Christian Redl who did a free dive under the North Pole ice with, you’ve guessed it already, an Edox Hydro-Sub on his wrist. 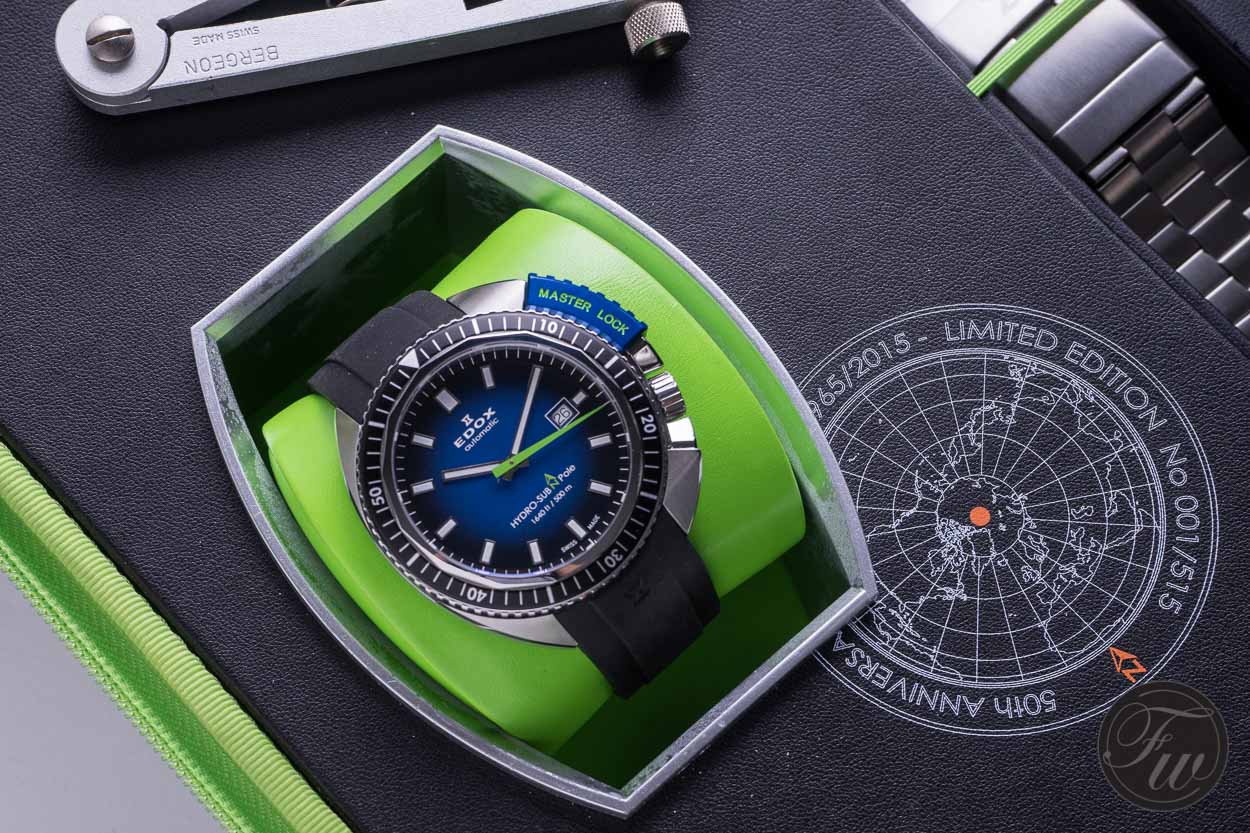 Just like the original 1960’s Edox Hydro-Sub, the 50th Anniversary edition has a water resistance of 500 meters (~50ATM). A serious divers watch is not complete without a uni-direction bezel, and you can ‘tick’ that one off as well with the Edox Hydro-Sub. I noticed the bezel has no play and feels very solidly made. Something I’ve seen differently with some other, more expensive, divers watches in the last few years. But more about the price tag of the Edox Hydro-Sub later on.

I’ve said it before and will say it again: I am not a fan of putting a transparent caseback just on any watch. Although I appreciate and love to watch mechanical movements in action, I’ve come to a point that I prefer to see a closed caseback when the movement is an off-the-shelf work-horse. I don’t want to sound snobby, but there is little joy for me in watching an ETA or Sellita movement at work. Perhaps if it were my only mechanical watch, I’d say otherwise, but for now I prefer the closed stainless steel caseback with very handsome engraving on this Edox Hydro-Sub.

As you can see below, Edox has the globe engraved on the caseback with a red dot indicating the North Pole. Furthermore it has all the necessary information engraved on there, like the serial number, case number, brand name and so on. The indication of the fact that this watch has a sapphire crystal is a bit too much for me personally, but it does fill up the space nicely. 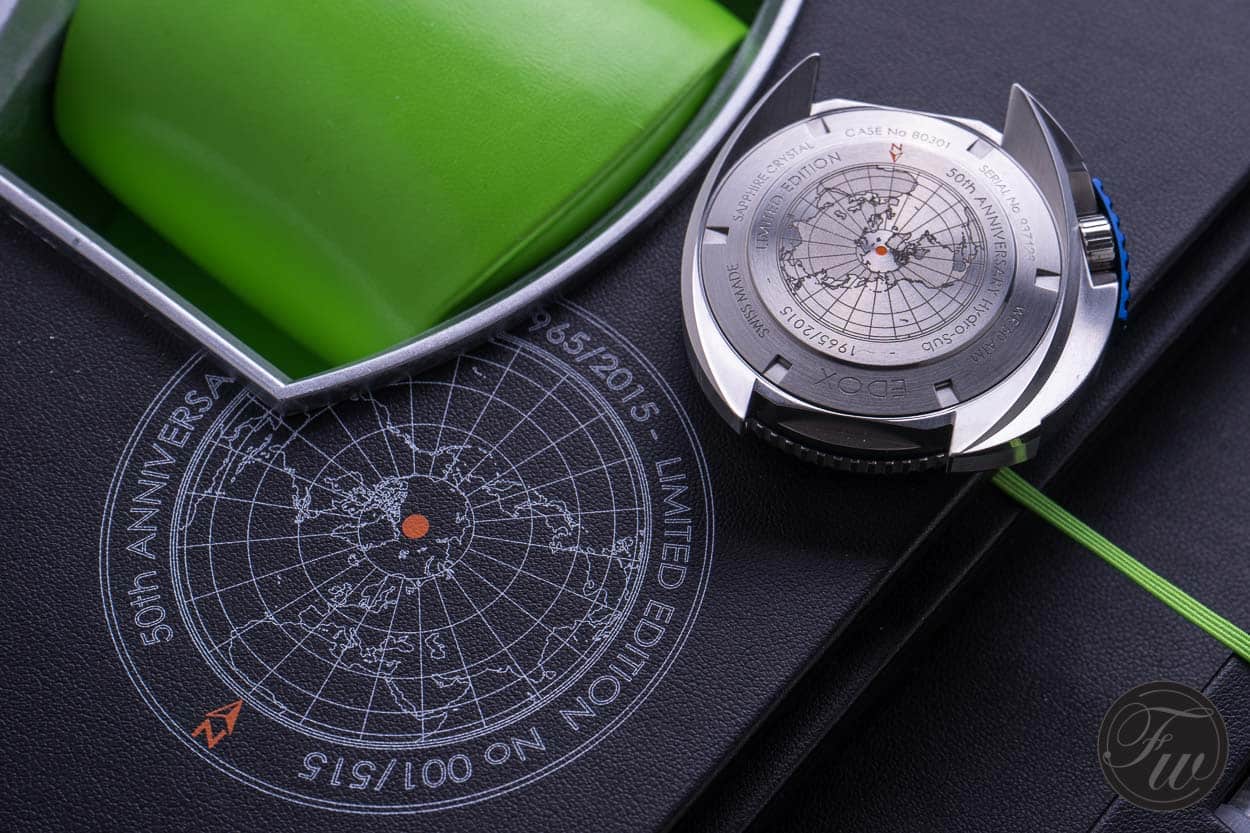 Underneath the nicely engraved caseback ticks a mechanical self-winding movement, as indicated on the dial. According to Edox, their caliber 80A ticks inside and is based on an ETA 2824 or a Sellita SW200. My guess is that they’ve used what was available for this watch and don’t make a distinction between these – otherwise very similar – movements. Personally I would prefer an ETA movement, but I guess choosing is no option between these two movement suppliers.

Either way, these are rock solid movements that are used in many other watches from many other watch brands. ETA being part of Swatch Group might give a hassle some times in the supplying outside the group, so perhaps that is why they also offer these Hydro-Sub watches with a Sellita movement.

As described above, the Edox Hydro-Sub 50th Anniversary Limited Edition comes with both a stainless steel bracelet as well as a rubber strap. Some other brands can learn from this, as you have to make a choice between either one of these and when you want to add the other later on, you feel the pain in your wallet. Edox did a smart thing and supply both options and that feels good. It is also nice to get some extras like this when you purchase a costly mechanical timepiece.

Let’s start with the stainless steel bracelet. The bracelet consists of three links in a row and comes with a brushed finish. The finish of the bracelet is nicely done and fits the overall look of the watch. A lot of bracelets these days use polished links or at least have some polished parts, this Edox bracelet luckily doesn’t have that. A tool watch like this Edox Hydro-Sub needs a subtle but solid bracelet, no need for polished center links or something similar. The design of the bracelet is very similar to the one Edox used in the 1960’s for their original Hydro-Sub watch. Kudos for being able to maintain the original style of the watch. The bracelet is very comfortable on the wrist and the folding clasp with extension and flip-lock will keep it in place, even when worn over a diving suit.

Also included in the package is a rubber strap with stainless steel folding clasp. Just like the clasp on the metal bracelet, you have to push two buttons to release it. A firm click can be heard when the clasp is being closed. The rubber strap is luckily not one of those cut-to-fit models, but just a regular rubber strap that will fit anyone. You can resize all you want. I have a couple of rubber straps that need to be cut correctly for the wearer, when you are selling the watch or ‘suddenly became bigger’ you might have an issue there. 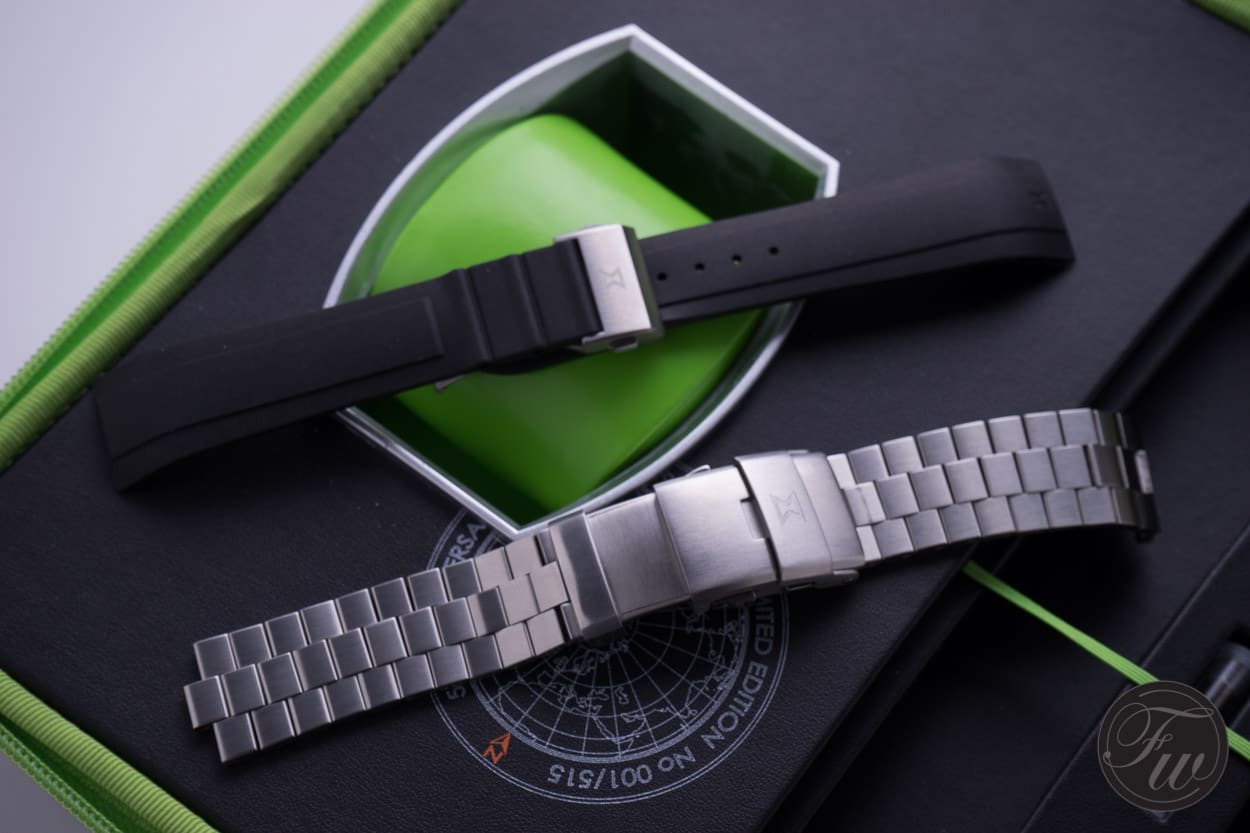 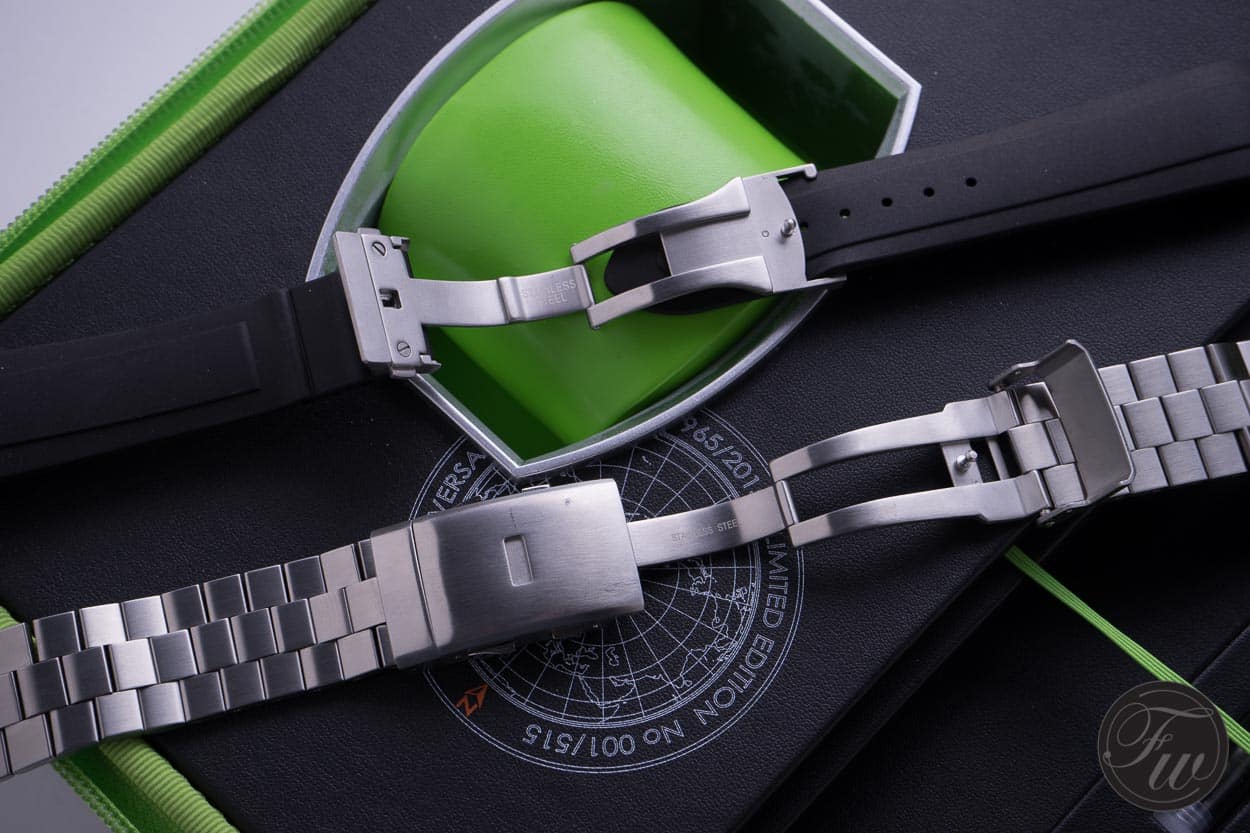 I didn’t discuss an important aspect of the Edox Hydro-Sub watch: the price. Although I saved it for last, I realize that it is – for many people out there – the most important aspect when it comes to buying a watch. Lately, I’ve become quite fed up with the price increases, and I am not talking about the cut of the Swiss Francs to the Euro currency here, but the annual increases brands introduce. Some brands even increased more than 10%, and that’s after we just became used to their 2014 price list compared to 2013. Some brands seem to be moving out of their ‘zone’, the price bracket they actually belong to: brands that offered interesting < 2000 USD/Euro watches, but are now way past that price range. It is not a bad thing per se when brands increase their prices, as long as they are justified and do deliver some value. One could say an in-house movement justifies a higher price, or the use of ceramics or something like that. But if nothing changed, only the price tag, then that is quite difficult to explain these days. 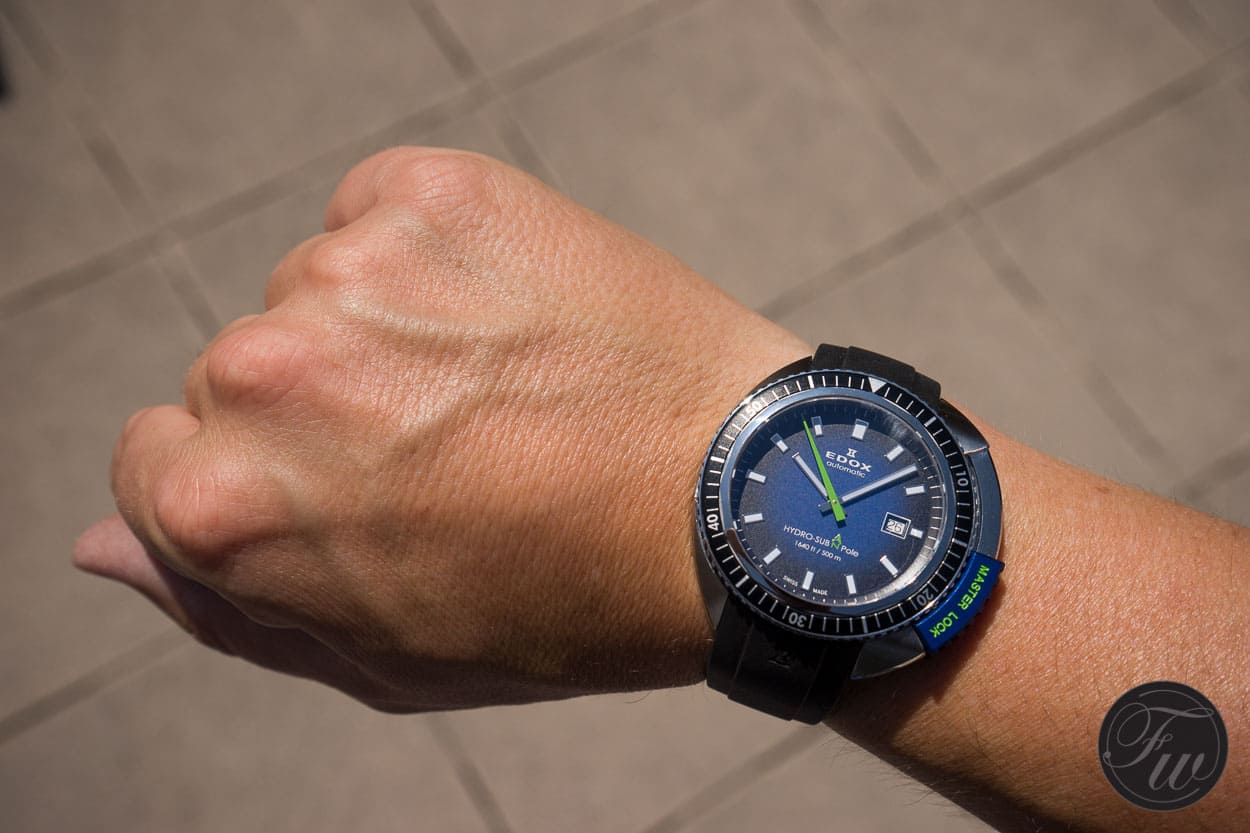 So, to cut a long story short, I was happy to learn that the list price of this Edox Hydro-Sub 50th Anniversary model is €1995,- Euro. While I do believe €1995,- Euro is a price range where there is a lot of competition from both big brand names as well as smaller brands (including a number of micro brands), Edox does offer quite an interesting and nice looking timepiece for that amount. Of course, you have to like the diver’s theme, but if so, you will get a watch with a nice retro design (and some real heritage as well), that has a 500 meters WR rate, a solid performing mechanical movement and a rubber strap and metal bracelet. The 46mm diameter is certainly not for everyone, but I found it to be quite wearable.

No cons regarding the Edox Hydro-Sub 50th Anniversary? If I have to name one: I didn’t warm up to the slide. The original 1960’s Hydro-Sub had a crown positioned at 3 o’clock, no crown guards or slide lock or whatsoever. I could have lived with that. However, I also know how peculiar some people can be when it comes to crowns and crown guards, so it is a nice solution you won’t see often elsewhere (or at all). So not really big cons or show stoppers at all. On the contrary.

From now on, if anyone is going to ask me what to look for when searching for a new divers watch with a budget up to €2000 – €2500 Euro, the Edox Hydro-Sub 50th Anniversary Limited Edition will be on the list of possible contesters.

More information can be found on the official Edox website.