Straight off the bat, I will be honest with you. I have a soft spot for Linde Werdelin. I have always loved Linde Werdelin’s concept of creating luxury sports watches for exploring the deep seas and the mountains. It’s not a revolutionary idea, but the execution makes it something very special. And after trying on a 3-Timer in late 2009 I was completely sold.

And that has never changed. The 3-Timer has always been “my watch”. But I still need to add a 3-Timer to my collection. Could it possibly be the new Linde Werdelin 3-Timer Nord?

It seems like a strange idea that a watch I have loved for over a decade, is still on my wishlist instead of on my wrist. The answer to that is simple; I just spent my money on other things when the first generation 3-Timer was around. But despite that, my love for the 3-Timer never faded. Neither did it for the initial brand concept of combining mechanical watches with digital instruments. 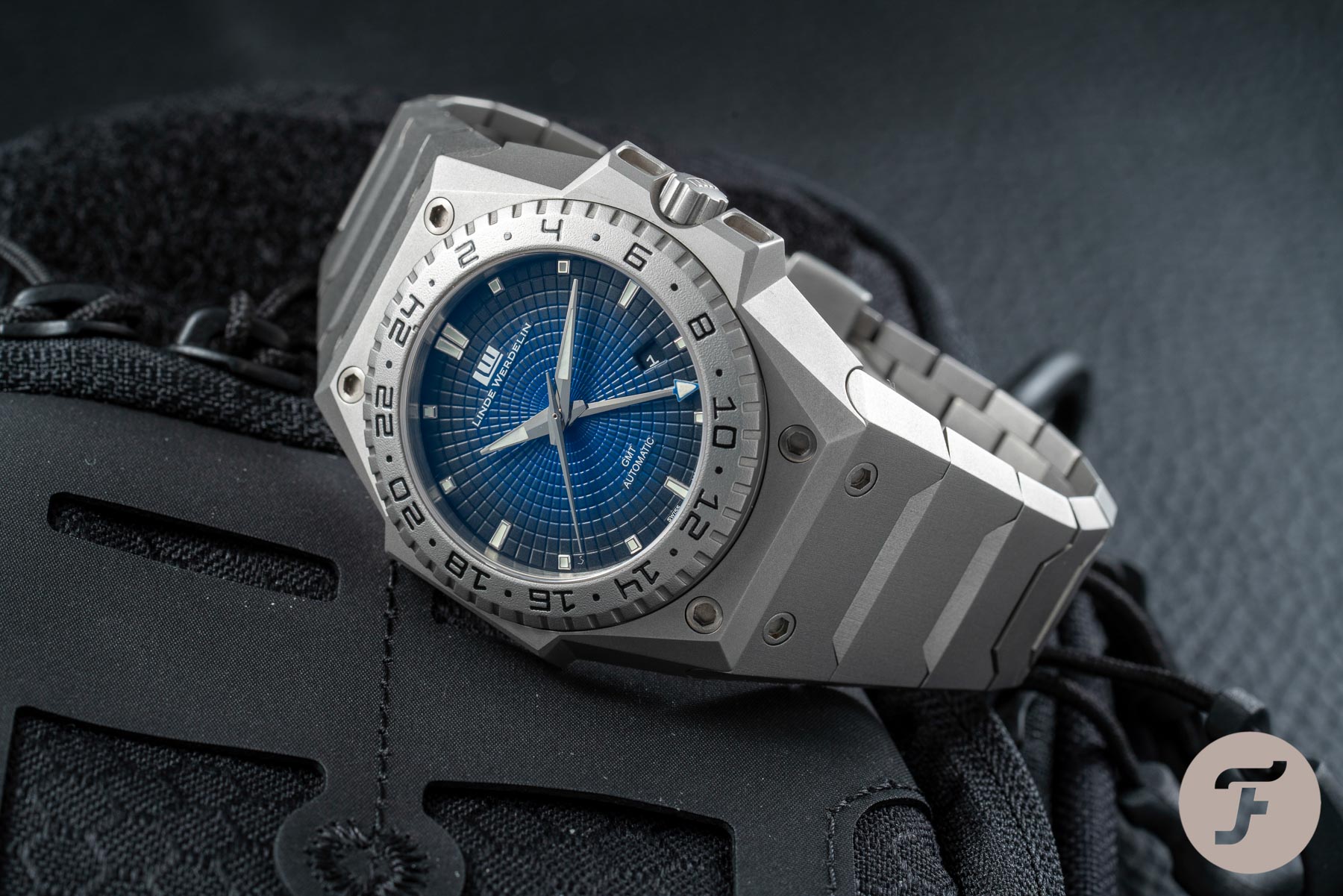 It’s an idea that was initiated by a functional desire Morten Linde and Jorn Werdelin had after Werdelin broke his back in a skiing accident in 1996. Ten years after the accident, the ideas became a reality with the first Linde Werdelin collection.

The idea of clicking a digital instrument — The Rock in the mountains and The Reef in the sea — on your wristwatch to provide vital information, had James Bond-like allure. Something Robert-Jan already addressed in 2008 in this article. Obviously, the digital world was hard to keep up with so the instruments became outdated rather quickly. But the idea of developing watches for exploring in extreme conditions was still very relevant. 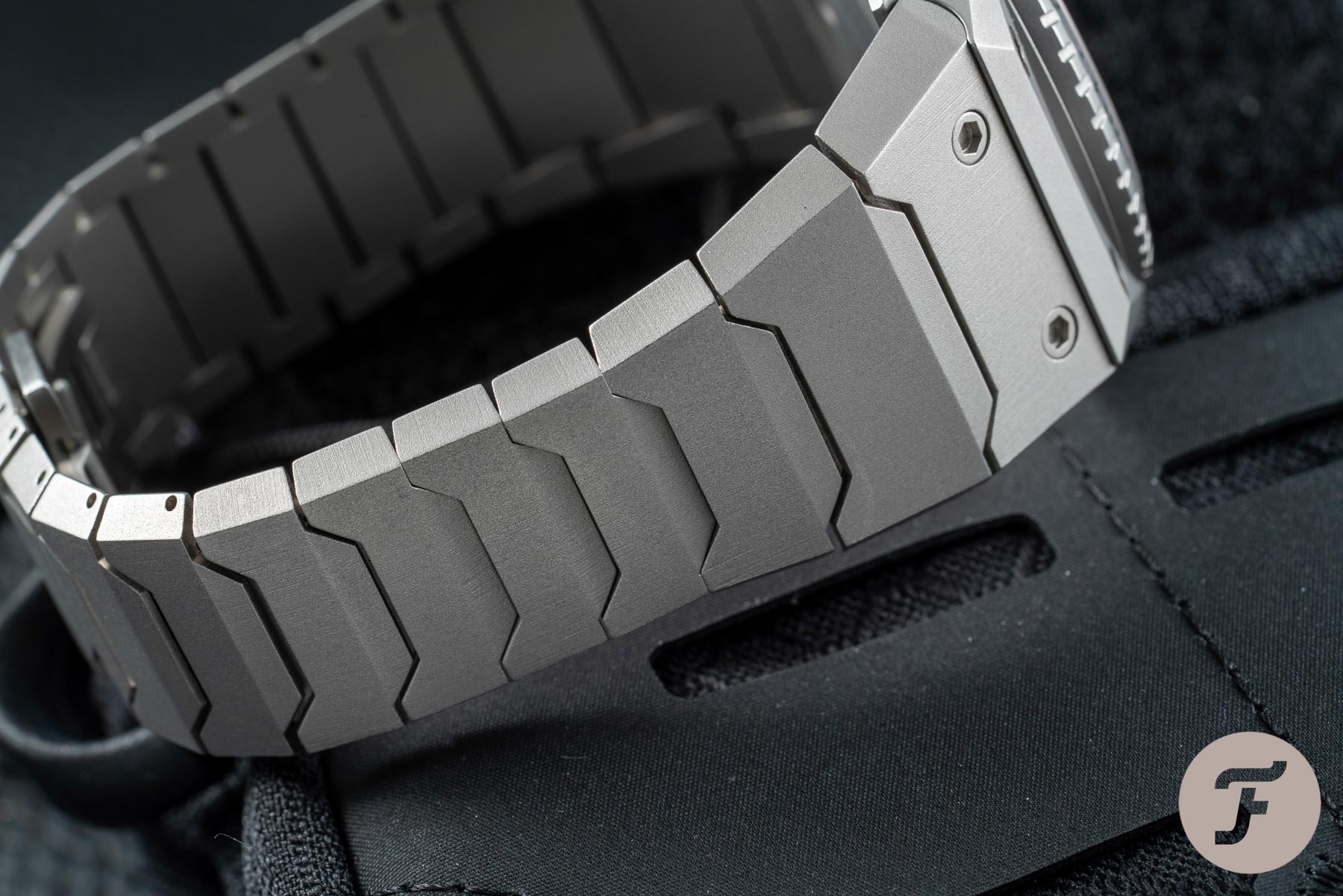 That’s why I was disappointed when Linde Werdelin lost its initial brand concept and wandered off into the land of bling for a while. It’s also when I lost interest a bit. I never lost my love for the brand’s approach to design or the initial idea though. Especially the 3-Timer and the Spidolite are still amongst my favorite modern sports watches. The return of the 3-Timer

I was incredibly happy to see the brand re-introduce the 3-Timer in 2017. And, with it, we also saw the return to the initial idea of Linde Werdelin developing instruments for explorers on land and in the water. It’s a return to form that has brought us some great timepieces.

The latest in the series is the Linde Werdelin 3-Timer Nord. It’s a special piece as it is the first 3-Timer after the re-introduction that comes on an integrated stainless steel bracelet. With modern luxury sports watches being as popular as ever, it was a good chance to find out if my love had changed for the 3-Timer. On top of that, I was able to check whether the 3-Timer is still a stand-out watch in a category overflowing with competitors. 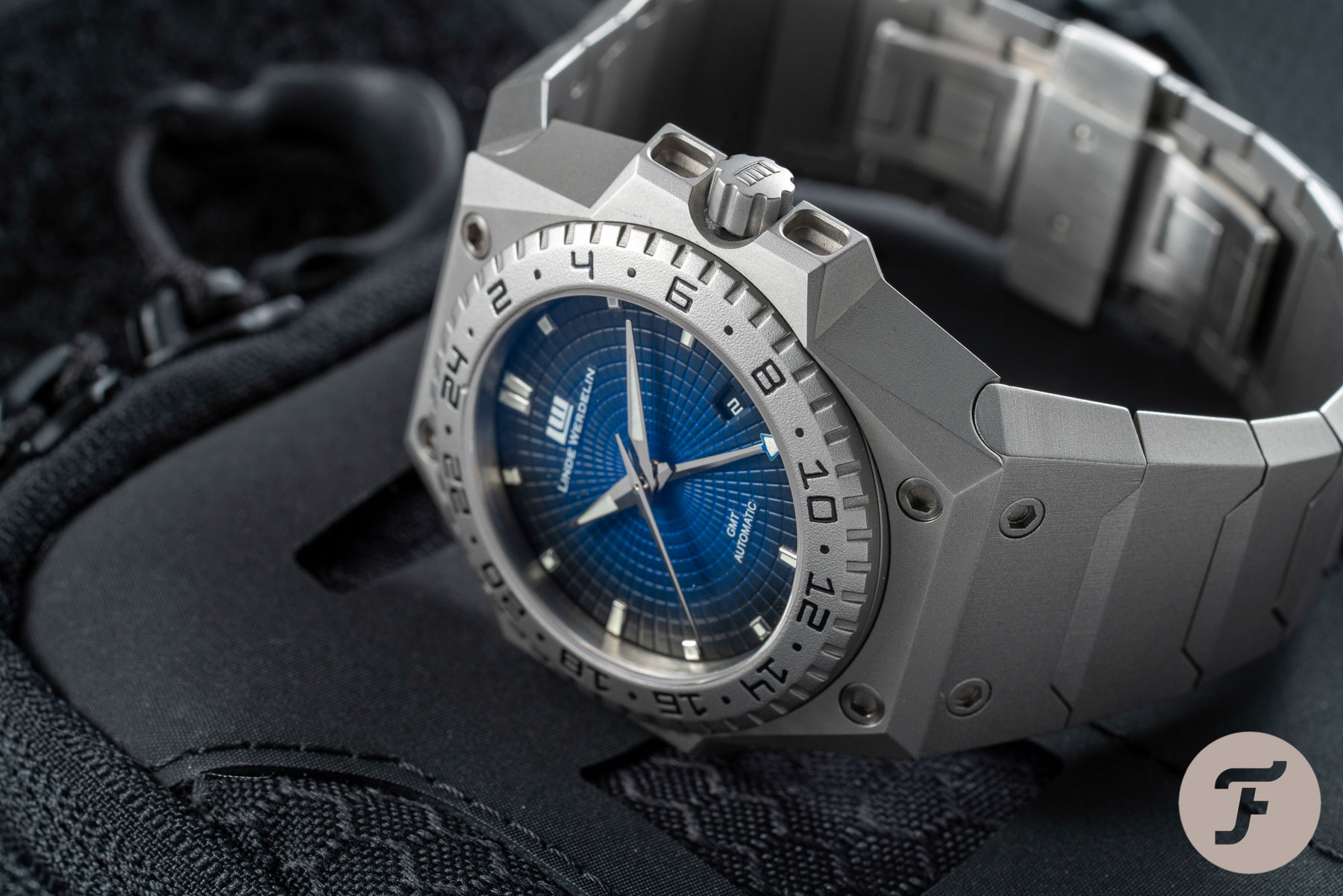 Straight out of the box, the first thing that stands out is the 3-Timer Nord’s presence. It has always been a watch that stands out both in design and in size. With its characteristic 44mm by 46mm case, this is by no means a small watch. Add the 15mm thickness and, in theory, you have a rather substantial chunk of steel on your wrist. And if you add the visual impact of the stainless steel bracelet and the 3-Timer Nord looks like something from a sci-fi movie. 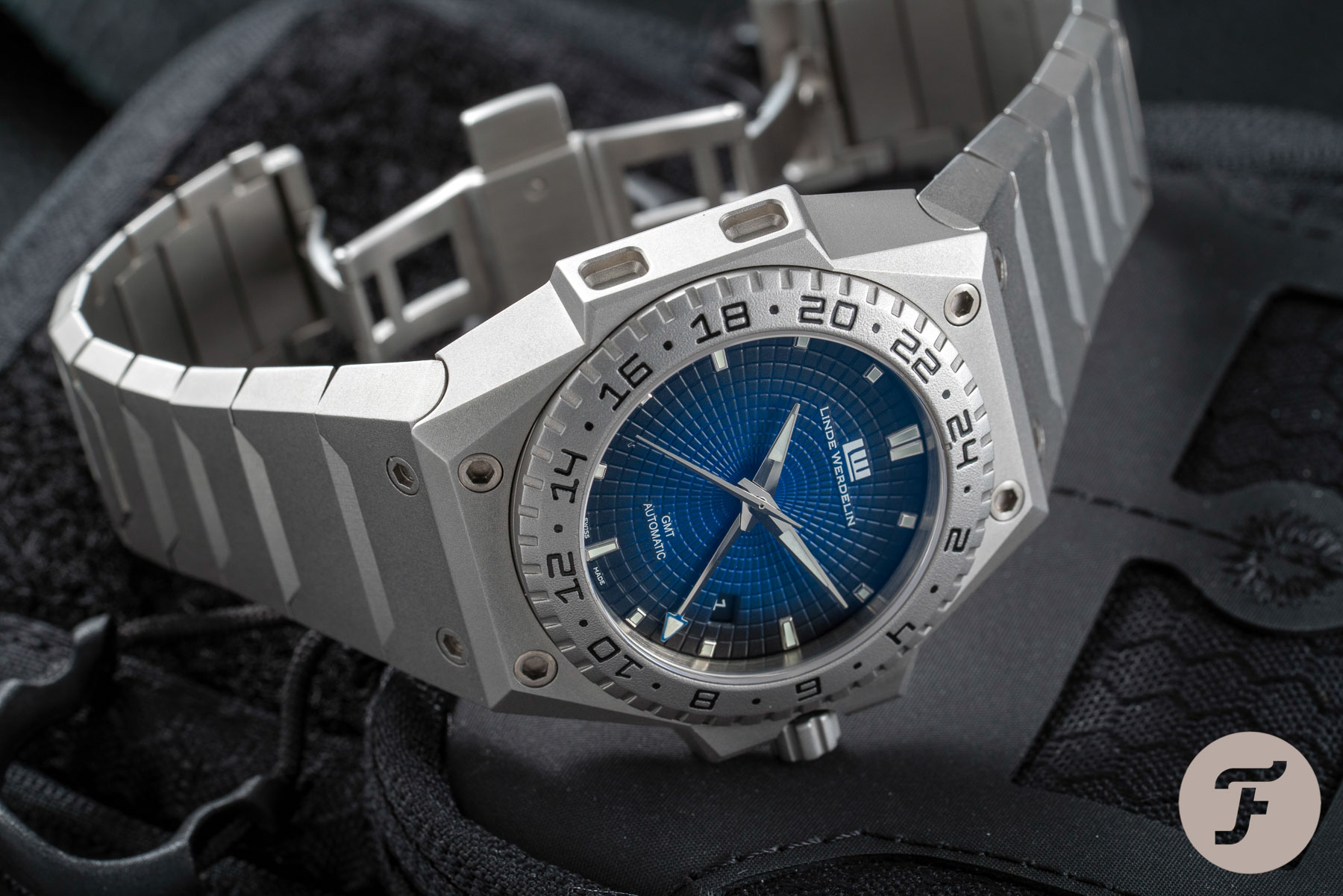 At the same time, there is also this feeling of familiarity. Upon first glance, I am immediately reminded of why I love the 3-Timer so much. That angular case design is still unique with its four characteristic bolts. The bezel looks humble with its 24-hour scale in that very recognizable modern font type. And the almost minimalist design approach creates space for the circular geometric pattern of the 3-Timer. With the small applied indices, small date indication, and sword style hands hovering above the dial, the pattern has plenty of room to shine. 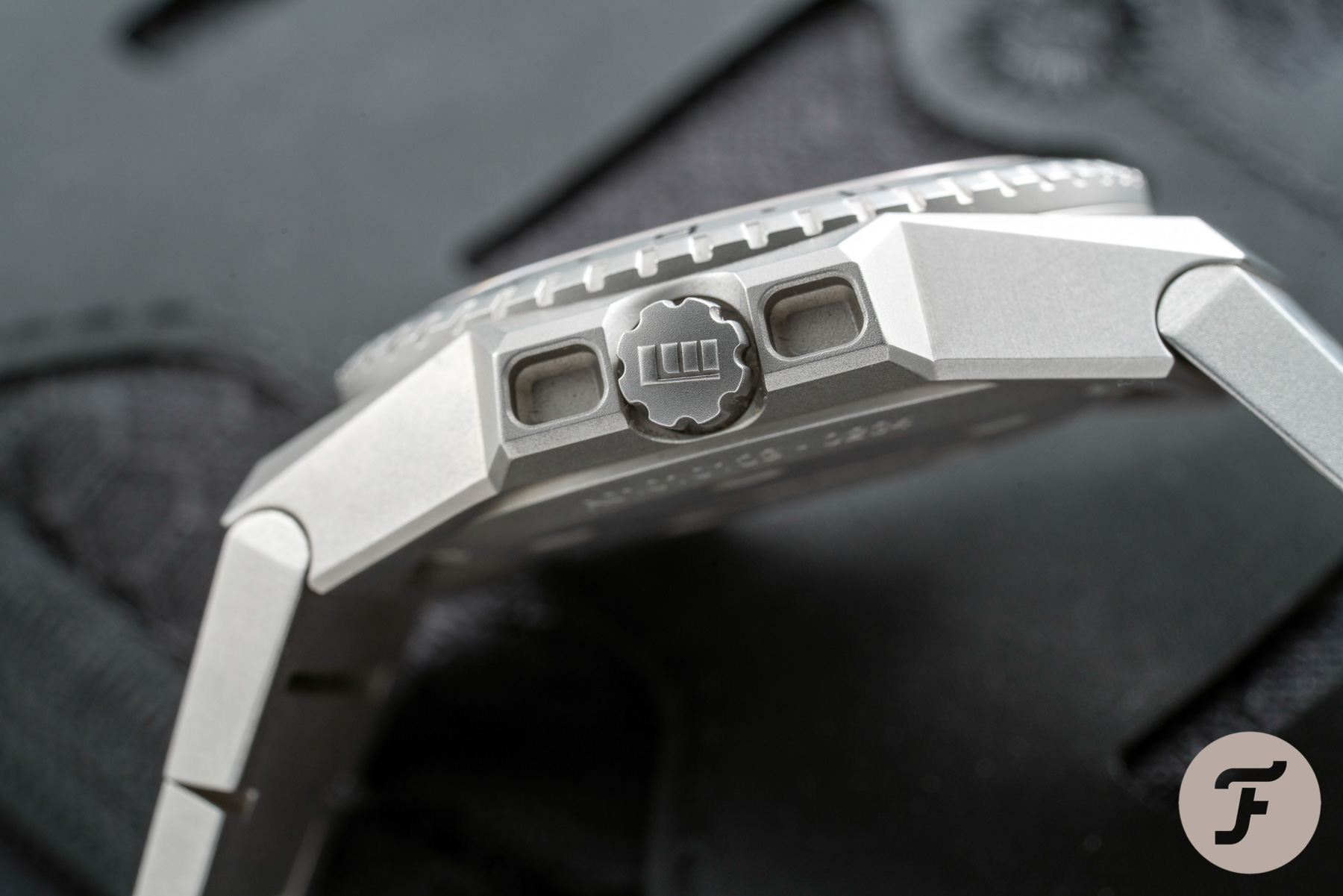 The clever design of the 3-Timer

The 3-Timer Nord is the first Linde Werdelin that features a fumé dial. In this case, it’s a blue fumé dial that starts out light in the middle and slowly changes into a very deep and dark blue color at the edges. The dial is inspired by the changing blue colors of the North Sea that is located in between England in the west and The Netherlands, Germany, Denmark, and Norway in the east. With the owner Jorn Werdelin being Danish and living in London in the United Kingdom, the inspiration can be traced back to the brand’s roots. 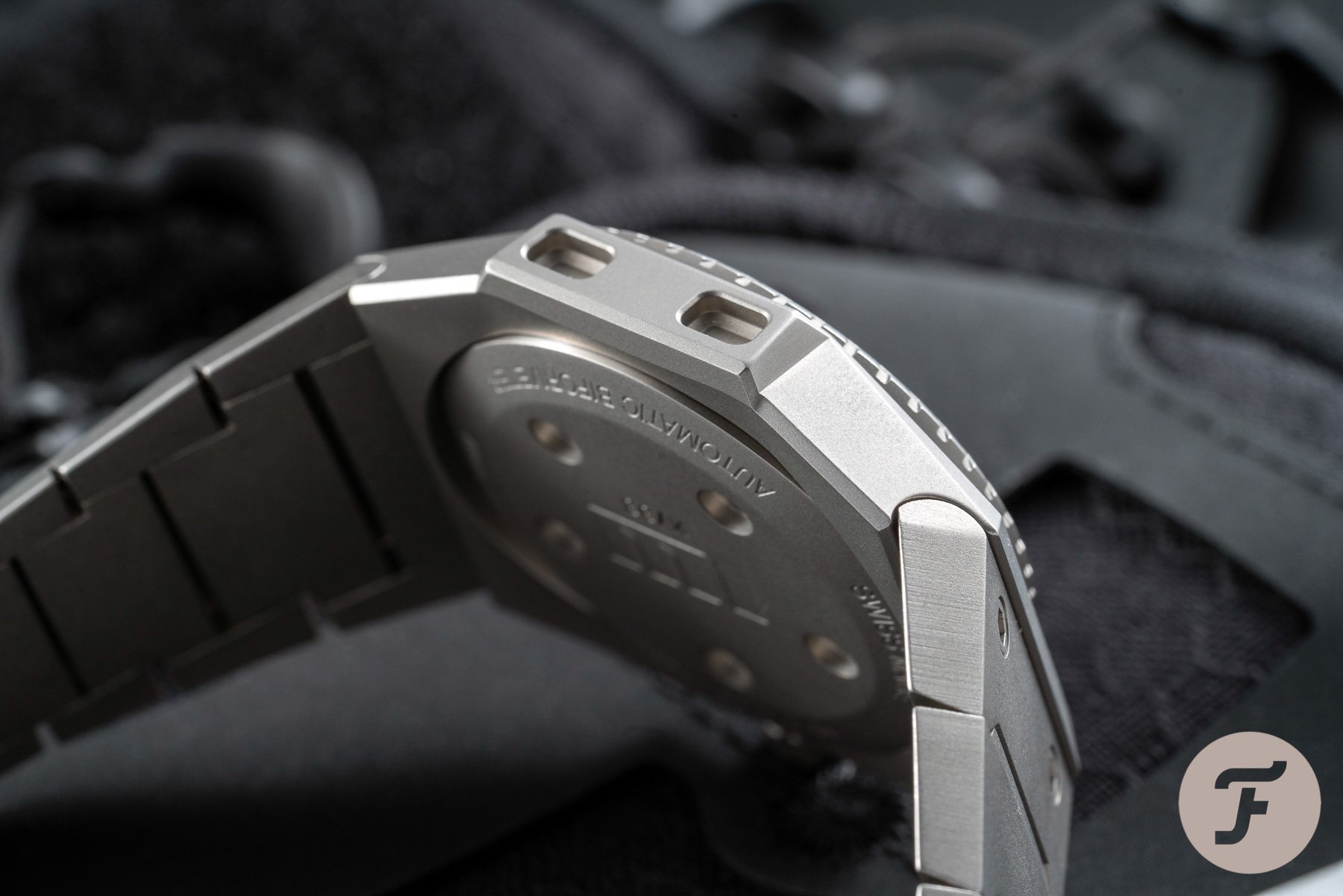 I have to be honest, I had to smile when I read about the inspiration for the color of the dial. It’s because Grand Seiko always seems to come up with the most amazing explanations for its dial colors. For quite a few models we have seen references to the wide array of colors in Japanese nature. Since this was a similar story, I paused for a chuckle.

The gradation of the dial is a nice change from the regular dials. The dial really comes to life in natural sunlight where you can really see the effect of the fumé dial. And the association I had (and really like) is that the combination of the changing blue color and the nautical map pattern. With a bit of imagination, it looks like you are looking at the map of the North Sea. 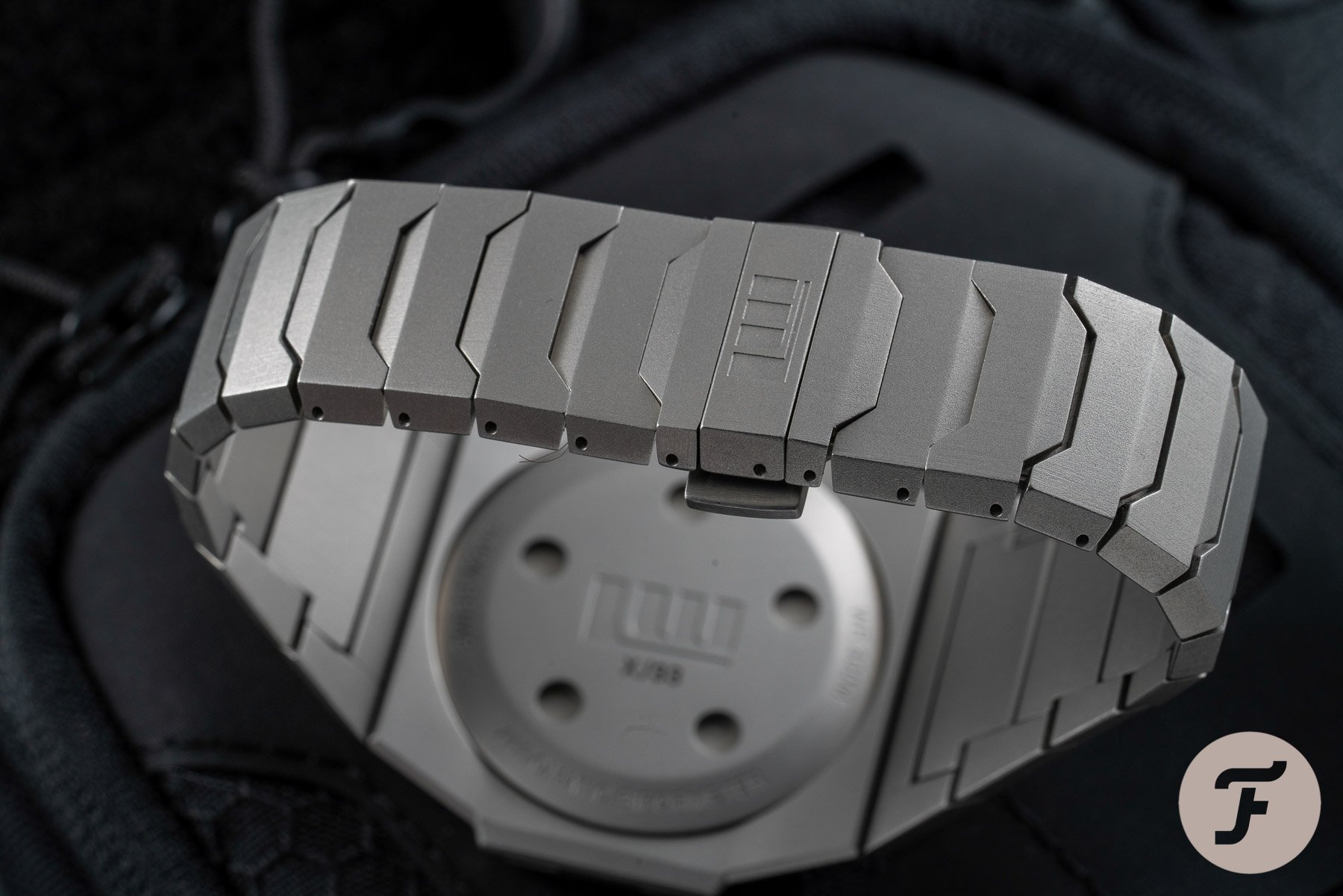 The biggest cause for comfort is obviously the bracelet. The single-link design bracelet does give the watch its futuristic overall looks. But as we have come to expect from Linde Werdelin the bracelet is also cleverly designed. If you turn the bracelet around, you will find a flat center link connecting all the outside single links that almost serve as an outer shell. 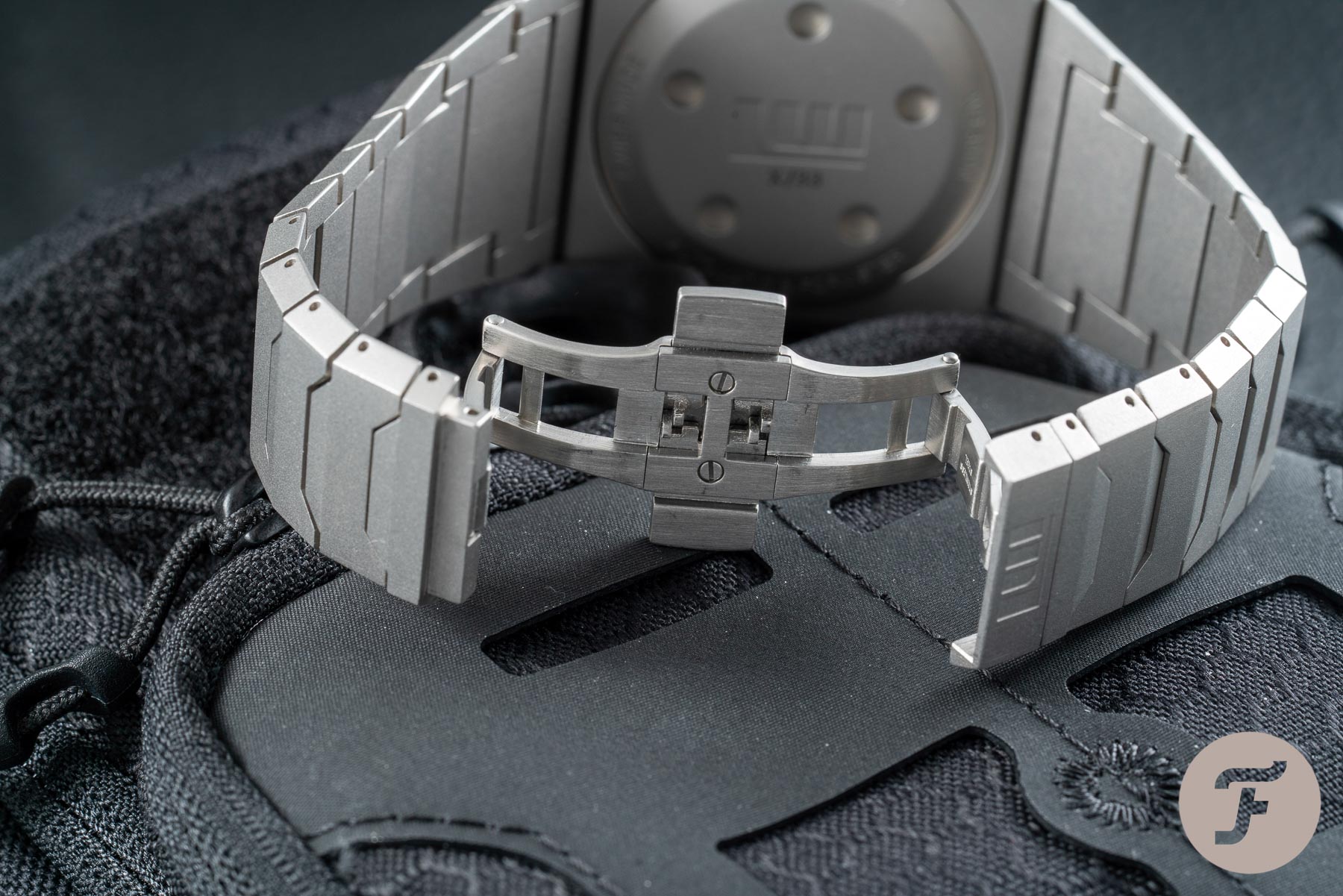 But what this clever design allows for is the room to move so the bracelet really hugs your wrist. I was pleasantly surprised how easy it was to wear the 3-Timer Nord. And another great feature is the butterfly clasp with a push-button release and the Linde Werdelin logo on top. When you close the clasp you feel how well designed and engineered all the elements are.

Adjusting the bracelet is easy with a total of seven short removable links making sure it fits different wrist sizes. And just like the rubber straps or textured calfskin straps we are used to seeing on a 3-Timer, the bracelet is connected to the case by the two big bolts recessed in the case. Overall I have to say — as with every Linde Werdelin watch — it all feels very well designed and engineered. Despite its futuristic machine-like looks, the bracelet is far from it. 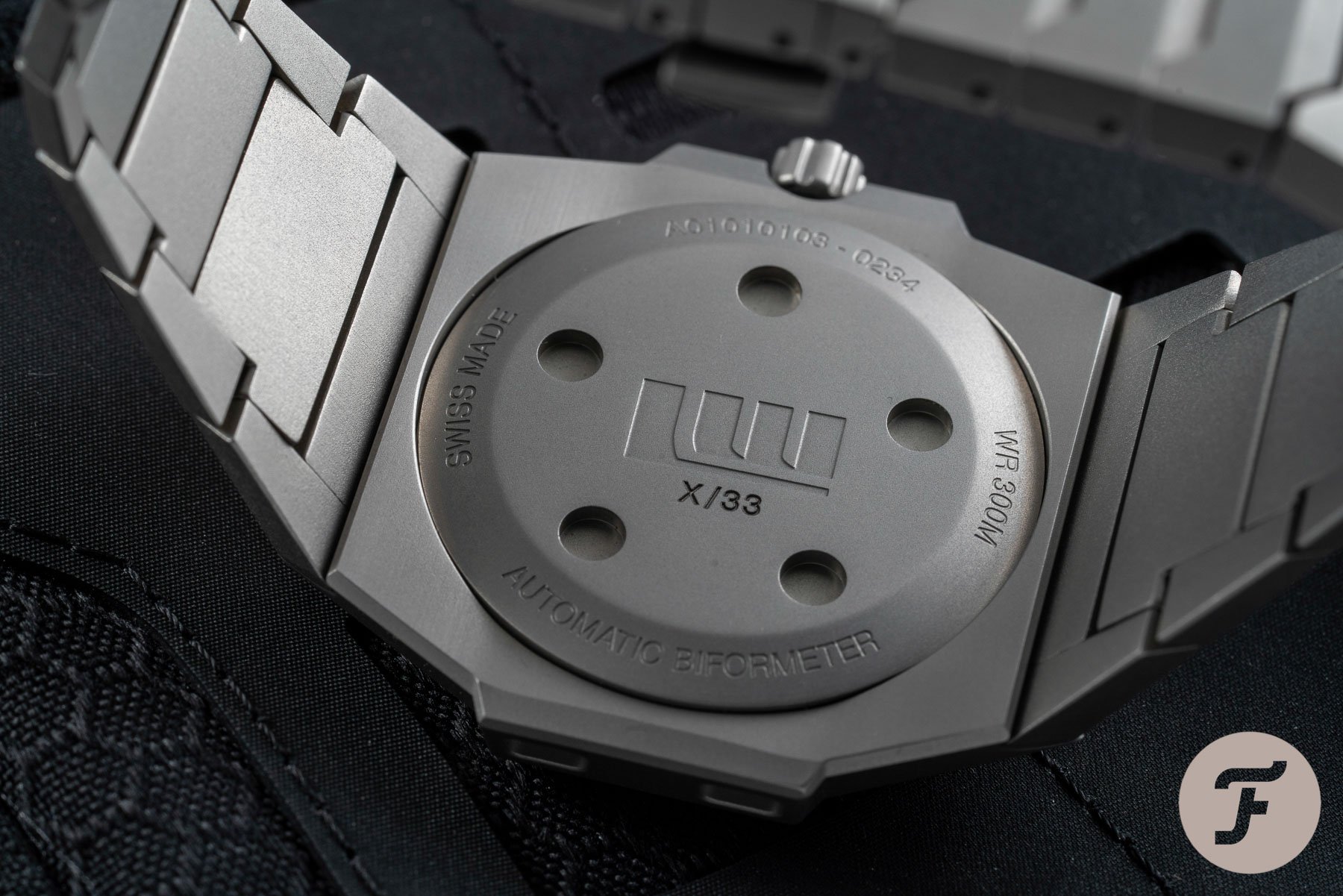 The Linde Werdelin 3-Timer Nord is powered by the well-known ETA 2893-2 movement. The 21-jewel movement ticks at 28,800vph and has a 42-hour power reserve. It’s a genuine GMT-movement with a 24-hour hand that can be set independently. Pulling out the crown to the first position and turning the crown clockwise will let you adjust/set the GMT hand in one-hour increments. Turning the crown counter-clockwise will let you set the date. Pulling out the crown to the second position will let you adjust/set the time. 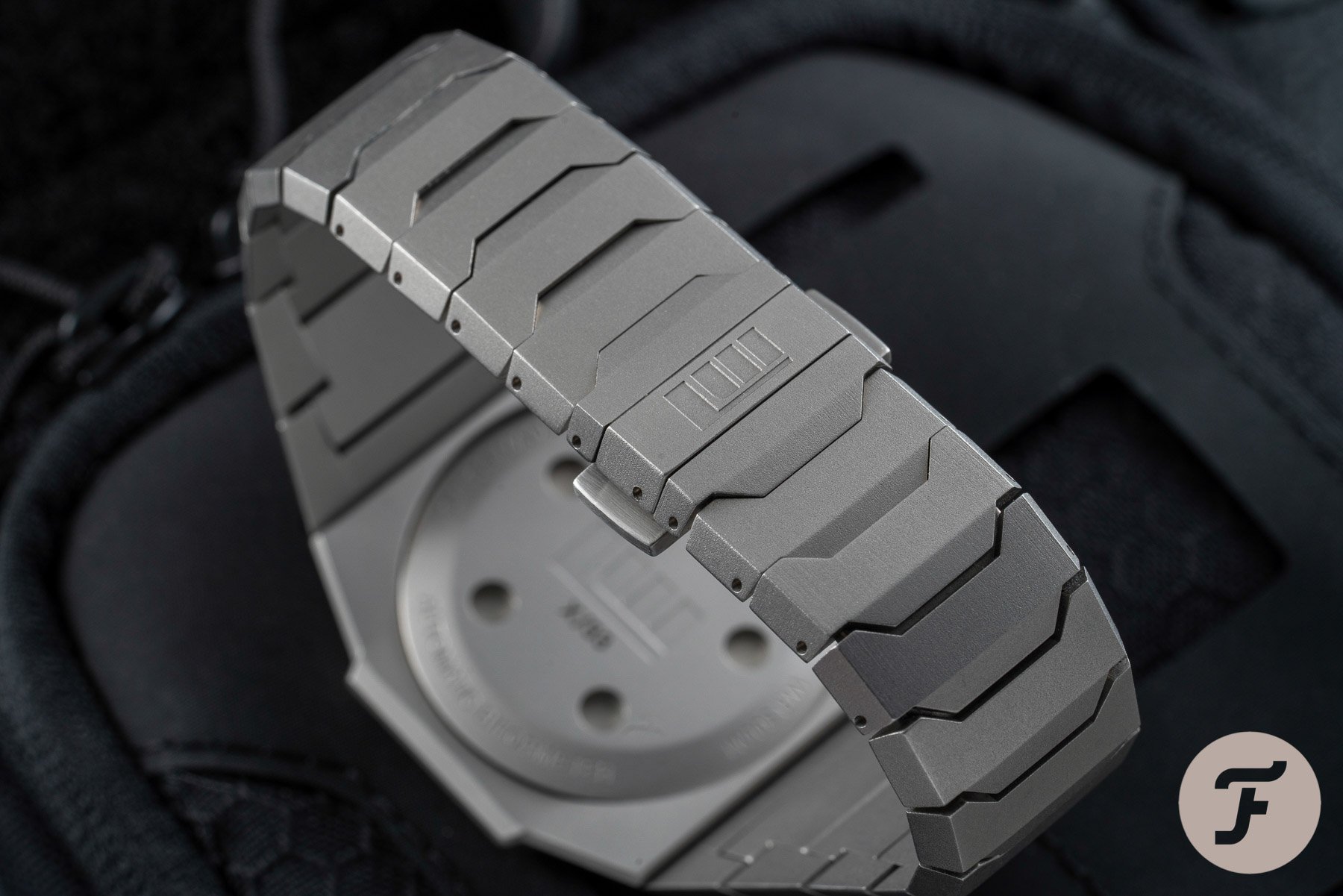 The movement of the 3-Timer has often been a point of much discussion in relation to the 3-Timer’s list price. The main reason for this is that the ETA 2893-2 is also used for watches with a less hefty price tag from Sinn, Hamilton, and Bell & Ross. And I must say that’s understandable.

With a price that’s just a little over €6,500, the 3-Timer Nord is not a cheap watch. And there are options out there in the same luxury sports watch category that offer a more impressive movement. One example is the Zenith Defy Classic with a titanium bracelet and in-house Zenith Elite 670 movement that Fratello’s own Gerard wears with great joy. But those looks! Does the movement in a closed-case-back sports watch really matter so much as long as it is reliable? At least, in the case of the LW 3-Timer, it’s easy to see where the money has been spent… 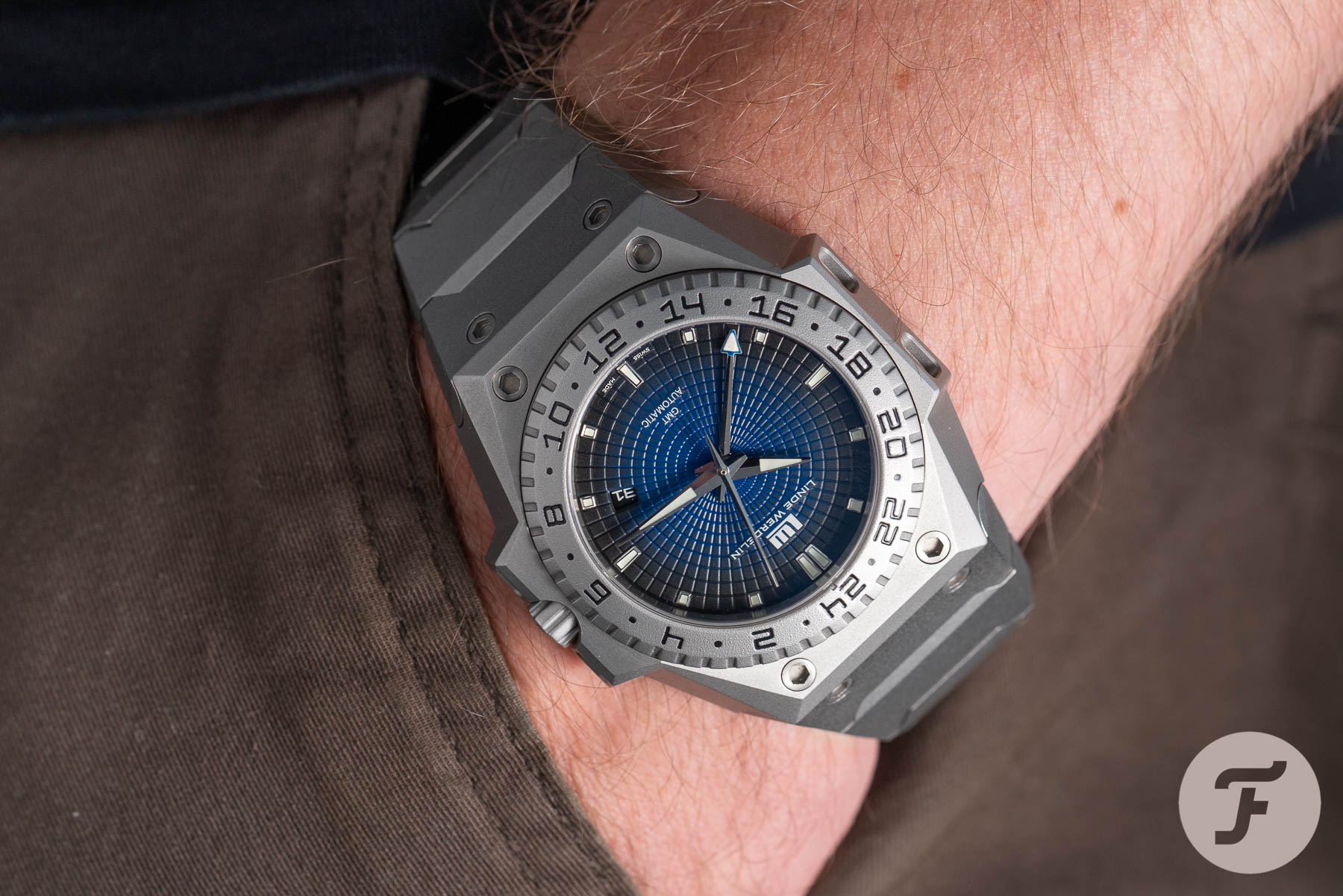 I must admit, I simply love the looks of the 3-Timer. Sometimes watches have to grow on you. However, with the 3-Timer the attraction has been magnetic from the start. And wearing the 3-Timer Nord once again confirmed that the love has not died down one bit.

Next to its good looks, I find that its size is perfect for my wrist. And despite it sounding like a big chunk of steel, the 3-Timer Nord wears incredibly well. The way the watch hugs your wrist is a testament to the impressive level of detail that went into designing and engineering the 3-Timer. 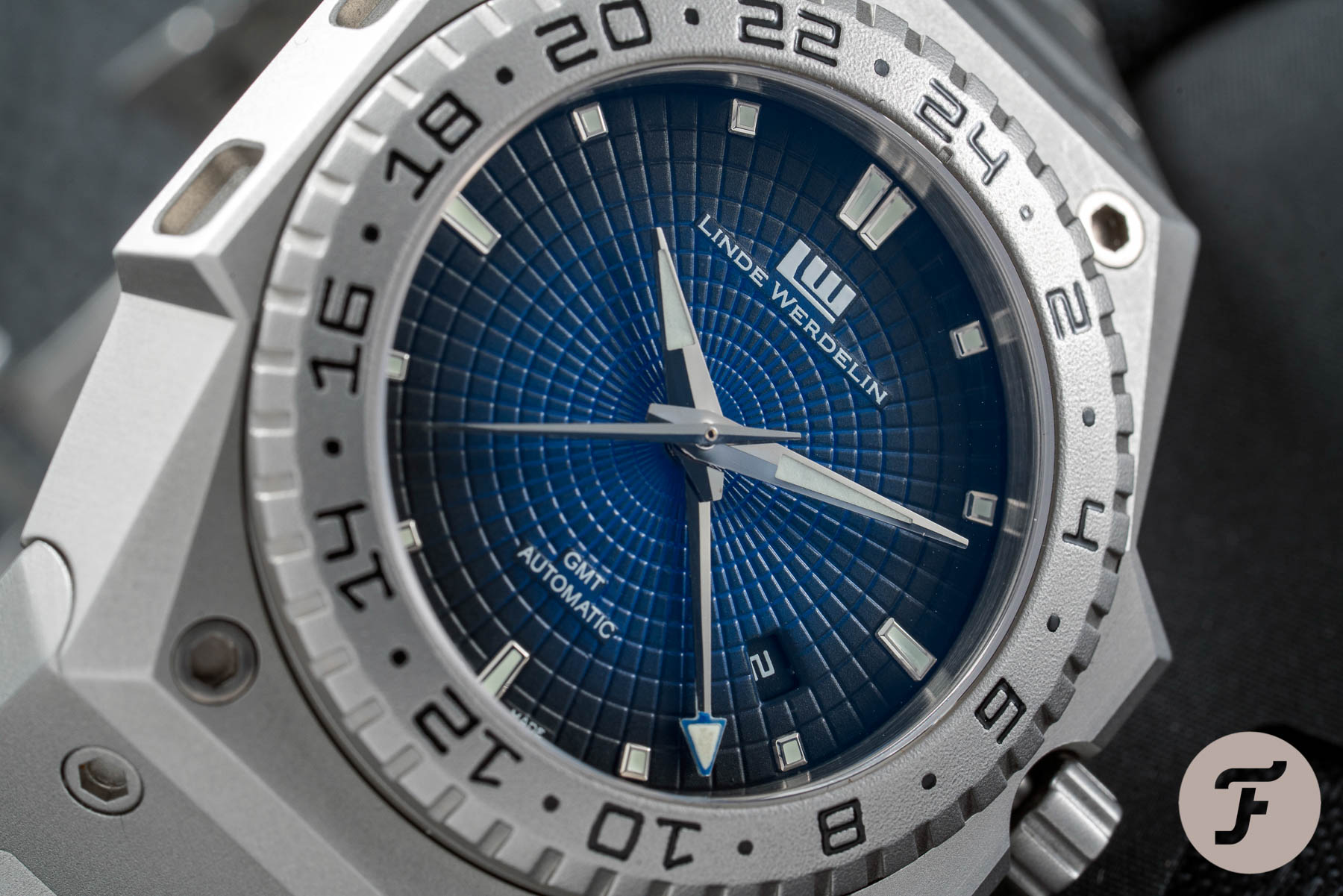 The one thing I would not choose, however, is the bracelet. I prefer seeing the 3-Timer on the rubber or textured calfskin strap it usually comes on. Yes, the bracelet is a great piece of engineering, but I am not drawn to its chunky machine-like looks. With a case design that’s already an incredible eye-catcher, the bracelet feels a bit like overkill. It makes the 3-Timer a watch from the future — it looks a bit cold and distant. Luckily you can also opt for the watch on a blue rubber strap.

If anything the 3-Timer Nord proves that the watch has not lost any of its relevance and design power. Sure, you can debate its price and its movement. And if that’s the reason for you not to want one, I get that. But my attraction to the watch is rooted so deep, there is no turning back. It will result in me having to pull the trigger eventually. Whether it will be Linde Werdelin 3-Timer Nord or something else from the brand remains the only question mark.

Hot Topics
Introducing: The Omega Speedmaster Super Racing With Spirate System
165 comments
Design Vs. Specs — Which Is More Important To You When Buying A Watch?
87 comments
New Release: The Limited-Edition Seiko Prospex SLA067J1 Diver
59 comments
My Predictions For New Omega Speedmasters In 2023
57 comments
The Time To Buy Is Now: How The Current Economic Climate Influences Watch Buying And How You Should React
51 comments
Popular
A Question From A Reader: “Which Modern Speedmaster Is Closest To The Original Moonwatch?”
Robert-Jan Broer
14
Top 10 Rolex Watches – Overview of Models Favoured By Our Readers
Fratello
25
Speedy Tuesday – Omega Speedmaster Professional 145.022 Buyer’s Guide Part 1
Robert-Jan Broer
14