When the watch brand from Biel dropped a new small-seconds version of the Aqua Terra, I wasn’t sure what to make of it. The central-seconds model appears better balanced and therefore remained the superior and preferable “AT”, in my opinion. But when Jorg and I went through the extensive AT collection online, we spotted something interesting. Something different. Something that got us very curious. Amidst a sea of black, blue, and gray dials, the reference 220.12.41.21.02.005 caught our eye. That’s the 41mm steel AT featuring a silver dial with beige detailing and a matching beige rubber strap. We had to see that watch in the metal, so we asked Omega to send it over. That wasn’t a problem, and that’s why I could go hands-on with the Omega Seamaster Aqua Terra Small Seconds in a surprising color scheme that proved even better in real life.

The new Omega Seamaster Aqua Terra 150M Co-Axial Master Chronometer 41 and 38mm watches — this is the first and the last time I will use the full name — are the first AT models featuring small seconds. But they’re not the first Seamasters with that dial configuration. Remember the Seamaster 1948 Limited Edition? Anyway, that 38mm retrospective model doesn’t take away the fact that a Seamaster Aqua Terra with small seconds is a first. But being first is not always best. A 41mm AT with a radiant blue dial and its characteristic teak motif looks better when that horizontal, nautically inspired pattern is not interrupted by a sub-dial. And to be honest, the same goes for all the other colors of the 38 and 41mm versions of the AT Small Seconds. But there is one model that is both very different and intriguing. 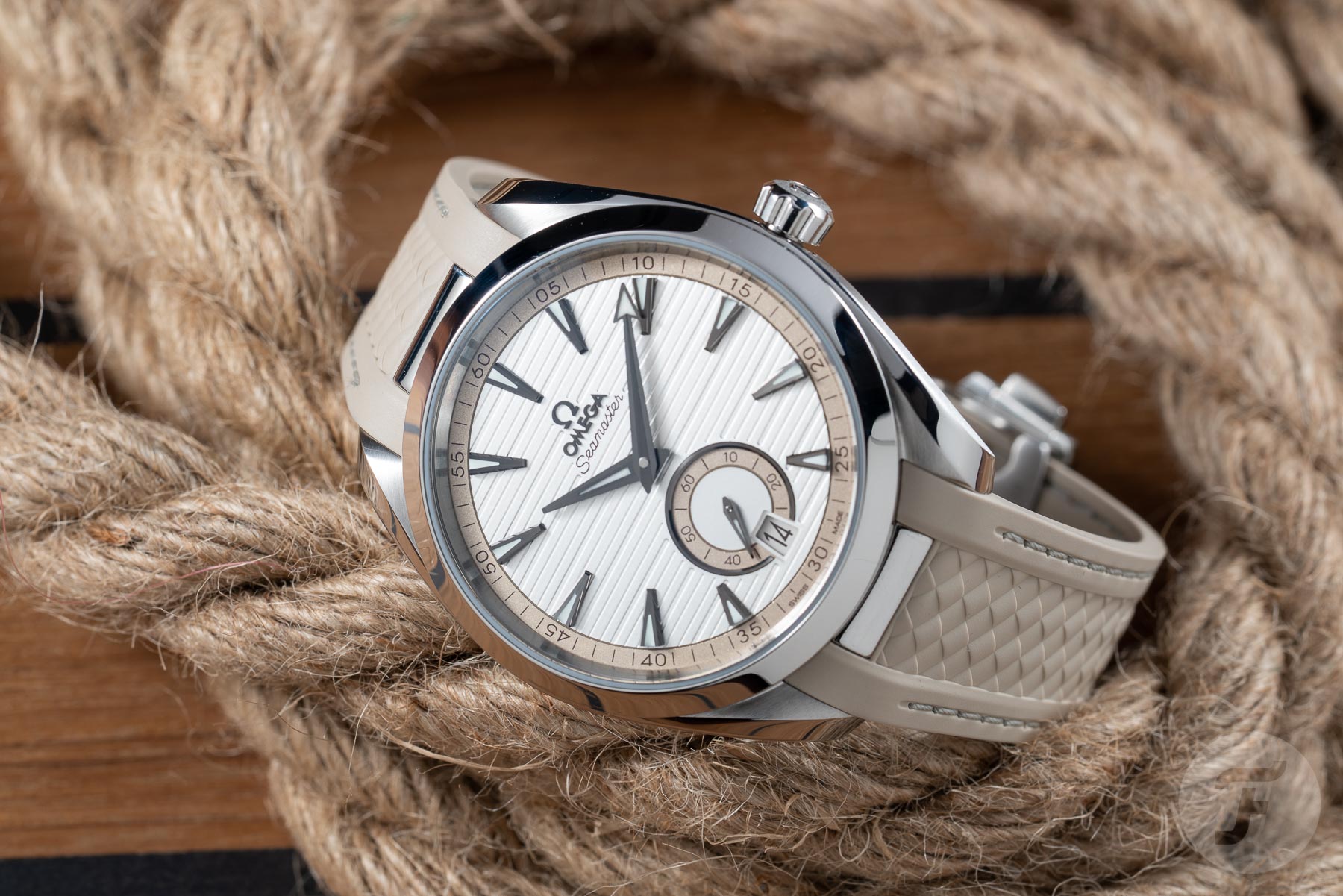 When I unboxed the beige Omega Seamaster Aqua Terra Small Seconds, I didn’t hold it in my hand for too long to get a first impression. I immediately sized the rubber strap outfitted with a folding clasp — a very simple and quick task — and put it on. “Why so hastily?” you might ask. Well, that’s because I think the first impression you get from a watch should be in the timepiece’s most favorable setting. As I often experience, big and bold complications with a lot of visual fireworks often work better off the wrist than on it. But when you’re dealing with a much more simple creation in soft colors, it will only come to life on the wrist. And as soon as the new AT sat on my wrist, it said “hello” in the most charming and enchanting way. 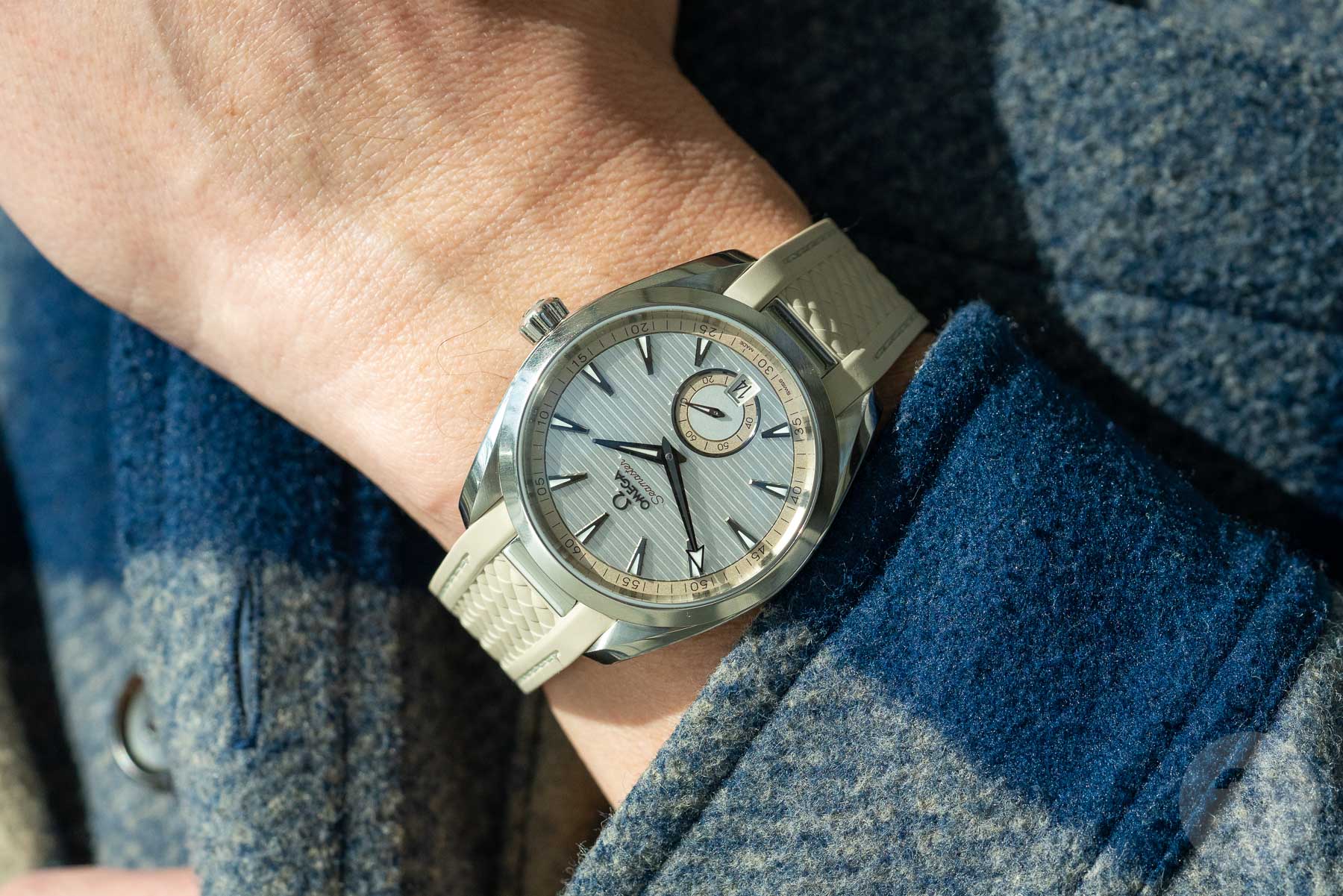 Love at first sight? Well, I saw a picture of the watch on Omega’s website, so not exactly, but the AT in the metal is something else altogether. Too much Photoshop is never a good thing — not on dating sites and not on watch-brand sites — since it polishes out nuance and character. The watch on my wrist is a completely different creature than its picture/rendering online. That’s what I hoped for, and that’s what I got. A very nuanced and subtle watch with a dial that is stunning in an introverted way. The brushed, silvery-beige dial shows the familiar horizontal teak pattern, as well as a date window at 6 o’clock. The date is semi-integrated into the opaline small seconds sub-dial, which is surrounded by a blackened ring for a crisp contrast. 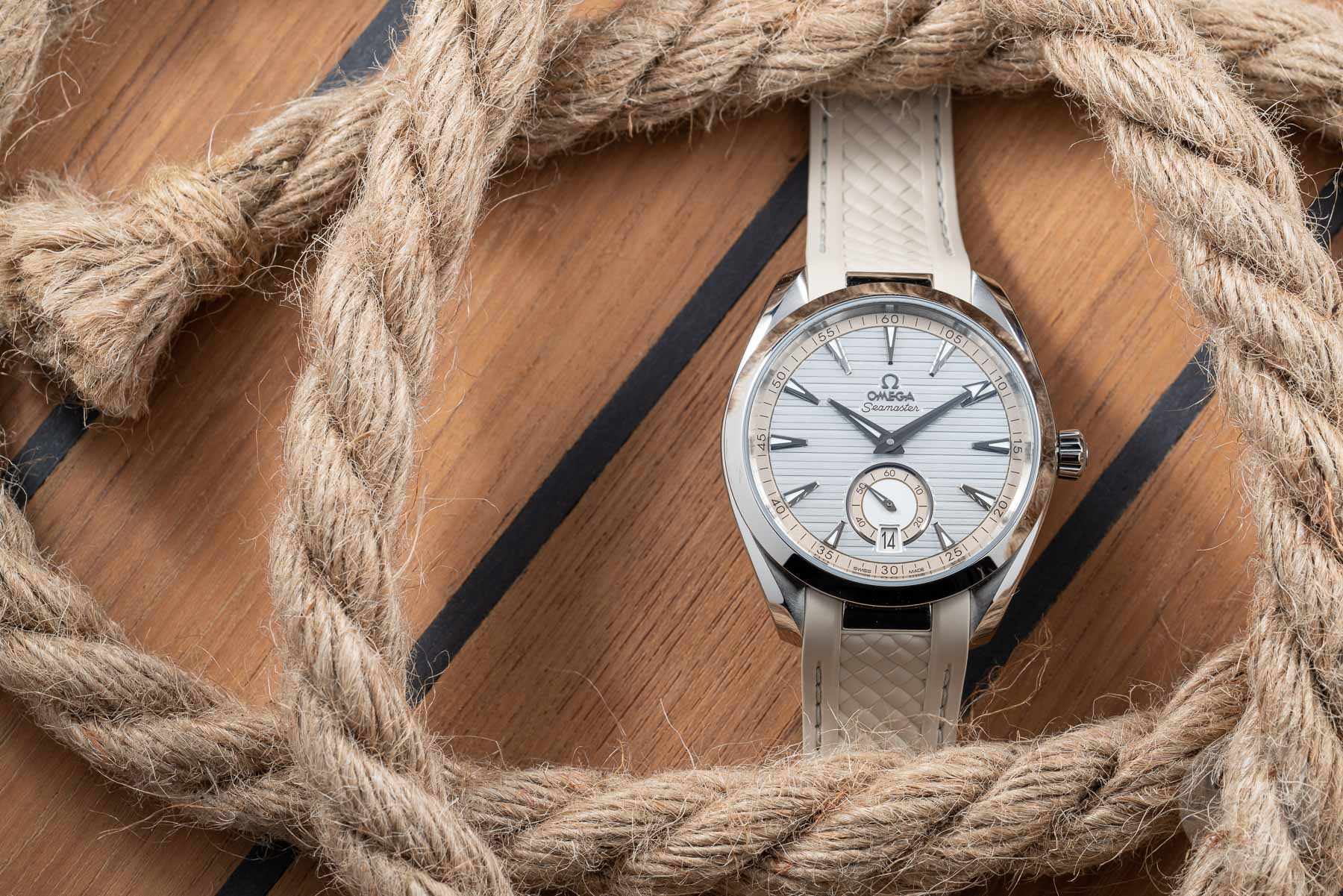 Omega also opted for blackened hands and indexes filled with white Super-LumiNova for both visual hold and easy legibility. Whereas the black brings strong contrast, the sandblasted minutes and seconds tracks on both the dial and sub-dial have a sophisticated nature. 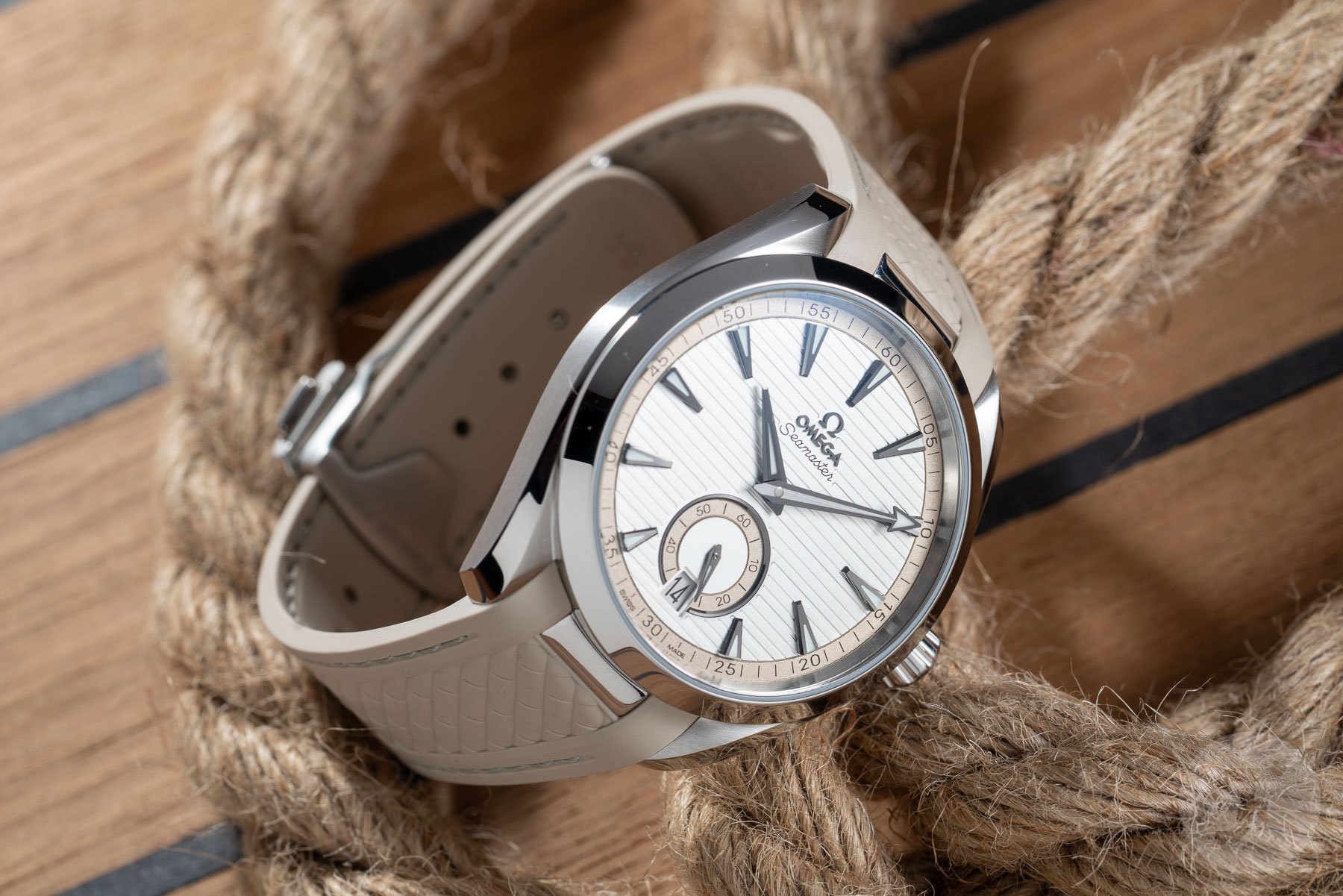 The black and beige prove to be a wonderful combination, one that’s not too prominent and also not too bland. And this dial, which charms me so much, is the result of thoughtful, creative decisions as well as engineering. The use of a laser to engrave the pattern on the dial is the reason the beige AT shows so much personality and depth. I know the sub-dial is a subject of debate, and so is the date window. Some people can’t stand them. I’m not too dogmatic on the subject. I don’t miss the date on my Chronoswiss Timemaster or quartz-powered Grand Seiko because a date window would ruin the clean look. But in the case of this particular AT, the rather large and prominently shaped date window doesn’t distract. The date, which you can’t see separately from the sub-dial, adds body to the subdued dial color. 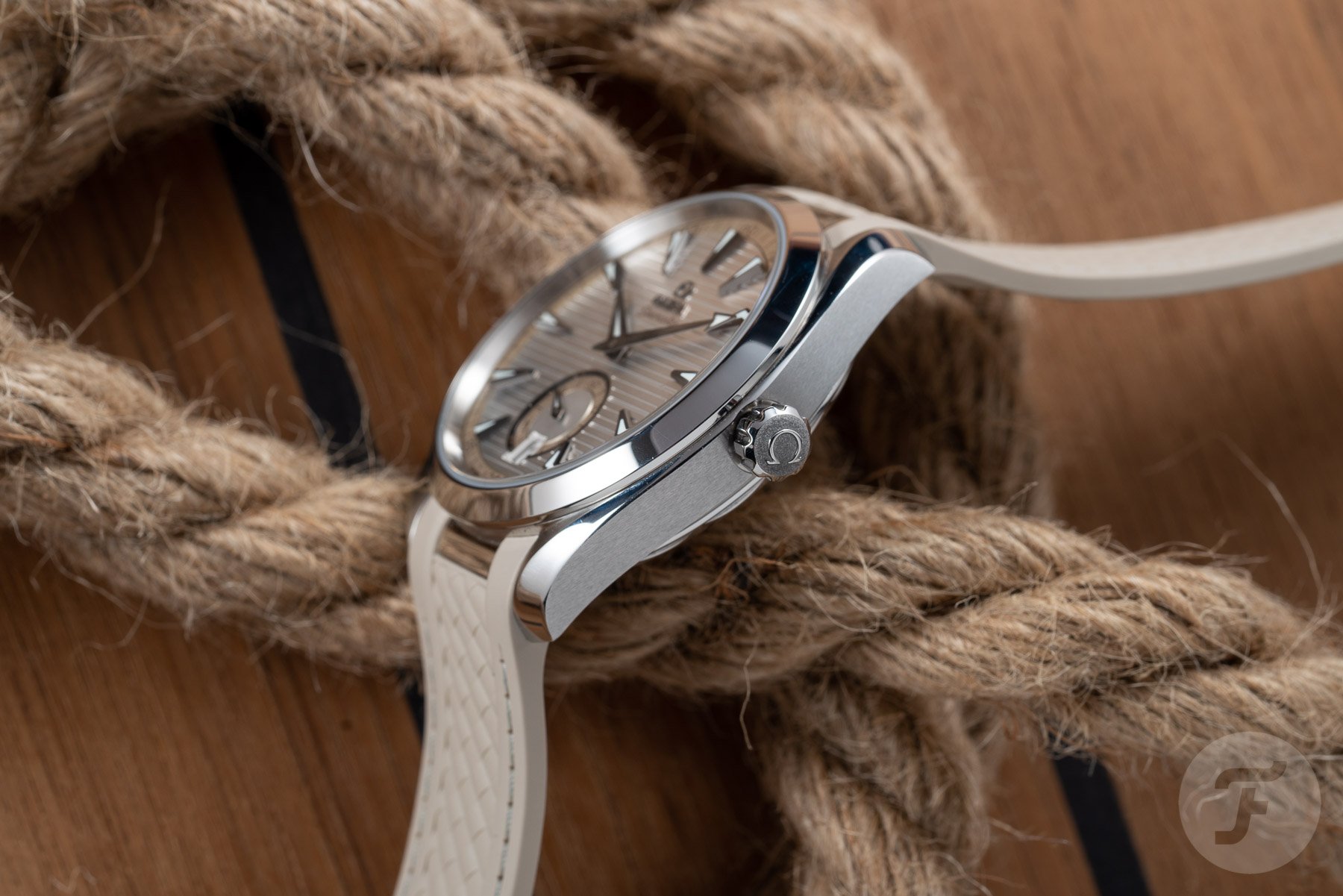 Not something you notice at once, but only after looking at the watch on your wrist countless times and comparing it to the AT with central seconds, is the absence of the words “Co-Axial Master Chronometer” on the dial. It’s a case of “kill your darlings” maybe, but the sacrifice works well. Too much text would mean an over-crowded dial. 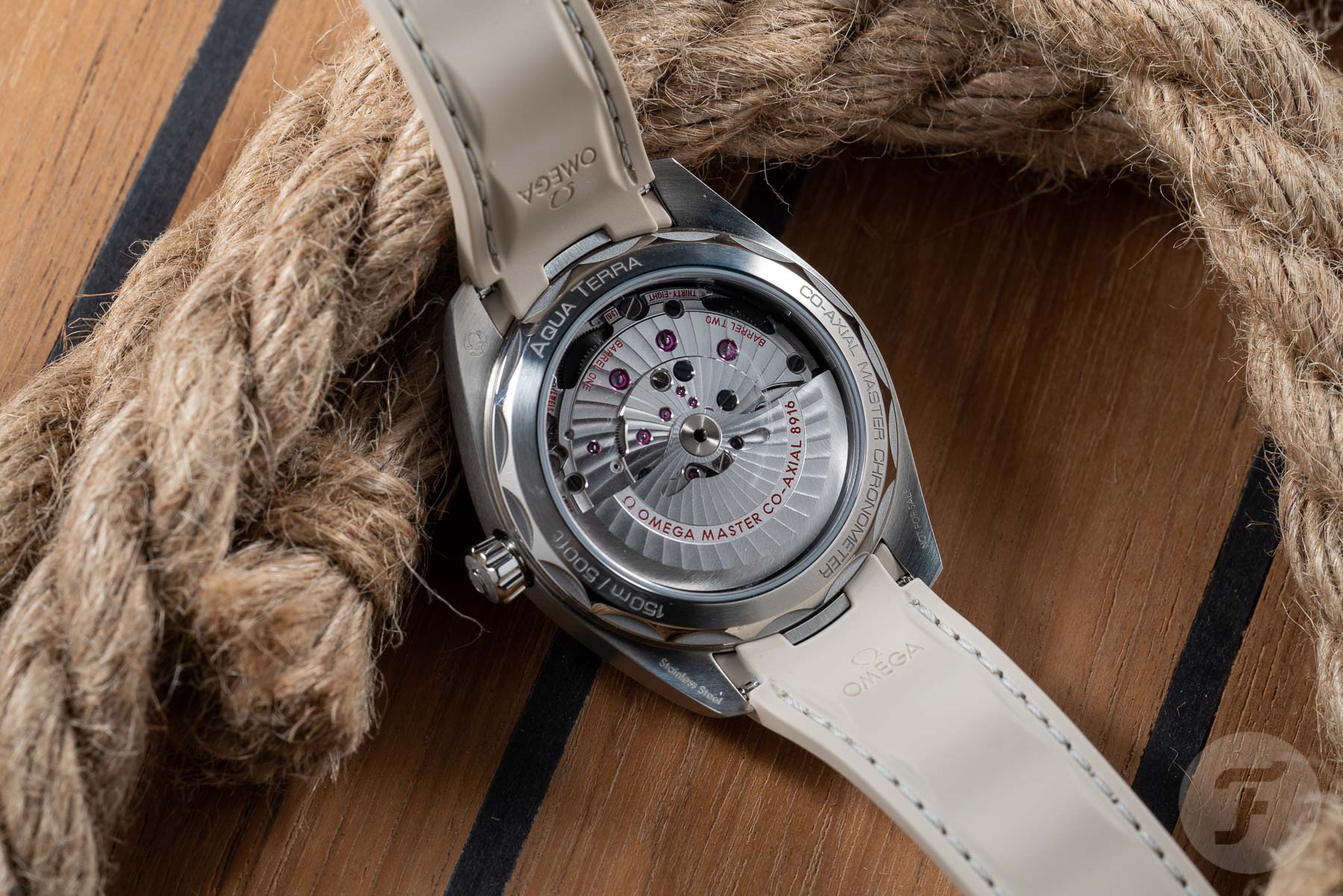 It doesn’t say so, but the Aqua Terra Small Seconds is a Master Chronometer

The fact that there’s no mention of it on the dial doesn’t mean the Omega Seamaster Aqua Terra Small Seconds isn’t equipped with a Co-Axial Master Chronometer movement. Inside is the automatic caliber 8916, which is certified by the Swiss Federal Institute of Metrology (METAS). You can have a look at the way it’s finished and how it works through the sapphire case back. This ultra-precise movement elevates the beige AT above that of a fashion watch that only relies on its good looks to wow you. 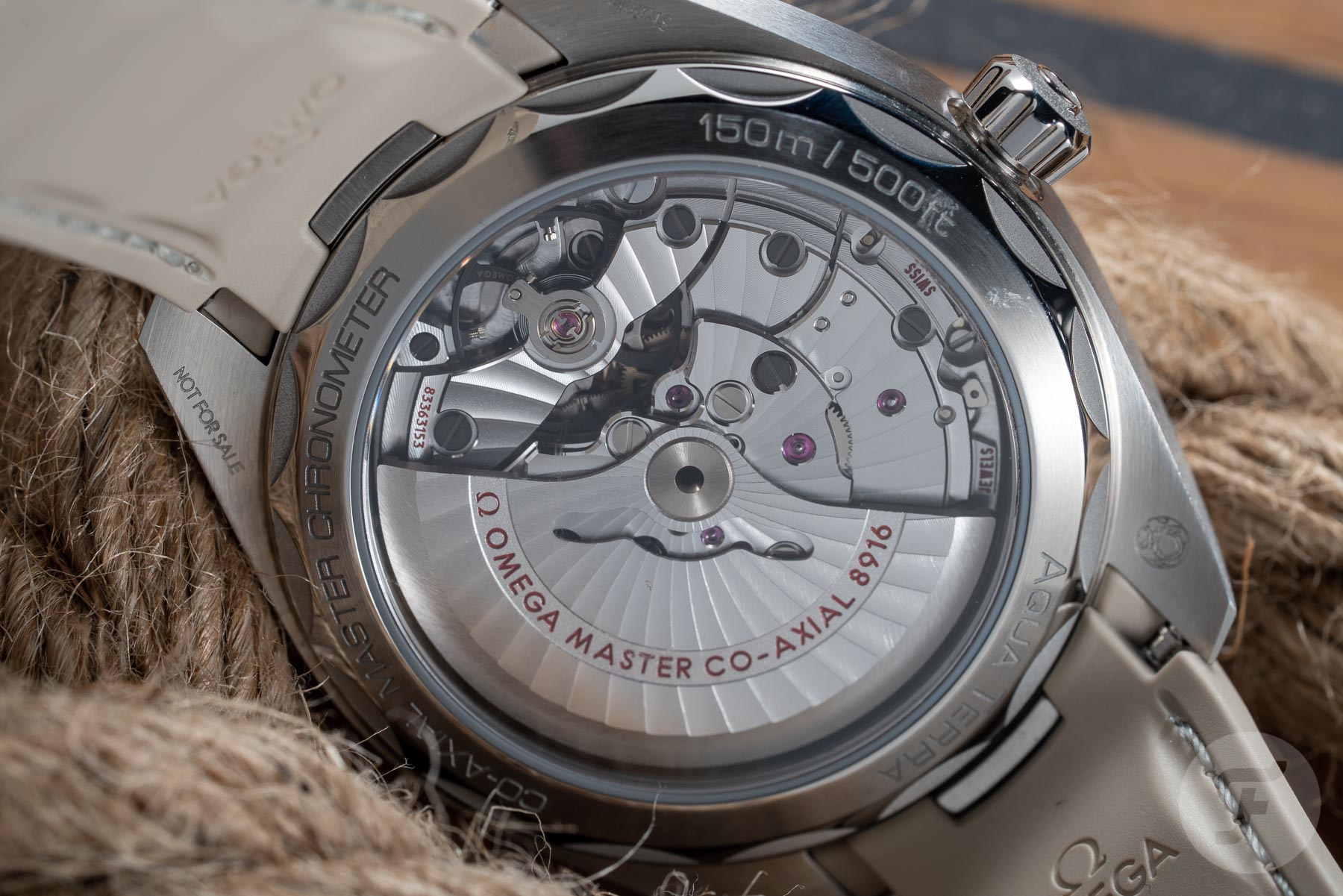 The suspicion that the 41 × 13.1mm Seamaster Aqua Terra Small Seconds, with its lug-to-lug length of 47mm would sit and look perfectly on my wrist proved to be a fact. The size is just right. The soft-spoken dial design with sharp, dark contrasts works well in a watch of substance. Due to its balanced proportions and modern size, which is not too extravagant but also not too introverted, it pulls off being a fashionably styled watch. The shape, height, and weight of the case sit very well on the wrist. The watch is comfortable but present. Credit also goes to the structured beige rubber strap with its stylish, not-too-contrasting gray stitching and a subtle steel insert. The easy-to-adjust strap wears very comfortably, and the same goes for the robust and relatively thin folding clasp. 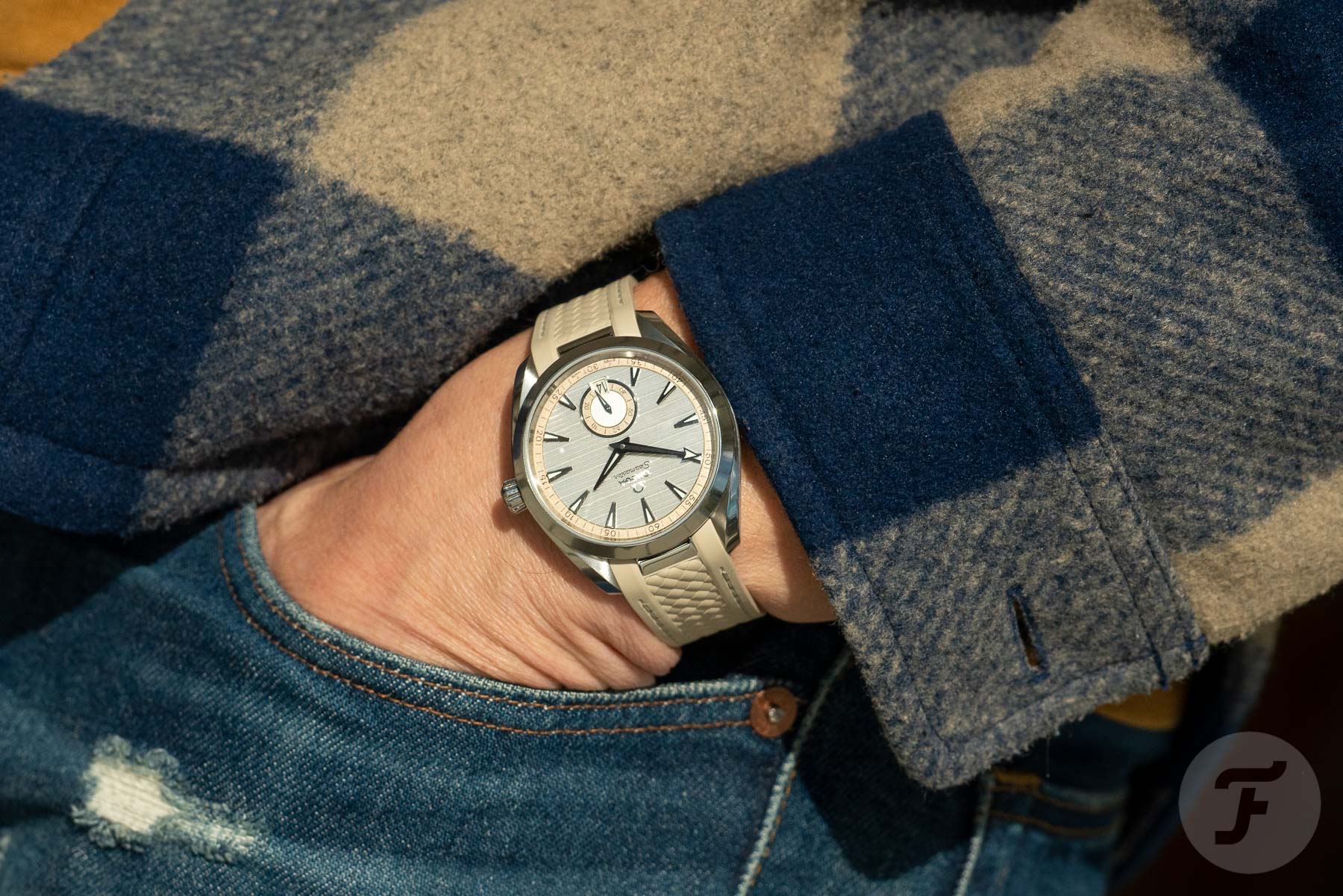 Some of my colleagues said the strap in combination with the dial makes for an excellent summer watch. I don’t disagree, but I think this AT will shine just as well in the other three seasons. If you put the watch on a golden-brown leather NATO strap, it gets a little more serious — Omega has a nice one in the collection. But you could also find something aftermarket that suits your taste. I’m thinking about a cream white — definitely not bright, arctic white — tropical rubber strap for a full-on summer vibe. 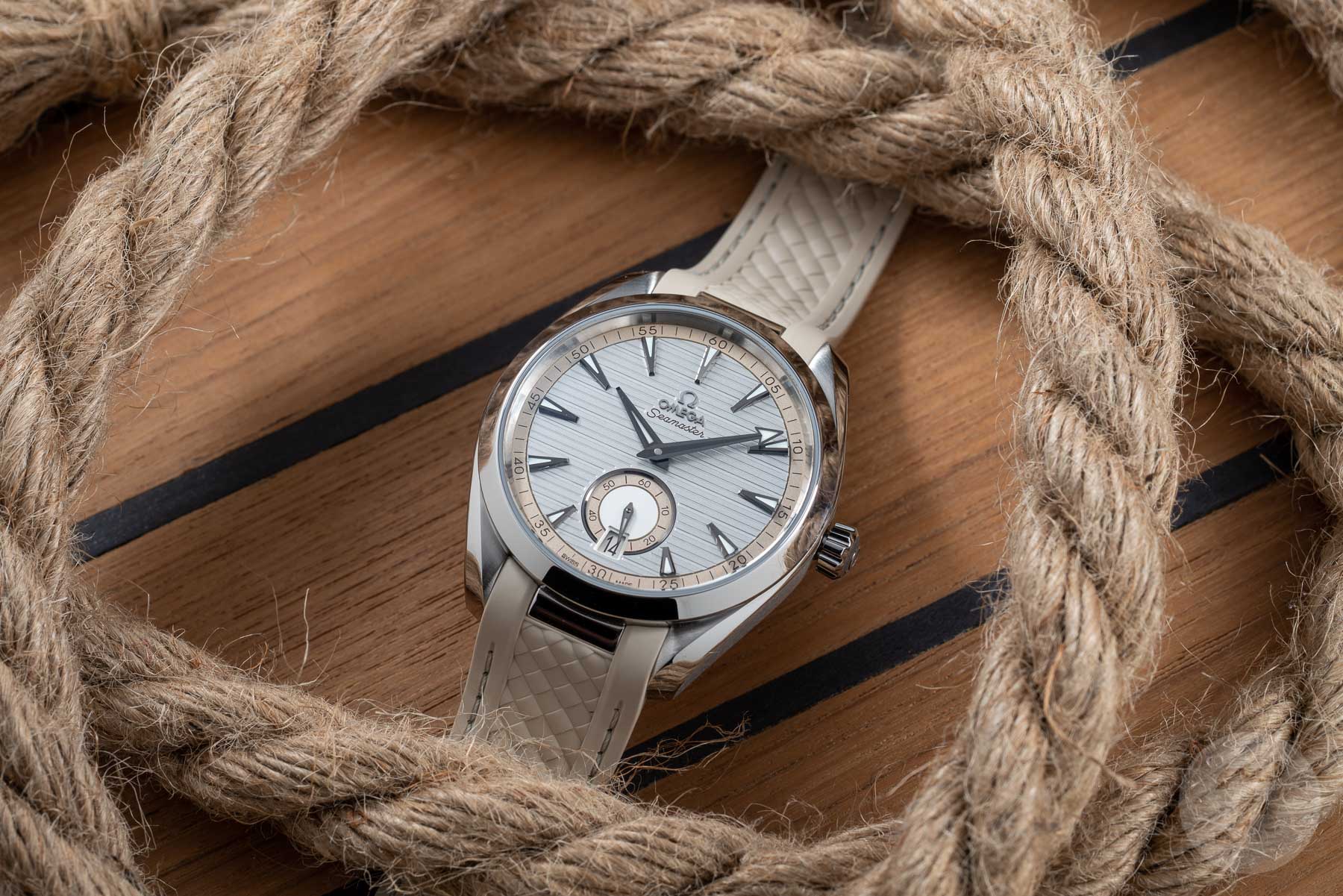 The price for the versatile beige Omega Seamaster Aqua Terra Small Seconds is €6,400. That’s a serious amount of money, but you also get a serious watch with a touch of frivolity for it. Though this will probably not be someone’s first or only watch, it is versatile enough to function as a daily beater or even as the star of a one-watch collection. And if beige is too bland for you — I dare you to give it a try to prove yourself wrong — the green version of the 41mm AT with central seconds could be for you. And if you prefer your AT smaller and brighter, you might want to check out the new AT 150M 38mm in yellow or red. Anyway, there are 292 Aqua Terra references on the Omega website, so take your pick. 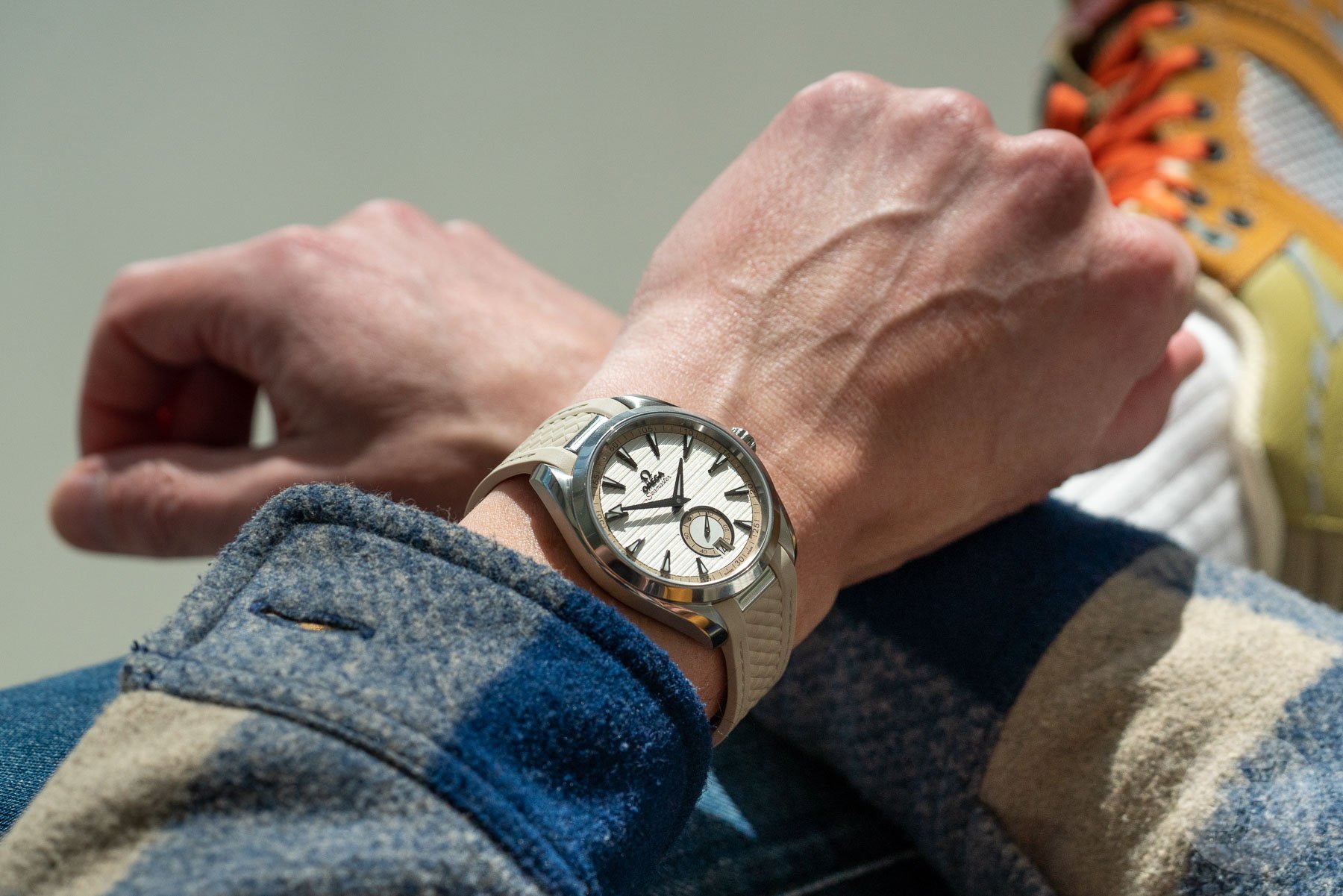 Let us know what you think of this oddball AT in the comments. Is it an intriguing proposition, or just a bit too much? As always, we’re interested to hear your opinions.