Simple but strong. If you value the story and originality more than the movement inside your watch, REC watches should stay on your radar. Today we take a closer look at their recent release of the REC RJM Bluebird, a limited run of 334 pieces.

Your watch doesn’t need to be signed by a watch manufacturer that was founded 200 years ago to have one hell of a story to tell. And if you like WW2 stories, I bet your eyes won’t stay dry after watching the video about the REC Bluebird. 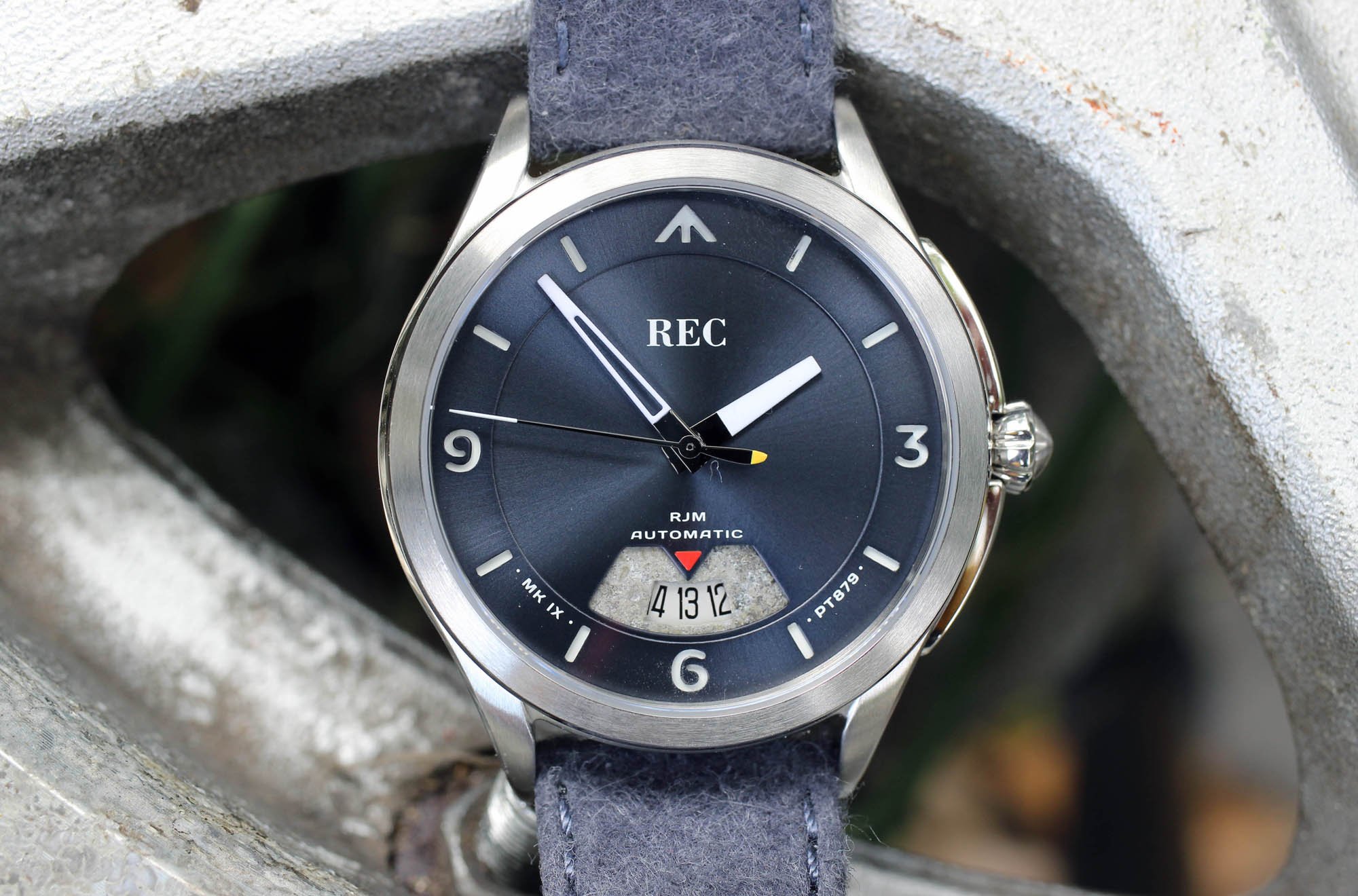 The slightly sunk middle part of the dial got rid of any surface structure, printed tracks, lines or letters you could find in RJM 01, 02 or 03.

My eye on REC Watches

I had to search in my mailbox to find that I first signed up for the REC newsletter over two years ago upon voting on what their next watch should be made from. I remember it clearly – I voted for a Jeep Willys. The concept of REC watches is pretty simple. They find some old metal parts that used to be of a heroic object. Kind of a cult that resonates for decades. The two Danish entrepreneurs, Christian Felix Mygh and Jonathan Kampstrup have thus far found their way to a few iconic Ford Mustangs, Mini Coopers, and today’s suspect, a legendary Spitfire. As their next step, this duo of childhood buddies transforms some of the mass of these mythical objects into watches. Pretty genius.

The guys ensure that throughout the entire manufacturing process, they preserve as much of the material’s original appearance as possible. We can skip the early quartz days and fast forward twelve months to 2015, the year of launching their first mechanical series, the P-51 Collection. Dials recycled from a salvaged Ford Mustang were designed by world-renowned Swiss design agency, Studio Divine. The model was successfully launched on Kickstarter and raised nearly $500,000. As a big Porsche Classic enthusiast, I was looking for the second mechanical collection, made from the air-cooled Porsche 911. Kickstarter again, nearly $650,000. However, I ended up not liking the REC Porsche design as much, so I passed on the purchase. 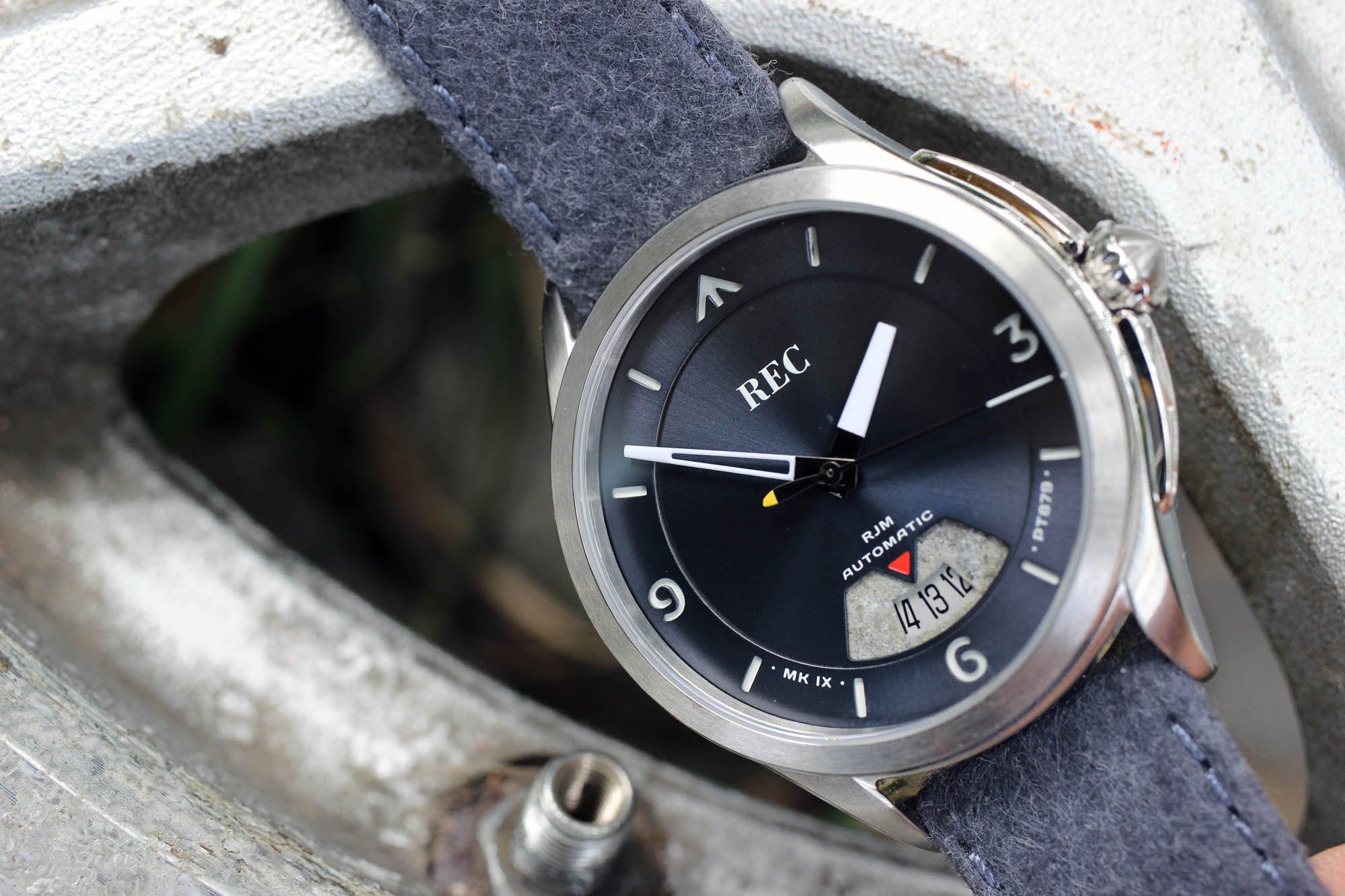 A public vote on the next REC watch

The REC founders cunningly engage customers, potential customers, and the general public to help them decide what story comes next. The Spitfire won the poll from April 2017 and defeated my candidate, the Jeep Willys. If we make some calculations, it was nearly a year and a half until the REC RJM hit the market at the end of the last year. There were three models introduced at the beginning, recently followed by a limited edition of 334 pieces with a blue dial and blue woven strap inspired by the iconic RAF uniforms.

All four REC RJM collection models incorporate salvaged parts from a Spitfire Mark IX aircraft serial number PT879. The PT879 was among the approximately 1.118 Mark IX Spitfire aircrafts delivered in Murmansk as part of the Allied Forces Lend-Lease aid policy to support the Russian war effort. It left the factory at Castle Bromwich on the 4th of August 1944 and crashed during a dogfight in Spring 1945 with just 29 hours of airtime. It was recovered off the Russian tundra by an anonymous farmer. 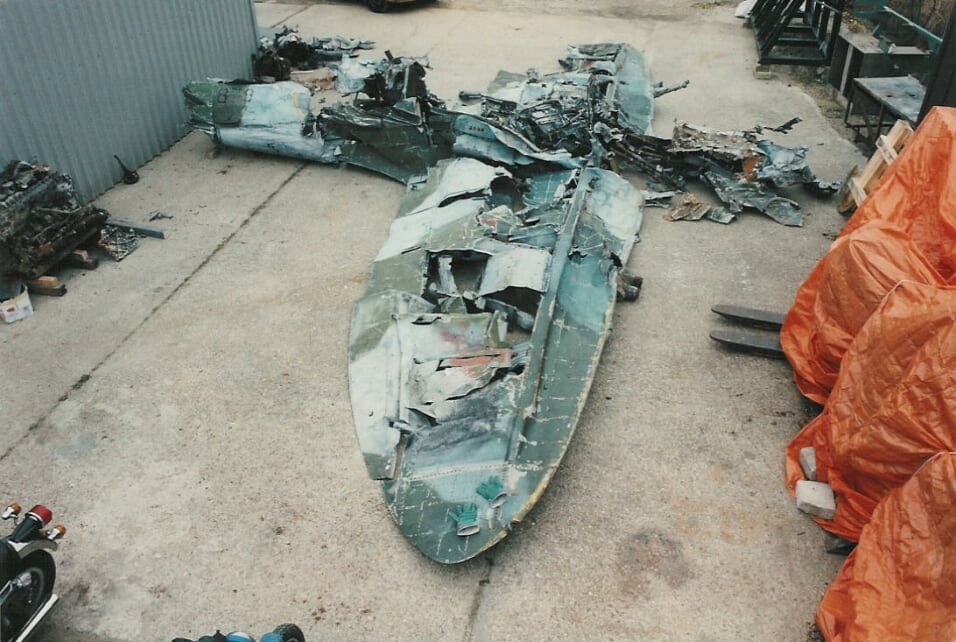 This particular Spitfire was recovered in Murmansk in 1998 as a complete aircraft. The founders say that this is the only Spitfire aircrafts ever to have returned from its service in Russia. Today, the PT879 is undergoing a full restoration in the UK by Peter Teichman, an accomplished pilot that has made it his life’s work to restore classic warbirds to their former glory. He had made no compromises in restoring the PT879 to the same standards as when it left the factory. REC managed to salvage the wings that were not suitable for restoration and gently cut the approximately 4000 pieces of untreated aluminum for the RJM collection directly from them. 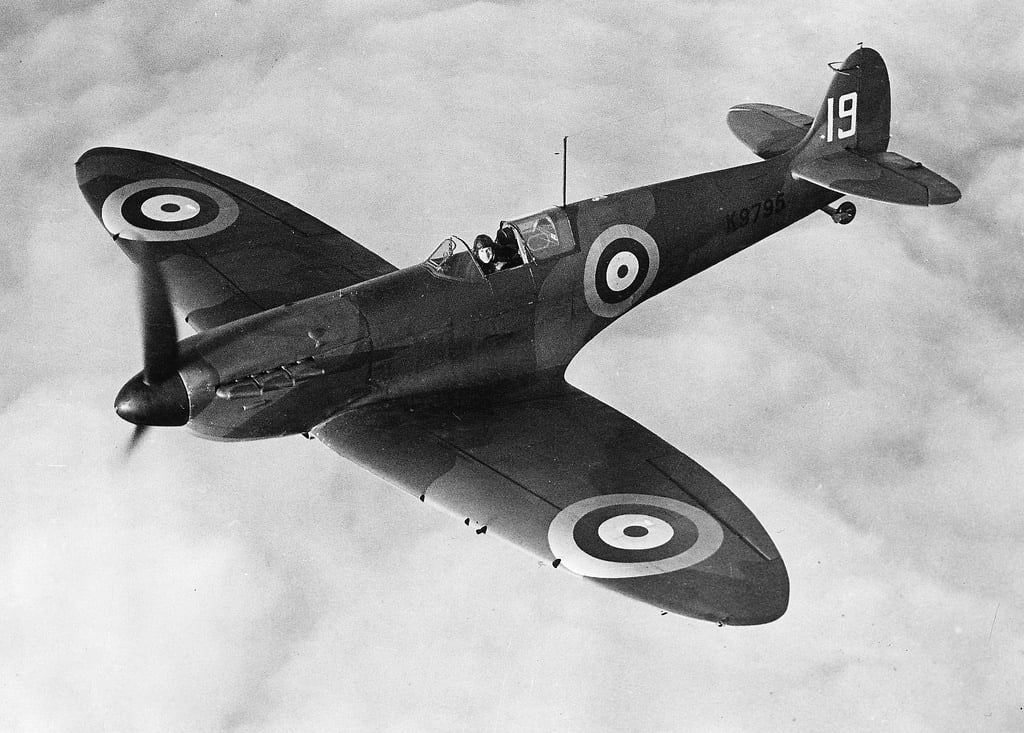 Spitfire in all glory on an archive picture. Image source: Wikipedia

The color tonality and dial styling of previous RJM models strongly resembles WW2 pilot’s watches. What I like about the Bluebird RJM-04 limited in particular is that the founders made it more elegant. The slightly sunk middle part of the dial got rid of any surface structure, printed tracks, lines, or letters you could find in RJM 01, 02, or 03. The resemblance to vintage aviation and military watches is more subtle, and the watch evokes that uncertain but pleasant feeling where you know you like the watch, but can’t exactly pinpoint why. But I guess educated watch enthusiasts can see it. 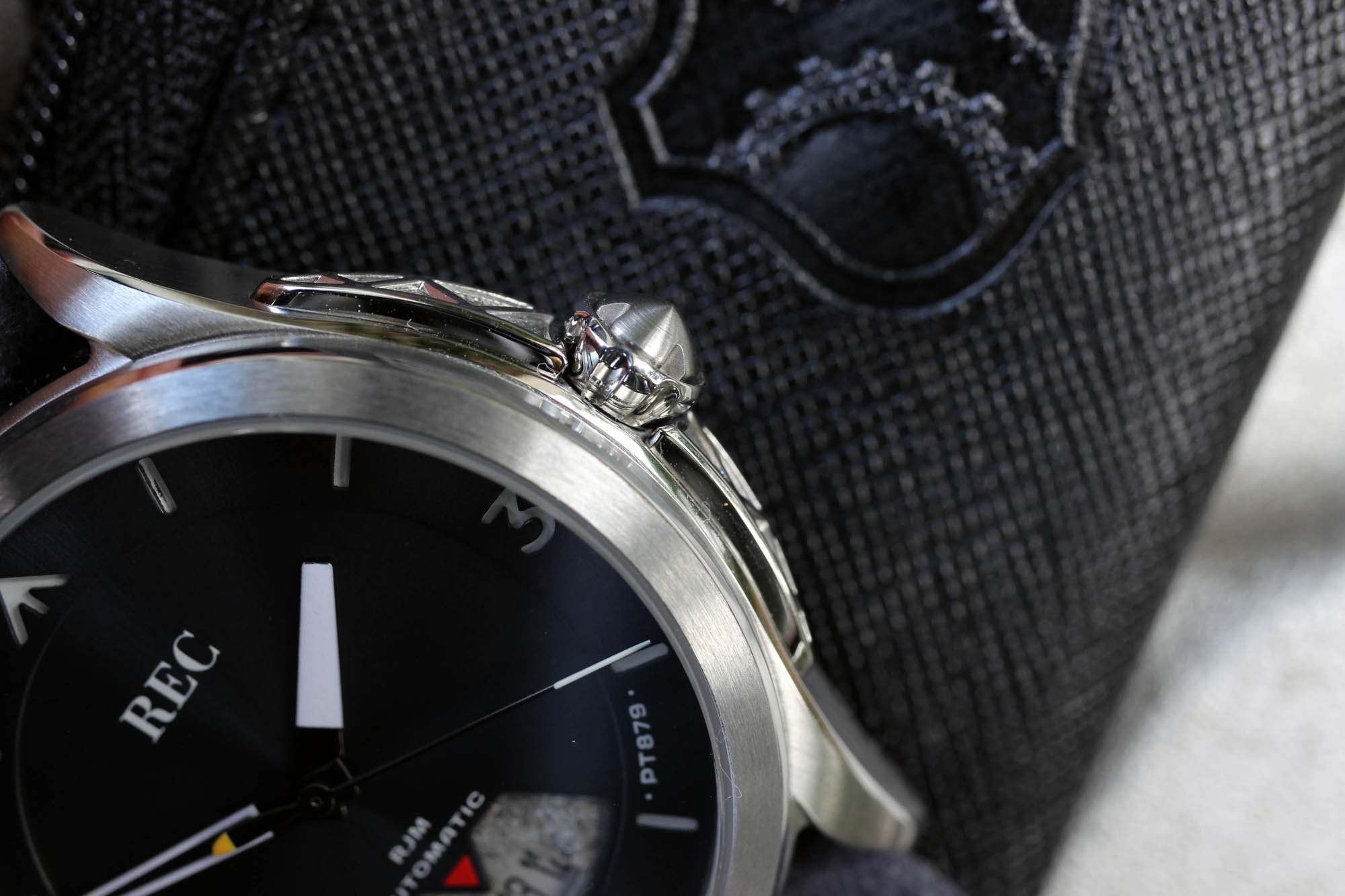 The broad arrow on the top of the flat outer dial ring is integrated so gently that you consider it unique to the watch design. Lovers of the so-called Dirty-Dozen, a set of 12 watches commissioned by the British Ministry for soldiers fighting under the British crown, can immediately recognize the broad arrow. It is frequently seen on military dials and case backs, and it is the traditional marking for the property of the Crown. 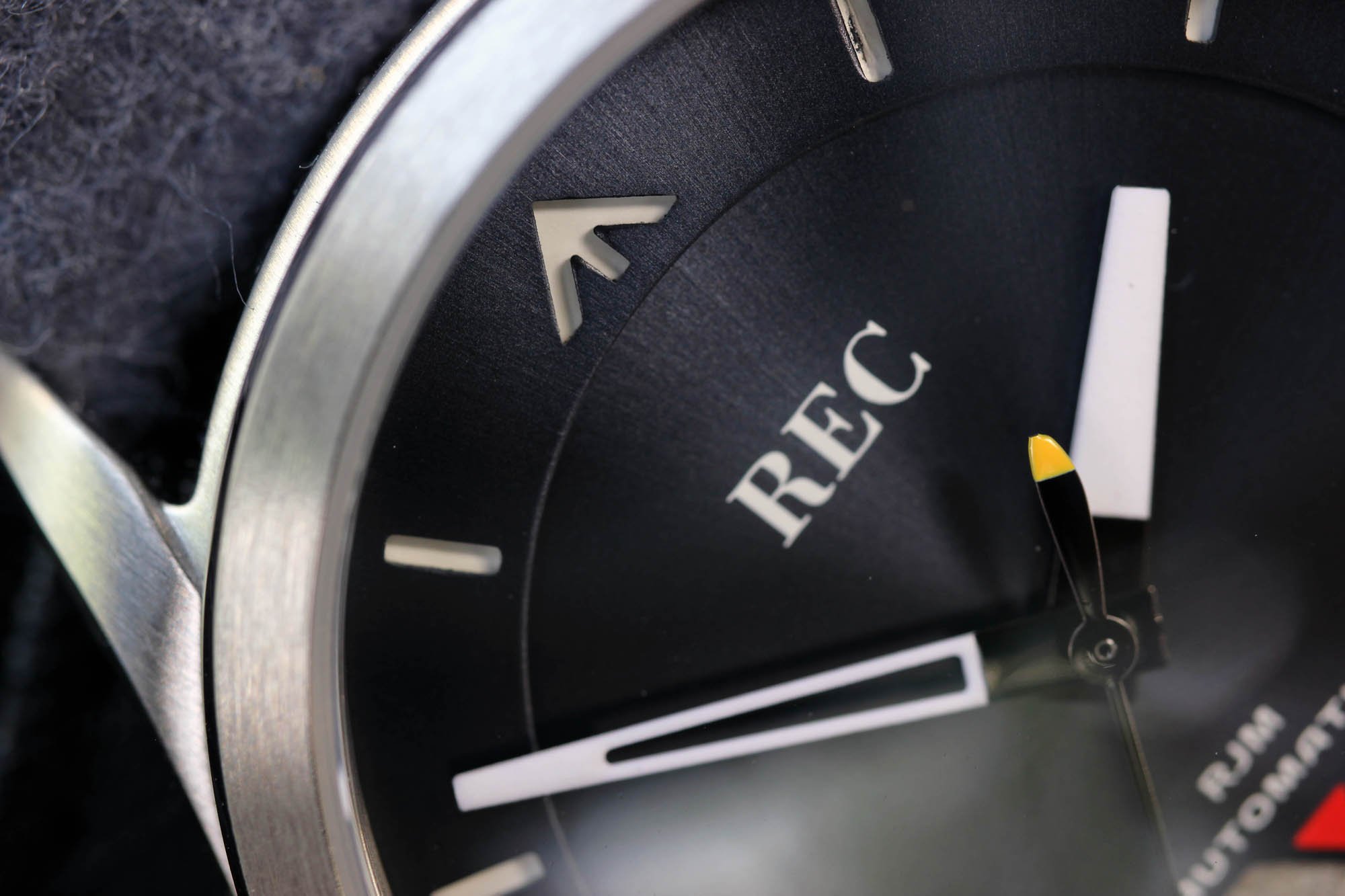 The outer flat dial ring is slightly heightened with the hour markers, and numbers cut into it. Designers achieved a subtle, airy effect with luming visible through it. The luming creates numbers and negates the usual role of only being partial filling material. It perfectly matches the central REC brand name, the small MK IX markings, and the original aircraft serial PT879, both placed in unusual places. At first, I was a bit disturbed by the big flat hour hand as I considered it a bit boring. But after a week on the wrist, I found it perfectly legible. 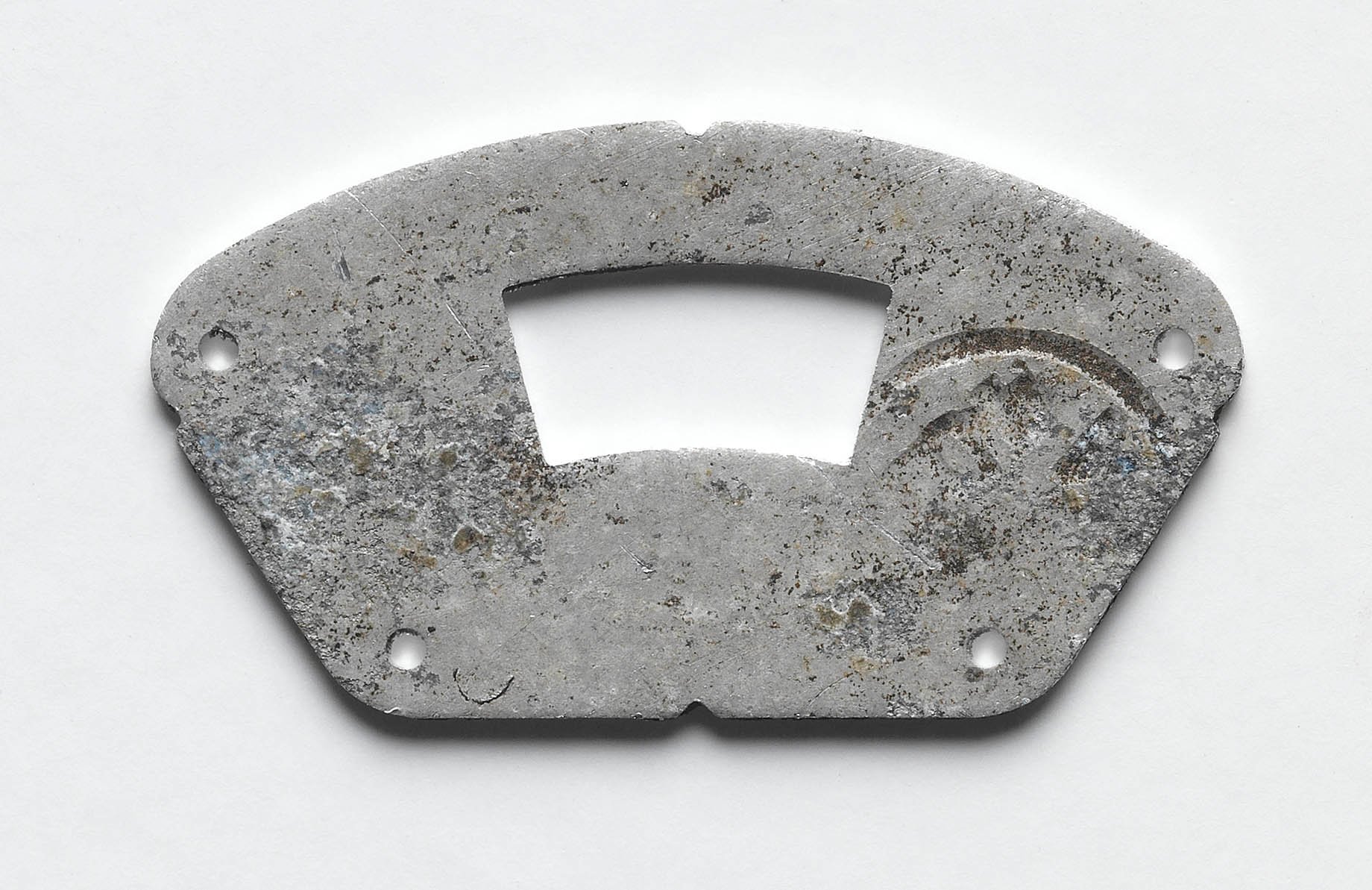 The handcrafted and untreated aluminum dial is cut directly from the wings of the PT879 MK IX Spitfire aircraft.

The striking structured frame above the six strongly reminds me of car brake pads due to its shape but is none other than the untreated piece of Spitfire aluminum. At this moment, you see a stair-like structure uncovering four layers. It creates a beautiful cut through effect as if you could see deep into the sunk structures of the watch, with a date disc on the bottom. Another thumbs up for implementing the RJM Automatic sign and sporty red arrow pinning on the right date. 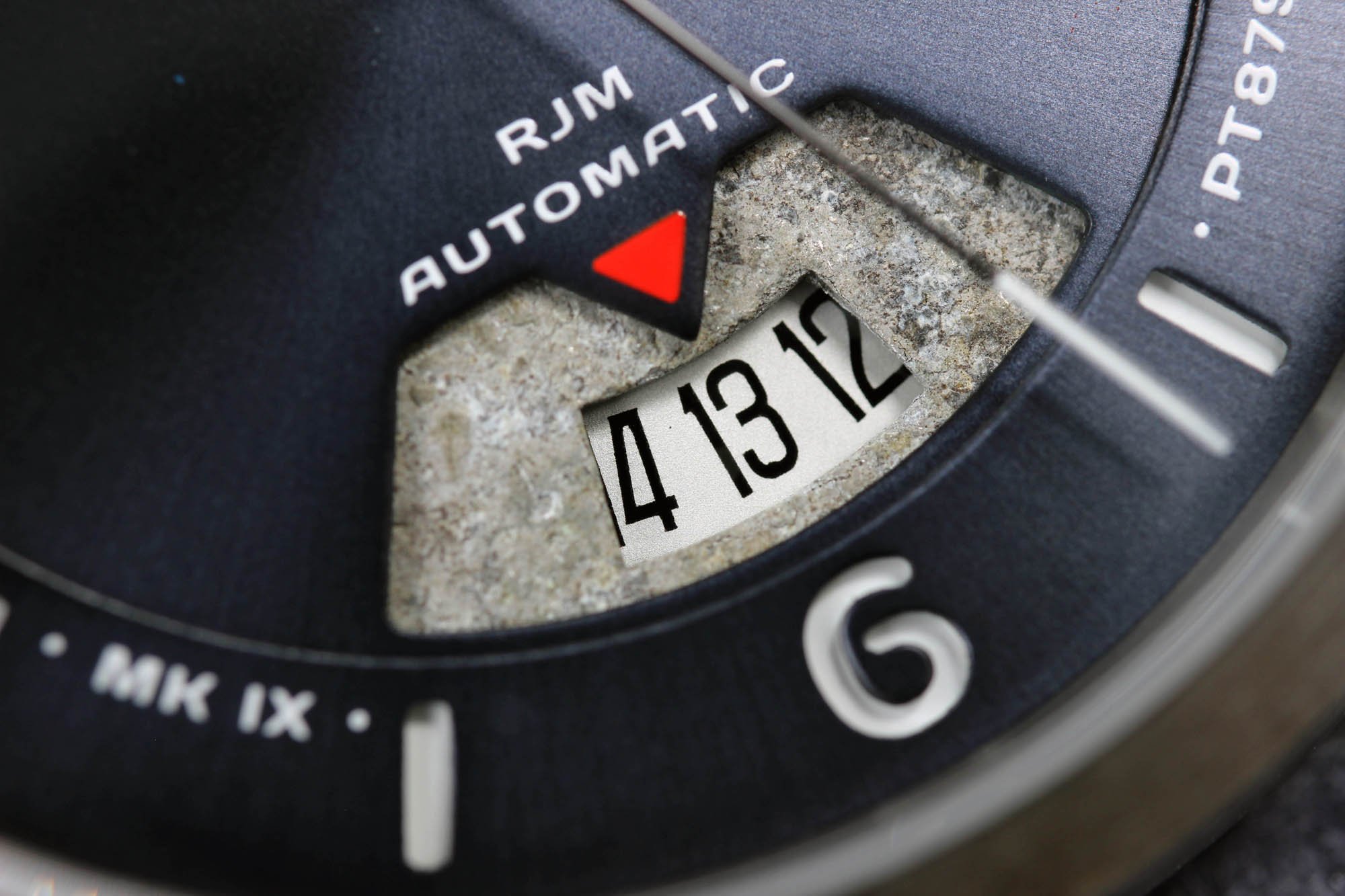 The luming literally creates numbers and negates the usual role of only being partial filling material.

The case and case back

The profile view from the crown side is a sight for sore eyes. The lengthy crown guards remind us of wings with the crown playing the role of the confident aircraft nose. You feel like the Spitfire is flying directly towards you. If you want to avoid a collision, turn the Bluebird around. The case-back fixed with five screws holds a 24-jeweled self-winding Miyota cal. 9015. The best part for me, a retired scale modeler, is the rotor decoration inspired by the Spitfire metal rivet construction. I find it one of the better rotor decoration designs, spiced up with great detail. Every single rivet on the donor PT879 MK IX Spitfire aircraft was removed by hand to re-use as much of the aluminum in the restoration process as possible. 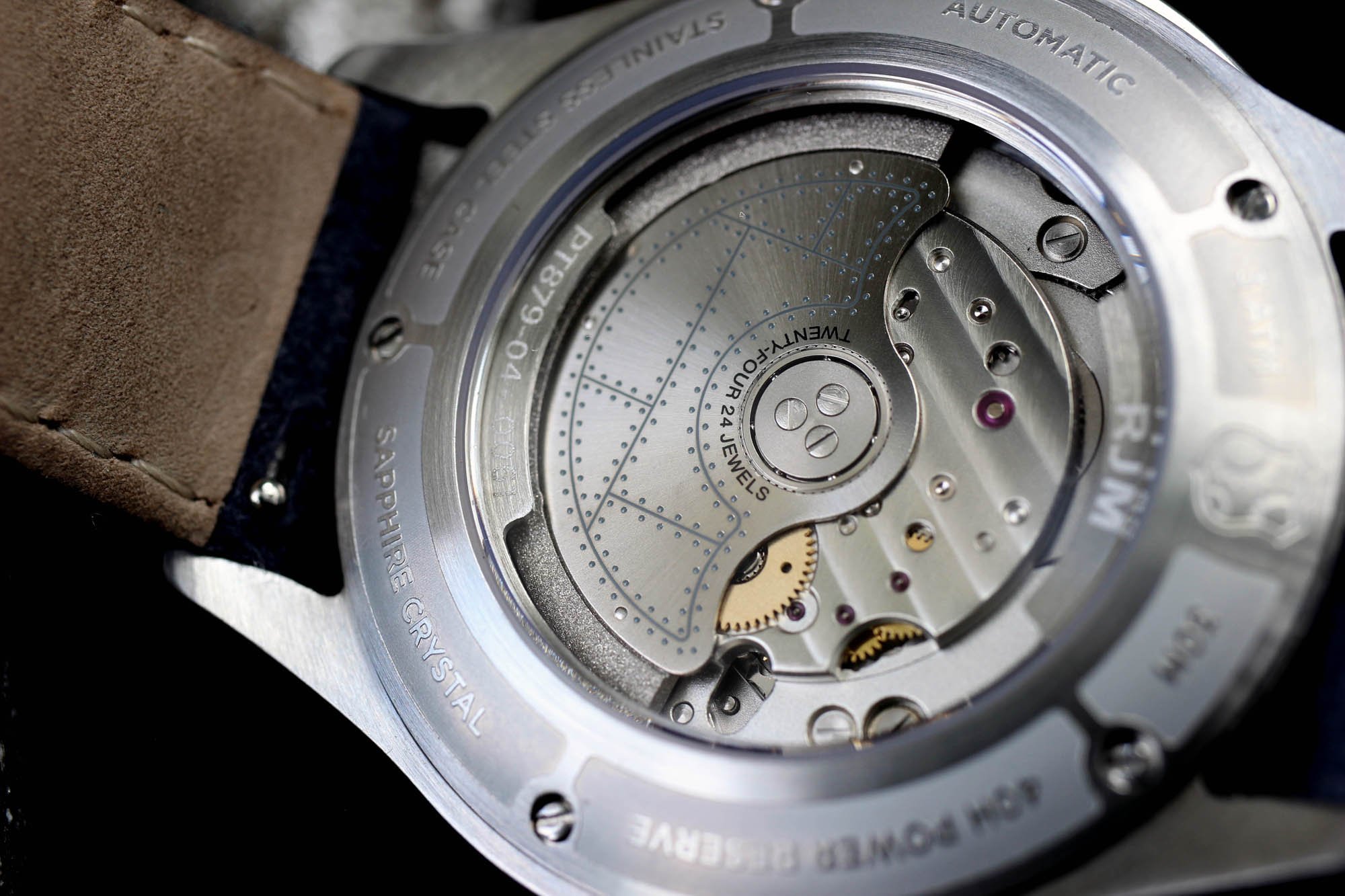 Of the approximately 20.000 Spitfire aircrafts built between 1938-1948, less than 100 original planes are currently estimated to be operational and in airworthy condition. The tail of the seconds hand on the REC RJM Bluebird is inspired by the propeller blades of the MK IX. Each RJM watch comes with a scannable Story Card, taking new watch owners directly to a video documenting the story, anecdote, and origin of the specific airplane that became part of their RJM watch. 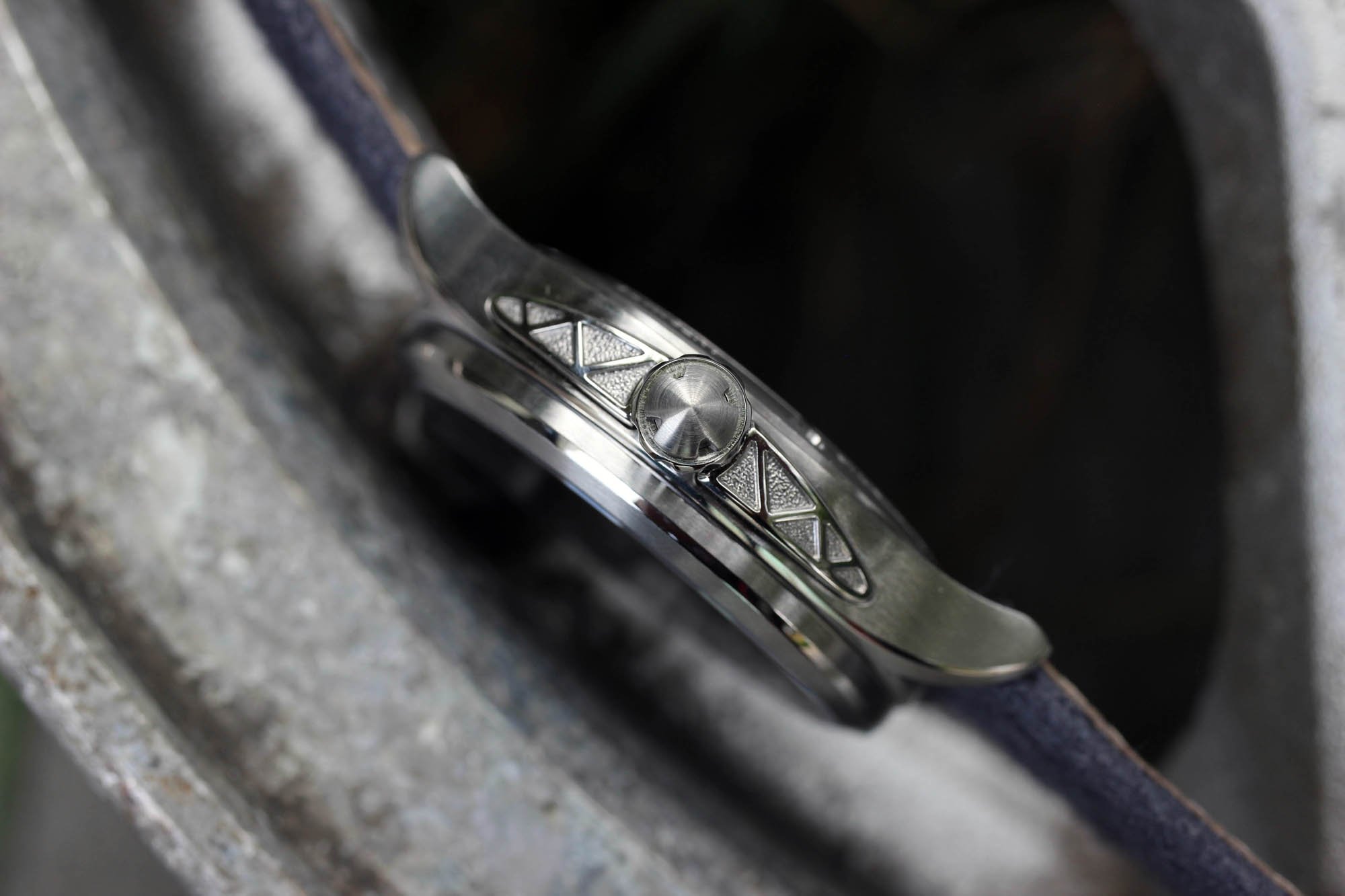 The concept of using a unique (raw) piece of material into a watch is not new. But these Danish guys made it part of their brand DNA. Looking at their portfolio now, five years after the first launch, we see a very lovely line-up. There is another model already in the pipeline but with an embargo on the particular part to be used. Don’t feel guilty if you always think of a typical red recording symbol and see some video-production company when spotting the REC brand name. The guys plan to stick around for decades promising that REC will eventually be associated with fine timepieces and unique production stories only. 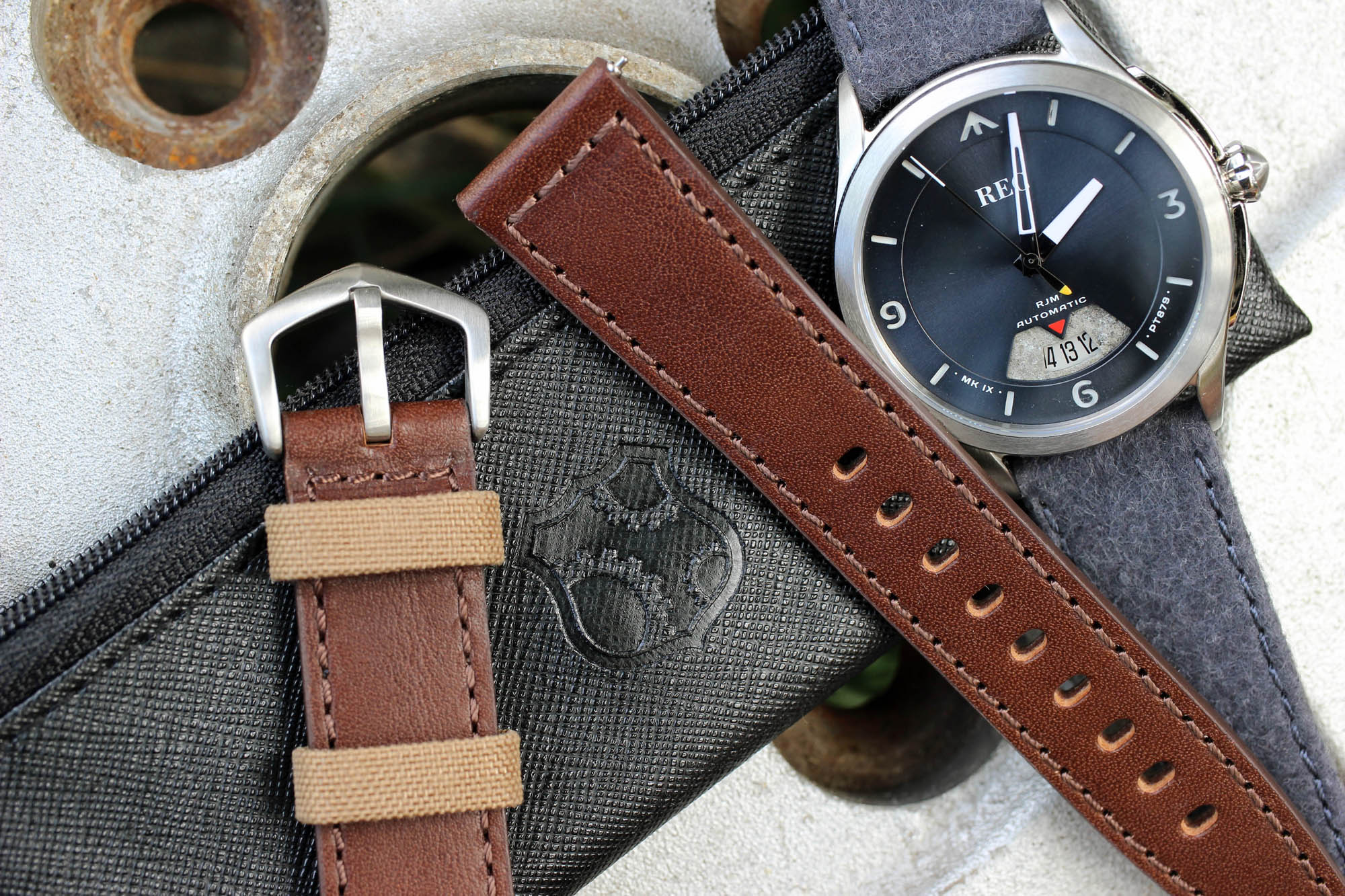 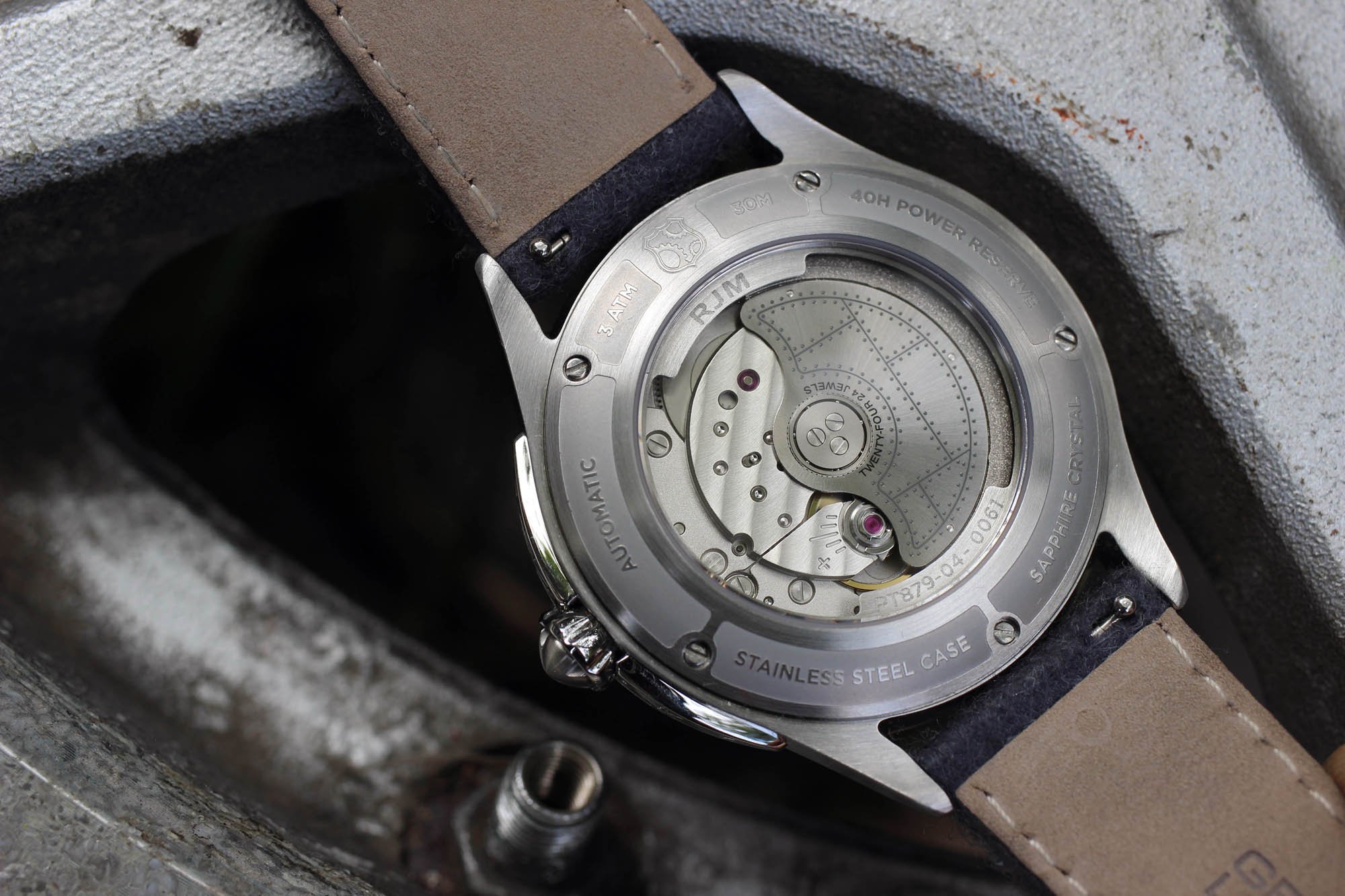 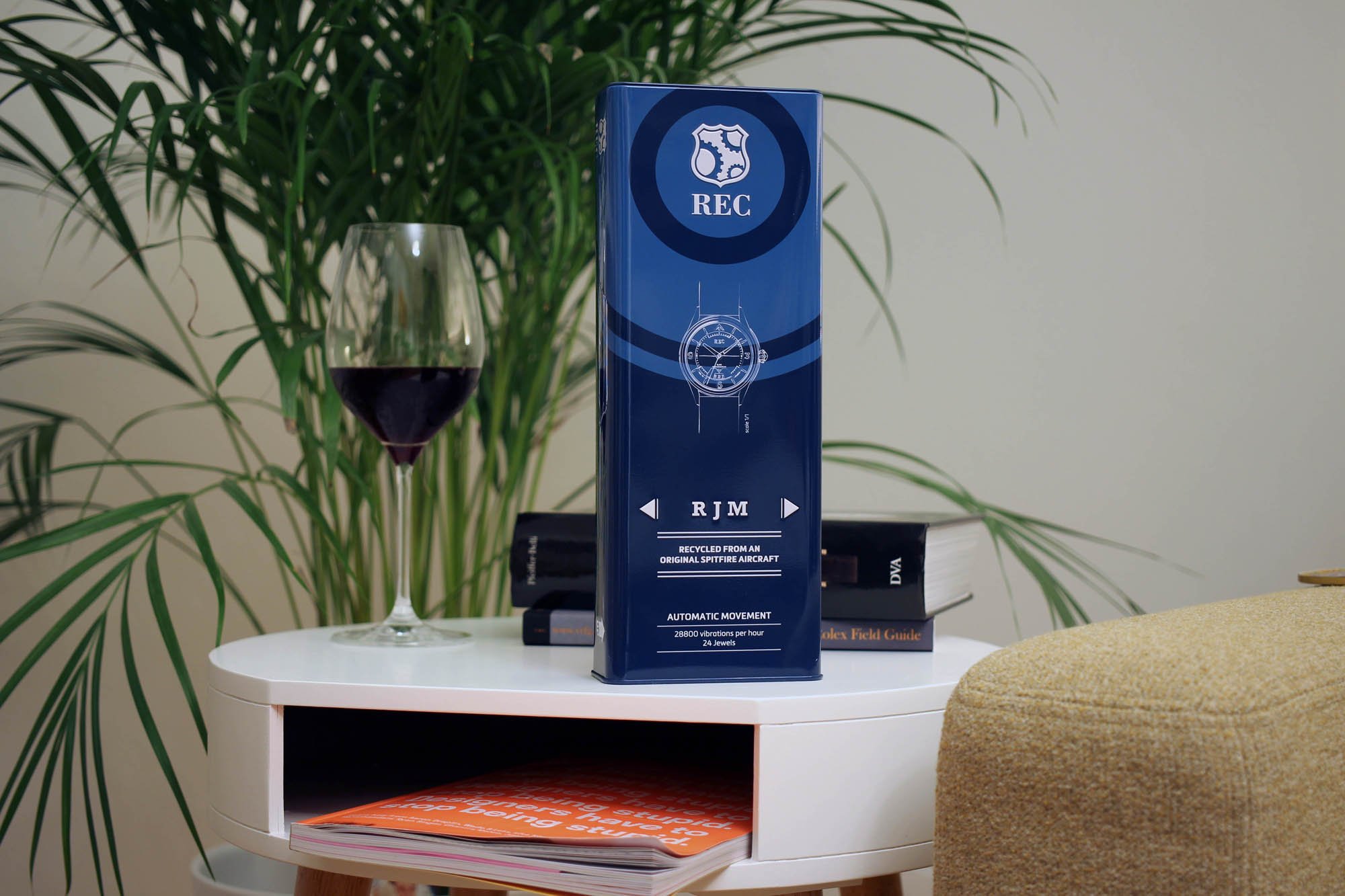