A brushed titanium flying saucer sits lightly on my wrist. Through its sapphire porthole, the Earth as viewed from above the Indian Ocean slowly spins below. Two black rings of numbers and markers surround the globe as satellites would. Am I having an out-of-body experience? Is this a UFO? To the first question, maybe. But to the second question, no. I’m wearing the CIGA Design Blue Planet, a watch of radical design and radical mechanics that is thoroughly grounded, if you catch my drift. The award-winning Blue Planet says and does a lot. I’m not sure a louder statement piece has graced my wrist before.

Back in April, I wrote a piece featuring various watches from China. Not watches merely made in China, but those that are emphatically Chinese in origin and manufacture — and proudly so. One watch on that list was the CIGA Design Blue Planet. Now I’ve had the opportunity to see it up close and wear it. The radical design and strong statement — not to mention quirky yet effective mechanics — make this piece look and wear like a much more expensive watch than it actually is. I slot it firmly in the statement/art watch genre, though it’s comfortable and capable enough to be a daily wearer if one feels so inclined. More than anything, though, the CIGA Design Blue Planet is fun. 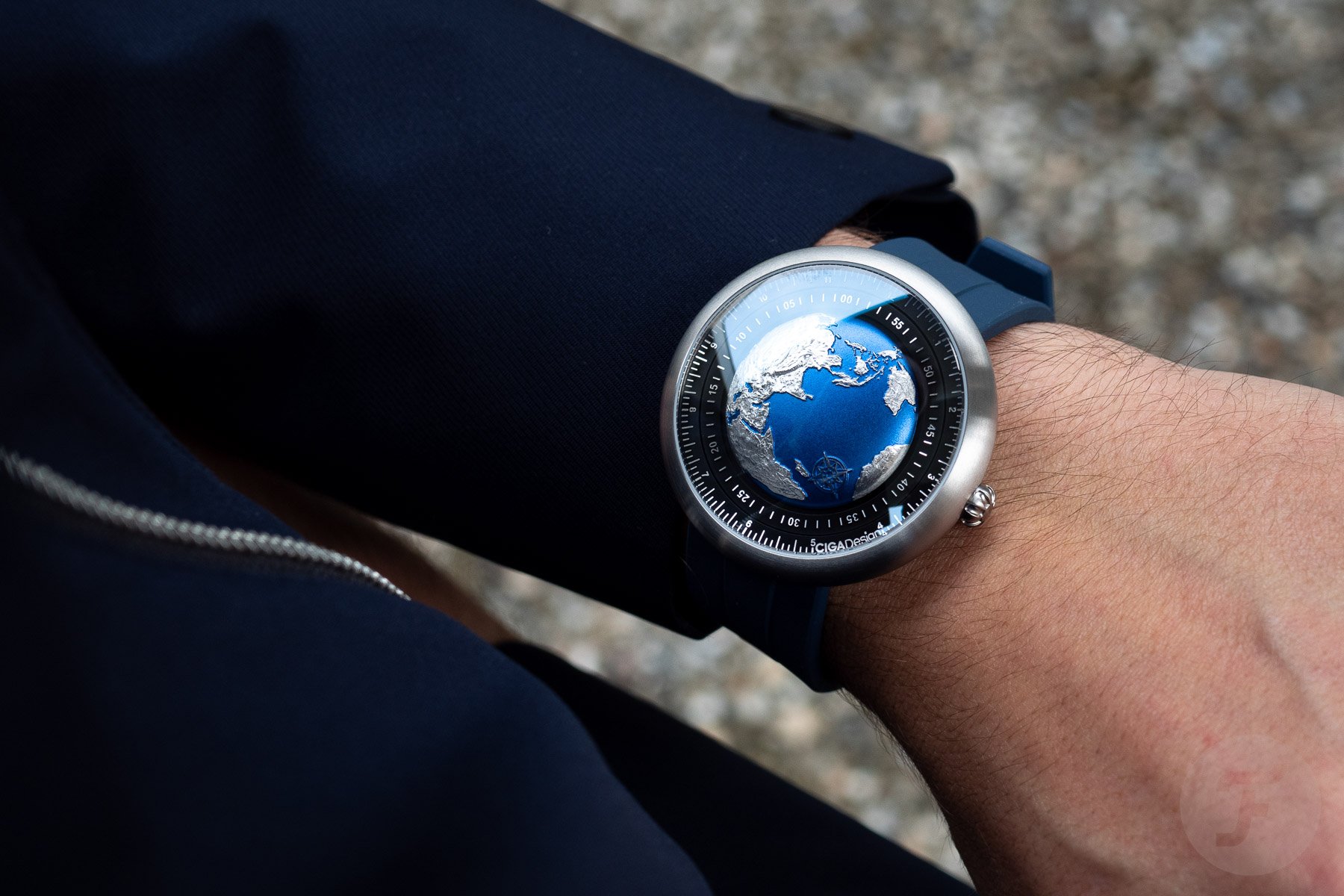 The Blue Planet is the brainchild of Jianmin Zhang, a renowned Chinese designer. Its full name is the CIGA Design Mechanical Watch Series U Blue Planet. We’re calling it the Blue Planet for short. As the press material surrounding the watch states, the Blue Planet aims to inspire a feeling similar to that expressed by astronauts upon their first view of Earth from space. This is called the “overview effect”, and it has been known to instill long-lasting aversion to war and feelings of connection with all living things. Those more eloquent than I have described the feeling as a sensation of simultaneous fragility and oneness. To see Earth as it is — a tiny rock flying through the vastness of space — is to experience one of the stronger reality checks afforded to humankind. 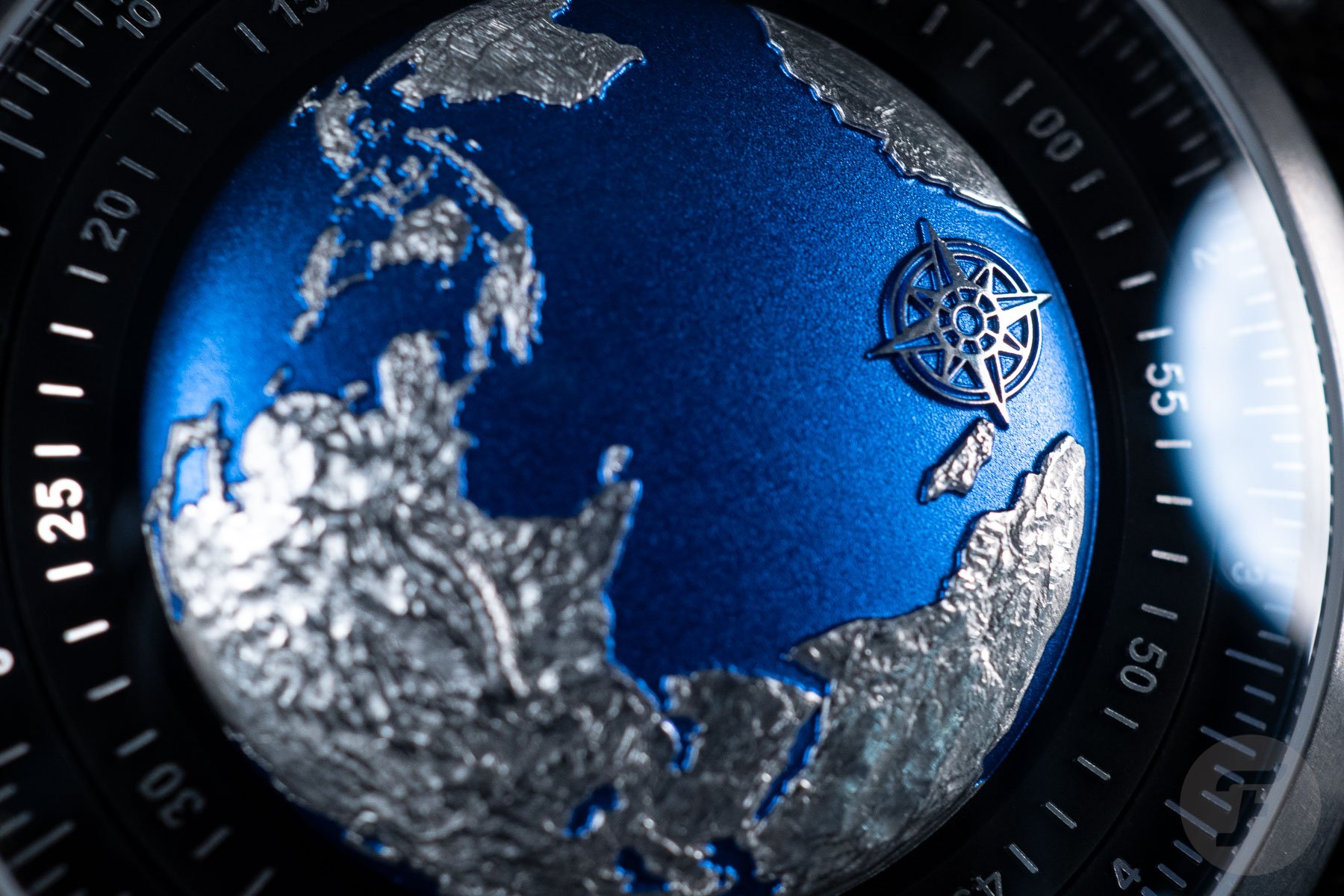 The Blue Planet watch does as well as any watch could in emulating that experience (head back nearly twenty years for the eerily similar quartz-powered Seiko Think The Earth Wn-1). The domed and detailed globe spins slowly on the wrist, adding to the feeling of an extraterrestrial perspective. The landmass is detailed to the extent that one can identify the Himalayas and other geographical formations. As CIGA Design describes, the domed sapphire crystal represents the atmosphere. The strength of sapphire in this case may not help sell the metaphor. 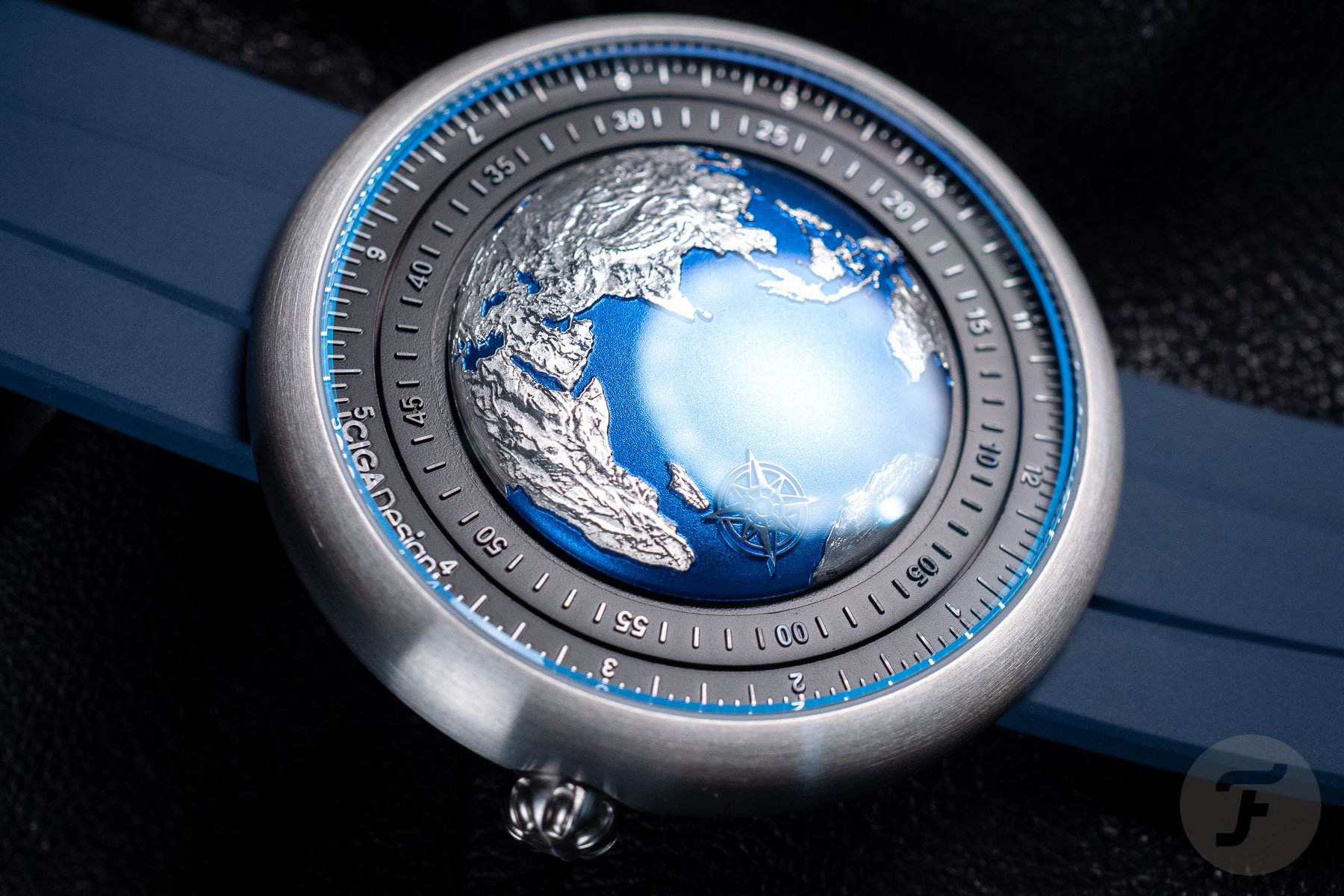 It does tell time

There is a compass rose on the globe, nestled between Madagascar and Antarctica. The outer point is the arrow by which time is read. An automatic caliber unique to CIGA Design fully rotates the globe on the watch once every 12 hours, so that the compass points to the correct hour on the outermost ring. The outer hour ring does not move. The ring between it and the globe, however, does. This is the minute ring, and its rotation has been engineered so that the point on the globe always points to the correct minute. This setup causes the experience of initially setting the watch to be mildly disorienting in the best way. The globe spins and the minute ring flies by. Once the Blue Planet is wound and set though, the slowness of their rotation subdues the eccentricity.

Readability became a breeze once I reoriented myself to the unique nature by which the Blue Planet tells time. The single pointer with the clearly notated hour and minute rings makes reading it easier than some more typical yet minimal watches. 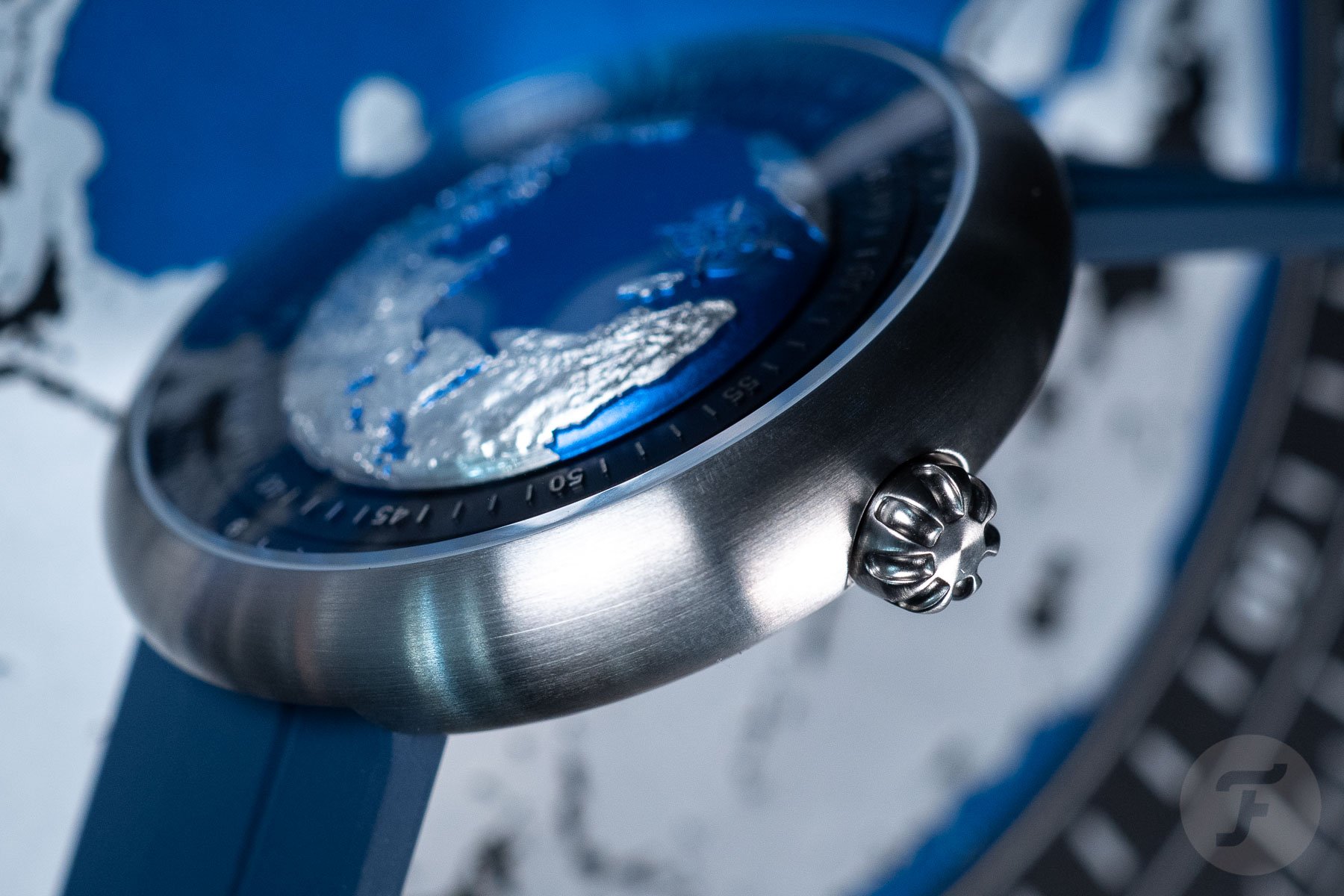 The setting and hand-winding of the automatic caliber are done with the crown at 3 o’clock on the case. It’s an unfortunate necessity, as the perfectly circular brushed titanium case is not interrupted anywhere else except for cutouts underneath where the rubber strap connects. The curve of the case matches the curve of the sapphire crystal perfectly. From the side, the Blue Planet resembles a UFO in the most traditional sense — a flying saucer. I haven’t quite wrapped my head around what the symbolism is for a watch with a case that resembles an alien spacecraft housing a representation of the earth. I don’t think I have the clearance for such design cues. 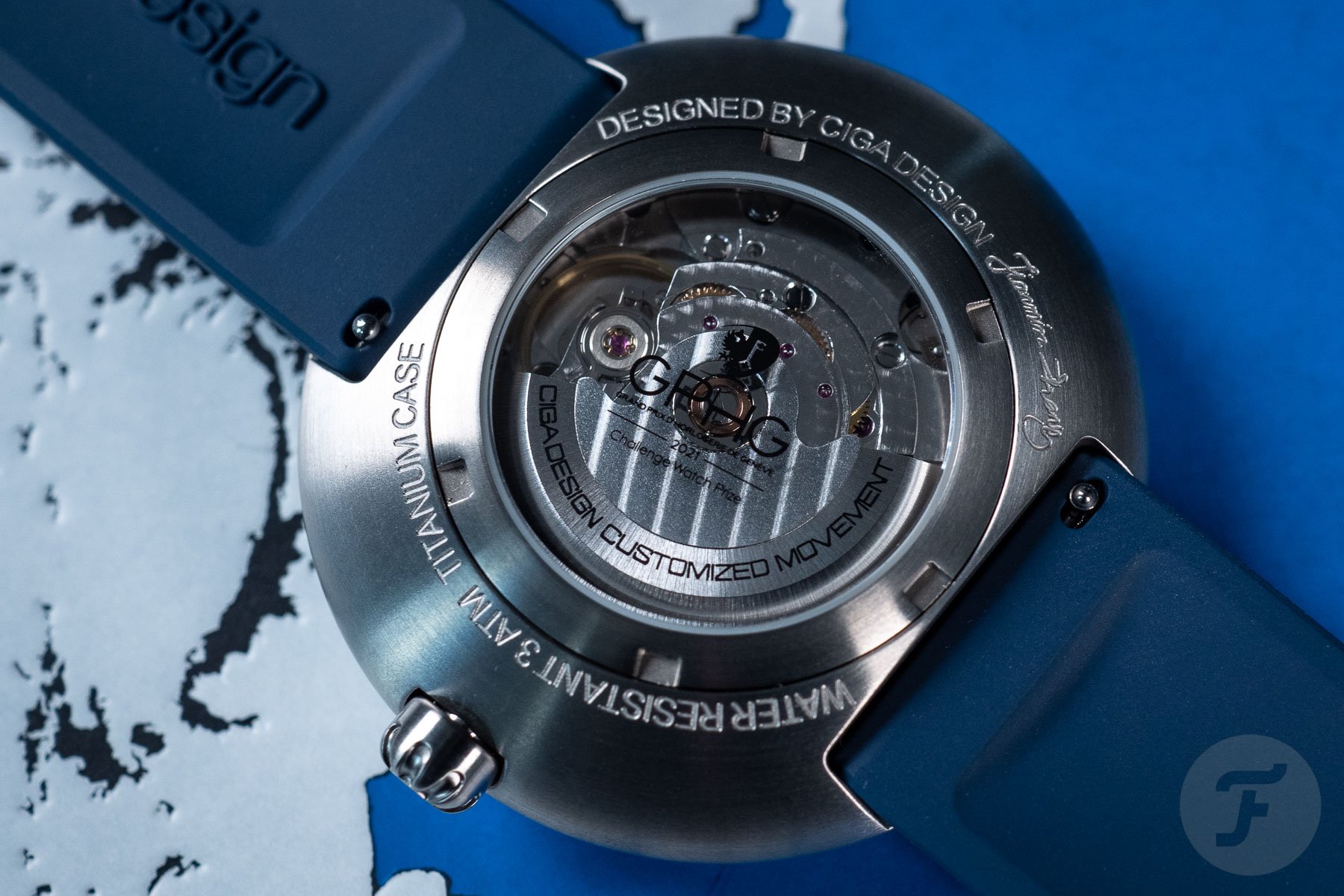 The special caliber used in the Blue Planet has a power reserve of 40 hours and an accuracy of +30/-15 seconds per day. CIGA Design doesn’t specify what the caliber is or is based on. However, it’s visible through the exhibition case back beneath the printed text indicating the Blue Planet’s GPHG award from 2021. That’s something worth indicating. That achievement made CIGA Design the first Chinese watch company to win an award at the Grand Prix d’Horologie de Genève. 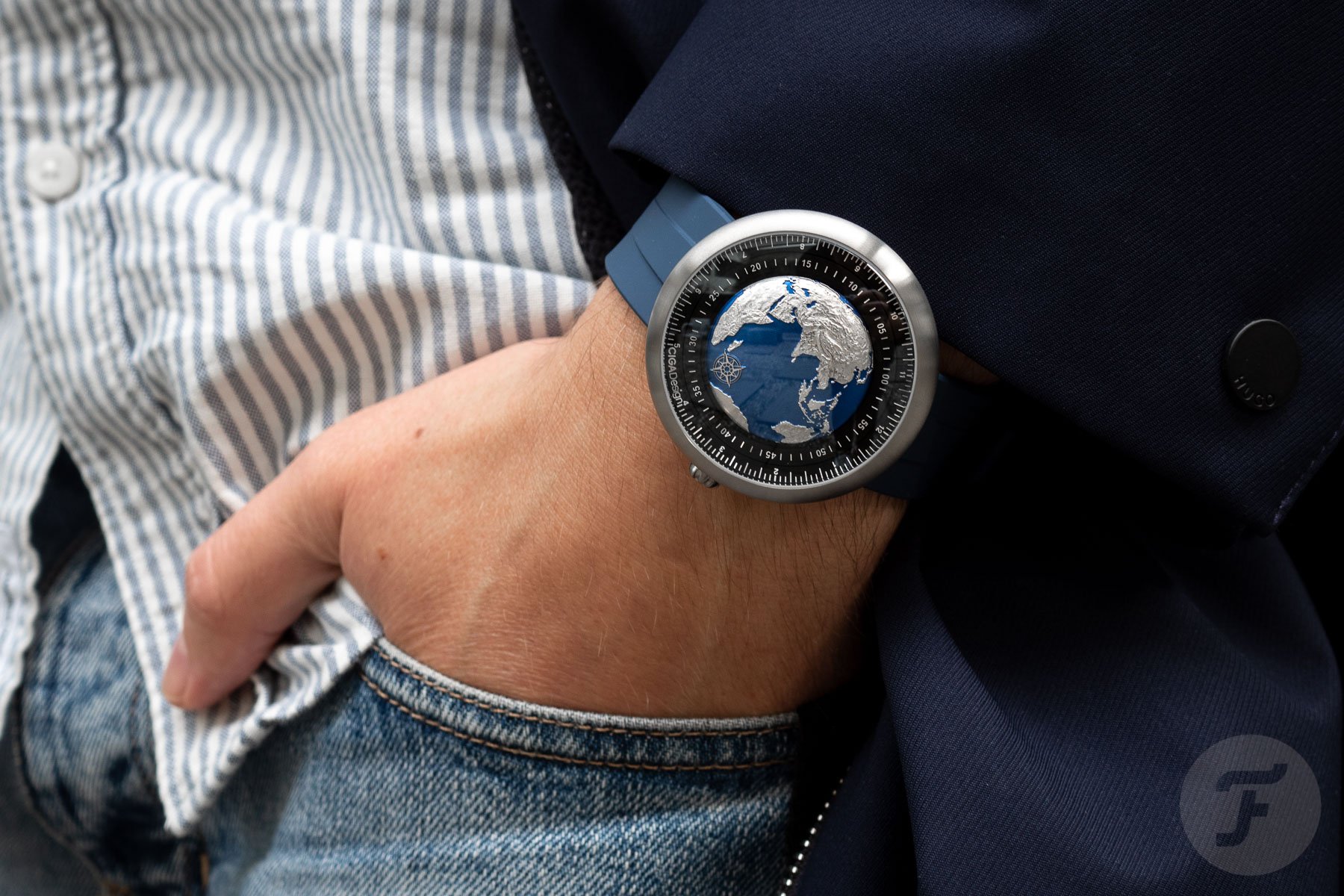 Not that big and plenty comfortable

On the wrist, the Blue Planet wears wonderfully. The soft curve of the case and supple rubber strap definitely place it on the more comfortable end of the spectrum as watches go. The titanium case keeps the ensemble light enough, yet still substantial. And although the diameter is officially 46mm, with no lugs to speak of, the Blue Planet wears as well as any mid-size watch with a similar lug-to-lug measurement. I have a smaller wrist and didn’t experience any discomfort or overhang. 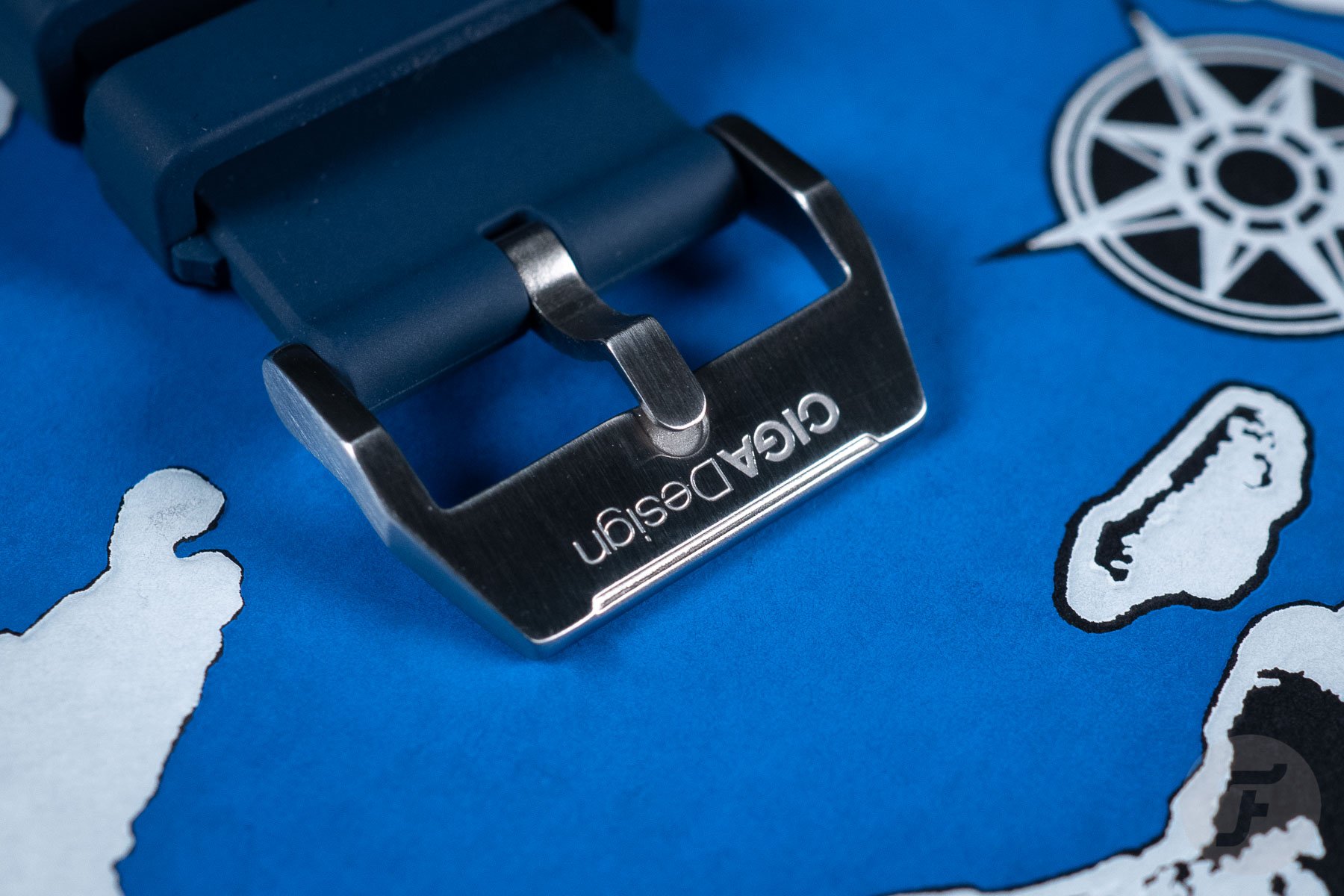 The matching titanium buckle on the strap is stamped with the CIGA Design wordmark. The strap also comes with two matching rubber keepers. At first, the one closest to the buckle seemed to be fixed until I realized it was held in place with small raised notches on the strap. This allows for both keepers to float freely if one wishes, another unique design consideration. 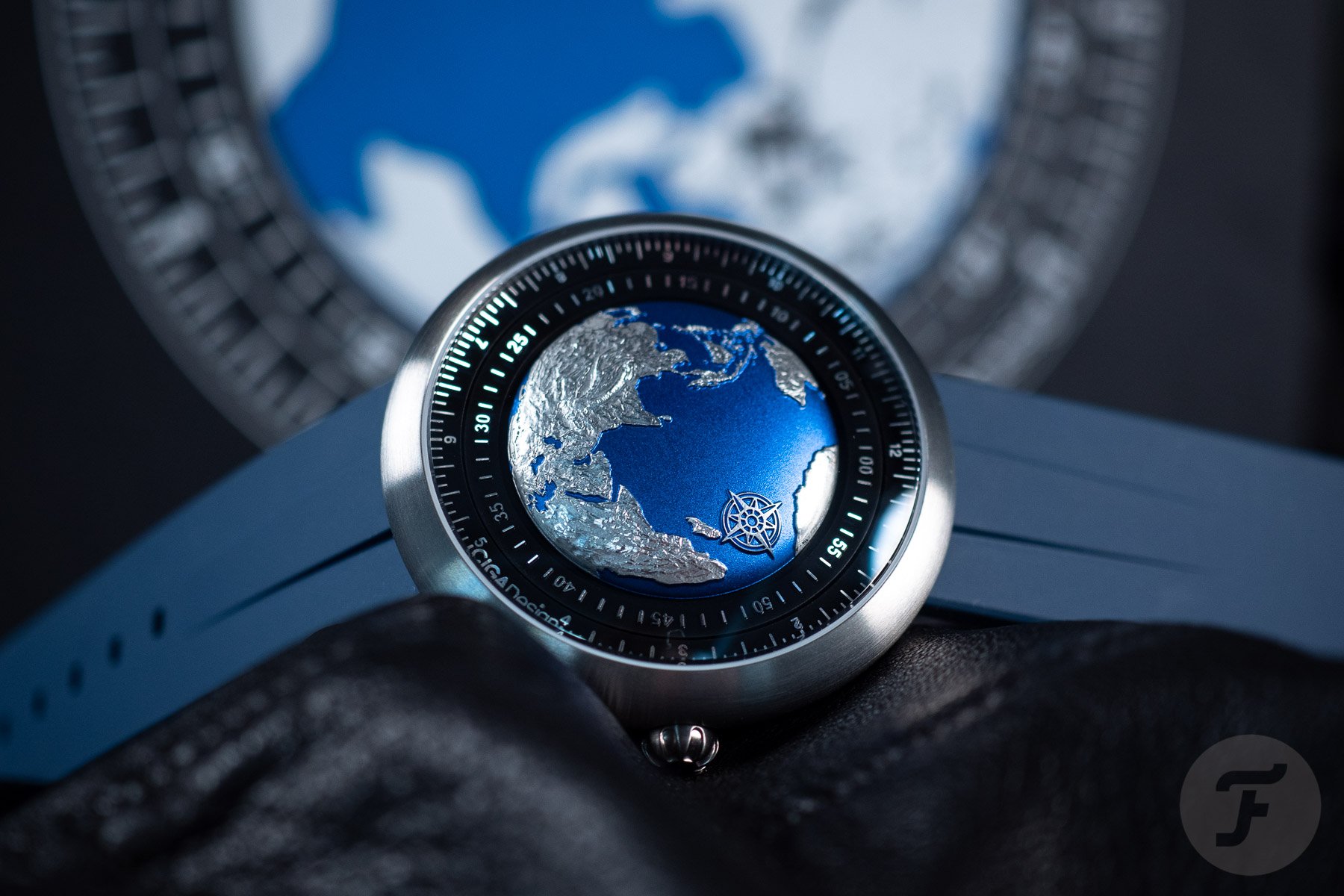 Unfortunately, the Blue Planet only has a water resistance of 3 ATM. I would love to see what the sapphire crystal over the globe looks like underwater, but not at the expense of the watch’s functionality. But the water resistance is fitting for the design. This is a statement watch, not a tool watch. In the arenas it’s best worn in, this level of water resistance is plenty. 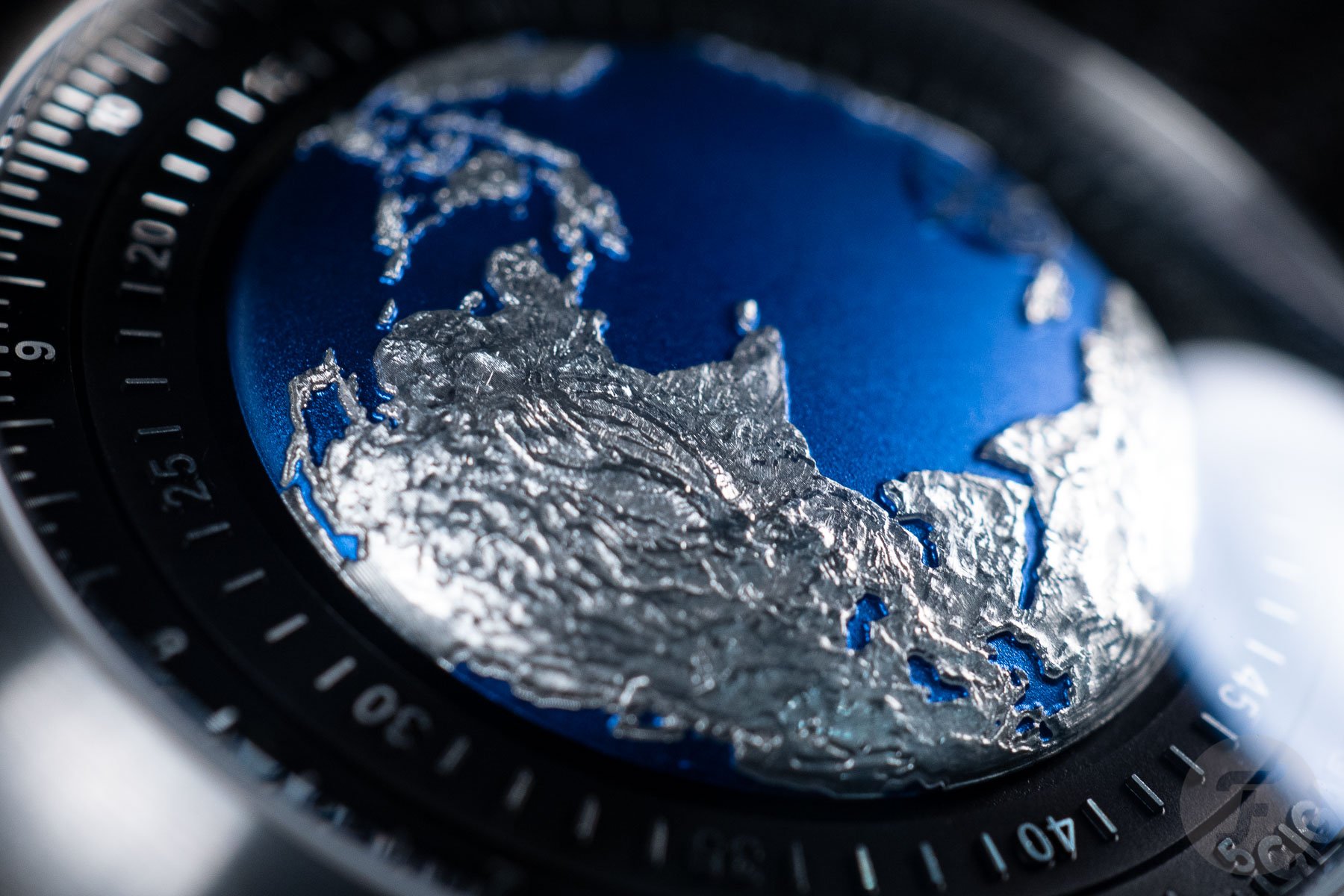 My only actual gripe regarding the Blue Planet is the dead date position when pulling out the crown. For as unique as the mechanics of the watch are, I was reminded that it may be nothing more than a module set over a basic workhorse caliber every time I pulled the crown out. I wanted to stay seduced by the main show of the watch, which is all dial-side. Unfortunately, the phantom date interrupted that experience.

I would’ve loved it if the globe rotated once every 24 hours as well. The rotation would not be accurate to Earth’s actual movement with the vantage point chosen for the Blue Planet, but it would’ve taken the metaphor and the mechanics just that one step further. 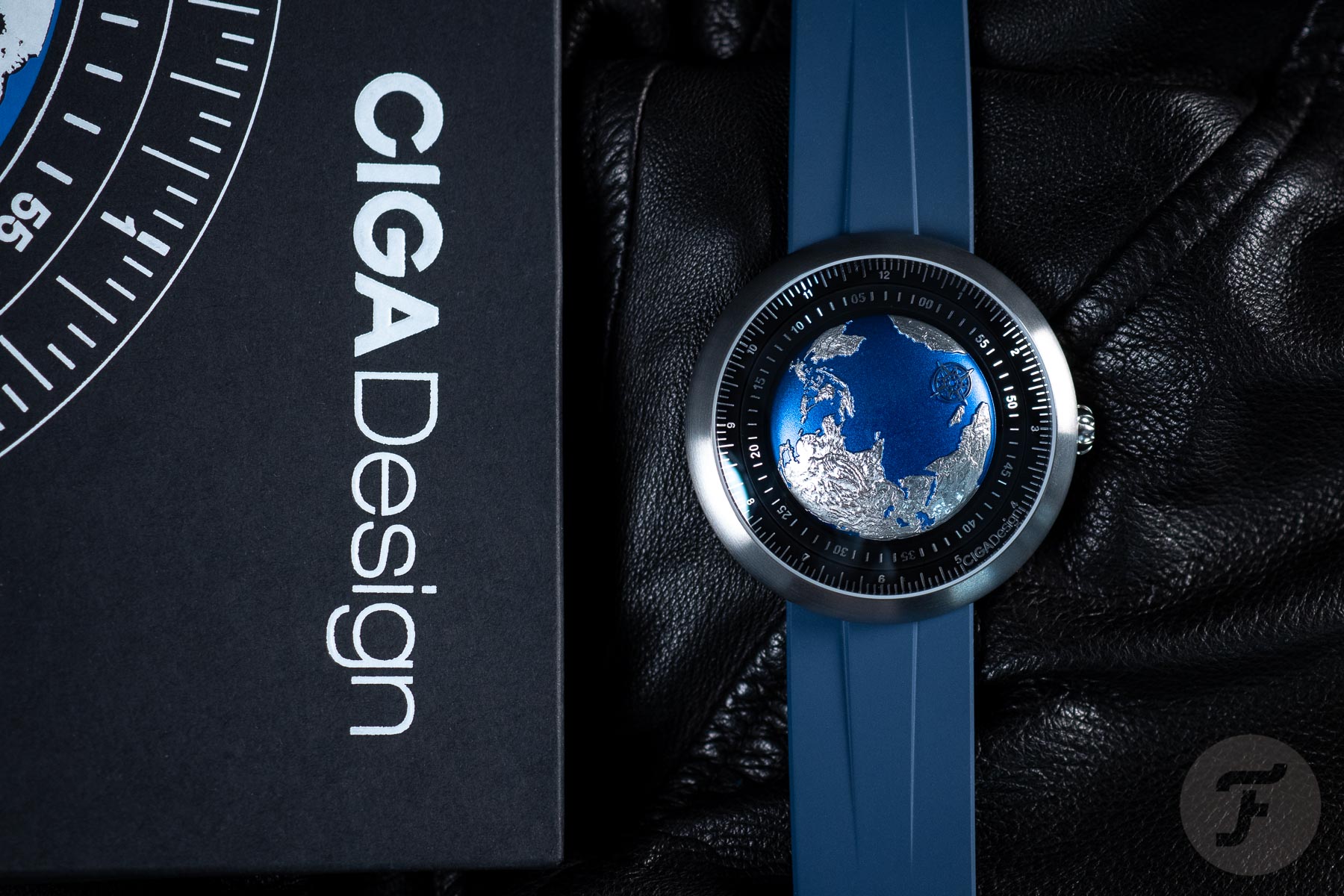 It’s not often we set aside a section of a review for a watch’s packaging. I think it’s merited for the Blue Planet. What I received was a flat, wide box that looked like it might house a tablet. Inside was a book — an actual book — slipped inside a tasteful sleeve with “CIGA Design” and an embossed image of the Blue Planet’s dial on it. The first pages of the book reveal images of our planet and a poem about the magnificent phenomenon that is the existence of Earth and us on it. The second pair of pages is completely covered in the phrase “Mankind has only one Earth” translated into countless languages. There’s a window through the page to the watch below. 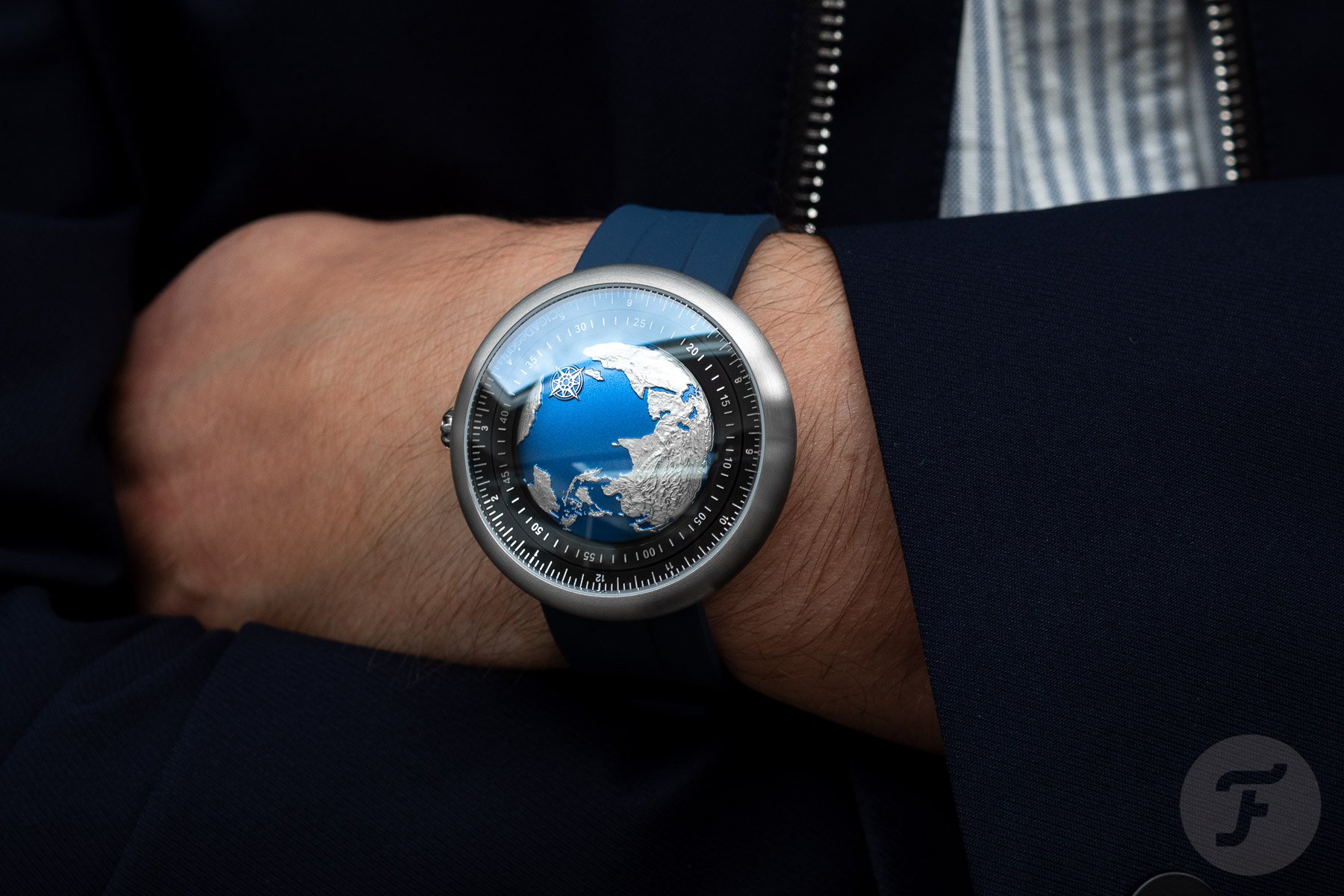 The rest of the book is the presentation box for the watch with pages fused to form a solid structure. It’s excellently executed. The watch firmly nestles into place. The back has a few more actual pages detailing the specifications and operating instructions for the watch. Overall, the experience of receiving the watch in this context only added to the “story” that CIGA Design is trying to tell with the Blue Planet. 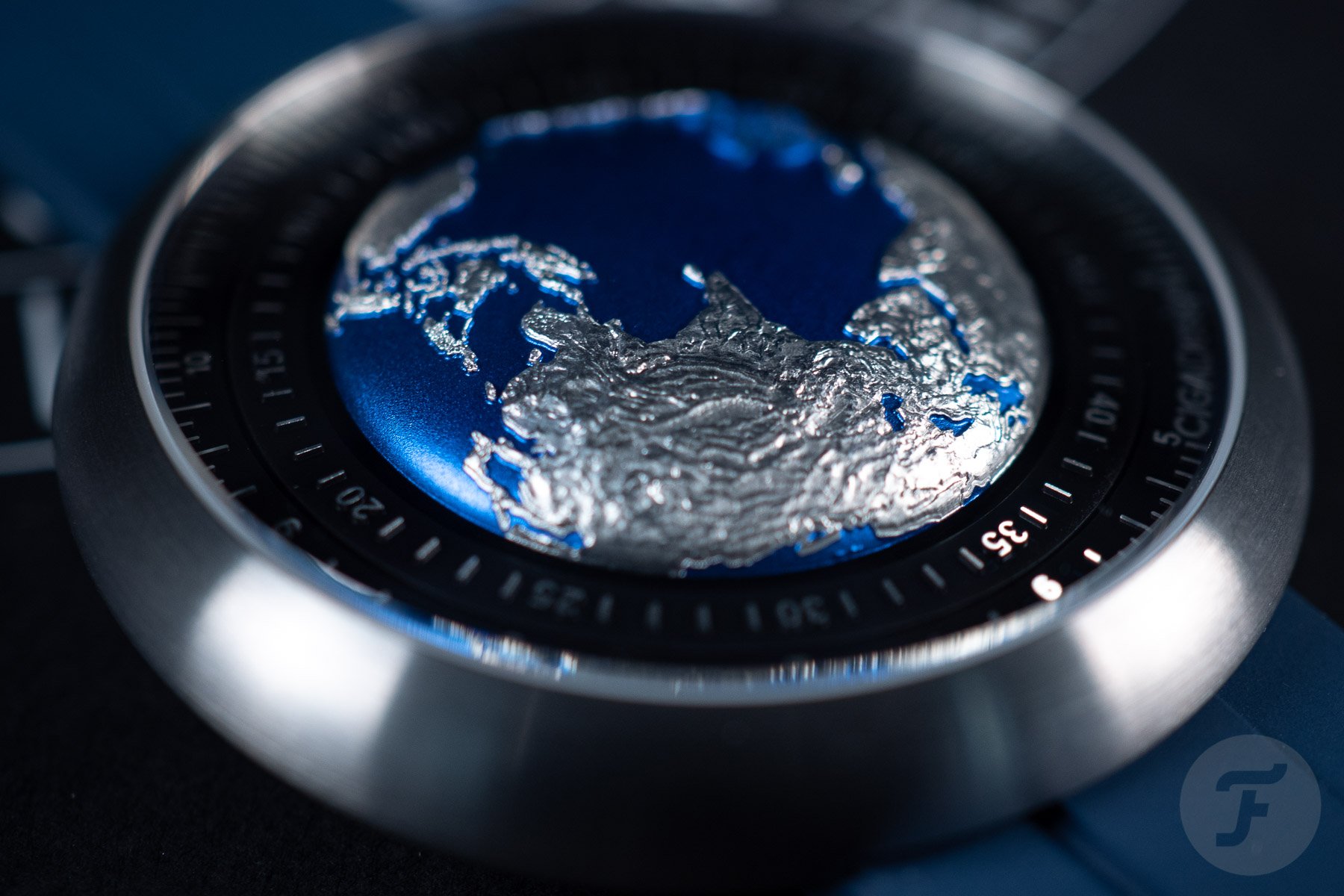 The message is almost there

CIGA Design notes environmentally friendly packaging on its website. While the book the watch came in is mostly paper, it was secured in its box with foam. There’s no indication that the foam is recyclable or biodegradable, so I have to assume it’s not. This would not be as big an issue if it wasn’t in relation to a watch that is doing its best to spread the message of the beauty, wonder, and, ultimately, the fragility of the Earth.

And, yes, I know it’s fine for a watch to exist for its own sake. That said, I would’ve liked to have seen some sort of effort made towards actually affecting some good in the world on CIGA Design’s part beyond making such an Earth-centric watch. Perhaps the message is enough in this case. At US$1,099 in titanium, the money not put towards environmental or humanitarian causes seems to directly translate into a good deal for the consumer. 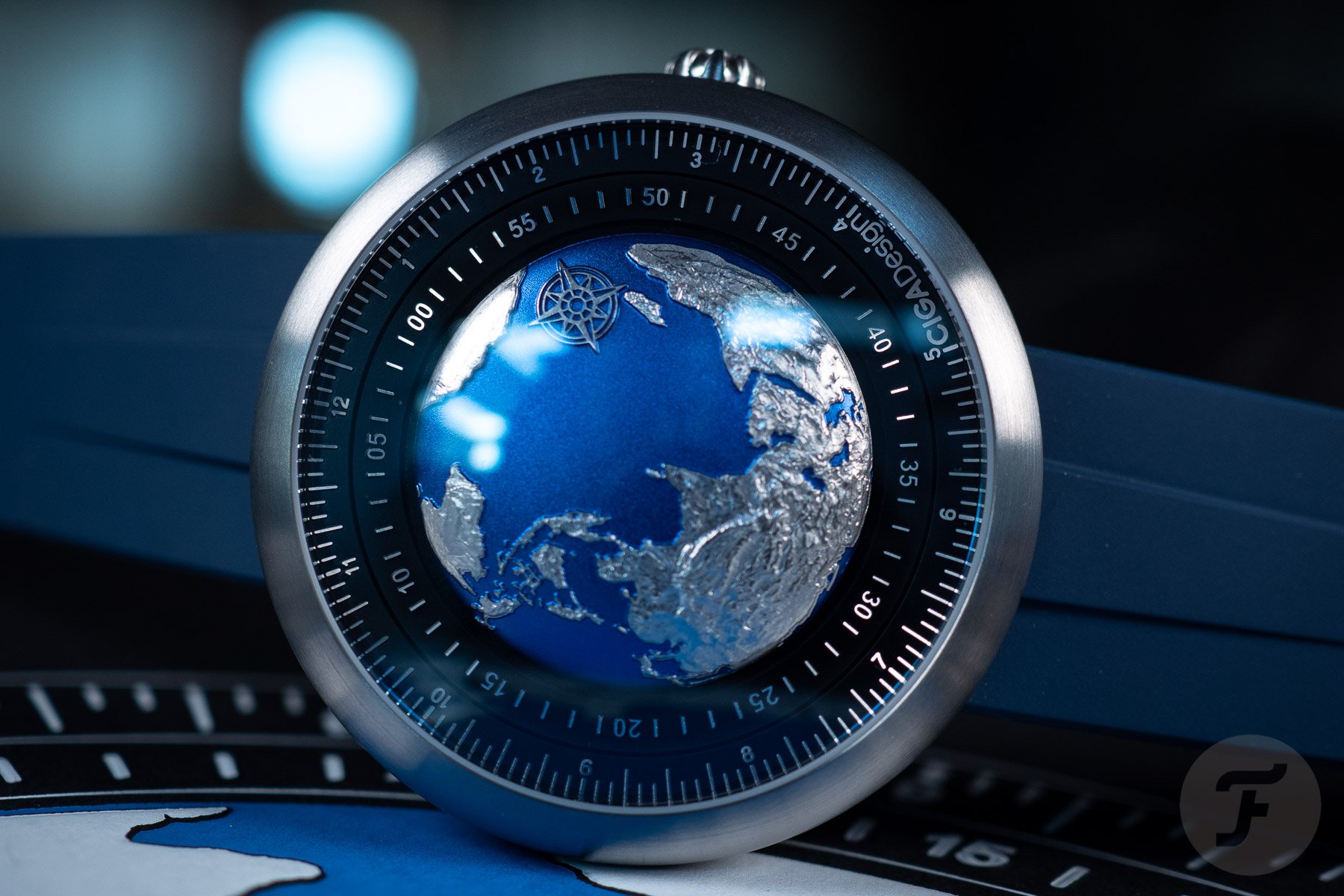 The CIGA Design Blue Planet does one thing and does it exceptionally well. There’s a reason it won an award. It’s a striking watch with an obvious and powerful message — Planet Earth. That’s a broad statement that CIGA Design has eloquently wrapped up in a sentence no bigger than 46mm. If Earth means quite a lot to you — whatever the specifics of that may be — and you want to show it or at least be constantly reminded of it, the Blue Planet is for you. For me, it was enough to feel vaguely like an astronaut or alien gazing at Earth while wearing it to convince me of the watch’s merit and message. You know, the world is small, and time is fleeting. It’s not bad to spend your time smiling, which the Blue Planet certainly caused me to do.

You can find more information about the Blue Planet and the brand behind it on CIGA Design’s official website.

You can also find more of me on Instagram: @WatchingThomas