Hands-On With The Batavi Geograaf — Get Ready To Travel In Color!

Could these be the best GMT and worldtimer watches available for the price?
Daan de Groot
comments 5
Share

Most brands tend to stick to the usual black, white and occasional blue for their dials. Well, not Amsterdam-based Batavi! The brand’s previous Architect and Kosmopoliet GMT were known for the colorful dial options. And now, Batavi is taking to Kickstarter once again, launching the Geograaf in both a GMT and Wereldtimer (“worldtimer” in Dutch) version. And as we’d expect, all four options feature some funky color combinations. Let’s take a look at the third member of the Batavi family.

Did you miss out on Batavi’s previous Kickstarter campaigns? Are you not yet familiar with the brand’s previous models? In that case, let me just tell you straight away that Batavi offers you a lot of bang for your buck. Nacho already went over most of the specs of the Geograaf in his hot take. But what would you expect a GMT or worldtimer to cost? Especially when I tell you it has a Swiss-made Soprod movement, a quick-release bracelet, 200 meters of water resistance, and a sapphire crystal on both the front and the back? Please write down your answer now, and we’ll get back to the price at the end of the article. Let me first tell you what my hands-on experience with the Geograaf was like! 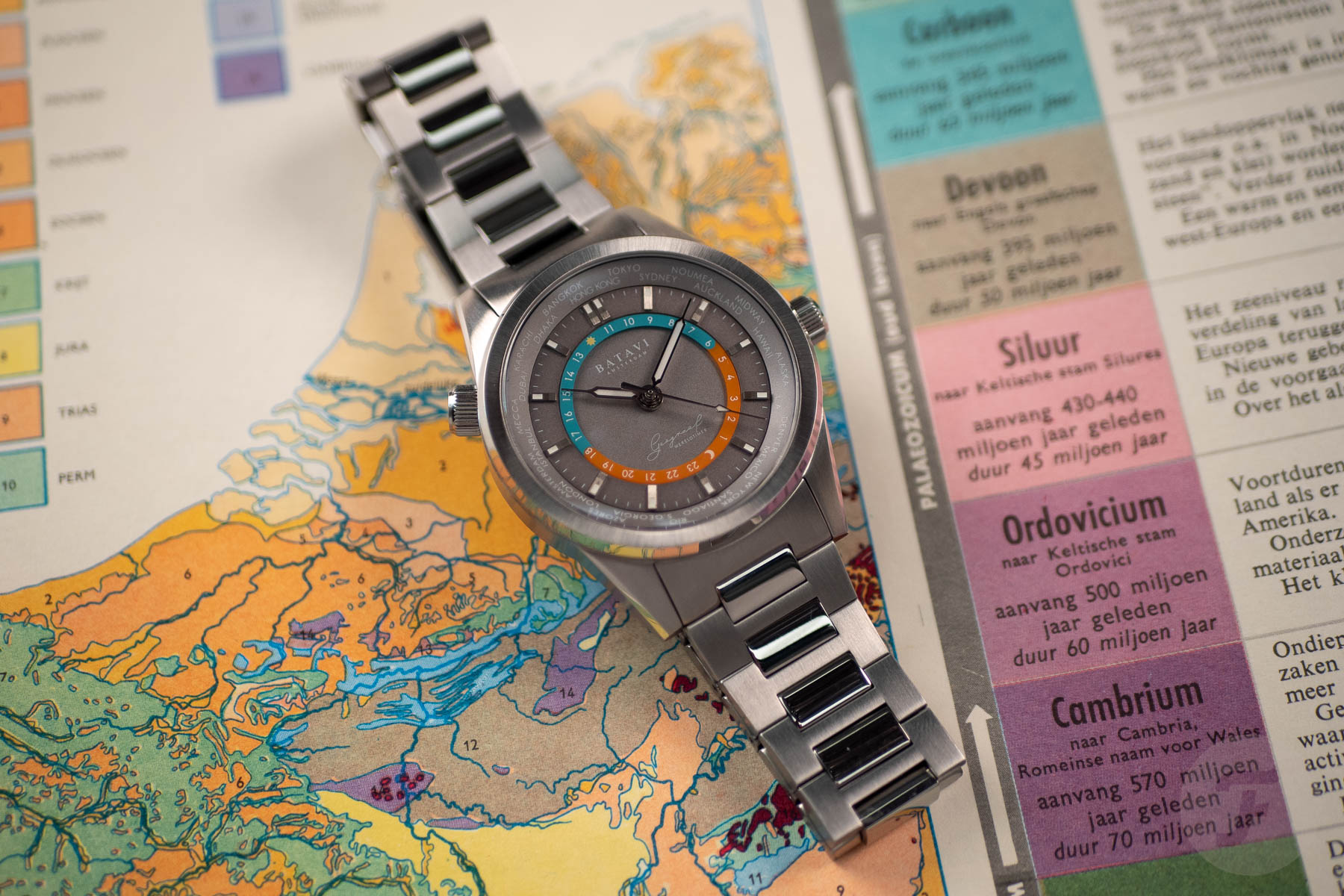 The case of the Batavi Geograaf is the same case that was used for the previous Kosmopoliet model. With its 39mm diameter, 48mm from lug-to-lug, and 13mm height, I’m sure it’ll be a comfortable watch to wear on many types of wrists. Whereas the Kosmopoliet had a fully polished case, the new Geograaf has an almost fully brushed case. Only the chamfers on the lugs and on the bezel are polished. This combination of finishing gives the watch a sportier appearance and makes it more interesting to look at. The Kosmopoliet was also a GMT watch, but Batavi decided to do things a little bit differently this time. 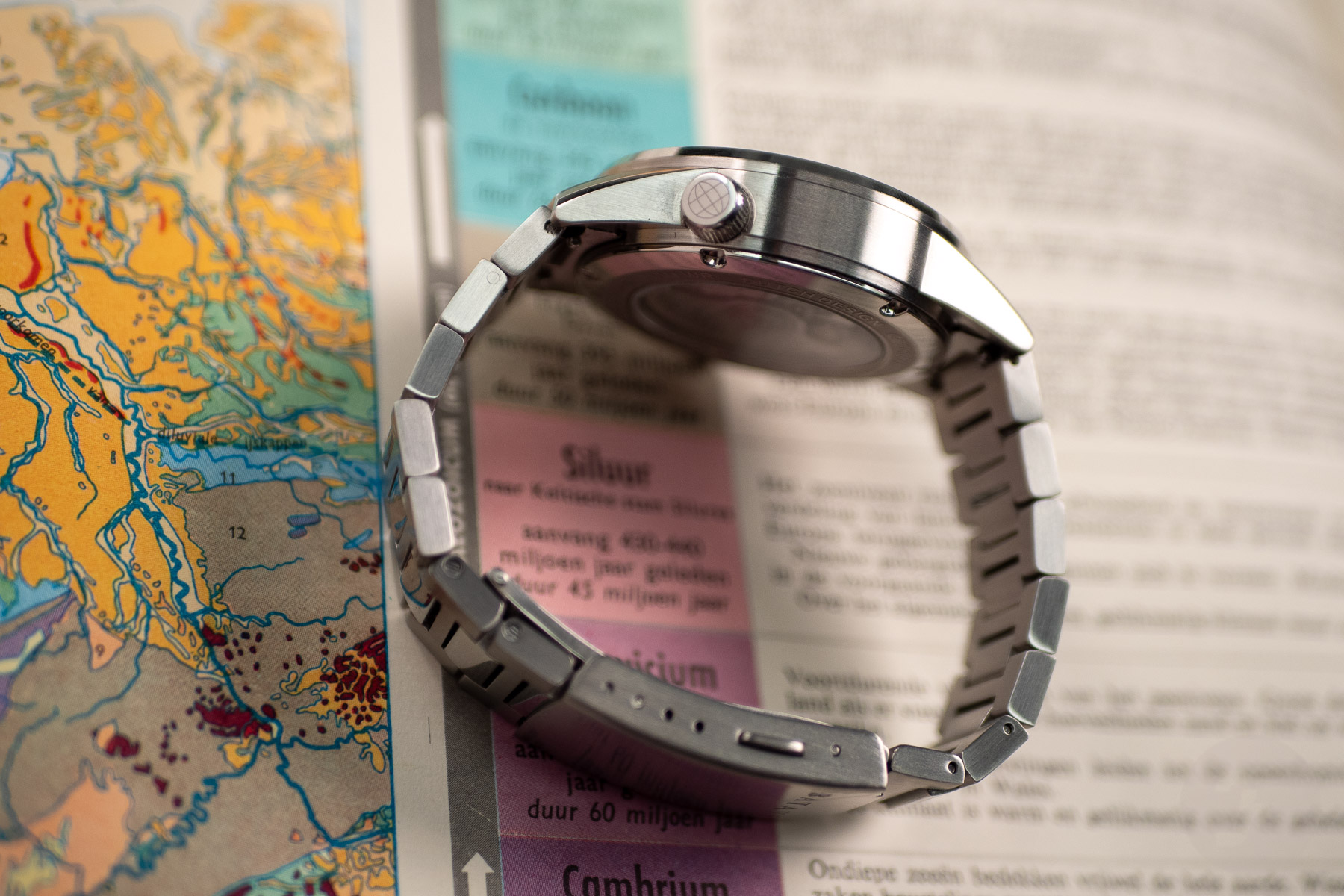 Instead of an external bezel and a traditional GMT hand, the Geograaf has an internal bezel and a rotating 24-hour disc on the dial. The GMT version of the Geograaf has a 12-hour scale on the internal bezel, while the Wereldtimer version comes with the typical metropolises often found on worldtimers. But whereas most worldtimers use Paris to indicate the GMT+2 timezone, the Geograaf logically swaps it for Amsterdam. For me, as someone who was born and raised there, this is certainly a nice variation! On both models, the internal bezel is operated through the second crown, which is positioned at 10 o’clock. A nice touch is that this crown is signed with the symbol of a globe in accordance with its function. On the GMT model, the 12-hour internal bezel can be used to display a second timezone. Now, let’s look at that rotating disc in the middle of the dial to track additional ones. 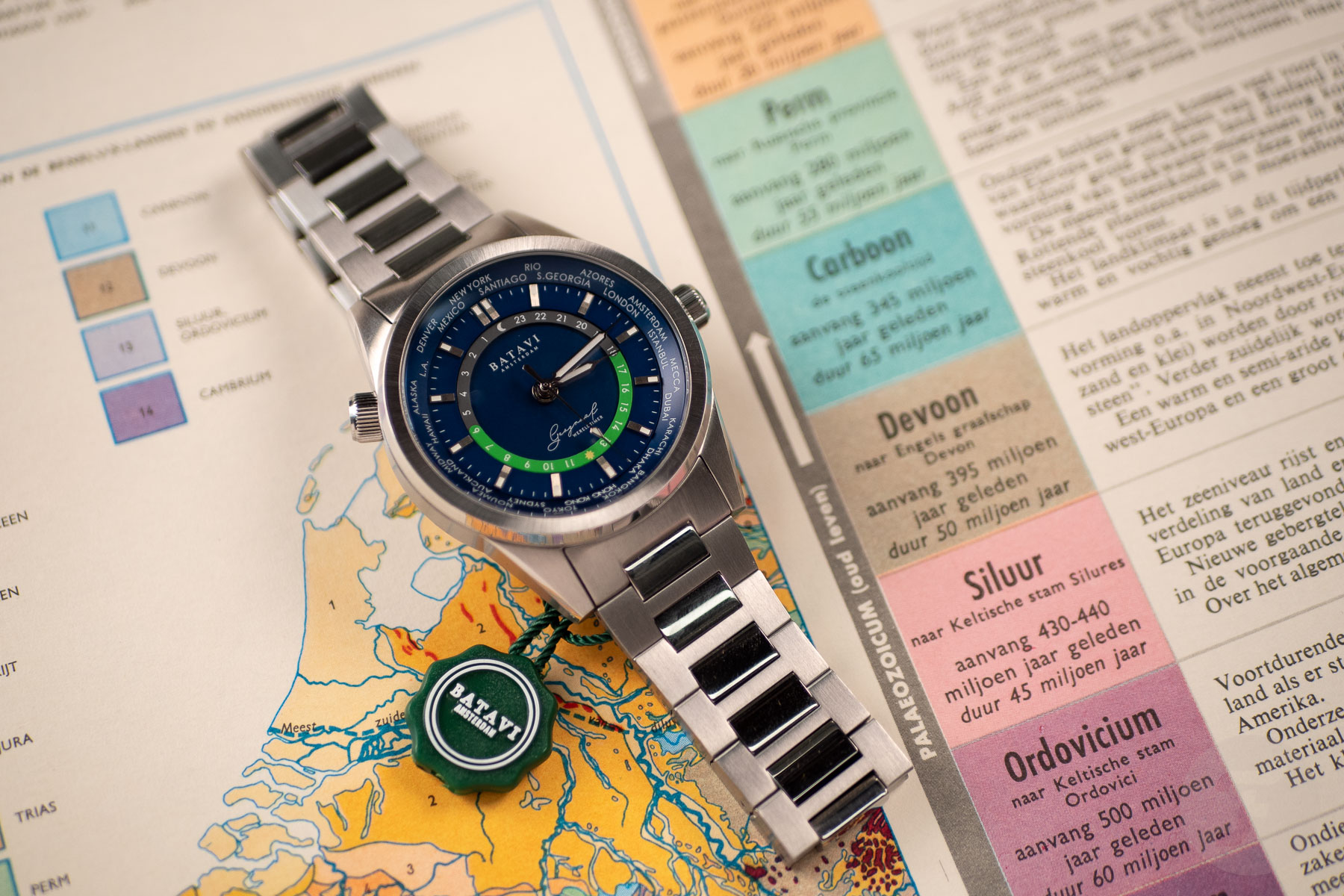 All four of the available Geograaf models come with their own colorful rotating 24-hour disc, which the wearer can adjust via the crown at 3 o’clock. It can be used to track a third timezone on the GMT model, and in conjunction with the city ring to display the time all across the globe on the Wereldtimer model. On the gray-dialed Wereldtimer, the disc is orange and turquoise. The blue-dialed Wereldtimer comes with a rotating disc in dark gray and green. The silver GMT, which is actually my favorite, comes with a disc with two shades of pink. Finally, the salmon GMT, which we didn’t get in for pictures, comes with a disc in two shades of blue. I think it’s great how Batavi was able to incorporate the colors into the design. 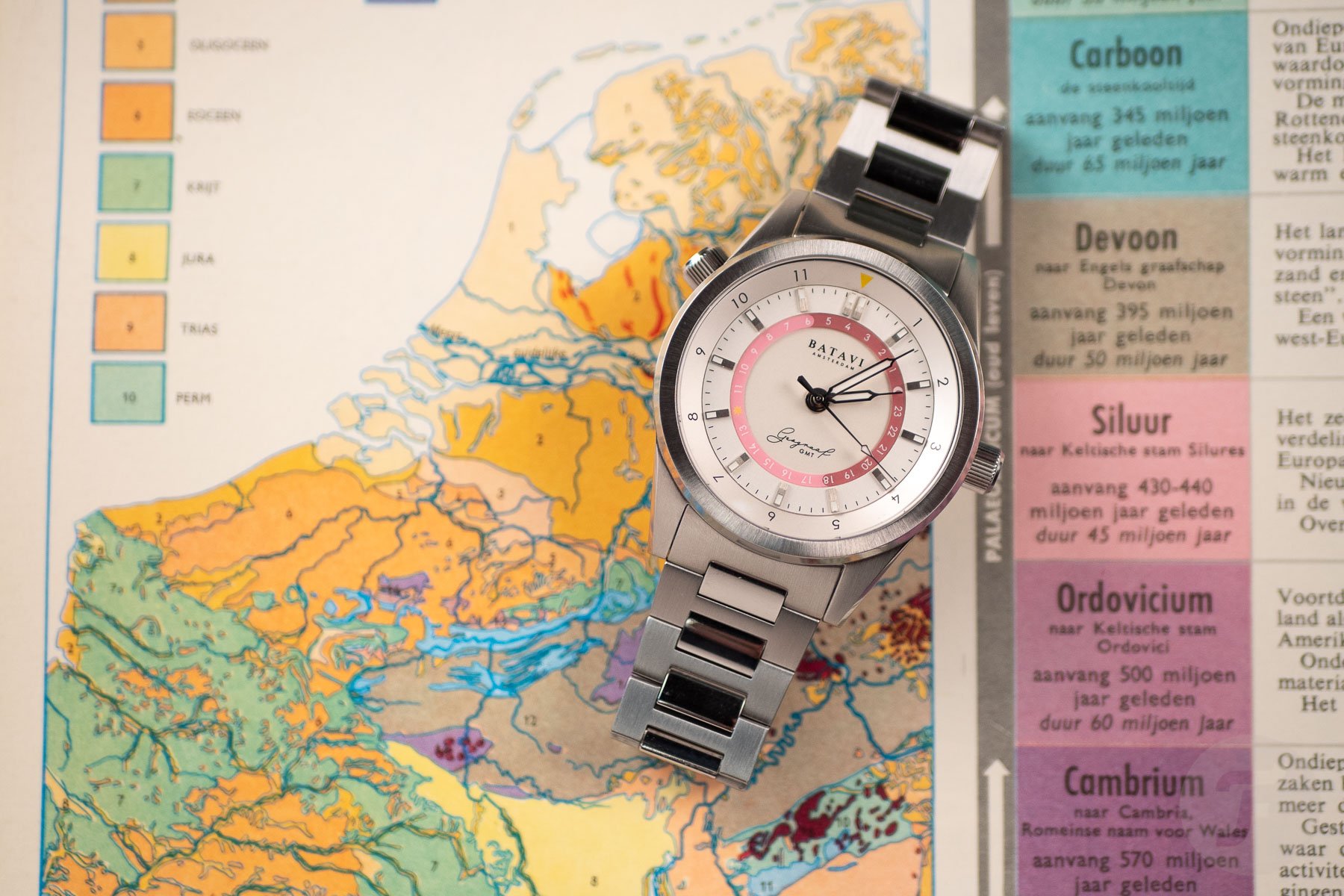 The base colors of the dials aren’t even that original. But adding those colors on the 24-hour disc gives the Geograaf a totally different and original look. And, although there’s a lot of information on the dial, it’s not too busy or too loud at all. The syringe hands are very legible, and they add some elegance to the overall clean design. They’re also filled with Swiss Super-LumiNova, just like the applied hour markers. And through the screw-down exhibition case back, you’ll see the automatic movement ticking the seconds away. 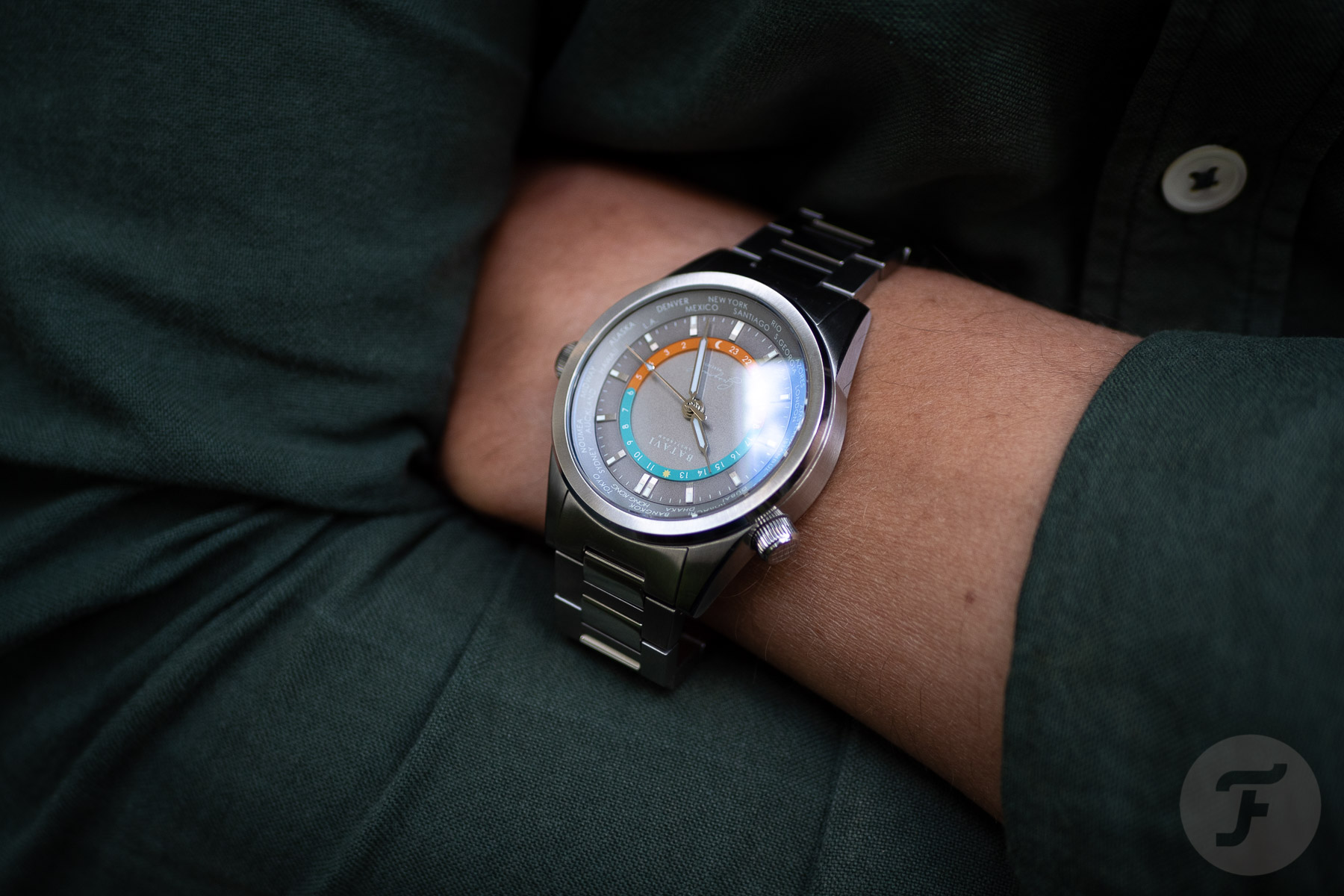 The Swiss-made Soprod C125 caliber will give you 42 hours of power reserve at 28,800vph. It also offers hacking and hand-winding, and winds automatically in both directions. I mean, it’s not an ETA or Sellita movement, but you see these Soprod movements popping up more and more. So far, I haven’t heard any big complaints about them. Another thing I can’t complain about is the Geograaf’s bracelet. 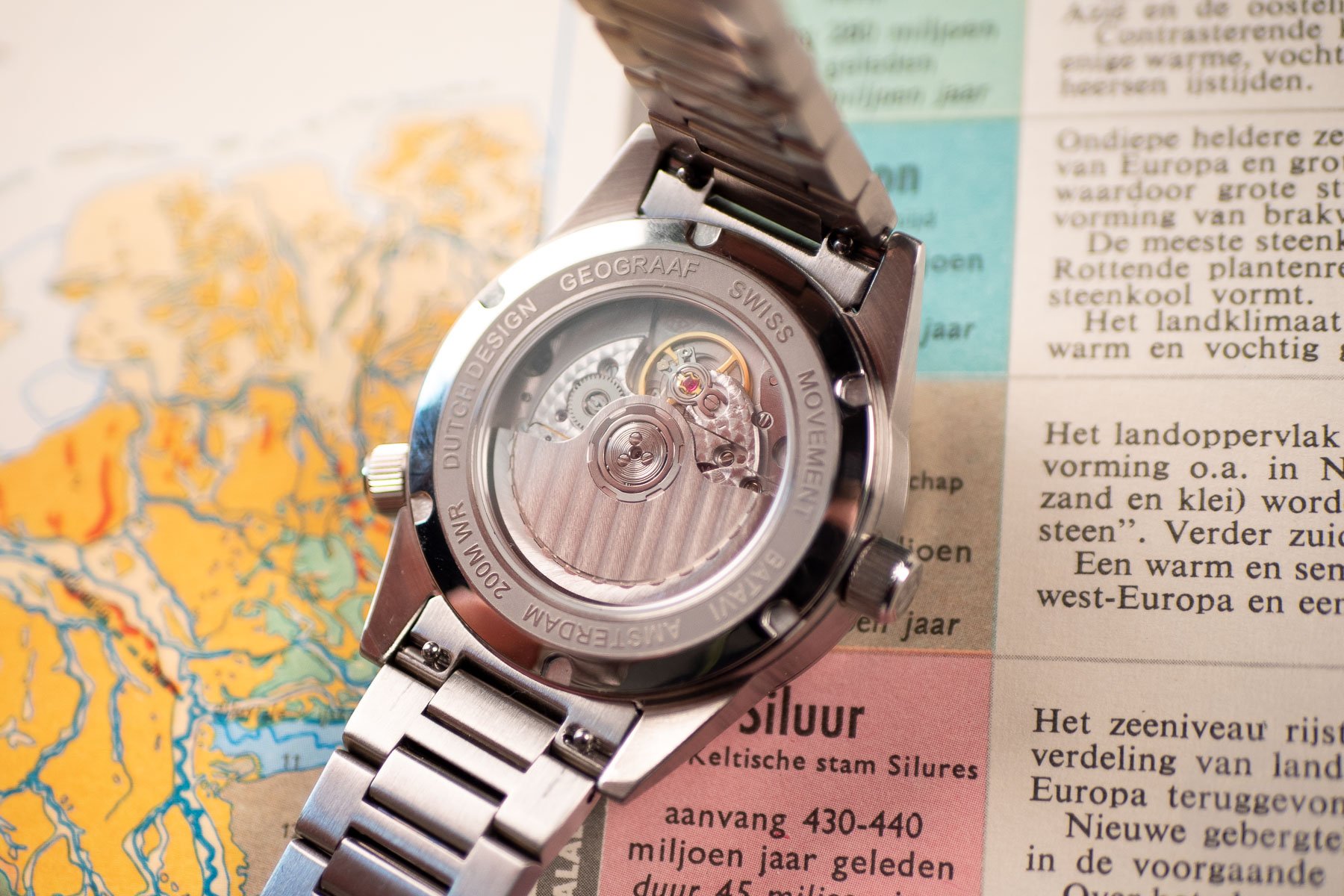 It’s an H-link bracelet that is both brushed and polished, perfectly matching the case of the watch. The bracelet tapers from 20mm at the lugs to 18mm at the clasp. The clasp itself is a milled, single-fold deployant with a dual-pushbutton release mechanism. The whole bracelet feels hefty, articulates nicely, and matches the rest of the watch very well overall. Oh, and I almost forgot, it comes with quick-release spring bars. So whenever you’d like to swap it out for a different strap, you can do so in a second. What more do you need? 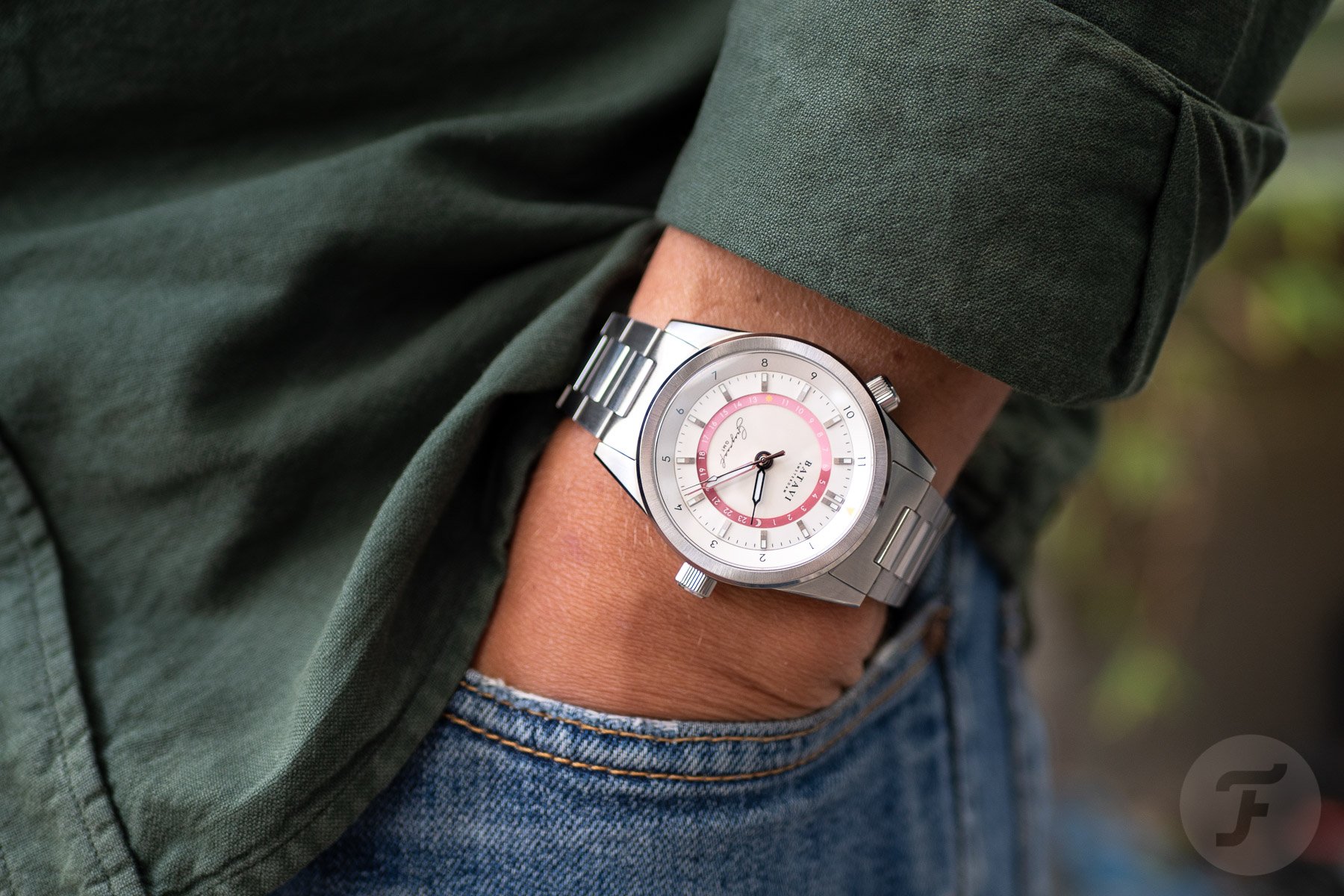 The best mechanical travel watch for the price?

Now, let me see those answers to the first question I asked you. What did you think the Geograaf would cost? I bet you didn’t think of as little as €649 (Early Bird pricing). I don’t know many other GMT or worldtimer watches out there that offer the same package for such a low price. And even the eventual list price of €849 is quite a bit lower than the other (microbrand) options out there. I did think about adding a more affordable GMT watch to my collection in the past. Examples from Baltic, Christopher Ward, Yema, and Unimatic have been on my list. But all of these brands ask higher prices for their travel watches than Batavi does. At least on paper, it’s hard to determine what the others have to offer to explain that price difference. A date window, maybe?

With the Geograaf GMT and Wereldtimer, Batavi offers a watch that wears nicely on the wrist with a great design and a Swiss automatic movement. So, is this really the best mechanical travel watch for the price (as Gerard explained, Batavi can very freely be translated into “the best”)? I’m not sure about that yet. But I do know that the ones we had in the office looked very promising! 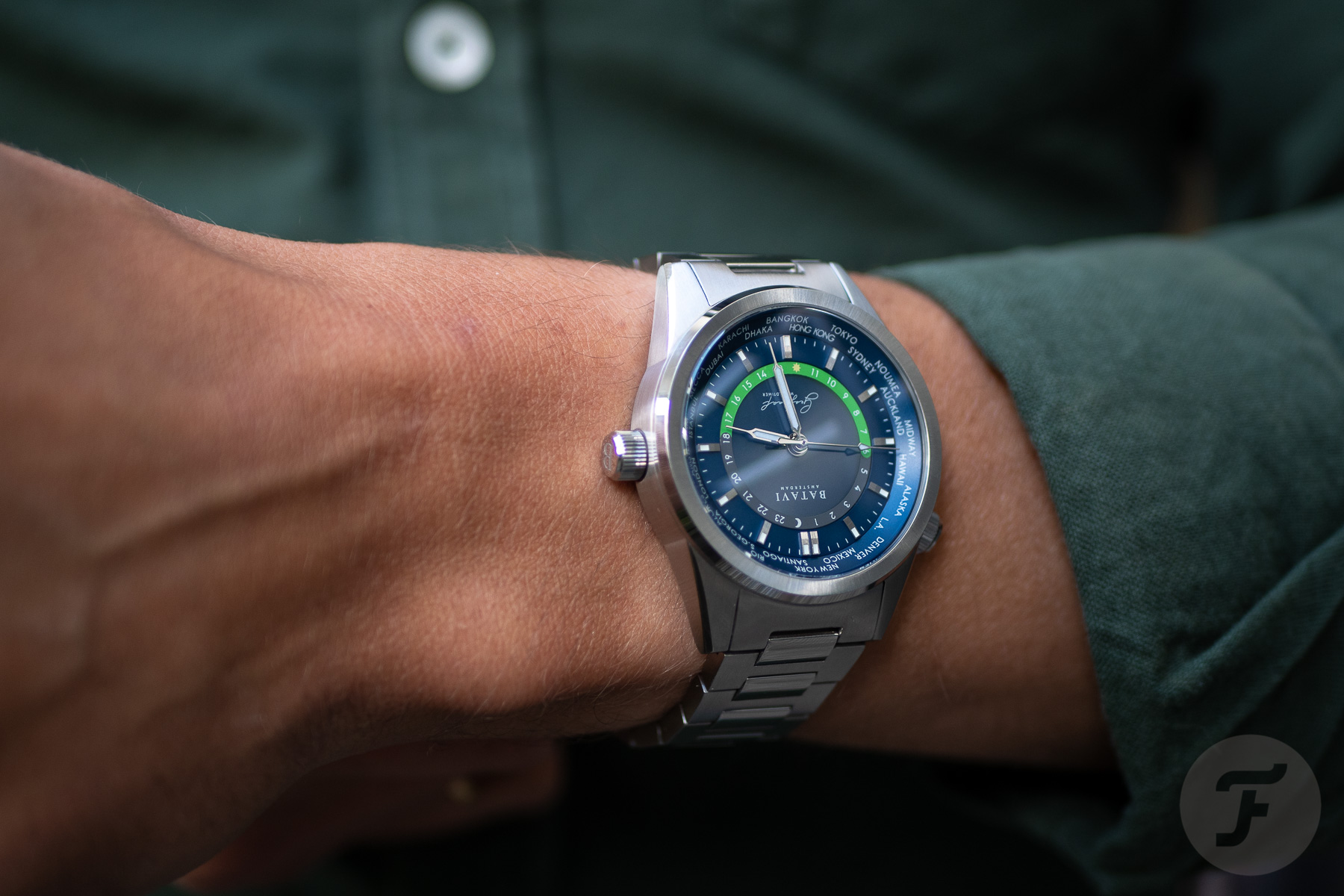 The Batavi Geograaf GMT and Wereldtimer are live now on Kickstarter. At the time of writing, the Early Bird reward has already sold out, but there are still other rewards available at a reduced price. You can find all information on the Kickstarter website.

What do you think of the Batavi Geograaf GMT and Wereldtimer? Do you agree that it could be the best automatic travel watch for under €1,000? Let us know what you think in the comments.