The resemblance to the legendary Rolex Explorer 1016 is undeniable. After a week on the wrist with the prototype, I see more than a distinct expedition legend. The Davosa North Pole has self-esteem and ice in its veins. Its clinical charisma has won me over. We spoke to the man who is the brain behind this 500 pieces limited collection.

“I was always fascinated by stories or events, whose details remain unclear or mysterious,“ says watch designer Mario Gaspar. When I asked him which explorer is depicted on the majestic case back engraving, he replied, “I don’t know.”  I was understandably confused. 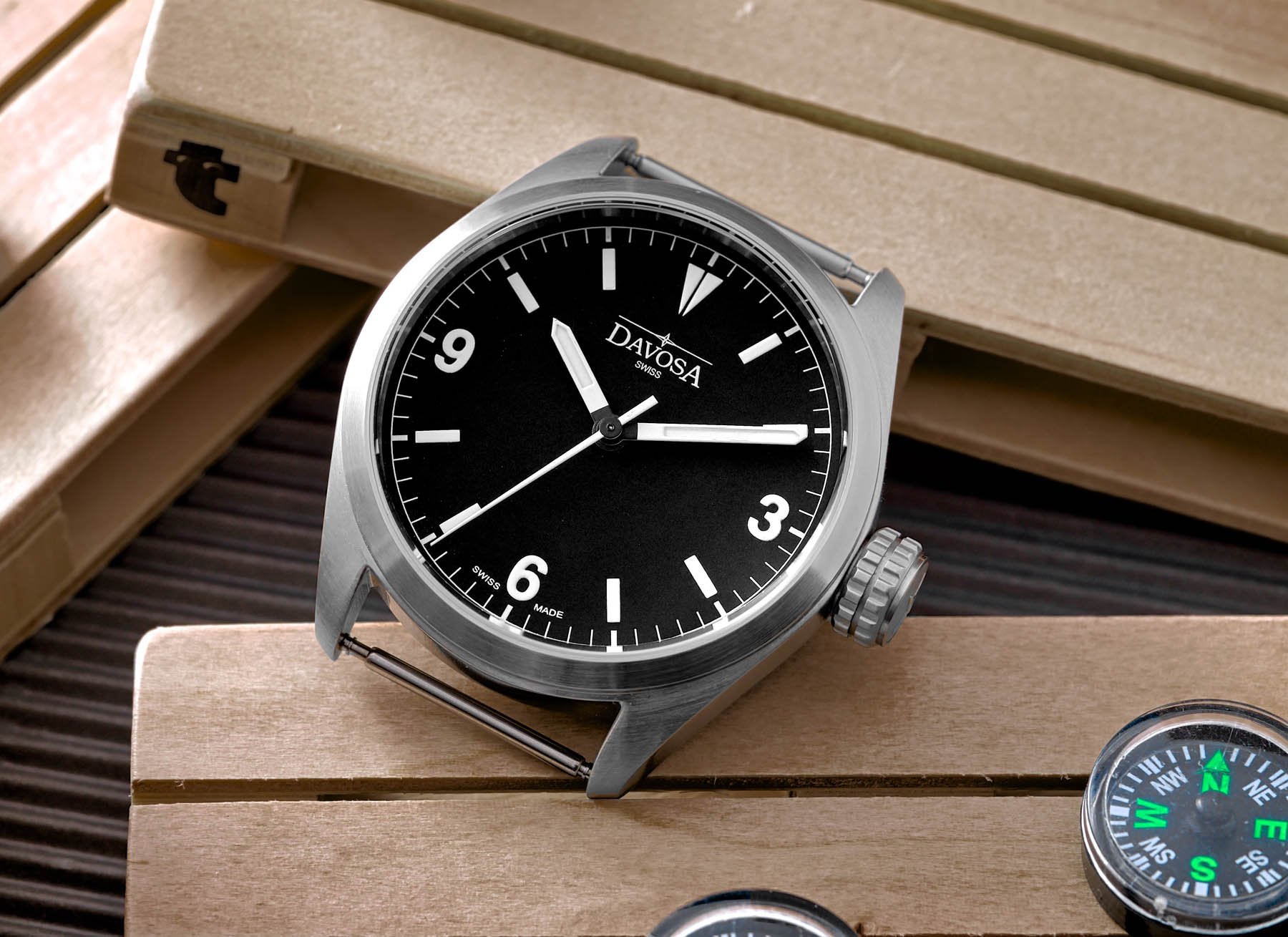 The first undisputed expedition to reach the North Pole was that of the airship Norge, which flew over the area in 1926. It had 16 men on board, including expedition leader Roald Amundsen. “But explorers and adventurers had tried to reach the North Pole since the late 19th century. There were at least three prior expeditions, but they all struggled with accuracy. Some were probably never documented or their details just haven’t been preserved. This watch celebrates exactly those people. The heroes, that stay in the shadows and never get credit for their endeavors,” explains Mario while rolling his finger over the engraving on the prototype.

I’ve known of Davosa since my university studies. I was looking for a dressy watch with a power reserve indicator and Davosa was on my shortlist. Well, the budget was my greatest inspiration and limitation back then. Since that intermezzo, I haven’t heard much about Davosa. That was until a few weeks ago when news about the upcoming North Pole Limited edition reached me. As a vintage watch fan that has his own pleasant memories of Davosa, I was intrigued and I asked for a prototype. Just out of curiosity. 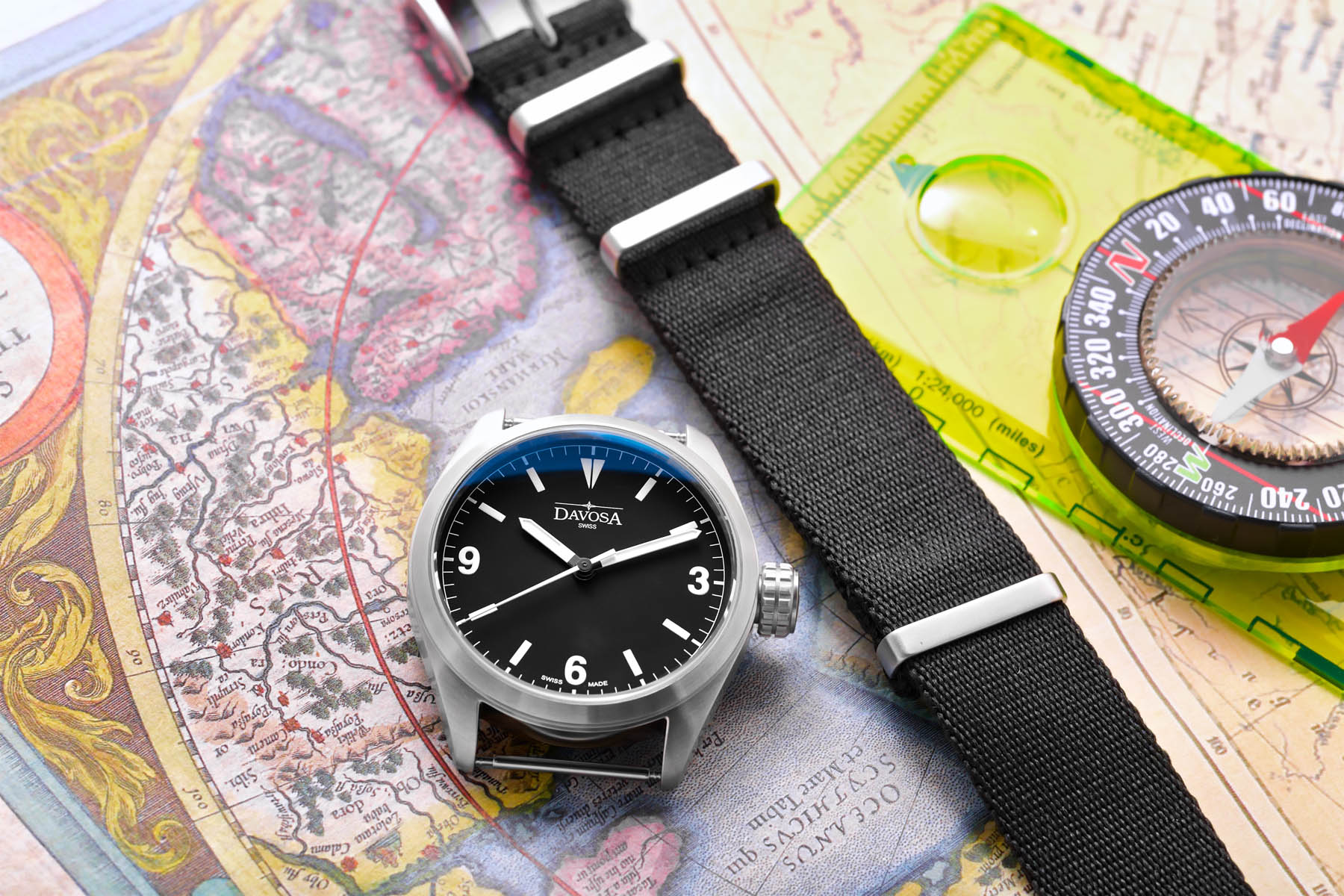 I was too busy to study materials before the North Pole reached my desk. Or, more precisely, my wrist. I have to say, I had no expectations. The moment I unboxed the Davosa North Pole and strapped it on, I got a huge wake-up call by the 42mm diameter case. That’s the funny thing about new releases re-interpreting some widely known watch hits. I know the 36mm Rolex 1016 design very well but never found myself wondering how it would look in a 42mm version. And now I had it right under my nose, in matte steel, no less!

I see a vintage Rolex aura that got pimped with a minimalistic, linear, and darker modern style.

Long story short, it looks surprisingly good! When analyzing my feelings, the main reason for this verdict is the pimped-up vintage Rolex aura. It is a minimalistic, linear, and darker modern style. The style that puts function over form, but still wants to be attractive. The more time I spent with the North Pole, the more I thought about William Massena and his collaboration with Unimatic. I see a lot of creative approach similarities between the Modello Uno U1-ML6 inspired by the Rolex 6538 and the Davosa North Pole. 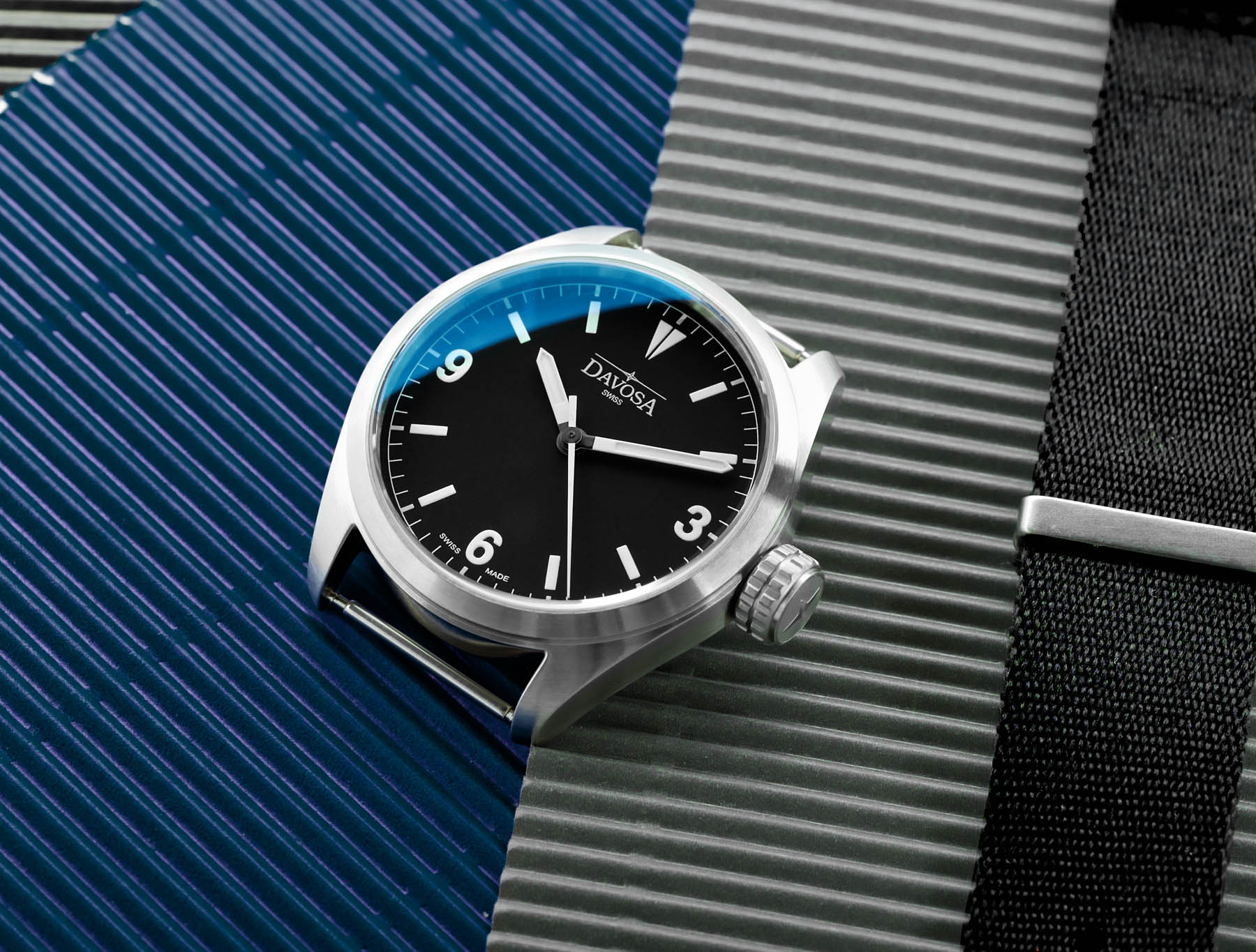 Davosa used a case from their military model with a big and wide screw-down crown. The rough crown design with big teeth assembled sparsely in two rows contrasts interestingly with the notably shorter lugs and sleek dial design. Speaking of the dial, it is a simple 3, 6, and 9 three-hander. When I mentioned the utilitarian approach, don’t expect a Mercedes hand. The long hands are just wide enough and always struck me with their cold white tone. As do the indexes and numerals with their BGW09 lume, which makes them glow beautifully. Another notable detail is the triangle at the 12 o’clock position cut in halves, creating two smaller triangles. 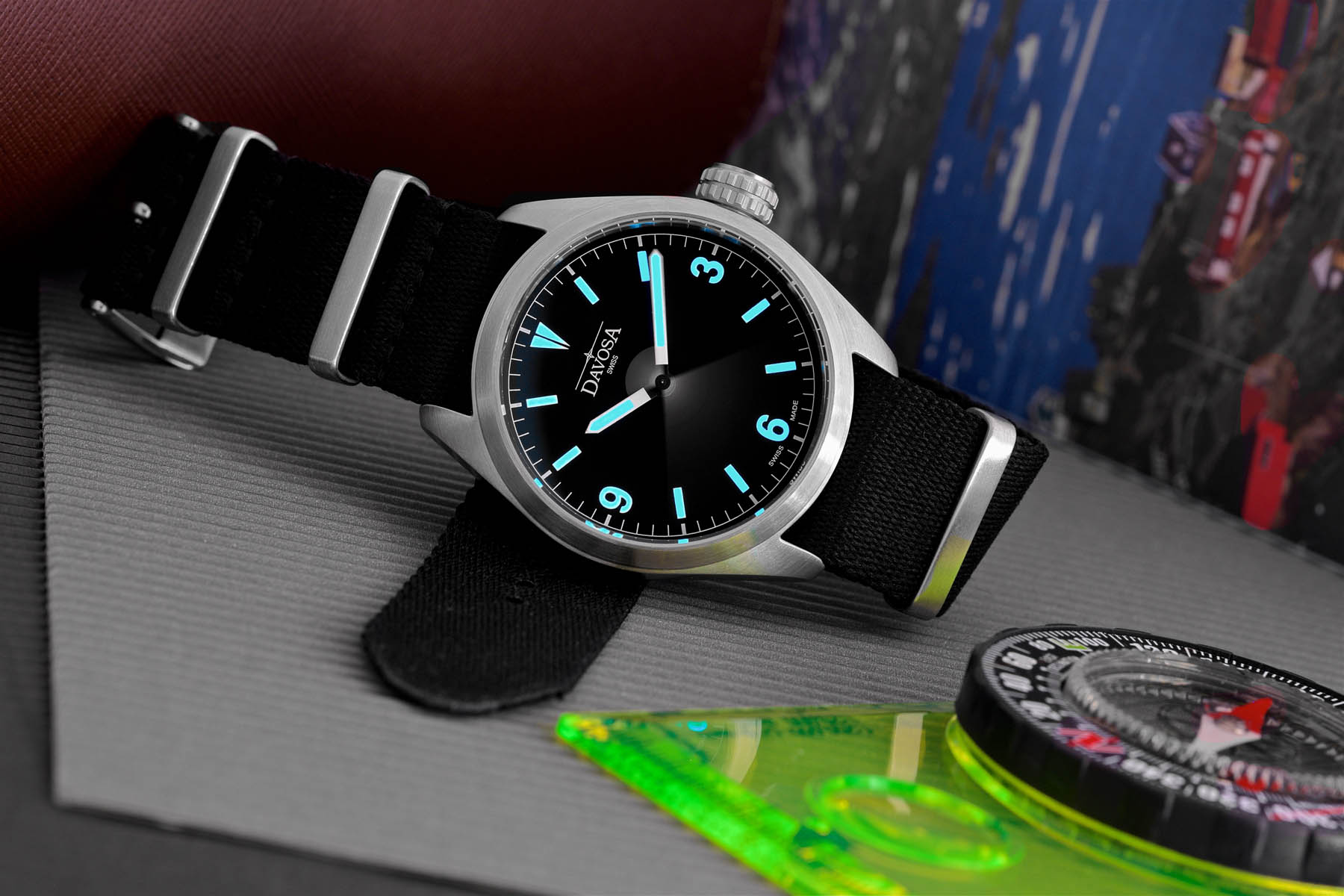 I swear I thought the dial was dark blue for the entire week. I would bet against anyone who sees the dial as matte black. Well, you would win, but it won’t stop me from seeing it as dark blue. I always propagated the idea that the more colors people see in a watch, the better for the watch. Just for the record, I don’t see it as an imperfection, but as quite the opportunity.

The case back engraving

Back to the case back protecting the mechanical caliber Sellita SW200. When I interviewed Mario and he saw I was studying it, he started to talk. “The mysterious explorer looks up at the polar sky. If you look closer, you can notice a few stars are bigger, forming the Great Bear constellation.“ And that’s not all. The constellation is captured at the 00:00 time on Christmas Eve of 2020. That view will open 30° north of the horizon from the Svalberg Islands, the northernmost inhabited corner of our planet, far beyond the Arctic Circle and roughly 1,000km away from the North Pole. 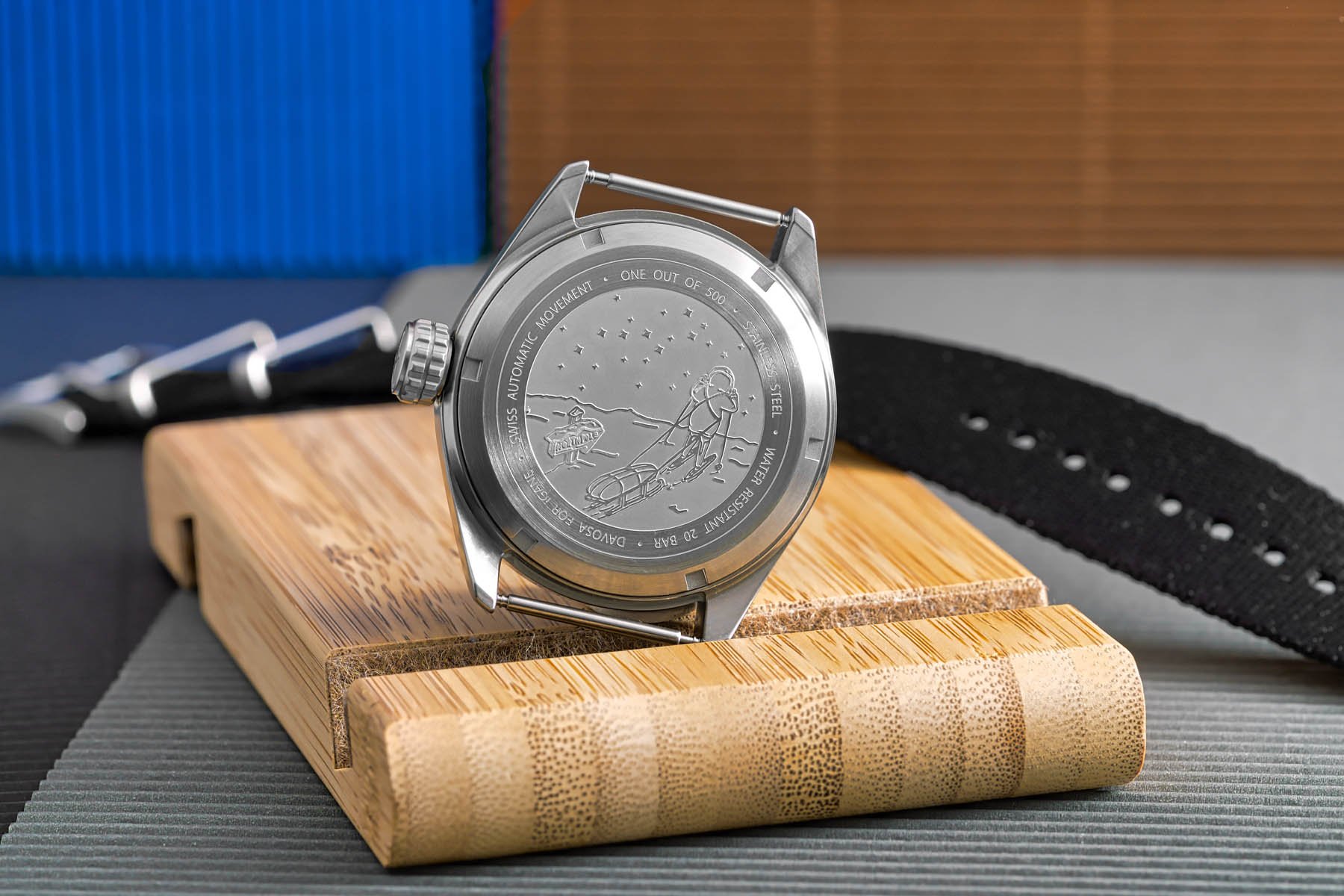 It’s good to disrupt my own watch routine and review a completely different watch from time to time. It was quite random how this Davosa found me, but it brought back some old memories and created new ones. Thanks to the resemblance to the iconic Explorer I instantly felt familiar with the watch. Honestly, the Davosa logo on the dial didn’t make me uncomfortable for a single moment. The North Pole is simple but functional and full of details to explore.

It doesn’t want to be liked by everyone. There is a sapphire, but there is no date. Just as there is no fancy movement. But, on the other hand, there is 200m water resistance and Super-LumiNova. Also, don’t forget that vintage-inspired timepieces often stay under 40mm, but the North Pole goes a bit further. With a €599 price tag and planned delivery for December, you now have all the intel to make your call. So what will it be?