An open invitation for a dance around the time zones!
Daan de Groot
comments 1
Share

I was immediately intrigued when Hermès launched the Arceau Le Temps Voyageur at Watches and Wonders earlier this year. It doesn’t look exactly like any other dual-time watch out there, yet it still looks completely coherent and oh-so-elegant. But I wasn’t there in Geneva to get a feel for what the watch looks and feels like in person. That’s why I decided to request the watch for review so I could spend some time with it. And I’m so glad I did because this is a piece that you definitely need to experience in person. Are you ready for a trip around Hermès’s imaginary world?

I must admit, I wasn’t fully aware of the Arceau watch collection. Yes, I had seen the brand’s H08 modern-looking cushion model before. Other than that, though, Hermès is certainly not the first brand that I think of when it comes to watches. But that completely changed after my week with Le Temps Voyageur (The Time Traveler). The originality of the design, the fine technical execution, and the incredibly enjoyable experience on the wrist ensure I won’t forget about the brand any time soon! Let’s take a look at the watch to see what the excitement is all about. 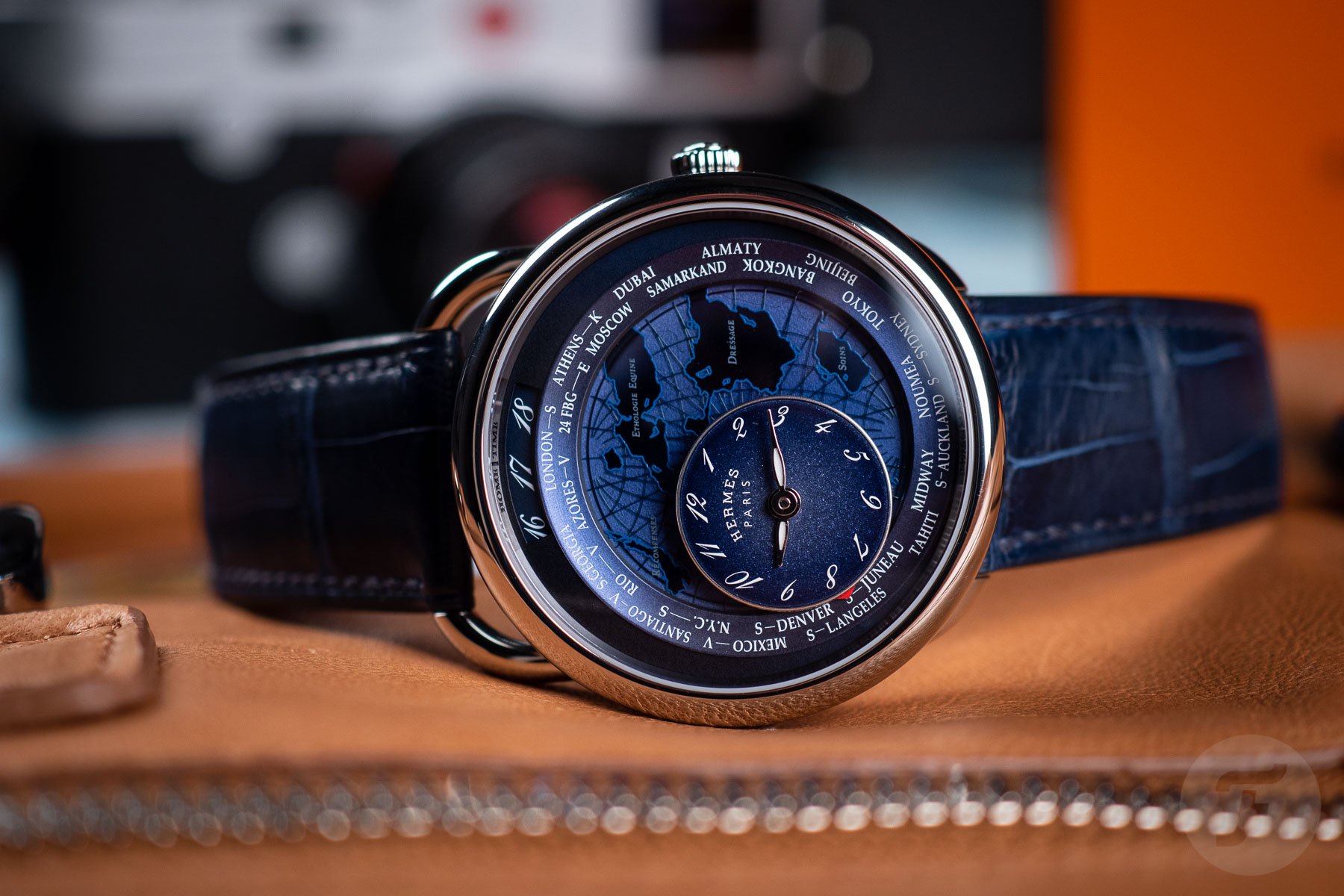 New for me, in a good way

As soon as I opened the little bright orange box that the Arceau Le Temps Voyageur came in, I started to smile. I had seen the watch in videos, but having it in front of you is, of course, a completely different thing. I’d say that goes for most watches. Due to its peculiar design, however, that’s even truer here. The first things that immediately stand out are the asymmetric lug design and the strongly flared case. The original design for the Arceau comes from Henri d’Origny and originates from 1978. So it’s not new in any way, but it certainly was for me.

When I put it on my wrist, I will admit that I had to get used to the asymmetric shape for a second. The strap end at six o’clock falls directly into a slot, which is part of the actual watch case. There are small protrusions on each side of the strap, but it would be exaggerating to actually call those lugs. On the other hand, the arceau (arch) shaped arms at 12 o’clock can definitely be called lugs. They remind me of good old wire lugs. I always enjoy those because they often sit close to the case and don’t take too much of your attention away from the watch. 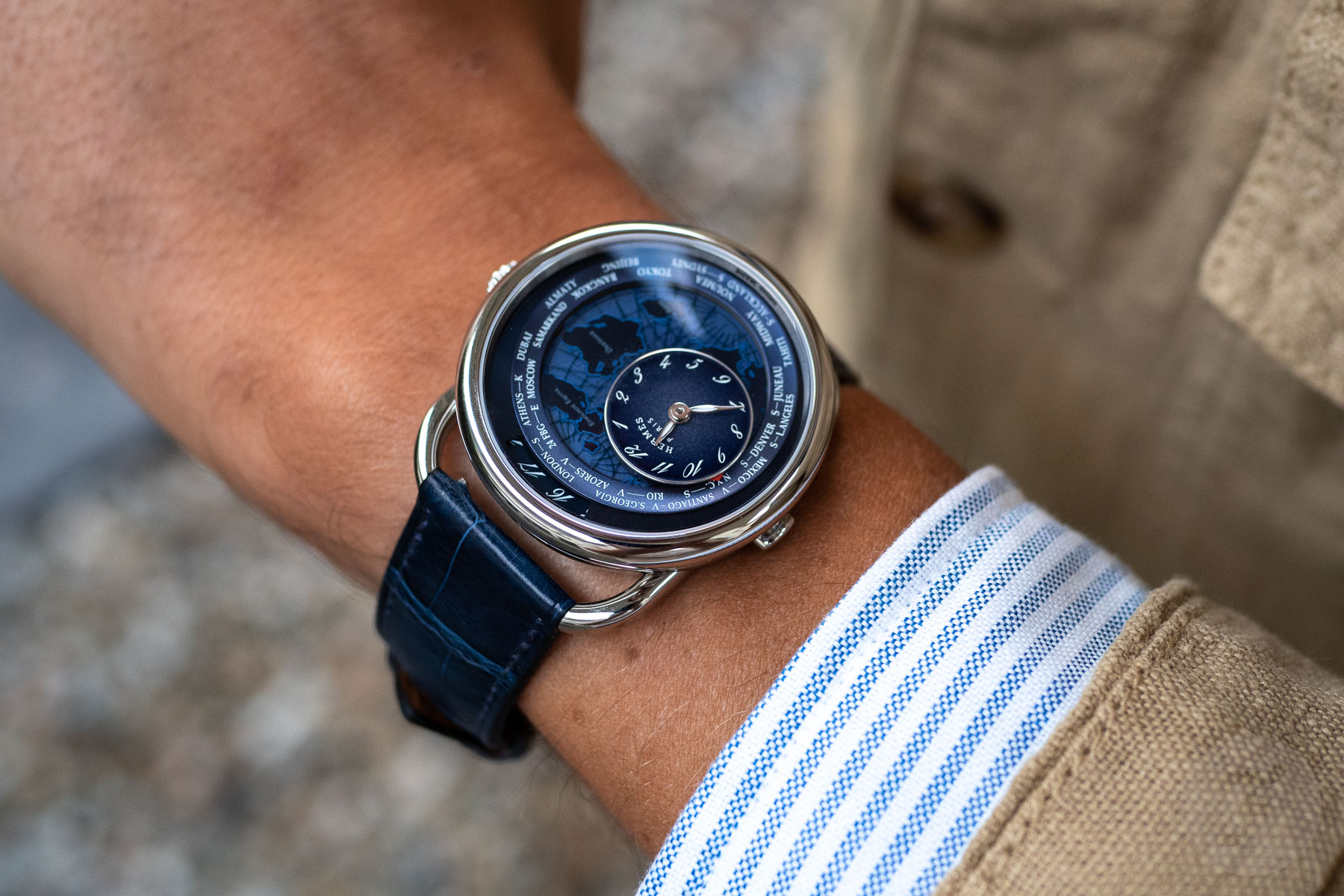 Here, the arched lugs are definitely trying to grab your attention, but they have every right to do so. They’re quite a lot thicker than typical wire lugs and form an integral part of the design. In practice, the asymmetry doesn’t really influence the wearing experience, especially because the lug-to-lug on this 38mm model is only 40mm. That, in combination with the soft sapphire-blue alligator strap, makes for a very comfortable fit. The base of the watch case is also quite a bit narrower than the rim around the domed sapphire crystal, so that also helps. 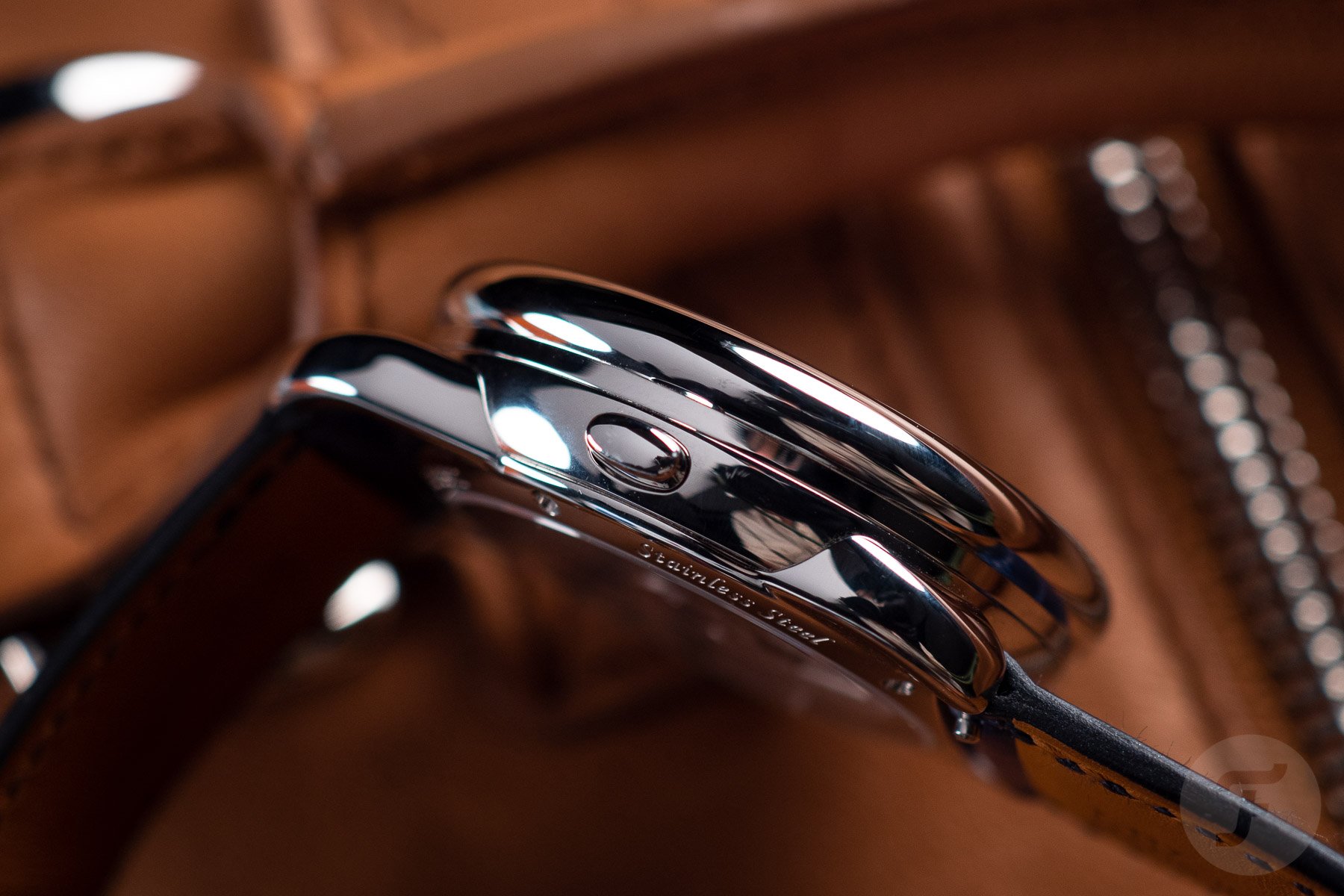 A case of flare

When you look at the Arceau Le Temps Voyageur from the side, you immediately notice that it flares out from the bottom to the top. I actually measured a difference of about 3mm between the bottom (35mm) and the uppermost ring (38mm). This in combination with the modest lug-to-lug distance makes the watch wear slightly smaller than the 38mm it’s advertised as. When I requested the watch from Hermès, I specifically asked for the steel 38mm version. I simply expected its size to work better for my 17cm (6.7″) wrist. However, now that I know how it wears, I’m very curious how the 41mm version would have fit me. I almost expect it to be completely fine.

Furthermore, the flare in diameter in combination with the height of the watch (12.41mm for the 38mm and 12.52mm for the 41mm version) almost makes it look like the watch is floating on top of your wrist. This three-dimensional effect is further accentuated by the beautifully unusual dial design. 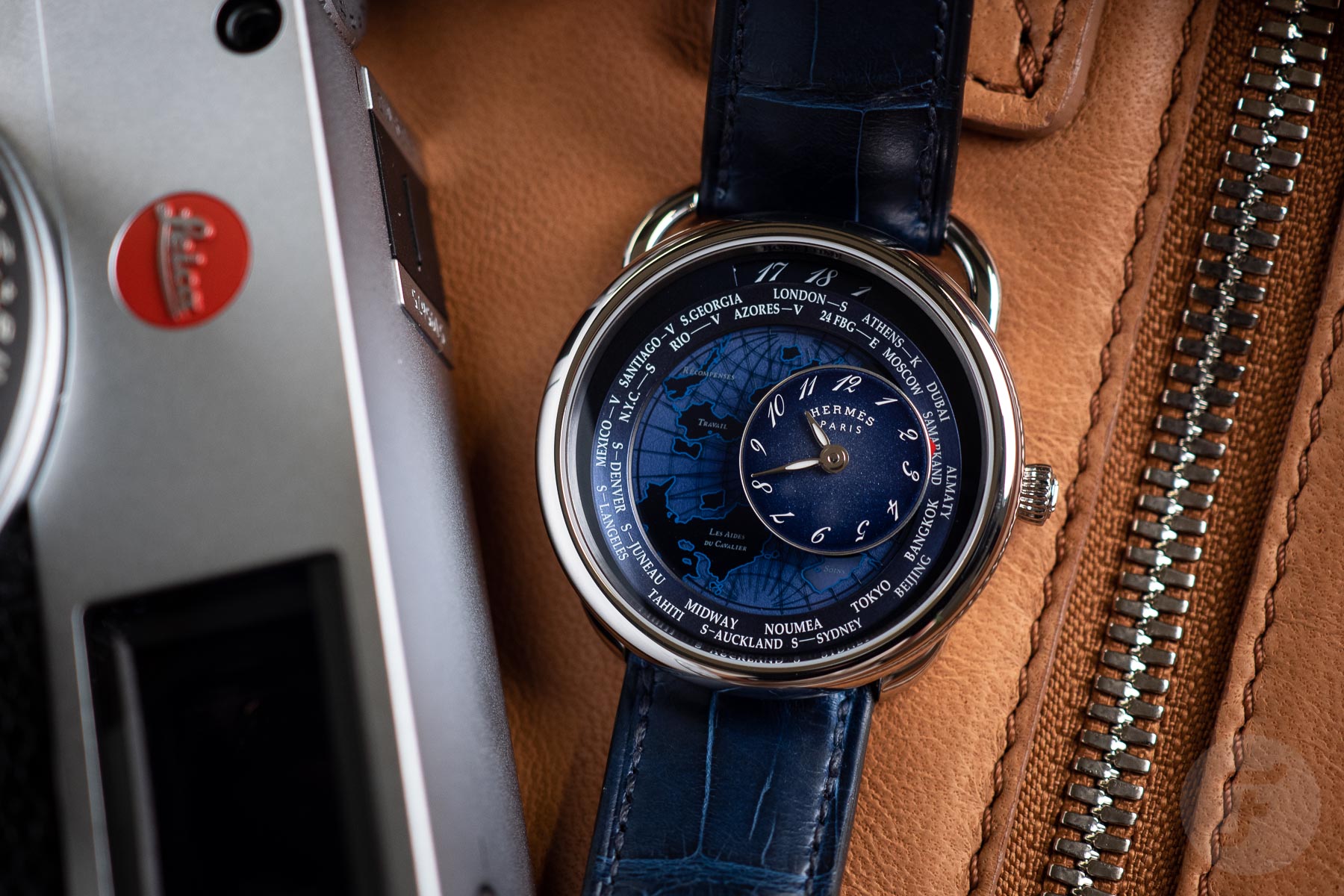 The dream is in the details

To begin with, it’s unusual because the dial doesn’t sit fully centered in the case. Just look at that city ring, which, by the way, also features summertime indicators with the first letter of “summer” in each city’s local language. Oh, and Paris, which is home to Hermès, is indicated with “24 FBG”, which is the address of the store at 24 Rue Faubourg Saint Honoré. Anyway, the city track kisses the case only on the 6 o’clock side. That leaves room for the home-time indication, which sits proudly at 12 o’clock. I say “proudly,” but it’s not actually that visible and doesn’t stand out when you look down at the watch. This is a good thing because all your attention should be focused on the time floating around Jérôme Colliard’s “Planisphere d’un monde équestre” (planisphere of an equestrian world).

I had never actually heard of the word “planisphere”, but my colleague Thomas had. He told me it’s the projection of a sphere on a plane map. The equestrian world map by Colliard was introduced in 2016. There was even an inflatable sphere version of it, but the most well-known version is probably the one used for a silk Hermès scarf. When you look closely at the galvanized dial, you can even read the names of the five continents — Travail (Work), Dressage, Ethologie Equine (Equine Ethology), Les Aides Du Cavalier (Rider Aids), and Soins (Care). And then we get to the star of the show, that floating sand-blasted blue gradient travel-time dial. 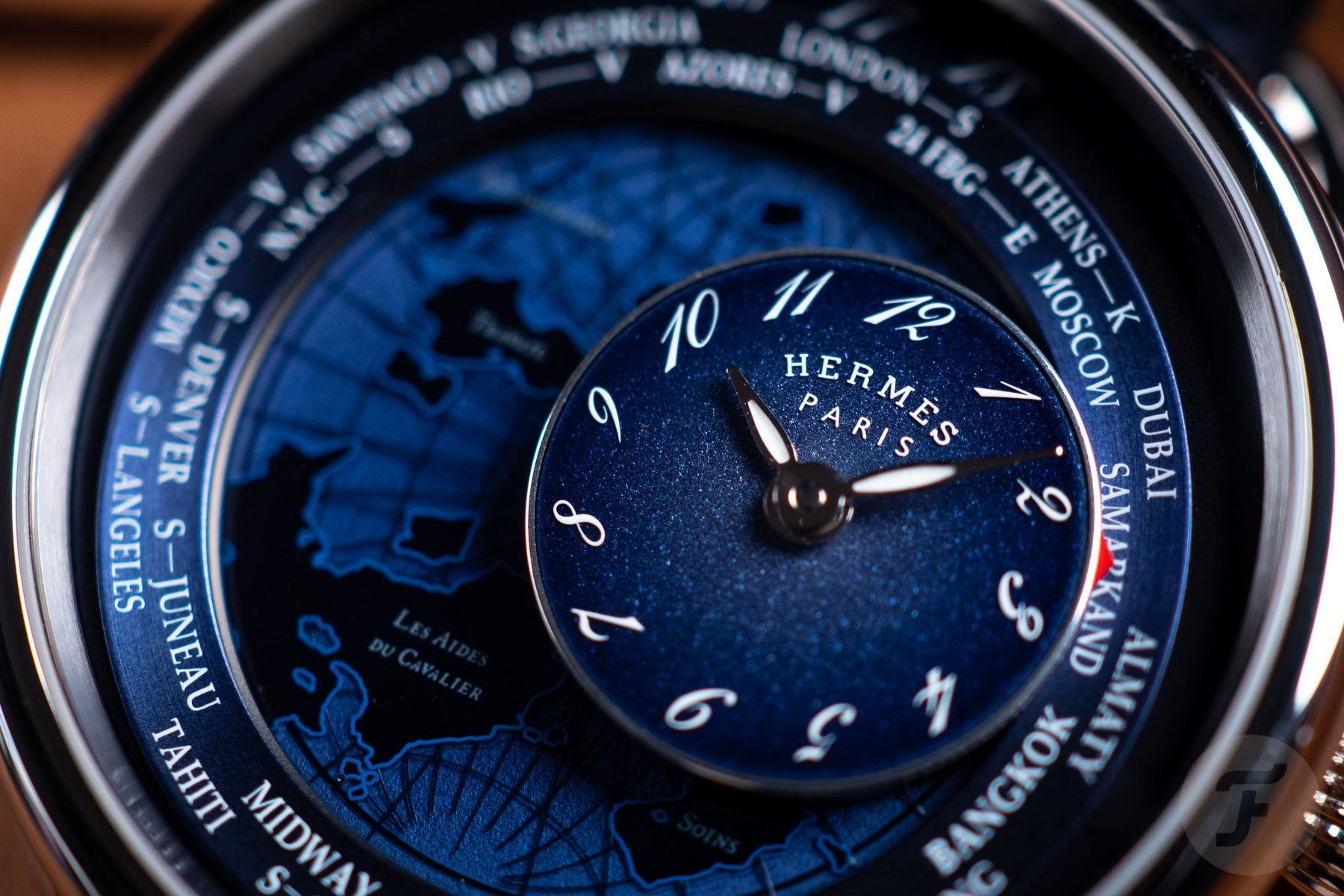 It really jumps at you when you look at the watch. And that’s probably also because it is quite a high module. It has to be because there should be enough space for the clever part of the movement that allows it to move around the dial. There’s a button on the left side of the case with which you can set the local time zone. However, due to the overhang of the 38mm rim, you don’t notice the button when looking down at the watch. Each click of that button moves the sub-dial very gracefully over the map. 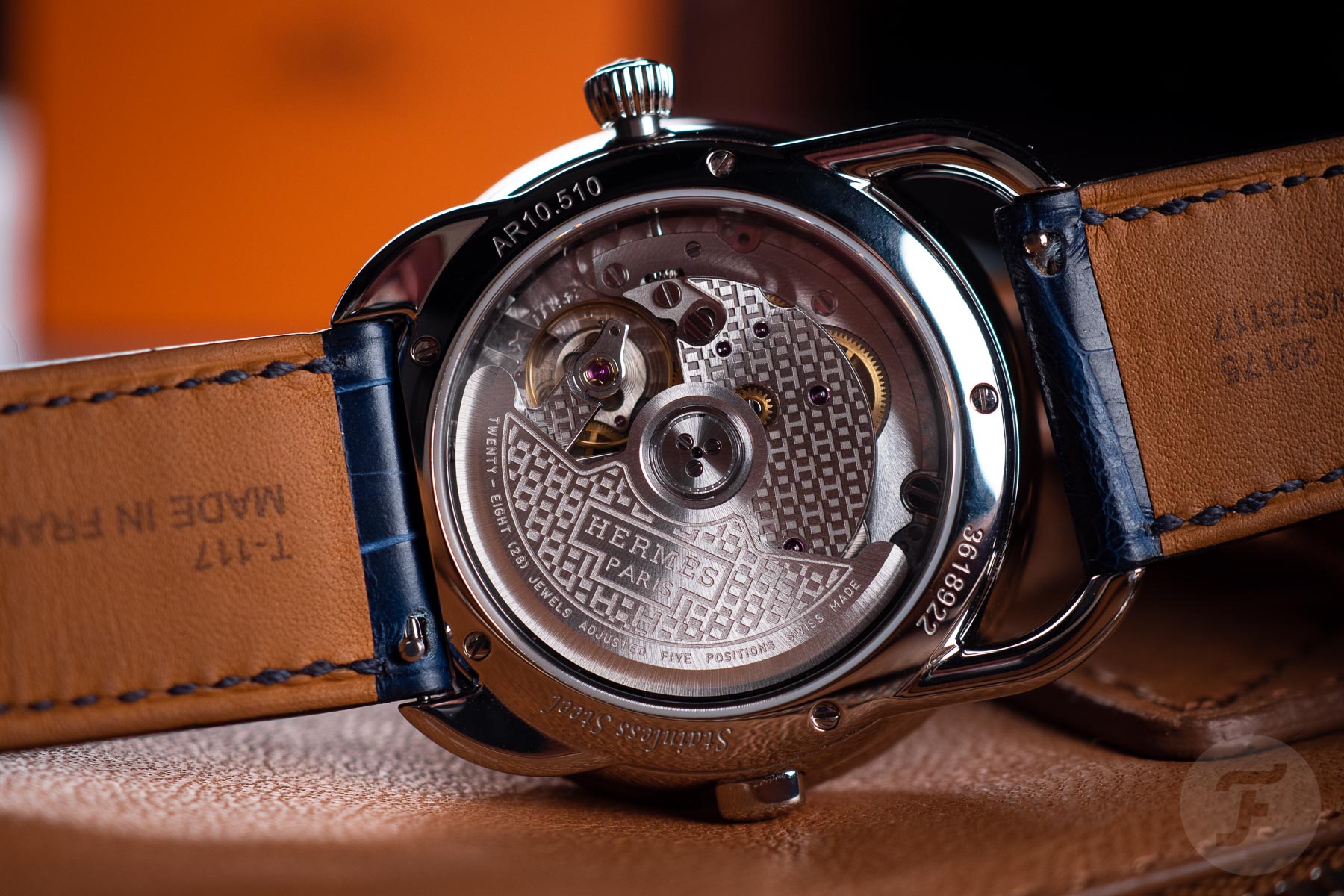 And although the rhodium-plated hands are small, there was still enough room to fill them with Super-LumiNova. The italic Arabic numerals almost make it look like the sub-dial is joyfully spinning around the map. Oh, and take notice of the tiny but very helpful red arrow just next to it. It doesn’t just sit there, but actually moves around the sub-dial to very precisely indicate the local time zone. The marvel inside the Arceau Le Temps Voyageur is the in-house H1837 caliber. The time-zone-module was exclusively developed for, and in collaboration with Hermès by Jean-François Mojon’s company Chronode. This company was also responsible for the moon-module inside the mesmerizing Arceau L’heure de la Lune. It’s amazing that Chronode’s movement engineers have been able to hide all the moving parts. 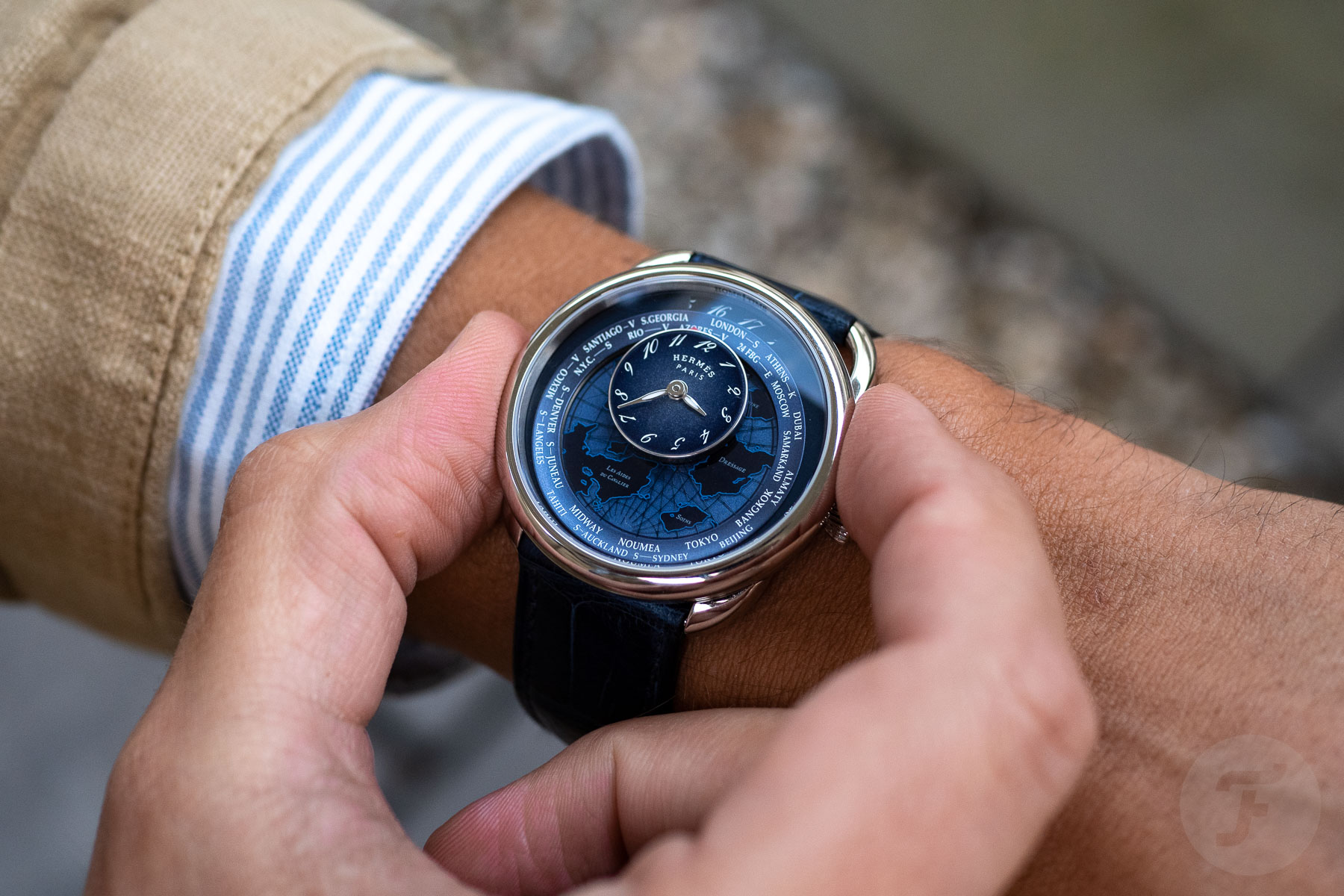 Dancing around the world

When operating that button as well as the crown, it all looks amazing and works so effortlessly. It’s almost as if that sub-dial is dancing instead of traveling. And I think that’s exactly what Hermès has tried to do here. The home time is there, but with the way it’s designed, it should actually be something to forget about when you’re making your way around the world. There’s also no minute track, so the time displayed is merely an approximation of the time it actually is. And that goes hand in hand with Hermès’s philosophy to not try to control time, and not be hung up with time all day. That way of thinking allows you to explore different time zones. And the Arceau Le Temps Voyageur is the perfect watch to have on your wrist while doing so.

I really think the physical movement of the sub-dial to indicate a different time zone is such a magnificent feature. I didn’t travel during my time with the Arceau Le Temps Voyageur. But as I clicked my way through the time zones, I could imagine myself being in all the different places that little red triangle was pointing at. That’s why the name of the watch matches so well with what it actually allows you to do. It really turns you into a very elegant time traveler! 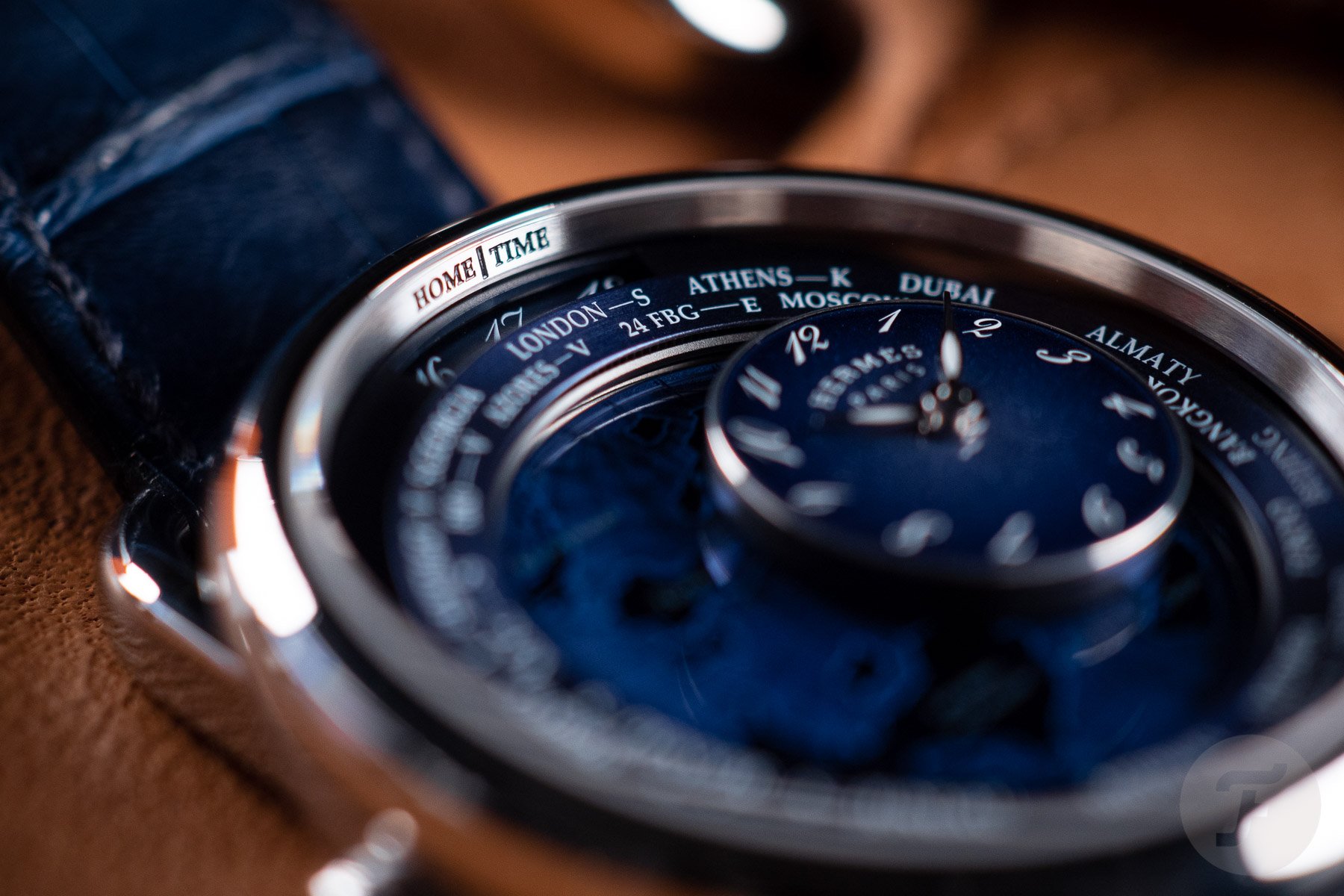 I don’t think I have to tell you that I truly enjoyed my time with the Hermès Arceau Le Temps Voyageur. There are so many original details incorporated into this beautiful-looking watch. I was sad that I had to return it because, due to its €18,000 price, it will probably not find its way onto my wrist again anytime soon. But, as I mentioned, I would like to try the 41mm platinum-and-titanium version in black and gray just to see how that size would fit my wrist. That one’s even more out of reach, though, at €23,000. Oh, and if you’re interested in a version with diamonds and a mother-of-pearl dial, that one’s available in a 38mm case for €22,000. You can find more information on all three versions on the Hermès website. 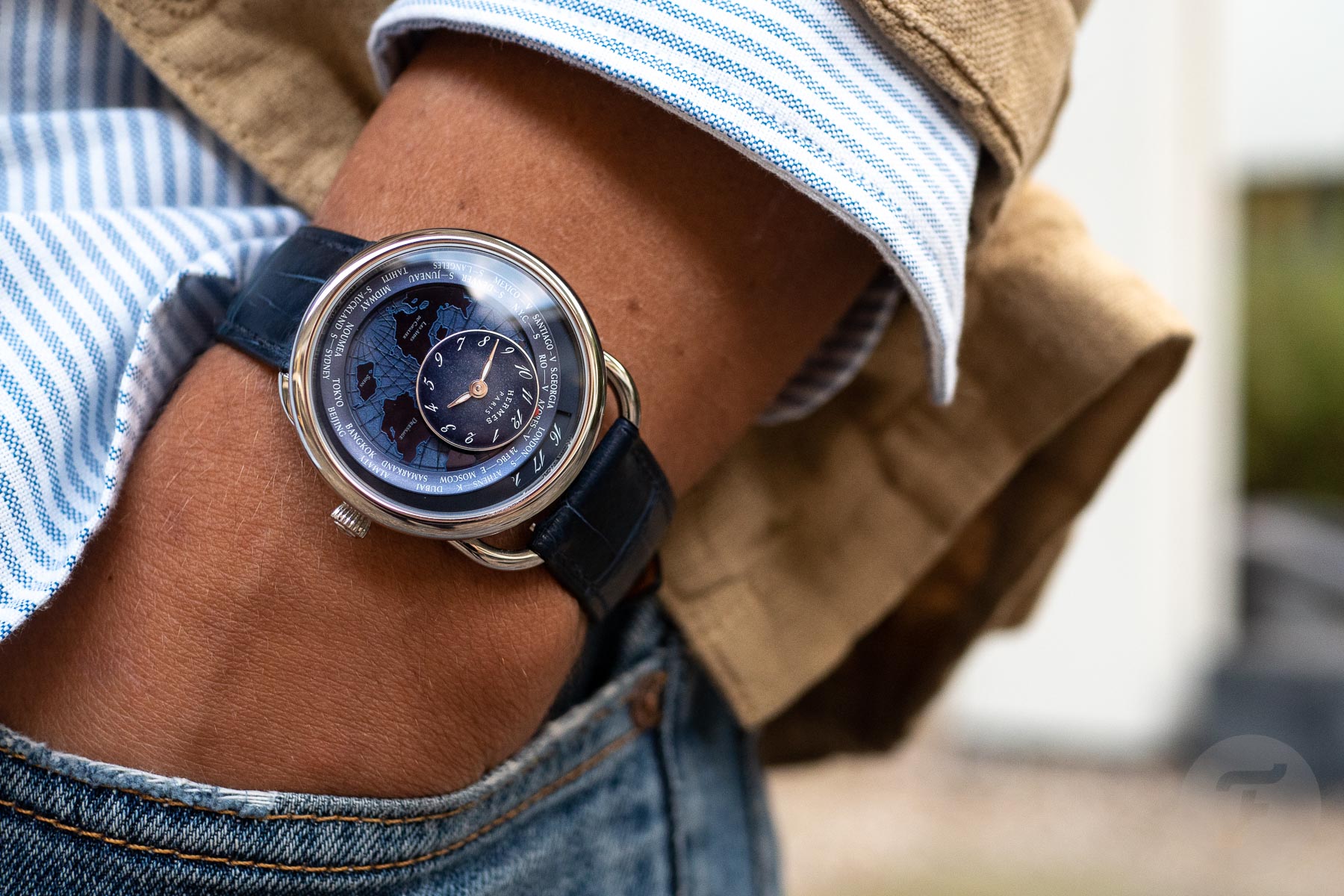 By the way, it looks like I’m not the only one appreciating Hermès’s originality. At last Thursday’s GPHG gala, both the black/gray 41mm version and the blue 38mm version of the Arceau Le Temps Voyageur won awards in the Men’s Complication Watch and Ladies’ Complication Watch categories, respectively.

But what do you think of the Hermès Arceau Le Temps Voyageur? Would this be your travel watch of choice, or would you go for a more conventional execution of this complication? Let me know your thoughts in the comments below.