And it's not a limited edition...
Robert-Jan Broer
comments 0
Share

Remember the first Omega Seamaster Professional 300M ‘Bond’? The 2541.80 (quartz) and 2531.80 (automatic) to be precise. Those watches weren’t limited editions, but part of the regular Omega collection and worn by Bond in 1995 and onwards. Today, we introduce to you the Seamaster 300M that Bond will wear in No Time To Die, and it will be in the regular collection as well.

I love the Seamaster 300M 2531.80. I had many, sold many, and repurchased one two years ago, realizing I shouldn’t have sold the first one that I bought in 2000. The Seamaster 300M was, and is, the bread and butter piece for Omega. It always offered a lot of bang for the buck and still does. Especially the recently introduced models, with the in-house developed and produced Master Chronometer movement.

For a long time, the question was which Seamaster 300M model Daniel Craig will be wearing in the upcoming ‘No Time To Die’ Bond-movie. It was already clear that it would be a Seamaster 300M based on the pictures taken on the set that are floating around. Today, in New York City in the presence of Daniel Craig, Omega unveiled the Seamaster 300M that will be on the wrist of Bond. Nobody expected an entirely new release for this, I guess, but Omega (with input from Craig) took the opportunity to create something special for James Bond. Daniel Craig wore the 300M before, in Casino Royale (2006). In that same movie, Bond wore a Seamaster Planet Ocean and kept doing so in the movies that followed. In Spectre, James Bond wore a Seamaster 300 model (not to be confused with the 300M).

This Seamaster 300 was a limited edition of 7007 pieces. And if you think that’s not limited, the market disagrees with you, they were quickly sold out, and you have to pay quite a premium to buy one today. For No Time to Die, James Bond is back with the 300M. 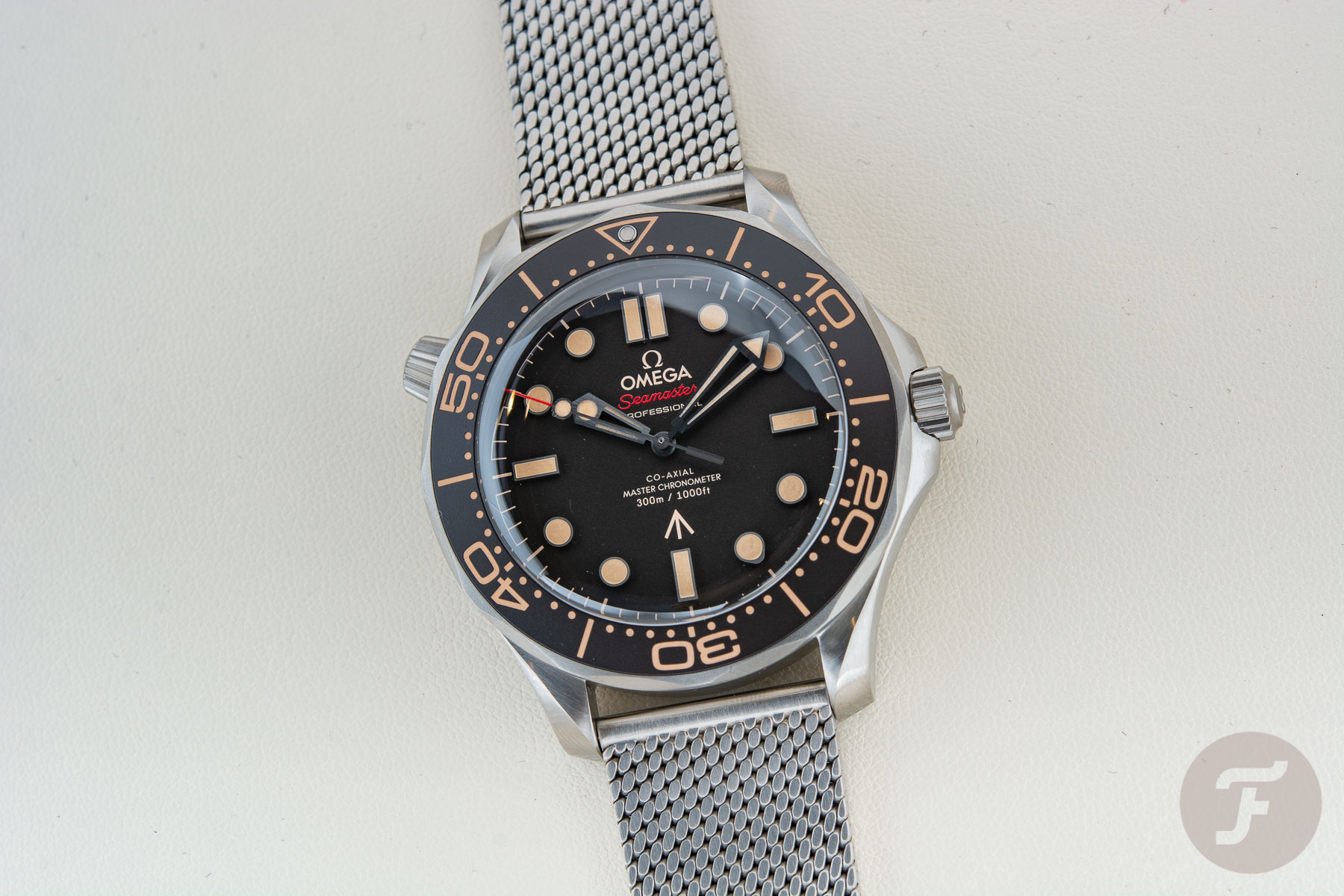 This 42 mm Seamaster 300M is made of Grade 2 titanium and features a beautiful Milanese bracelet, also in titanium. This was the watch that people already saw on some of the Bond-set images, and tried to ‘imitate’ by putting a Milanese bracelet on their Seamaster 300M watch. What also was noticed on some of the photos, was the broad arrow just above the six o’clock marker, giving it an apparent military reference. Perfect for Bond.

What I also particularly like is the domed crystal. It slightly results in a bit of distortion under certain angles, but it provides the watch with this great vintage look & feel. 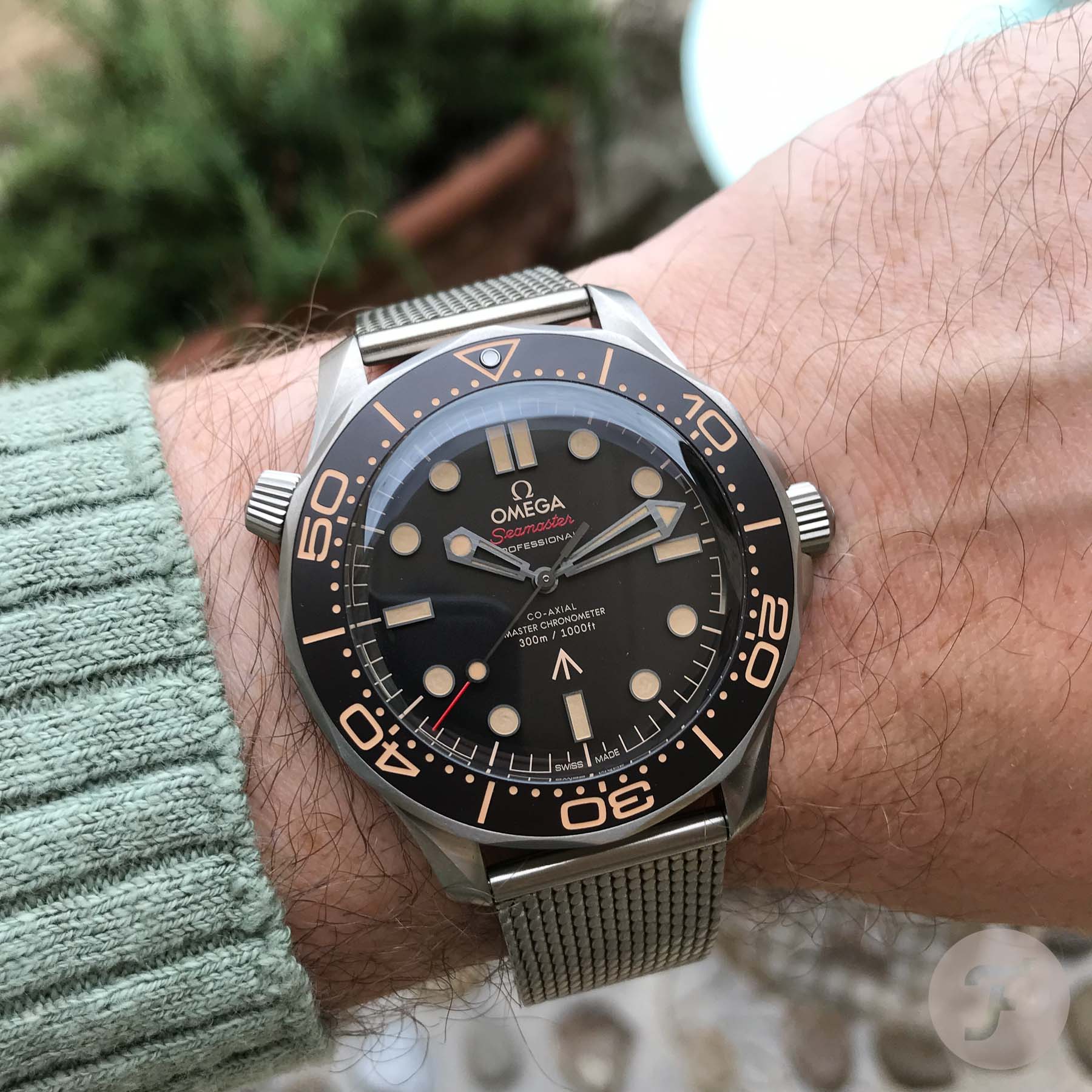 The tropical brown (aluminum!) dial is nicely done with creamy looking indexes and writing. Above the MoD arrow, you will find the ‘Co-Axial Master Chronometer 300m / 1000ft’ writing, and above the center pinion, there’s the Omega logo and writing. The red printed ‘Seamaster’ gives excellent contrast and matches the red tip of the second’s hand. We find the creamy color also on the diving scale of the aluminium bezel.  As you can see, there’s no date aperture on the dial. Where the original Seamaster 300M Bond had a date window at 3 o’clock, Omega decided to skip the date for this watch and kept it as clean as possible. I applaud Omega for leaving the date out, I don’t care for a date (window) on my watch anyway. What stayed is the Helium valve at 10 o’clock. Some will like it, some won’t, but it does belong to the Seamaster 300M, in my opinion. 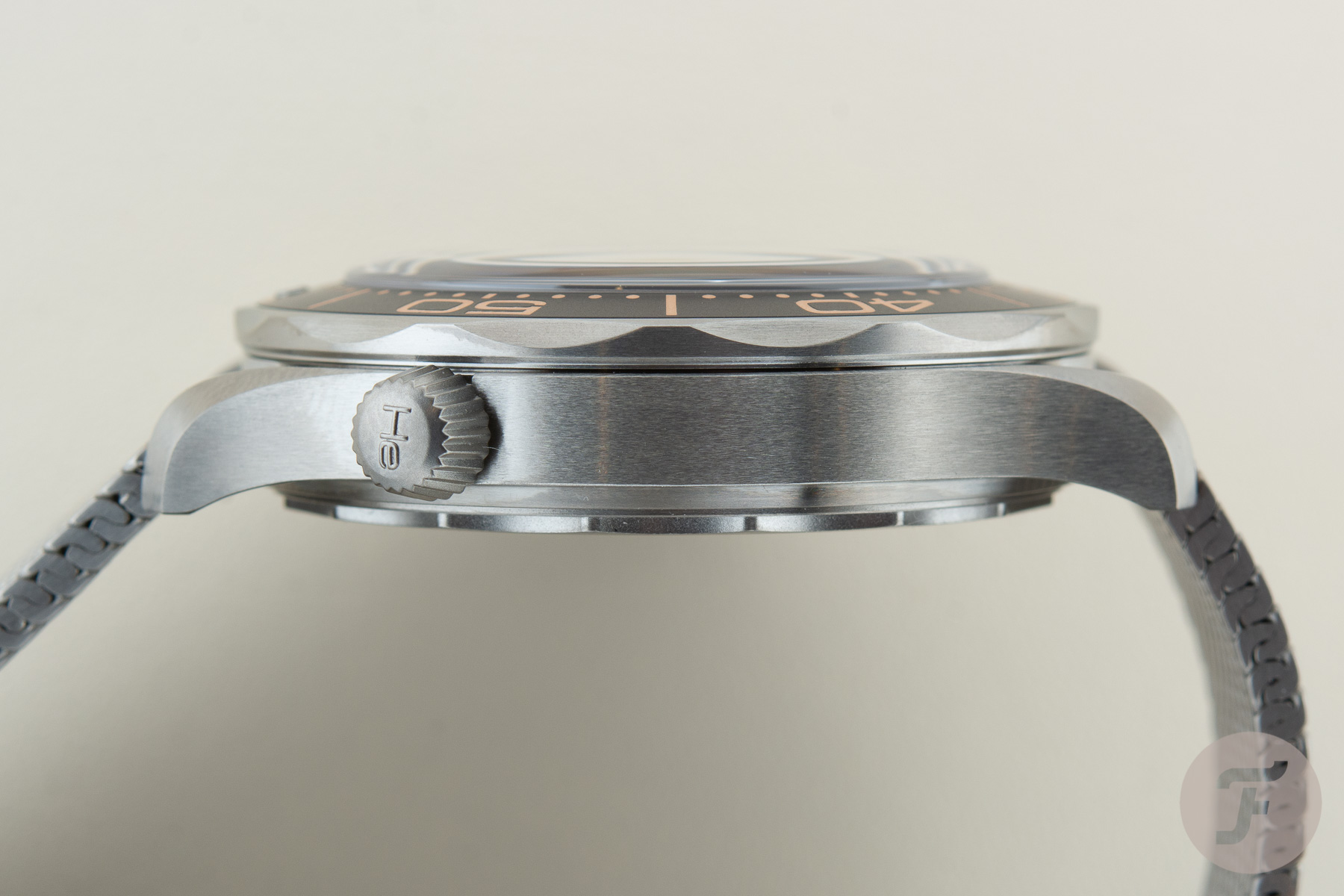 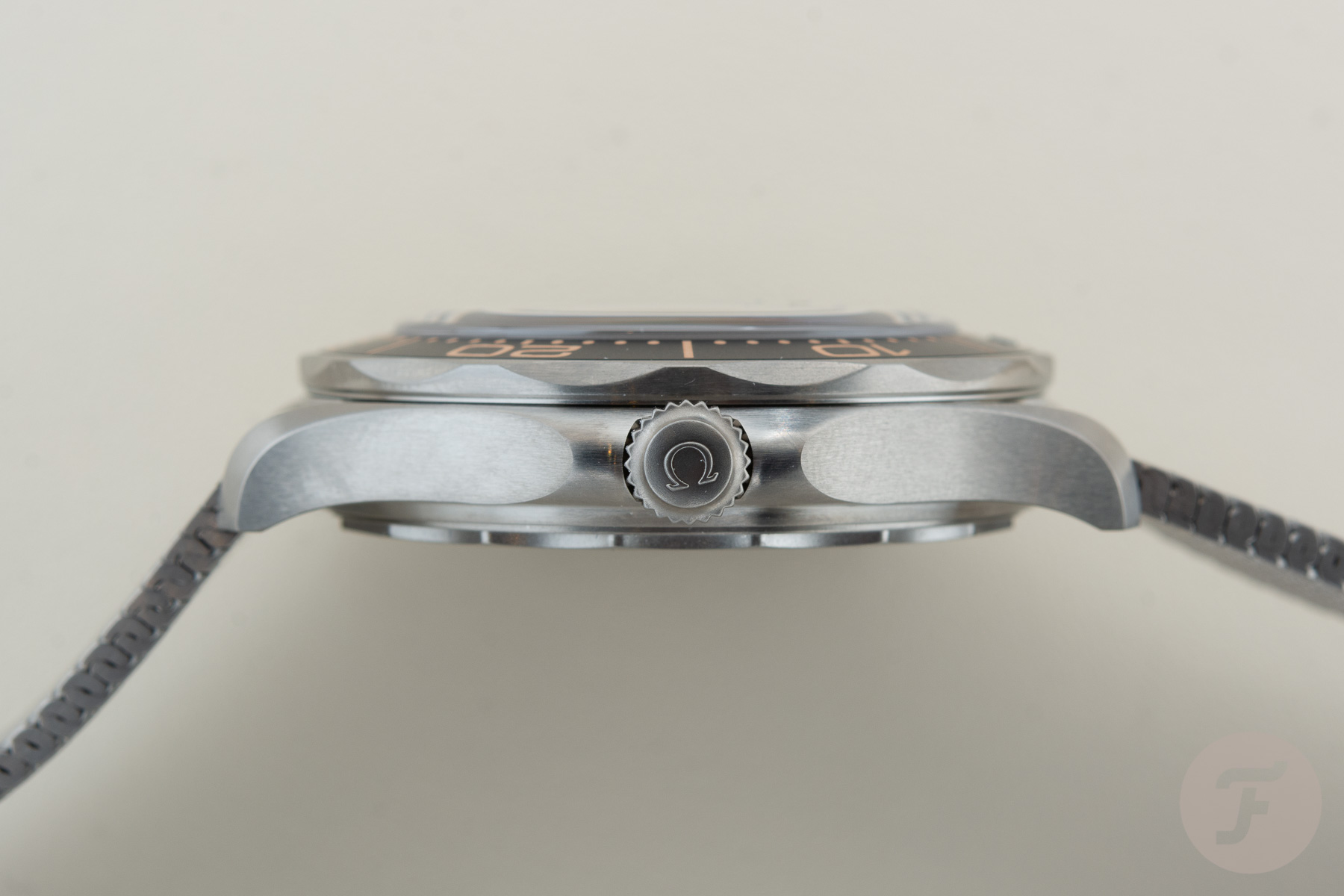 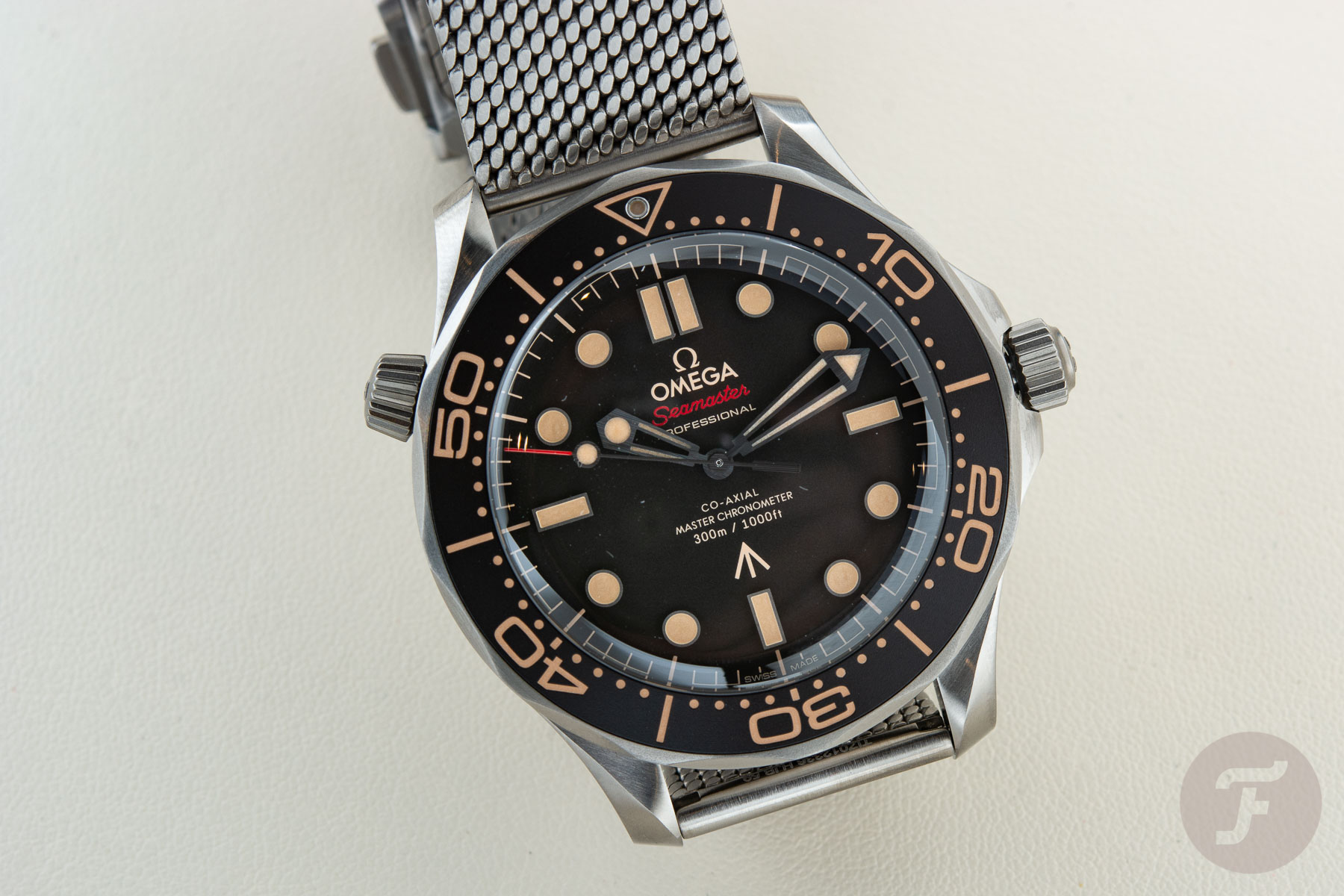 The new Omega Seamaster 300M Bond is not a special or limited edition, but it does contain some references to 007. If you don’t like Bond, but do like the watch, I guess you will have to learn to live with it. Or just don’t pay attention to them. Besides the arrow on the dial, there are some references to 007 on the case back, as well. There’s the 007 trademark logo on the case, with the gun. But you will also find a referral to ‘007’ in the number engraving (more on this below the picture) in the center of the case back, below the broad arrow.

Omega’s Seamaster 300M Bond has the Naiad lock case back, ensuring that the engraving is always positioned horizontally and ‘correct’. The lugs are also engraved, concerning the use of titanium, and then there’s the Omega globe logo. This logo has to do with copyrights and the use of copyrights to control specific markets (more here). 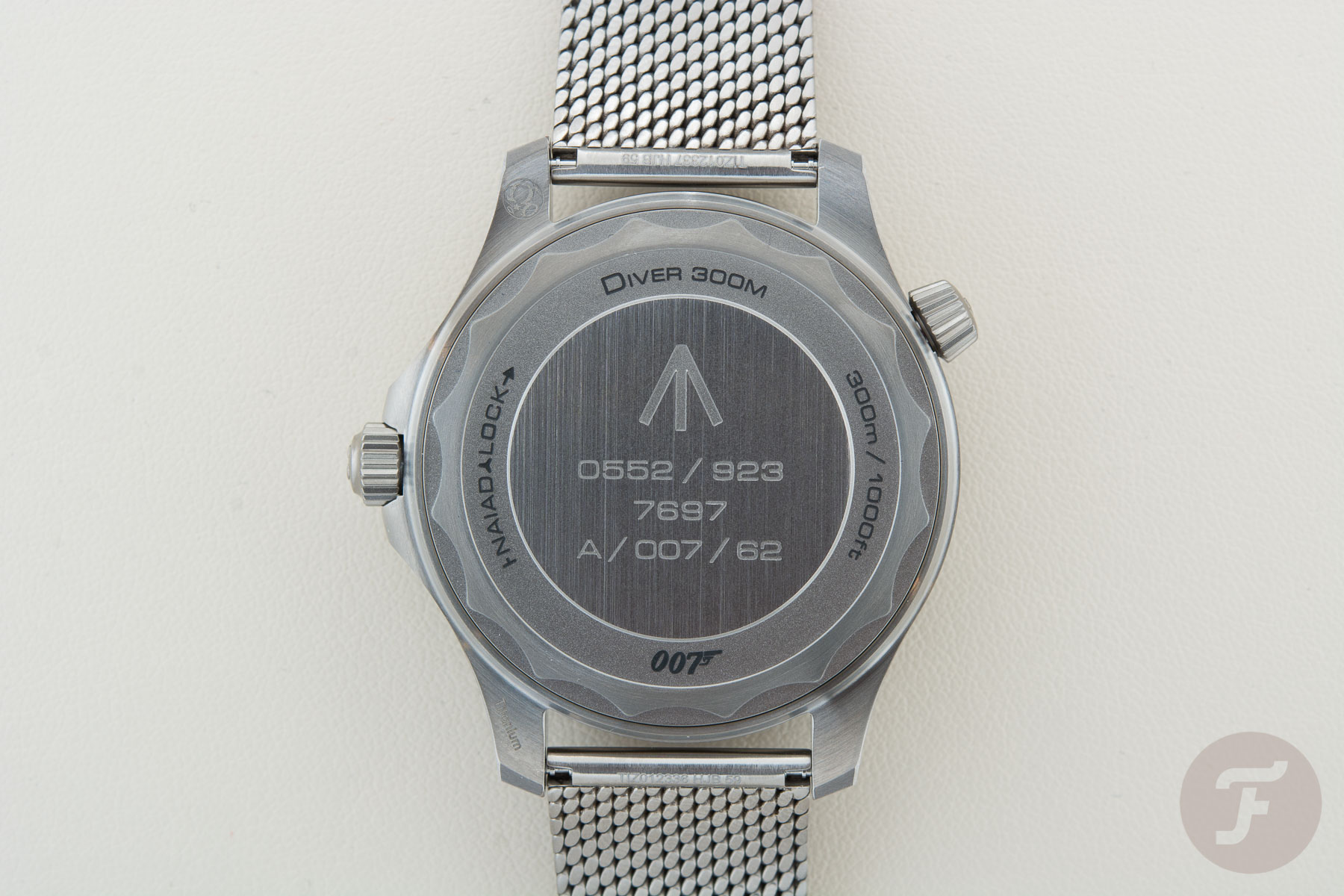 The numbers on the case back which follow the format for genuine military- issue watches. “0552” is the code-number specified for Navy personnel, with “923 7697” being the number for a divers’ watch. The letter “A” is a code used to signify a watch with a screw-in crown, while “007” is James Bond’s iconic agent number. Finally, the number “62” is the year of the very first James Bond film.

Omega’s classic 9-row bracelet that they have been using for the Seamaster 300M since 1993 disappeared for this occasion. Instead, there’s this cool looking Milanese bracelet made of titanium. The bracelet is very comfortable and is very easy to adjust, basically the same way a conventional strap is sized by holes in one part of the strap. The folding buckle has the familiar Omega shape and is used in the same way. Two release buttons to open the clasp, and to close it; you push until you hear the clicking sound. 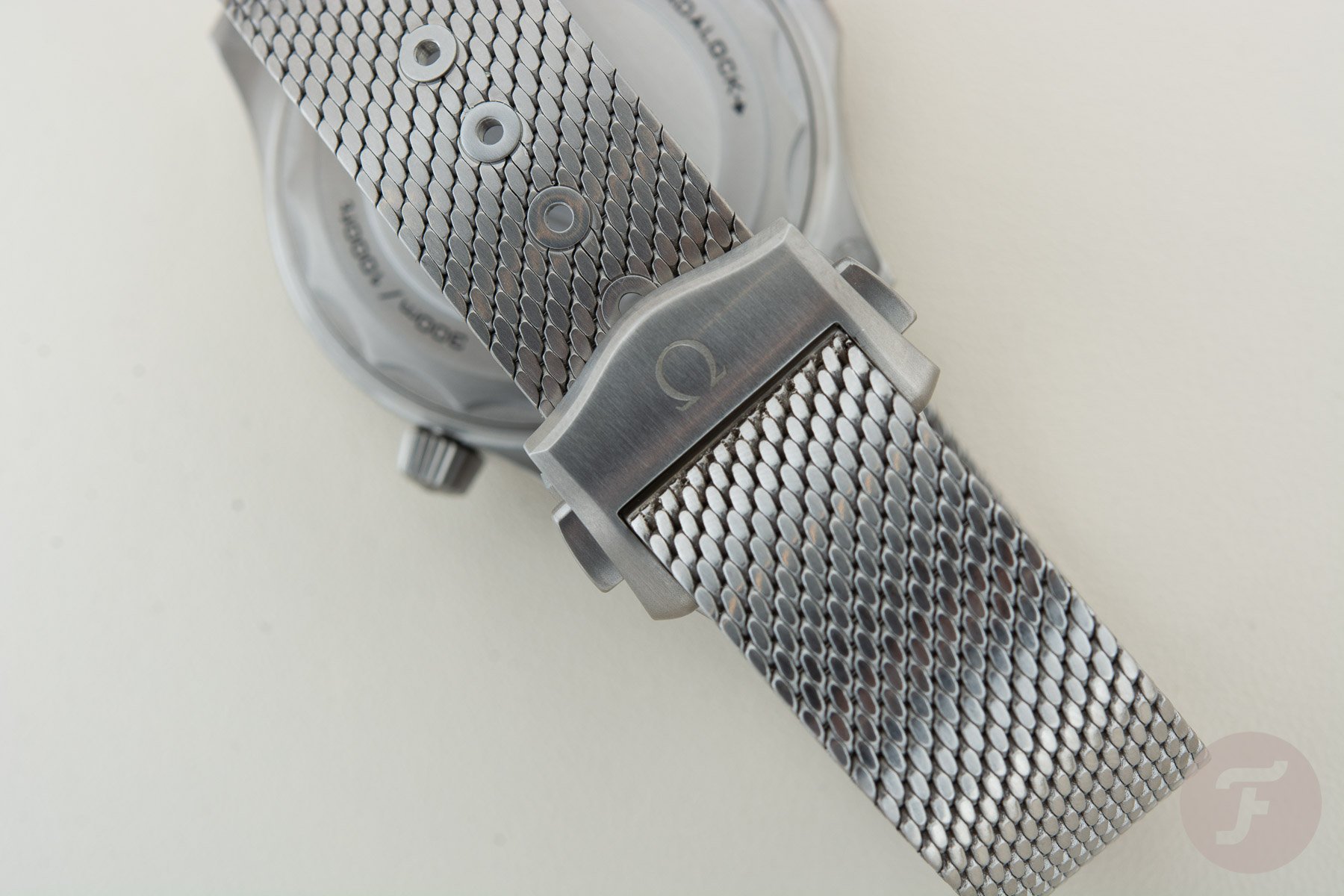 The titanium bracelet is very nicely finished. There are no end-links that fit exactly to the case, and they leave a small gap between the bracelet and the watch. Perhaps not that small, but more or less the same as a leather strap would do. It underlines the utilitarian look, in my opinion, and I am not even sure how it would have looked when the Milanese bracelet would have curved ends that fit the case. 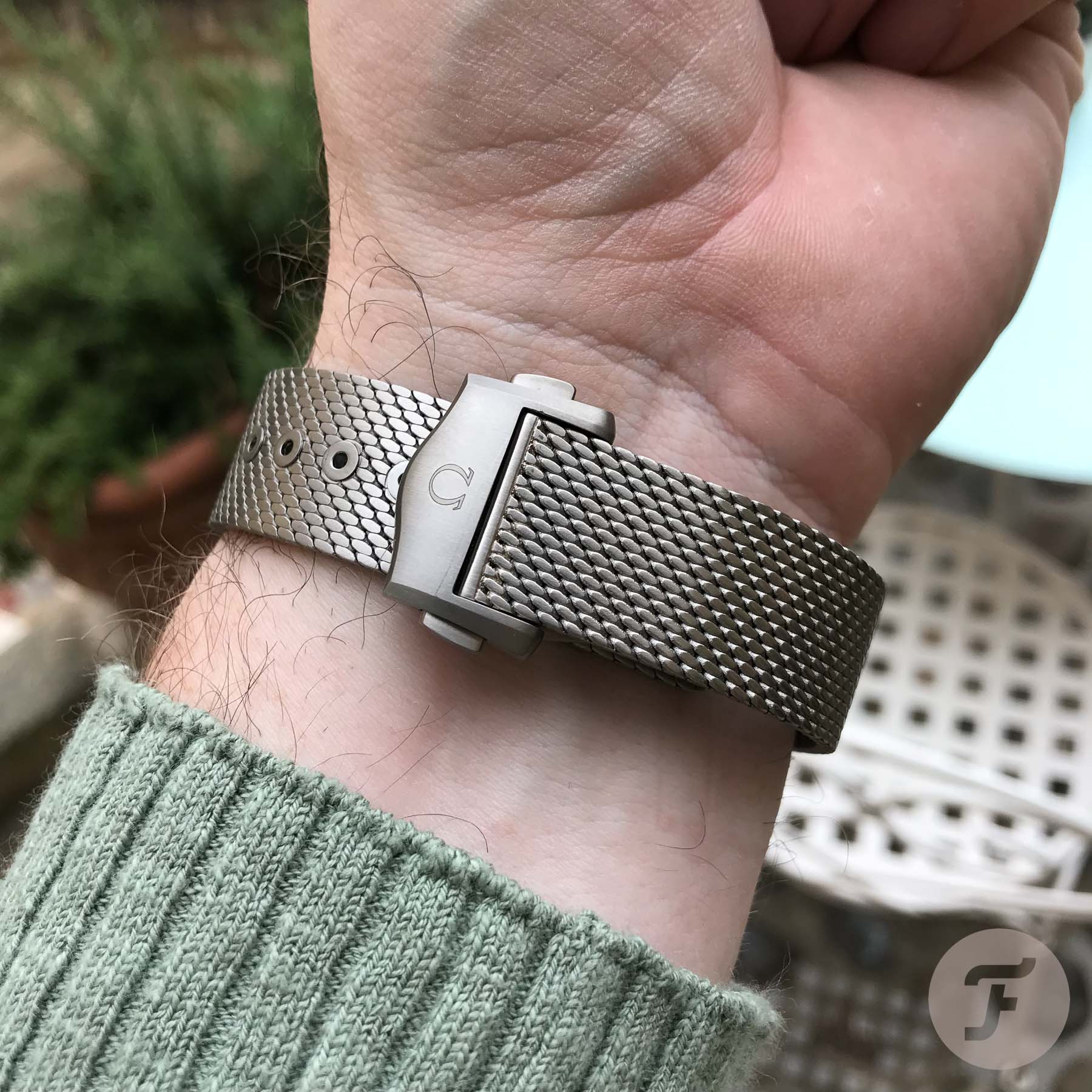 Inside is Omega’s caliber 8806. On the one hand, a pity that you won’t be able to see the movement but on the other hand, a cool engraving is something I can appreciate as well. The caliber 8806 movement for the Seamaster 300M Bond watch is a giant leap from the first (automatic) reference 2531.80 Bond watch, of course that used the ETA based Omega caliber 1120. It has been certified ‘Master Chronometer’ by METAS, of which all details can be found here. Even though you can’t enjoy looking at the movement with this watch, you simply know it is good and nicely finished with Geneva waves in Arabesque. The highly anti-magnetic movement (and thus watch) is something a proper secret agent needs, of course, with all that equipment he’s often exposed to. 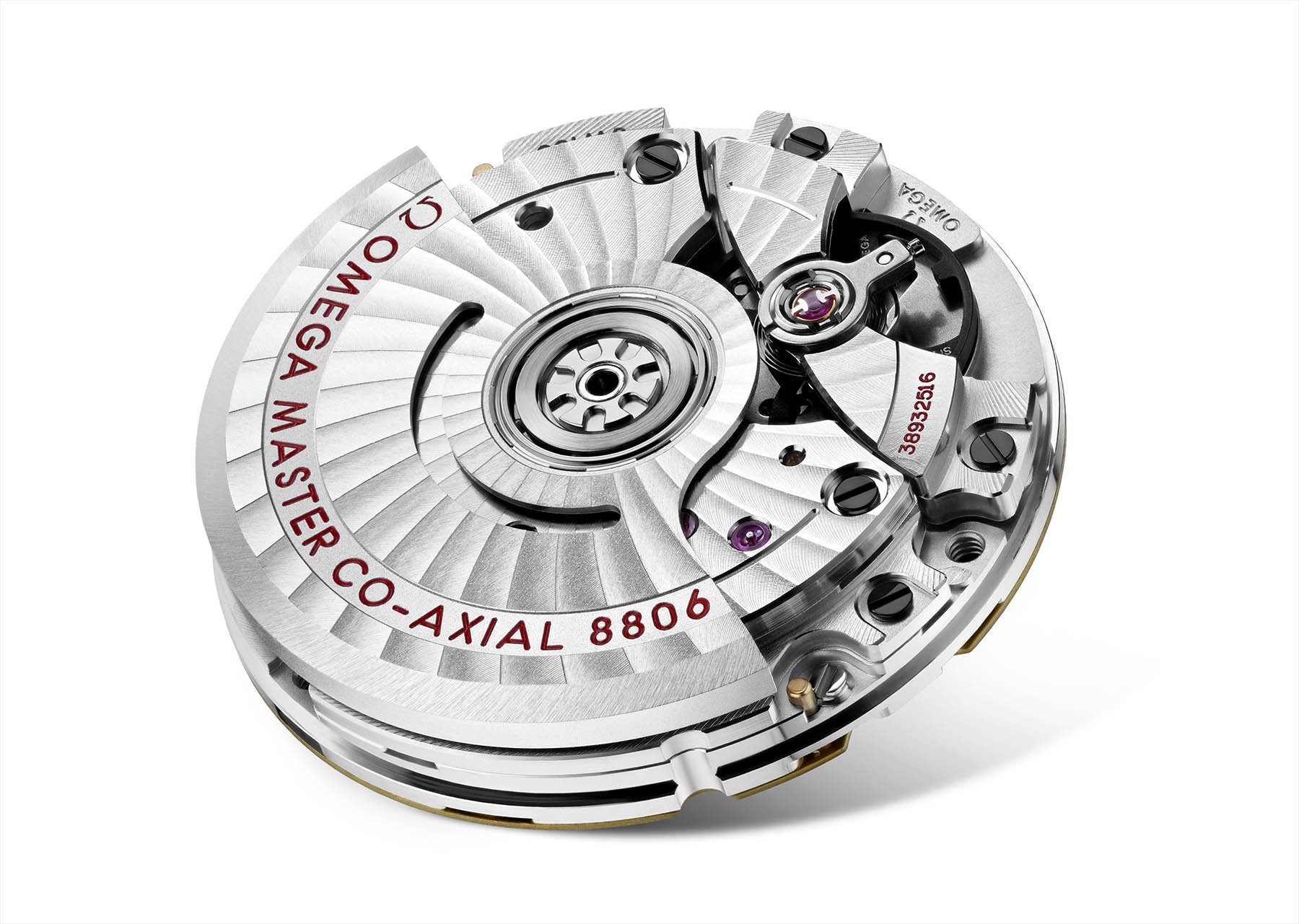 If you aren’t much in favor of a Milanese bracelet, Omega decided to offer this Seamaster 300M Bond with a NATO strap as well. The price difference of nearly 1000 CHF might also help you to make a well-balanced decision. I would personally always recommend buying a watch like this on a bracelet and add the NATO separately. Once you purchased the watch on NATO, it will be a bit of a hassle (and an expensive one) to add the bracelet separately. 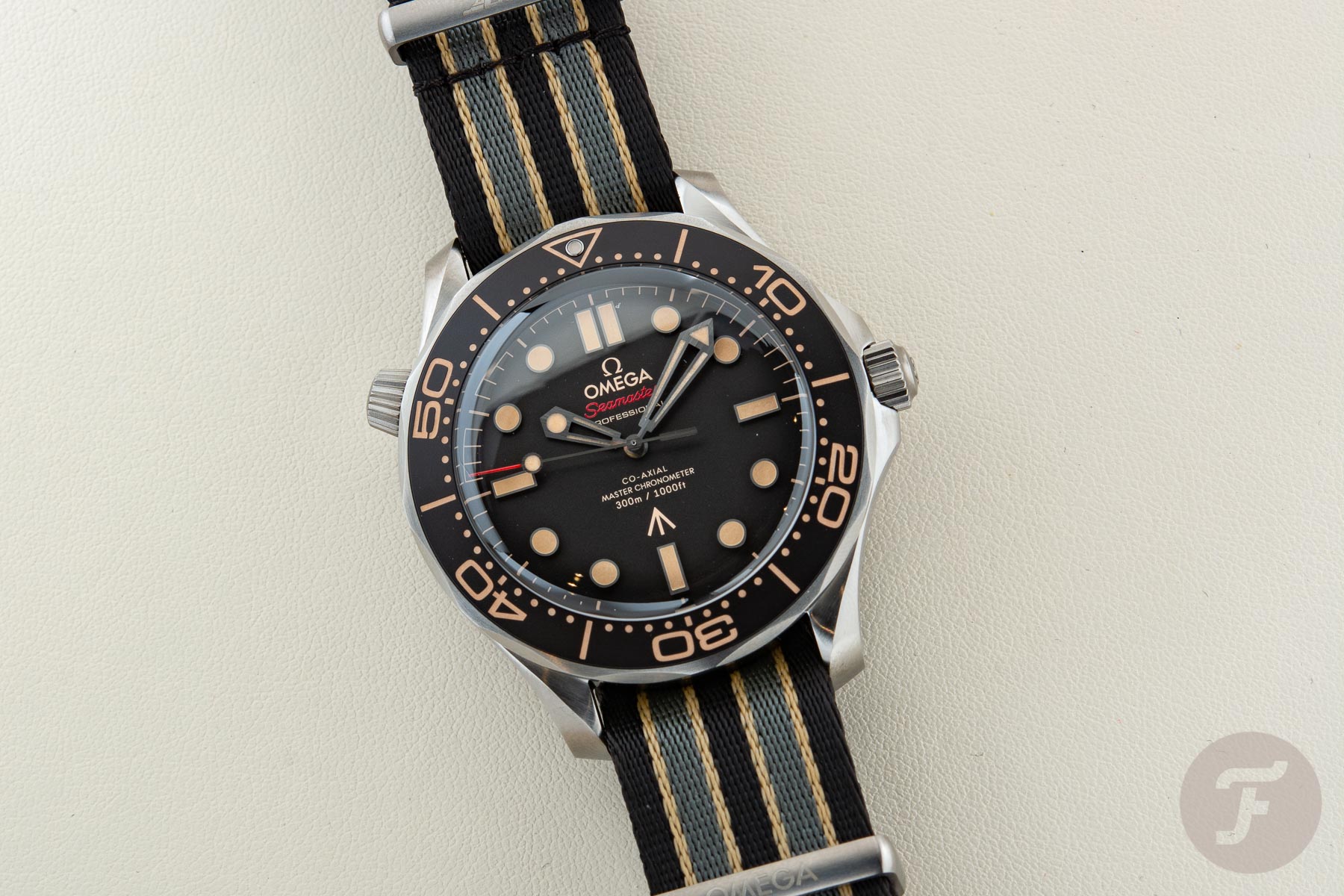 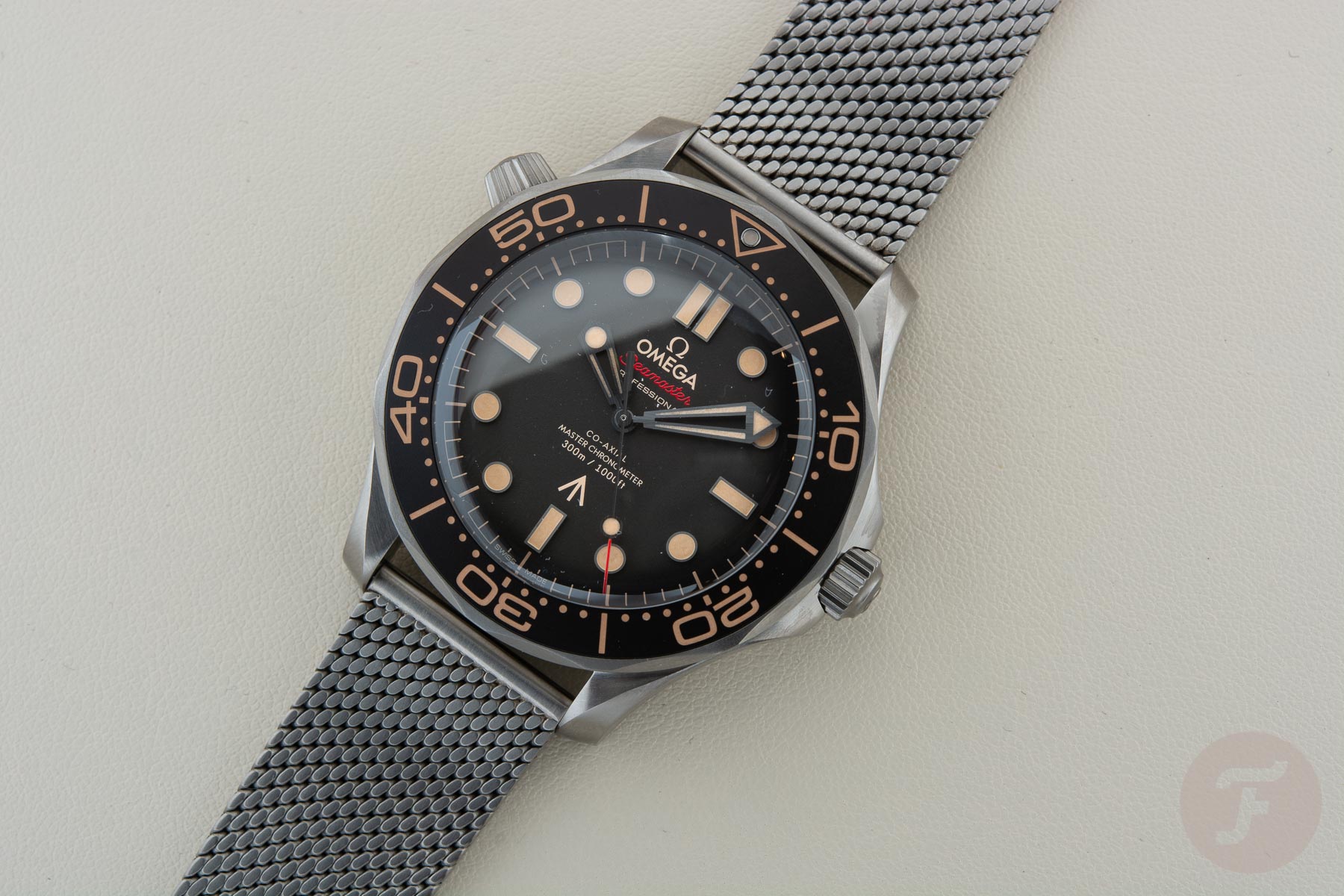 That said, the Omega Seamaster 300M Bond definitely looks good on the NATO strap. Omega decided to use a colorway for their NATO strap that will remind you of the one used by Bond in Dr. No. The keepers on the NATO strap have been engraved with the 007 logo. 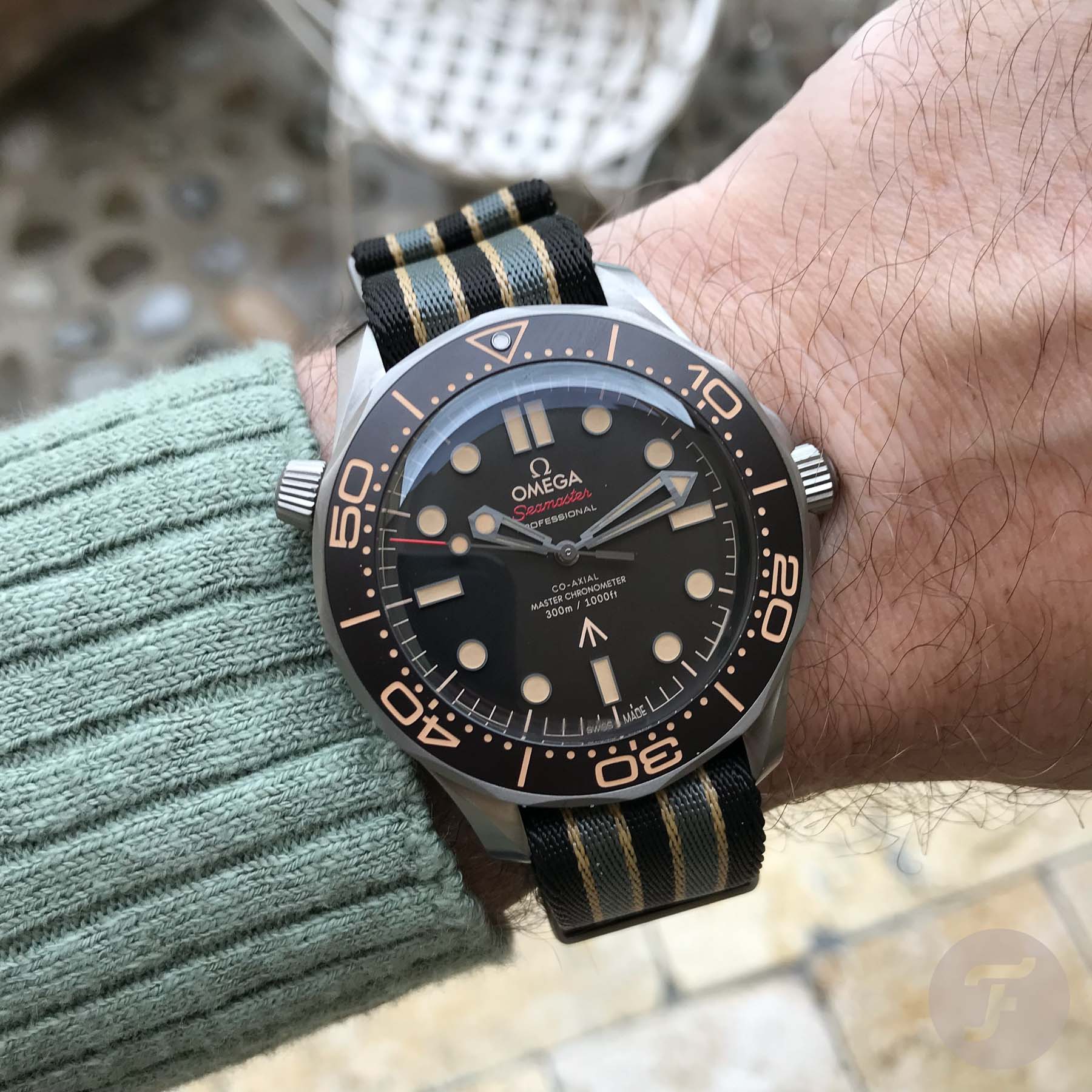 We saw the limited edition Bond watches already a few months ago, and reported about them here. We noticed that those special, or limited, editions are particularly liked by those who love anything Bond. Watch enthusiasts were a bit more reluctant to all the Bond branding, including me. With just a few minor references to 007, this new Seamaster 300M Bond will speak to a broad audience, including the watch enthusiasts. I have tried this watch on, fiddled with the titanium Milanese bracelet, and it really sparked my appetite to make a purchase (again). I never bought one of the Seamaster 300M reference 2531.80 watches (I think I had 4 in total in the past 19 years and currently still own one)  because of the link with James Bond. However, I also know that many people bought this watch because of its role in the movies of 007. It might even have caused many people to become a watch enthusiast after they purchased the watch that Bond was wearing in the 1990s movies. This new Seamaster 300M Bond watch might do the same thing again, even though the price is a bit steeper than those 2541.30 and 2531.80 references back in 1995 when they made their first appearance with 007. 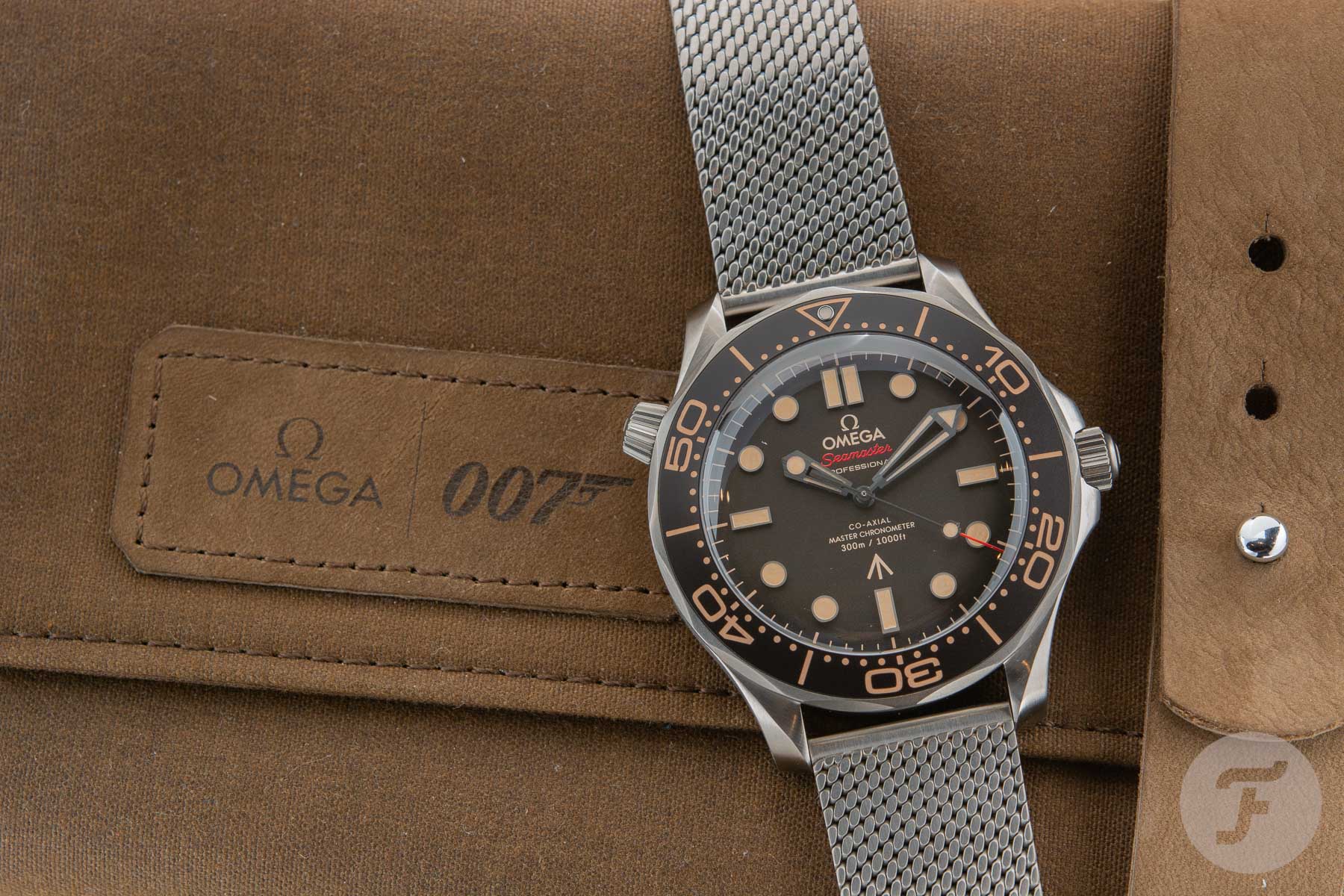 I love the fact that this watch is not a limited edition, and will be part of the regular Omega collection. Everyone who wants this watch can basically buy it (if they have the means) without becoming frustrated about waitlists or ridiculous premium prices by flippers and dealers.

In fact, as much as I was in love with the Seamaster 300M model with the black & Sedna gold combination here, this Seamaster 300M Bond is my new favorite execution of this model. The difference in price is significant, but this new 300M in titanium with the Milanese bracelet is the one to have if your budget allows.

Earlier this year, we did a recap of all Omega Seamaster watches worn by 007 since 1995. Click here to read that article.