The “Frankfurter Allgemeine Zeitung” (F.A.Z.) is one of the must-reads for each stockbroker in Germany’s finance capital at the start of the day. They already cooperated before with Sinn watches, who are also located in Frankfurt.

Therefore it was a logical step to dignify the 70th anniversary of the newspaper with a special edition watch from Sinn. At the Watchtime event in Düsseldorf, I had the chance to try the Sinn 6060 F.A.Z. Later on, the Frankfurter watch manufacture sent us the Sinn 6060 F.A.Z. watch for a closer inspection.

Each year in October, German watch enthusiasts traveled to Munich to visit Munichtime (read our previous report here). Unfortunately, during recent years, the interest in that event declined. An alternative was needed, and Ebner Publishing (WatchTime, Chronos, etc.) took the initiative and launched the successor to that event. The most apparent change is a different location resulting in a new name: Watchtime Düsseldorf. Being one of those German watch enthusiasts, my destination for that weekend was obvious.

Everyone I spoke to during the event was quite pleased about the new set-up – the exhibiting brands as well as the host and, most importantly, the visitors. More than 50 brands exhibited. Several lectures and panel discussions attracted more listeners than there were seats available. While passing by the booths of the different exhibitors, I also noticed several visitors speaking Dutch. This event attracted guests even from beyond the German border.

For Sinn Spezialuhren, this event traditionally has been the opportunity to present novelties independent of Baselworld. One of these novelties is the Sinn  6060 F.A.Z. 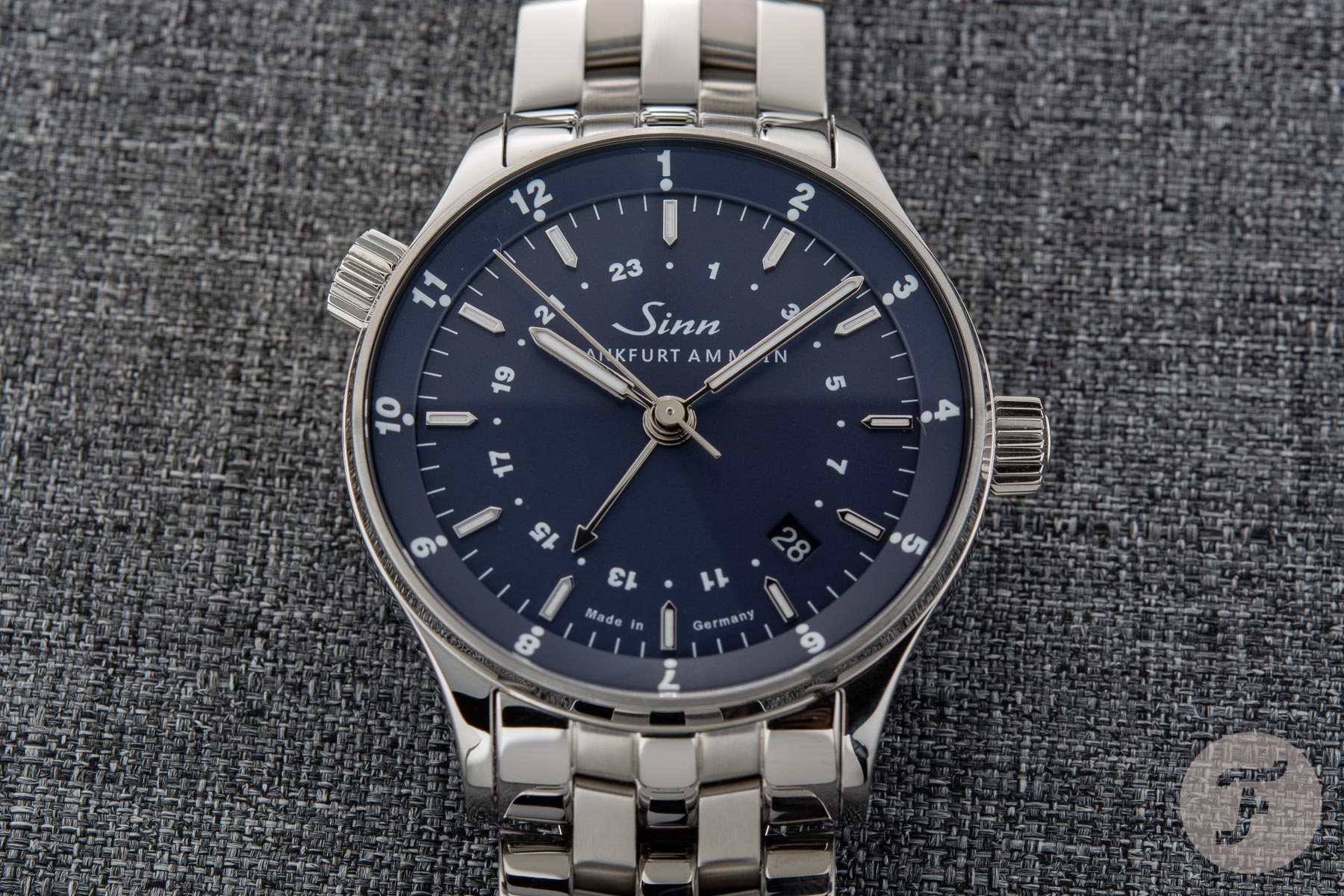 Sinn is famous for its tool watches that frequently appear in the form of so-called Mission Timers, thus indicating their targeting at specialized professional users. In a way, Sinn’s family of Frankfurt Financial District (Finanzplatz) watches is also targeted to such a group of dedicated professional users, who in this case don’t dress in uniforms of special forces, but bespoke suits.

Like the Mission Timers, the Financial District watches are also tailored to the individual needs of those who wear them. If you are a stockbroker, you need to know when the world’s most important stock exchanges open and close. To manage this challenge, the Sinn 6060 shows you no less than three different time zones at once. 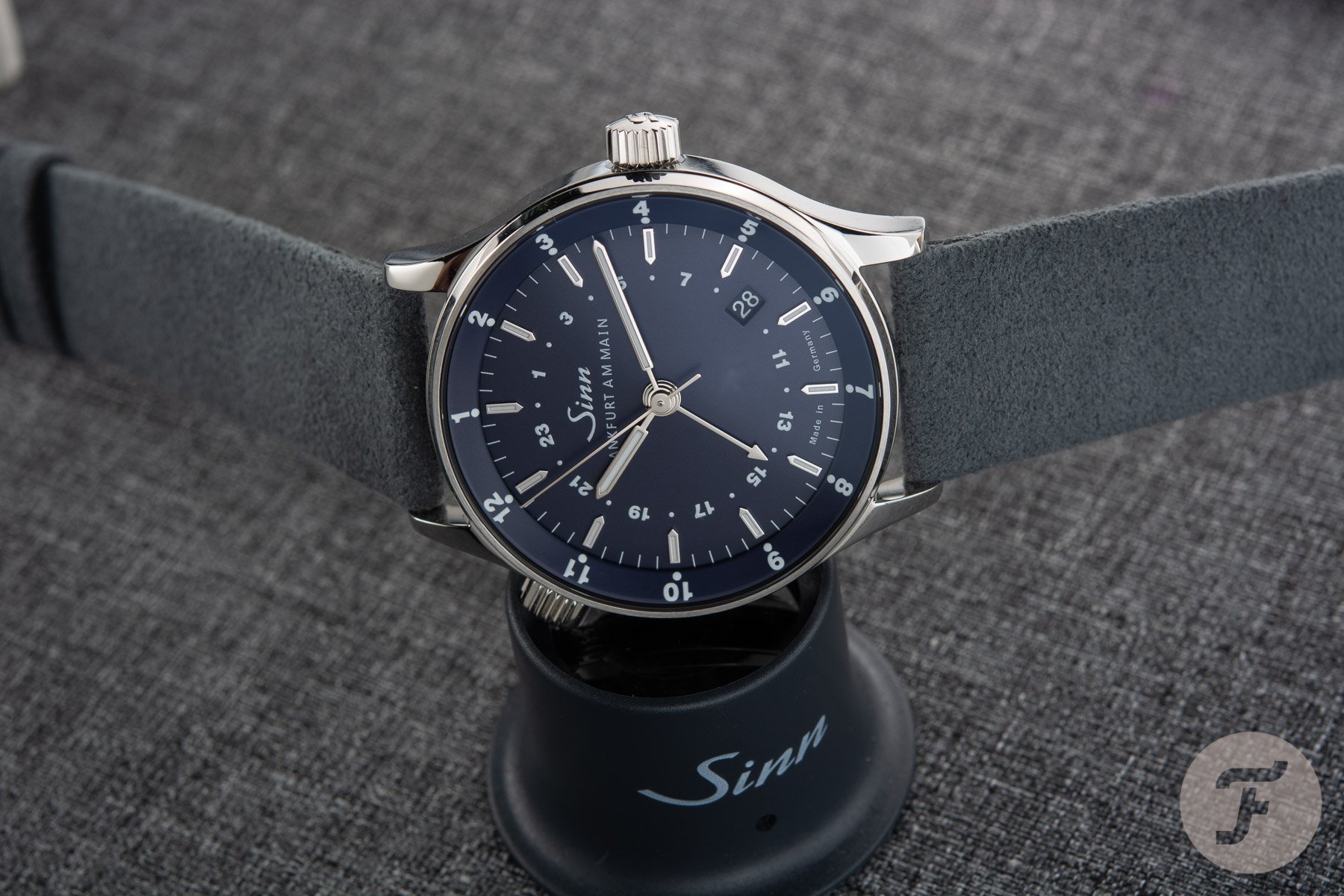 Three time zones on one dial

The first time zone is shown by the usual set of hands for hours, minutes, and seconds (seconds count in that business!). The second time zone on the Sinn 6060 F.A.Z is indicated by a hand carrying a small arrow, which points to a 24-hour scale that is located on the inside of the hour markers. 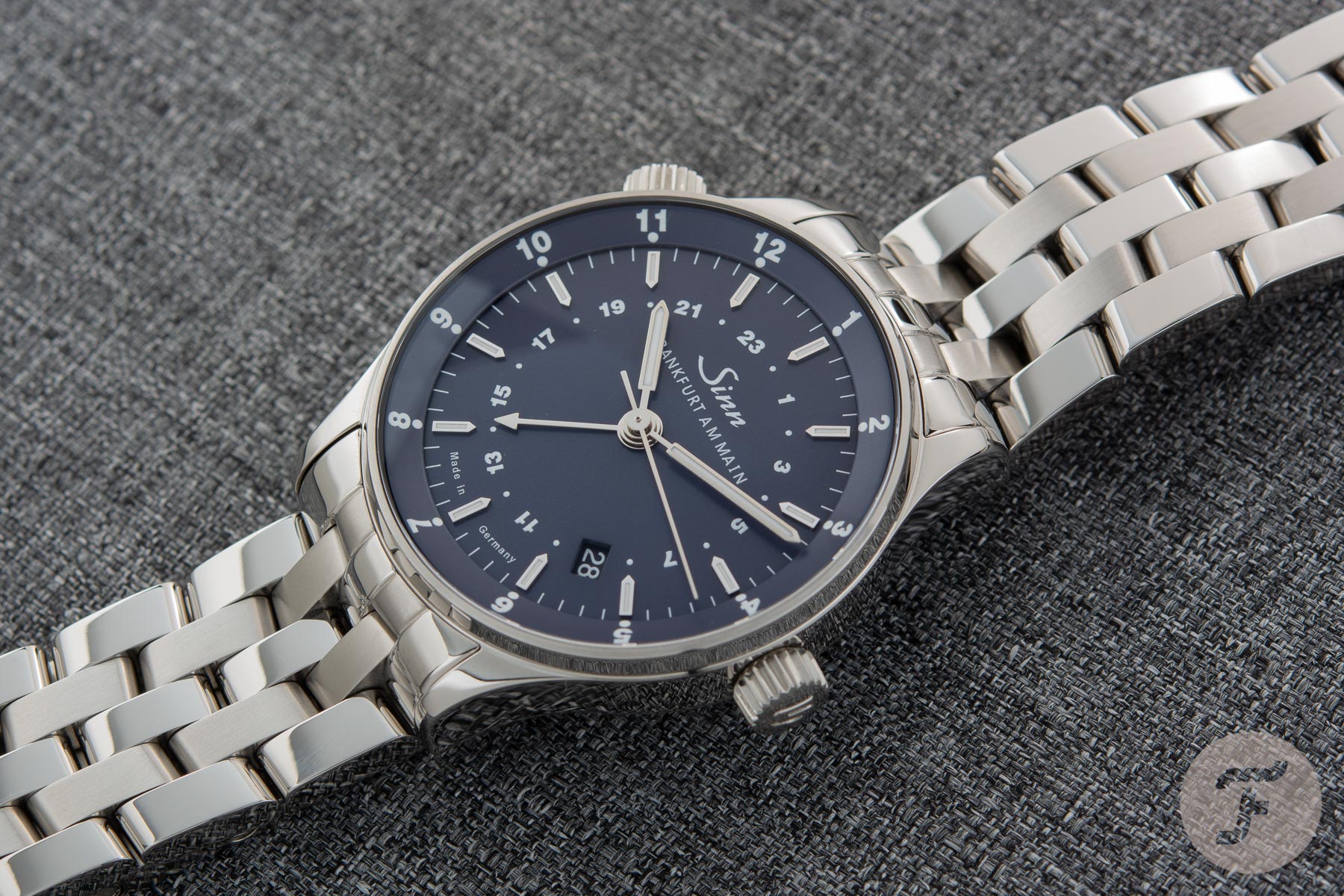 As simple as this design is, as effective it is. In its clarity, Sinn’s answer to this challenge is a smart solution.

You can set this second time zone via the crown pulled out to its middle position. When you turn the crown counter-clockwise in this position, it sets the date, which is shown in a window at 4:30. When you turn it clockwise, it moves the arrow hand in hour increments.

Finally, you can set the third time zone by turning the rehaut via a second crown, located at 10 o’clock. On the rehaut, you will find the numbers from 1 to 12 are printed. The ring that constitutes rehaut also latches in hour increments.

As simple as this design is, as effective it is. You see all three time zones simultaneously, without the different indications interfering with each other. The dial is not cluttered at all. Considering the fact that there are three different time indications, the dial is downright clean.

Different brands have invented numerous solutions for world time indications in watches. Some of these include rather complicated and accordingly impressive mechanisms. In its clarity, Sinn’s answer to this challenge is a smart solution.

You can quickly identify the F.A.Z. special editions among Sinn’s Financial District watches by their dark blue silk-mat dials. Blue dials have become very popular, and there is a reason for this. A blue dial creates less contrast to the silver surfaces of a steel case than a black dial, therefore resulting in a more discreet overall appearance of a watch. The silk-matte surface of this special edition dial even extends this discreetness by eliminating shiny reflections, which, of course, also improves readability. The hour markers here are applied, all other indications are printed. 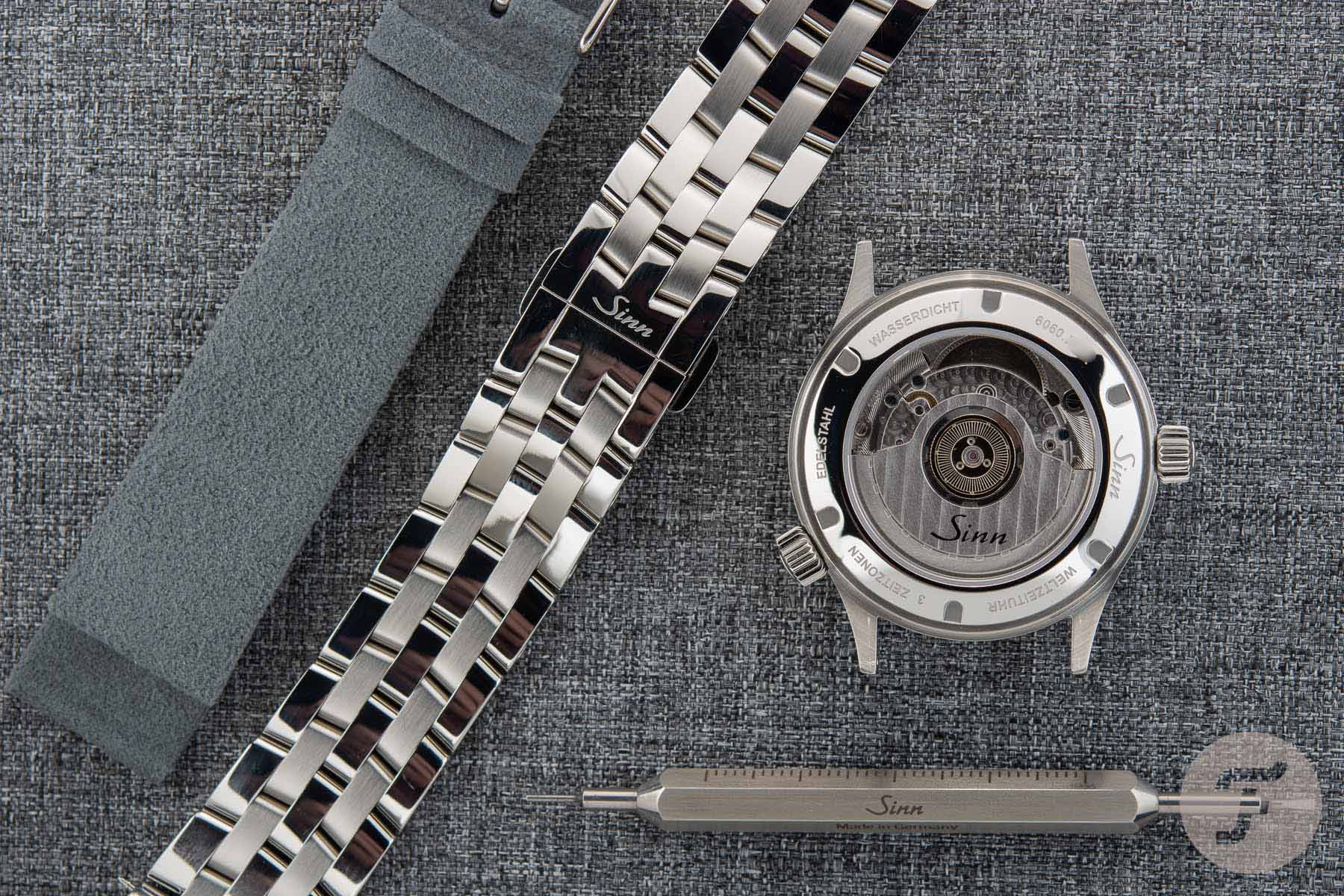 The other indication of a F.A.Z. special edition is the engraving on the rotor. It carries the logo to the F.A.Z. campaign “Kluger Kopf” and the unique number. As a hint to the 70th anniversary, this watch is dedicated to, the rotor of the Sinn 6060 F.A.Z. also bears the year numbers 1949 and 2019. Unfortunately, Sinn could only present a prototype that does not have that particular engraving on the rotor. I show you the back of this Sinn 6060 anyway to give an impression of the screw-down back and the view on the ETA 2893-2 movement inside. 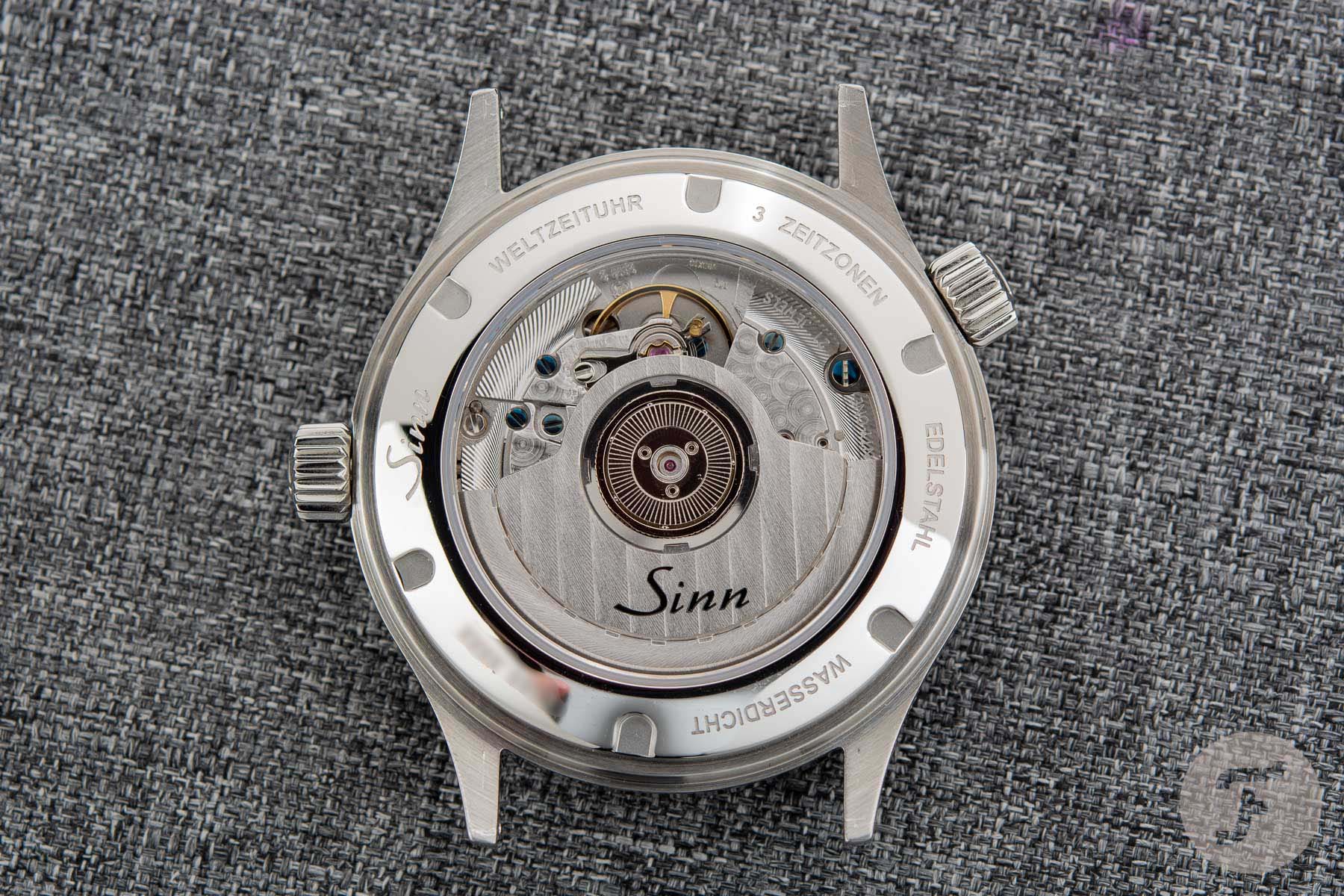 As you can see in the images, the bezel of this watch is almost non-existent. There is just enough material to hold the crystal. Only a small step extending the shape of the case is enough to add some finesse to its appearance. The case is entirely polished. The lugs are thin and gently rounded. They form the transition from the case to the bracelet. These lugs bend downwards just a little bit which is suitable for the modest case diameter of 38.5mm. The dial, including the rehaut, dominates the visual appearance of this watch is.

This visual consistency is only affected by the two crowns, and this is the only aspect I need to get used to. Regarding the modest size of this watch, the two crows are prominent. While I could comfortably live with the standard crown at 3 o’clock, there is another one at 10, which has about the same, if not identical, size. While these substantial crowns provide comfortable use, they impair the discreetness created by that beautiful dial. Maybe we need to remember that this is a certain kind of tool watch made by a tool watch specialist and accept this trade-off. 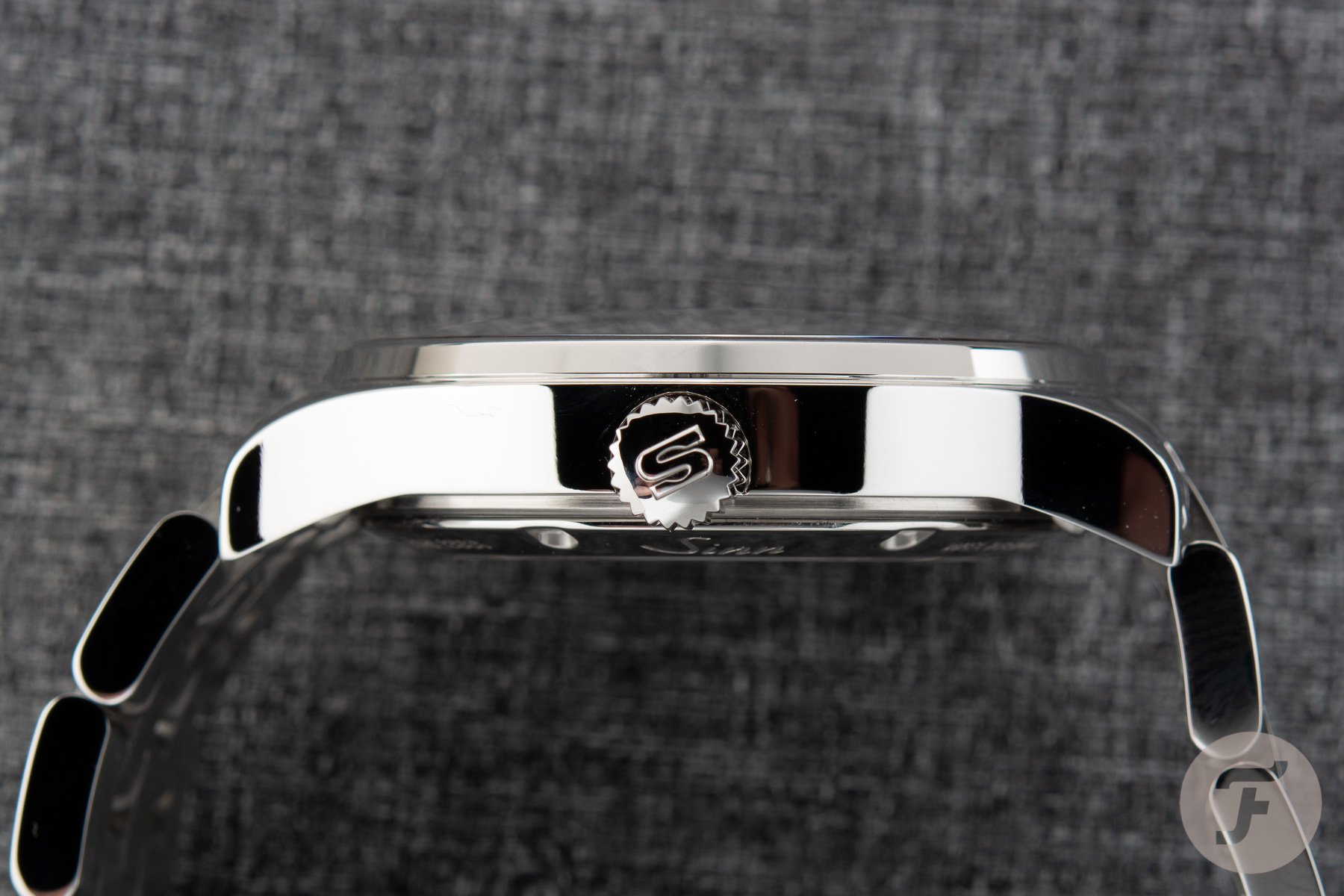 Sinn equips their watches with two types of bracelets in various executions. For the Sinn 6060 F.A.Z. they chose the bracelet with five rows of links. The central and outer link rows are polished, and the other two rows are brushed on the outer side of the bracelet. At the inside of the bracelet and its edges, all links are brushed. When you examine the edges of the bracelet closely, you can see that the entire outer edge encompassing each link is chamfered and polished. Considerable effort has been put into the finishing of this bracelet. 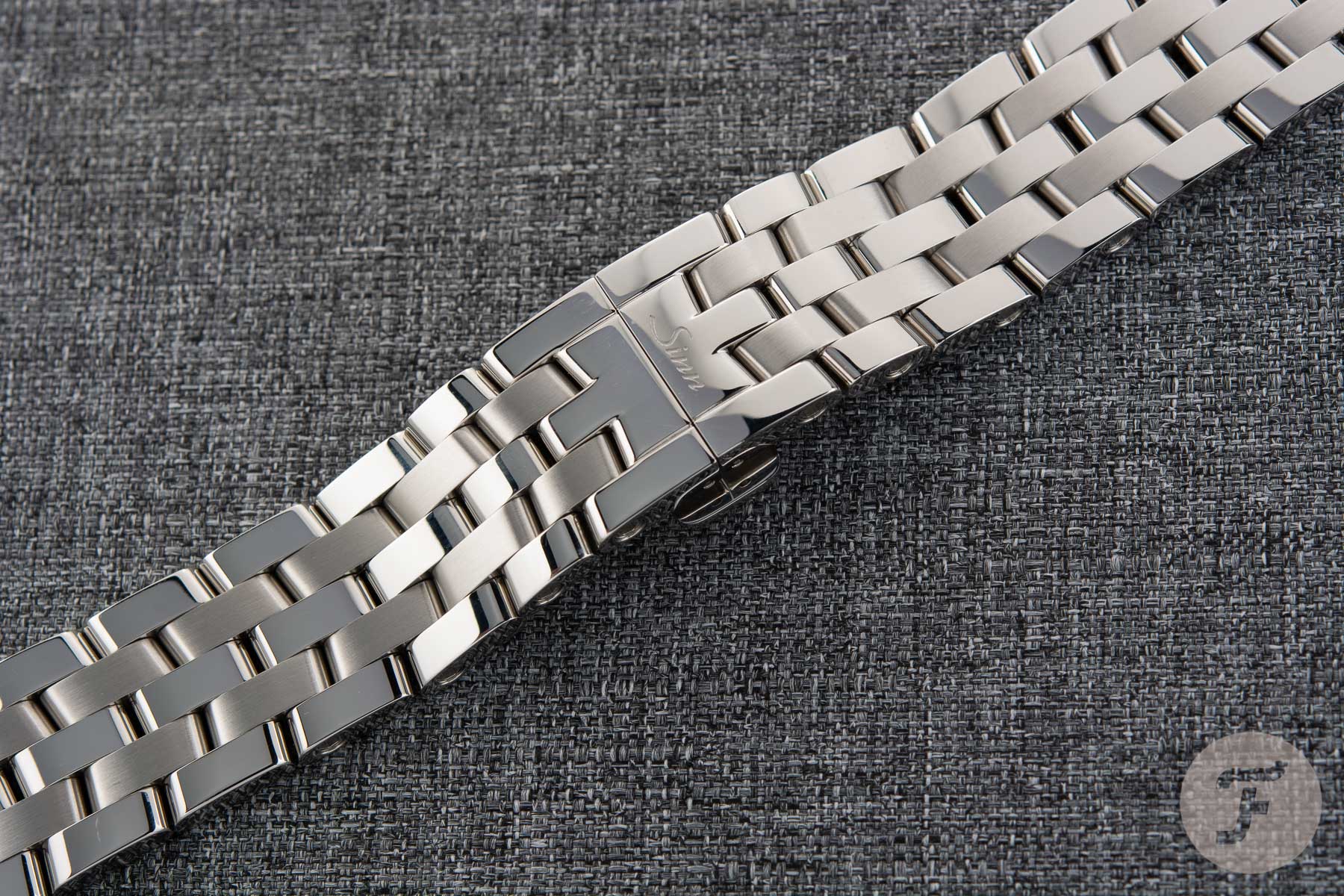 The bracelet is quite comfortable and does not feel heavy. It is closed by a butterfly clasp that functions smoothly and reliably. The bracelet adds elegance to the visual appearance of this watch. Caused by the vast number of polished surfaces, it might be a bit too much elegance for some.

Few people will truly need a watch which is capable of showing three time zones. But if you belong to them, there will hardly be any other watch that solves this task better than the Sinn 6060.

Concluding thoughts on the Sinn 6060 F.A.Z

The wrist shot shows that the Sinn 6060 F.A.Z. despite its diameter of less than 39mm, it does not appear small. It wears comfortable. The blue hue of the dial is present but subliminal. In combination with the plaid blue shirt I wore at Watchtime Düsseldorf, it looks almost sporty. Worn with a white shirt you can expect it to appear sharp. In addition to the bracelet, the watch comes with a grey Alcantara strap, which is closed with a pin buckle and creates another different look. 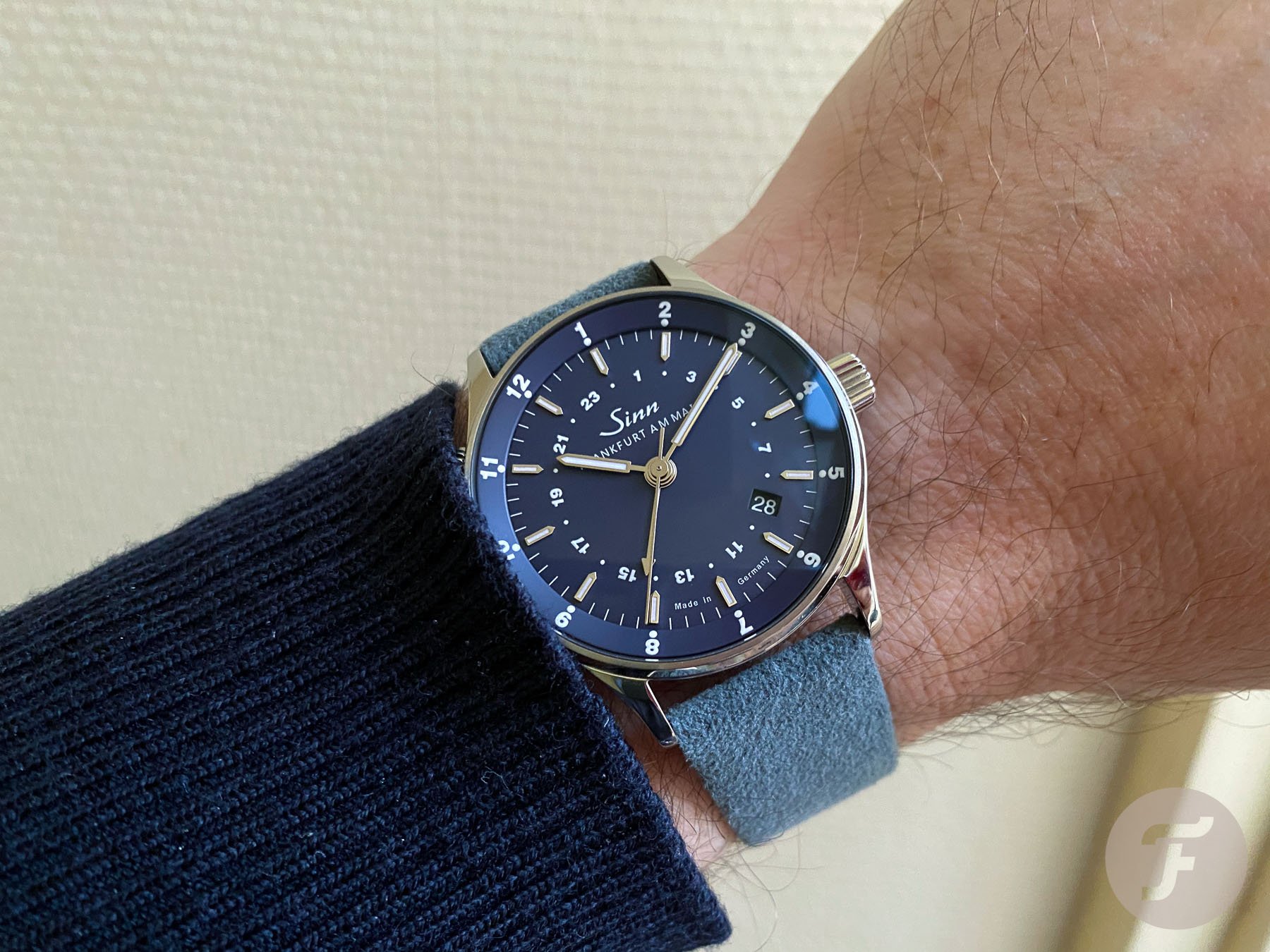 Few people will truly need a watch that is capable of showing three time zones. But if you belong to them, there will hardly be any other watch that solves this task better than the Sinn 6060.

The Sinn 6060 F.A.Z. is limited to 70 pieces corresponding to the anniversary it commemorates. It can be ordered for 2770 Euros from the F.A.Z. online shop, and you can buy it at Sinn’s stores in Frankfurt. Should this special edition be sold out quickly, there is also the standard edition of the Sinn 6060 with a black galvanized dial in sunburst finish.

For further information on this and other watch models from Sinn head to their homepage.