Oversized watches… Are they still a thing in 2022? Sometimes, that seems hard to believe. These days, a lot of brands are hitting many collectors’ sweet spot of around 40mm or even a bit smaller for the slender-wristed folks. This is something I see confirmed in the Fratello offices. The majority of people at Fratello probably find their sweet spot between 38mm and 40mm. Some even prefer to go with smaller timepieces than that. So where does that leave oversized watches? The Zenith Defy Extreme Carbon shows that there is still plenty of charisma and technical prowess to be found in large sports watches. It is an ultra-light and wearable option that shows remarkable versatility.

A first glance at the Zenith Defy Extreme Carbon and you are immediately taken to the world of luxury oversized sports watches. It’s the world of the Audemars Piguet Royal Oak Offshore and the Hublot Big Bang Unico. But come to think of it, there are not a whole lot of brands that produce these luxury modern sports watches on steroids. Sure, you can add Richard Mille to that list, but that’s a different ball game in terms of budget. The Zenith Defy Extreme line fits perfectly in between the Royal Oak Offshore and the Big Bang Unico. It’s where Zenith shines by combining ultra-light materials with a spectacular movement. On top of that — and this might come as a surprise to some — the new Defy Extreme Carbon brings great versatility and wearability. Time to explain why. 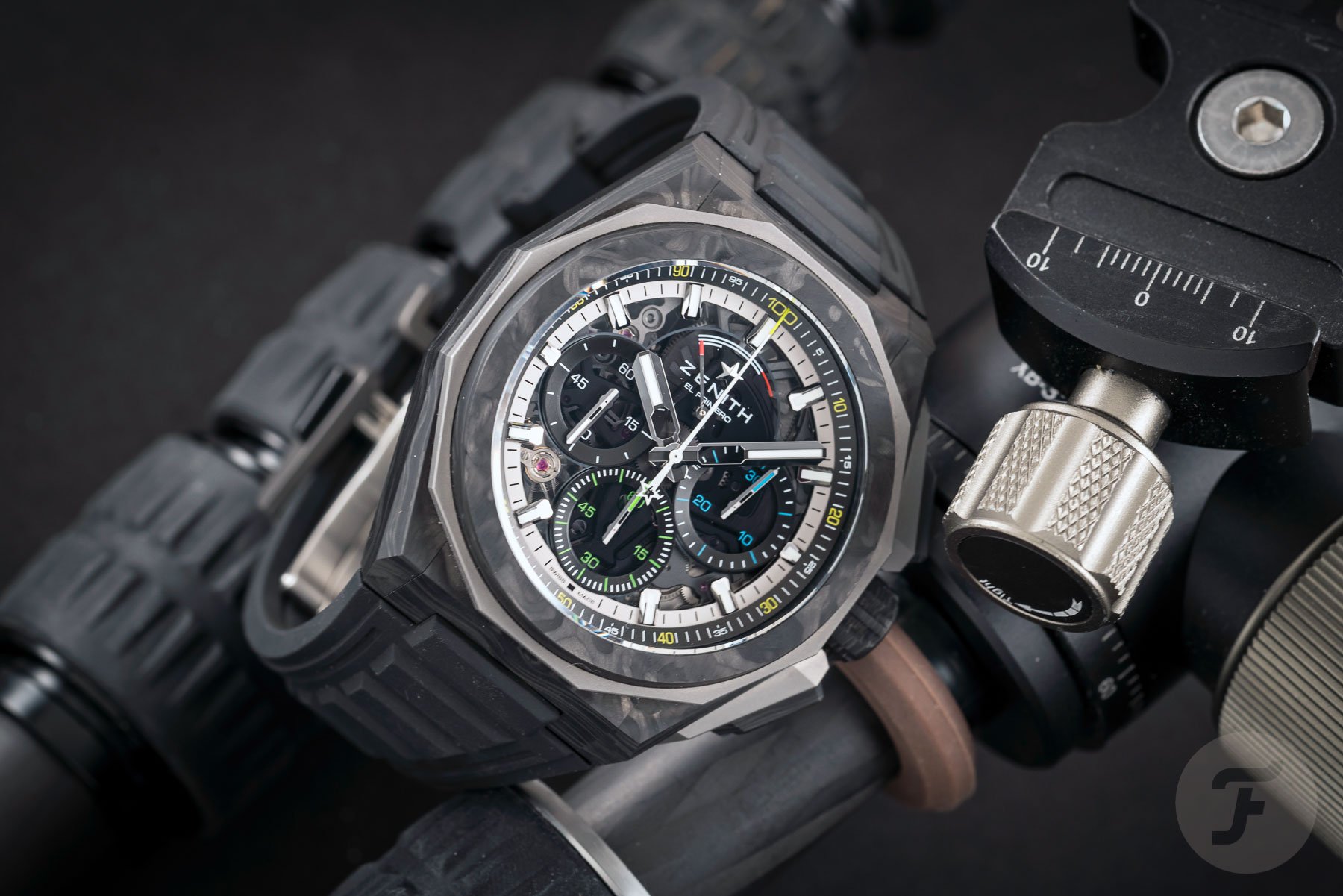 The versatility of Zenith

It’s pretty safe to say that if you are not a fan of these oversized luxury sports watches, this Defy Extreme Carbon not going to change that. It perfectly fits into the category that I just described. The watch doesn’t make any excuses for itself, nor does it have to. The Defy Extreme collection is definitely not my favorite within the Zenith lineup, but that’s more a result of a great number of brilliant options than a lack thereof. As some of you might know, I am a fan of Zenith. I adore the Chronomaster Revival line, and the A384 is high on my wishlist. On top of that, the Defy Classic and Defy El Primero 21 are two more lines with some great releases. 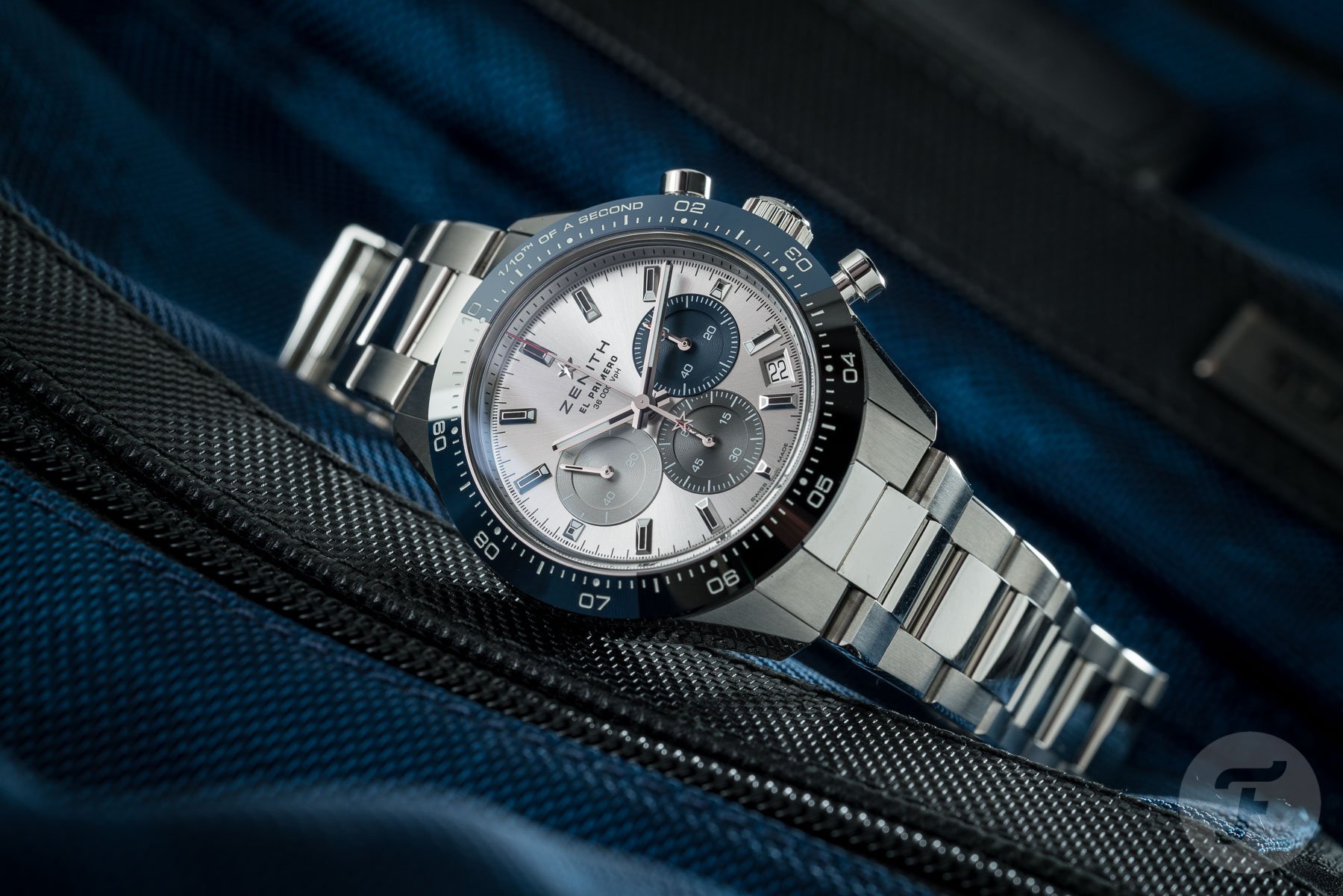 And after raising an eyebrow when it first came out, I have even found a great appreciation for the Chronomaster Sport, especially the rose gold versions that Zenith introduced during Watches And Wonders earlier this year. They are great additions to a line that has been heavily discussed and debated. While I was definitely a skeptic as well, the so-called “Zaytona” has grown on me a lot. And many watch fans seem to love it as well, with the Chronomaster Sport becoming a big success for the brand. 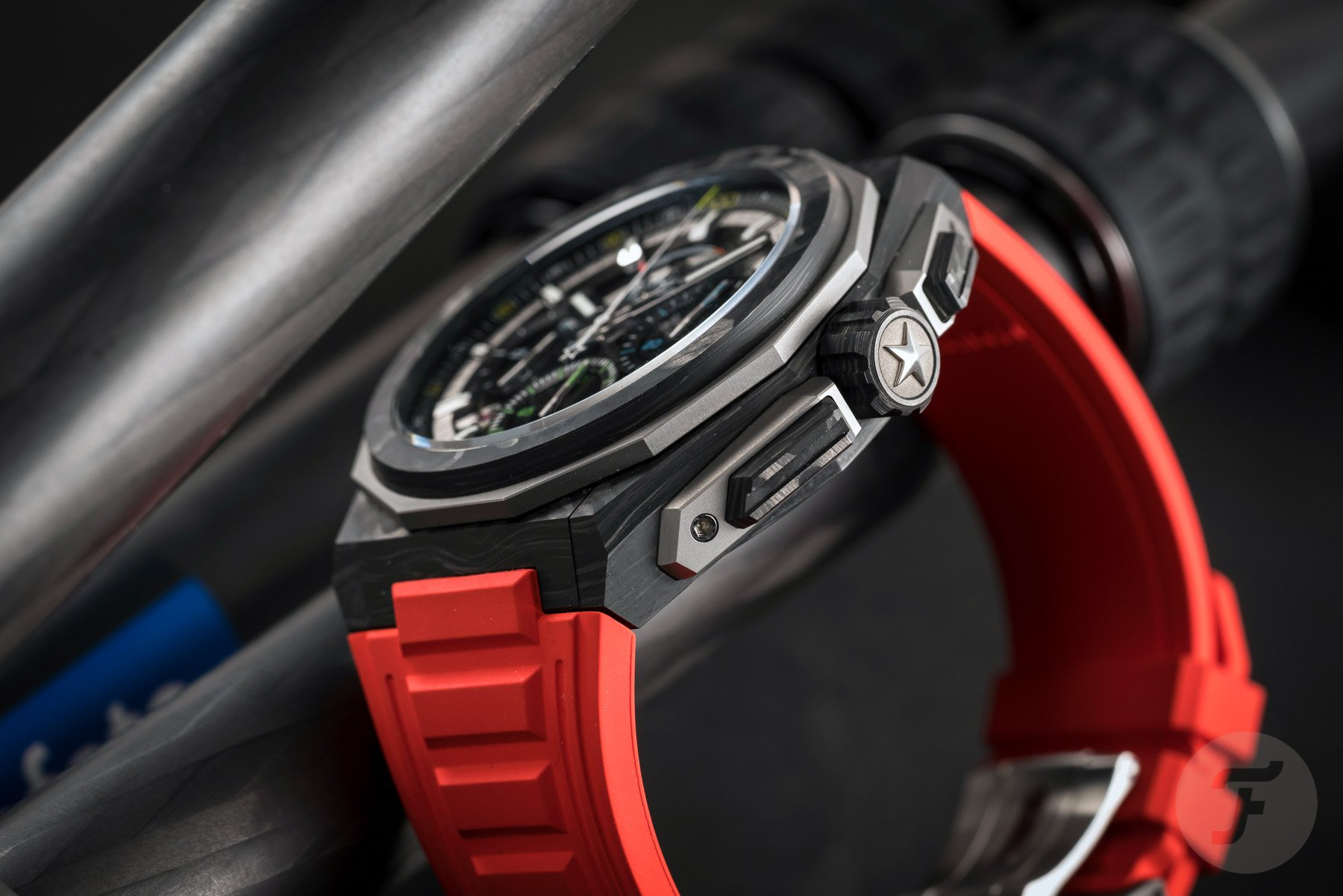 The Defy Extreme Carbon as a concept

Having said all that, you probably understand that the Defy Extreme is not the number-one Zenith collection that I would gravitate towards. I must say, however, that some of the releases have triggered my curiosity. The first was the titanium model that we had in for review last year. Brandon wrote a great in-depth review of the watch explaining not only why it makes sense for Zenith but also why it’s an incredibly impressive timepiece. I had the chance to wear it for a couple of days and was also impressed by its size, materials, finish, and great 1/100th-of-a-second automatic high-frequency chronograph movement. But its size in combination with the titanium bracelet also makes it a big boy. Wearing it on a rubber strap helped to make it somewhat less in-your-face. 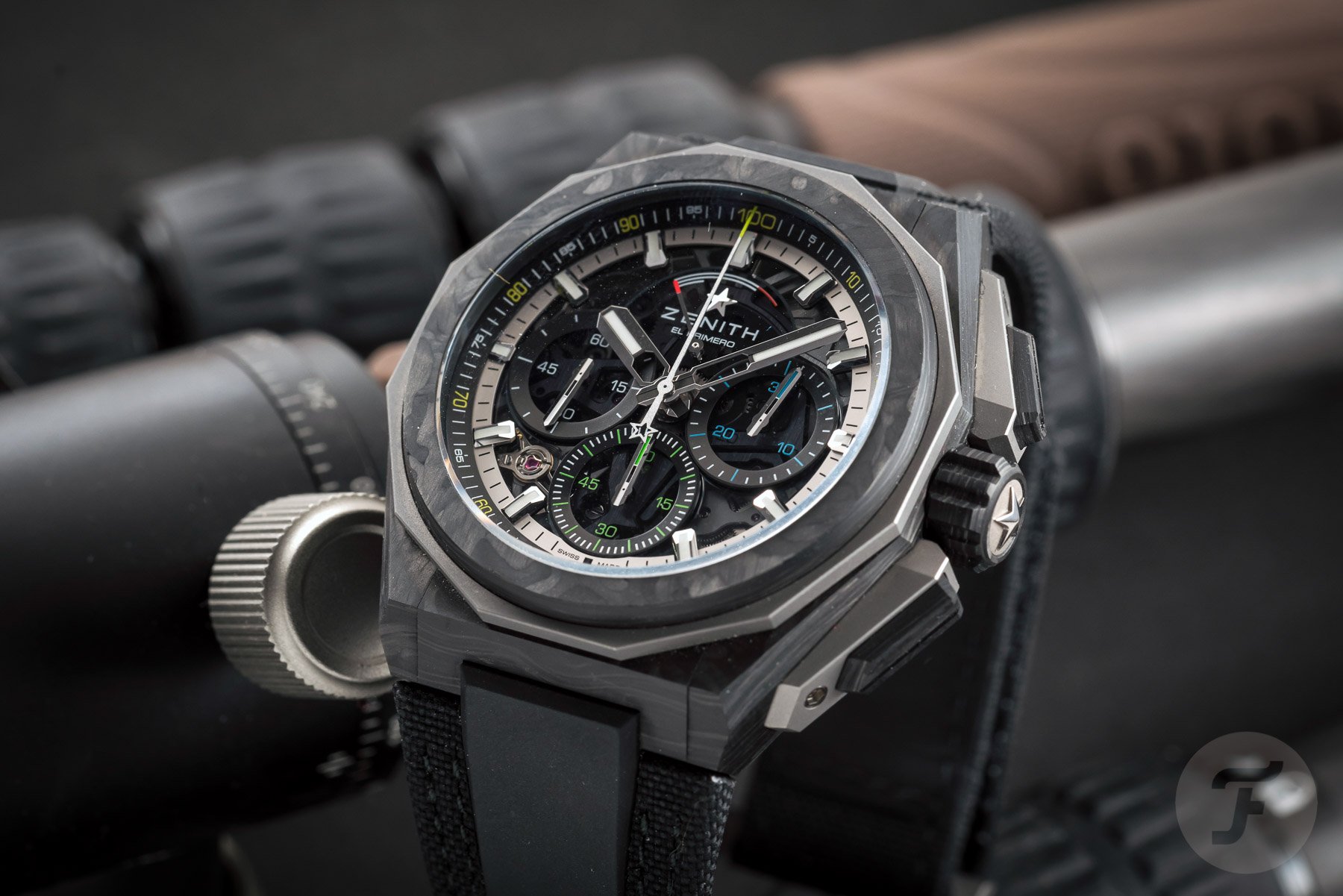 My personal favorite of this line has been the Defy Extreme Desert that Dave wrote about in November of last year. The combination of colors and materials in that watch made it the hands-down winner for me. When Zenith announced the release of this Defy Extreme Carbon, however, I started to doubt my preferences. This is another new take on the brand’s extreme sports watch combining high-end materials with a change in appearance. The stealthy guise is definitely attractive to someone who enjoys black watches like me. So it had me questioning, was it actually better than the Defy Extreme Desert? 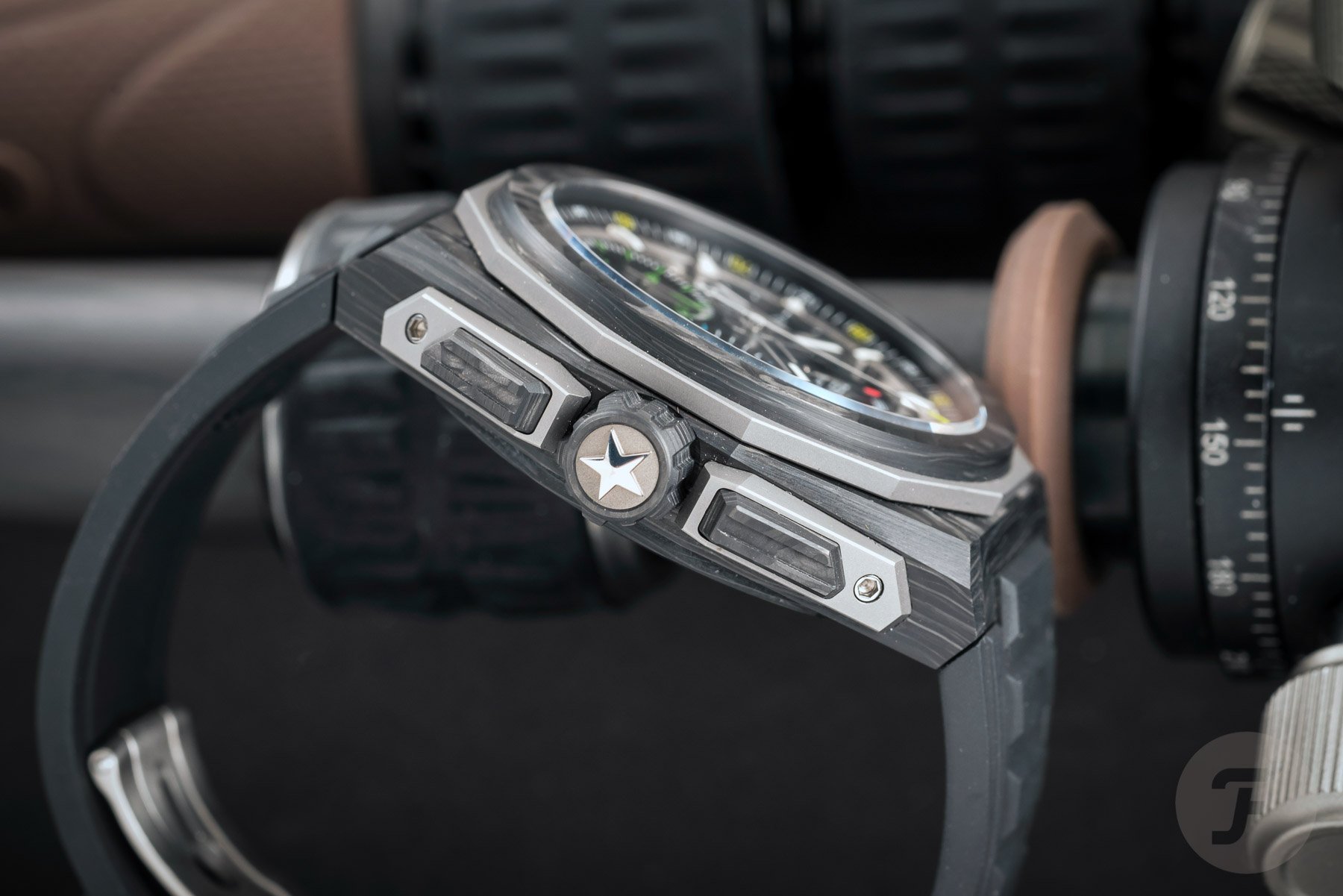 The specs of the Defy Extreme don’t lie

Before we answer that question, let’s look at some specs of the Defy Extreme Carbon. The watch features a 45mm carbon case that is 15.4mm thick and 200m water-resistant. The pushers, the crown, and the inner portion of the bezel are also fashioned in the same carbon material. The pusher protectors and the dodecahedral ring of the 12-sided bezel are made of micro-blasted titanium. If you see the watch up close, it reveals a great level of detail. The shapes and angles combined with the modern materials create an overall ultra-technical look that I like. It fits the concept of the Defy Extreme line perfectly. 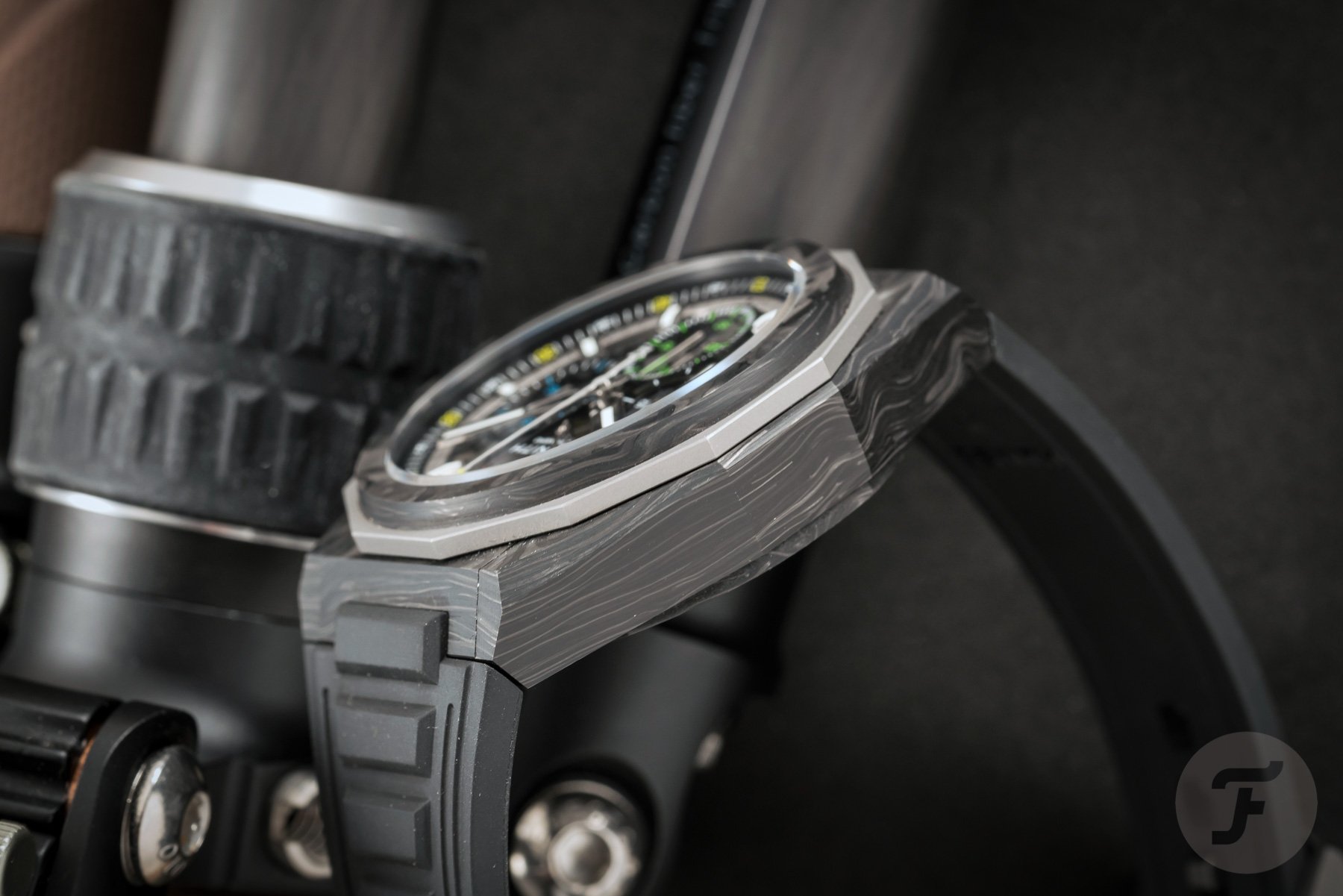 The dial adds even more to that technical appearance. The open-worked dial gets an injection of color in the chronograph counters for the Defy Extreme Carbon. They are executed in bright blue, green, and white. The colors are inspired by Extreme E racing, of which Zenith is a founding partner and official timekeeper. You will find the 1/100th-of-a-second chronograph scale on the outside of the open dial. It features bright yellow print for an extra hint of color. The watch comes with three different straps. The first is a black rubber strap, the second is a bright red rubber strap, and the third is a black Velcro strap. All come equipped with a carbon fiber buckle. As you can see throughout this article, the difference in appearance between the red and black straps is striking and changes the presence of the watch tremendously. 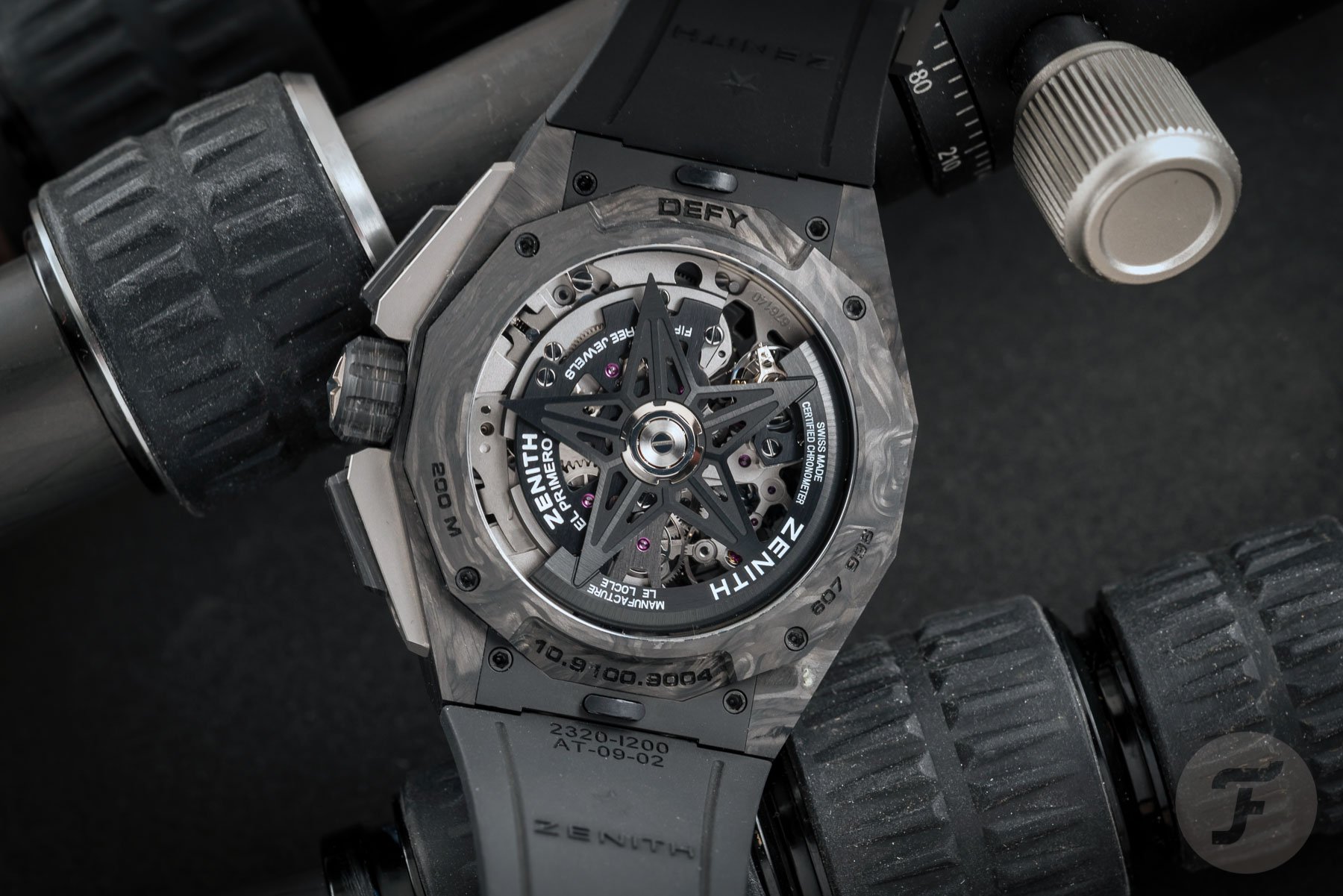 If you turn the watch around, you will be greeted by the black star-shaped oscillating weight of Zenith’s caliber 9004. We have also seen this spectacular movement in the previously released Defy Extreme models. It’s what makes this watch even more special and sets it apart from competitors in the same field. The impressive movement features two separate escapements with dedicated barrels. The first is used for standard timekeeping and the second is used for the chronograph. On top of that, the caliber also runs at two different frequencies. 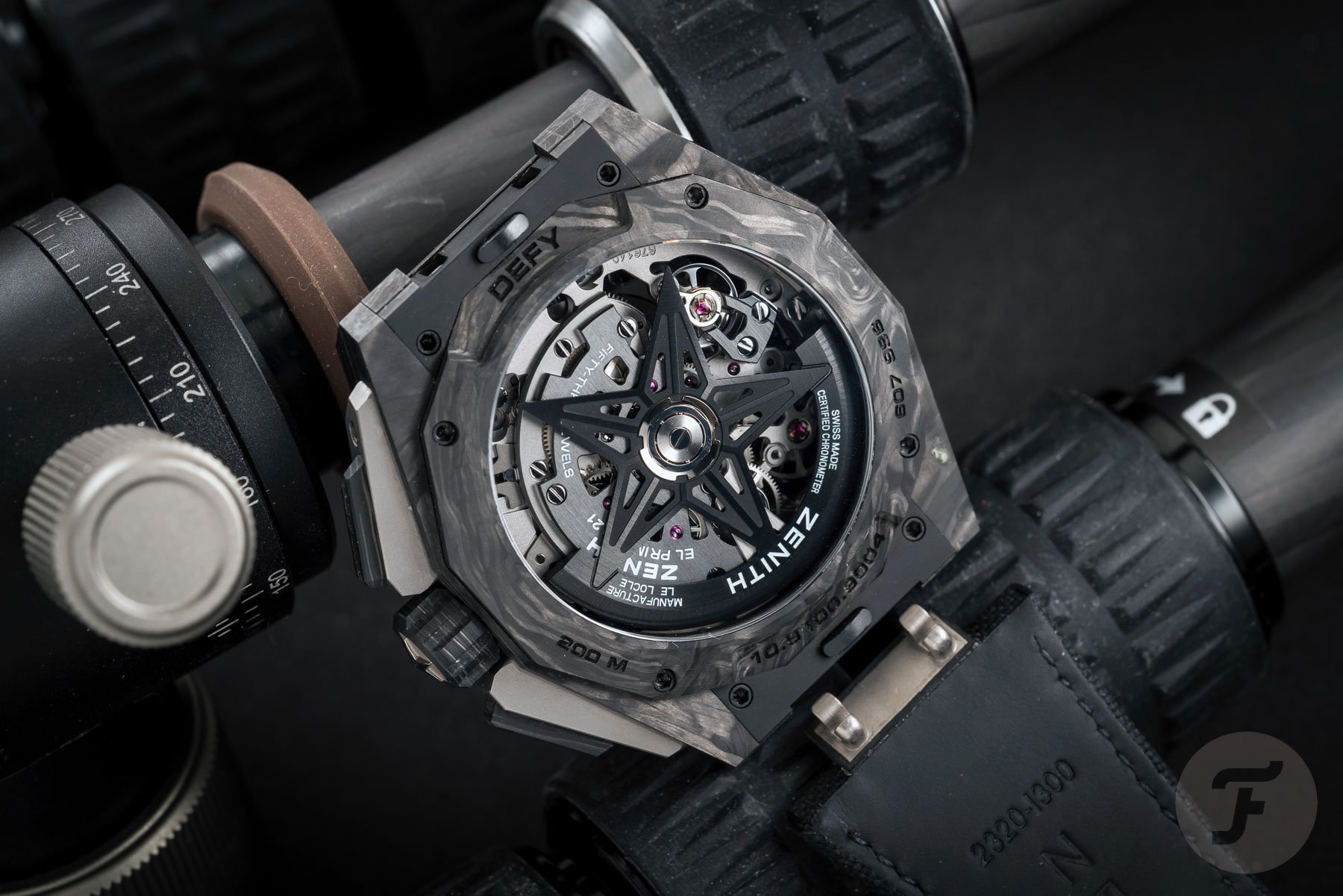 For the general timekeeping functions, the movement uses the familiar El Primero frequency of 36,000vph. The chronograph, however, operates at a bonkers 360,000vph. It makes it possible to accurately measure elapsed time to 1/100th of a second. The chronograph hand flies around the dial in exactly one second. It is the perfect extreme complication that fits the character and the purpose of this extreme chronograph. 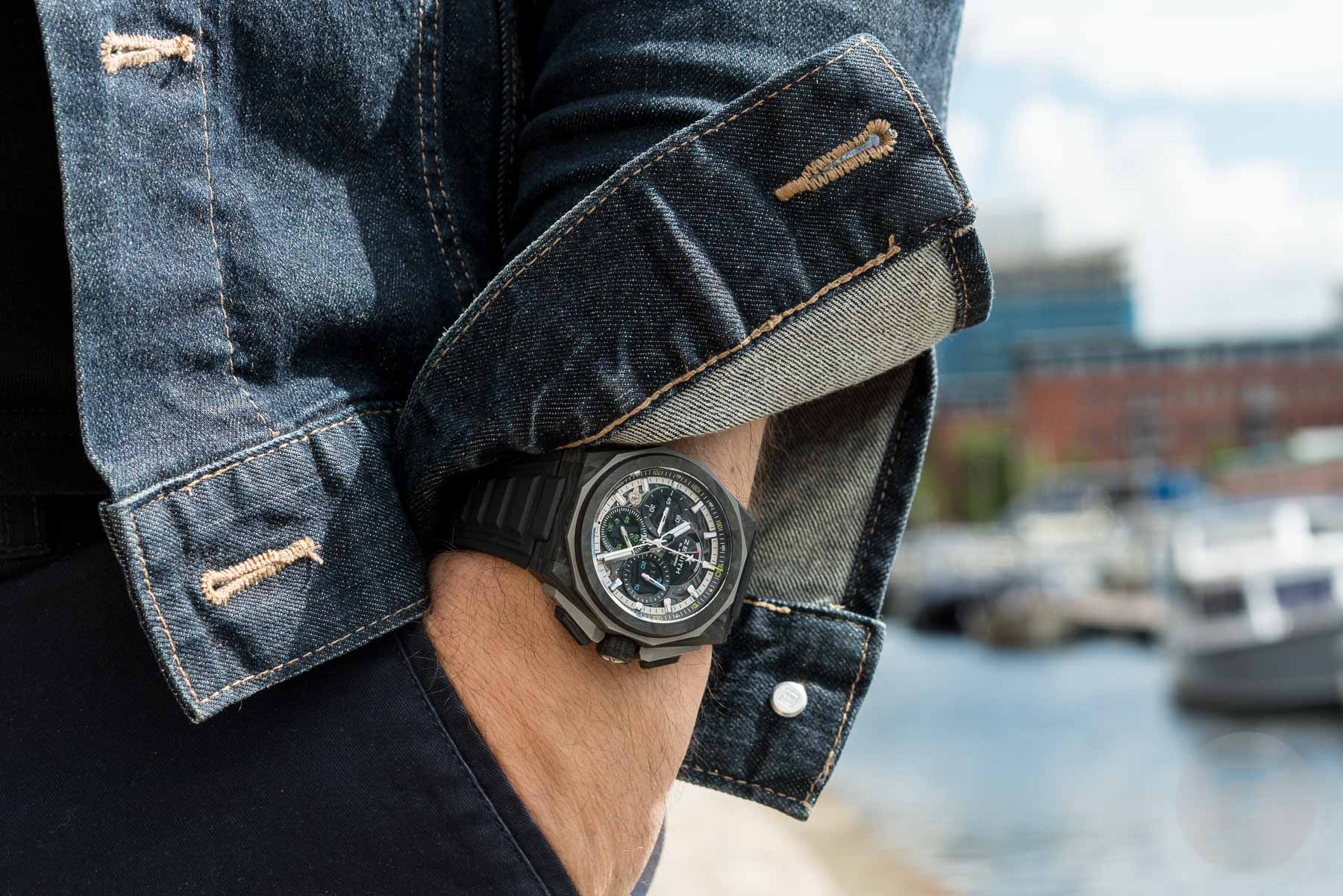 When I first put the watch on my wrist, it was on the black rubber strap. Needless to say, the 45mm case size lets you know you’re wearing a serious timepiece. Even with the black aesthetic, the watch is very much present on your wrist. Having said that, the combination of carbon, titanium, and rubber makes for a very light watch considering its size. Additionally, Zenith has made sure that the design is very ergonomic. The angle at which the strap sits ensures that it wraps easily around your wrist. On top of that, the strap is wide, so the balance is perfect. 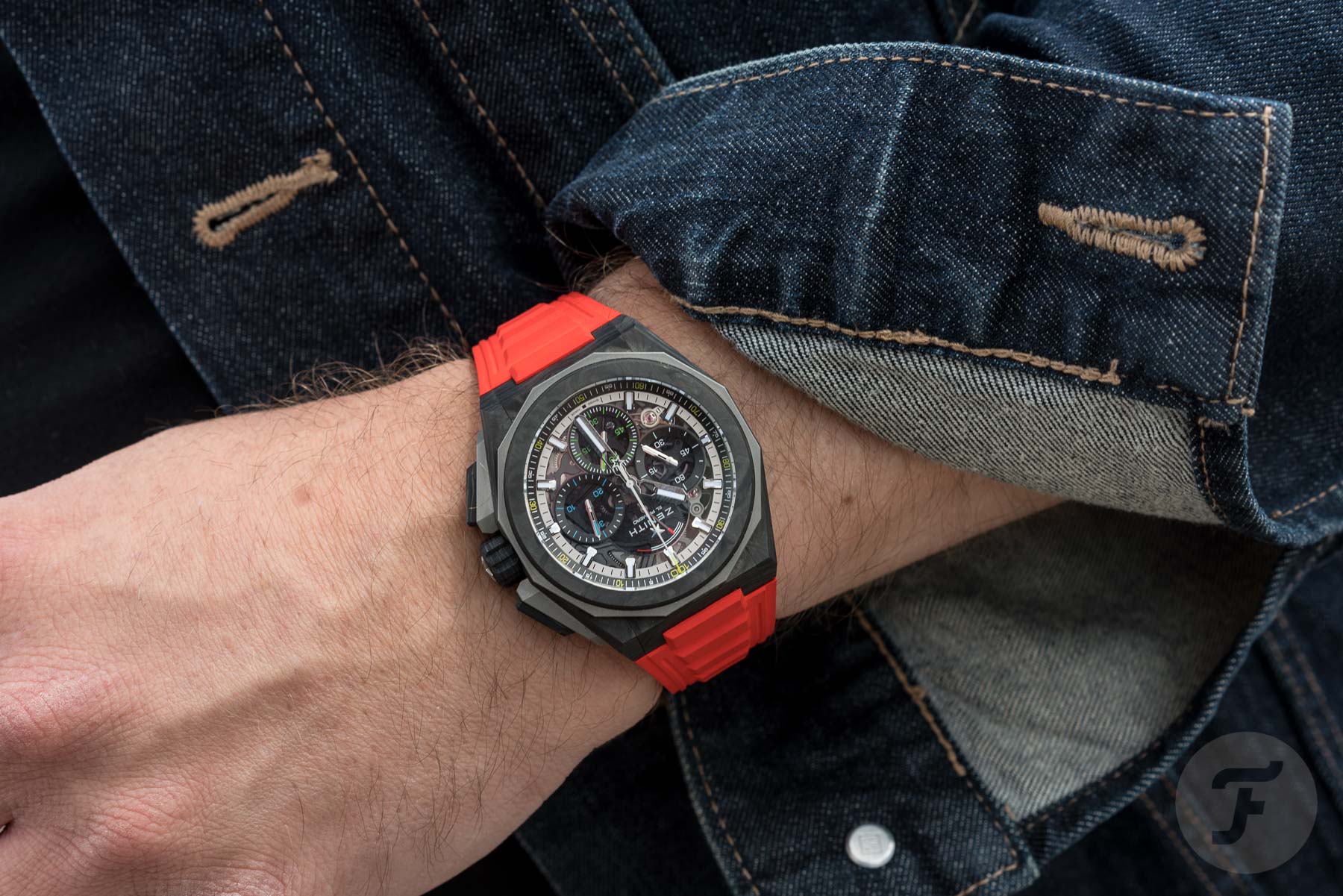 Speaking of the straps, Zenith uses its single-button quick-release system for the Defy Extreme line. I have to say that I found the ease of changing straps quite impressive. Simply push the button on the back of the case and lift the strap a little to take it off. It really made it a joy to switch between the different straps. After I had had enough of the stealthy look, I changed to the red rubber strap, which completely changes the aesthetic. As a result of the red strap, the colors on the registers also pop a little more. The strap somehow gives them a little more presence. I actually liked wearing the watch on the red strap a lot. 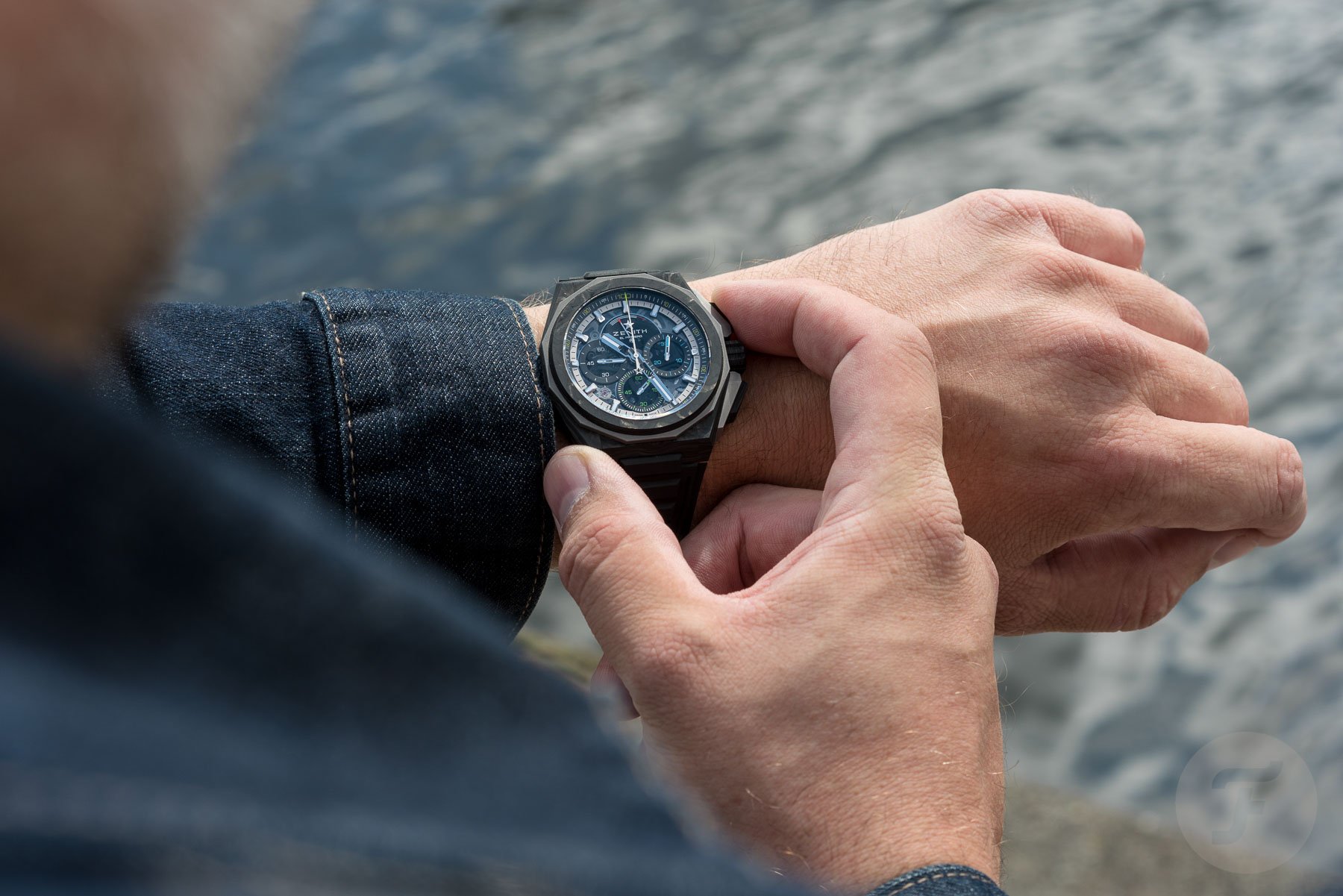 It also looked very nice on the wrists of some of the other Fratello team members. I was pleasantly surprised when Lex put it on his wrist on the red strap. While Lex usually likes his watches quite a bit smaller, the Defy Extreme Carbon looked very nice even on his smaller wrist. But I’m well aware that not everyone can pull this off. While I was wearing the watch, some of the other team members made remarks about how well it suited my wrist. I am a tall and big guy, so big watches generally don’t look big on my wrist. Nevertheless, my personal preference has shifted to smaller watches. But if you like a bigger watch that wears exceptionally well, this could be a great pick. 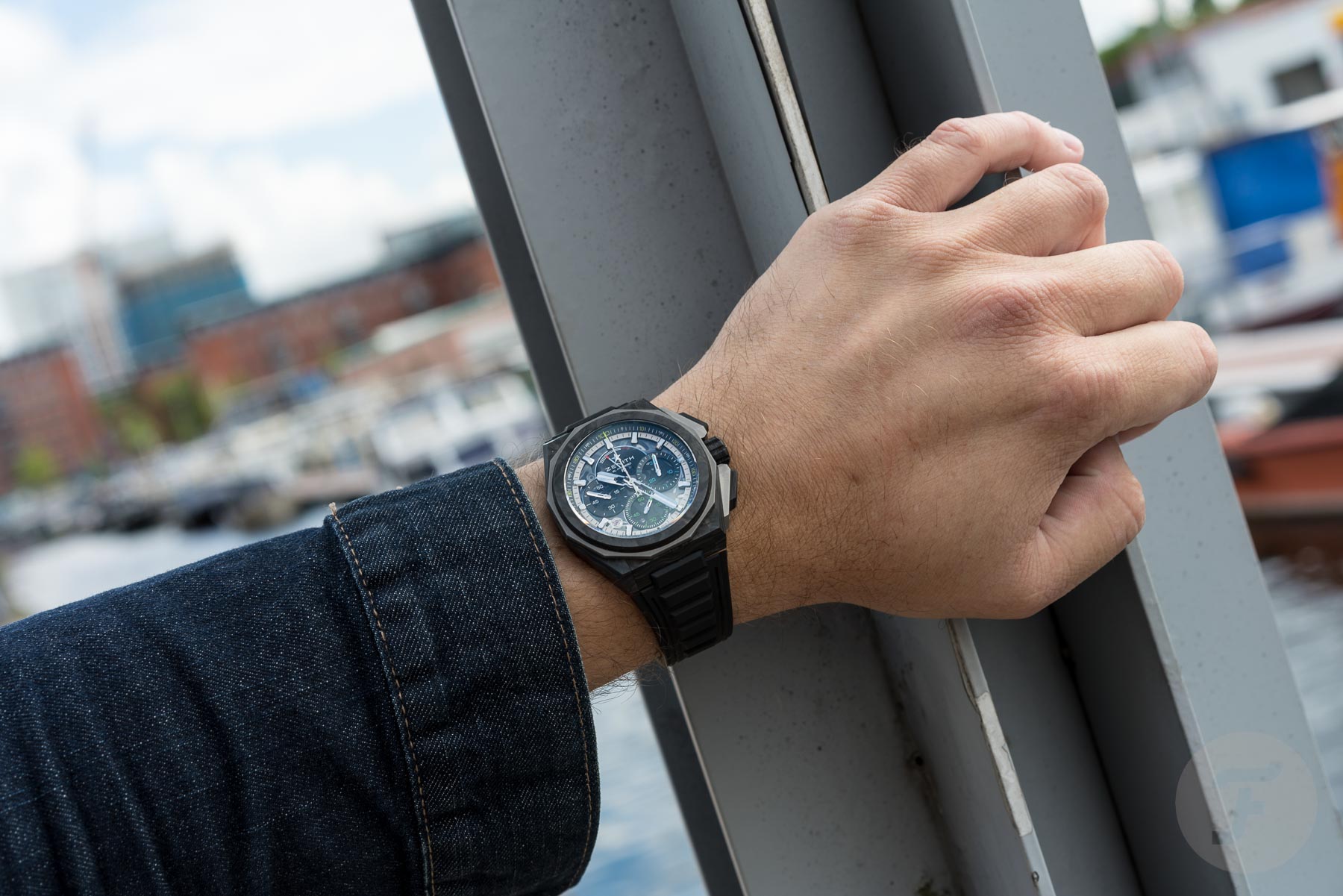 What only adds to that is the exceptional movement, of course. The 1/100th-of-a-second chronograph is a spectacular piece of watch technology. Using it is an absolute joy. A firm click of the top pusher swings the central chronograph hand into action. Seeing the white hand speed around the dial is quite breathtaking. At first, it’s almost intimidating to watch. This is not a chronograph you will activate just for fun because you will definitely see the hand race around the dial more than is good for your sanity. But all jokes aside, it is not a chronograph that you will just switch on to play with if you need to focus on something else. 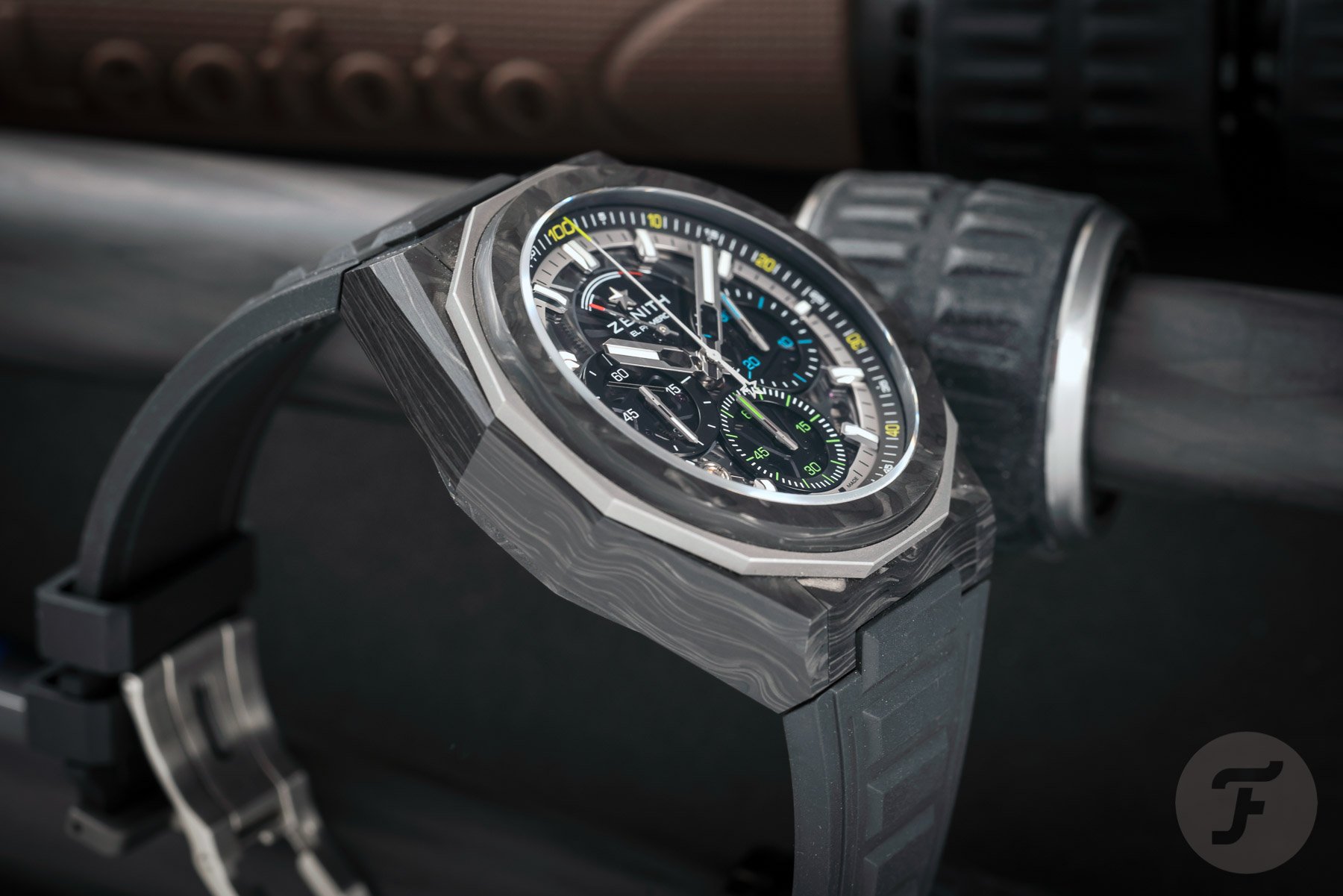 What stood out when wearing it for a couple of days, though, was how well made this watch is. From the design and the materials to the movement and finishing, it’s all executed at a very high level. After the movement, what I found the most impressive was the layered construction of the dial. It ensures that the legibility is top-notch. The large hour and minute hands combined with the big hour markers allow you to read the time easily with the skeletonized dial underneath. The second layer comprises all the chronograph functions, both at center and in the sub-dials, as well as the small seconds display. The third layer is the view of the skeletonized movement that powers the watch. 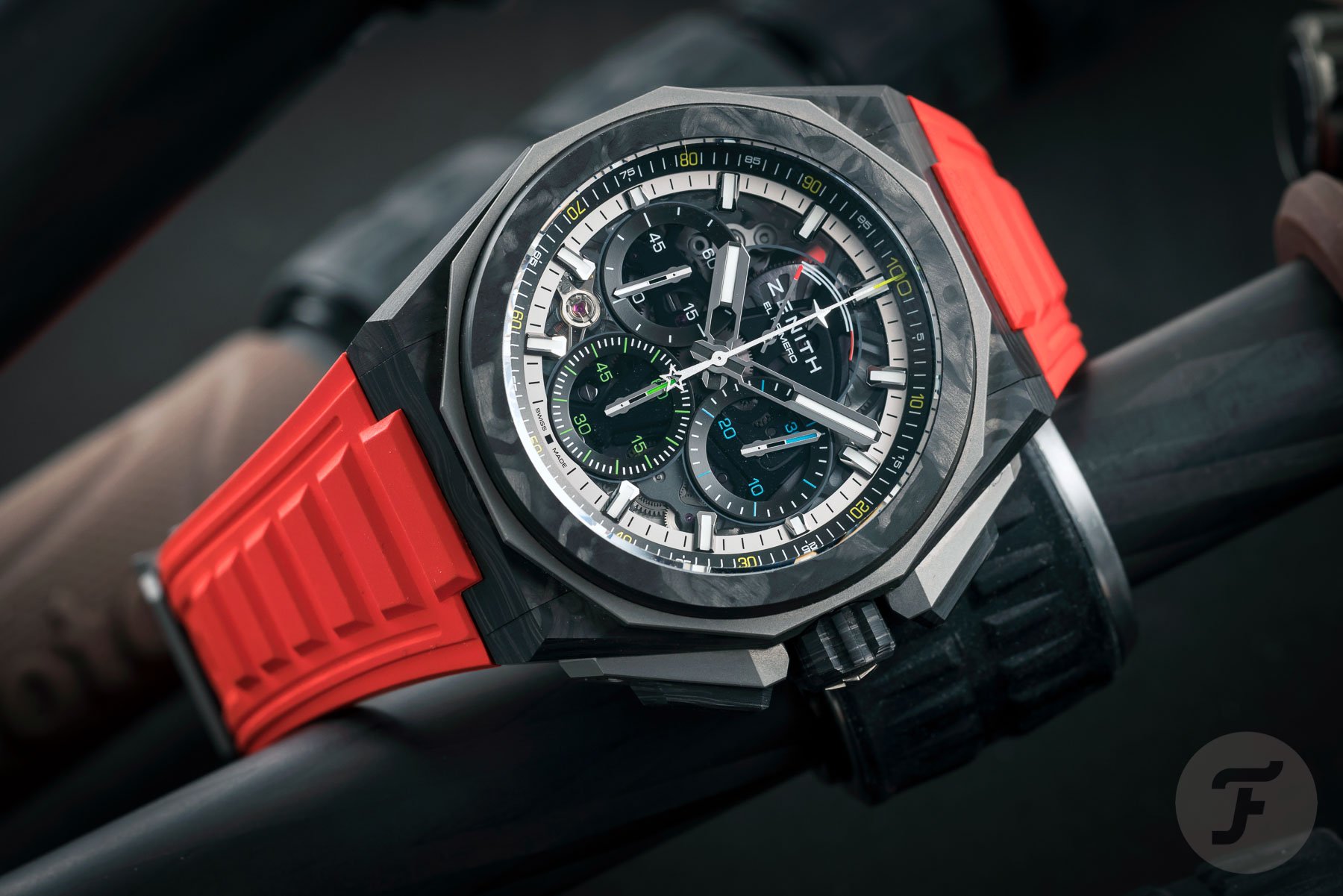 All in all, I was once again impressed by the Defy Extreme. After the titanium model that came on a brushed titanium bracelet, this Defy Extreme Carbon creates a completely different presence. While the titanium version has a more luxurious feel, this stealthy version feels more sporty and ready for some racing or outdoor adventures. For me, that is where the power of the Defy Extreme line lies.

If you like this category of oversized sports watches, it is hard to ignore the Defy Extreme line. At CHF 24,900 this is not an affordable watch in the slightest. But considering its price, materials, technology, and execution, I would pick this over many of its competitors. Would this carbon version be my pick? Honestly, that Defy Extreme Desert still takes the cake by a small margin. For me, those colors and materials are very hard to beat.

For more information, check out the Defy Extreme Carbon on Zenith’s official website, and do let us know what you think of it in the comments!