Hanhart was, and to some extent still is, a household name in Germany. Their history spans over 130 years between two countries. Hanhart was established in 1882 in Diessenhofen (Switzerland) but the company was relocated by Johann A. Hanhart, the founder, to Germany in 1902. They reached mediocre success until 1924, when Willy Hanhart (son of Johann) introduced a mechanical stop watch that was reasonable in price compared to the Swiss competition. This ignited the business and only two years after that success, Hanhart came out with their watches. However most of us know the name Hanhart because of their chronographs.

Hanhart’s first model “Caliber 40” came out in 1938 and became an instant success. So much even, that the German military forces started using their instrument. The second generation, with caliber 41 and a TachyTele scale, became the favorite watch of the pilots. However, the second half of the 1940’s was a time in which it was extremely difficult to do business. In 1948, Willy Hanhart returned to Germany and resurrected the company. Hanhart produced a number of legendary chronographs (e.g. Admiral) but also became the market leader for stopwatches. The quartz crisis in the 1970’s shook but did not break Hanhart. In 1972 they even developed their own in-house quartz movement. Hanhart stayed in business and developed many interesting watches (mostly chronographs).

Today they have 3 collections (Pioneer, Racemaster and Primus) for watches and one (Classictimer) for stopwatches. 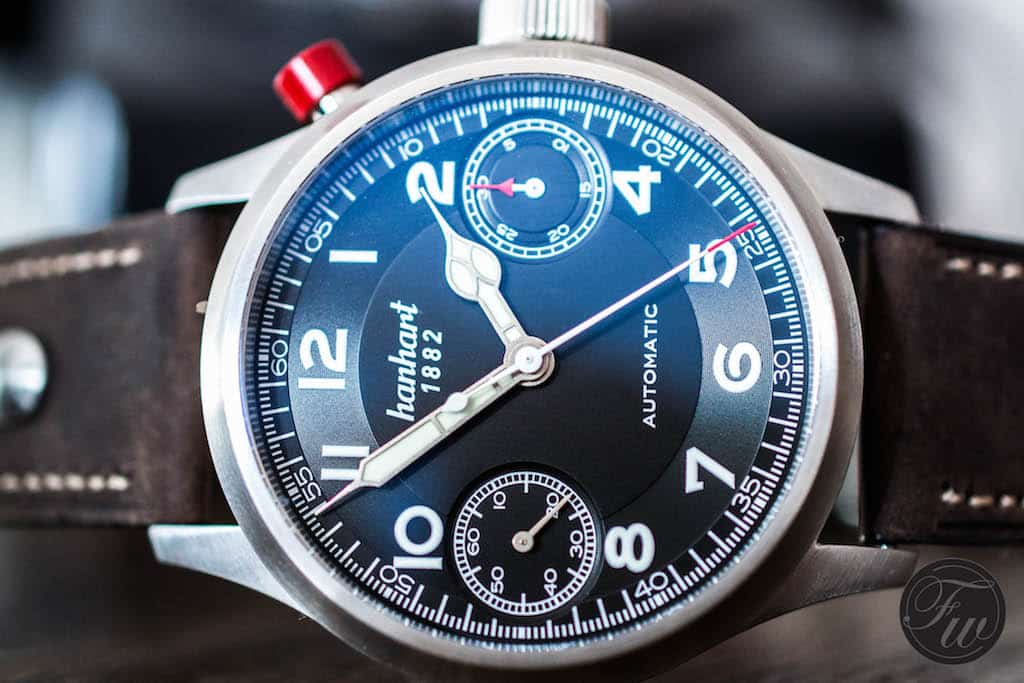 One of my last reviews concerned the Junghans Meister Pilot. I thought it would be exciting to stay on this track, so I asked Hanhart to send me one of their signature models. Enter the Hanhart Pioneer Monoscope. Hanhart produces two versions of this model, with black and with white dial. You can have it on leather strap or bracelet. Also there is an option to choose between flat or fluted bezel (for more vintage feel). 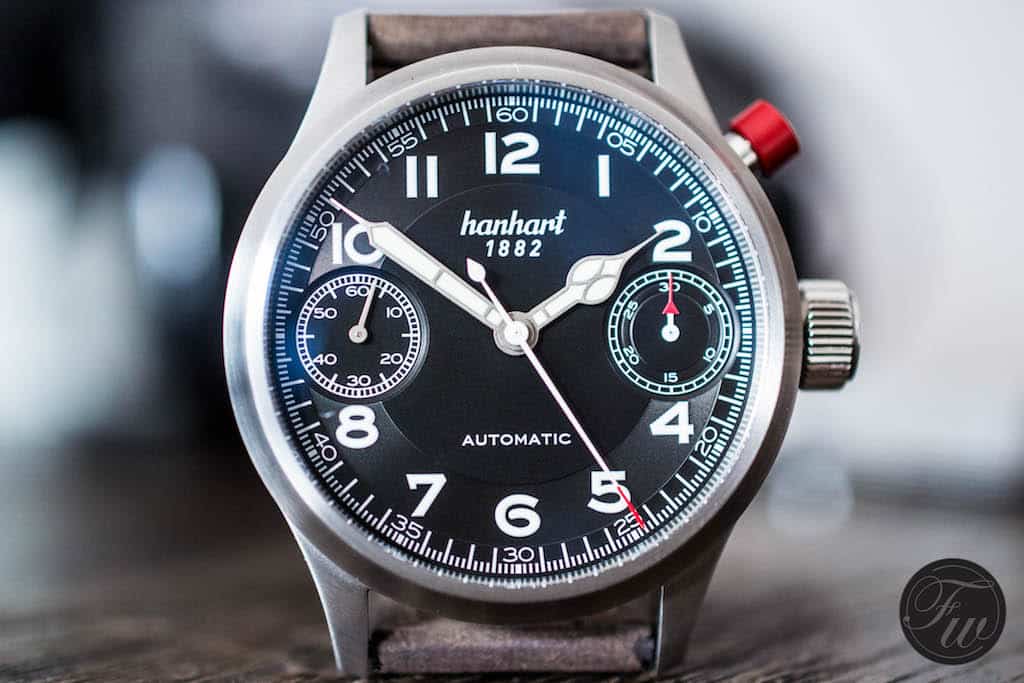 The most obvious feature of the Hanhart Pioneer Monoscope is the single pusher at  2 o’clock. In case you are not familiar with these types of watches, you press the pusher and the chronograph starts running. You have to press it again to stop it and then again to reset it. Simple as that. Hanhart painted the pusher red. This is a signature element of Hanhart chronographs, you can read about its history in the special box below. 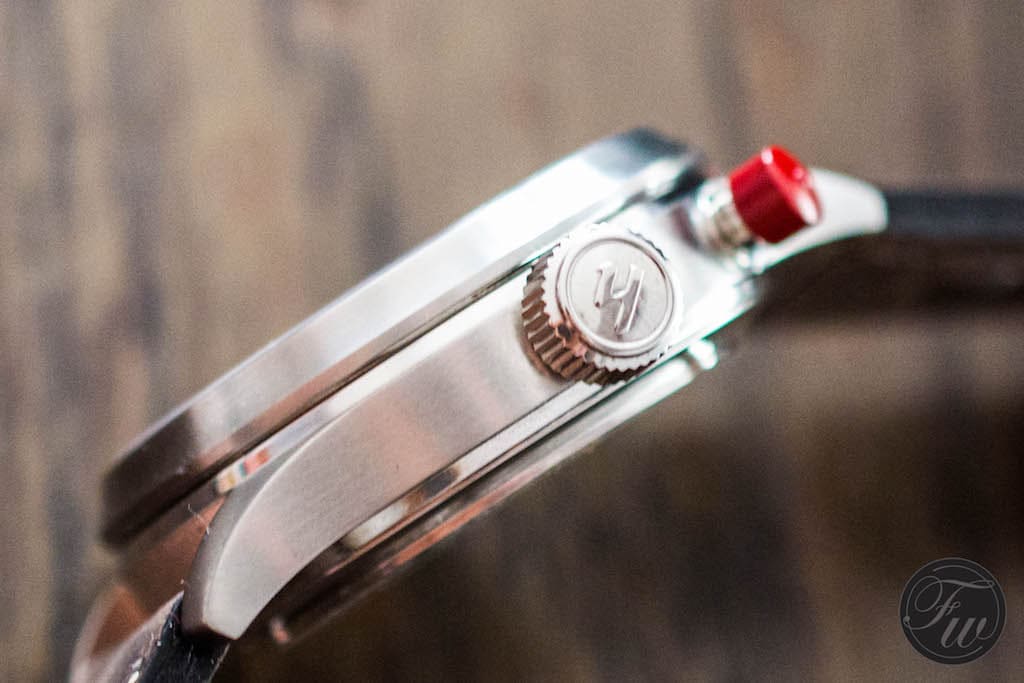 At 45mm, the Hanhart Pioneer Monoscope is considered pretty large. You can find smaller 42mm versions in the Pioneer line, they are the TwinControl and MonoControl. The height of the Hanhart Pioneer Monoscope is 16mm and it is 55mm from lug tip to lug tip. The case is stainless steel, the bezel is flat. The case back is crew-in which allows the watch to be water resistant up to 100m, not that you need it in a pilot’s watch it still is a nice thing to have. 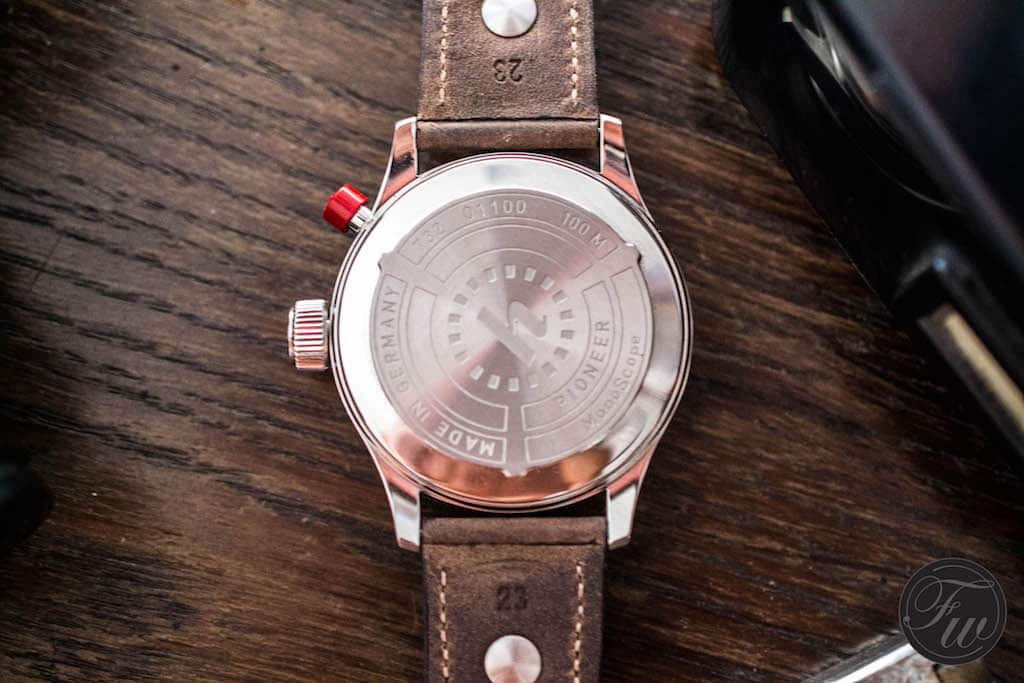 The caseback has the Hanhart “h” in the center, the model name, the reference number and the “Made in Germany” sign. The crown is also pretty large to accompany the size of the case. Crowns were also oversized on the vintage watches so the pilots could turn it even with the gloves on. It is pull-out and has the same “h” you see on the case back.

One if not the most recognizable feature of Hanhart chronographs are the red pushers. As you seen the Hanhart Pioneer Monoscope also has a red pusher. But why are they red? And who painted them? This little story from the manufacturer shed some light on the history.“He placed a kiss lovingly on her brow as she slept before quietly leaving the apartment. As he looked at his Hanhart watch in the hangar, a smile flitted over his lips: she had painted the button with her red nail varnish so that he would think of her always and return safe and sound …

This is the legend behind the red button – the distinctive trademark that has characterized Hanhart since the company first introduced its chronographs in 1938. The button has been painted, in particular to prevent pilots from unintentionally zeroing the stop time.”

I asked for the black dialed version as this is the closest in appearance you get to the original 1940’s model. The dial of the Hanhart Pioneer Monoscope is very plain and simple. The two chronographs sub dials are at 3 and 9 o’clock.  3 being the 30-minute chronograph dial and 9 is the continues second sub dial. The numbers are large and filled with Super-LumiNova just like the hands. Below the 12 you find the brand name “hanhart” and the years of foundation 1882 and at 6 you see “Automatic” referring to the movement of course. 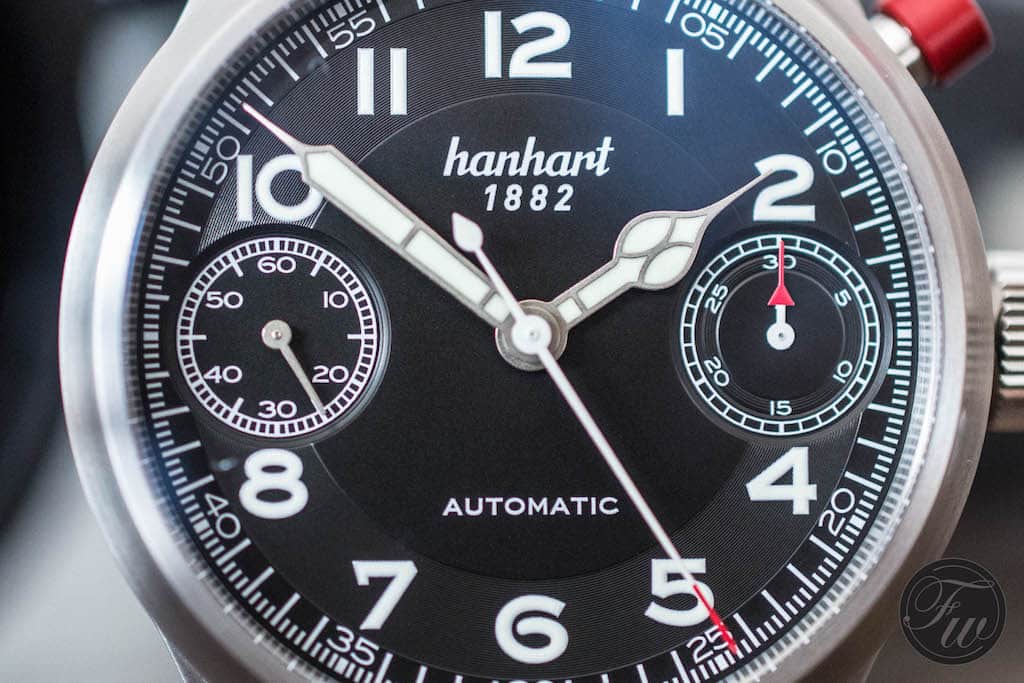 The dial is framed by the 60-second scale of the chronograph. Hanhart used cathedral hands until the late 1940’s when they changed the design to more simple versions. The Hanhart Pioneer Monoscope uses these older cathedral hands. They are beautiful and add the finishing touches to the vintage look of the dial. Really, the only difference you would see is the revised Hanhart logo and the “Automatic” at the bottom. Even the font of the numerals matches the early version’s (see number 6 for example). The bezel of my Hanhart Pioneer Monoscope is flat like the real early Hanhart’s from 1938. However most (if not all) of the 1940’s watches had a fluted bezel. The crystal is convex sapphire glass with anti-reflective coating on both sides.

So let’s talk about the movement inside the Hanhart Pioneer Monoscope. The caliber inside the watch is the HAN4212, an automatic, bi-compax movement. This is a derivative of an ETA (Valjoux) 7750, modified to be a single pusher. 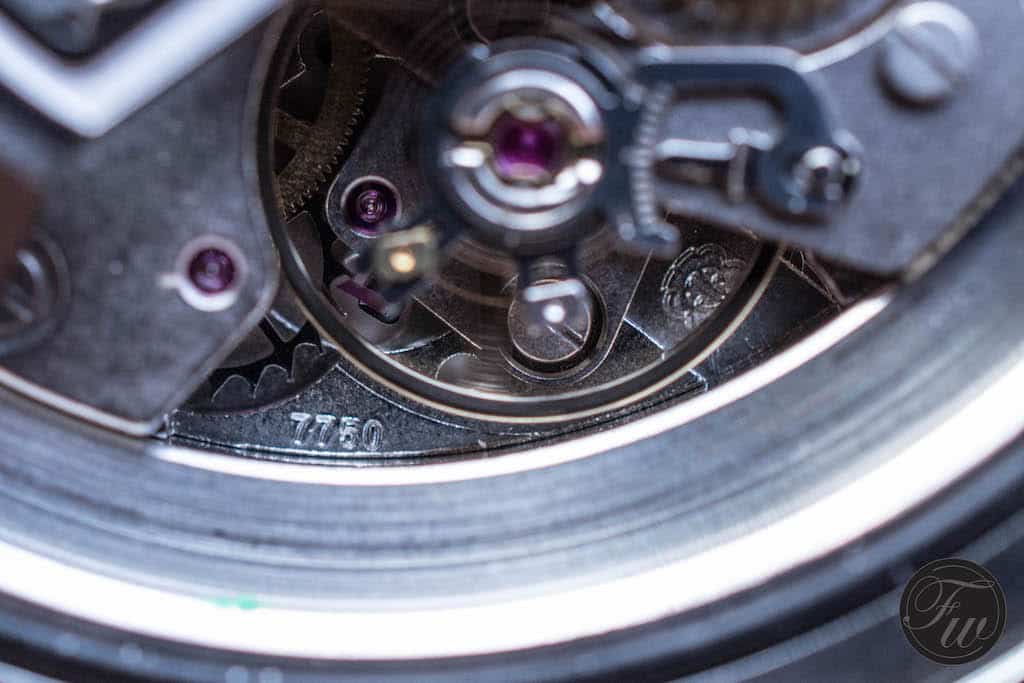 The other model in Pioneer line, the Pioneer TwinDicator is a very similar version with 2 pushers though. It is a 31-Jewel caliber with 28,800 VPH (vibration per hour) and 4 Hz. Though it is not visible through the caseback, the movement has a skeleton rotor with the Hanhart logo in the middle. The HAN4212 has a power reserve of approximately 42-44 hours. If you take the watch of your wrist and hold it in your palm, due to the size and the mono-pusher design it can serve as a stop watch. An accurate and very sturdy movement that served me well while I had the watch with me. 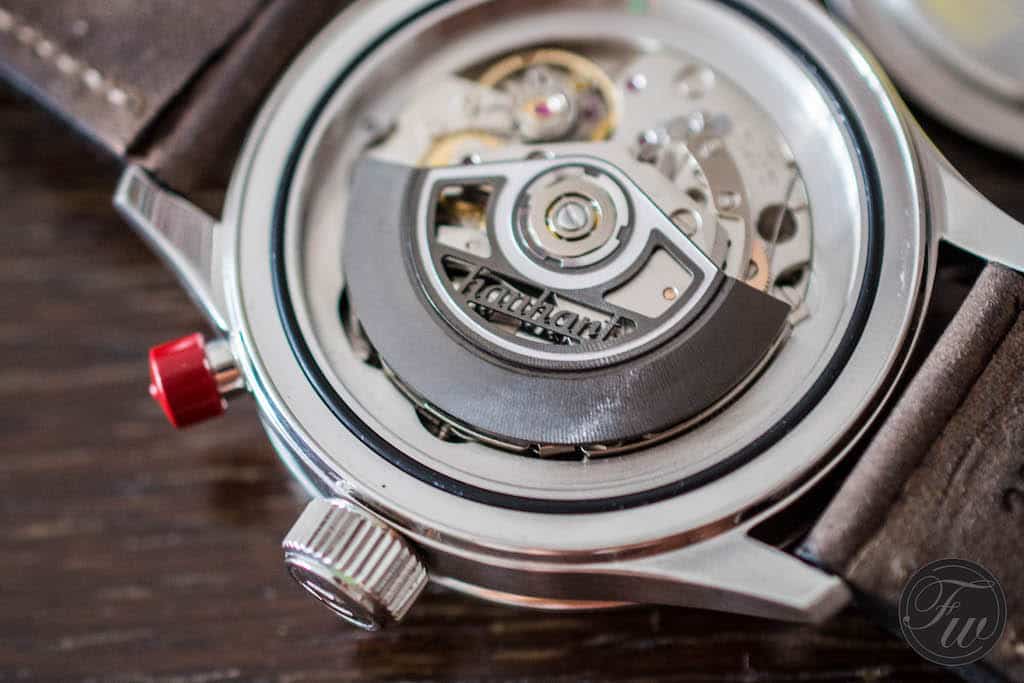 One of the characteristics of a military watch from that time on many models are the fixed spring bars. This means that the spring bars that attach the strap to the watch were not removable but welded together with the lugs. This served as a security to eliminate the number of things that could go wrong (i.e.: break) during a mission.

Because the springs could not be removed the straps needed to be either a NATO type (only came later in time) or fold-over straps with rivets to close the end. The strap would be longer and the pilots would have to push them through the space between the spring bar and the case. Then they would fold it over and secure it with a rivet, that went through the leather strap. This is the reason many flieger inspired watches have rivets on their straps. 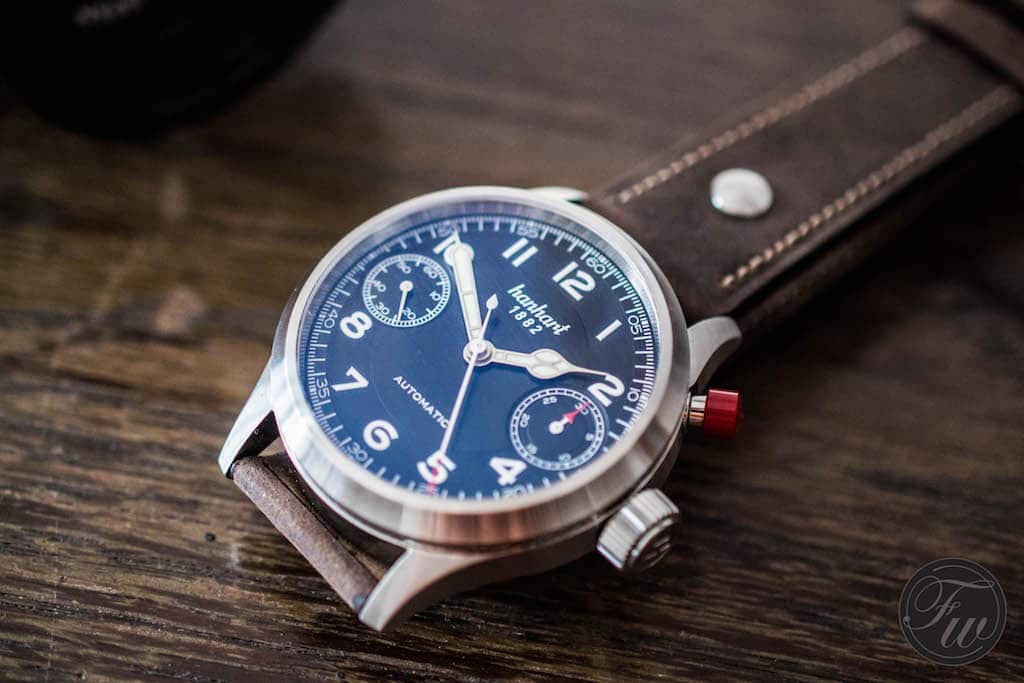 The Hanhart Pioneer Monoscope came on a strap like that to me. Of course nowadays this is only a design element. Combined with the brown suede leather the strap is made of, it delivers this true flieger watch look Hanhart was aiming for. The strap is a bit odd-measured 23mm calfskin with a signed buckle. Hanhart offers the strap in black as well as a steel bracelet. One thing I should mention is that I have a relatively large wrist at 7.5” and I use the closest hole on the strap. So only buy this if you have a fairly large wrist otherwise the strap would be too big for you. 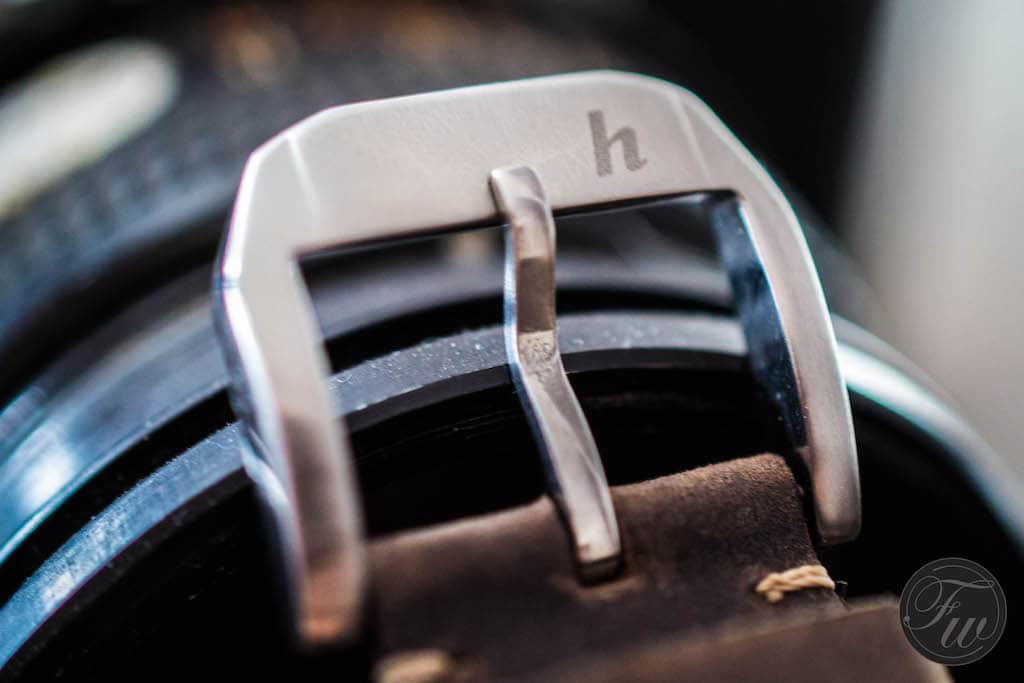 Anybody who loves the watch but thinks it’s kind of big should consider the smaller 42mm versions. If you love big watches then the Hanhart Pioneer Monoscope might just be a fit for you. The watch wears really well, the size and the weight is balanced nicely. It does not feel too heavy or bulky on the wrist. Aesthetically a true heritage chronograph from the golden age of Hanhart. The price of the model I review is €2850, you have to pay €200 more for the version on the bracelet. 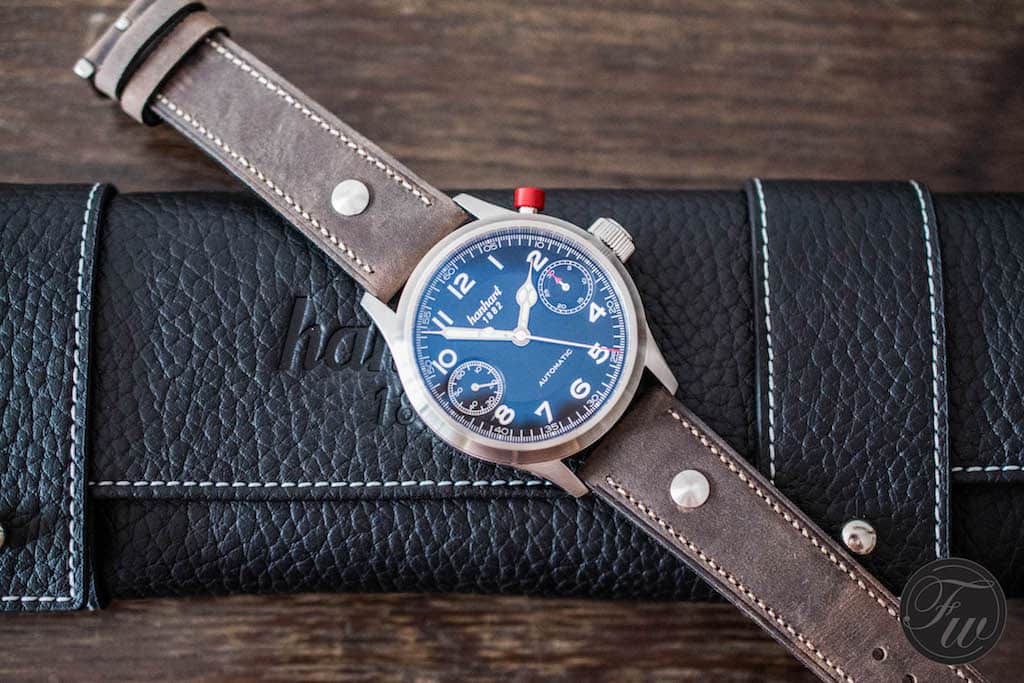 It comes in a nice leather watch sleeve with the warranty card and manual booklet and a polishing cloth. You can buy the watch through Hanhart’s online shop. One of the coolest movie starts of all time, Steve McQueen also wore a Hanhart, among his iconic watches. I guess he knew what he was doing, so if you don’t trust my judgement, trust his. The Hanhart Pioneer Monoscope is a cool watch with a fair price and an evergreen design.