American watchmaking, watch culture, and watch market were in the spotlight during the Dubai Watch Week Horology Forum 8 “Moves New York”. The watch event, which took place last weekend in NYC’s Meatpacking District, was comprised of panels, debates, and watchmaking and watch-photography masterclasses. And yes, while discussing the present state and future perspective of American watchmaking, the spirit was definitely along the lines of “MAWGA”. Hollywood actor and self-taught horologist Aldis Hodge proved to be the most ambitious. With his brand A. Hodge Atelier, he’s aiming for Haute Horlogerie status. And to keep things firmly rooted in present-day relevance, there was an insightful talk about the role of NFTs in the watch world. I also had plenty of coffee, as you can see in the photos. I had to in order to stay sharp and fight off the jet lag.

Still, the members of the Dubai Watch Week Horology Forum 8 “Made in America” panel proved to be hopeful about a revival of American watchmaking. The panel, led by Cara Barrett (formerly of Hodinkee and founder of Parchie, a direct-to-consumer watch brand for kids), consisted of actor and horologist Aldis Hodge, vintage-watch specialist Eric Wind, and Shinola’s VP of Product Design, Brandon Little. The panel members saw the possibility of reviving watchmaking as a local industry, but they agreed that bringing back American watchmaking’s heyday of the 1800s and early 1900s is a ginormous task. It will take huge investments in people and machines, for instance, and perhaps several generations to rise to a level that is on par with the dominant Swiss manufacturers. 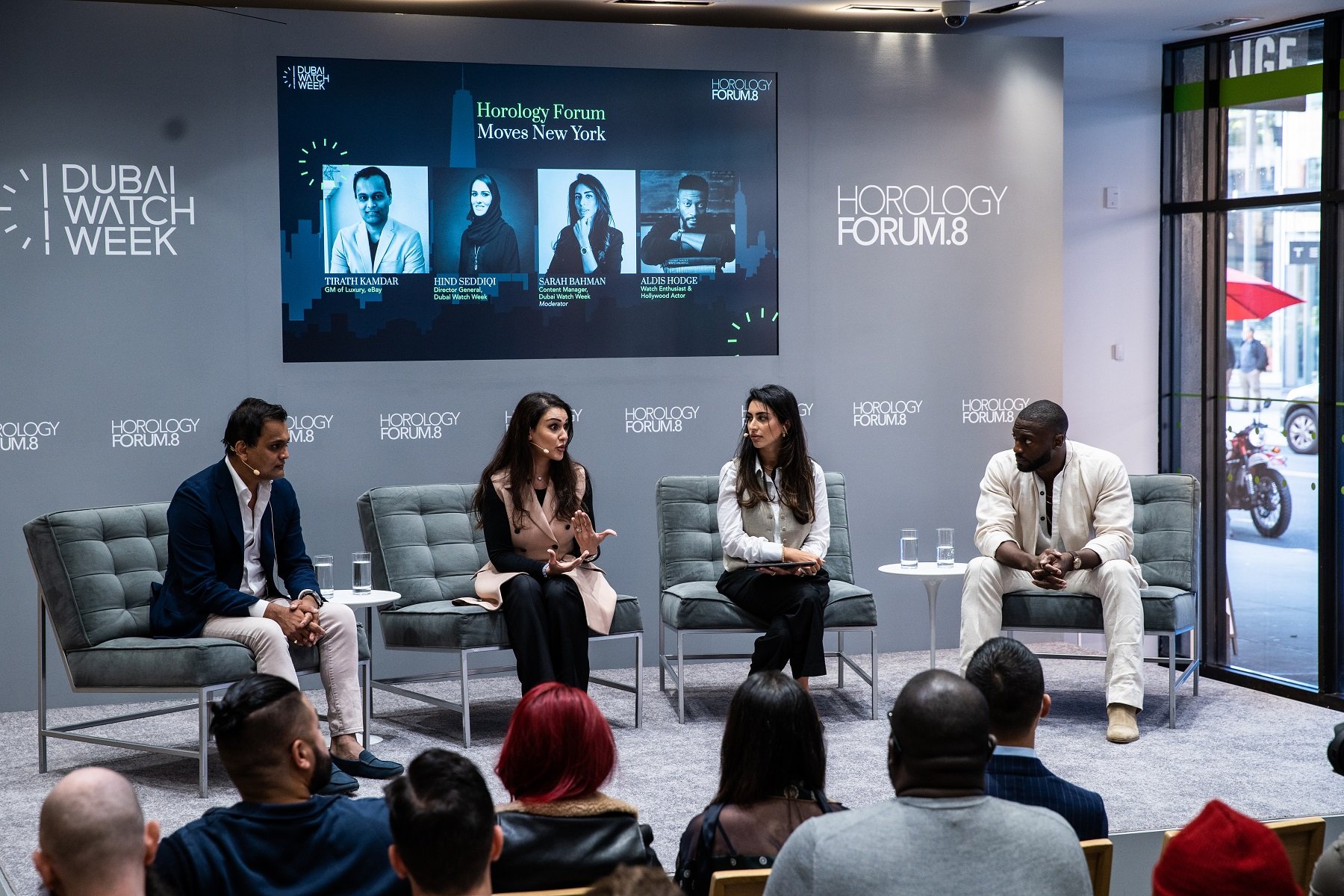 But there was no shortage of ambition on the panel. Brandon Little of Shinola explained how the Detroit-based manufacturer achieved a lot in just over a decade. Not only is Shinola the only watch-manufacturing facility in the country producing at scale, but it also aspires to be a player in higher, more premium price segments. Aldis Hodge aims for an even more exclusive audience with timepieces that yet have to come out. The 36-year-old actor, who has been relentlessly studying watchmaking since the age of 19, has his sights set on the world of Haute Horlogerie. And he means business. Hodge’s goal is to build his watch brand A. Hodge Atelier to a level at which he can pass it down as a legacy. And to do so, he has to build outstanding, refined timepieces. The fact that he owns a guilloché machine is solid proof of his determination to do just that. 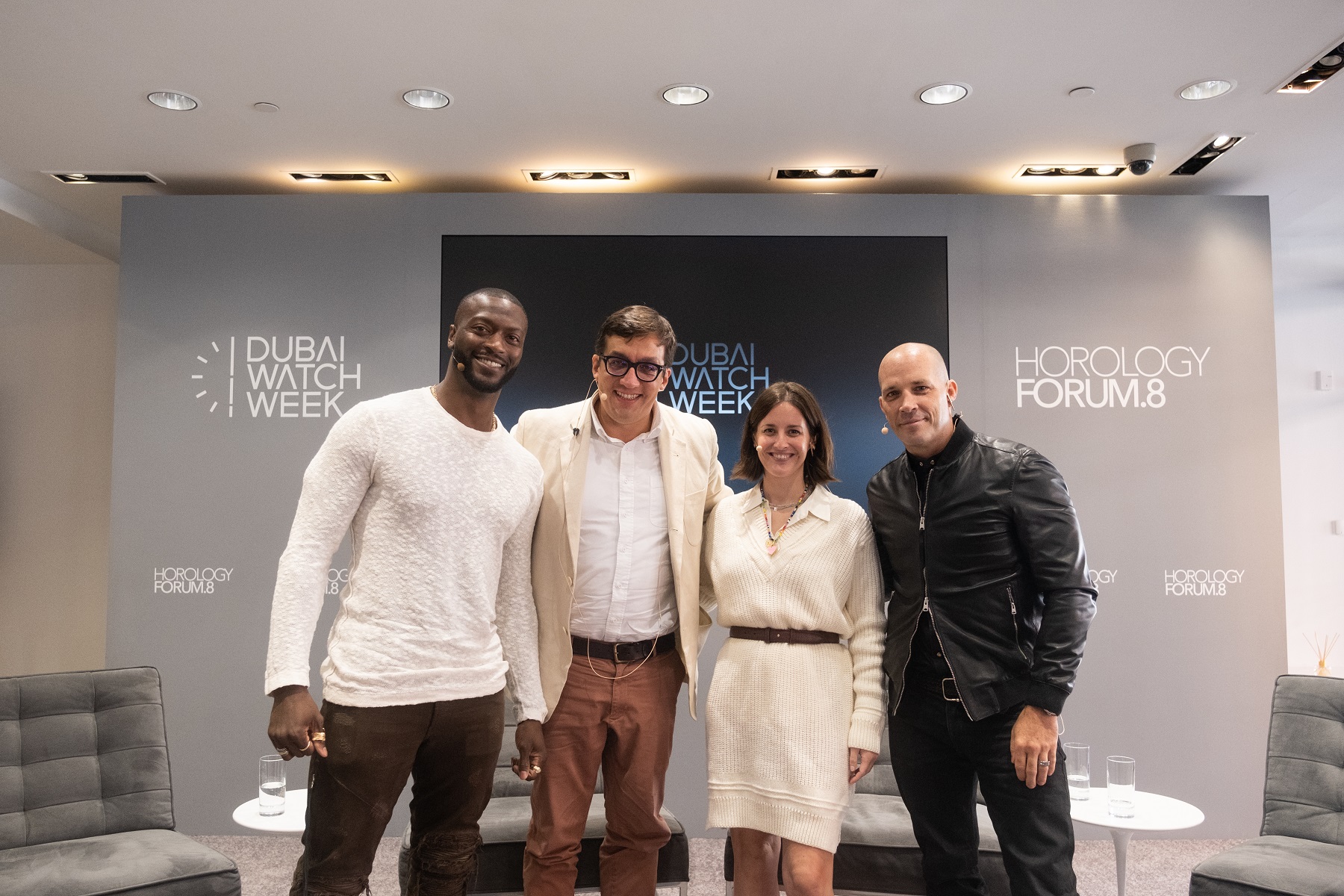 An A. Hodge Atelier prototype in the movies

Hodge was wearing a very interesting watch of his own making during the event. It was an A. Hodge Atelier prototype that I was not allowed to take a picture of. But the actor did tell me to pay close attention to his wrist in the upcoming superhero movie Black Adam. Although only very briefly, the watch will be visible to a large audience. Hodge designed the movement with a peripheral rotor and non-standard time indication himself in the USA. Manufacturing stateside, however, was impossible, so he went to Switzerland for that, “an, at times, most frustrating and time-consuming affair for a small player like me who has to wait in line,” Hodge explained.

Hodge’s hope for the (distant) future, however, remains strong. He believes he can surround himself with enough expertise in the shape of people, machines, and tools to create watches that are not solely dependent on Swiss suppliers. And in doing so, he not only wants to reach the level of Greubel Forsey and George Daniels — his sources of inspiration and motivation — but he also wants to help marginalized communities. On the verge of realizing his 17-year-long watch dream, he’s also sure he will find a clientele for his creations. The success of small U.S. watchmakers like J.N. Shapiro, which specializes in watches with engine-turned dials, and Pennsylvania-based RGM Watch Co. shows that high-end American watchmaking can thrive. 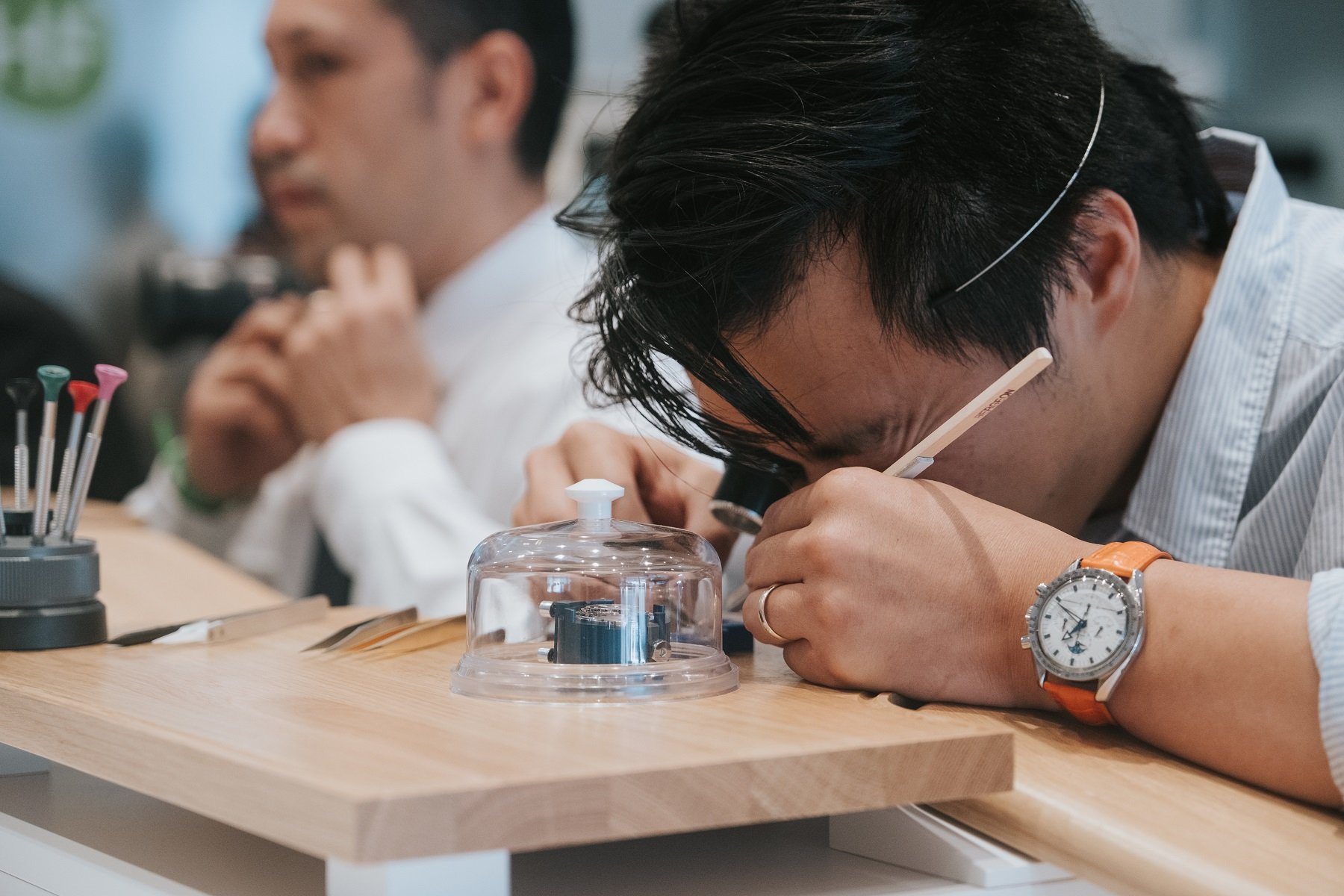 Brandon Little made a good point. He stated that in order to build up a watchmaking culture, the perspective on what people want their children to become must change. In other words, we must value people who work with their hands. We must appreciate those who create something tangible and express that both through respect and healthy paychecks. Little pointed out that the people working at Shinola take great pride in their work, and they’re not afraid to show it.

The big questions, however, were these: do the American people want to wear “Made in America” watches in the way they want to drive their Ford F150s? Additionally, will the rest of the world welcome, appreciate, and buy American-made watches because the “Made in America” stamp adds value? The panel members were in agreement and answered both questions with a firm “yes”. But what do you, both American and non-American readers of Fratello think about the matter? How realistic is the “MAWGA” idea? 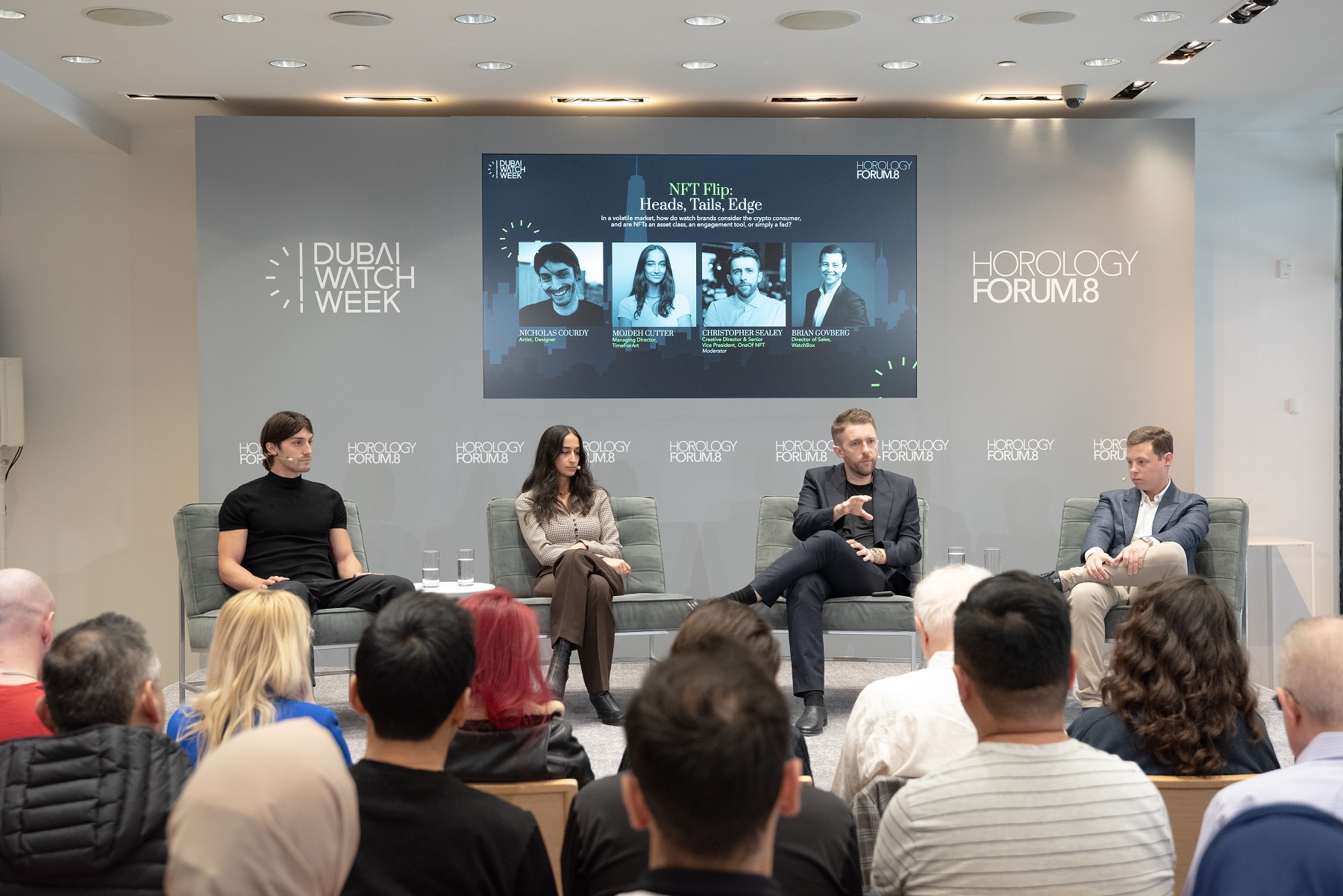 A collectible, but not as we know it

It was up to Christopher Sealey, the Senior Vice President and Creative Director of OneOf — a sustainable NFT platform for music, sports, and lifestyle that’s designed to make digital collectibles accessible to all — to explain what NFTs (non-fungible tokens) are. Not exactly an easy task when talking to a room full of watch aficionados with a soft spot for archaic, analog objects. But Sealey delivered and explained that NFTs can be seen as modern-day collectibles which are bought and sold online. And an NFT is digital proof of ownership of any given item — a watch, for instance. Still a bit too abstract? The most tangible explanation is that every NFT, a unit of digital data, exists and is recorded on a blockchain. This guarantees that the asset is unique. 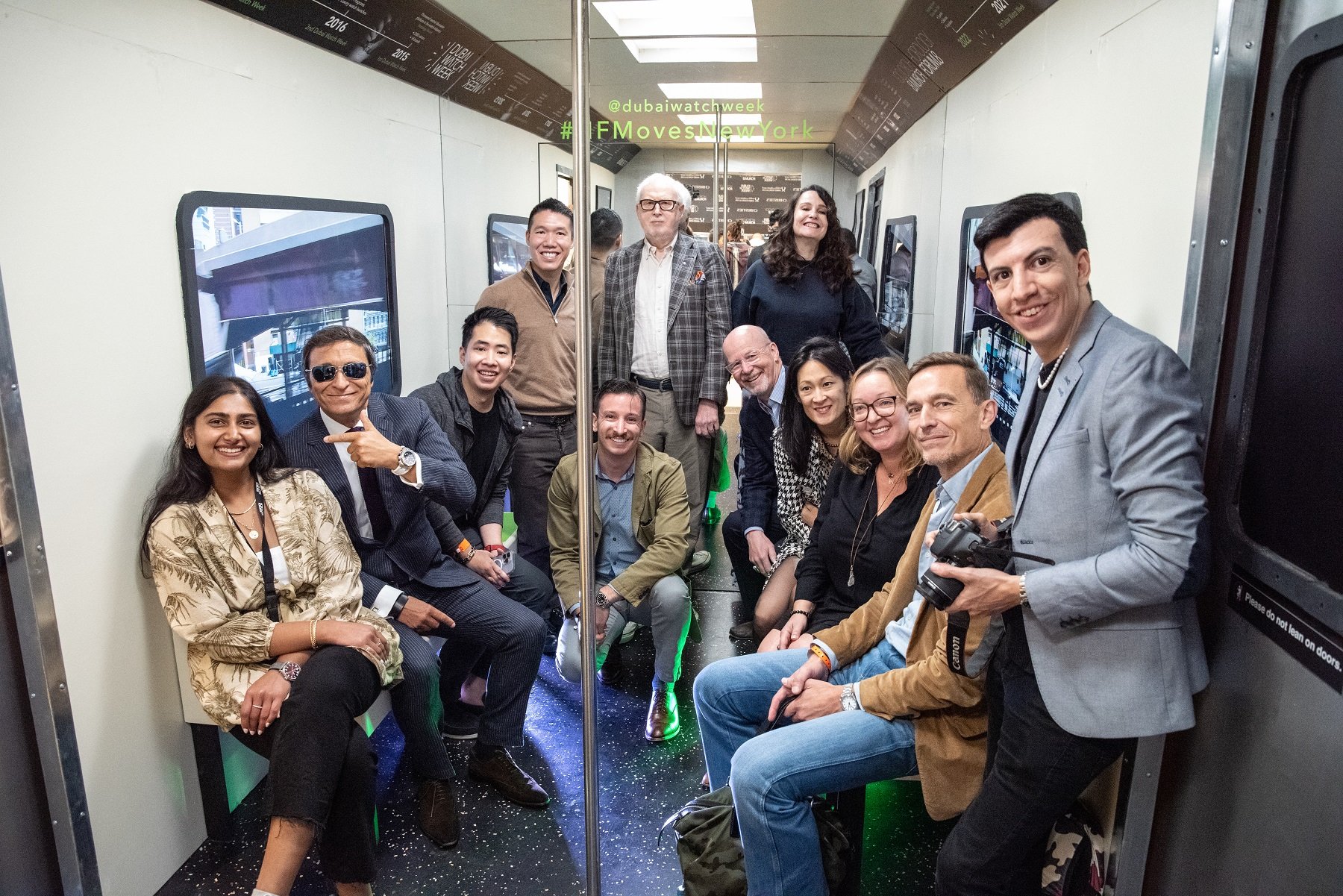 Go on, treat your avatar

Since a watch is a tangible object, the thought of having a timepiece as an NFT can be quite perplexing. A watch in the shape of an NFT is a fairly new phenomenon. Virtual art and fashion preceded the first NFT watch that was developed by Swiss cybersecurity company WiseKey in March 2021. But why would you want to spend money on a purely digital watch that you will never feel on your wrist?

“Because your avatar can wear it in the metaverse” is the short answer. People’s digital presence is rapidly becoming more important. If you’re a basketball player in the digital space, you want your avatar to wear just the right shoes. You could have your dunking avatar wear a pair of very special kicks — Michael Jordan’s game-winning Jordan 1s if you have the money, for instance. And off the court, that same avatar could continue to be a baller wearing the right one-of-a-kind watch.

To put it bluntly, an NFT watch is a digital substitute for the real deal. But because it’s a unique object in the metaverse, it also comes with bragging rights. And that’s not that different from the real world, now, is it? But are bragging rights enough to guarantee that watch NFTs will be a success? Well, there’s more to it when it comes to NFTs and watches. As Brian Govberg, Director of Sales at WatchBox explained during the panel talk, innovative brands could use NFTs for storytelling experiences, for instance. NFTs could also be used to unlock privileges for VIP users or to act as tickets for exclusive events. 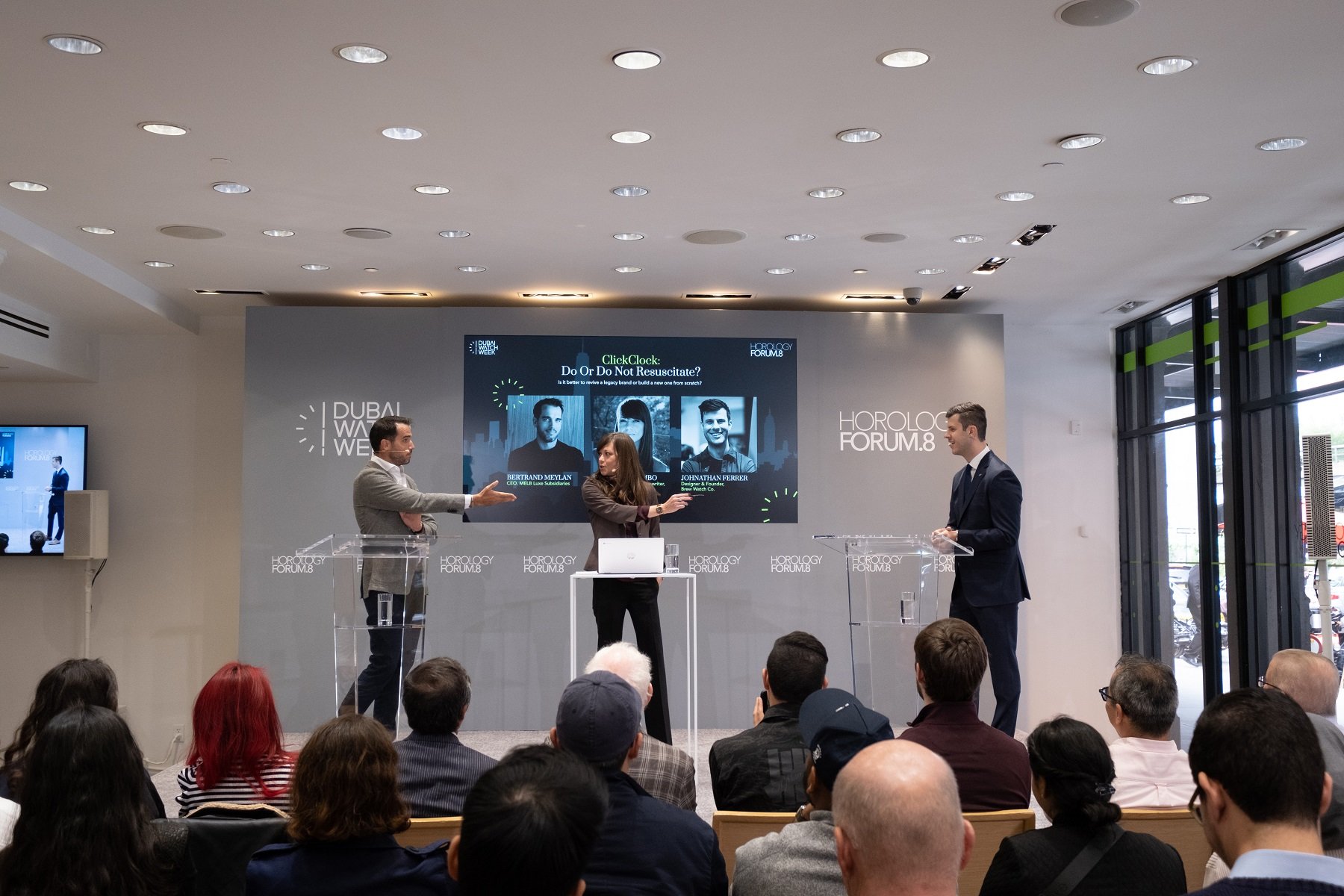 What are your thoughts after reading this (unexpected, unscheduled, and one-off) edition of Thursday Morning Coffee Watch Talk? Do you need virtual bragging rights? Do you need to rock a unique timepiece in the metaverse? What are your thoughts on watches and NFTs? Please let me know in the comment section. And for those who wanted to travel to NYC to attend the event and meet up with fellow watch enthusiasts, the panel and debate videos will be available on the Dubai Watch Week website from October.