Just two days after we said on our podcast that Seiko will probably have some more releases planned for this year’s 55th anniversary, we’ve been treated to two more limited edition Prospex watches. Meet the Seiko Prospex SLA043J1 and the SPB183J1. 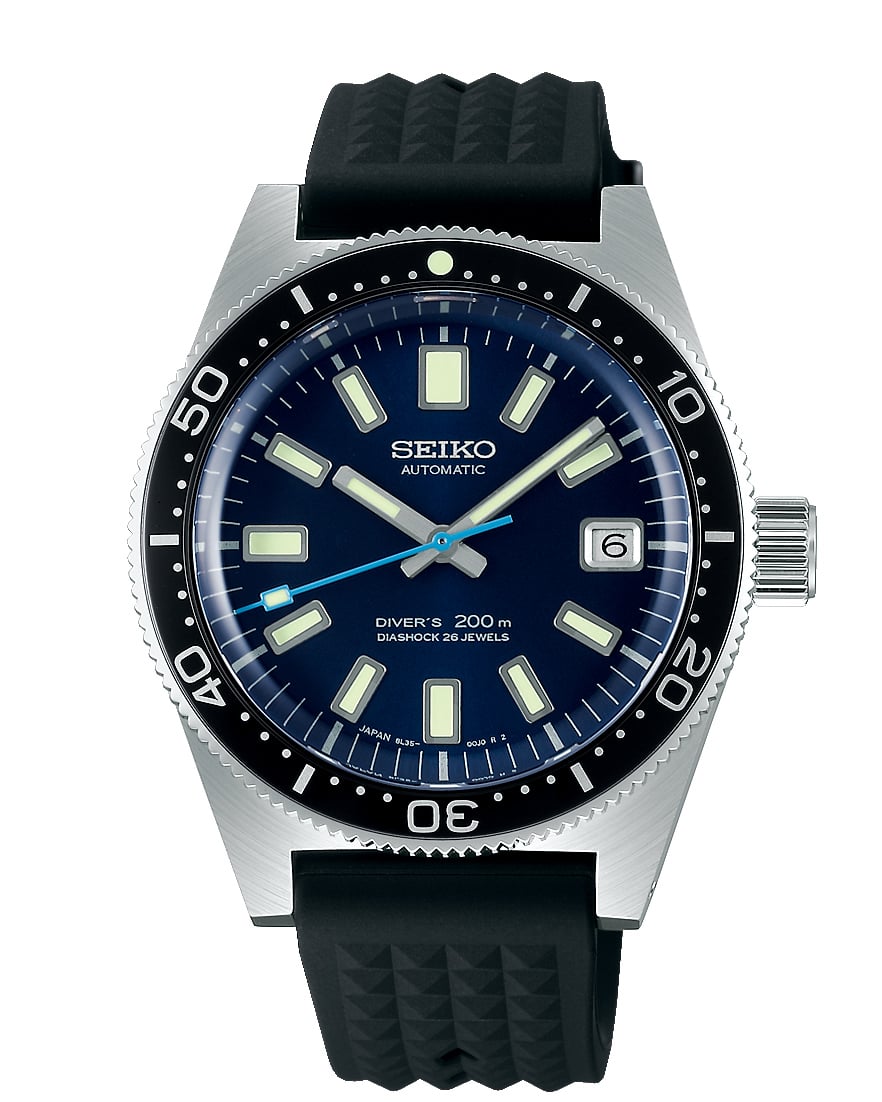 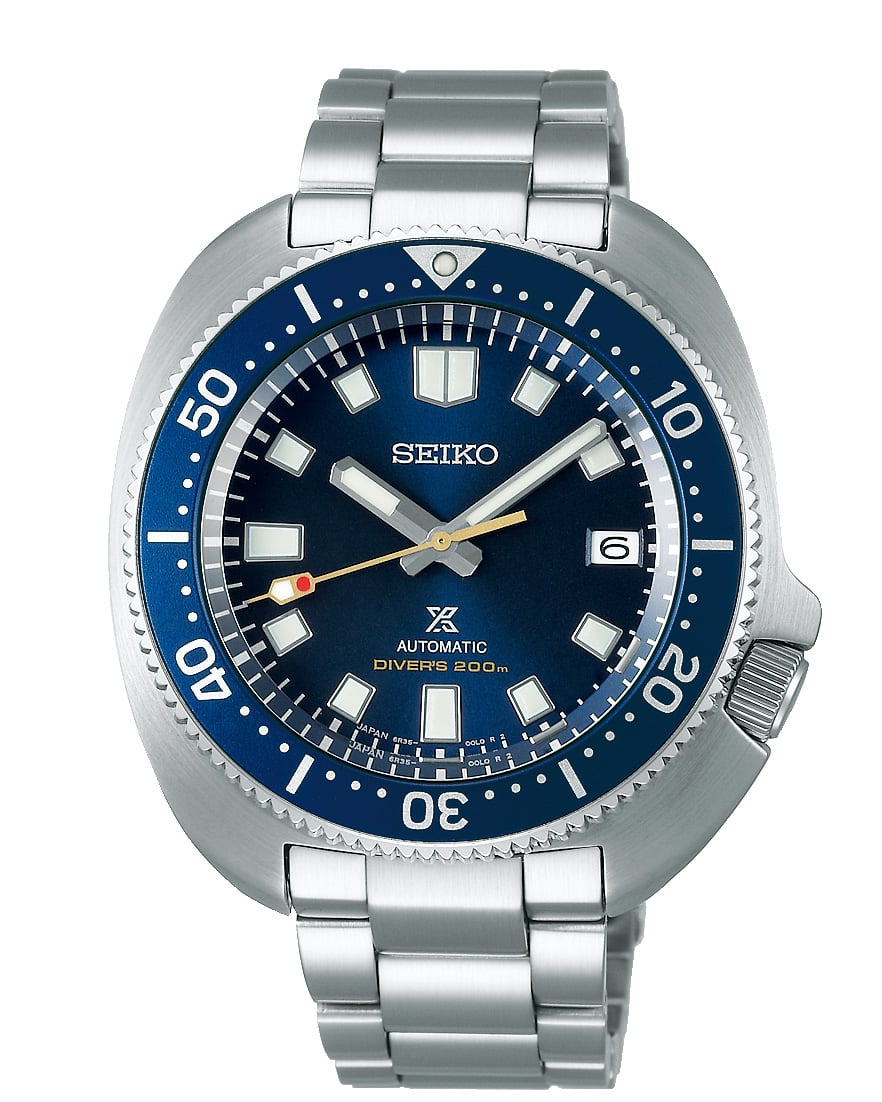 Let me start with the one I find most interesting, the Seiko SLA043J1. In short, the original watch (62MAS) was introduced in 1965 by Seiko and MAS stands for “autoMAtic Selfdater”. This watch has a water resistance of 150 meters — the first Seiko that could handle over 50 meters/5ATM of pressure (by specifications). This 37mm stainless steel case was fitted with the Seiko caliber 6217 movement. Back in 2017, Seiko introduced a great reproduction of the 62MAS, the SLA017. The Seiko SLA043J1 is very similar but has a few differences. What remains the same is the more modern diameter of 39.9mm. The Seiko SLA043J1 has a thickness of 14.1mm. 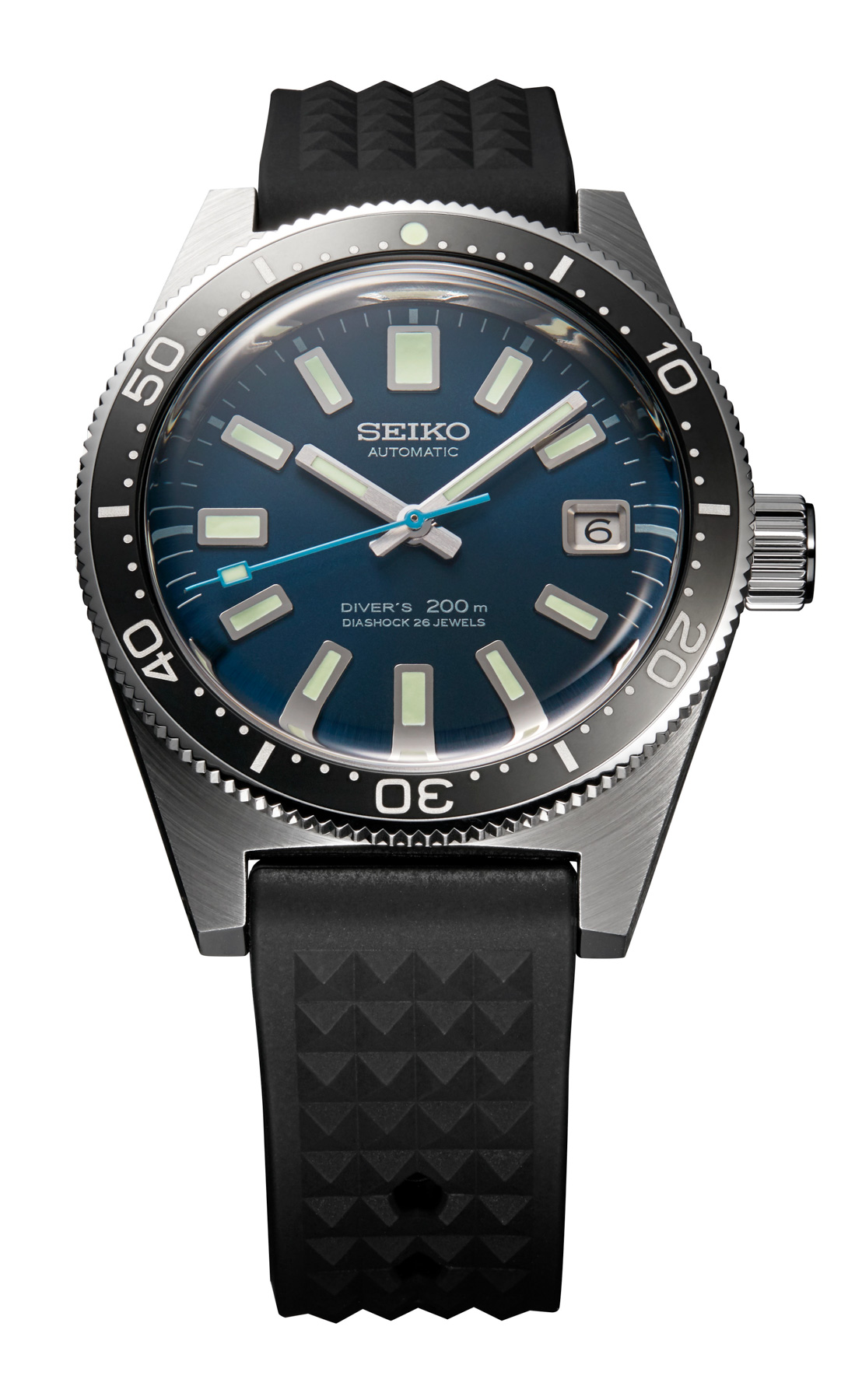 Special features of the SLA043J1

One of the most important differences is the use of Seiko’s “Ever-Brilliant Steel”. It is called this, because of the brilliant white hue that gives this watch its unique look. Also, this grade of steel is more corrosion resistant than common steel types used for watches. Besides that, it is the dial color that is different. The Seiko SLA043J1 uses a beautiful blue for its dial and has a light blue second hand. The SLA0431J1 comes in a special box with an additional blue silicon strap. Inside, there’s the famous Seiko 8L35 self-winding movement that provides 50 hours of power reserve. 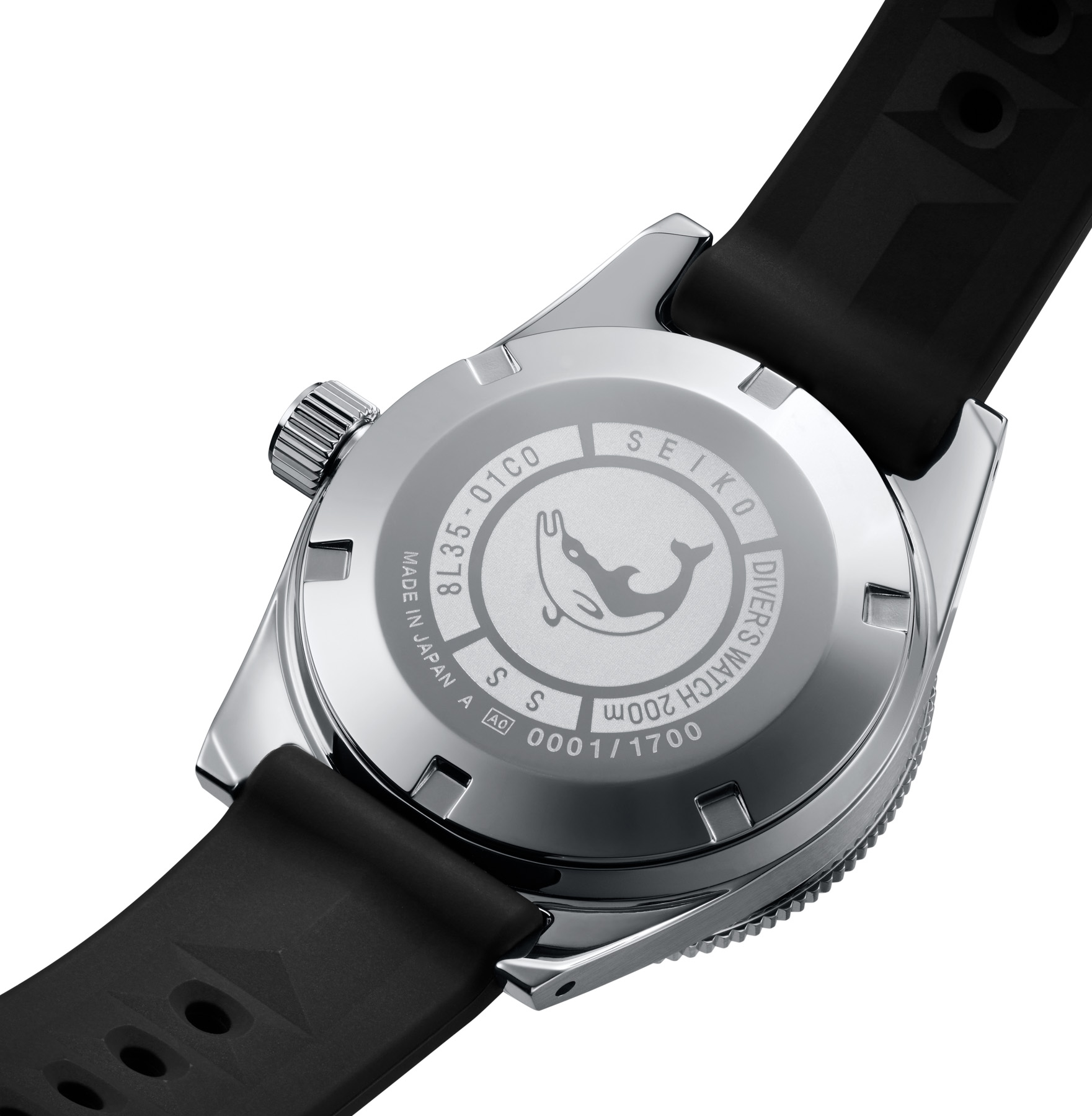 The water-resistance of this watch is 200 meters, a bit more than the original 62MAS. It has a sapphire crystal, screw-down crown, threaded case back, and, as mentioned, a silicon strap. The Seiko Prospex SLA043J1 will be available starting November 2020 and the retail price is €4,800. Importantly, this watch is limited to 1,700 pieces.

The other Seiko Diver 55th Anniversary watch is the SPB183J1. The original is the Seiko reference 6105-8110, also known as “Captain Willard”. Loved by many collectors and enthusiasts, it was also used by the Japanese adventurer Naomi Uemura (1941) who wore it during his eighteen months (1974–1976) solo dog-sled run from Greenland to Alaska — a journey of 12,000 kilometers. Also, in 1970, he was the first Japanese citizen to climb Mount Everest. The new Seiko SPB183J1 is another interpretation of the watch that Uemura wore during his adventure. This time, it has a blue dial, blue bezel, and a yellow seconds hand. A handsome combination! 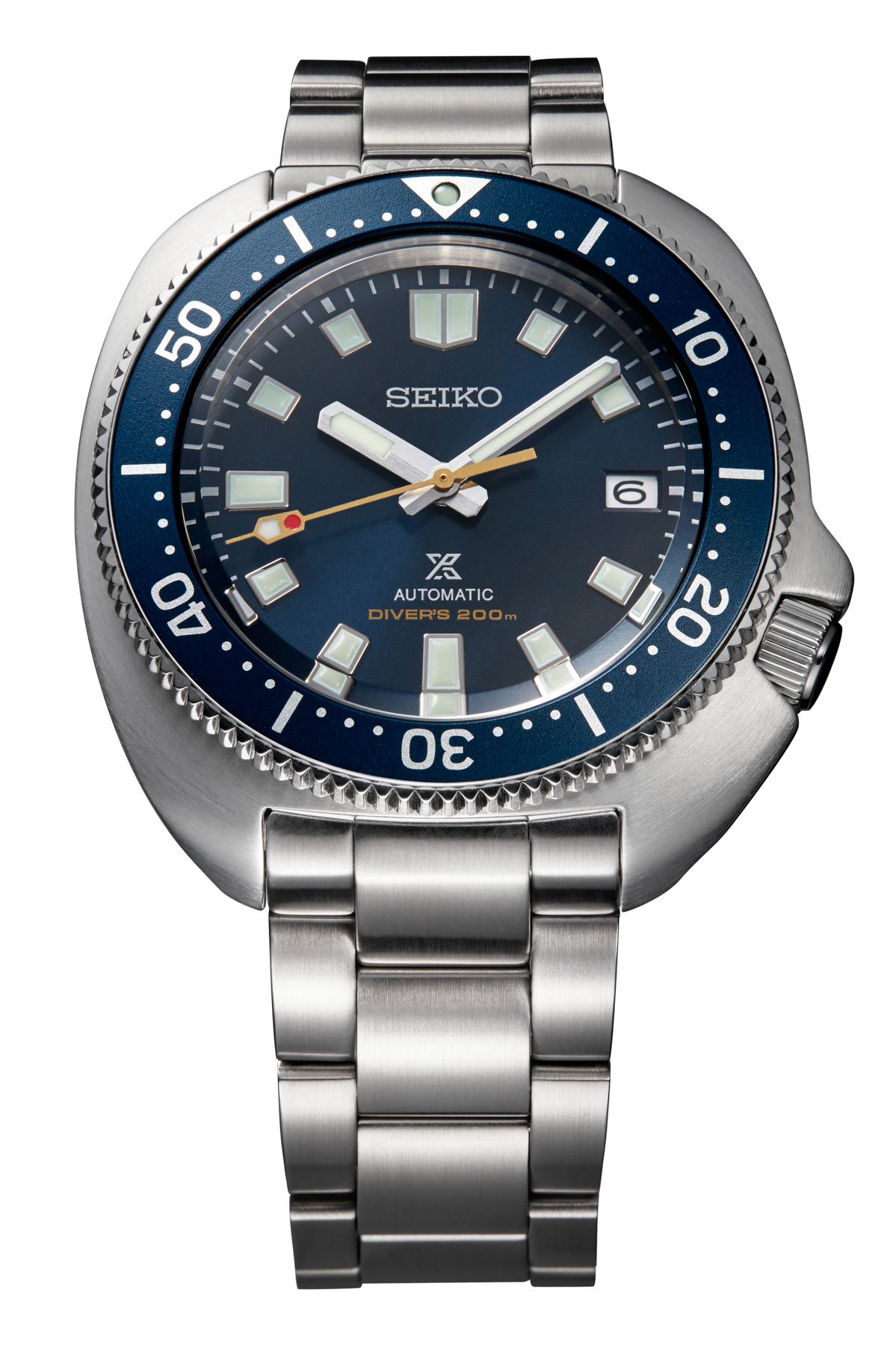 The Seiko SPB183J1 has a 42.7mm diameter case with a thickness of 13.2mm. The lug-to-lug measures 46.6mm. It comes on a stainless steel bracelet with a security clasp and dive extension, but also with a blue silicon strap. Inside, there’s Seiko’s 6R35 movement. One of the brand’s most often-used movements it seems, for watches in this price range. 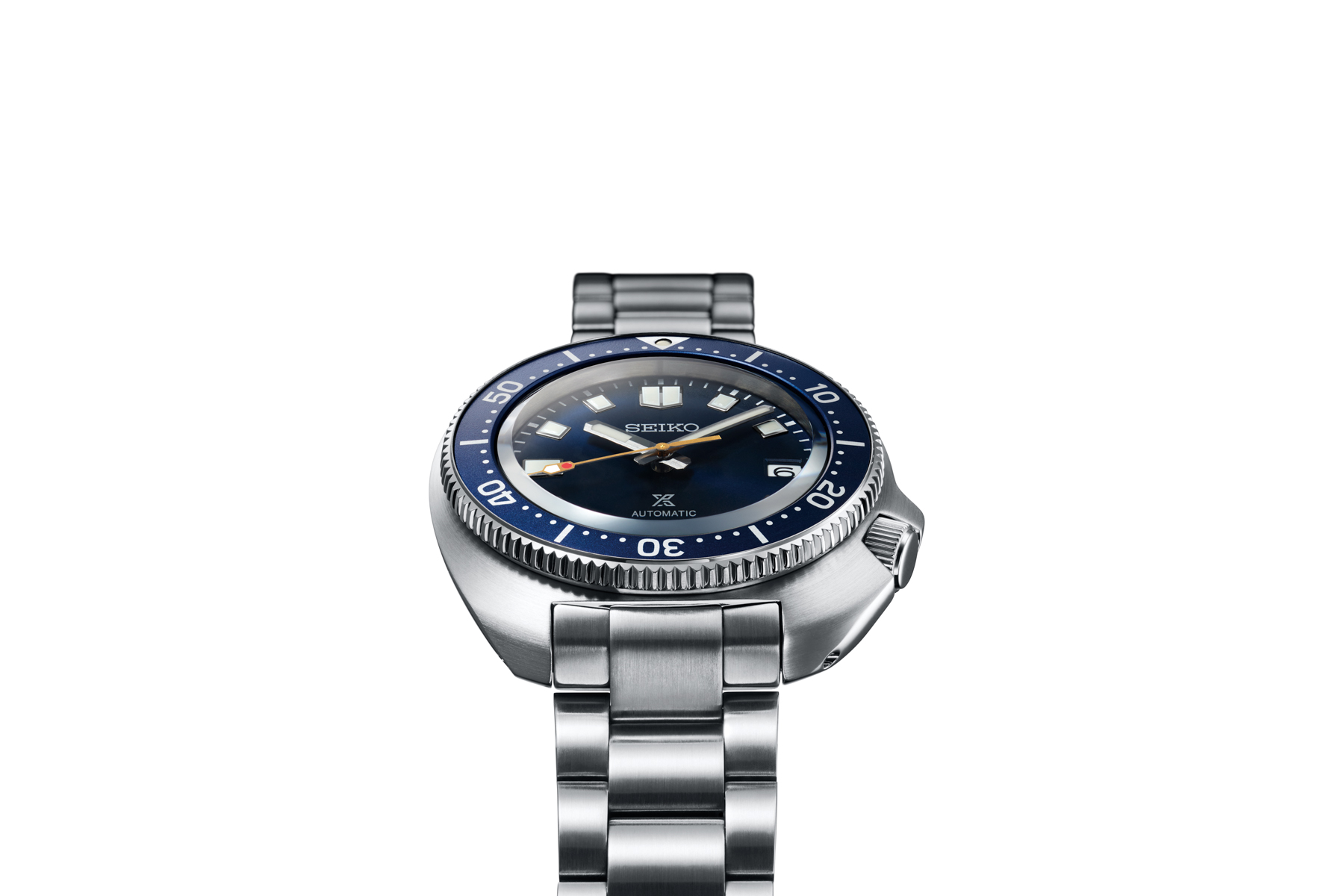 My initial feeling is that, out of these two new models, I love the Seiko SLA043J1 the most. I know how special the “Captain Willard” is, but the case shape makes it something I wouldn’t wear on a daily basis somehow. The original 6105-8110 are pretty popular, and prices seem to be all over the place. The €1,450 seems to be spot on for an inspired watch with modern specifications.

The Seiko SLA043J1 is something different, of course. It leans a bit more towards the high-spec Grand Seikos and former Marinemasters, with its 8L35 movement. Seiko upped their pricing game a bit, which to some is a bit of shock, while others feel it is justified. Compared to what’s out there from other brands, the prices do not seem off the chart to me.

But when you’re used to the old prices or are not familiar with Seiko’s more high-end watches, it might feel steep. That’s why we are looking forward to going hands-on with these new Seiko Prospex watches for the 55th anniversary of the Seiko Diver. In the end, it is about experiencing the watch and its quality in hand. More information via Seiko online.

Hot Topics
Introducing: The Omega Speedmaster Super Racing With Spirate System
162 comments
Design Vs. Specs — Which Is More Important To You When Buying A Watch?
86 comments
The Time To Buy Is Now: How The Current Economic Climate Influences Watch Buying And How You Should React
51 comments
My Predictions For New Omega Speedmasters In 2023
48 comments
A Regret-Free Guide To Buying Your First Luxury Watch — Part Three: Higher-End Options From Omega, Rolex, Grand Seiko, And More
48 comments
Popular
(From The Archives) Shut Up & Read The Truth About Cartier Watches
George Cramer
21
New Hamilton Intra-Matic Auto Chrono – An Introduction (with live pictures)
Balazs Ferenczi
13
Hands-On With the Seiko Prospex SRPC91K1 – Save The Ocean
Robert-Jan Broer
15