Introducing the TAG Heuer Monaco 1989–1999 Limited Edition, the third watch in a series of five to celebrate the model’s 50th anniversary.

The TAG Heuer Monaco 1989–1999 Limited Edition is here and closely follows the first “green” piece released at the Monaco Grand Prix attributed to the 1970’s and the second “red” piece shown at Le Mans, which was dedicated to the 1980’s.  This time, TAG chose New York City as its place of introduction right before the Formula E race to be held on the city streets.

The TAG Heuer Monaco 1989–1999 Limited Edition is once again limited to 169 pieces and brings in yet another set of colors meant to evoke thoughts of the 90’s.  TAG likens the watch’s blasted Rhodium-plated dial to the steely street-inspired looks that were often seen during this decade.  Hmm, I played tennis in my Nike “Bo Jackson” cross-trainers, but the courts were “hard”.  But no matter what TAG’s PR information says, I’d call this limited piece the best looking of the three we’ve seen thus far.  Why is that? 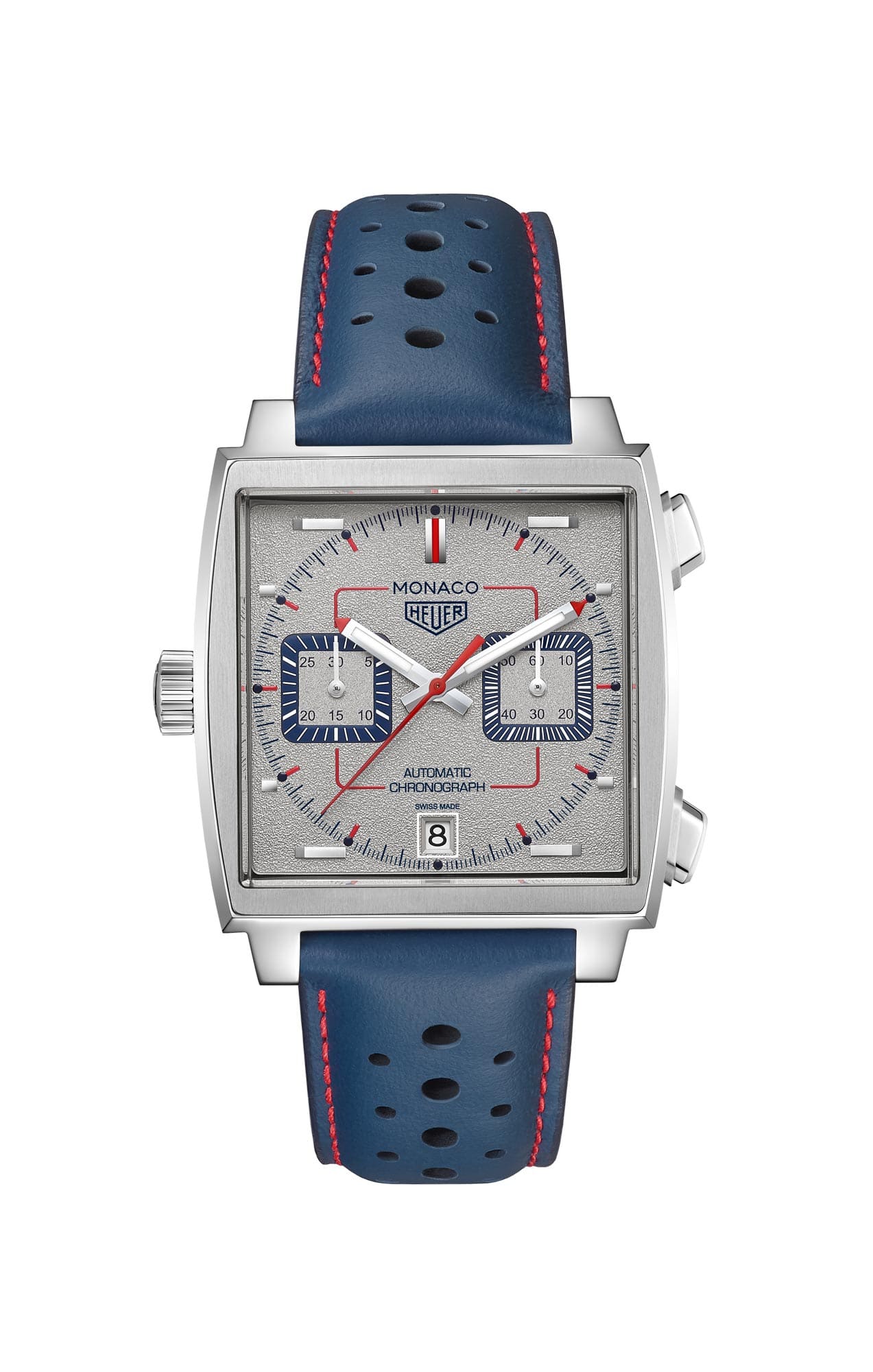 For me, the colors of blue, red, and silver simply belong on a Monaco because, like 99% of people out there, I think of the McQueen watch when this differently-shaped model comes to mind.  And with the TAG Heuer Monaco 1989–1999 Limited Edition, we get those colors albeit with a heavier dose of the silver than the other colors.  The rough-hewn Rhodium-plated dial dominates, but there’s a dark blue main minutes track, logo, and each of the chronograph registers are also outlined in the hue.  Red makes its entrance with just enough of a voice as it shows up on the tips of the hands, the central chronograph hand, and for the outer hour markers.  Finally, there’s a red “box” that fits within the center of the dial.  This final part is a bit of a question, but TAG may have felt that forgoing it would have left too much of a silvery-grey expanse.

A Rally Strap in Blue and Red 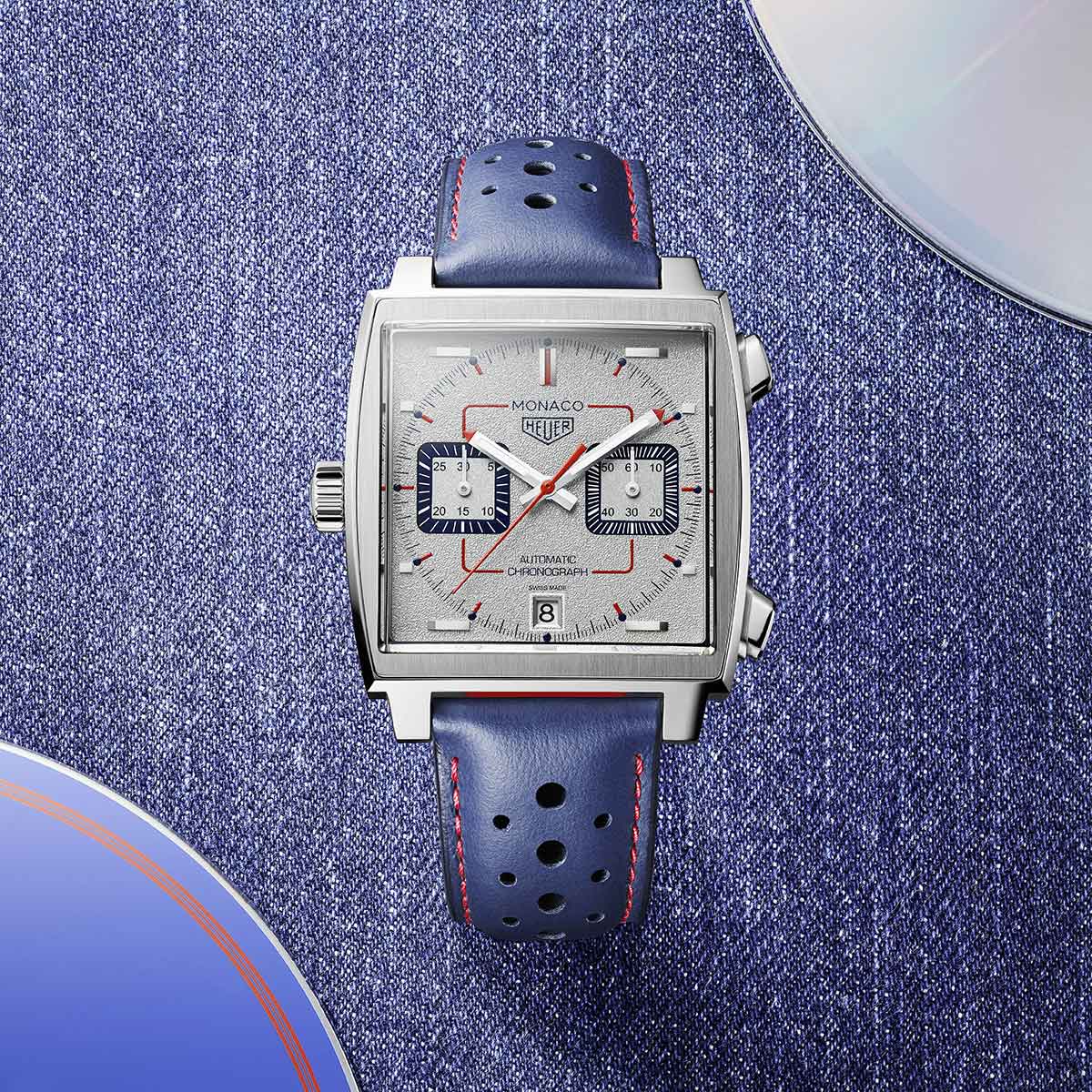 The TAG Heuer Monaco 1989–1999 Limited Edition comes on a blue leather rally strap with red stitching that works well with the dial.  Inside, of course, there’s the TAG Caliber 11 automatic with the trademark crown located on the sinister side of the 39mm case.  Once again, TAG hasn’t bowed to my pile of letters asking for round pushers like the original (I’m kidding, who sends mail today anyhow?) and we have the parallelograms that are familiar to modern Monaco owners.  The case back tells us the model name and that the watch you’re holding is “One of 169”.

As stated, the new TAG Heuer Monaco 1989–1999 Limited Edition is my favorite thus far.  I’ll admit that the colors on the first three don’t really jump out as any one decade per the brand’s marketing, but who cares?  If you like the looks, it doesn’t matter.  This piece looks the most versatile with its slightly more muted color scheme.  At 5,950 Euros and with only 169 pieces in production, I’d guess that they’ll easily find happy owners.

For more information, head to the official TAG Heuer site.

Hot Topics
Introducing: The Omega Speedmaster Super Racing With Spirate System
162 comments
Design Vs. Specs — Which Is More Important To You When Buying A Watch?
86 comments
The Time To Buy Is Now: How The Current Economic Climate Influences Watch Buying And How You Should React
51 comments
My Predictions For New Omega Speedmasters In 2023
48 comments
A Regret-Free Guide To Buying Your First Luxury Watch — Part Three: Higher-End Options From Omega, Rolex, Grand Seiko, And More
48 comments
Popular
Rolex Submariner – Historical Overview Of A Diving Legend
Robert-Jan Broer
22
An Overview Of All Omega Speedmaster Apollo XI Models
Robert-Jan Broer
17
10 Tips For Better Watch Photography
Bert Buijsrogge
12