It doesn’t seem that long ago that Omega introduced their first Speedmaster Moonwatch executed in Moonshine Gold. But it’s actually been three years since the celebration of the Moon landing and the introduction of the Omega Speedmaster Professional Moonwatch Apollo 11 50th Anniversary in Moonshine Gold. It doesn’t feel like it though. Maybe it’s because I have seen the watch quite regularly on the wrist of Fratello’s own Robert-Jan. As you might know, the Moonshine LE has graced his wrist almost religiously after he acquired it. And I completely understand why. Obviously, the story of that watch is incredible. It was released as a tribute to the watch worn on the Moon and the gold watches that were given to the Apollo astronauts in November 1969. But there is more to the watch than just its story. 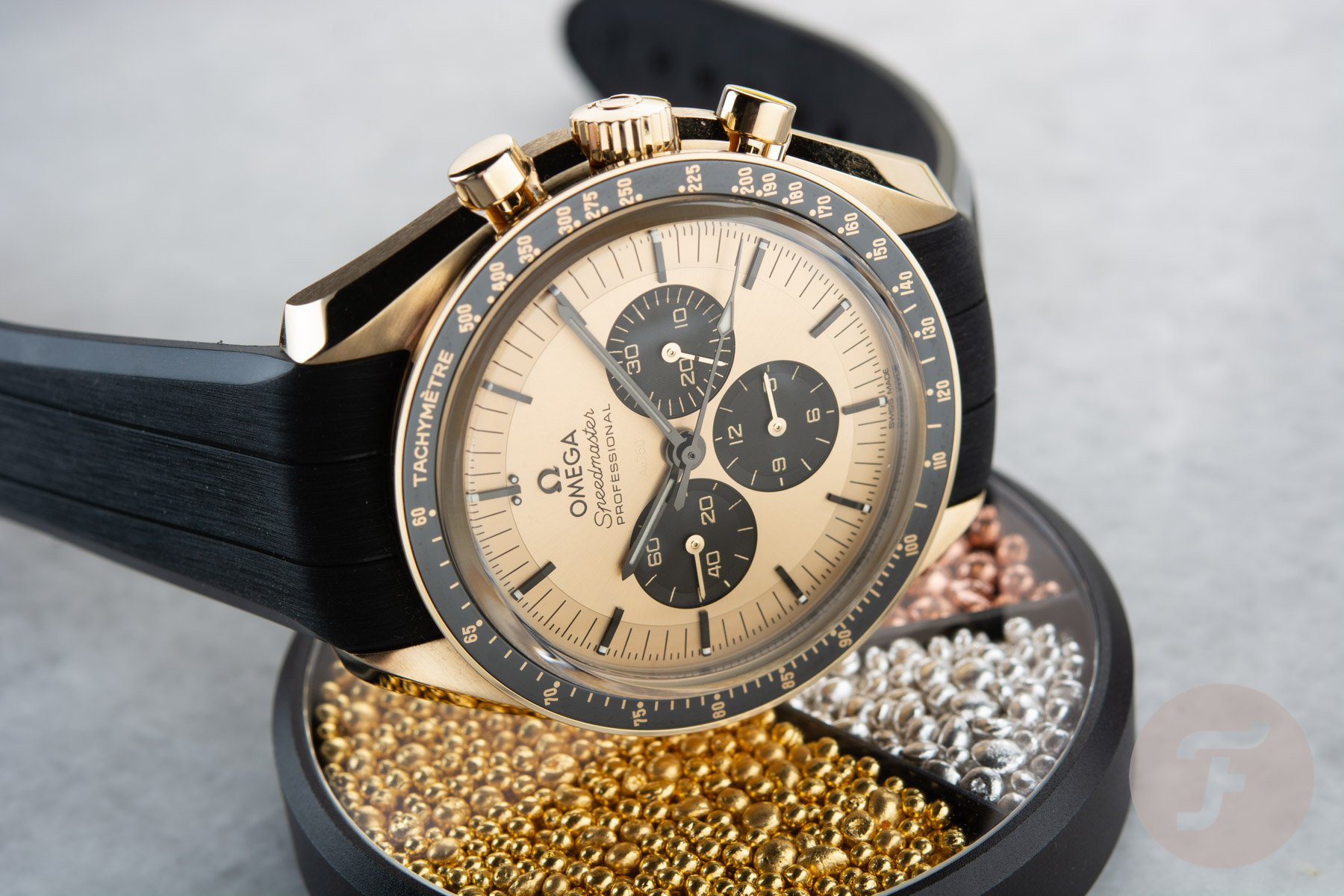 The magic of Omega’s Moonshine Gold

Collectors that have been able to get their hands on one of the 1,014 pieces that were produced, unanimously praised the execution of the watch. Maybe even the most impressive part of that execution has been the use of Omega’s proprietary 18K Moonshine Gold. This special alloy comes with a lighter, more pale hue than regular 18K yellow gold. It gives the watch a more distinguished and less flashy appearance than regular yellow gold watches. It’s a look that fits the functional and non-pretentious appearance of the Speedmaster perfectly. The combination of Moonshine Gold with the burgundy dial and the black onyx hour markers looks incredible. It has made the Speedmaster Professional Moonwatch Apollo 11 50th Anniversary one of the best and most iconic Speedmaster releases of the last decade. 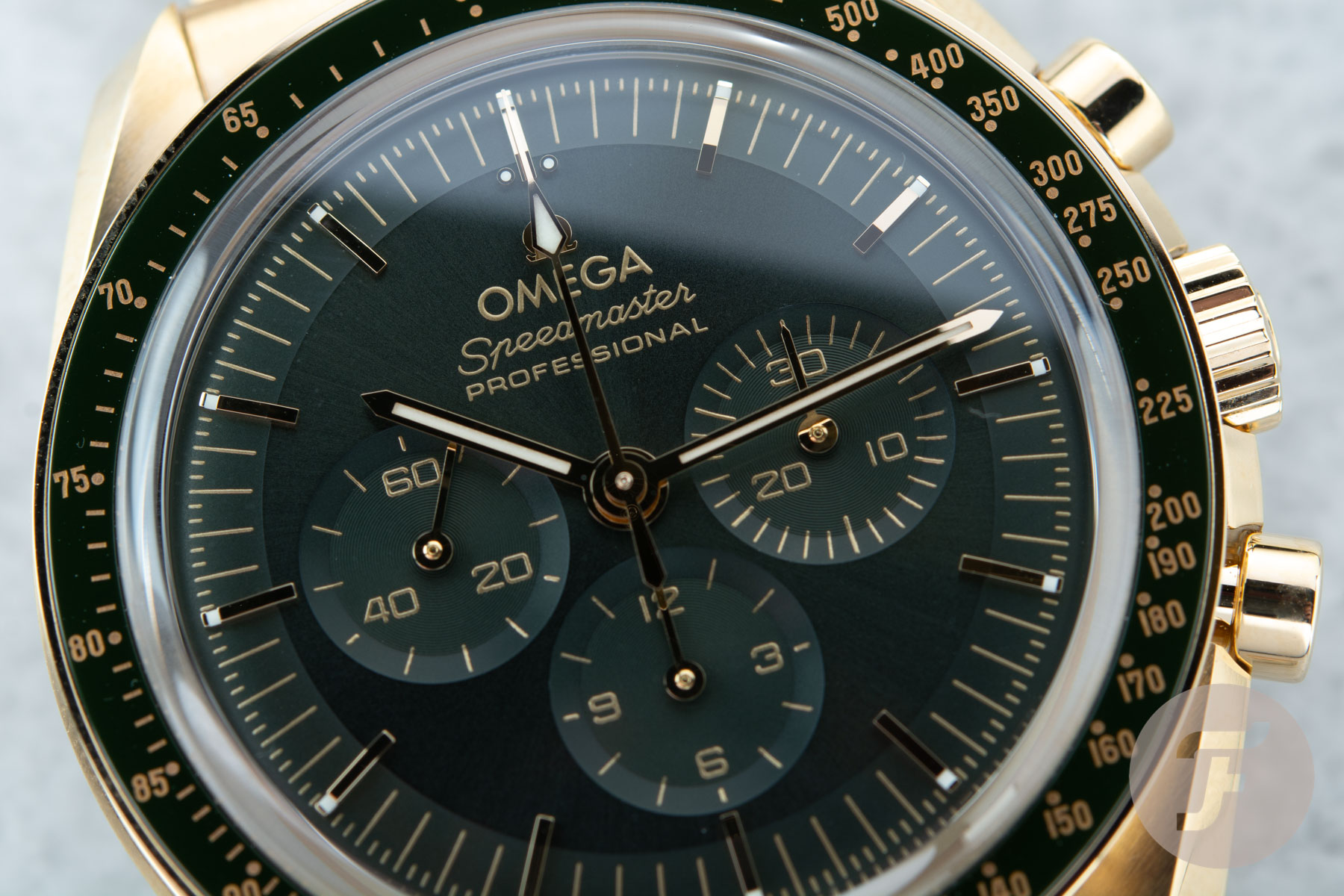 Today Omega continues the story of their Moonshine Gold Speedmasters with two new impressive models. The first is a very stylish panda dial version with a black Ceragold ceramic bezel and a solid gold dial with a sunburst finish and black subdials. The second model is executed with a green Ceragold ceramic bezel and a brass dial that gets a green PVD treatment with a sunburst finish. They are great additions to the Moonwatch collection and give the Sedna Gold and Canopus Gold models a good run for their money. 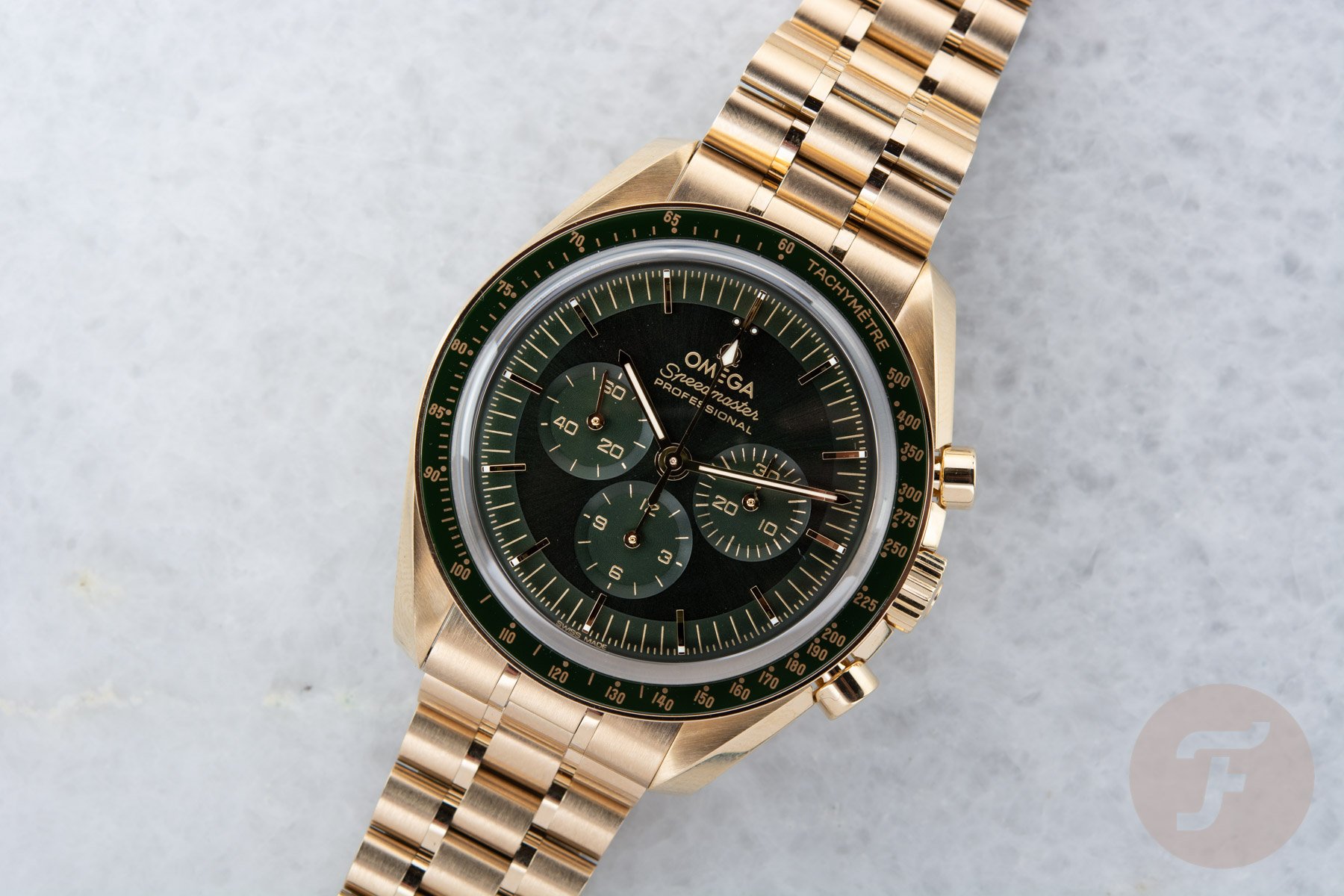 Let’s start off with the green Speedmaster Professional Moonshine Gold ref. 310.60.42.50.10.001. As it is the current Speedmaster Professional, most of you will be familiar with its specs. But let’s remind ourselves quickly. The watch comes with a 42mm Moonshine Gold case that is 13.18mm high and has a lug-to-lug 47mm. The case is the same as used for the other models in the collection. The watch comes with the same gold bracelet that is used for the other Moonwatch models. It tapers down from 20mm at the lugs to 15mm at the clasp. The clasp comes equipped with a comfort release adjustment (extension) that adds 2.3mm. Some of you might have spotted there is a slight difference in the execution of the bracelet compared to the other gold models. The bracelet of this Moonshine version features polished inlays that add a bit of extra flair to the overall looks. 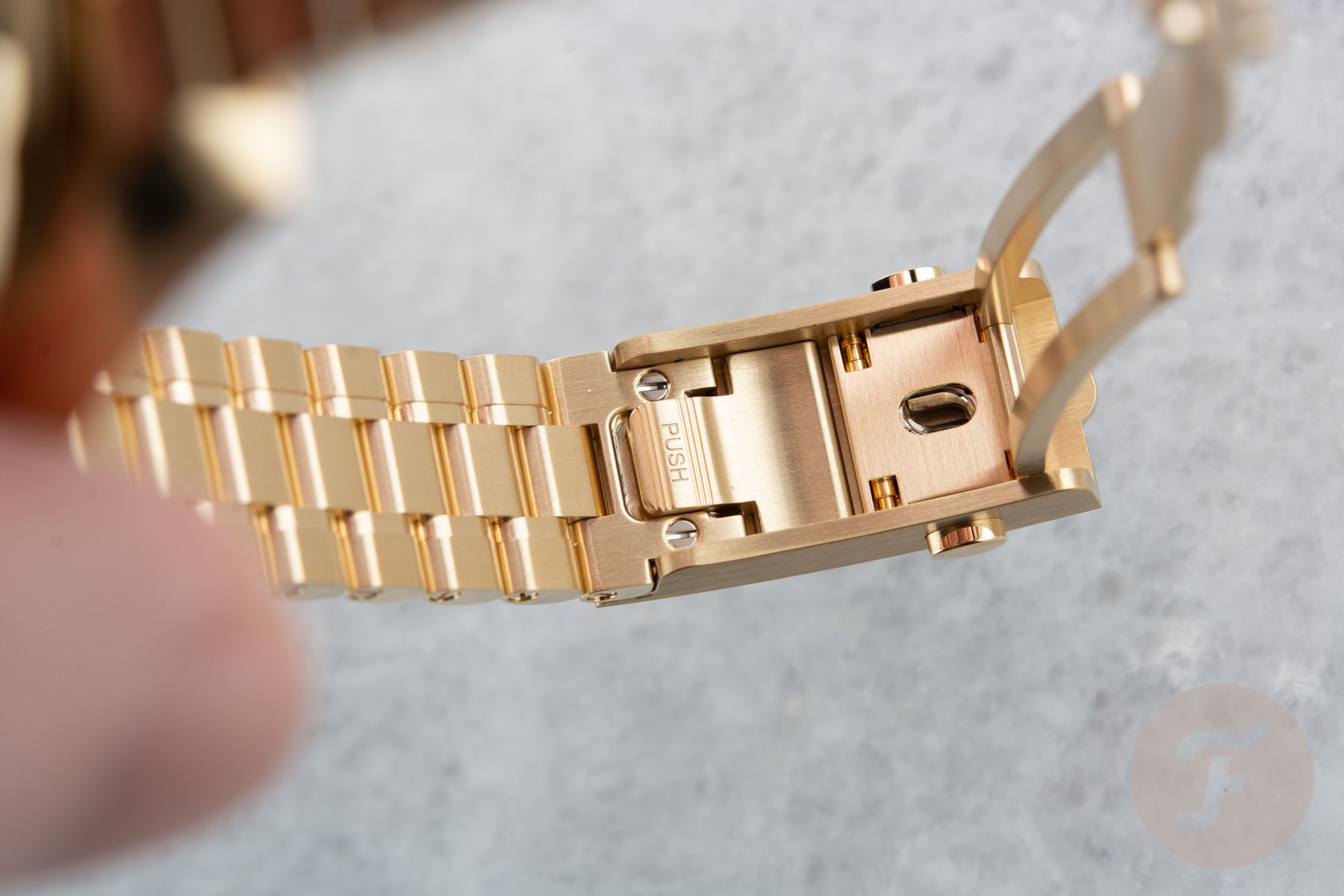 To contrast the Moonshine Gold, Omega has chosen a very dark green color for the dial and the bezel. I had to look at it twice to realize how dark the green really is. While I am usually not the biggest fan of the green and gold combo, I love this combination of colors. The pale Moonshine gold works very well with the very dark color of the dial and bezel. The Moonshine Gold bezel features a green ceramic bezel inlay with a Ceragold tachymeter scale with “Dot Over Ninety” (DON). The brass dial gets a green PVD treatment so it matches the green of the bezel. The hands and hour markers are also executed in Moonshine Gold and filled with Super-LumiNova. The Moonshine Gold elements contrast gracefully with the dial color creating an overall very chique dial. 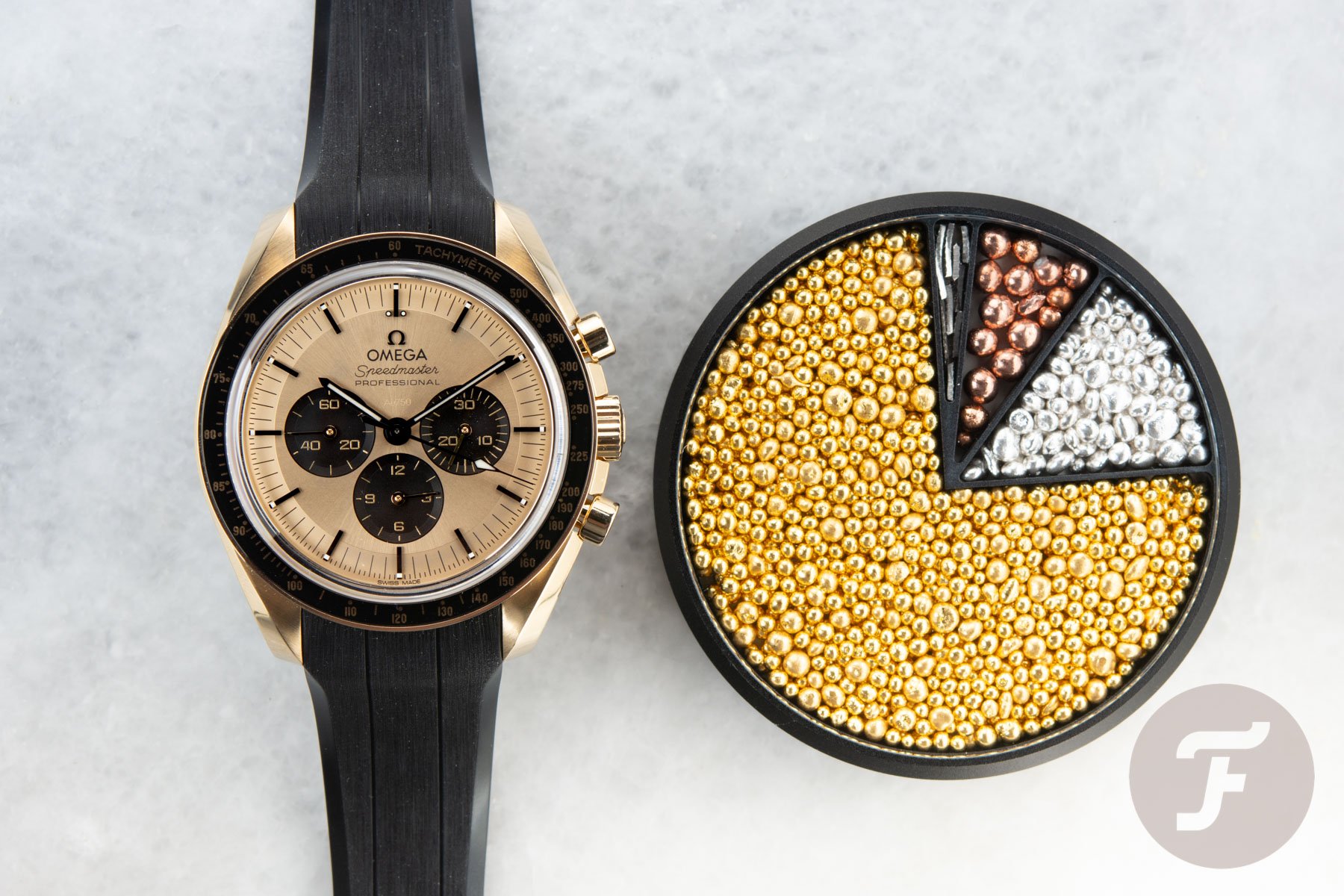 The second model is the Speedmaster Professional Moonshine Gold executed with a gold panda dial ref. 310.62.42.50.99.001. The solid gold step dial features a sunburst finish and black subdials. To contrast with the gold dial, Omega chose to treat the Moonshine hands that and hour markers — filled with white Super-LumiNova — with black PVD. The black Ceragold ceramic bezel adds even more contrast with the light hue of the Moonshine gold, resulting in a very nice timepiece that is the perfect combination of a classic combination of colors in a brilliant modern execution. 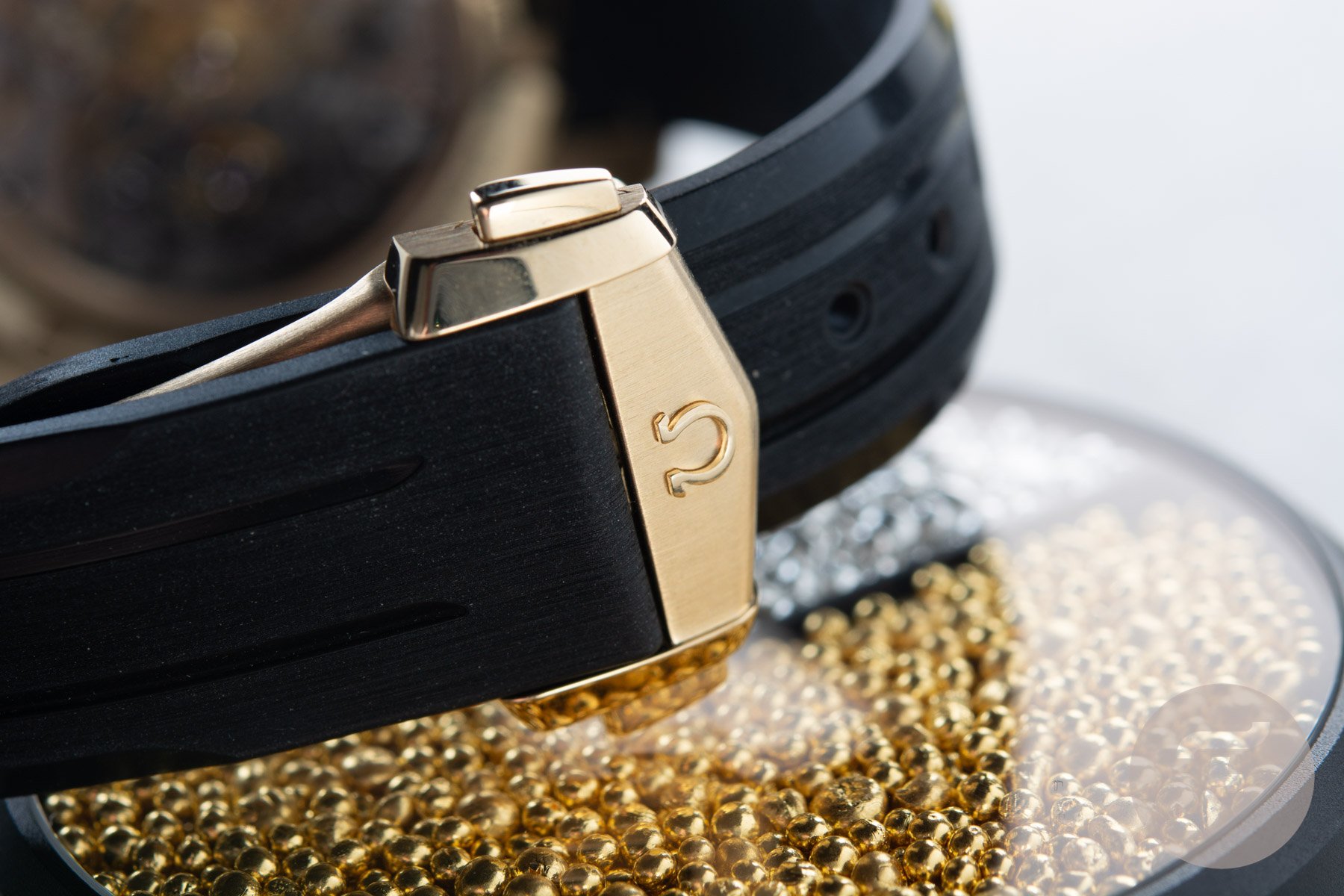 The modern execution also comes courtesy of the new matte rubber strap that Omega chose to use for this model. It’s a first for the Moonwatch to come on a rubber strap and it fits the watch well. In good Moonwatch tradition, Omega has made it something special. The black rubber strap features a lunar surface texture on the inside of the strap and comes with a Moonshine Gold foldover clasp. It tapers down from 20mm to 16mm at the clasp. The lunar surface pattern adds both a visual as well as textural element to the strap. Overall the look becomes a bit more sporty without losing that typical Moonwatch feel. Inside the case of both watches, you will find the Omega Caliber 3861 that is visible through the sapphire crystal case back. This familiar movement powers all the current Moonwatch models. Omega uses the rhodium-plated that also powers the other current Moonwatch models. As such the 2019 Speedmaster Moonshine Apollo 11 50th Anniversary remains the only model that has a Moonshine gold Caliber 3861. The manual winding movement operates at 21,600vph, has 26 jewels, and has a power reserve of 50 hours. 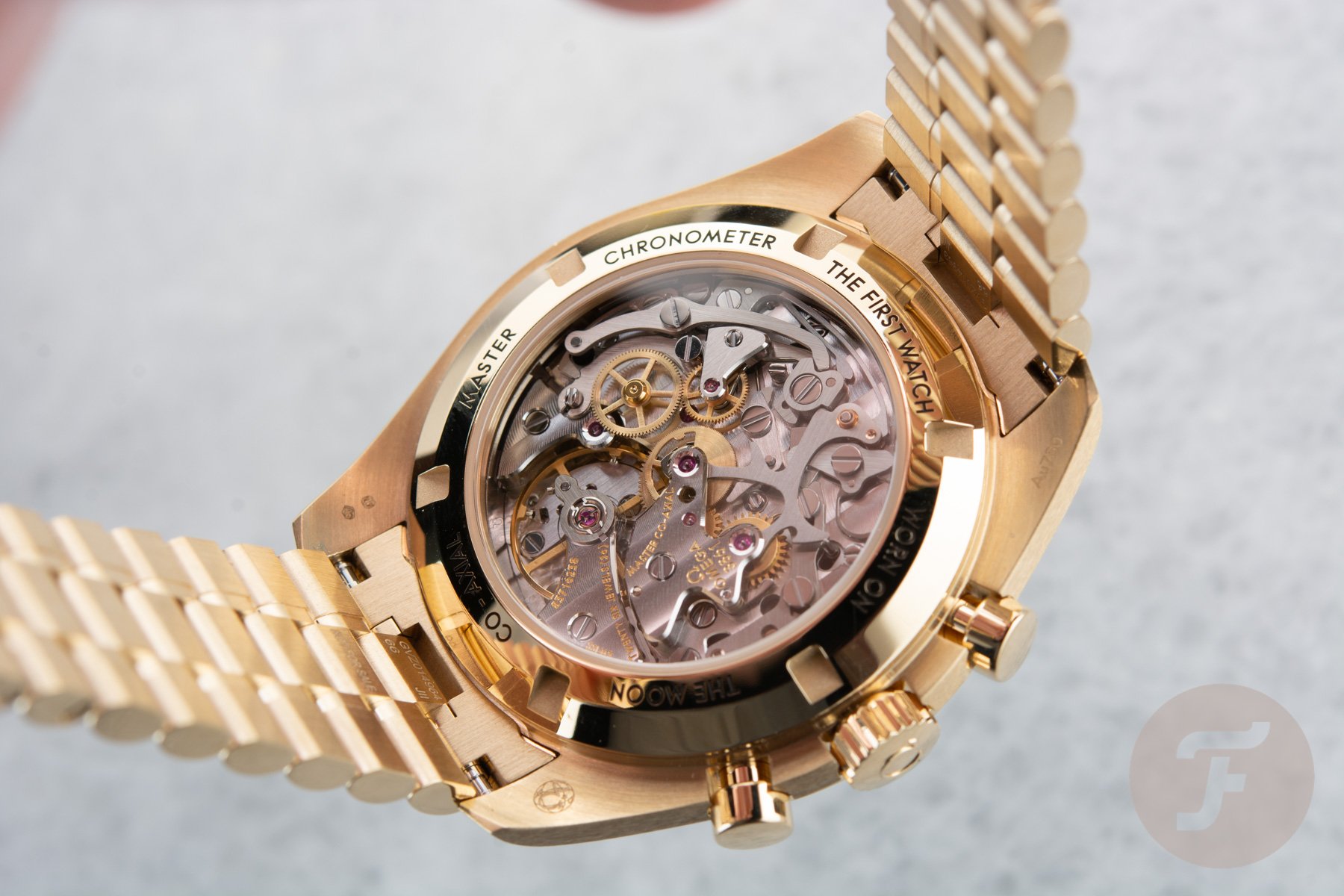 The movement is equipped with a Co-Axial escapement, which results in less friction and higher accuracy. The accuracy of the Caliber 3861 is between 0 and +5 seconds per day on average, officially certified by METAS. Additionally, the movement is able to withstand magnetic fields of >15,000 gauss and comes equipped with a hacking feature. Despite there is nothing new about the movement, seeing the movement in action is still a joy. 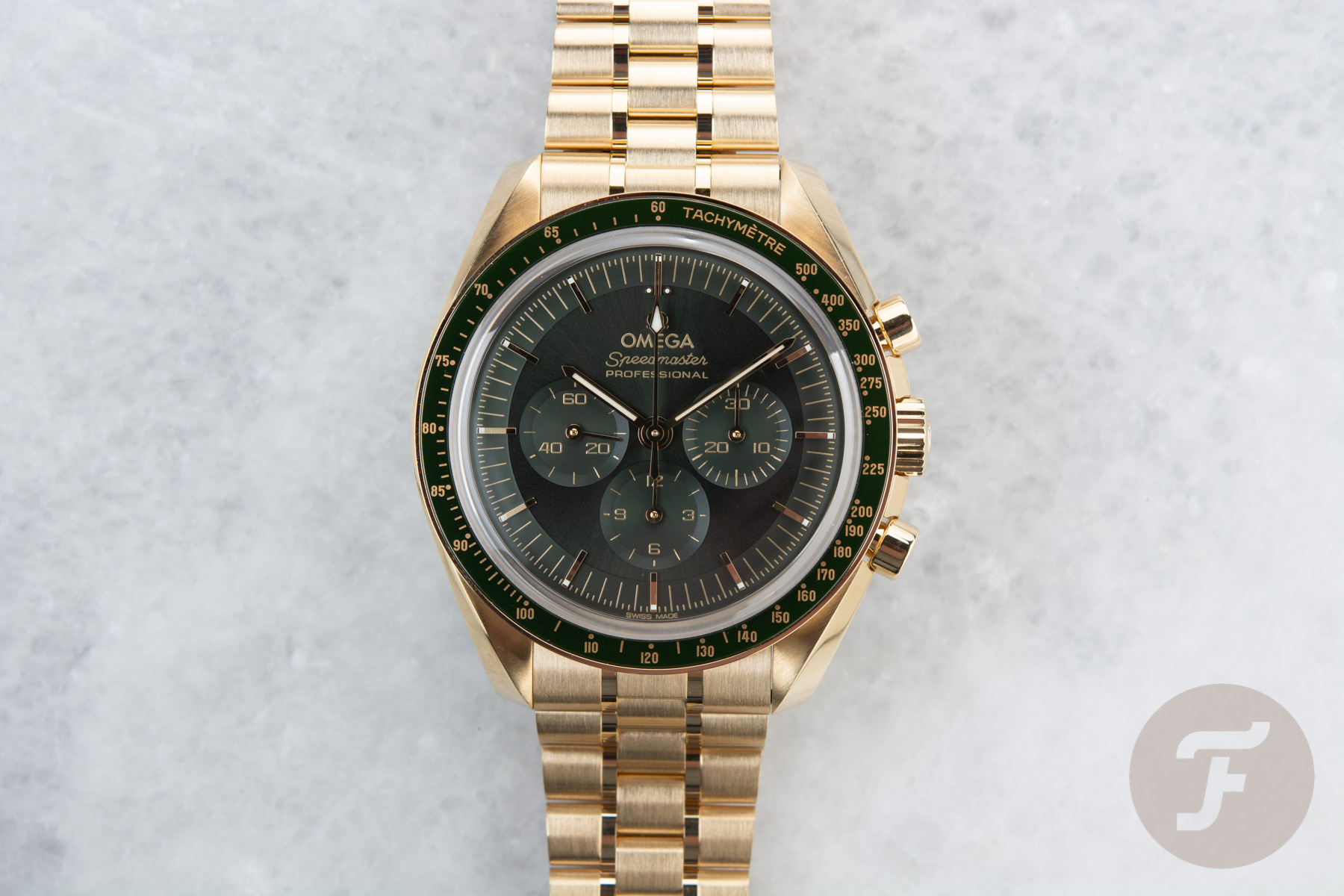 When I first saw these two new Moonshine Gold Moonwatch models, I had to let them sink in for a moment. We have seen quite a few really impressive gold Moonwatch releases and I was trying to find out where these two models stand compared to other models. And I mean that in a good way. Overall the current Speedmaster Moonwatch looks amazing in the different gold executions. Where the Canopus Gold edition was my favorite up until now, it has some stiff competition from this new Moonshine Gold version with the green dial and bezel. 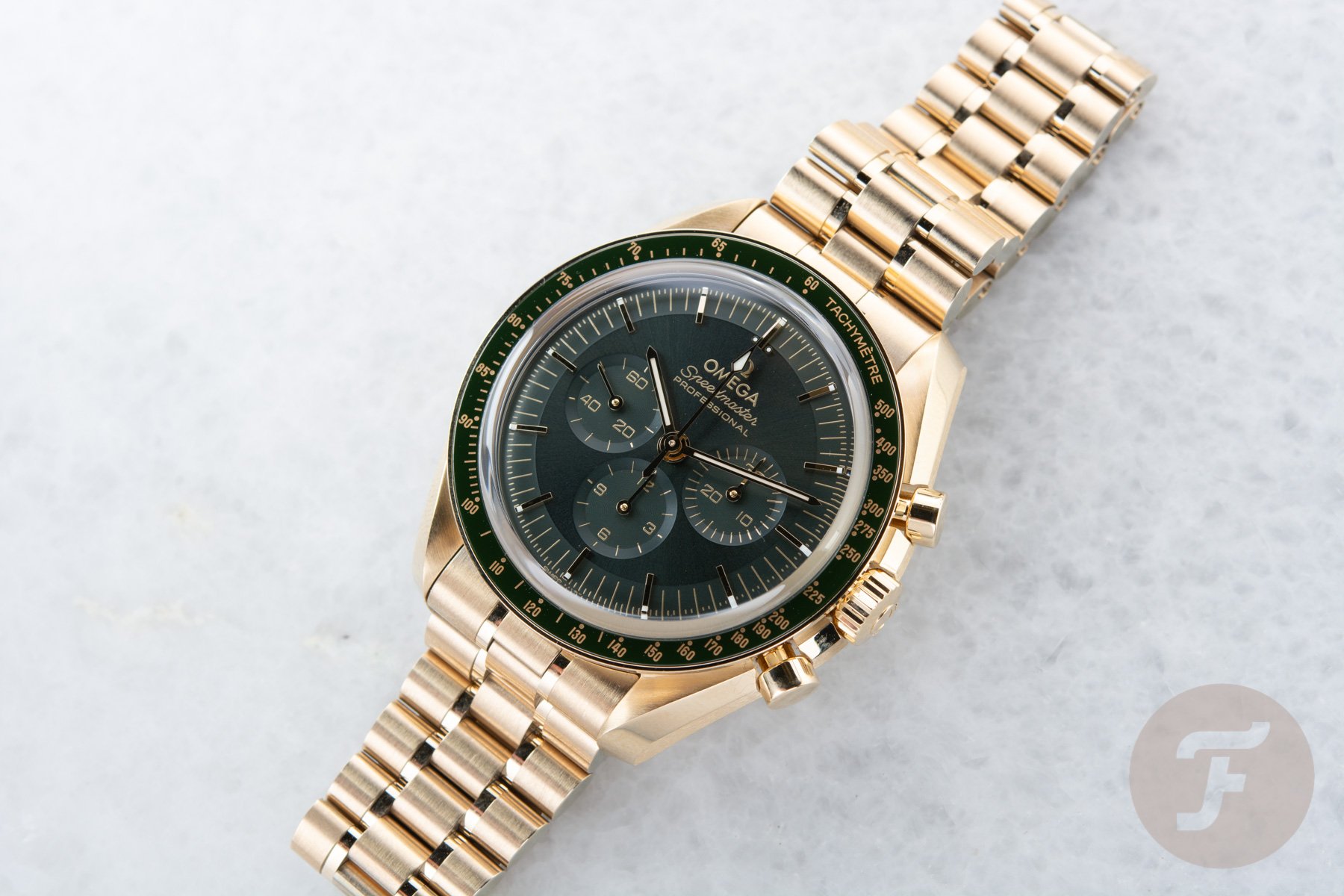 After being able to check them out for a bit, I have to say that Omega has managed to come up with two more very impressive models for the Moonwatch line-up. The color green the brand has picked really impressed me. On top of that, seeing a Moonwatch on a rubber strap is also something new and refreshing. Both models will surely have people talking. The price of the panda dial version on the rubber strap will be CHF 24,400 without tax (€27,900 incl tax). The full Moonshine Gold version with the green dial and bezel will be CHF 32,200 without tax (€36,800 incl tax). The release date for the watches is to be confirmed.