The ventura v-matic EGO has been resurrected.  Fans of the 90’s brand and newcomers alike will find this new release highly satisfying.

I received an email from the team behind the new ventura Watches several weeks back with the announcement that the brand was officially being relaunched with the ventura v-matic EGO.  I had certainly heard of ventura Watches and as someone who started admiring timepieces during the 90’s, I had flashbacks.  ventura Watches was first founded in 1989, but it wasn’t until 1994 that the brand gained real fame.  Enter Swiss designer Hannes Wettstein and his uniquely modern form follows function designs that found their way to ventura.  I recall seeing these in watch magazines at the time and also in stores, but at some point in early 2010’s, the brand ceased production.  It’s also worth mentioning that Wettstein tragically succumbed to cancer in 2008 at the young age of 50. 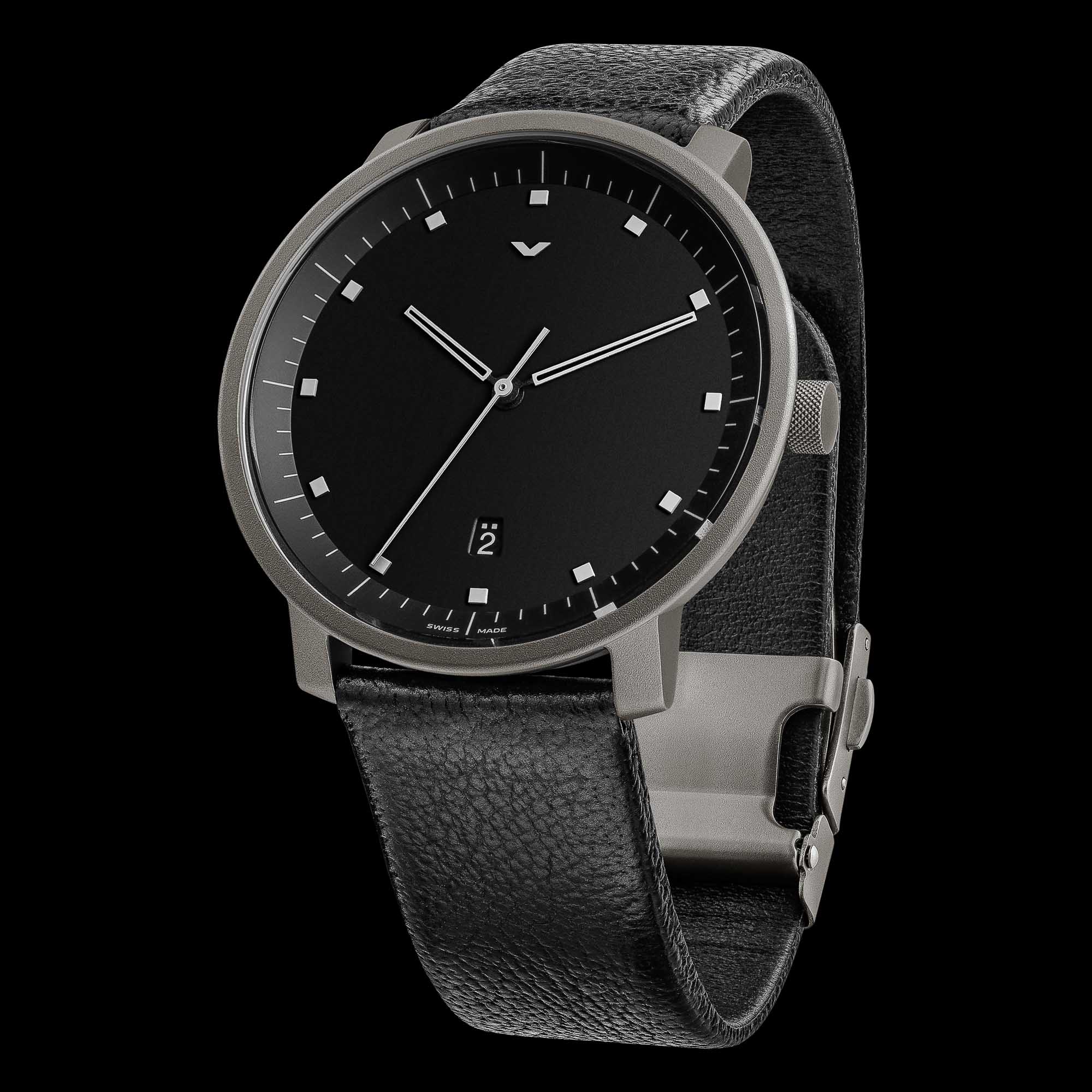 In 2016, Stephan Hurlemann, a friend and colleague of Wettstein, made it his mission to restart things with the ventura v-matic EGO.  And, in order to keep the watches accessible, they’ll be sold directly via the ventura’s new site.  Keep in mind that these were quite expensive watches in the 90’s and were made from all sorts of case materials such as titanium or even platinum.  Some were even chronometer rated.  Things will start at more simply at first as the watches will be launched on Kickstarter in order to generate interest and gain feedback directly from supporters.  Let’s take a closer look at what will initially be available. 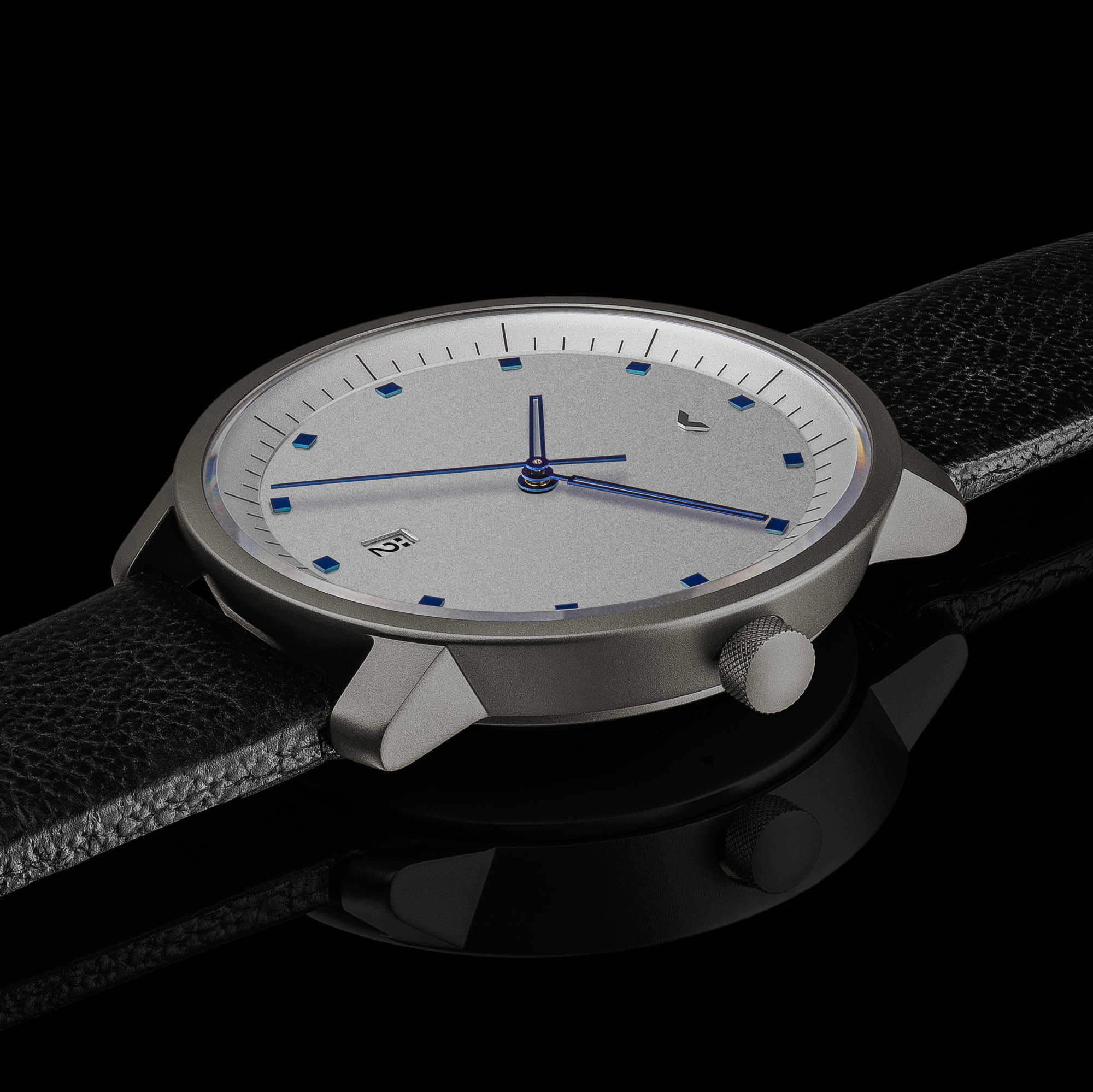 The ventura v-matic EGO – in Satin or Black

The ventura v-matic EGO will be available with either a black or satin sandblasted dial.  The 41mm case (the same as the 90’s model) is PVD-coated and hardened titanium and also features a sandblasted finish. 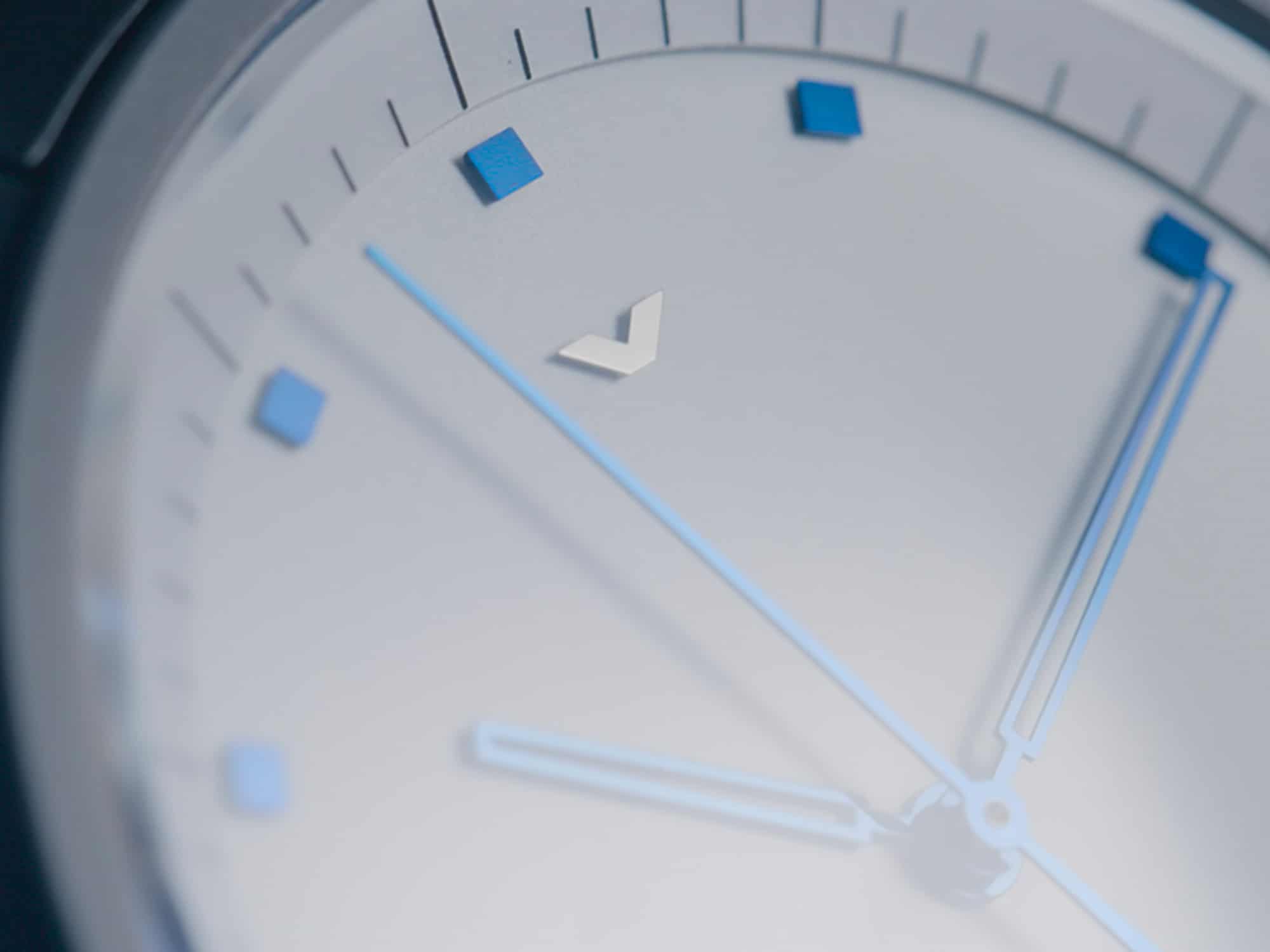 In looking at original 90’s versions of the ventura v-matic EGO, the dials look quite similar with their simple applied square indexes and downward sloping chapter rings.  Ditto for the modern skeleton hands. 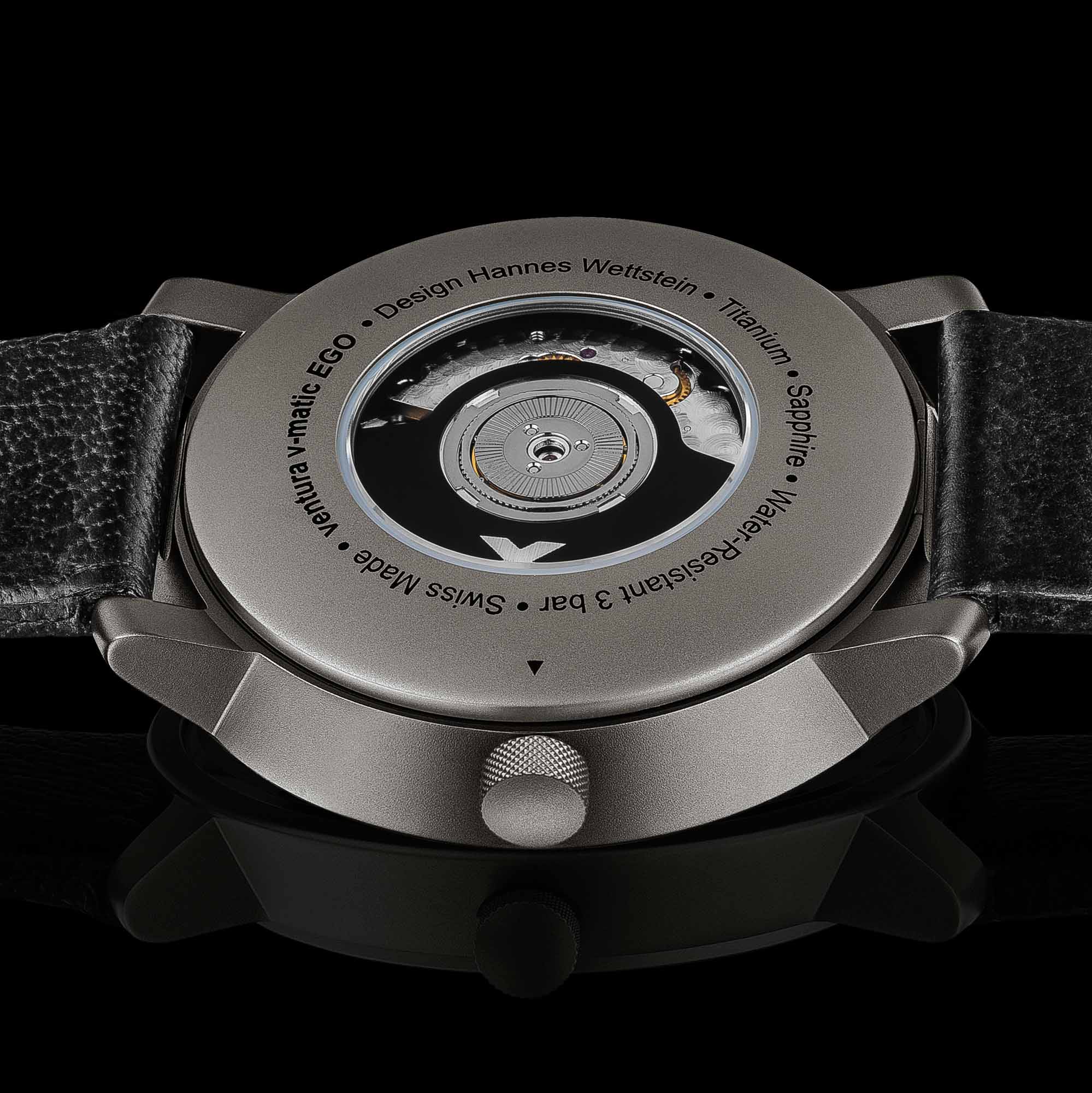 Inside the ventura v-matic EGO is the venerable ETA 2892-A2 with a custom black rotor.  This means that the watch contains hacking and a quickset date function.  That date is located at 6:00 and contains stylistic “dots” on the date wheel that are a hallmark of the original design.  A snap-on sapphire display case back is inscribed just like the watch’s ancestor and with the fact that Wettstein was responsible for the design. 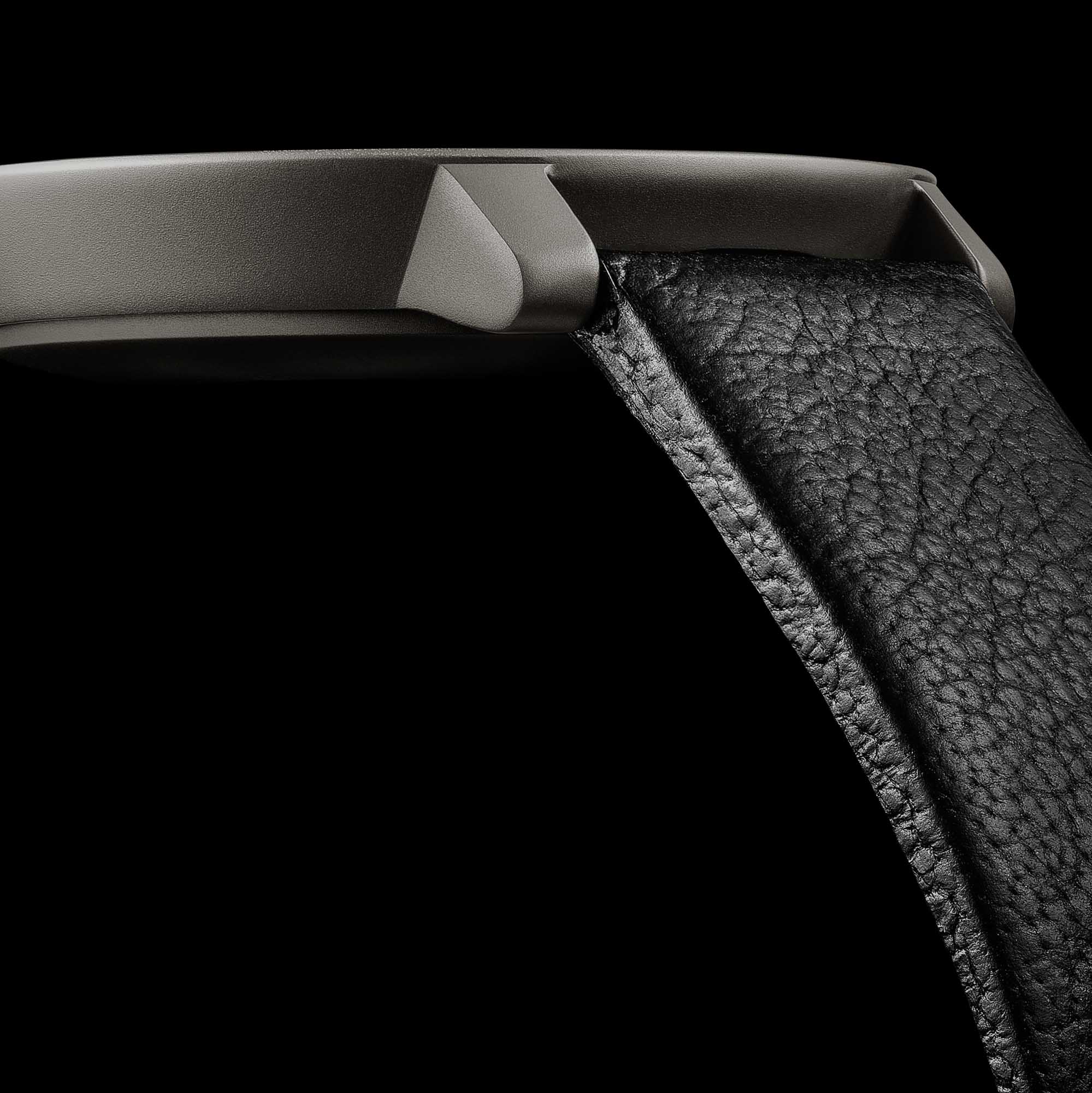 The 90’s were an interesting time in watches and, honestly, a period that many watch collectors deem as forgettable.  A watch like the original ventura v-matic EGO is a bright spot during the era and marks a time when things like Ikepod existed and a few other cutting edge designers were able to put their efforts into wristwear.  For that, I’m happy to see the return of ventura and its slim designs that hug the wrist perfectly well while eschewing superfluous additions to the dial and case. 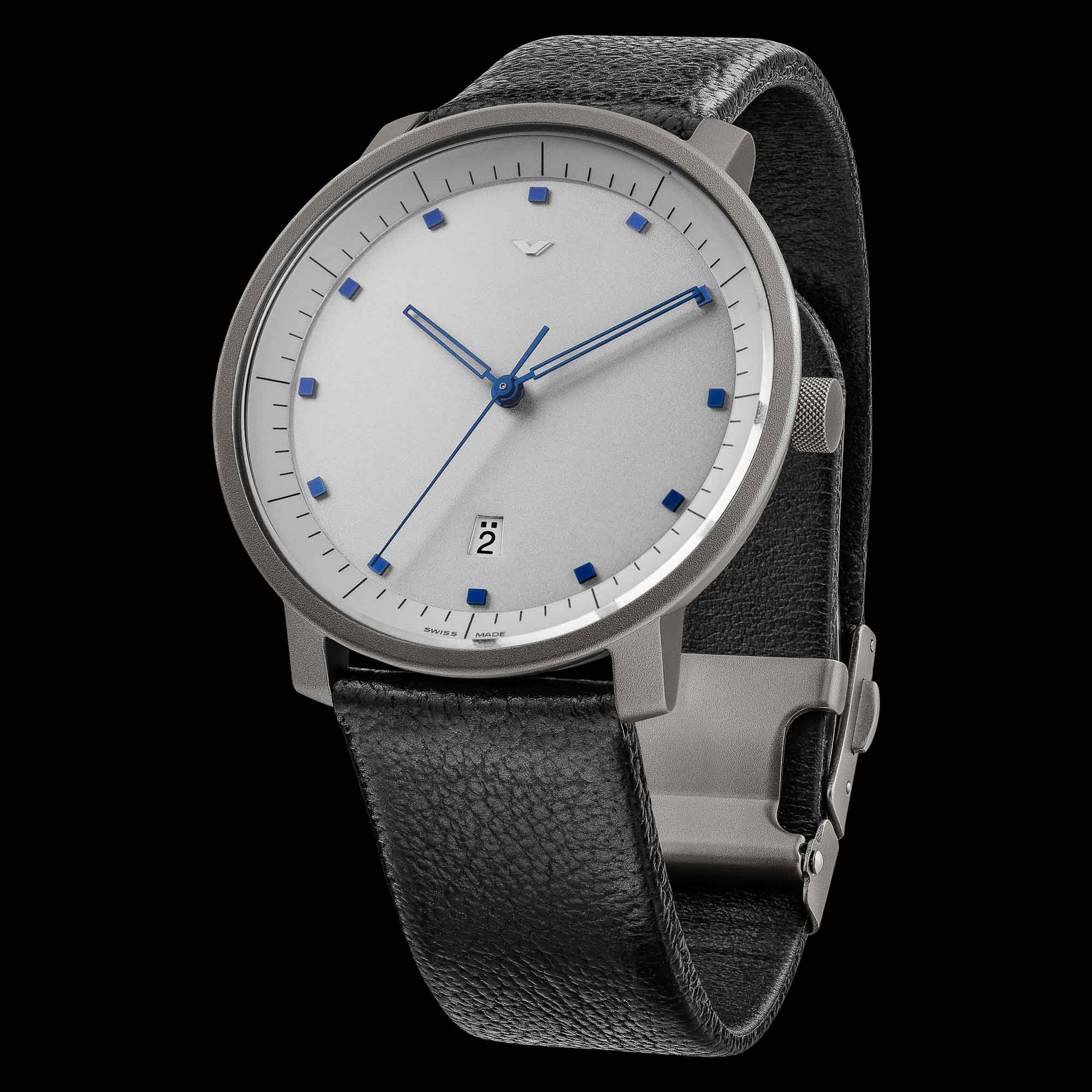 The best thing is that the Kickstarter campaign launches today and supporters will be able to back a new ventura v-matic EGO for only 800 Euros on a calf leather strap or 885 Euros on bracelet.  Once the launch ends, things escalate to 1200 Euros on strap and 1385 Euros on bracelet.  From what I see in the pictures, this piece is an extremely faithful reissue of a cult classic.  With timeless looks, a sound movement, and a case made from titanium, I think it’s been a worthy journey for Hurlemann.  Hopefully, we’ll get our hands on one and then we’ll come back with additional thoughts.