You could be forgiven for not being familiar with the name Christian Etienne. I personally wasn’t, not until news of his latest endeavor, The Ω Project, arrived in my inbox. After just a brief read of the profile available on his website, it was plain to see that Christian was quite an interesting character. Having grown up in the village of Porrentruy in the Jura region of Switzerland, he was no stranger to watchmaking. In fact, he was surrounded by it from a young age with his family being personally involved in the industry. They created the red jewels found in mechanical watch movements. Christian got involved in watchmaking, and after his formation, became a specialist in restoring rare clocks, pocket watches, and wristwatches, as well as teaching in the Porrentruy school of watchmaking (now known as the CEJEF Division Technique).

A few years later, in 1996, his life changed. This is when Christian Etienne joined the ranks of Audemars Piguet Renaud & Papi’s watchmakers. This was quite the change of pace. He went from restoring vintage clocks to assembling complex modern movements for a luxury brand. Here is where Christian learned everything that enabled him to pursue a career in watchmaking. He worked with some big names in the field, such as Ulysse Nardin, Paul Picot, Parmigiani, Greubel Forsey, Girard-Perregaux, and Omega. A highlight of his work took place during his time with Richard Mille, finishing and assembling the brand’s incredible perpetual Planetarium-Tellurium. In recent years, Christian Etienne has continued to pursue his passion by creating a number of watches as an independent watchmaker. Pressure was put on him to make more watches, and thus, he decided to create a special series. This is how The Ω Project was born.

So what exactly is The Ω Project? In short, it’s Christian Etienne’s effort at producing a series of watches rather than one-off pieces for his customers. Serial production is not as simple as it might sound. You have to find reliable sources for a number of components. From cases to crystals, straps, dials, and most importantly, movements. The difficulty was to source from quality Swiss manufacturers in small quantities. Christian isn’t trying to turn this into a mass commercial success. Instead, the mission is to create something special and limited that only true, passionate horology enthusiasts will enjoy. The first step was to source movements.

But what would be a perfect choice? The goal was to meet two criteria. The first was that it had to be a reliable, robust, proven timekeeper. And the second was that the movement used should ideally be a caliber with pedigree and an interesting historical background.

In Switzerland, it wouldn’t be too difficult to find a small number of movements fulfilling these criteria. However, in order for the series to be successful, Christian would need more than just a handful. The perfect candidate came to mind — Omega’s 30mm calibers. As Mr. Etienne puts it:

“This series offers a reliable, robust, and precise movement, large enough in diameter and with a certain robust thickness and size allowing for a large winding barrel, a large balance, and a classic Breguet overcoil. In this way the construction of the Omega T30 series of movements is ideal.”

So, having found the ideal movement(s), it was time to source enough to make The Ω Project a reality. It took two people two months to source enough movements from both Switzerland and abroad. It all started with 20 test calibers, of which Christian preferred the older version, the 30T2. He decided to subject the movements to a specific level of re-finishing. This includes lapping, beveling of the bridges, and different finishing for the movement’s surfaces. On top of this, applying a 5N rose gold finish to the bridges and blueing of screws and the regulator index gave the calibers sufficient visual distinction.

Watch purists, you can look away now! But whereas my initial reaction to the idea of re-finishing vintage Omega movements was also not the most welcoming, the results speak for themselves. And if it makes you feel better, just think that otherwise, these movements would be sitting in a drawer or in an old, broken watch.

Instead, Christian transforms them into something new. It’s the ultimate form of horological upcycling — taking vintage Omega movements and making them his own, using decades of watchmaking expertise to elevate the movements aesthetically. One key detail of the process is the lapping of the base plate. The logic of this process is the following:

“My reasons for lapping the baseplate was to provide the whole caliber some visual depth perception which would also accentuate other components; it also allows more light into the movement which is visually very attractive.” 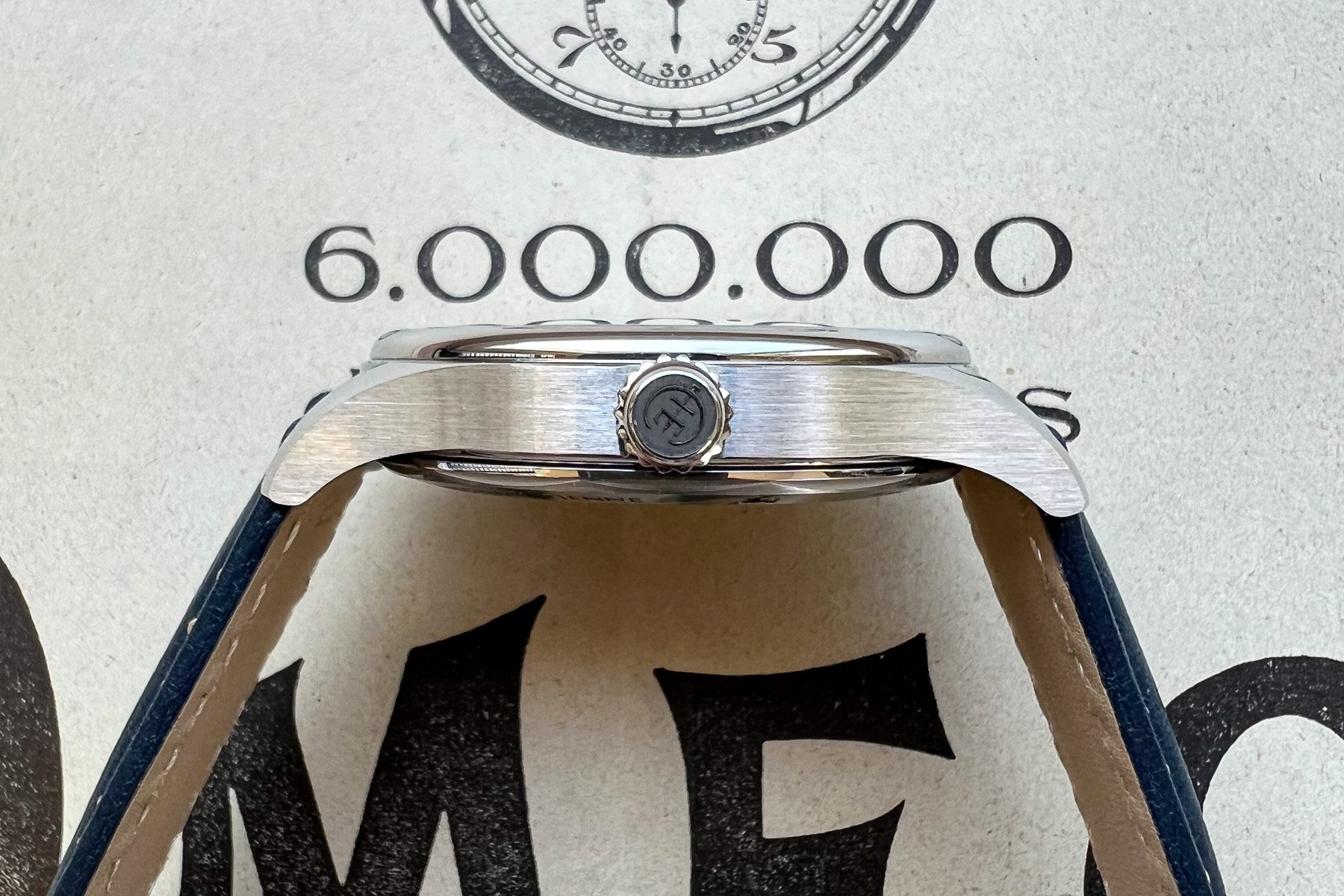 Christian Etienne fully services and refinishes the movements, which, in itself, is already quite a task. But his work doesn’t stop there. After all, The Ω Project is a series of watches. And going from movement to completed watch is no simple feat. You need cases, dials, hands, straps, crystals… the works! But there is no better place to be in order to make a project like this come to life:

“Living as I do in the center of a watchmaking town filled with centuries of watchmaking tradition, I was able to find the best specialists for every detail that I desired concerning my dials, cases, engravings, and even straps to complete my project. I am also proud to tell prospective clients that despite the relaxing of standards required for registration of a watch as ‘Made in Switzerland’, my timepieces, including the vintage calibers I use, are 100% manufactured and assembled here in the watchmaking heartland of Switzerland.” 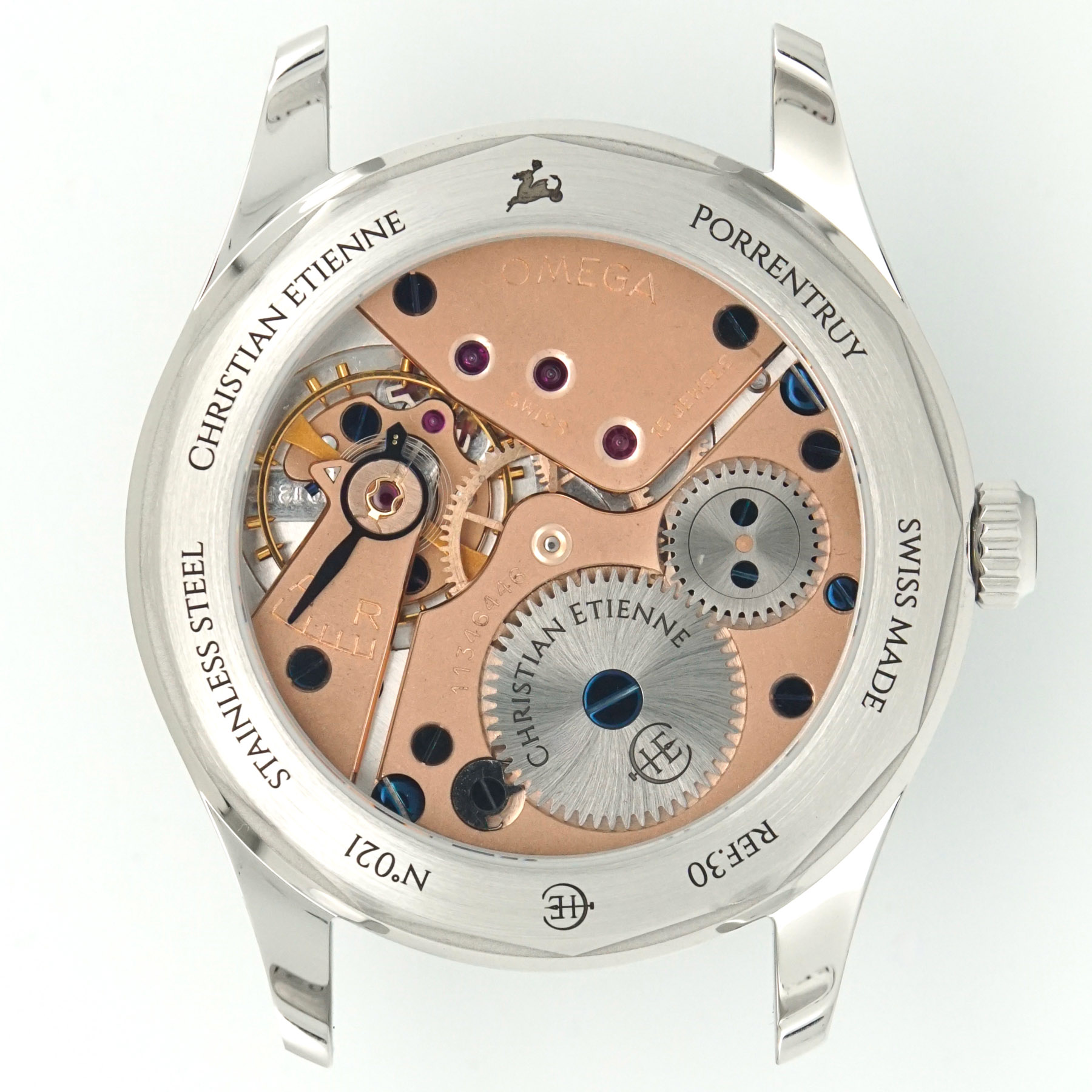 But the refinishing of the movements is not where Christian’s influence stops. He had his hand in the design of all elements of these watches. The final detail is the running seconds hand, as he explains below:

“The cases, dials, hour and minute hands are all of my own design, produced by local and traditional high-quality specialist firms here in Switzerland, including the straps. The running seconds at 6 o’clock I use are actually original, new old stock Omega hands.” 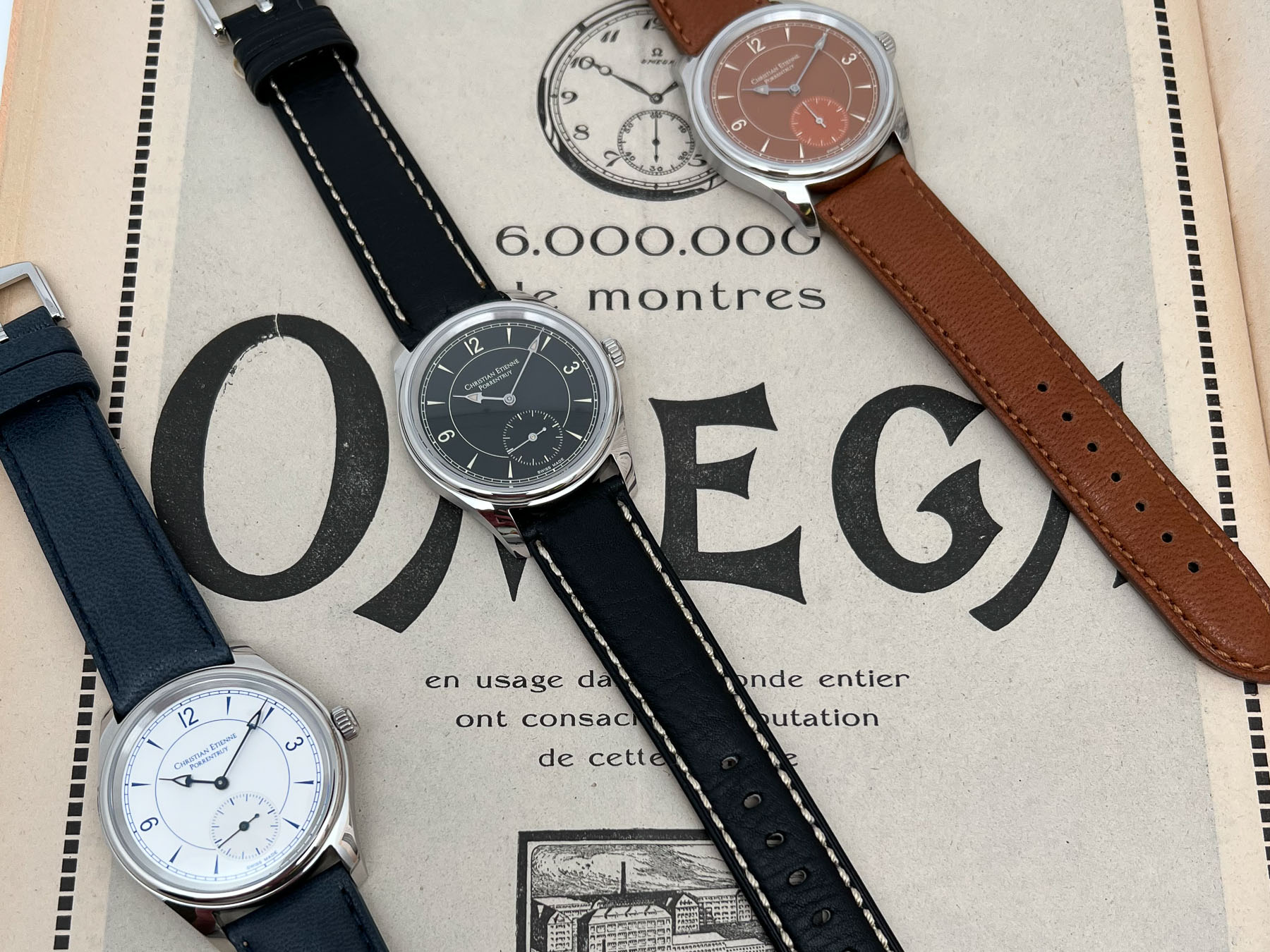 In the press release provided, the three timepieces created are referred to as “the first series”. I don’t want to read too much into this, but it might well mean that there will be more in the future. For now, let’s take a look at the three models that mark the debut of The Ω Project. The first series includes a silver dial (Model 267-R-841), a matte black dial (Model 30-R-815), and a satin brown dial (Model 266-R-822). All three watches share the same 316L stainless steel case. It has a classic design, but at 39mm, the sizing is rather contemporary and extremely wearable. The watches all have a sapphire crystal and an exhibition case back through which the masterfully refinished movements can be admired. 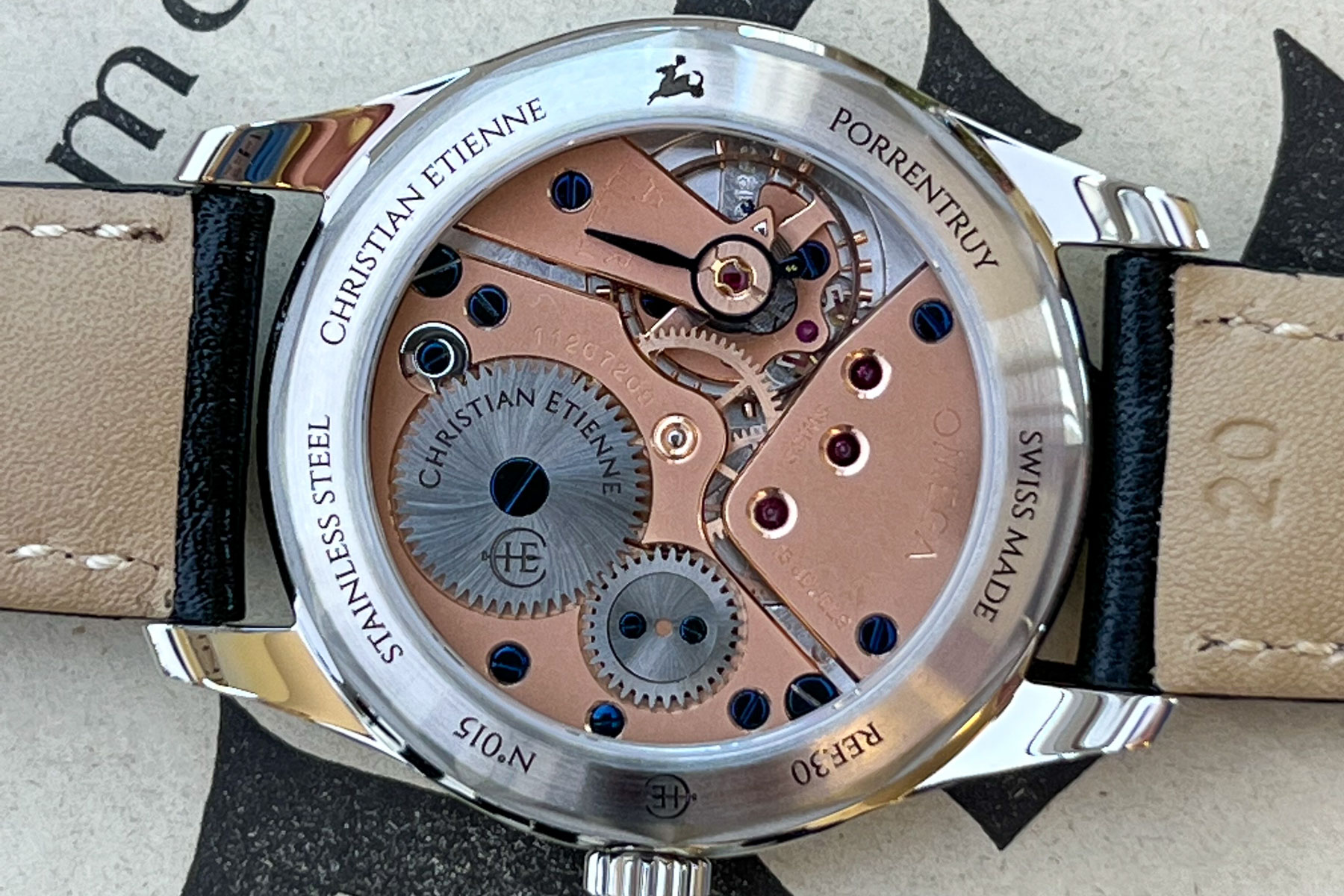 All you need to know about what’s inside the watches is perfectly summarized by Christian in the following lines:

“All of the Christian Etienne watches shown below are created in very small numbers, and each of them utilizes a new old stock caliber from the famous and classic Omega 30T2 range and its variants with the nomenclature 266, 267, and others. These original vintage movements are completely disassembled, given a full assessment and quality control with parts replaced if required, thereafter cleaned, refinished and polished, followed by reassembly, then casing and timing.” There you have it, my dear Fratelli, Christian Etienne’s The Ω Project. A work of horological passion and culmination of decades of watchmaking. There is something beautiful about taking something old and unused and breathing life into it. When possible, it’s great to restore the original, but when it isn’t, as is the case with these Omega movements, it’s fantastic to give them a whole new life. This is especially true in watches that have the same care and mindfulness put into them as the originals. Overall, I’m glad to have had a chance to find out about Christian, The Ω Project, and these three stunning watches, and I hope you will feel the same.

For this first series, five watches of each reference will be produced with prices starting at CHF 4,500. Each watch will be delivered in a laser-etched Christian Etienne wooden presentation box including a certificate and a one-year warranty. For more information, please check Christian Etienne’s website.