Introducing The Brellum Pandial LE.1 DD Chronometer — A Blue Panda That You Can Even Take Swimming

I’ve always been a fan of panda-dial chronographs. Although I’ve never actually owned one, whenever there’s one in the office, it immediately grabs my attention. And that’s exactly the case here as well with the all-new Brellum Pandial LE.1 DD Chronometer. One reason is that it uses blue instead of black to contrast with the silvery-white dial. And if you know me, you know I love blue! Let’s take a closer look at this hot new release from the independent Swiss family-owned brand. You’ll see that it packs an impressive amount of heritage and value for a surprisingly modest price.

I wasn’t actually all too familiar with Brellum’s offerings, but Nacho has done some coverage of the brand’s more recent releases. If you haven’t already, check out his articles on the Wyvern GMT and the Pilot Power Reserve. He was quite lyrical about what he saw, mostly because they’re well-thought-out pieces that can certainly compete with watches at a much higher price point. The Pandial LE.1 DD Chronometer we’re looking at today is not an entirely new model. It’s the third iteration next to a mainly blue and mainly black version. But, other than the different use of colors, there are a few other updates to mention as well. 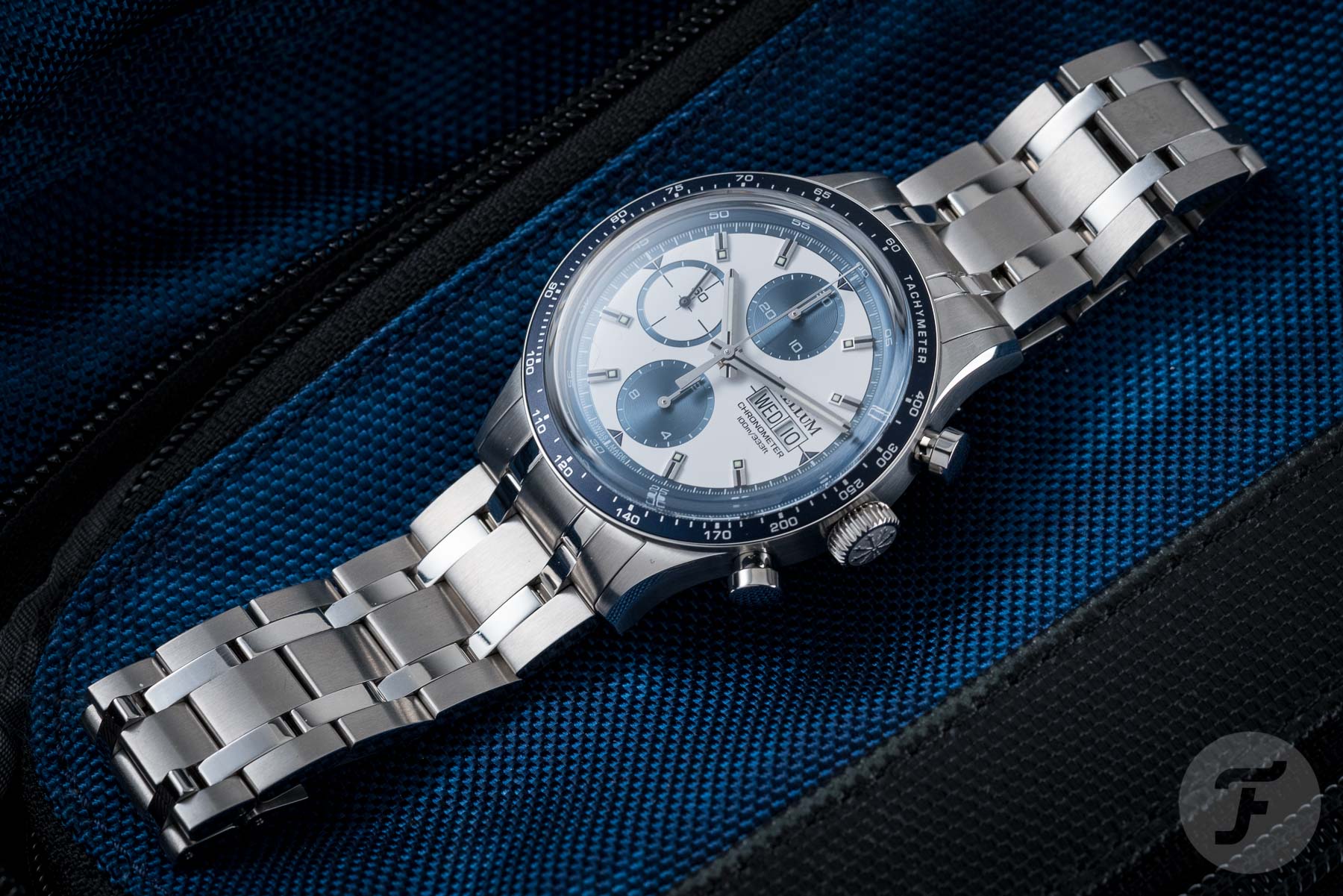 Let’s go over the basics first. This Brellum Pandial LE.1, just like the other two versions, measures 43mm in diameter, 15.9mm thick (11.7mm without both boxed sapphire crystals), and 52mm from lug to lug. At the moment, it seems that the Brellum website has smaller dimensions listed for this watch. I measured it myself, however, and the ones listed here in this article are what I got. For me, with my 17cm wrist circumference, this is certainly a big boy. I do think, however, that everything is well proportioned. That’s why it doesn’t feel as big as the specs would indicate. The lugs look slimmer because of the polished chamfers, and they curve down nicely to hug your wrist.

The rest of the case is brushed, and the bracelet echoes its finishing with a combination of brushed and high-polished links. It starts at 22mm wide at the case, tapering down to 20mm at the milled clasp. There is no micro-adjustment, but you will get four half links so you can size it to your wrist properly. When you look at the watch from the side, you can clearly see the boxed sapphire crystals sandwiching the slimmer case profile. I don’t think I’ve personally ever seen a boxed sapphire crystal on a case back before. On this watch, it works very well with the rest of the design, and it actually sits nicely on the wrist. 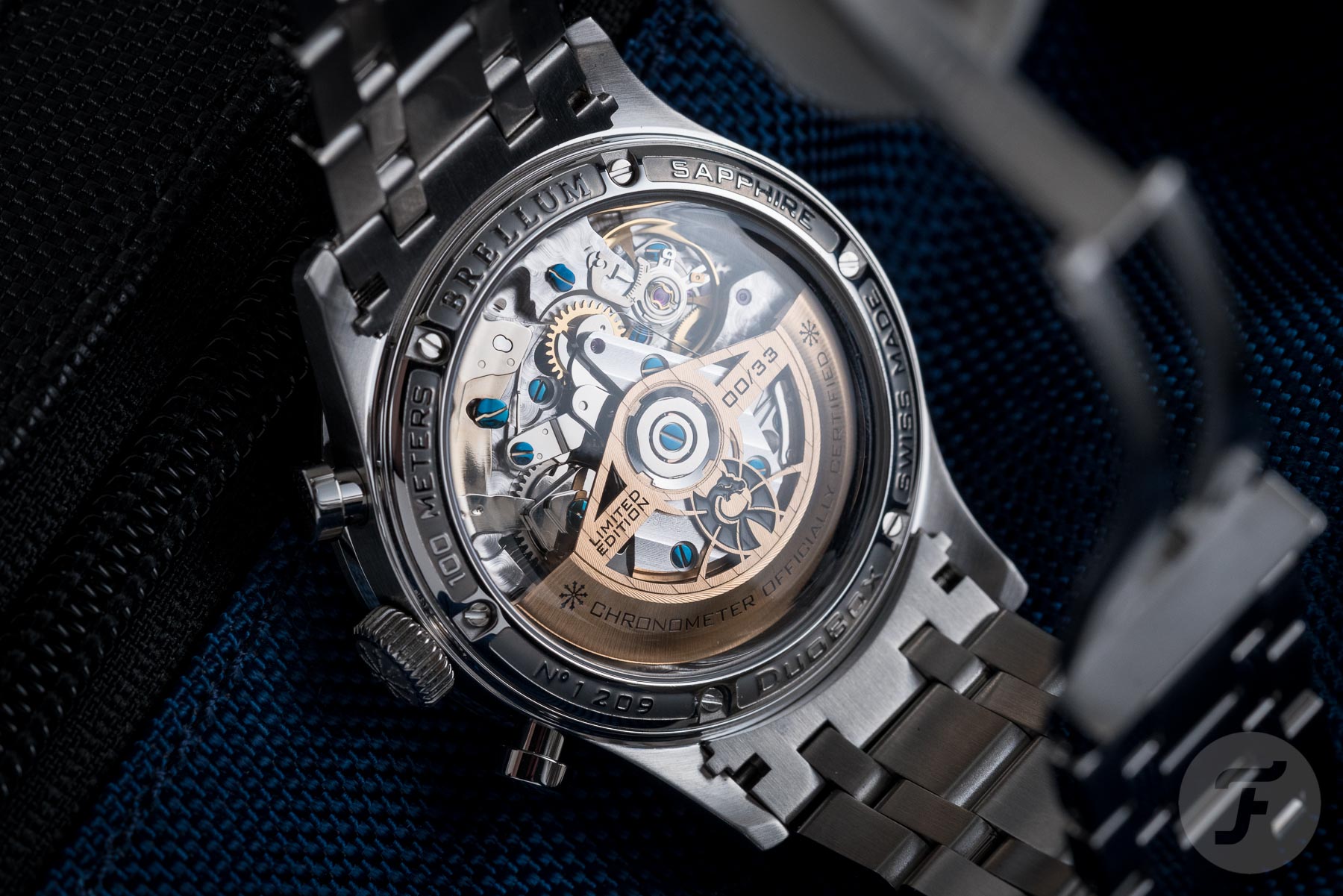 Now that is one classy panda!

A white dial almost always makes a watch look bigger than it actually is. But on the Pandial LE.1, the blue minute track around the dial kind of tricks your brain. That’s why I was surprised to read that this was a 43mm watch. Brellum calls it a silver-white dial, but in real life, it looks more white than silver. The blue shade that’s used for the bezel and accents on the dial has a very grayish undertone. The color of the tachymeter bezel actually reminds me of the color used on the Tudor Black Bay Fifty-Eight in blue. The sub-dials feature a sunburst effect that makes them appear quite prominent. But because of the tone of blue that is used, they don’t look too over the top. What I really want to say is that it’s a very nice and classy-looking shade of blue. In contrast, the blue used on the Norqain Freedom 60 Chrono, for example, is a lot more flashy and sporty looking.

Whereas other Brellum chronographs feature the date at six o’clock, on the Pandial LE.1, it has moved to the three-o’clock position. There, it sits next to an additional day indicator with the brand’s logo and basic specs flanking them both. I think this was a good stylistic choice. It makes the dial look more organized, and besides, you can actually keep up with what day it is. The dial also features diamond-cut hour markers with tiny squares of Super-LumiNova. Now, let’s move on to what’s ticking inside the Pandial LE.1. 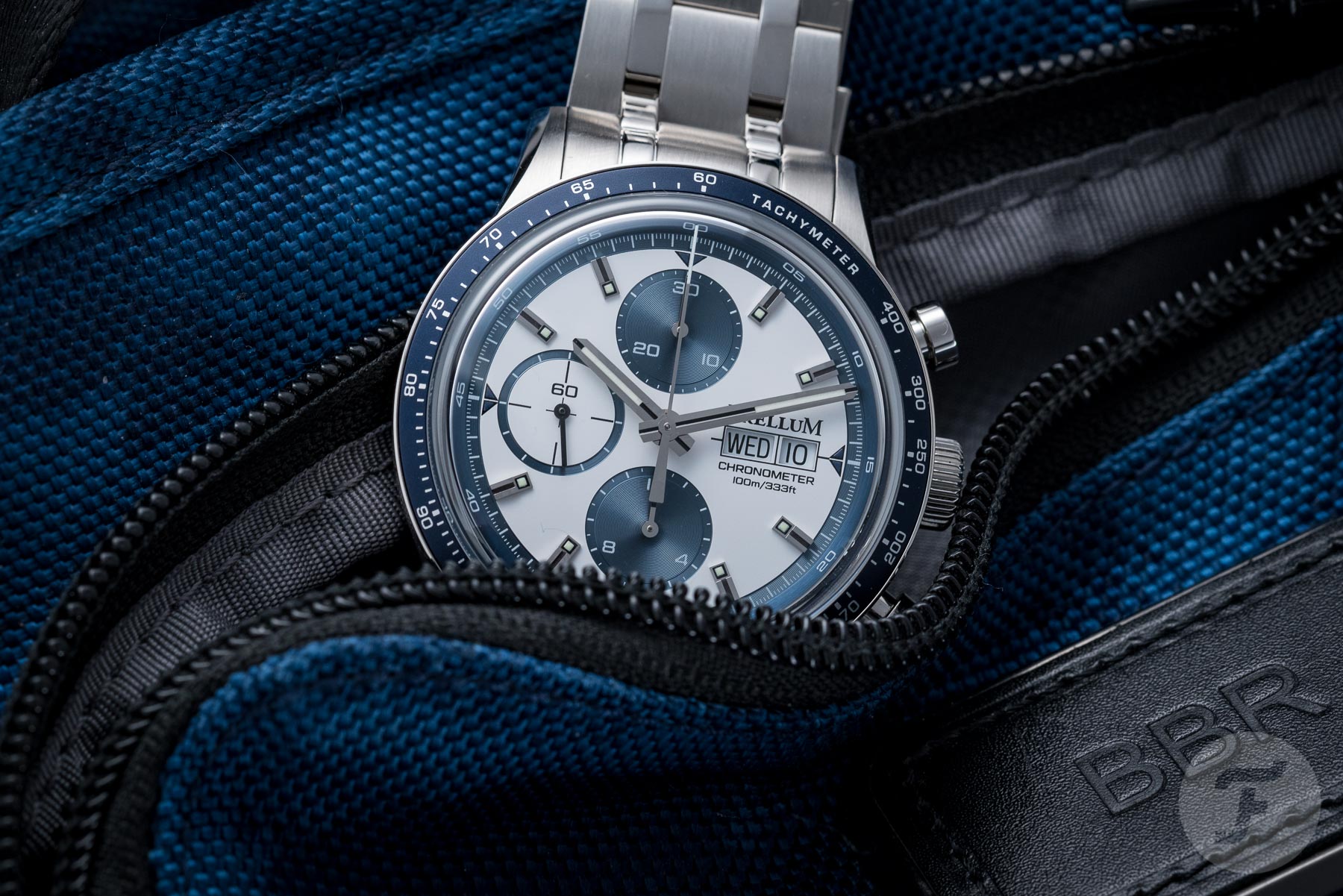 High-end finishing you can even swim with

Through the boxed sapphire case back, you can see the beautifully finished BR-750-2 automatic movement. In essence, this is a trusty ETA 7750 that has been regulated to COSC standards. As such, the word “Chronometer” has also been proudly added to the name, the dial, and the winding rotor of the watch. The movement uses 25 jewels, runs at 4Hz, and has a power reserve of 46 hours. It has been finished with perlage and Geneva stripes, and the blued screws really jump at you when you look at it. And if that’s not enough to catch your attention, then the gold-plated rotor with the integrated Brellum logo certainly will. But when I looked at the case back, another thing other than the movement jumped out at me.

Next to the other features, which are mentioned on the case back, it also says “100 meters”. That’s right, Brellum says it has tested the Pandial LE.1’s water resistance and assures you that the watch is completely safe to take swimming. Neither the pushers nor the crown has a screw-down mechanism, so personally, I’d still be extremely careful. But, in theory, you could put this chronograph on your wrist and never take it off again without having to worry about it. Well, that is until its next service, of course. 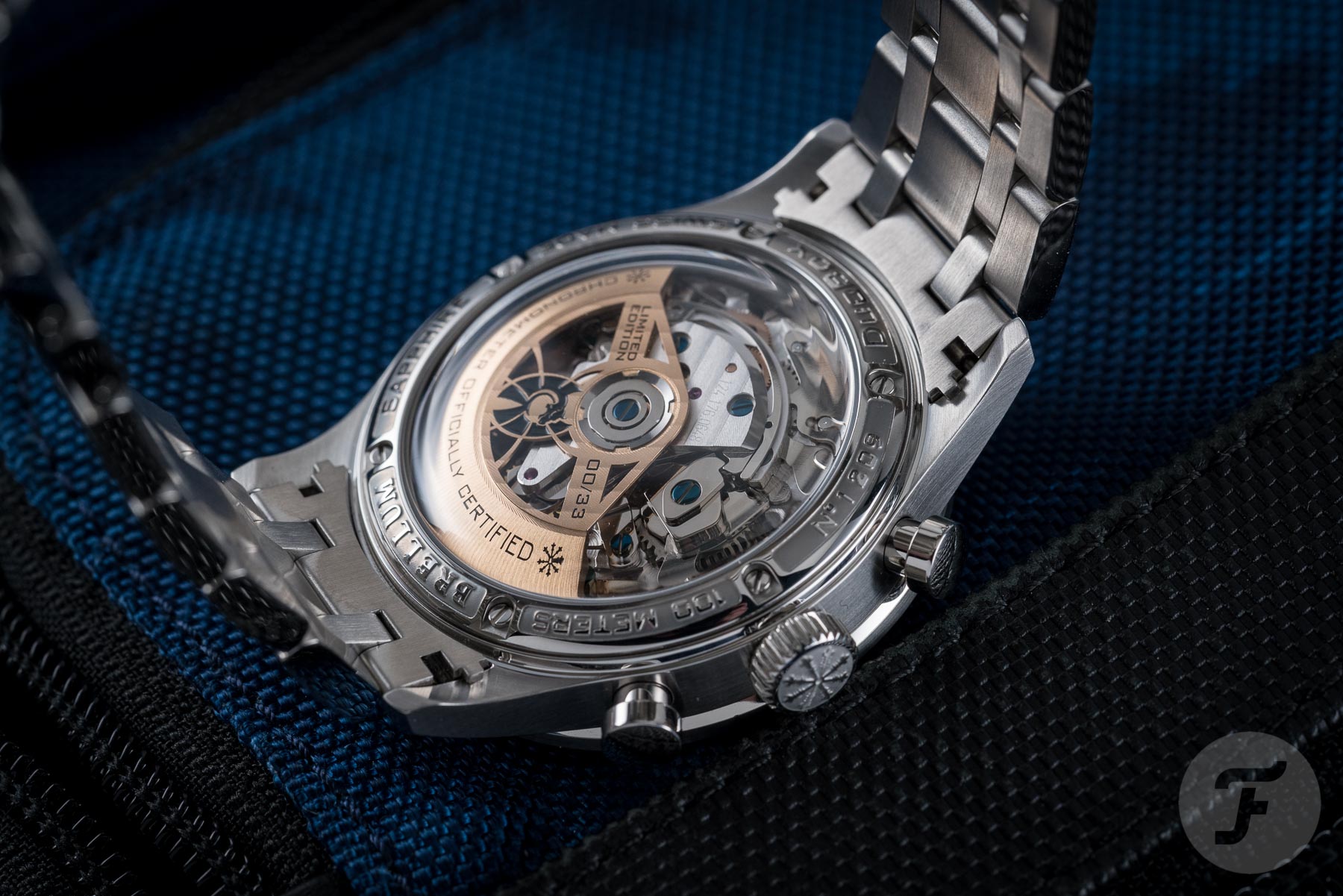 As I said before, I wasn’t all that familiar with Brellum previously. From what I’ve seen, though, the brand offers a very compelling package, especially when you take the price into account. The Pandial LE.1 DD Chronometer is limited to 33 pieces and will sell for CHF 2,750 (excluding taxes). You can choose to get it on either the stainless steel bracelet or a Nebur Tec sailcloth-style fitted strap. But think about it — a chronometer-certified chronograph with a well-finished and renowned movement and a water resistance of 100 meters. That’s very impressive at that price for such a small brand. For me, the relatively big size will still be a deal-breaker, but as soon as Brellum starts making a watch below the 40mm mark, I’ll certainly take it into consideration!

What about you? Were you already familiar with Brellum? And what do you think of the brand’s watches, such as this new Pandial LE.1? Let me know in the comments!