To state that “Omega did a thing” would not come close to doing these two new watches justice. But Omega most certainly did something big here indeed. Today, we see the fruits of the brand’s Project Colibri with the introduction of two watches that share the same brand-new movement. An extraordinary, complicated movement, in fact, with a development time of no less than six years. It’s time for you to meet the new Speedmaster Chrono Chime and the Olympic 1932 Chrono Chime. 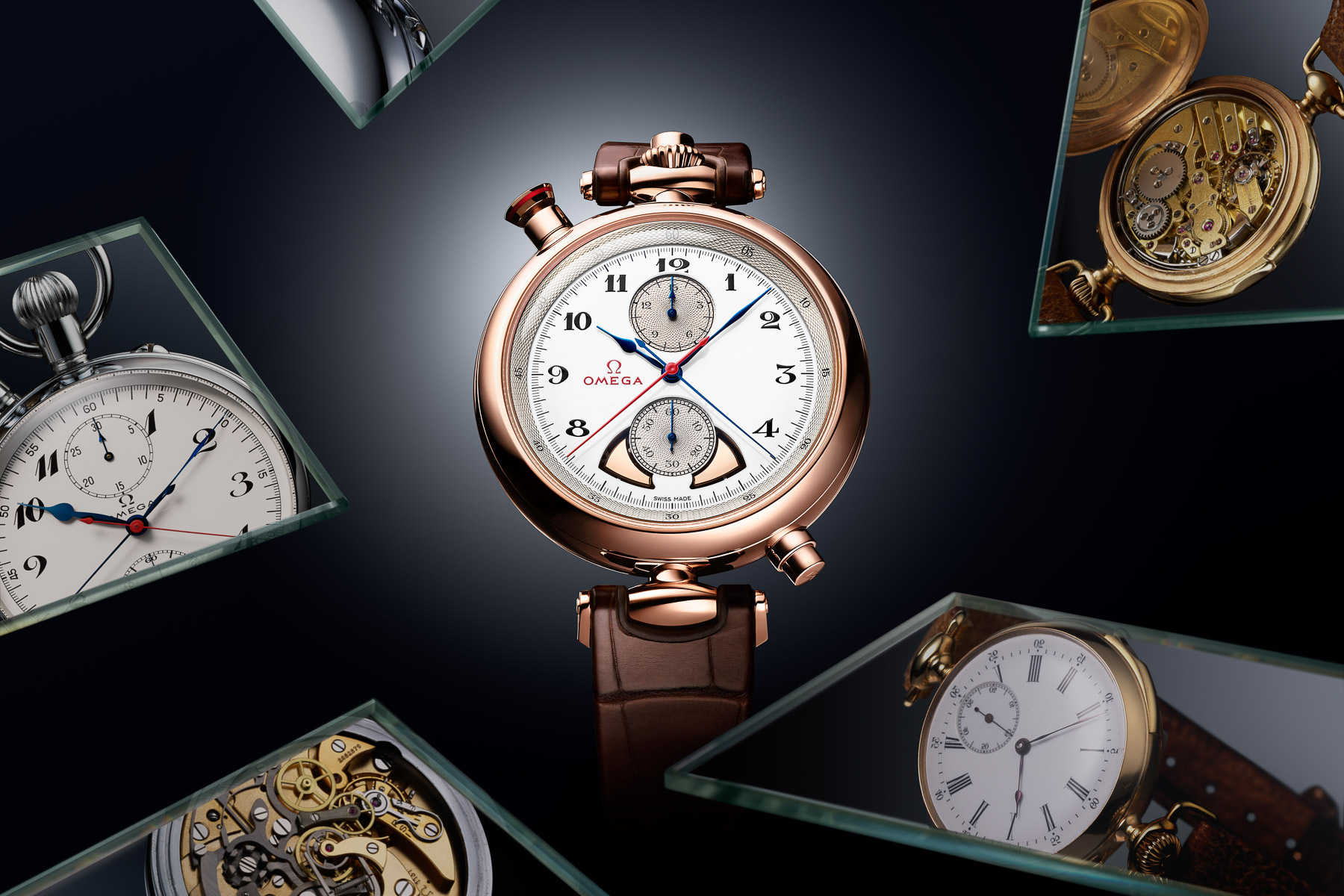 In 1892, Omega released the first minute repeater for the wrist. Up until then, minute repeaters were only available as pocket watches. For this occasion, Omega created a miniaturized version of an existing pocket watch movement with minute repeater complication. But there’s more. As some of you know, Omega wasn’t the brand’s name in those early years. The watch company was known as Louis Brandt & Fils, which started in 1848. However, in 1894 the Brandt brothers created a new movement that set a new standard for watchmaking. It was extremely accurate, and winding and time-setting could be done with the same crown (which wasn’t very common then). Not only that but it was also constructed in such a way that components could be replaced without any necessary modification (by any watchmaker).

This 19-ligne caliber was so good that the Brandt brothers called it the “OMEGA,” meaning the ultimate accomplishment. Based on the success of their “OMEGA” caliber, the company went on as Omega Watch Co. 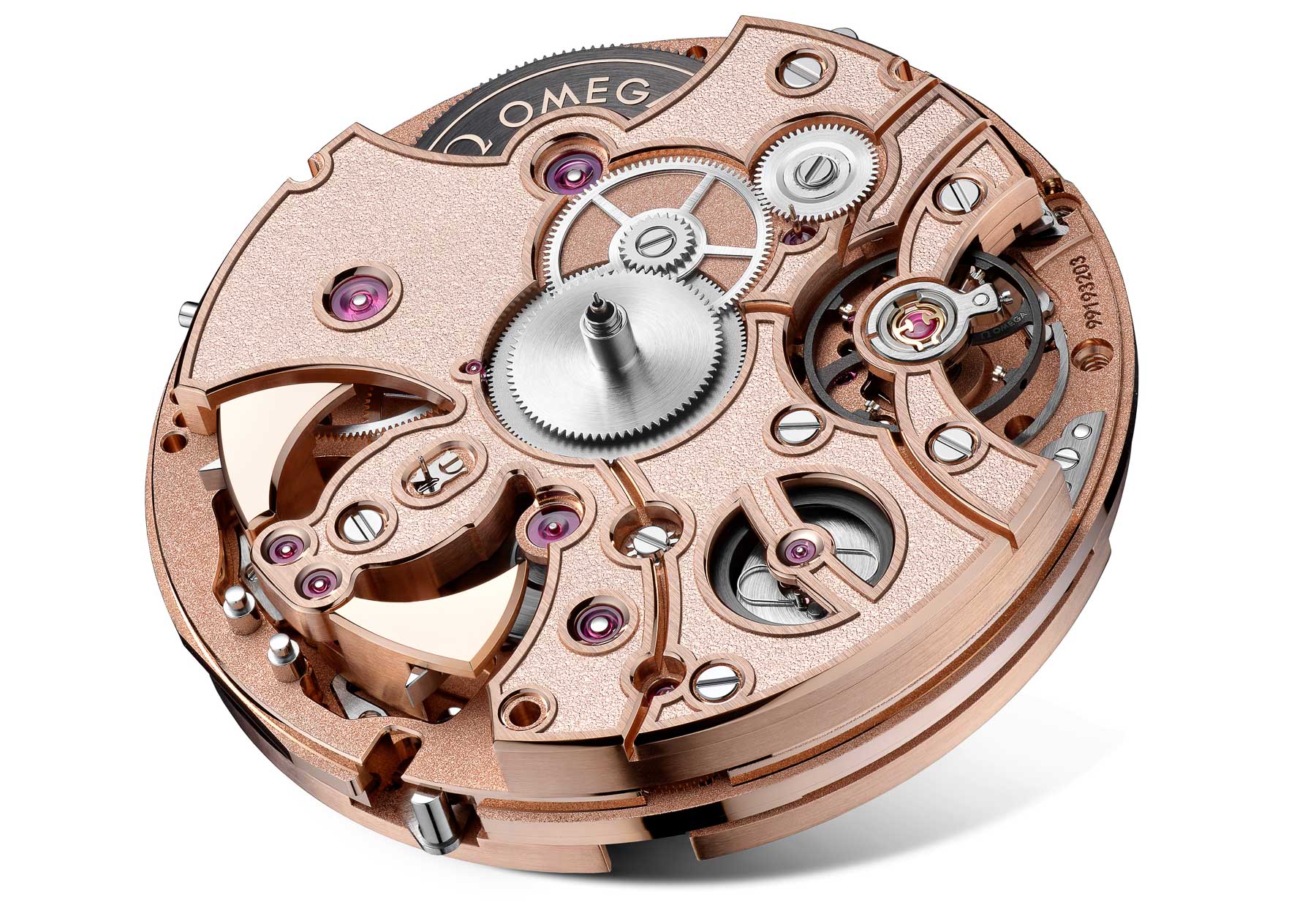 Why this history class? Well, today’s introduction can be seen as an ode to the core of the company, creating incredible movements. Omega has been developing movements for an incredibly long time, with an interruption from the 1970s till 2007, when the brand introduced its in-house-developed caliber 8500. But previously, in 1999, Omega had adopted the Co-Axial escapement invented by George Daniels in its ébauche movements. Today, the majority of Omega watches have in-house movements. However, except for the chronographs and Aqua Terra Worldtimer, there aren’t many complications in the collection (if we exclude the tourbillon as a complication). Without getting all too hung up on definitions, there are no big complications in Omega’s catalog. Instead, Omega mainly aims to create highly accurate watches for daily use, using innovative solutions to fight magnetism, shocks, wear and tear, and so on. 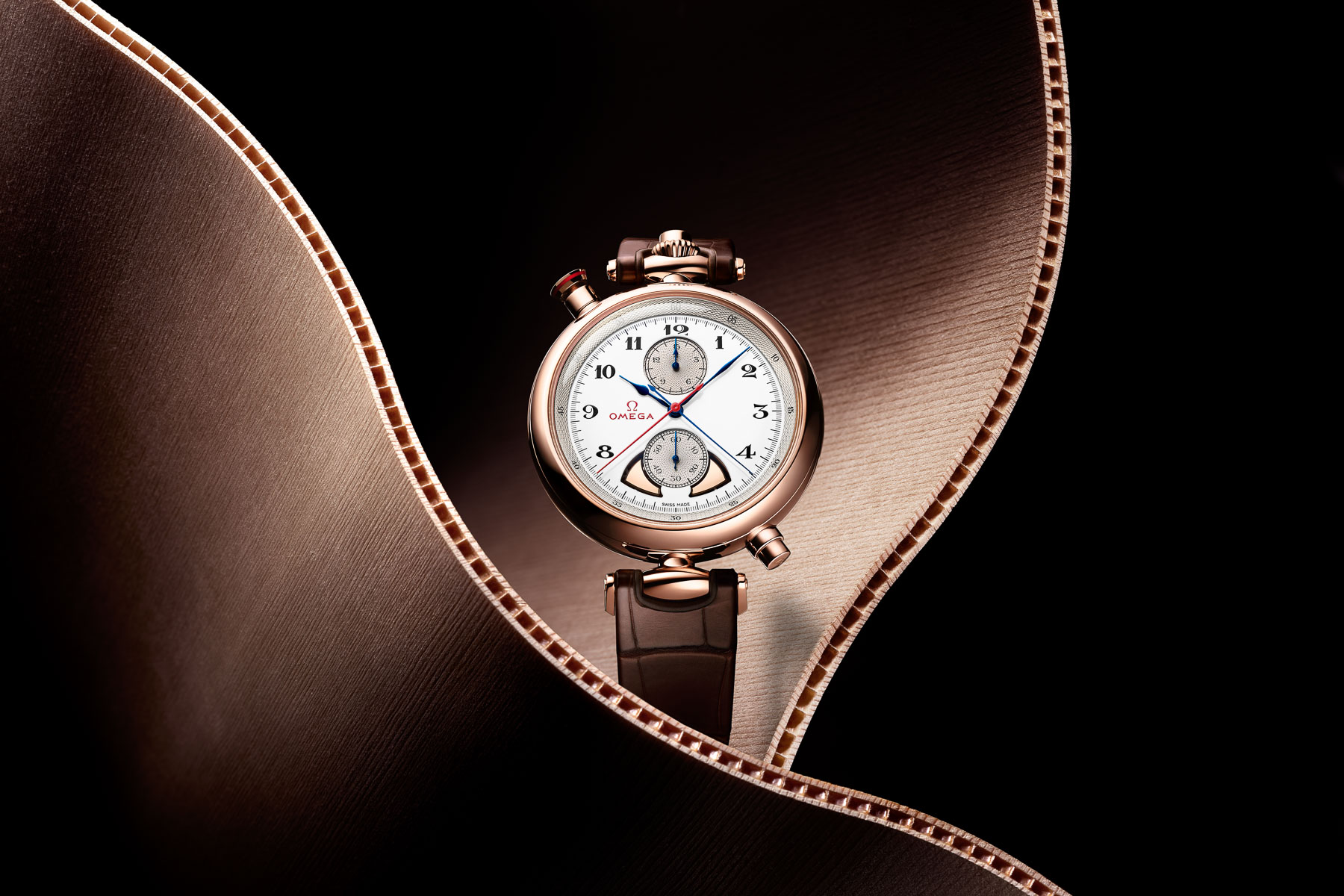 That changes today. Two watches, each with a special reason, are powered by Omega’s caliber 1932. This movement is a  nod to the pocket watch chronographs that were used during the 1932 Olympic Games in Los Angeles (and guess where I am today to witness the introduction of these watches!). But what makes it so special? Why did I mention the 1892 minute repeater? Well, the Speedmaster Chrono Chime and Olympic 1932 Chrono Chime watches are not only chronographs but they also chime the elapsed time! That’s right. Let that sink in… These are not minute repeaters, but instead, they chime the time you measured with the chronograph function. Caliber 1932 is by far the most complicated movement Omega has made, and it was developed from scratch.

The rattrapante (split-timer) is operated with the special pusher (at 2 o’clock for the Speedmaster and 11 o’clock for the Olympic 1932), while the mono-pusher chronograph is operated via the pusher on the crown. The chime pusher is at 5 o’clock on the Olympic 1932 Chrono Chime and 8 o’clock on the Speedmaster Chrono Chime. The pusher for chiming the elapsed time has an embossed music note. When the chime pusher is activated, the hammers will hit the gold gongs and will chime the elapsed tens of minutes, and finally, the seconds. The creation of these watches and caliber 1932 resulted in no less than 17 patents. 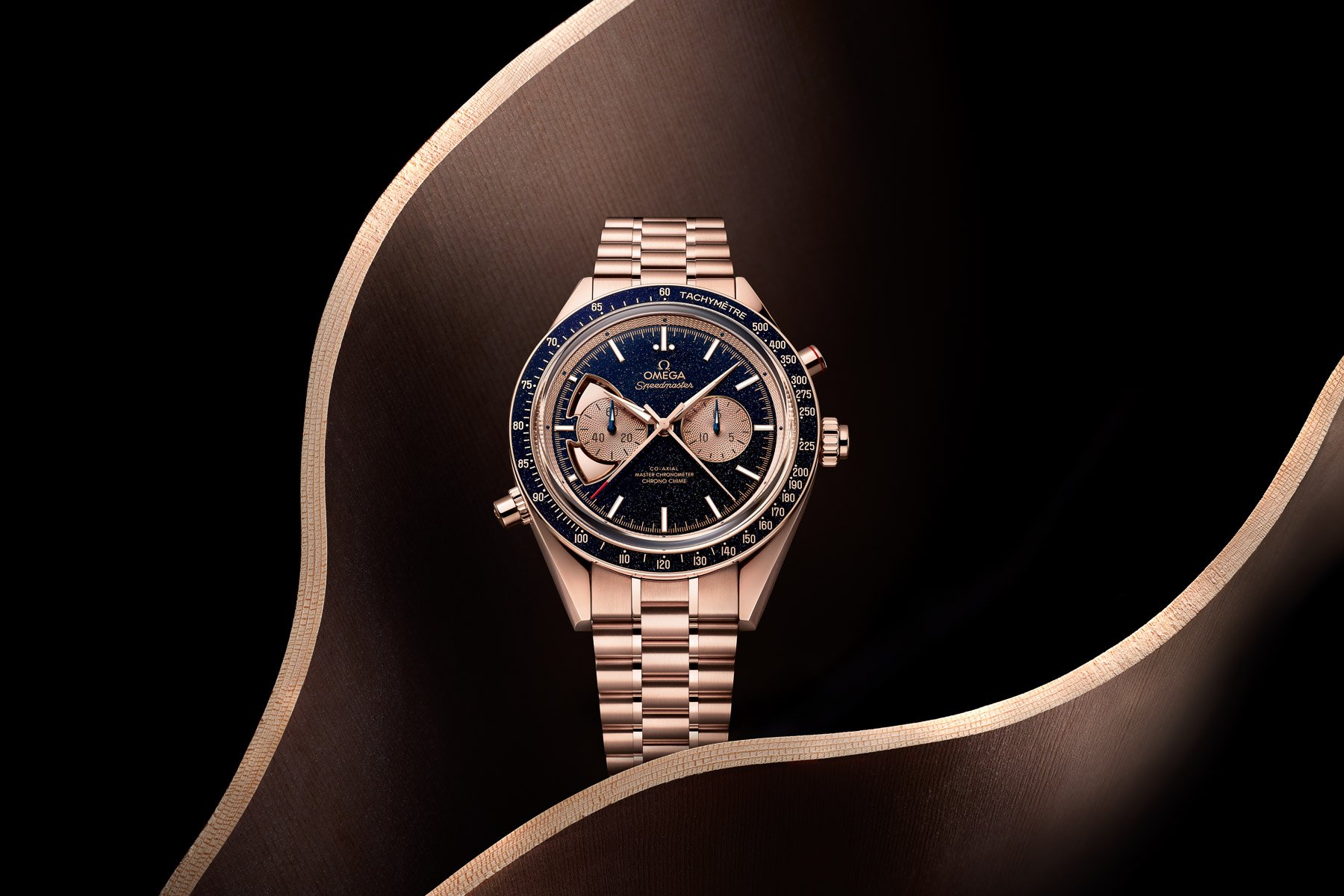 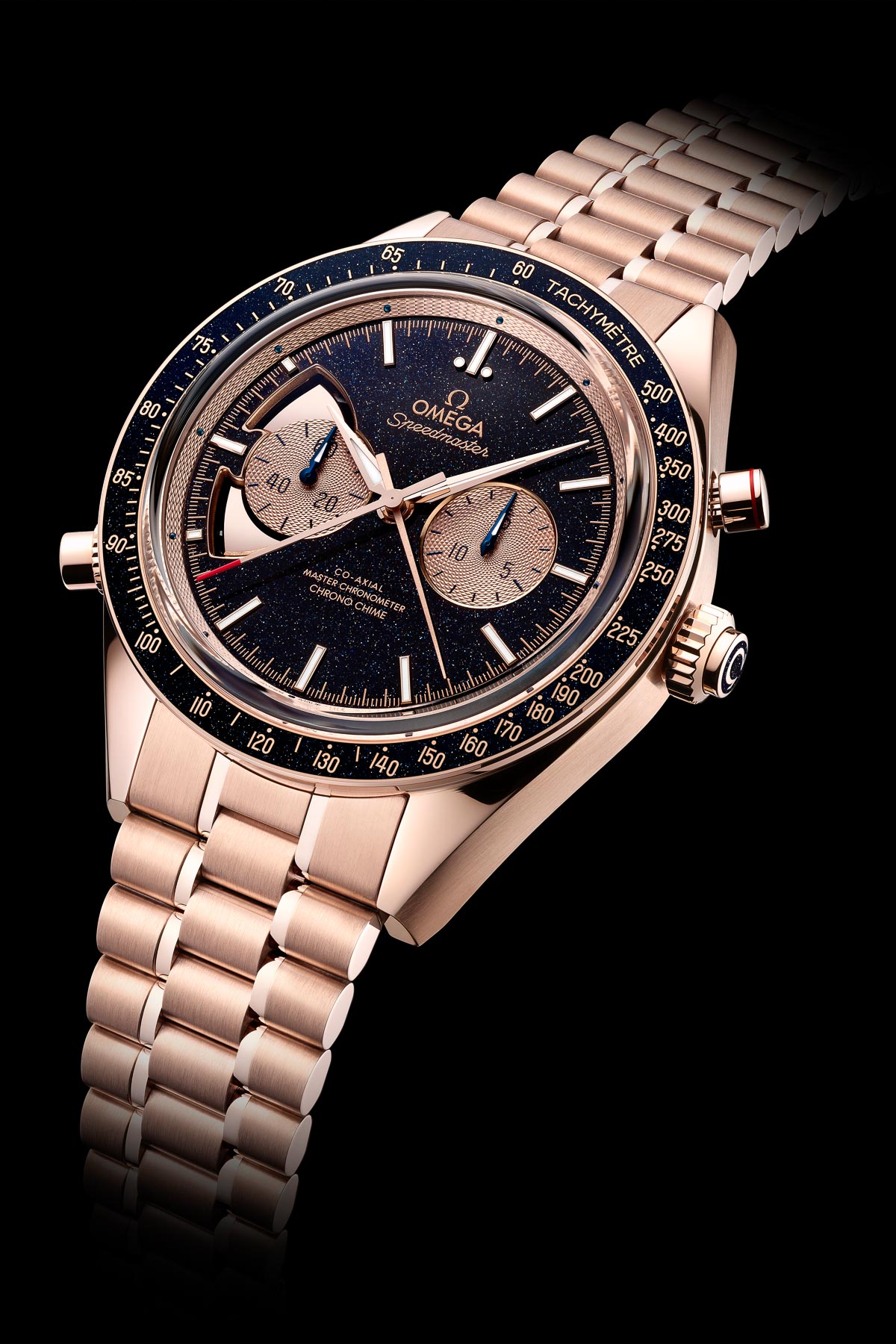 But make no mistake, this watch is big. It must be big for the highly complicated movement with a rattrapante chronograph and chime mechanism. It has a diameter of 45mm, a height of 17.27mm, and a lug-to-lug of 53.3mm. Another important thing to mention is the weight of the Speedmaster Chrono Chime. It’s made entirely of 18K Sedna Gold, Omega’s alloy for rose gold. Not only are the case and bracelet made of Sedna Gold, but the movement is also made of this special alloy. It all adds up to a whopping 326.20 grams on the wrist. 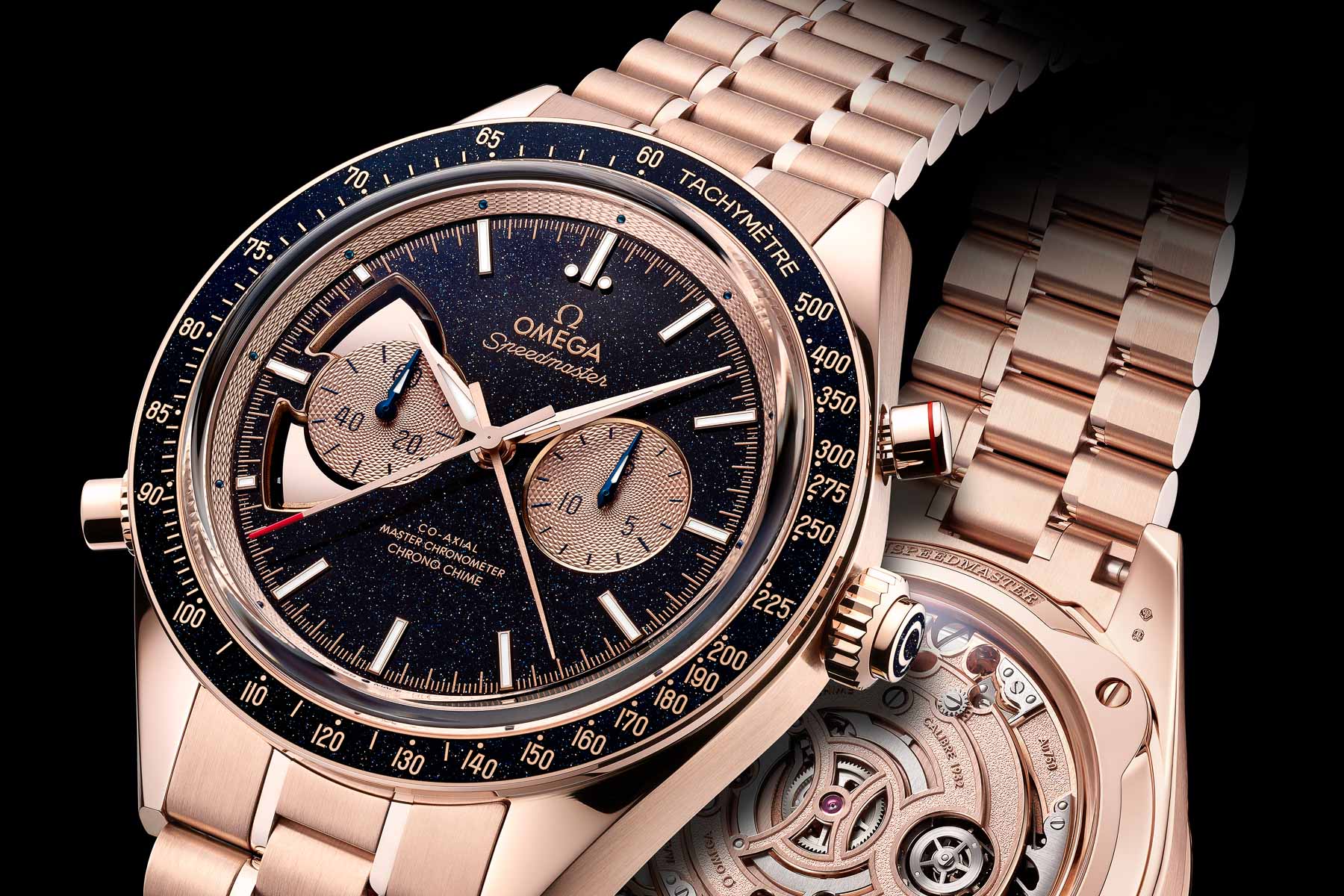 If you take a look at the face of the Omega Speedmaster Chrono Chime, you’ll discover a beautiful blue aventurine Grand Feu enamel dial. If that’s not stunning enough, you will find a Sedna Gold inner bezel and two sub-dials with a guilloché engraving. The alpha-shaped hour and minute hands are made of polished Sedna Gold, and the same applies to the hour markers. At 9 o’clock, you will also find the two Sedna Gold hammers visible for the chiming function. The small hands are blued and the chronograph and split-seconds hand are PVD Sedna Gold (not solid gold, which would’ve been too heavy for the chronograph mechanism). The split-seconds hand has a red tip. 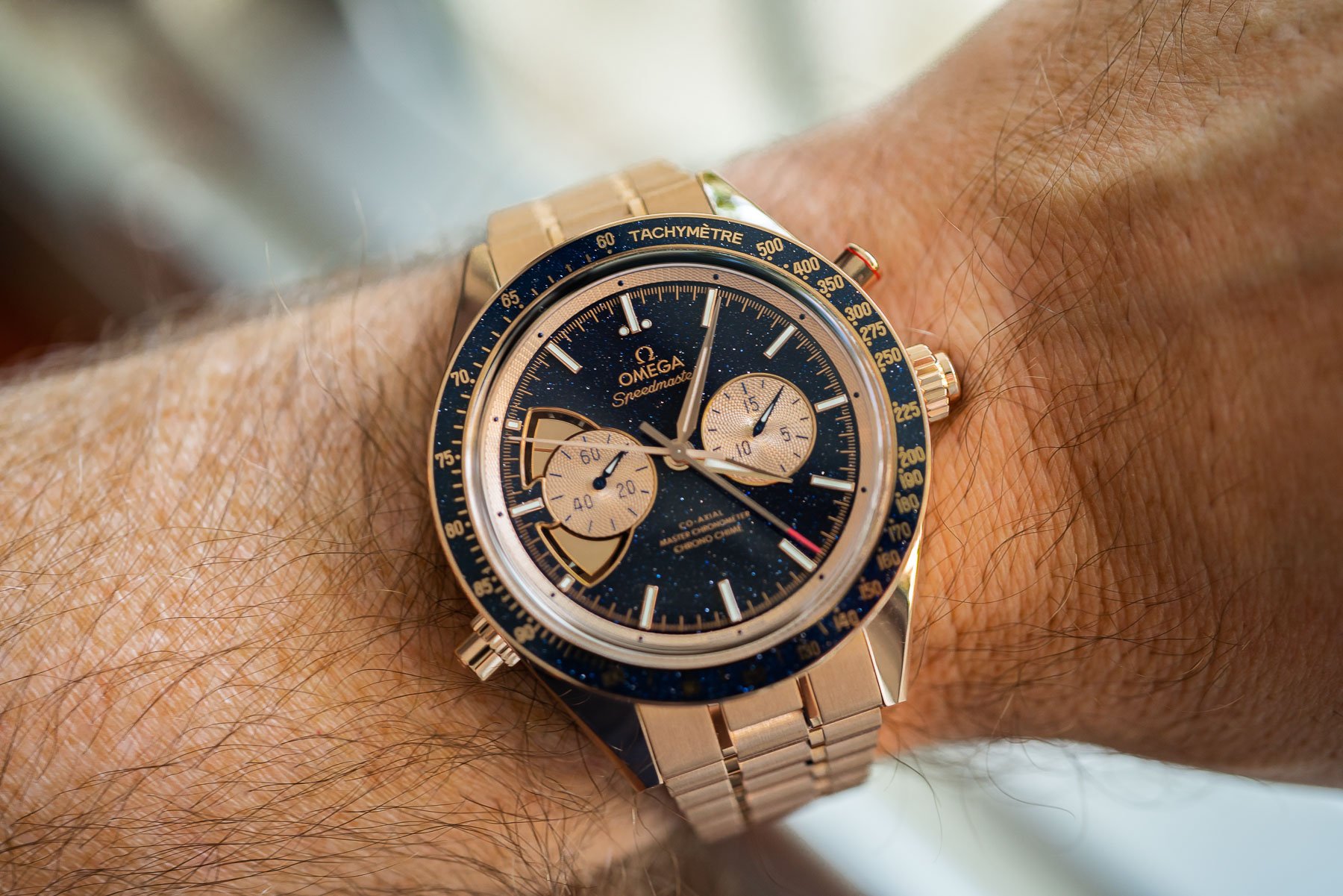 All hour markers and four hands have been given a treatment of Super-LumiNova, which emits a green glow. As you can see, the 18K Sedna Gold bezel is filled in with blue aventurine enamel. Turn the watch around, and you have a perfect view of the beautiful Sedna Gold caliber 1932. The case back is screwed onto the case and is engraved with “Numbered Edition” and the actual number of the watch.

The bracelet of the Speedmaster Chrono Chime should look familiar to you, as it’s based on the ones used for the current Speedmaster collection. It tapers from 21mm between the lugs to 16mm at the clasp. It features the patented comfort-release adjustment system as well.

The other watch that Omega introduced is the Olympic 1932 Chrono Chime, inspired by the pocket chronographs used to time the events at the 1932 Olympic Games in Los Angeles. Omega couldn’t have thought of a more fitting location for the official introduction of this chiming watch. What’s more, Omega even has Olympic swimmer Michael Phelps on location at the Walt Disney Concert Hall. 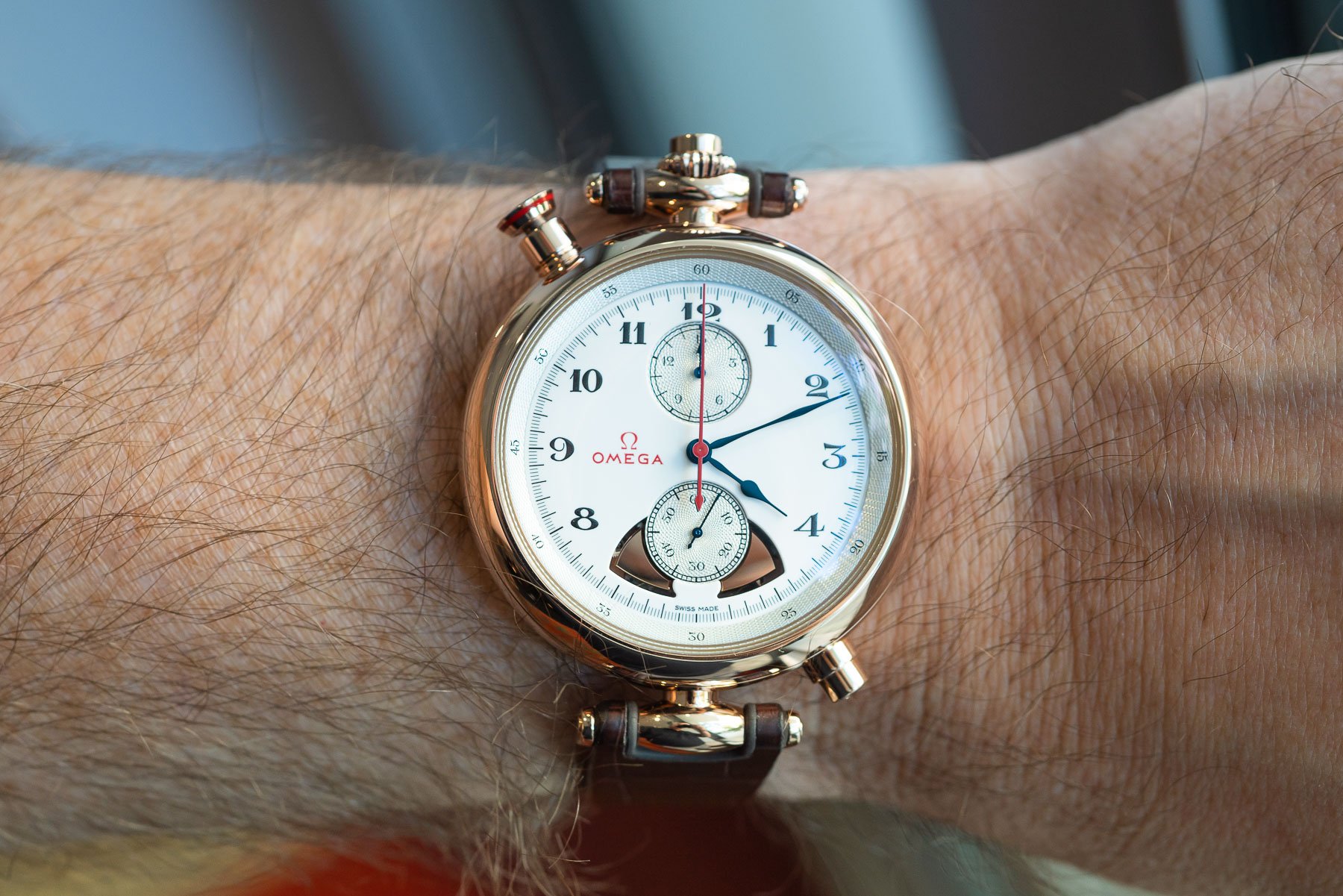 The Olympic 1932 Chrono Chime watch looks like a pocket watch, and it partially is. Using the quick-change system, you can remove the straps and start using the Olympic 1932 as a pocket watch. The watch also comes with a leather cord, enabling you to wear it around your neck like a vintage Olympic stopwatch. 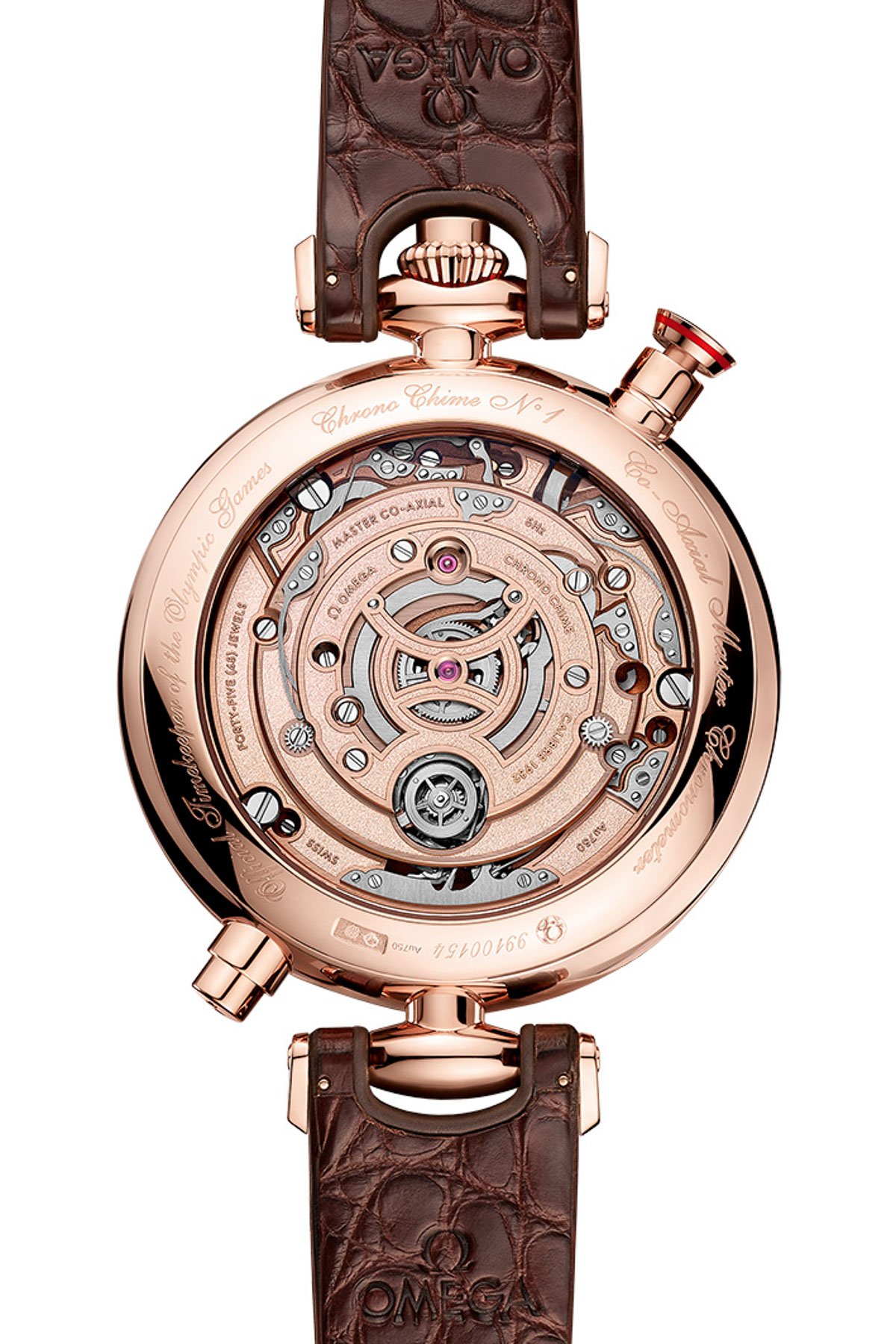 On the dial side, you will find the 925 silver hand-made guilloché inner bezel, as well as on the two sub-dials. The sub-dial at 6 o’clock reveals the two hammers, fitted with an insert of hardened steel to have the best effect when hitting the 18K Sedna Gold gongs. The white gold dial itself has Grand Feu enamel. Also, here you will find the hands for the hours and minutes in 18K Sedna Gold and the counter hands in blue. The central seconds hand is also in blue CVD, and the split-seconds hand is red varnished. All printing on the dial, like the Arabic numerals and minute track, is executed in black Petit Feu enamel, inspired by the 1932 pocket watch for the Olympic Games. The vintage ” Ω ”  and OMEGA wording are done in Petit Feu red enamel. 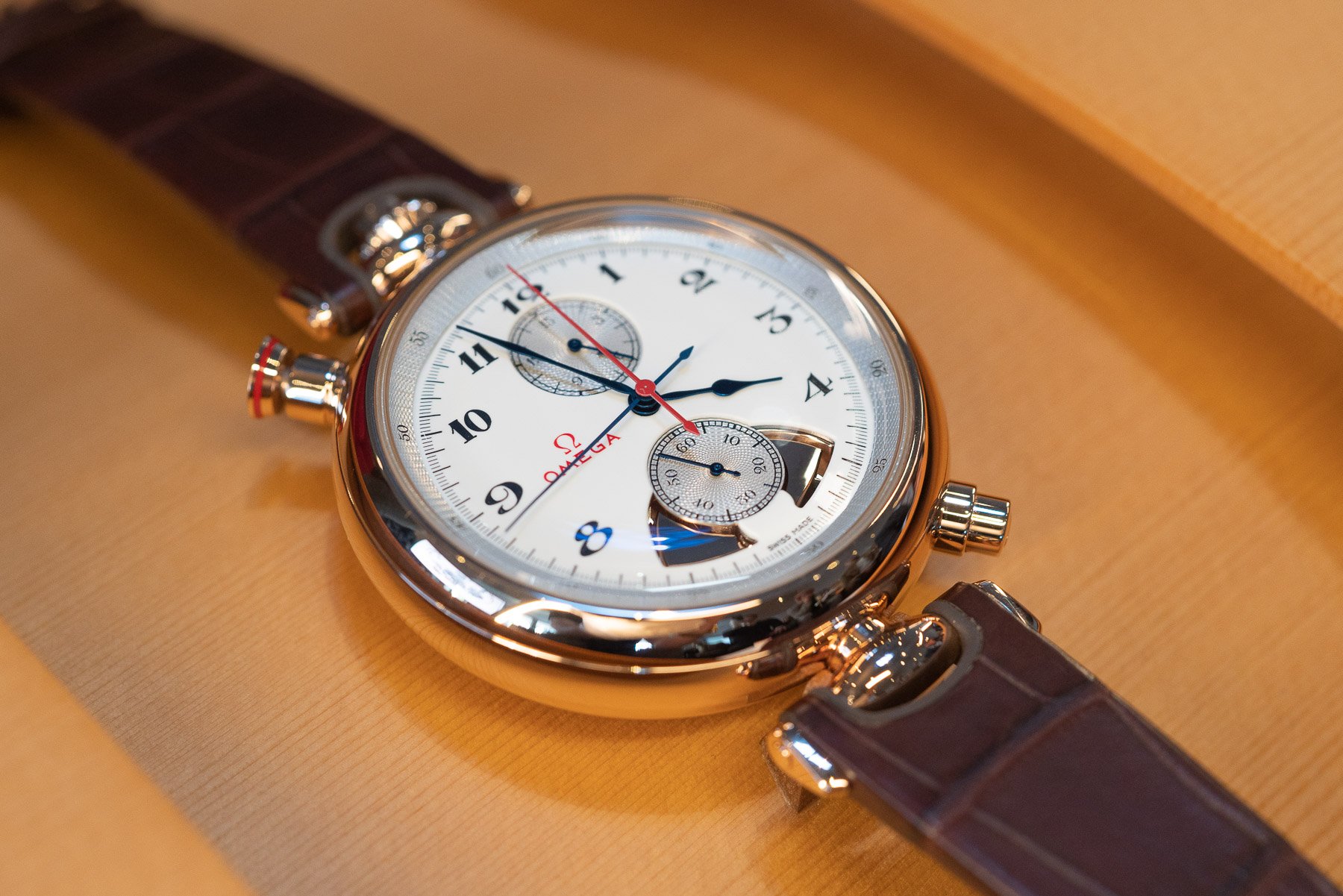 In the special walnut presentation box, there’s the brown leather strap with an 18K Sedna Gold buckle. It tapers from 18mm at the lugs to 16mm at the clasp. Additionally, you’ll find a neck cord with a Sedna Gold attachment (weighing 22.63 grams) to use the watch as a stopwatch. Last but not least, there’s an additional cord to use the Olympic 1932 Chrono Chime as a pocket watch, with a gold attachment that weighs 11.7 grams.

Of course, the biggest achievement of these new Chrono Chime watches is in the movement. Omega developed this caliber 1932 together with sister brand Blancpain, and it took them six years to complete this masterpiece. The movement is completely designed and created from scratch and by hand. Many parts, such as the bridges, plates, and gongs, are all made of 18K Sedna Gold. In total, the movement uses 46.44 grams of gold. VP of Product Gregory Kissling lets us know that gold gives a better (chiming) sound than platinum. Furthermore, the sound of Sedna Gold is again different — and better — than that of other alloys. 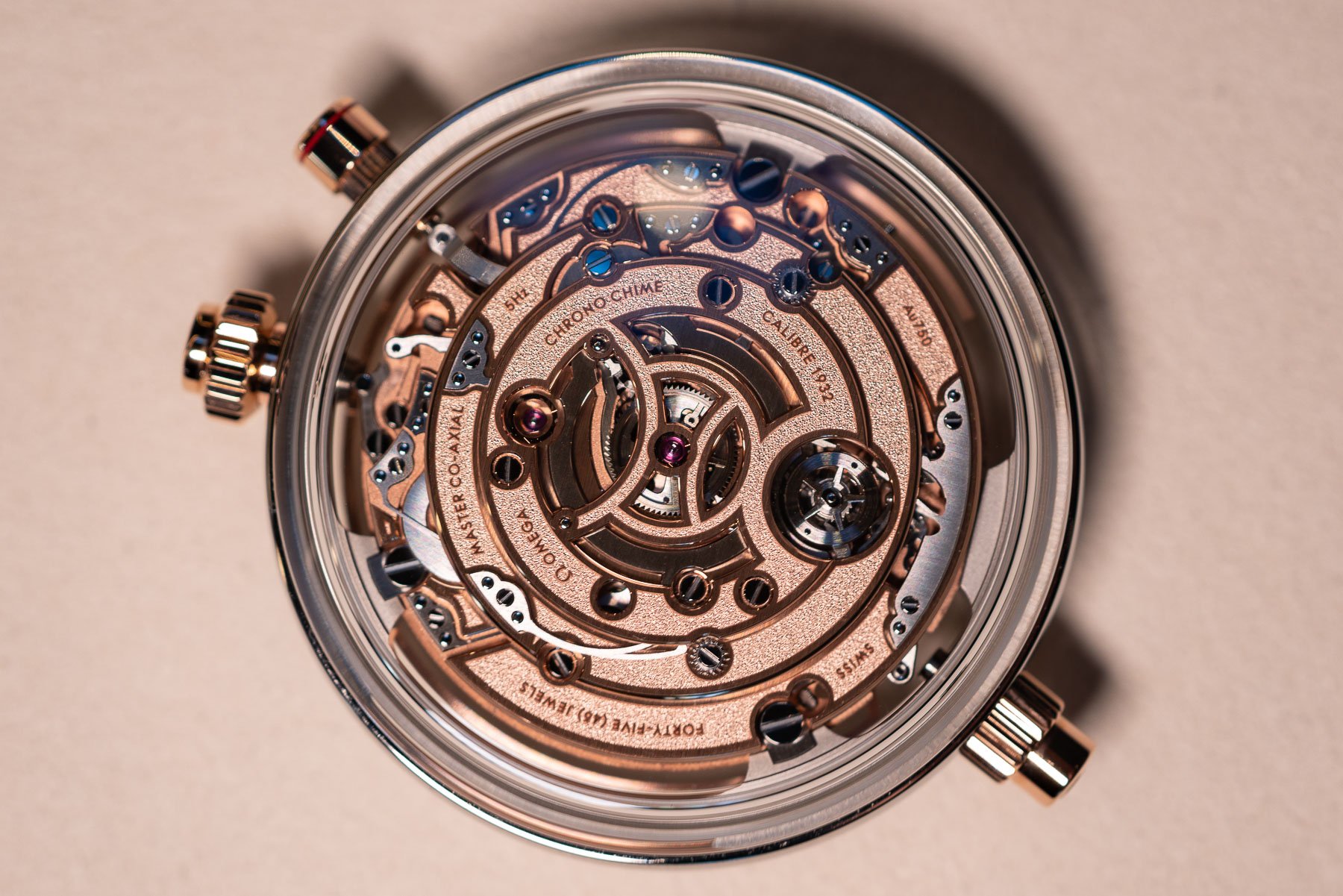 Caliber 1932 is the most complicated movement Omega has ever made. It’s an integrated chronograph and minute repeater, requiring its own mechanical “brain” to merge all these functions flawlessly. One of the first hurdles Omega needed to overcome was integrating the Co-Axial escapement invented by Georges Daniels. This escapement was designed to work with a standard frequency (21,600vph, 28,800vph, and in between), while the Speedmaster Chrono Chime and Olympic Chrono Chime operate at 5Hz to be able to measure (and show) 1/10th of a second. This is the same frequency or ticking speed as the original 1932 Olympic Chronograph.

As for the chime function itself, Omega’s watchmakers had to add three chime cams to the chronograph mechanism, a split-seconds (rattrapante) mechanism, and, on top, mechanisms to prevent mal-manipulation. To make this watch pass the Master Chronometer certification process by METAS, Omega has used 50 non-ferrous components for the movement to ensure it’s resistant to magnetic fields of >15,000 gauss. 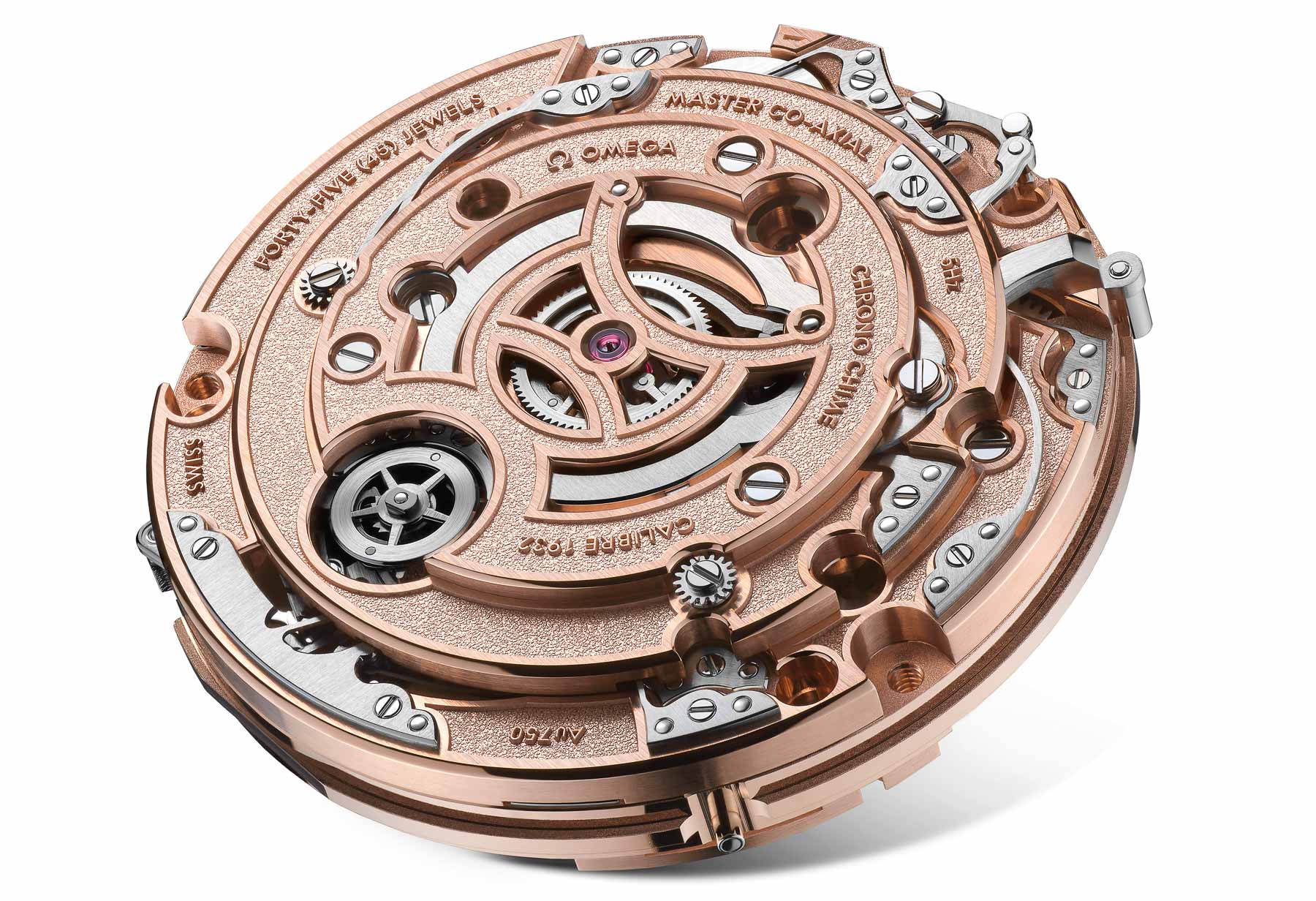 Dimensions of the movement

Furthermore, you will find laser decoration on the mainplate and bridges, hand-polished bevels on the mainplate, bridges, and mechanisms. It also has a free-sprung balance, a Si14 silicon balance spring, and the use of Nivagauss and Nivachoc shock absorber technology. 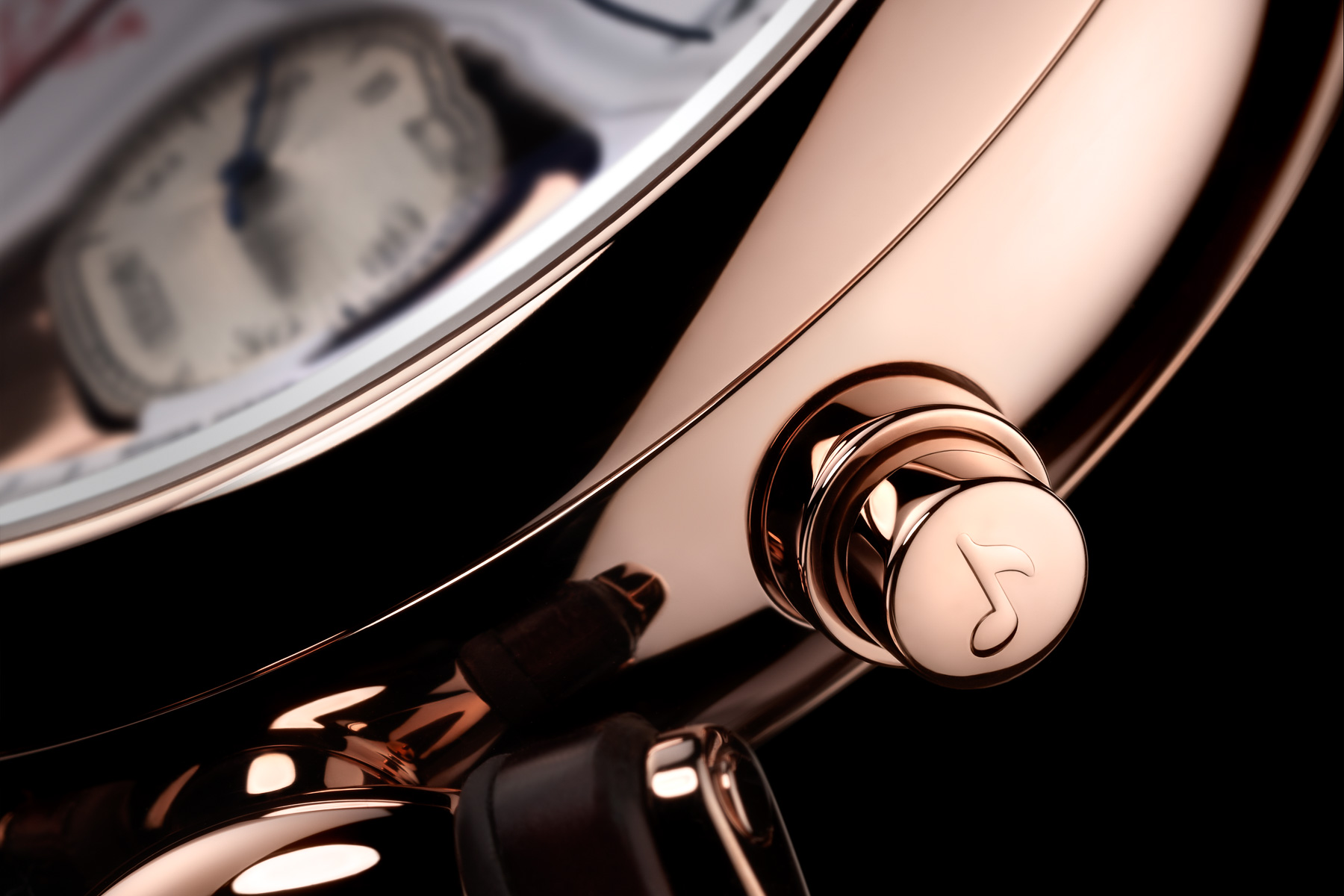 Thirteen patents for the movement

Omega has registered 17 patents for this watch, 13 of which relate to the movement.

Both the Speedmaster Chrono Chime and the Olympic 1932 Chrono Chime come in a walnut presentation box. There’s a resonance plate in spruce, a “Making of” book, and a magnifying glass. The watch also comes with a certificate of authenticity, a Master Chronometer certification card, and a five-year international warranty card.

Some final thoughts on the Chrono Chime watches

Upon seeing this watch, I found it to be simply breathtaking. It’s a testimonial to Omega’s long watchmaking history and demonstrates that the brand’s engineers can create very complicated movements if they want to. It’s a show-off piece in many ways, not only for the customers who want to have something truly special but also for the brand to show its capabilities in making such a complicated movement (and watch).

Omega focuses on good mechanical watches you can wear daily for a lifetime — luxury watches, for sure. But this Speedmaster Chrono Chime and Olympic 1932 Chrono Chime are completely different. They’re not for everyone, and they are also not intended to be for everyone, but they show what Omega can do today in terms of watchmaking skills. It’s on the same level as many prestige brands out there, such as Lange, Patek, AP, Vacheron, and Breguet. However, this needs to be considered as a one-off; it’s not a new direction or strategy for Omega to play in that field. The brand will (and should) continue what it does best — create watches for you and me to enjoy daily. The Speedmaster Chrono Chime and Olympic 1932 Chrono Chime serve as a milestone in Omega’s watchmaking (hi)story.

Omega will travel the world with these new watches to show them during events and exhibitions. Afterward, you can admire them either at the Omega Museum in Biel or the Omega boutique next to it. If you can join one of these events or visit Biel, you should definitely take a look at these two marvels.