One of the rare Speedmaster BA145.022-69 watches given to the astronauts in 1969
Robert-Jan Broer
comments 13
Share

Schirra was the commander of Apollo 7, the command pilot on Gemini 6A, and the only astronaut aboard the Sigma 7 spacecraft in the Mercury-Atlas 8 mission. On the Sigma 7, he wore an Omega Speedmaster reference CK2998-4 chronograph that he had purchased privately. On the other two missions, he wore Speedmasters that NASA had provided to him. For the Gemini 6A mission, he wore a Speedmaster 105.003-64 (NASA serial number 19), and for Apollo 7, he wore the 105.012-65 (NASA serial number 32). 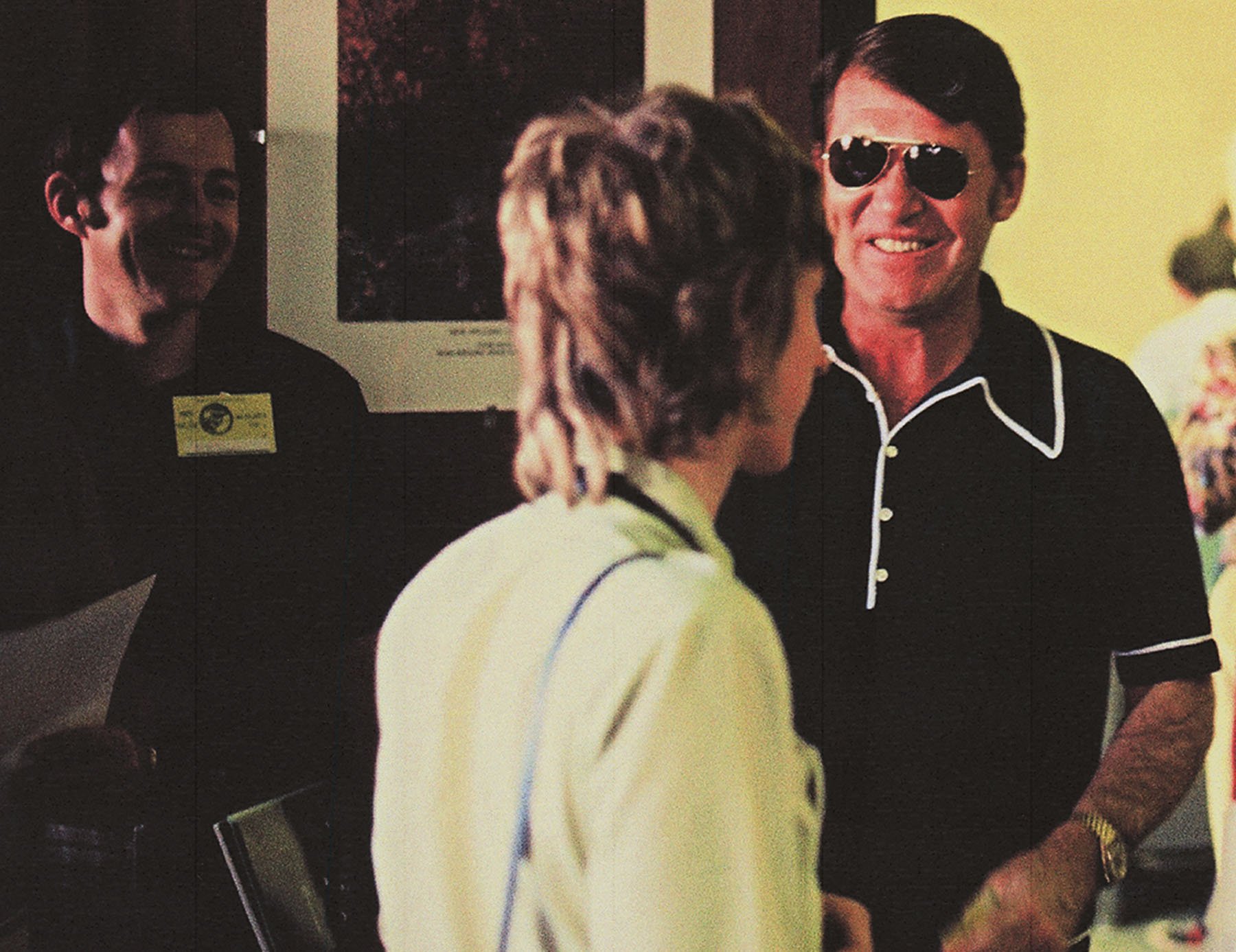 At the banquet on November 25th, 1969, Omega offered the astronauts a special commemorative edition of the Omega Speedmaster Professional in yellow gold. These watches were all individually numbered, and numbers 1 and 2 were offered to President Nixon and Vice President Agnew. Both had to decline due to the value of the gift, but the 23 astronauts at the dinner accepted the burgundy-bezel Speedmaster Professional watches. 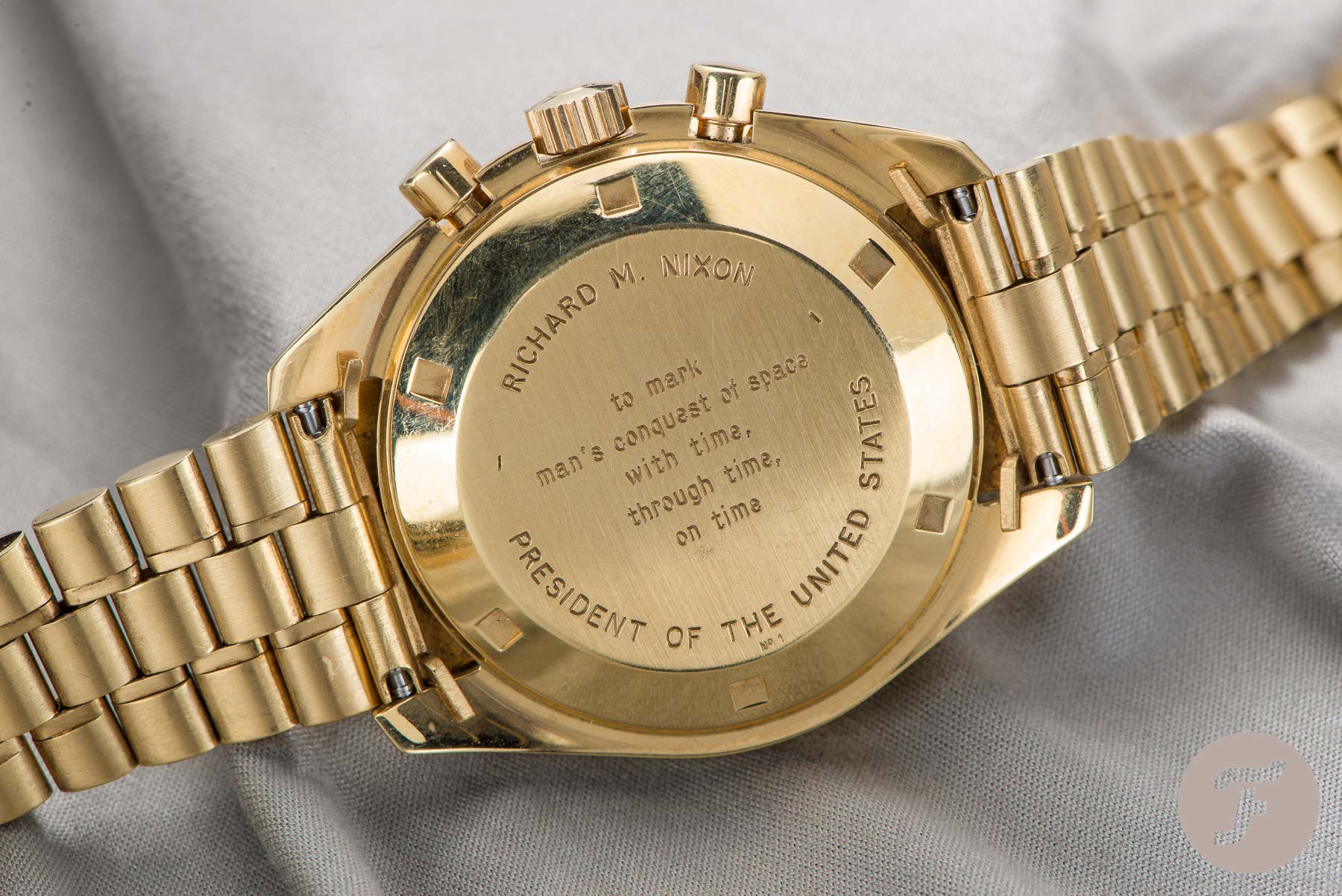 Omega offered three additional watches to the families of the Apollo 1 astronauts who died in a terrible accident during a launch rehearsal test. This meant that numbers 3 to 28 were allocated to the astronauts. Later, in 1972 and 1973, eight more NASA astronauts received the gold Omega Speedmaster Professional BA145.022-69 watches. These examples carried numbers 1001 through 1008 and the same commemorative text as the first 26 watches for the astronauts. 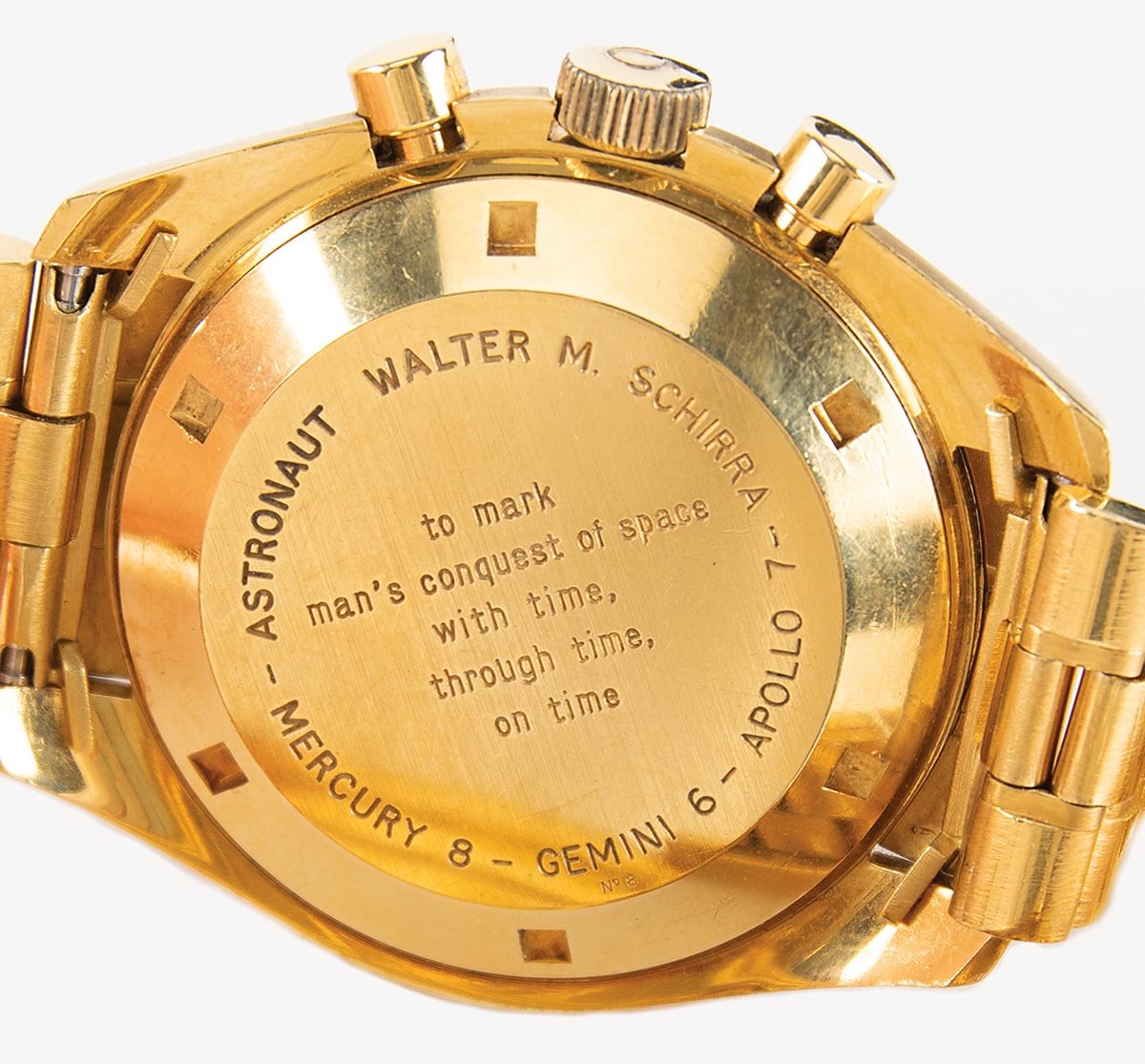 In total, Omega produced 1,014 pieces of this watch from 1969 onwards. Unlike today when these watches would sell out in a flash (and did in 2019), the gold BA145.022-69 was in Omega’s collection for several years. It was an 18K gold version of the regular Speedmaster Professional with the hand-wound caliber 861. Instead of a standard black dial with white pencil hands, this commemorative watch has a solid gold dial with black onyx hour markers and black pencil hands. The bracelet was also slightly different from the regular bracelet in steel, tapering to just 14mm at the clasp.

I’ve seen many of these gold Speedmaster Apollo XI “Tribute to Astronauts” models, including those for President Nixon and some of the NASA astronauts. They always impressed me and made me think of that evening at the Warwick Hotel when Omega presented them to the astronauts. That must have been an incredibly special moment. 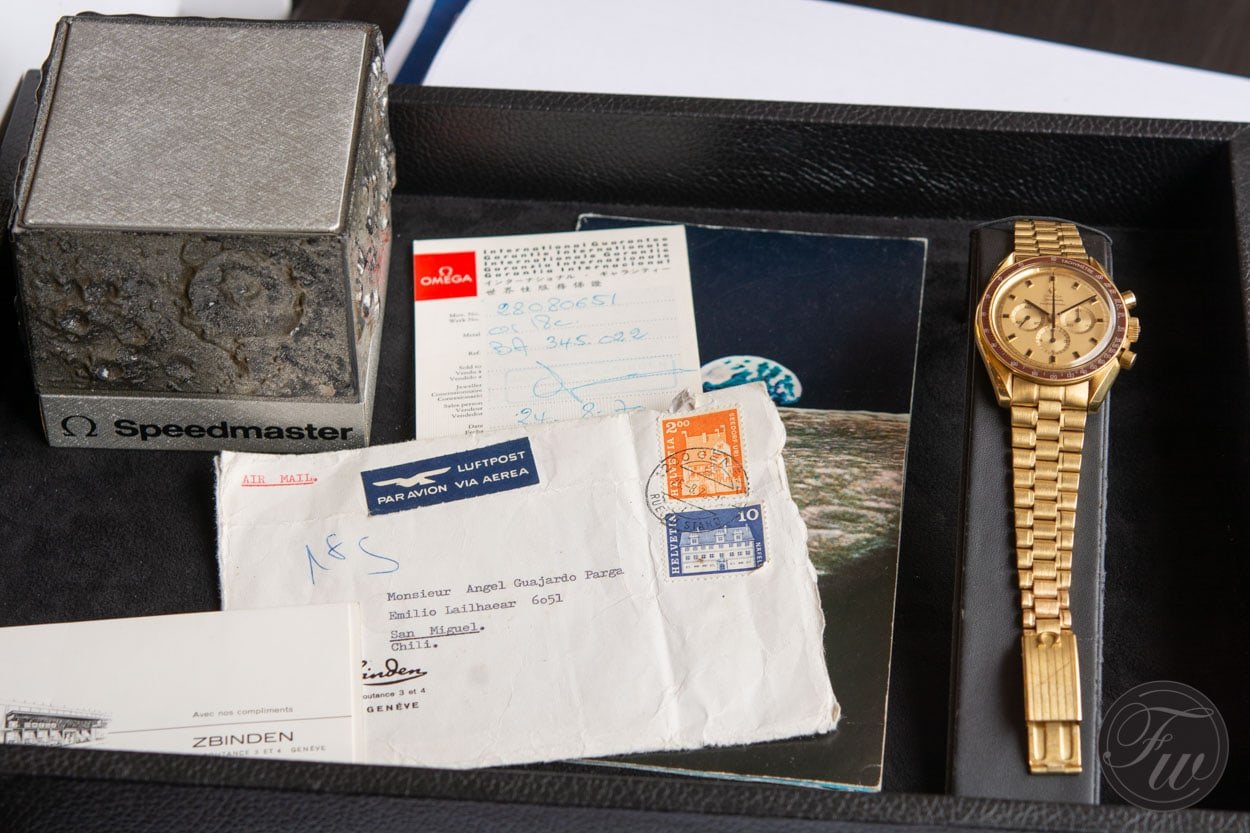 A prized piece of history

A funny side note is that one of the first special Speedmasters I had in my hands when I started collecting watches back in the 1990s was one of the 1,014 gold Speedmaster watches. My watchmaker at the time had one in his collection, and it was his prized possession. At the time, you could pick these watches up for the equivalent of less than €5K, which people still thought was a lot of money for a gold Speedmaster. That is absolutely unthinkable today. 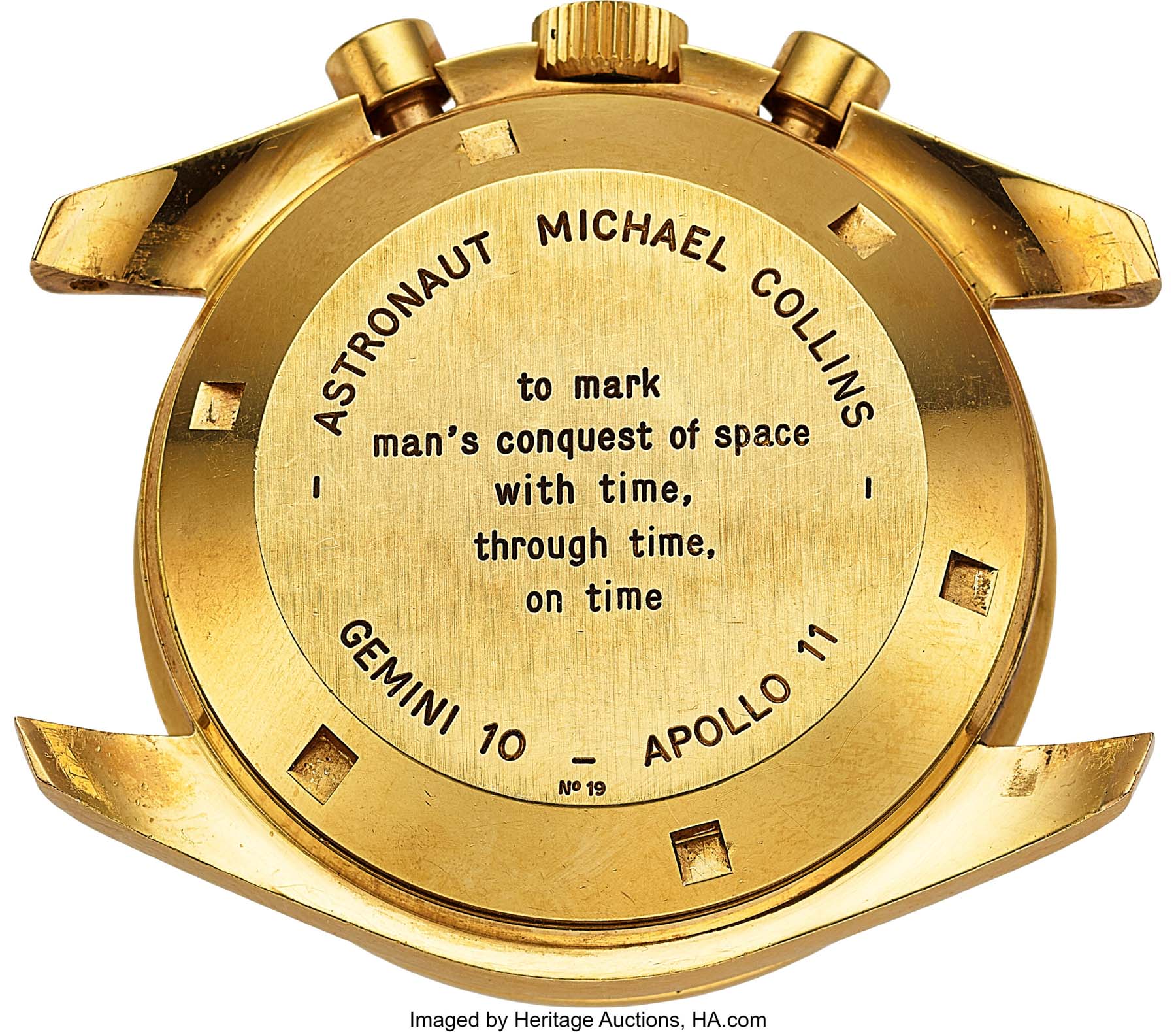 Apollo XI astronaut Michael Collins’s gold Speedmaster watch sold for US$765,000 at auction last June. And as I wrote here, it did not go to the Omega museum but ended up with a collector instead. You can find the regular-production version of the gold Speedmaster BA145.022-69 for less, of course. The market value of those starts around EUR/USD 40K and goes up depending on the condition. 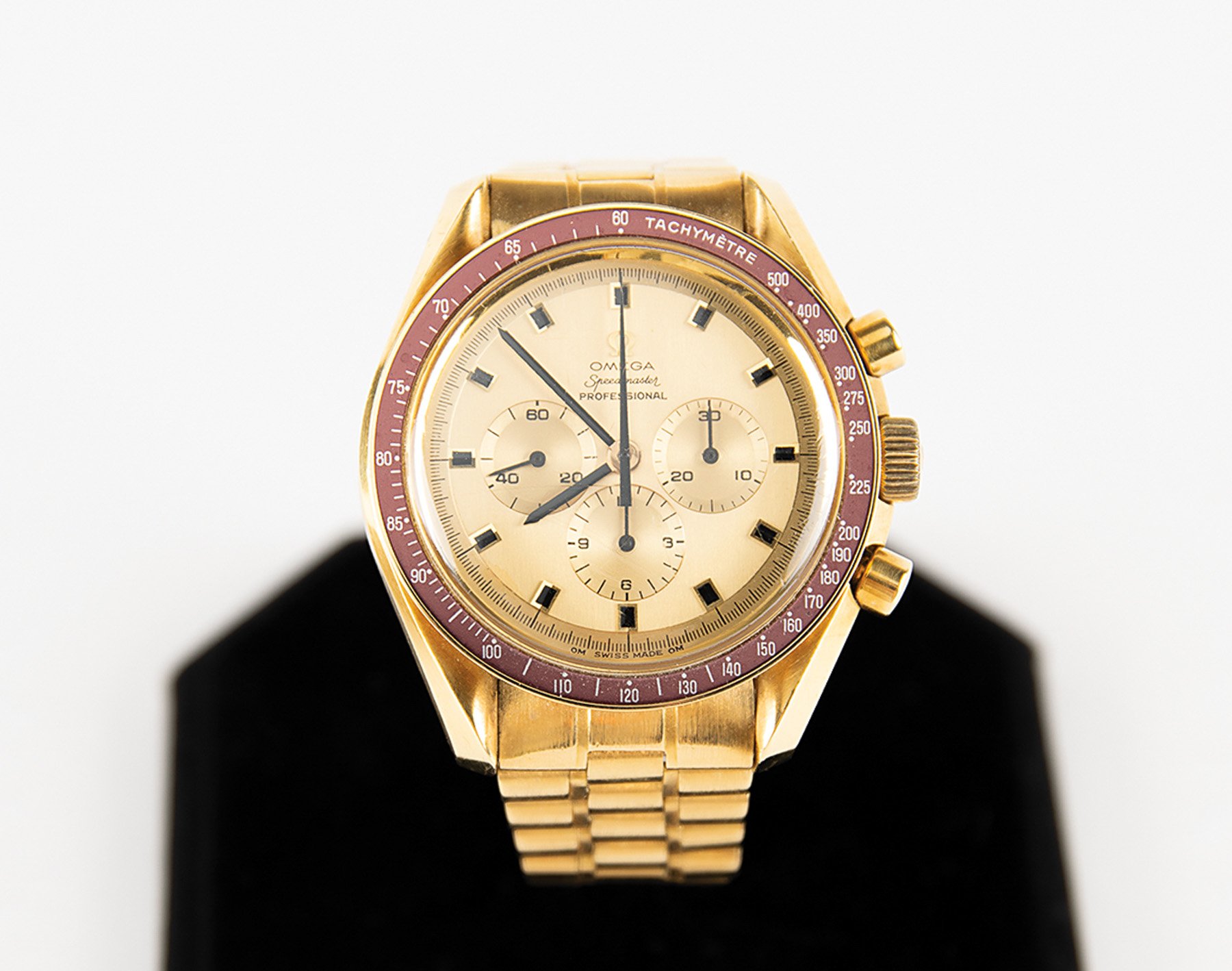 After Wally Schirra passed away in 2007, his widow offered to sell his gold Omega Speedmaster Professional BA145.022-69 to space collector and friend Lawrence L. McGlynn. He purchased the watch, and it has remained in his collection ever since. We have covered Schirra’s gold Speedmaster before in this article. Its case back featured the No. 8 designation as well engravings for the missions he flew. 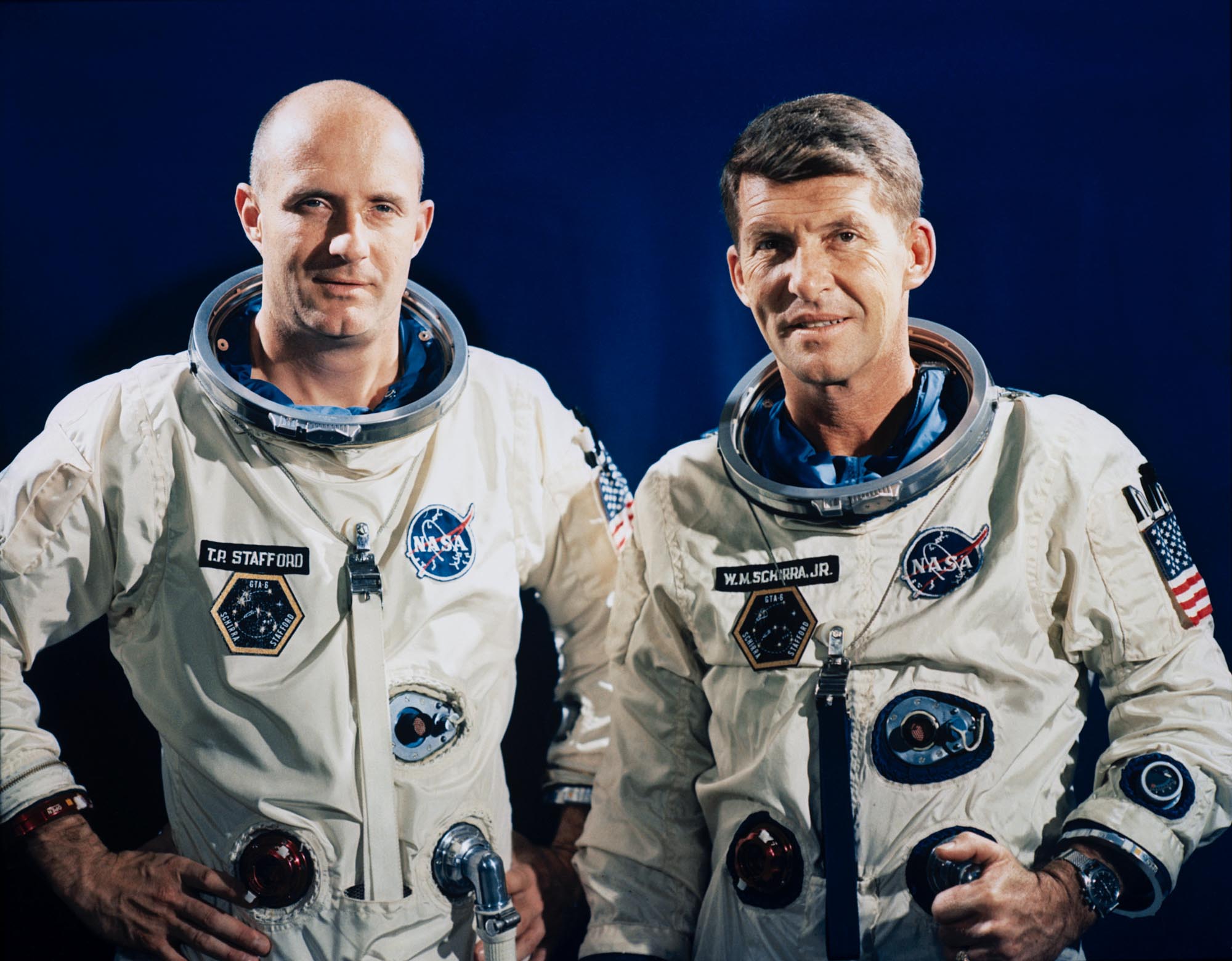 Schirra was one of the first seven astronauts selected by NASA, also often referred to as the Original Seven. Interestingly, all others (or their families) received the first few (numbered) gold Speedmaster watches, except Deke Slayton. The others were Scott Carpenter (#6), Gordon Cooper (#7), John Glenn (#5), Gus Grissom (#4), Alan Shepard (#3), and Deke Slayton (#27). 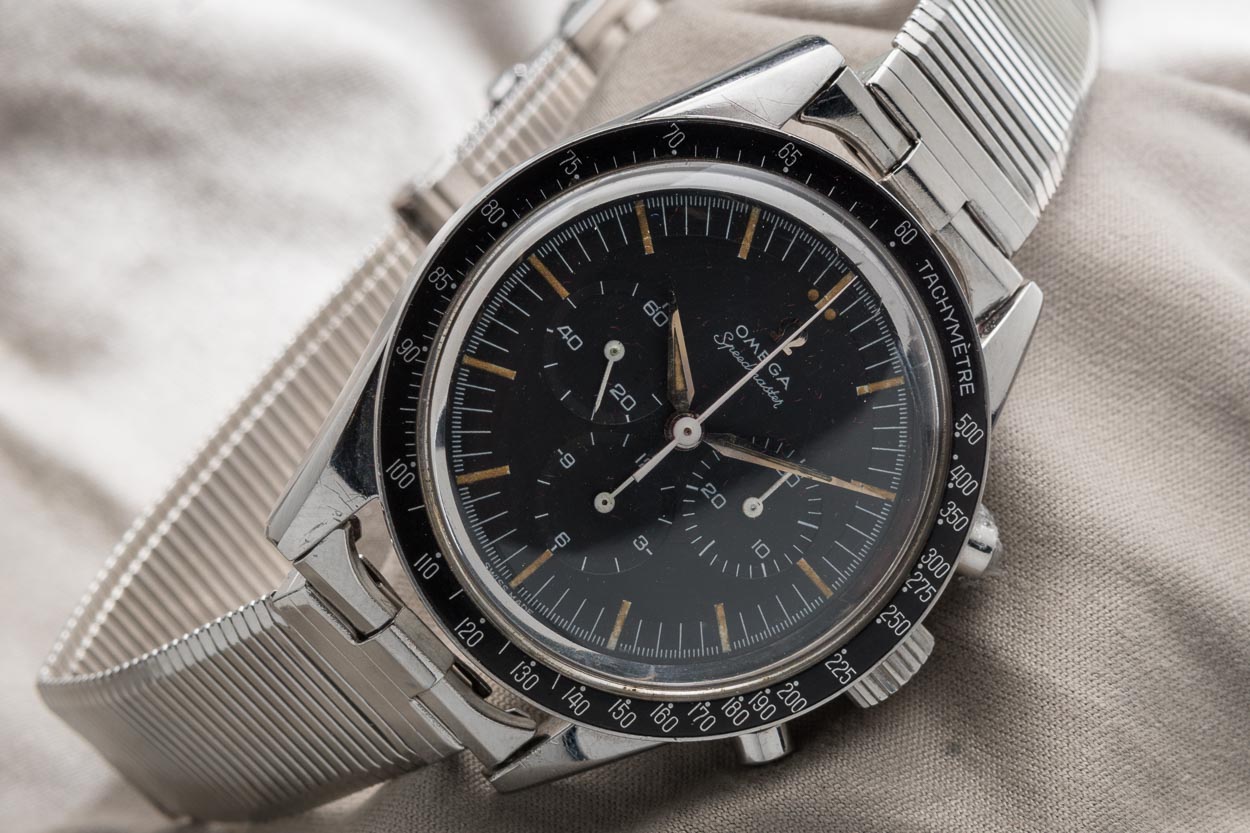 Fratello · A Conversation With Wally Schirra

Chuck Maddox: Since you were the first person to wear a Speedmaster into space, were you how Omega was brought into NASA? Did you bring them in together, or was it someone else?

Wally Schirra: Well, they [NASA] saw it. Deke Slayton and I were both working on the mission, and Deke was replaced, and Scott Carpenter took that mission, and I took the next mission. So Deke had an Omega, and I had an Omega. We bought them, and NASA had nothing to do with it. We just bought them and checked them. And then we took them to the Cape, and Pan American Airlines was the custodian of all the technical stuff at the Cape. They took the watches and made them super-accurate, in all six different positions. And I’d go into mission control and say, “Hmmm…  your clock is off about two seconds!”  They’d say, “What? What!” [Laughter all around] This was before the atomic clocks were around, so we had a lot of fun with it. Well, after that, I flew it [the Speedmaster], and then Cooper flew it; they said, “We might as well make this regulation.”  That’s how it came out. 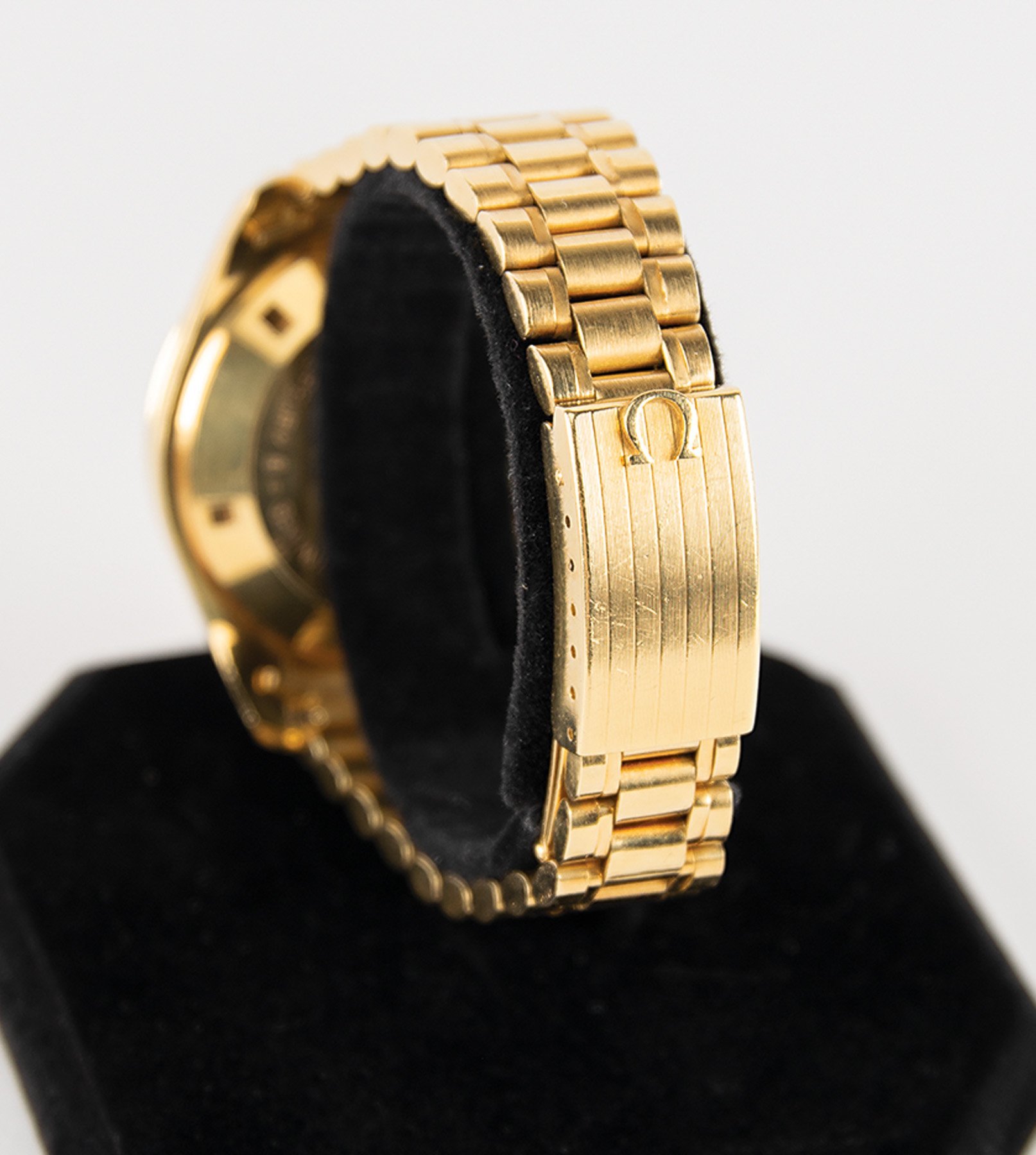 As we now know, that’s not exactly how it happened. NASA had to create a formal proposal to get watches from different brands and have them properly tested. It might be the case that Omega was on the radar because Slayton was already aware (and had one). However, watches from Longines-Wittnauer, Rolex, and Waltham were also tested (and failed). Later on, Bulova also sent a watch in for testing, but that one didn’t survive the strict test procedure either.

Back to the gold Speedmaster. It gets a mention in the interview (Chuck Maddox: “I was going to ask you if you still owned any Speedmasters, but I see you’re wearing your gold one.“). There are also pictures to back up that Schirra actually wore his gold Speedmaster. Space and watch enthusiast Philip from Moon Watch Universe identified 18 NASA astronauts wearing their gold Speedmasters. 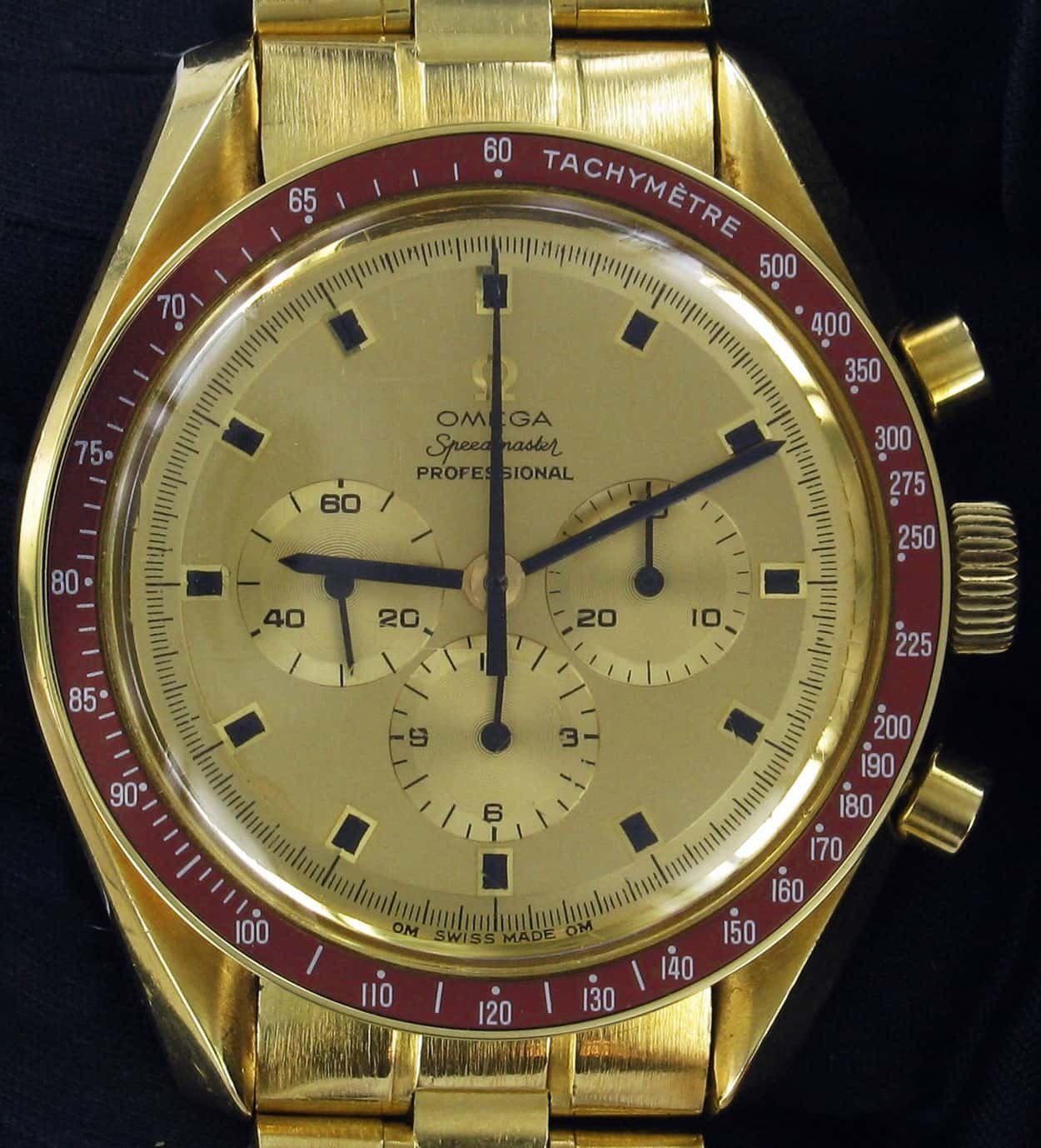 Owner Lawrence “Larry” McGlynn — who was also featured in Discovery Channel’s Space Dealers — wrote to me in 2015. He said, “Wally’s watch is special to me for several reasons. I knew Wally. Wally wore the first Speedmaster into space on Sigma 7. He is the only astronaut to fly all of the three US Space Race Era programs shown on the case back. The Omega staff has been very helpful to me. They found a contemporary ‘lunar crater’ box…”

The condition of Schirra’s Speedmaster

So I called Larry and asked him a few questions about the watch. He is a Speedmaster collector and owns 17 in total, including the three Snoopy models and a few space-flown watches. When I was on the call with him, Larry was wearing his Speedsonic on the lobster bracelet. He proudly told me that his first Speedmaster was the Snoopy 2003 model, a precious gift from his wife. But first and foremost, I wanted to know why he was selling this gold Moonwatch. “It is the 60th anniversary of the Mercury-Atlas 8 mission, and the watch also has the same number engraved in the case back as its serial. I’ve worn it during special events only, and I now feel it is time to let it go. Let someone else enjoy it,” says Larry.

He adds that this 18K gold Speedmaster from Wally Schirra is “in great condition, and it has not been restored.” According to him, “The watch runs fine; we’ve checked it with Omega. The gasket was replaced, which was necessary, and I could source an original red bezel for this watch. It used to have a black bezel, as the original red bezel had been replaced at some point.”

Wally Schirra and Larry McGlynn were friends, and Larry remembers him being a great and fun guy. “He loved puns and gags, probably also to deal with the stress and tension that came with the flying.” He adds, “Wally had a ‘let’s get it done’ mentality when it came to working, but he also loved pulling practical jokes.” 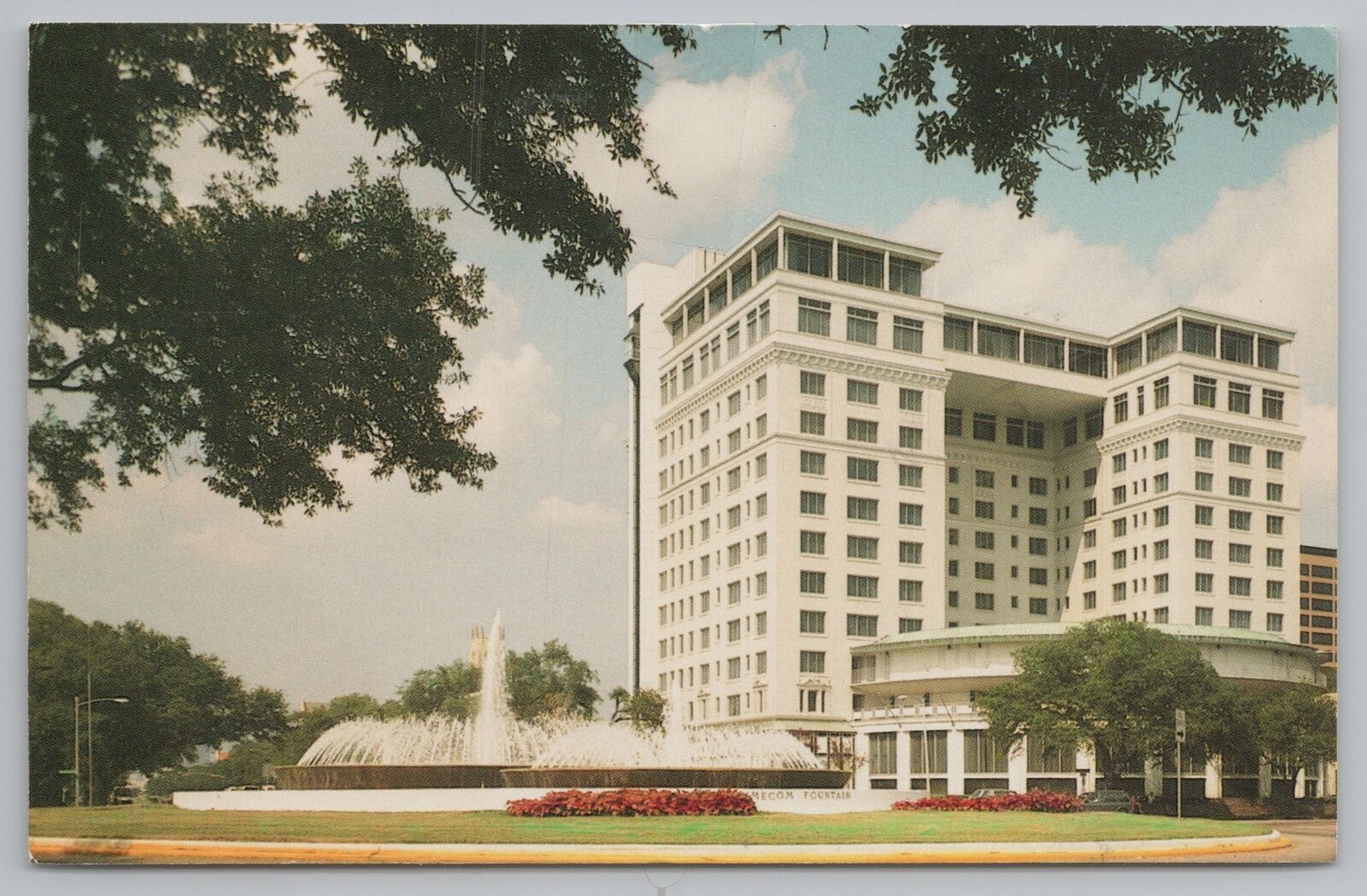 A fancy event in Houston

I asked Larry whether he knew more about the banquet at the Warwick Hotel in Houston on November 25th, 1969. He talked about it with (Apollo 15) astronaut Dave Scott, who was also there that night and received an 18K gold Moonwatch (#16). According to Scott, it was an incredibly fancy black-tie event where the guests wore tuxedos and gowns. The astronauts received their gold Speedmaster watches one by one in a ceremony-like fashion. However, no photographs of this evening in Houston are available, and it remains unclear if any were taken. 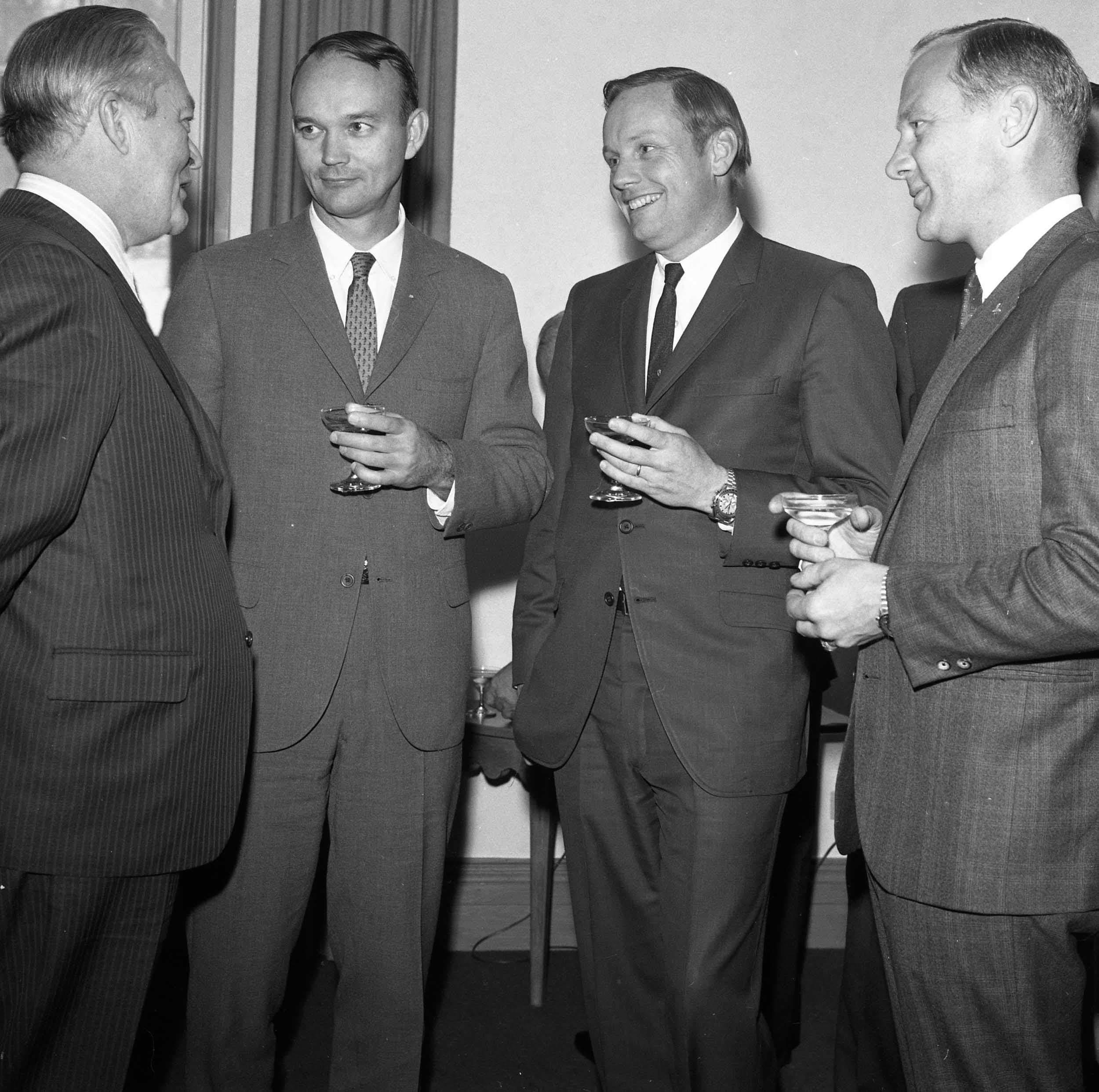 Where are the other Speedmaster “Tribute to Astronauts” watches?

When I asked about the other gold Omega Speedmaster Professional “Tribute to Astronauts” watches, Larry told me he has seen a few of them in the past. He knows that astronauts Gene Cernan (Apollo 17, watch #18) and Dave Scott (Apollo 15, watch #16) never sold or auctioned theirs. Unfortunately, some of the gold Speedmasters given to the astronauts were lost or stolen. General Thomas P. Stafford’s 1969 gold Omega Speedmaster (Apollo 10, watch #13) was lost (he now wears the gold version from 1980), and Neil Armstrong’s gold Speedmaster (Apollo 11, watch #17) disappeared in the 1980s. Astronaut Jim Irwin’s gold Speedy (Apollo 15, watch #1003) was also lost.

Only on rare occasions does a gold astronaut-owned Speedmaster Professional come up for sale. Larry decided that it was time to let the precious watch of his friend Wally Schirra go. The RR Auction estimate is US$250,000, but for all we know, it might go even higher than that during bidding. The auction will conclude on October 21st, 2022.

You can find Wally Schirra’s gold Speedmaster up for auction here. If you plan to bid on this watch, we wish you the best of luck!