One of the toughest-looking dive watches out there has received a more historically accurate overhaul. ZRC has released two new models carrying the name Grands Fonds 38 Heritage. Their designs are fully inspired by the watches that ZRC began producing in 1961 and which became the official watch for the French Navy in 1964. There’s a time-only version with a ceramic bezel, the S2, and one with a date and an aluminum bezel, the S3. Let’s take a look!

The current lineup of ZRC watches (one of which Sky reviewed here) definitely looks like it takes inspiration from the original Grands Fonds from the past. However, the brand also tried to update the design a bit. In addition to black, ZRC’s current collection includes newer dial colors such as green, blue, and full lume. The watches also include different materials, such as ceramic and titanium. All of these models are sized at 40.5mm and above. For a watch that already has quite an impressive case shape, that might be too much for some of us. That, in combination with the fact that the original watches from the ’60s were closer to 36mm, made ZRC decide to now make a smaller re-edition with a 39mm case. 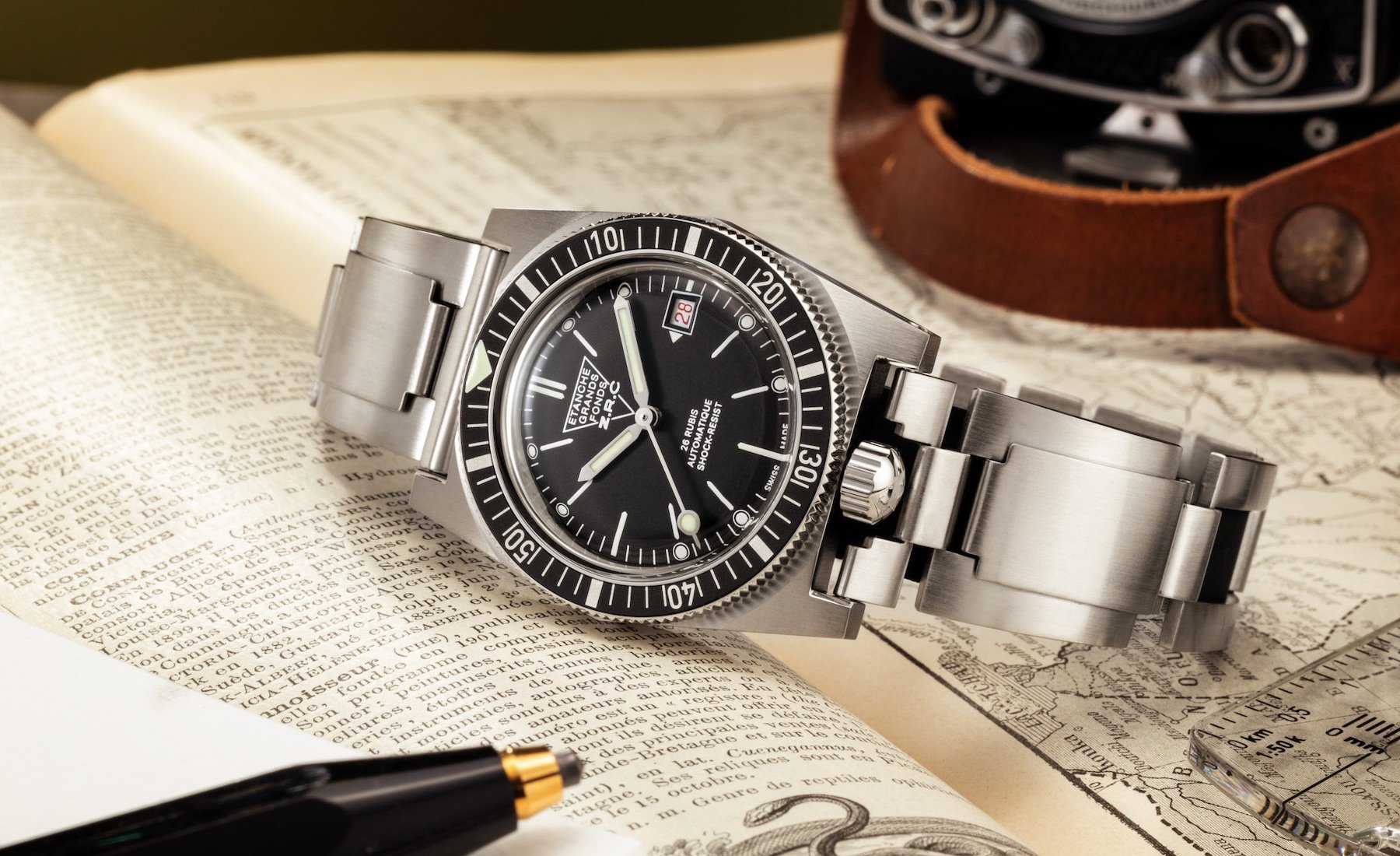 That’s right; the new ZRC Grands Fonds 38 Heritage, despite what the name suggests, is actually 39mm wide. Thankfully, there’s little else here to get confused about. The Grands Fonds is definitely still built for its purpose of deep-sea diving. With a thickness of 13.75mm and a lug-to-lug of 48.8mm these are proper tool watches, and it shows in the angular, hexagonal case, the big crown at six o’clock, and the no-nonsense, easy-to-read dials. These watches are ready for any adventure. That’s especially true for the ones that take place below sea level thanks to the 300m water-resistance rating.

The steel bracelet the watches come with is an exact stylistic copy of the original from the 1960s. It’s equipped with an integrated spring system that will automatically adjust itself to the wearer’s wrist size. Furthermore, the end link ensures that you won’t forget to screw the crown back in. If you leave it unscrewed, the bracelet won’t be able to return to its usual position. As such, you’ll always be reminded to screw the crown back in before putting the watch on your wrist. That’s a great safety net if you ask me!

Both GF38s are powered by an elaboré version of the automatic Sellita SW200-1. Consequently, they have an advertised accuracy of ±7 seconds per day and are adjusted in three positions. This caliber also provides a power reserve of about 38 hours.

As I mentioned, ZRC is introducing the Grands Fonds 38 Heritage in two versions. Other than the bezel inserts and the dials under the domed sapphire crystals, the watches are identical to each other. The first one is the GF38163, nicknamed the S2. That’s the time-only version with a big numeral at each quarter and no minute track. It also features big, fat Magnum-style hour and minute hands and a lollipop seconds hand. The ceramic bezel insert is covered in dots of lume to indicate the time spent underwater. While I thought this looked like quite a modern feature, it’s actually an original design element from the ’60s. At 12 o’clock, you can find the ZRC branding and the “Etanche Grands Fonds” (Waterproof Deep Sea) text, while at 6 o’clock, it shows the features of the movement. Oh and don’t worry, there’s no ghost position on the crown for the date that’s not there.

The text on the dial of the S3 version is identical. However, instead of big numerals and no minute track, you’ll find a date window at 3 o’clock and minute markings all around. The hands are a bit slimmer, and the bezel on this version is made out of aluminum. It also uses a more classic numeric indication for the time spent underwater. I think my pick would be the S2 version because of those bigger numerals. But if you prefer to have a date, the S3 doesn’t look bad at all either. 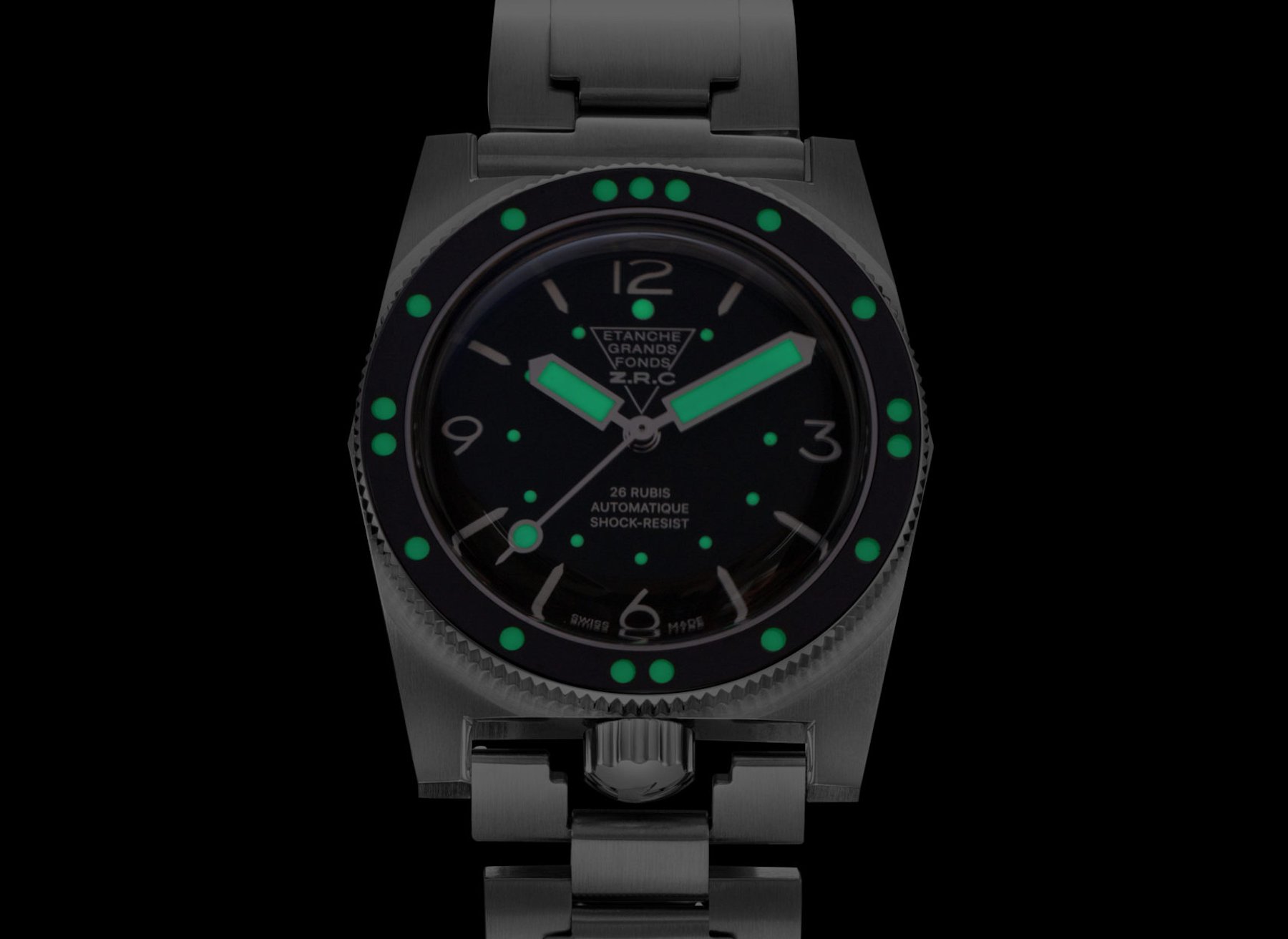 I always thought that modern ZRC watches looked very attractive because of their pure tool-watch character, but their size also overwhelmed me a bit. I’m curious to see how this 39mm version will fit my 17cm (6.7″) wrist. The bracelet is also something I’d like to see in real life, especially with that spring-loaded sizing system. But I’m sure these watches will also look great on a nice, thick NATO strap… if only that crown doesn’t get in the way.

Both versions are available now for a price of CHF 3,190. If you’d like to know more about the Grands Fonds 38 Heritage, please visit the ZRC website.

What do you think of the ZRC GF38, and which version would be your pick? Let me know in the comments below!