Owning a brand must be difficult sometimes, even if money was no object because it inevitably skews your opinions.

I wear men’s watches, in general. And I judge what men wear – it’s an occupational hazard. Some watches instantly speak to me, some immediately switch me off. So I try to focus on the joy of discovering and sharing. And sometimes the ones that leave me unsure at first sight, end up generating the strongest reaction. 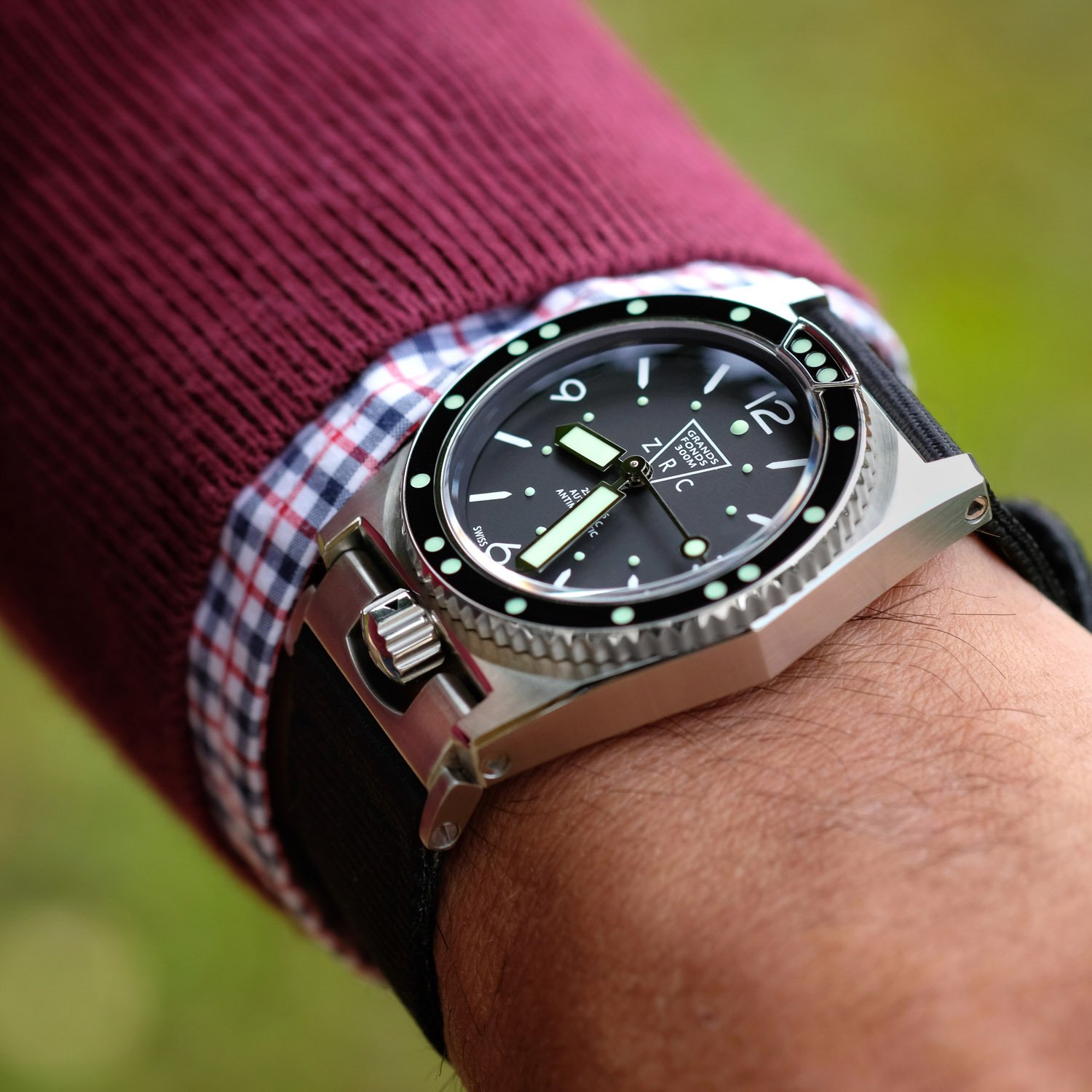 One reaction of late turns out to be a smashingly appropriate simile, for my feelings towards the ZRC Grand Fonds 300 1964 French Navy Reissue. I must have stumbled across this brand about a year ago. Truth be told, I didn’t get it. I remember looking at it, and kind of shrugging it off. If you’d have asked me my takeaway maybe an hour or two after our first encounter, I would have said it was “a bit weird”.

Fast forward a year and the watch reentered my brain for no good reason, compelling me to take another look at it online. Still, I was not convinced, but this time I gave myself a couple of hours to study it and the brand’s history. And suddenly, like a light switch being flipped, I was converted.

What had appeared weird and jarring (the oddly basic case middle and six o’clock crown) was now inspired. What I’d dismissed as gimmicky (the many luminous dots on the bezel) was finally appreciated for its execution. And what I’d filed in my mind as just plain bizarre (the prominent rider tab at 12 o’clock on the bezel) was duly understood to be a conscious complication that I’d never heard of before (thanks to the fact that the ECS “Easy Clean System” is patent pending).

This transition from perplexed apathy to bubbling lust is not exclusive to the ZRC Grand Fonds 300 1964 French Navy Reissue. I have felt it before. And because I’ve felt it before I know how genuine this new attachment is. It’s a ‘click’ that is hard to come by, but very, very easy to enjoy. In terms of the feelings I search for in watchmaking, it is the grail itself – a proud, effervescent excitement whenever the watch enters your mind, and an irresistible desire to hold, operate and gaze at it on the wrist.

Yeah, now I’m the weird one. 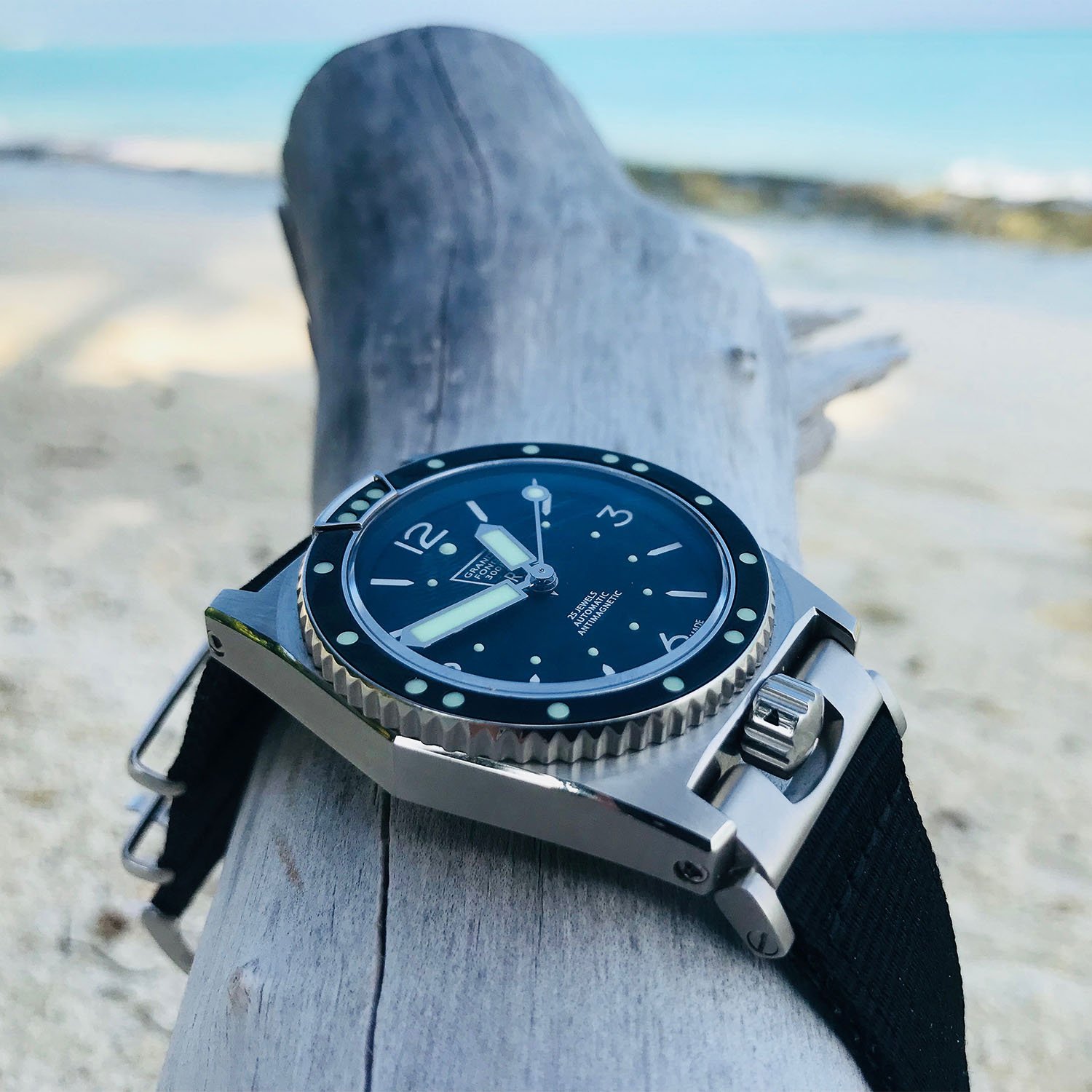 Yeah, now I’m the weird one. But I think that it’s a feeling most watch lovers can identify with. And it’s exacerbated by the awareness of just how divisive your decision is going to be. The ZRC Grand Fonds 300 1964 French Navy Reissue is obviously not going to be a watch for everyone. It has too much character. Too much – perhaps appropriately – je ne sais quoi. But you never fall for these watches deliberately. You never go out of your way to pick an opinion-splitting piece because you’re a contrarian (contrarians are generally too contrived to make such a nuanced choice). This is a true hidden gem you secretly hope no one else can see what you see, so you can hog it for yourself. But as I said in the beginning, I prefer the joy of sharing…

So why do I like it so much? What is offering that you can’t get anywhere else? Truthfully, the most appealing aspects of ZRC as a brand are its clean and clear visual identity and the brand’s concise but compelling history. The mechanics are solid and reliable but hardly breathtaking: The automatic ETA 2824-2 elaboré ticks away inside, offering a power reserve of 38 hours. It is the stark design, that marks these watches as bold outliers from a plucky independent brand, worthy of our attention.

There are four watch ‘families’ available, for a total of just ten models, not counting strap options. That’s it. To make brand identity even stronger, every single model uses the same case. Nine of these cases are made from stainless steel (three of which boast a DLC coating), while one of them, the newest of the bunch, is made in bronze. 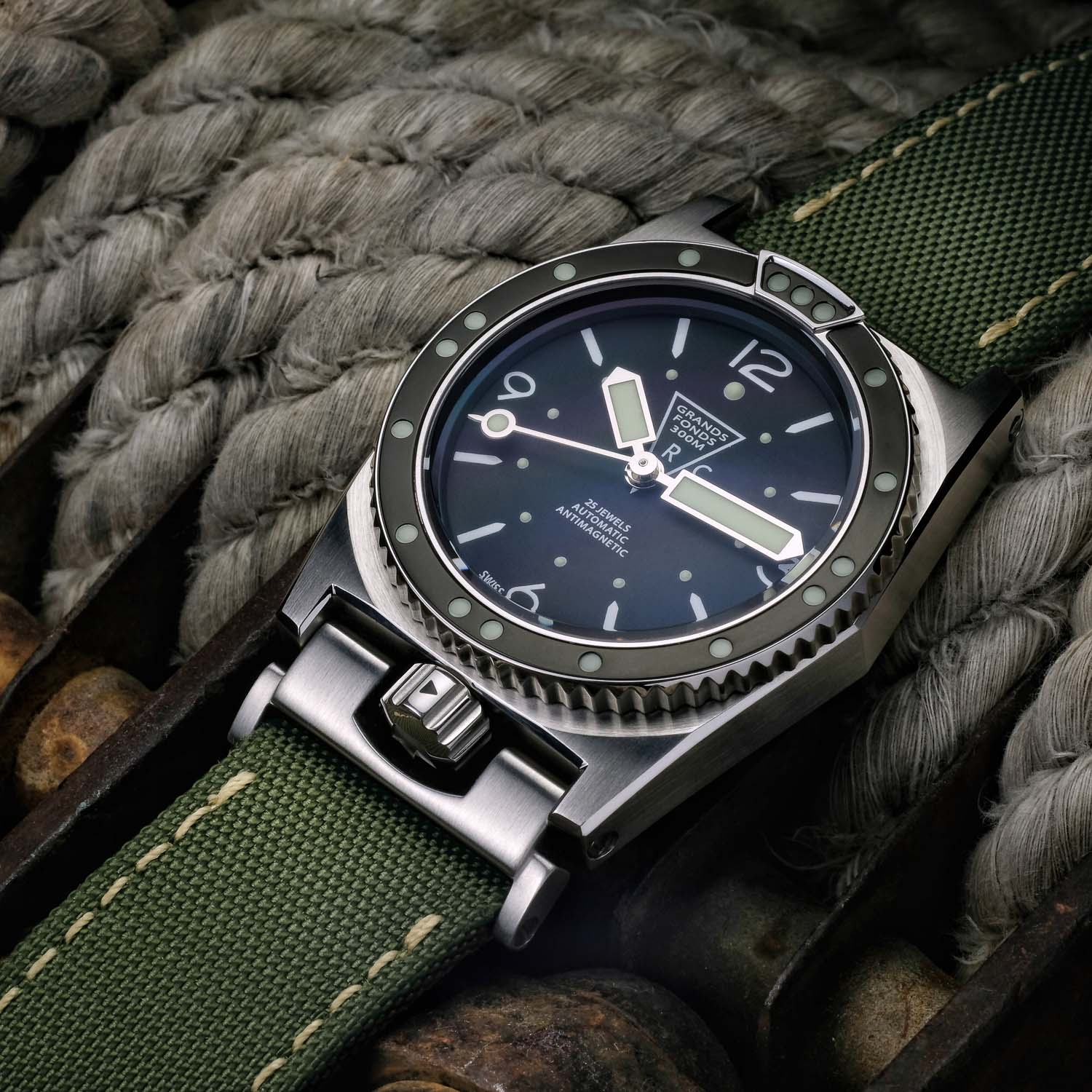 These ‘monobloc’ cases are odd, angular things measuring just 40.5mm across. The fact that the screw-down crown is located at six o’clock not only improves wearability but also enables the display to be sufficiently large so as to remain legible, without adding any unwanted bulk or heft to the watch.

And talking of that screw-down crown and its unusual position, it would be remiss to not point out the added functionality. The end link attaching the case to the strap or bracelet may appear to be irksomely necessary. Ingeniously, this link is designed so that it will not allow the watch to sit flush against the wrist if the crown is left unscrewed. This failsafe reminder to always close the weak spots on the watch before submersion is a neat addition that I like.

As a proper dive watch, the ZRC Grand Fonds 1954 French Navy Reissue satisfies the criteria of ISO 6425 with its luminous seconds indicator, luminous hands, unidirectional, 60-click timing bezel, and water resistance to 300 meters. The steel case and bracelet can also claim ISO764 certification. This certificate proves that the case and bracelet meet the internationally agreed upon standard to be qualified as antimagnetic. In layman’s terms that means the case and bracelet can resist being exposed to a magnetic field of up to 4,800 A/m.

While we’re on the bracelet, I’ve got to mention how much the spring-loaded first link is supremely utilitarian. It expands and contracts to provide a snug and comfortable fit, either on the bare wrist or over a diving suit. In terms of form following function, it is wildly unapologetic and all the better for it. Its design has a vintage feel but is in no way sentimental. Its real triumph, though, is in its execution. 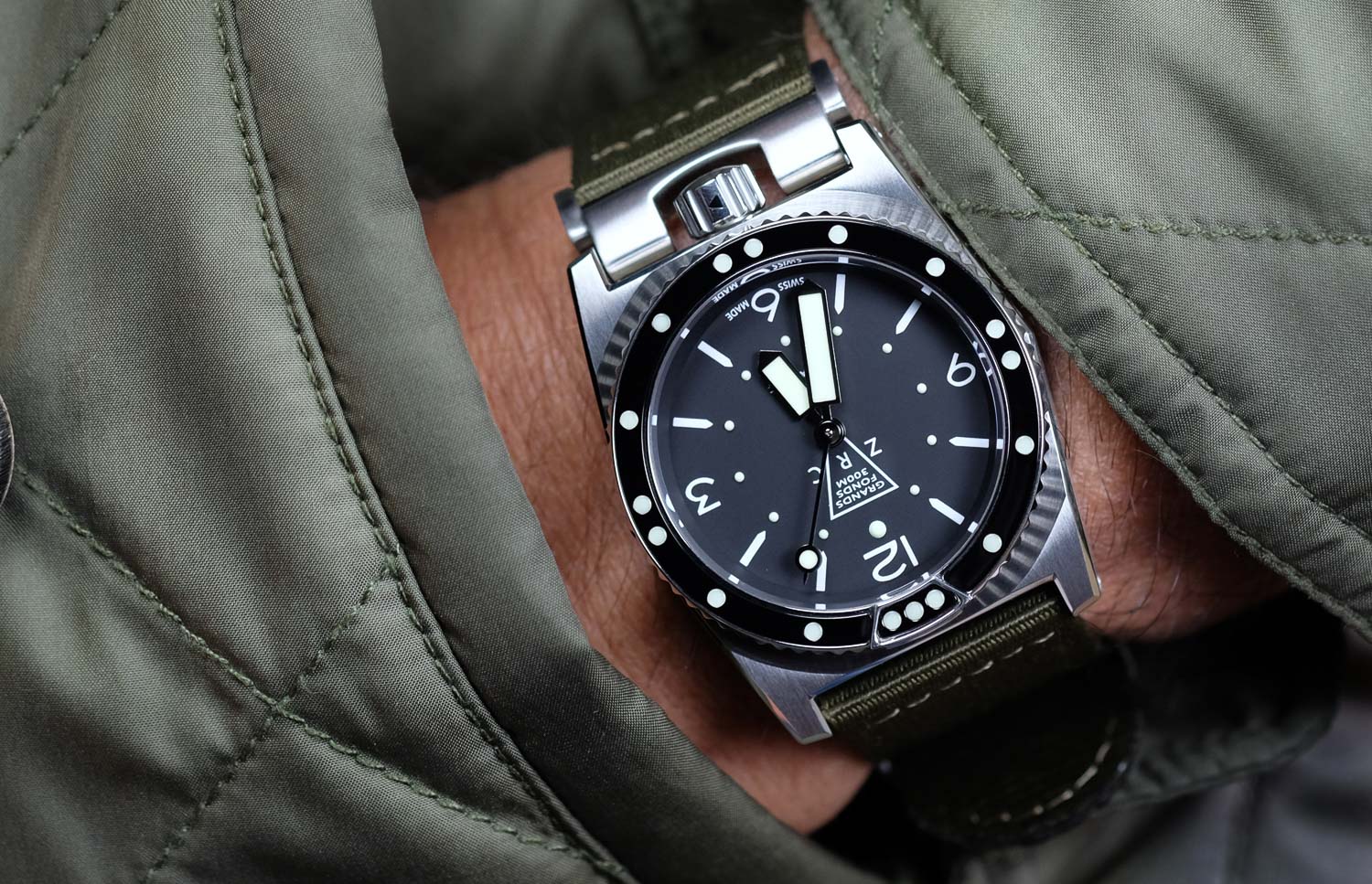 The same can be said for the bezel. On first glance I wasn’t sure about the dots, assuming they would be blobs of paint sunk into recesses. On closer inspection, it is possible to see that each dot is a preformed disc. It gives an incredibly sharp edge to the lume, and a sense of deliberateness that is rare and never to sniffed at in design. And as for the ECS tab, I couldn’t be more impressed. During this watch’s stint as the official watch of the French Navy (1964-1982) the divers complained that sea salt would jam up the bezel mechanism over time. ZRC’s solution was to add an opening in the bezel so that the inner workings could be flushed out with fresh water. Simple? Yes. A perfect solution? Surprisingly so.

Surprising is the word for this watch, and for the limited but expertly restrained offering from this 115-year old Genevan company. With an understandable brand, total autonomy, and a slick online presence that is only going to grow, this is an independent brand from the past that is perfect for right now.