It’s totally fitting to be writing about the newest additions to the Accutron Spaceview line while reading a book called The Brief History of Timekeeping by Chad Orzel. Orzel’s book highlights several key moments in the development of timekeeping technologies that have occurred in the past 2,500 years, including Stonehenge-like structures in Northern Europe, sundials, clock towers, and the first mechanical movements.  Innovation has picked up speed in the past two centuries, and it seems that it has exploded since the 1950s. The Accutron Spaceview revolutionized timekeeping in 1960 and revisited its breakthrough technology in 2010.

It has been 12 years since RJ spoke about the reintroduction of the Spaceview 50 years after the first Accutron model debuted. In 2010, Bulova presented a re-imagined version of the original technology with an electrostatic movement. After six decades of association with Bulova, Accutron became a separate brand within the Citizen Group in 2020. The Accutron team of engineers based in Tokyo has continued to refine the technology to make it better than ever. Although it may not make for the perfect daily wearer, the Spaceview (one of the two models released in 2020, the other one being the DNA) is a testimony to the world’s watchmakers’ continuous effort to create the most accurate wristwatches possible. 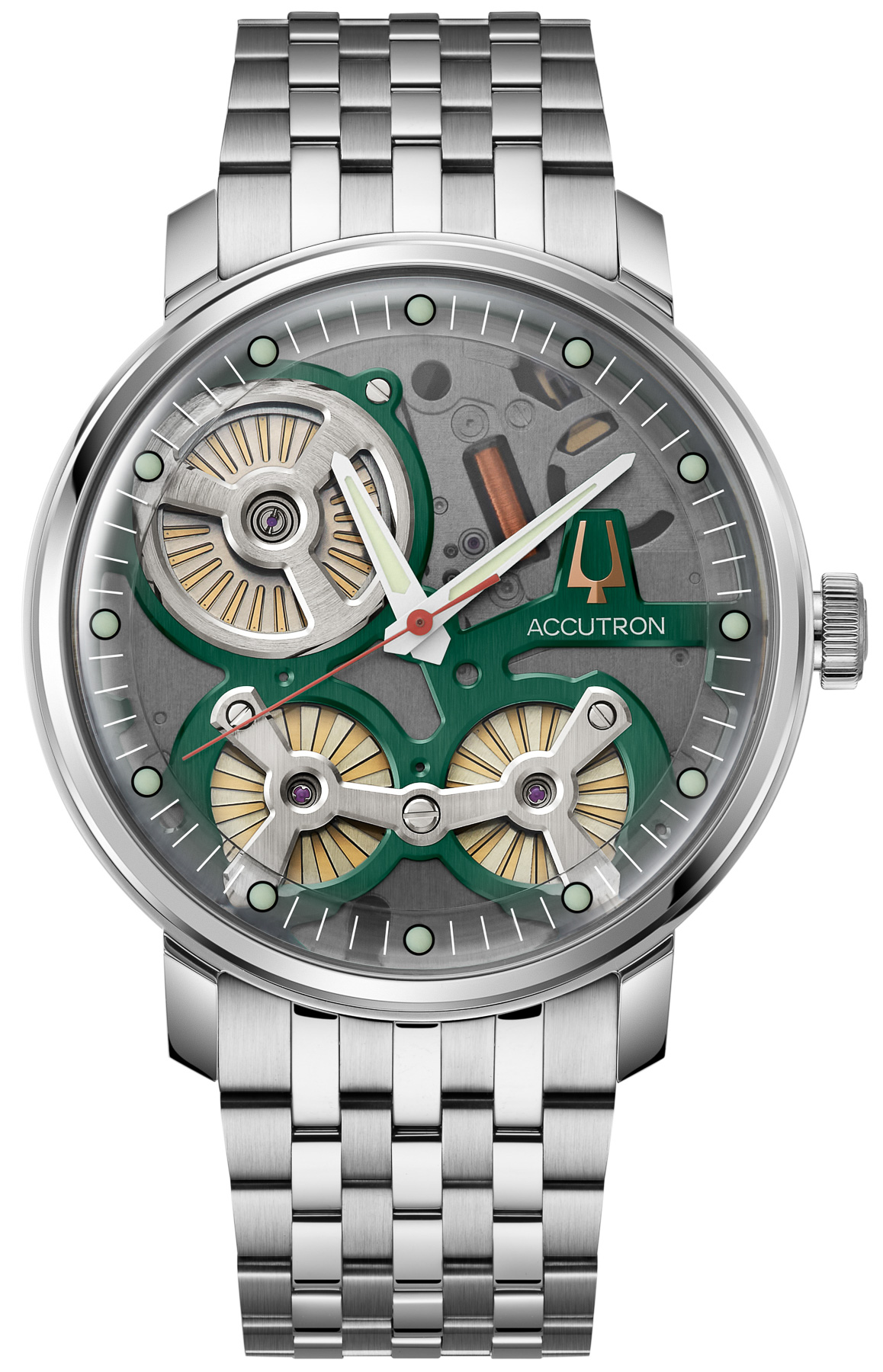 Where the Accutron Spaceview fits within timekeeping history

Watchmaking has come a long way since stone structures and sundials. And while it seems that the move from pocket watches to wristwatches during and after World War was a major leap in itself, it pales in comparison to the creation of the first self-winding mechanical movements, the screw-down crown and case back, Seiko’s first quartz movement unveiled in 1969, and even more so looking at the first Accutron Spaceview. The latter used a battery to power two transistors that activated a tuning fork to regulate the time — a first in horology. While quartz technology eventually became cheap and available to the masses, the Accutron electric movements did not. That said, the original Accutron and the current models constitute fascinating feats of engineering which I’ll try to briefly explain below.

Having a minimal understanding of how things work (I used to take apart radios and VHS players as a teenager without ever being able to put them back together), the simplest way I can explain how the Accutron works is by comparing it to a wind turbine. With a turbine, the wind pushes the propeller blades around a rotor that spins a generator and creates electricity. The Accutron technology uses the movement of the wrist to activate two turbines, which create an electric current that is transferred to two motors. One motor powers the seconds hand, giving it Spring-Drive-like fluidity, and the other one powers the hour and minute hands. 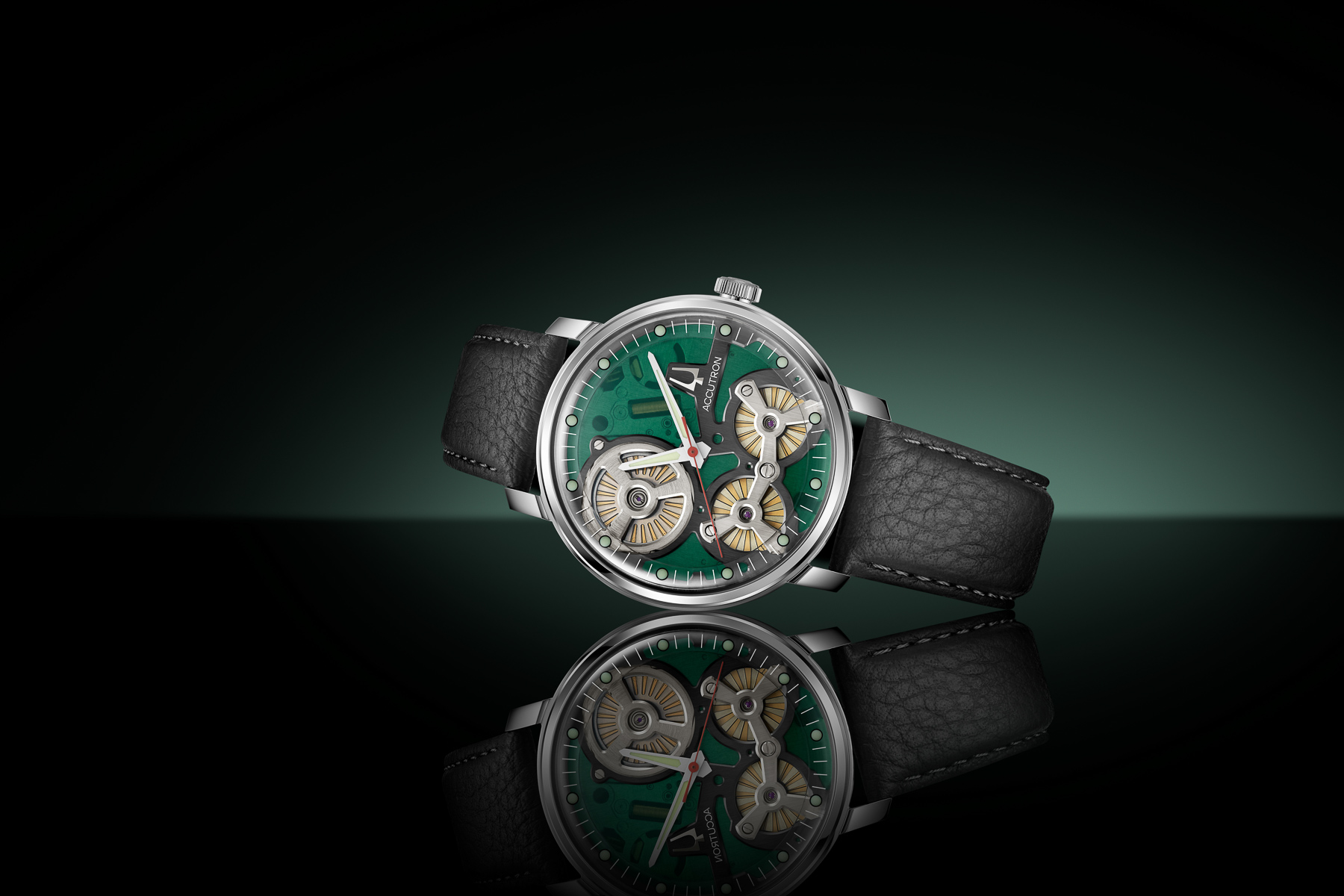 Believe me, there’s a lot more that goes into this technology to make it wearable in a 43mm case and accurate to ±5 seconds a month. But that’s as comfortable as I am in explaining how it works given my profound lack of understanding of the various components that make up the movement. The point, however, is that the Accutron is ingenious. It was recognized as such in 1960 when it first came out, and it’s still very much worthy of our appreciation today.

Accutron has refined its technology to make it more reliable, less noisy, more accurate, and prettier to look at through the open-work dial. You can see all that is happening there, and if you turn off the lights, you can see turbines generating the electric current. That’s quite unique. However, all of these marvels of technology come with a certain price tag — US$3,450 for the green-dial version on a leather strap and $3,850 for the smoke-gray version on a bracelet.

As I mentioned above, the Accutron lineup of electrostatic watches is unique in that there is no other brand that uses this type of technology to power a watch. Although the first versions of the Accutron were closer to technologies developed by competitors back then — Lip and Elgin started the race for electronic watches before Bulova/Accutron did, and Hamilton was close to a finished prototype a few years before the first Accutron was unveiled — the current Spaceview, with its even more advanced technology, is an actual wearable piece of horology. It has a mostly polished case measuring 43mm in diameter, 49.5mm from lug to lug, and 15.9mm thick. A sapphire crystal sits above the open-worked dial, which displays a striated brushed finish and polished chamfers on the components.

Earlier, I suggested that the Accutron never came cheap, but it was (and is) actually fairly attainable given how unique the Spaceview is. As we know, the two new models cost $3,450 and $3,850 respectively, which is peanuts compared to the cost of the first Seiko Astron timepiece. Unveiled in 1969, that watch retailed for $11,900 in today’s money. The first Accutron retailed for — according to the little information I could find — around $1,700, also adjusted for inflation. The first Accutron with its breakthrough technology cost much less than Seiko’s quartz-revolution timepiece. 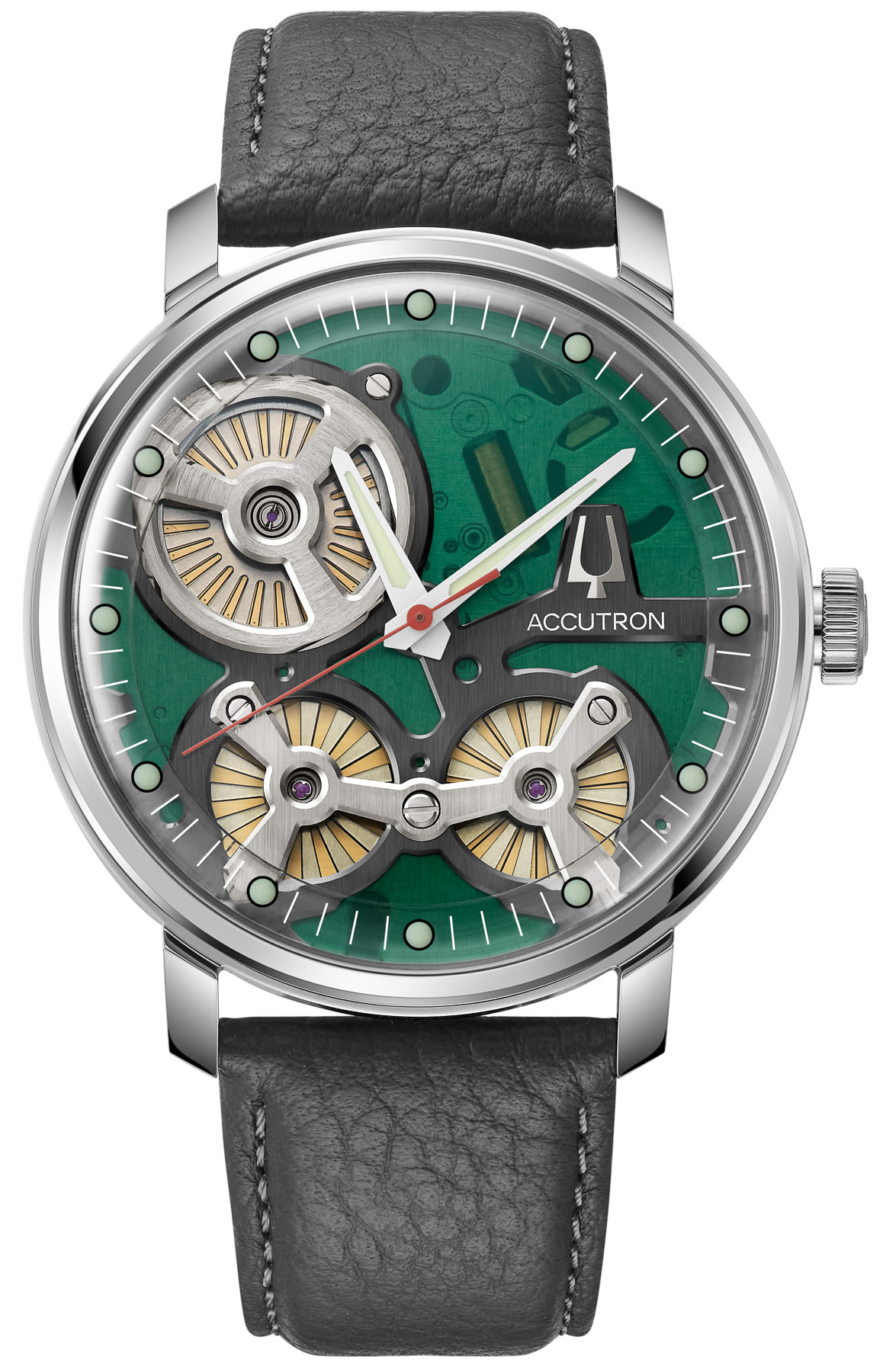 The king of power reserves

Looking at the Spaceview 2020 models from a regular horological point of view, these watches are rather elegant thanks to the dimensions and polished surfaces. The Spaceview has a rounded case and stubby, angular lugs, and the dial — although only there to let us admire the movement — does have three hands to tell the time. The hands point to hour markers and a minute track, which can be found on the outer edge of the dial. Not only is the Spaceview accurate, but it also has an outstanding power reserve of two years. Yes, two years! Although it seems that powering the movement takes some work, once you’re all set and done you don’t have to worry about it for a couple of years.

So, what’s actually new about these two models compared to the ones from two years ago? Well, the first one received a “gray treatment”, meaning most of the dial/movement is gray with Accutron green accents. It also comes on a bracelet, which is a first for this modern series. The other version on a strap has received a “green treatment”, meaning most of the dial/movement is green with gray accents. Both models have 50 meters of water resistance, a transparent minute track, and green lume plots. Objectively, what seems to differentiate these two models from the 2020 ones are the colors of the dial and lume plots. The technology and the dimensions of the watches remain the same. 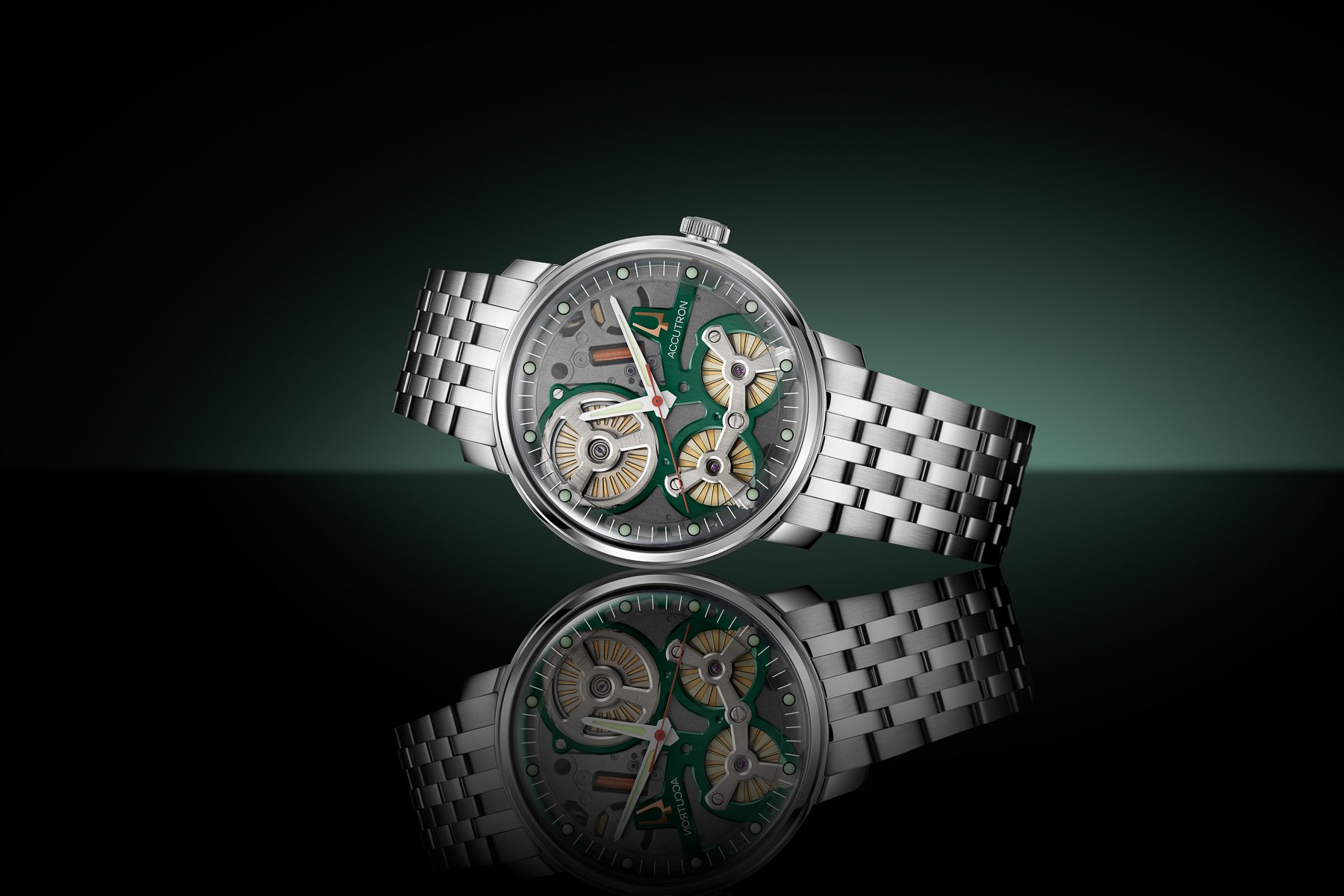 There’s a lot I tried to say in this article, and I hope it was clear and helpful. Although I would not buy a Spaceview myself — mainly because I don’t like the way it looks — at its core, it is a remarkable piece of technology that is accurate and wearable, two things that we all want our watches to be. While normally, breakthrough technology comes with a price in the tens of thousands of dollars, the Accutron Spaceview is relatively affordable. Yes, it only tells time, but it does so in a way that changes our relationship with timekeeping. As Accutron points out in its advertisement, the Spaceview definitely is a conversation piece more than a watch.

What are your thoughts about these two new models and the Spaceview collection in general? Please leave your comments below.

This has been a guest contribution by Vincent Deschamps.