For the first time again in a long while, I am super enthusiastic again about a watch. I’ve worn the Jaeger-LeCoultre Master Perpetual from the moment I picked it up, till the very last hour before I had to hand it over again.

Yes, we need to give back the watches that we review. In most cases I am not particularly sad about it, it is our work to do so. However, it has been quite a while ago that a watch made me super enthusiastic again for my own wishlist. Especially a watch in the higher end, with a nice complication (other than a chronograph or GMT). 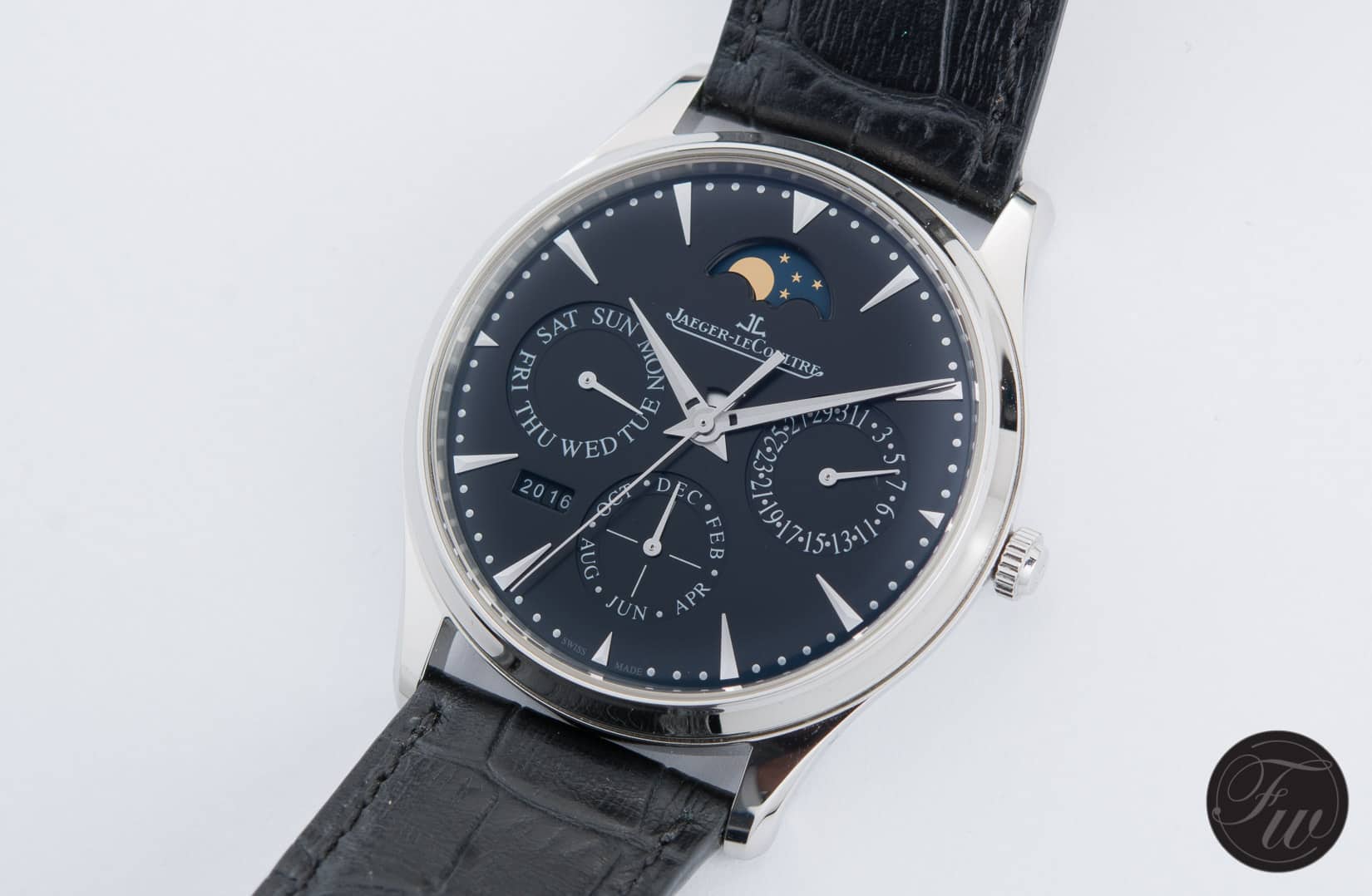 This watch has been introduced last year, during the SIHH 2016. We already wrote about it in March of this year, in this article. What I didn’t realize back then, is how awesome this watch is as a daily driver. I actually still didn’t realize this when I picked up the watch about two weeks ago, at the Richemont office in Amsterdam.

Jaeger-LeCoultre presented this watch without too much fuss in my opinion, during their presentation at the SIHH. I tried it and liked it, and made sure we got it on camera. The price was certainly interesting for a watch with a perpetual calendar, of course. Just below 20.000,- Euro, including taxes. Still a lot of money of course, but for a perpetual calendar from a manufacture like Jaeger-LeCoultre it is very attractive.

Non-stop on the Wrist

As I wrote above, the moment I picked it up, I put it on the wrist and I basically didn’t take it off. Even my wife, who isn’t the biggest fan of classic looking timepieces (you should hear her comments sometimes) told me ‘Now that’s a nice watch.‘. Because I wore the watch intensively over the last two weeks, I now know what I like about it and that there are only two things I don’t like about it. And that these two things would be no deal breakers for me to buy one in the future.

I find it very difficult to find a modern watch with a modest diameter and a round shape, that can’t be immediately classified as boring or even as your typical grandfathers’ watch. Only few brands master the art of creating a relatively small and classic dress watch. Patek Philippe is one of them, Vacheron Constantin another and with a bit of imagination, Audemars Piguet has a few of them in their collection as well. But none of them really appeal to me, personally. There are other watches in their collections that I would prefer. This Jaeger-LeCoultre Master Perpetual combines being a nice and ‘ultra’ thin design with a complication that I truly admire, a perpetual calendar. 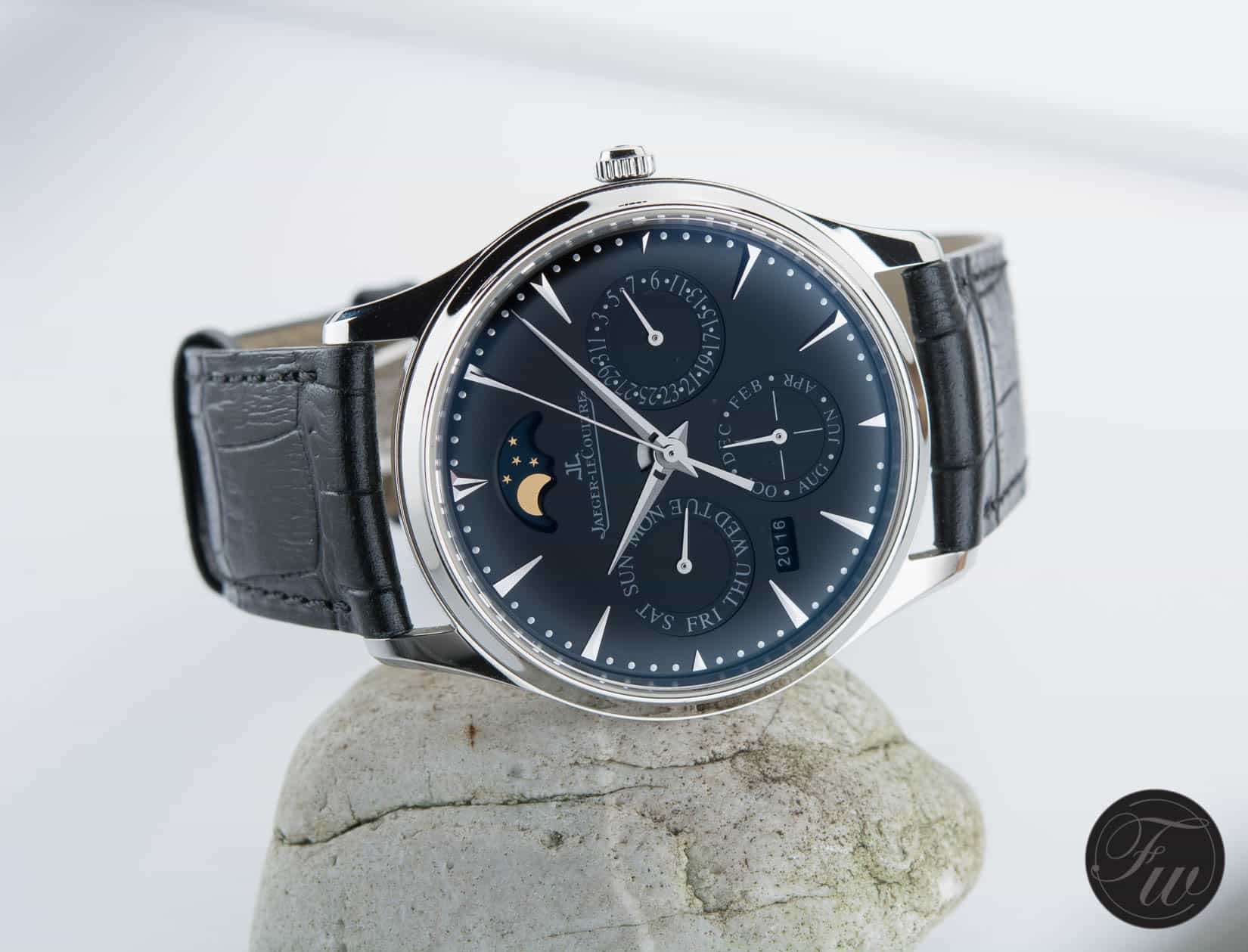 Even though I have fairly big wrists, the 39mm Jaeger-LeCoultre Master Perpetual suits me well. My colleague Gerard owns the former model, in 37mm. The dial lay-out is a bit different, i.e. the configuration of sub dials is rotated 180 degrees. So the moon phases are at 6 o’clock, the month and year indicators at 12 o’clock. The movement in that watch was caliber 889. Gerard told me that he bought that watch when it came out with a black dial, as they were mainly delivered with a silver dial. You can find that specific 37mm model for around 9000 Euro on the pre-owned market today. To me, that’s a no brainer if you want a perpetual calendar under 10.000 Euro, and have to choose between a new Frederique Constant or Montblanc with perpetual calendar or this Jaeger-LeCoultre. However, the 37mm is not for everyone. Not for me at least. So the size of 39mm (and only 9.2mm thick) is perfect for me, even though I have large wrists.

Another thing that intrigues me about this Jaeger-LeCoultre Master Perpetual is its black dial. It is a deep black dial, with beautiful polished applied hour markers and hands. The discs for the year indicator is black as well, with white printed numerals. Much ‘friendlier’ for the eyes than the previous 37mm version, although I could live with that as well. Just above the center pinion, you see another aperture. This is the day & night indicator. The date, days and months are represented in a large font on the dial, which makes it very readable (usable). I had no problems reading the exact date, day and month from the dial. The moon phases aperture is beautiful, with its dark blue sky and gold moon and stars. 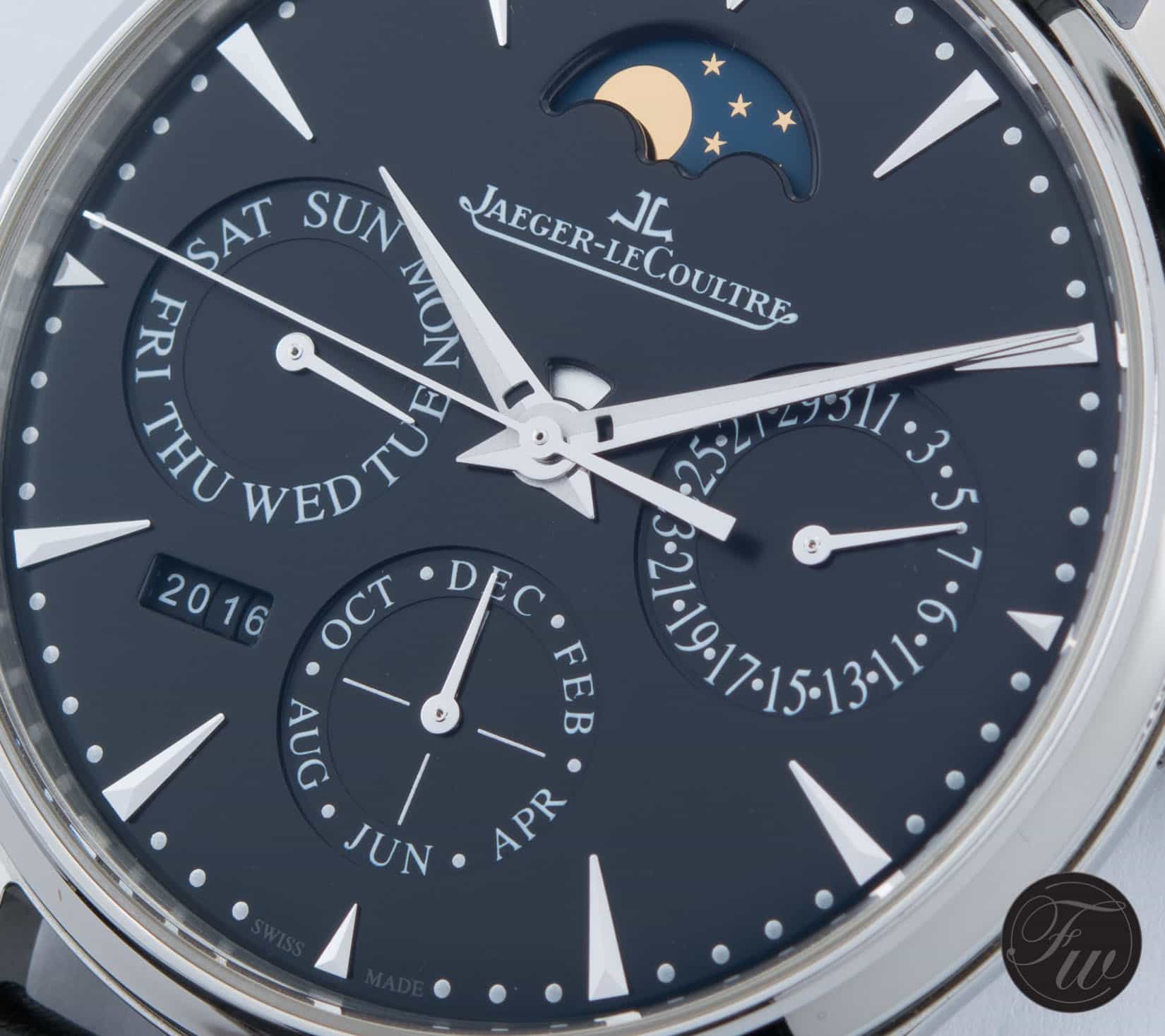 The watchmakers in Le Sentier made life very easy for the lucky ones who will buy this Jeager-LeCoultre Master Perpetual. To set or correct the perpetual calendar, there is only 1 button. You can’t mess up (big time). The only thing you need to take care of is that you don’t set the calendar between 8pm and 4am. Some mechanisms have already been set to motion, and it is better to not temper with it during this event. Also, the little pusher at 8 o’clock that you use to forward the date (the days, months, years and Moon automatically correspond) should be used with care of course. If you push it too many time and advance beyond the current date, there is little you can do except wait for the power reserve to run out and wait for the date that is being displayed. If you really advanced it too far (months, perhaps years), you need to have it fixed by a watchmaker. This movement has no reverse button (some perpetual calendars do have this), so always set the date with care. 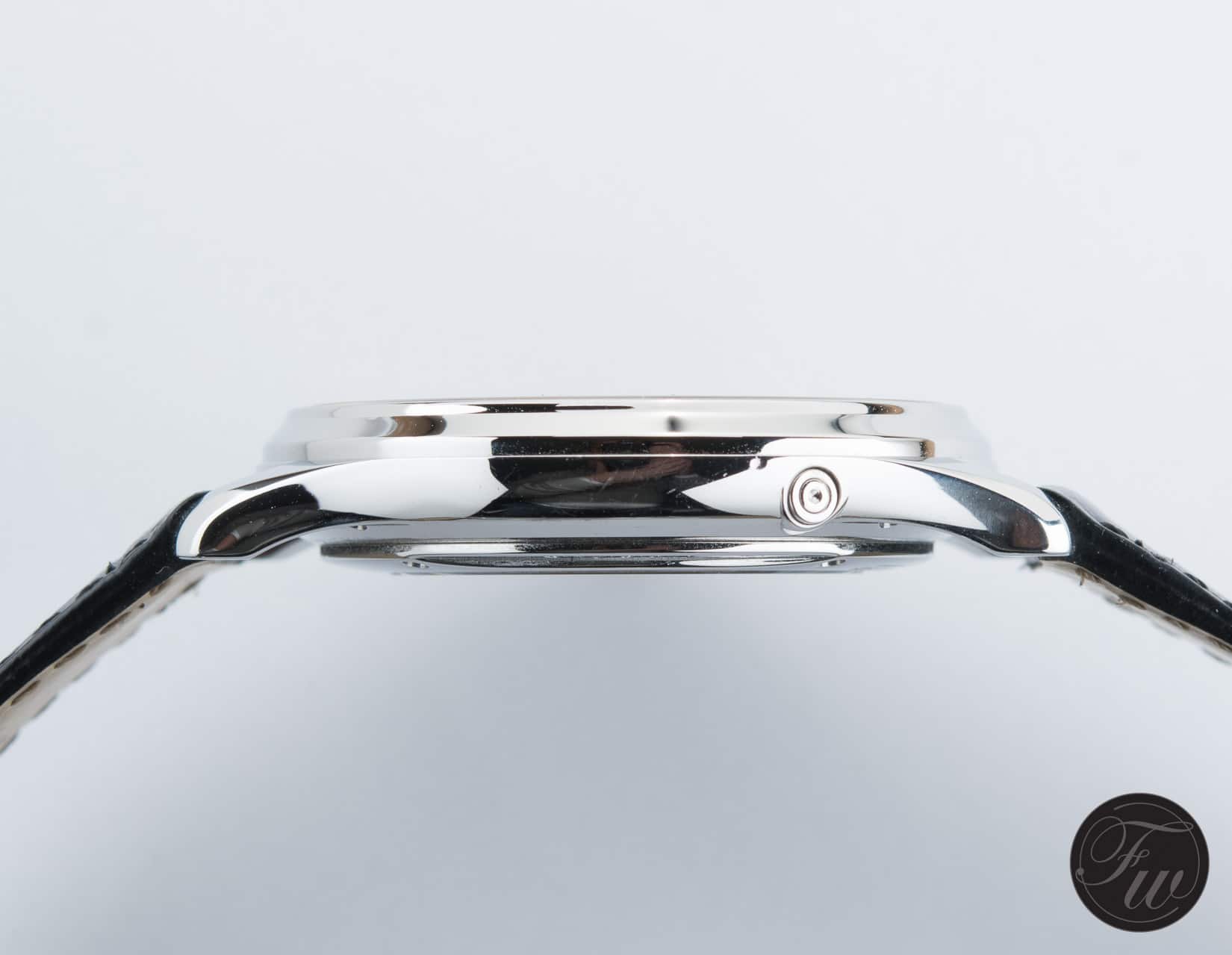 The Jaeger-LeCoultre Master Perpetual itself is quite thin (hence ‘Ultra Thin’ in the official model name) with its 9.2mm. The caliber 868 movement also influenced this ultra thinness of course. Caliber 868(/1) has 336 parts of which 46 are jewels. In total, the movement itself is only 4.72mm thick. The self-winding movement ticks at 28,800vph and has approximately 38 hours of power reserve.

The perpetual calendar complication will run flawlessly till March 1st 2100. After that date, you need to bring it to a Jaeger-LeCoultre watchmaker to make a slight adjustment in the movement.

As you can see below, the movement is visible through a sapphire caseback. It is very pleasing for the eyes, with the gold rotor, striped finishing on the plates and blued screws. 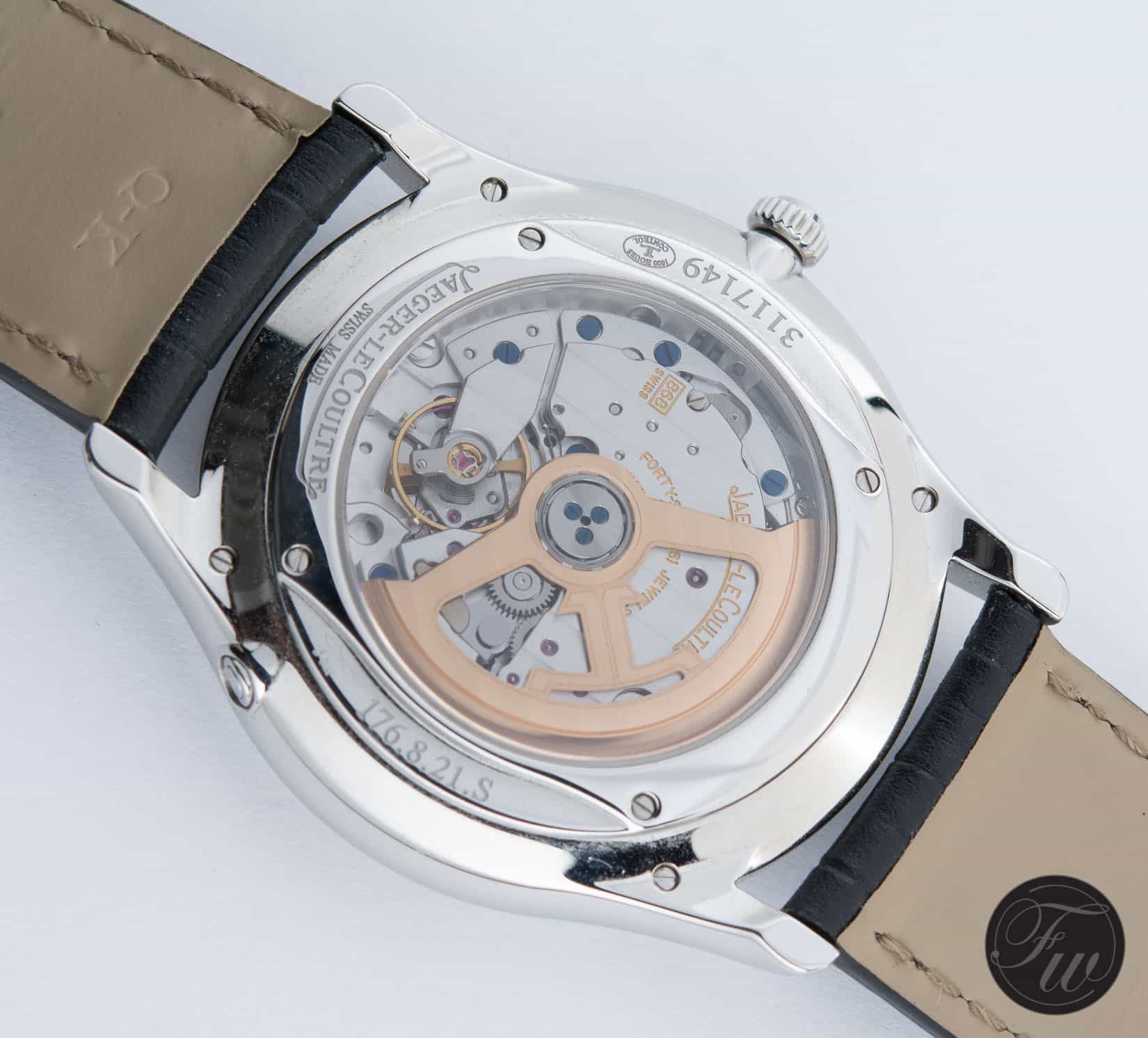 I find it amazing that some brands aren’t capable of attaching the right type of strap to a watch. In a lot of cases, the straps are simply too thick (padded) which can really ruin an elegant watch. Not at Jaeger-LeCoultre. The beautiful black alligator strap is very thin and comfortable from the first moment. Some of our loyal readers might know that I am not a fan of folding clasps, as they tend to be a bit bulky (and thus less comfortable). 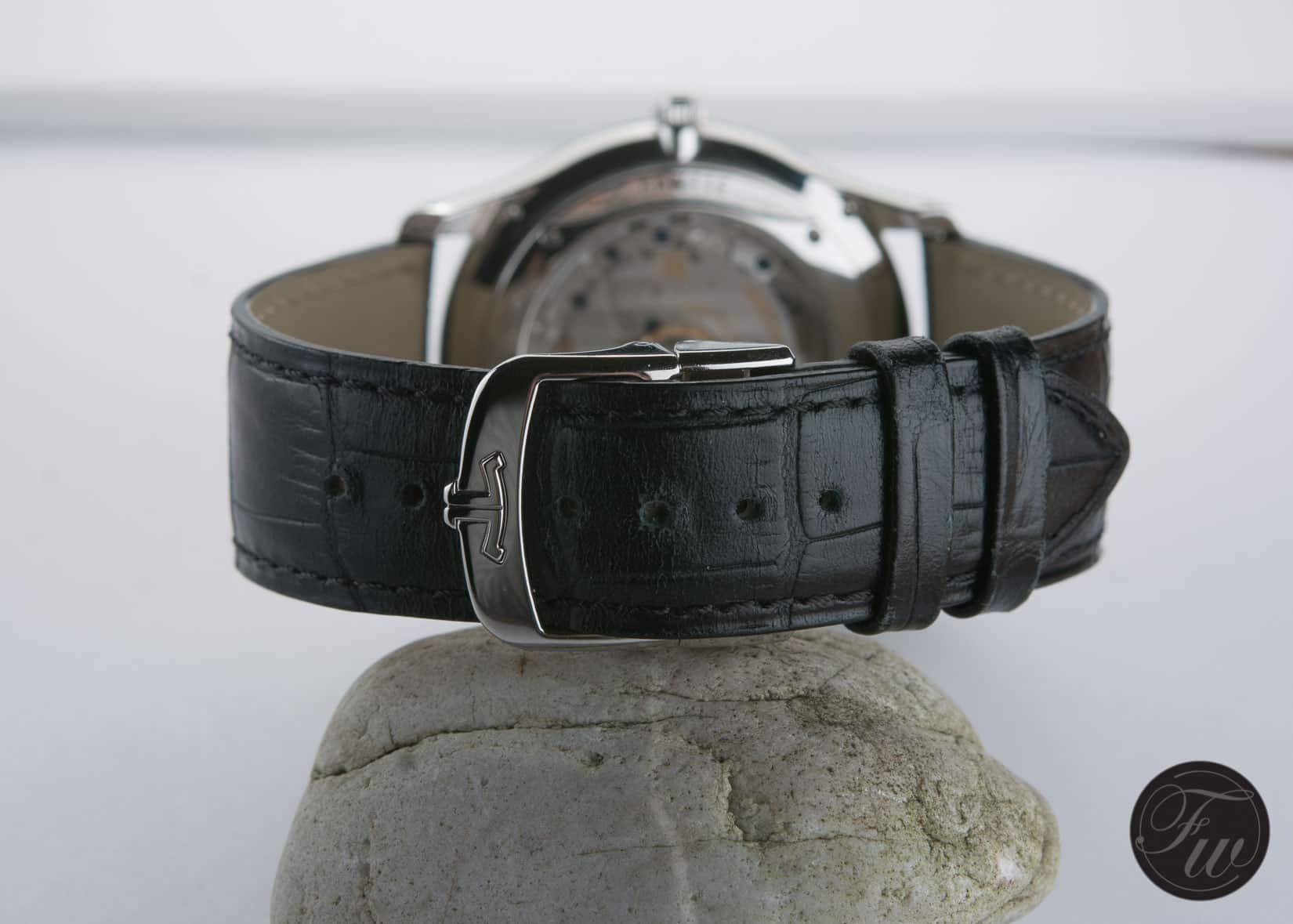 Let me first say that I am in love with this watch. Opposite of what people might thing, I don’t own that many watches myself. I have a couple of vintage Rolex watches, an Audemars Piguet Royal Oak ‘Jumbo’ and I collected a couple of interesting (vintage) Seiko watches and a bunch of Omega Speedmasters. I don’t see myself as a collector other than the Seikos and Speedmasters. All other watches are there to be worn as daily drivers. If I don’t wear a watch, it needs to go. So I really need to like a watch before I pull the trigger on one, even if they aren’t that expensive. The Jaeger-LeCoultre Master Perpetual has a substantial price tag, so it required some extra thought. However, this watch could be one to be on my wrist often and for a long time. It has all the right ingredients.

Still, there are two minor things about the Jaeger-LeCoultre Master Perpetual that I am not particularly a fan of:

The crystal has been treated with anti-reflective coating. Somehow this takes away the unbelievable power of the deep black sun-ray brushed dial, as from some angles there is this blue glare on it caused by the AR-coating. I would have preferred a different AR treatment, where it is as there is no crystal on the watch at all. Sinn SpezialUhren for example, always uses colorless anti-reflective coatings on both sides. However, as I wrote earlier, it is only there under certain angles. It is absolutely no deal-breaker, just something I would rather have seen different.

Position of the Crown

The caliber 868 is a module movement, which means that the perpetual calendar mechanism has been added to a base movement. Nothing wrong with that, may movements with complications have an add-on module for those. However, as a result, the crown is positioned quite low if you look at the profile of the watch. See below. 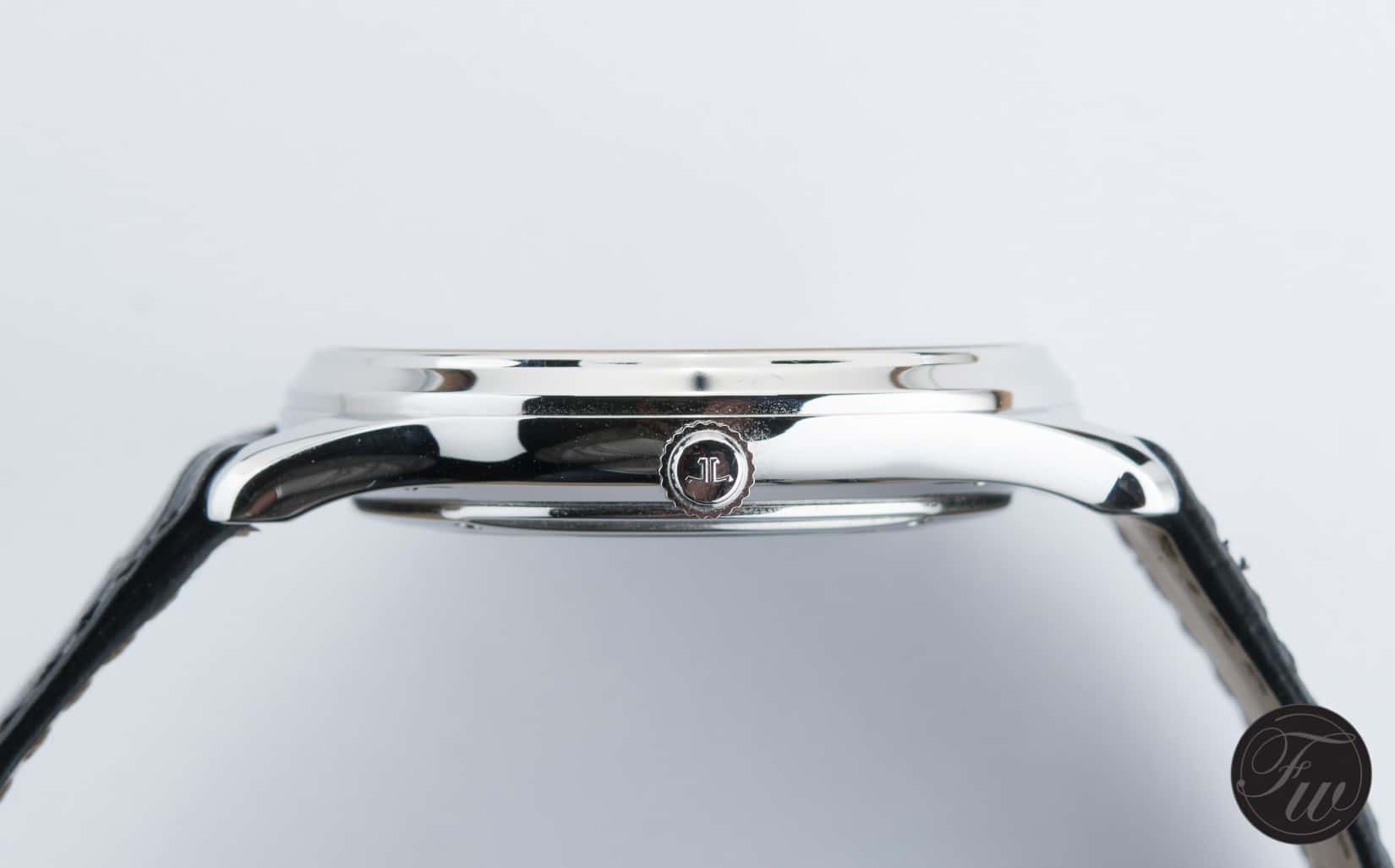 Just a notch, but still. If you look at the watch when it is on your wrist, there is hardly an issue of course, as it is in the center of the case (seen from the top). Just from the sides you will noticed that the crown is positioned lower than normal. Another angle that shows this phenomenon is from 12 or 6 o’clock. Again, see below: 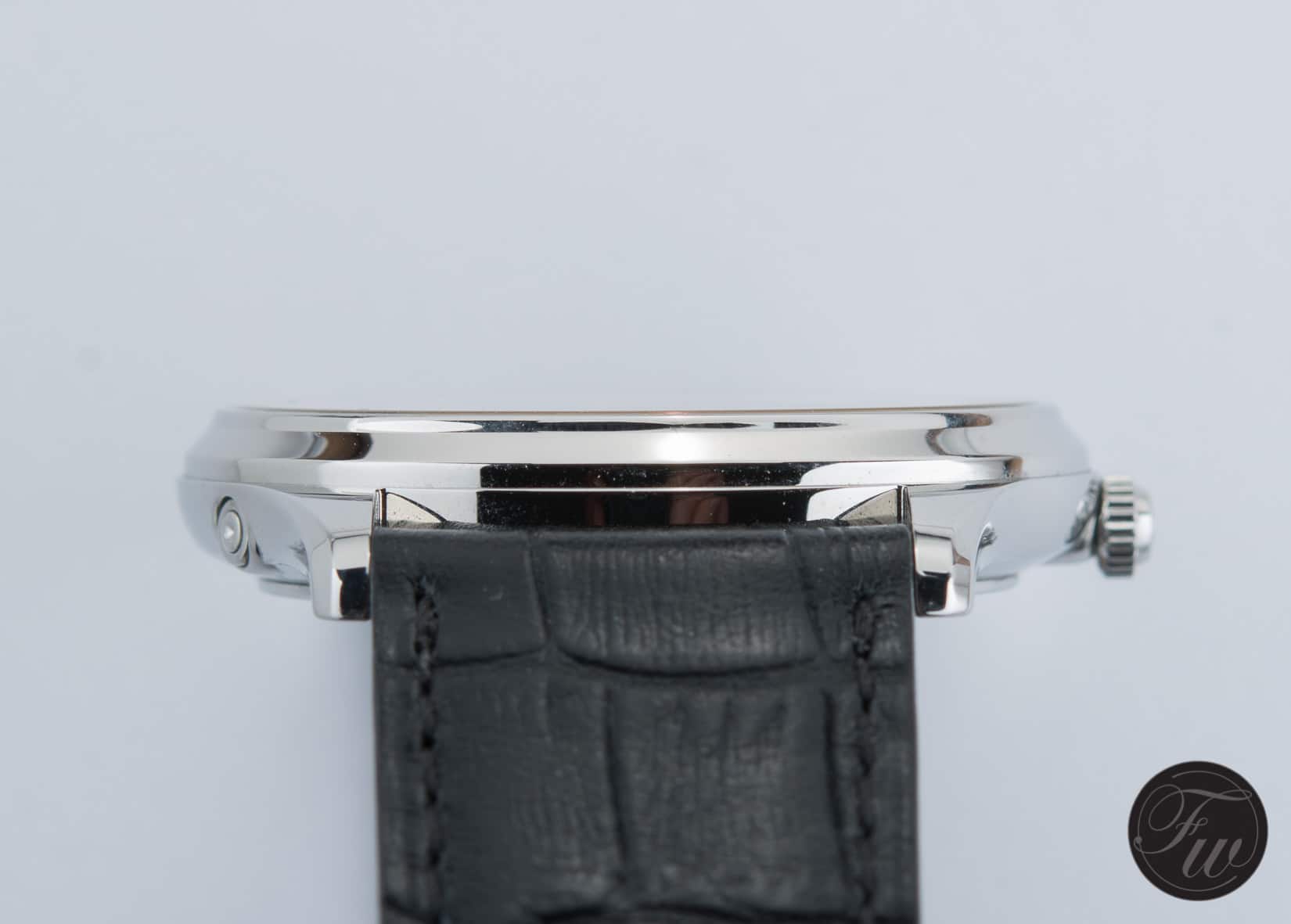 The perpetual calendar is one of my favorite complications, as is a minute repeater for example. I can appreciate a nice tourbillon and there’s no doubt that it requires a lot of watchmaking skills to develop one, something useful like a perpetual calendar or chronograph is what I prefer owning myself. Most perpetual calendars are very expensive, not only because of the complication itself, but also because these ‘high-end’ complications are often accompanied with a watch case in precious metals. To some extent, that makes sense of course. I wouldn’t care for a tourbillon in a steel case to be honest. But for a perpetual calendar, which also brings some usability, it is quite difficult to find a nice one in stainless steel. 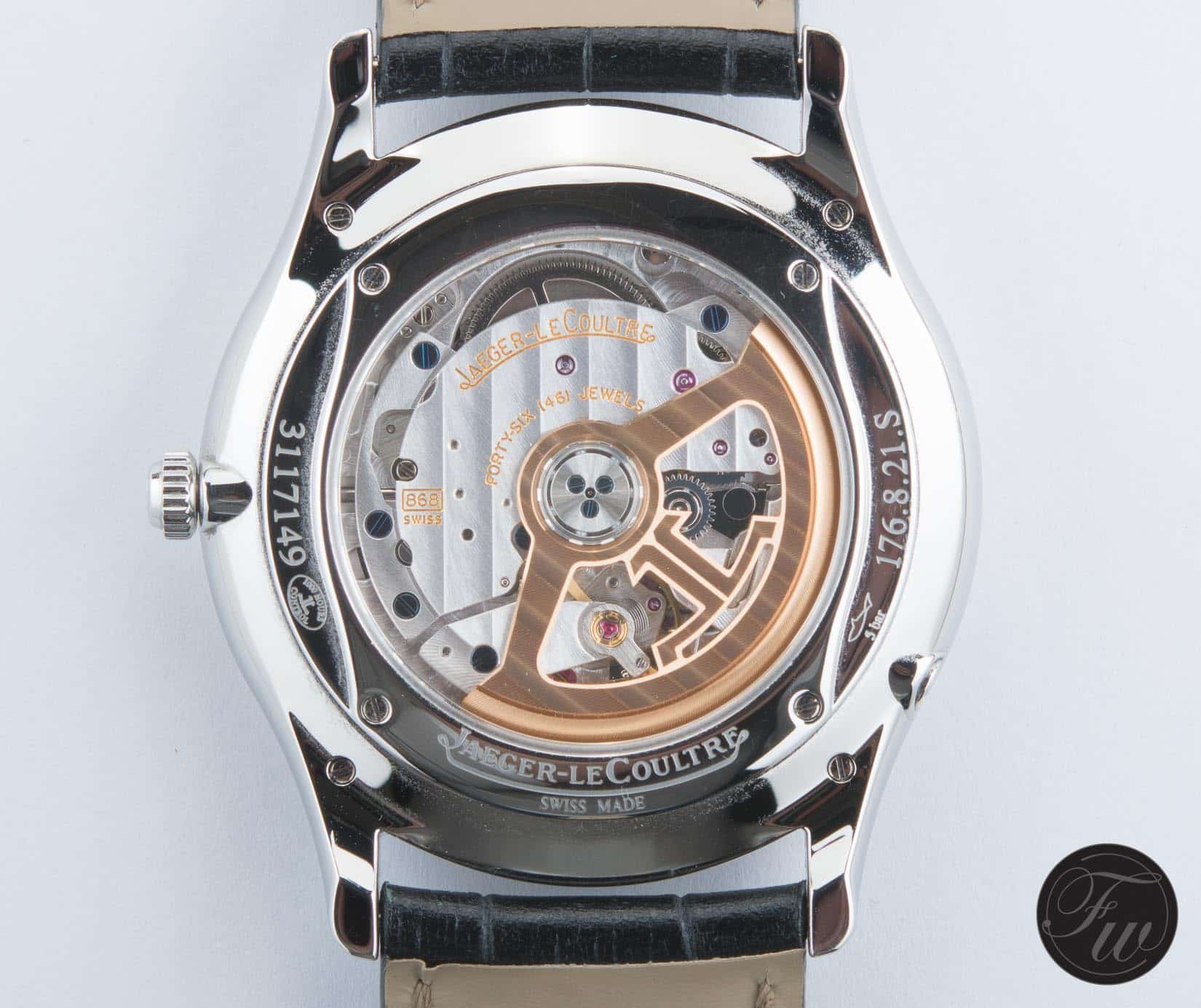 Not only is the perpetual calendar an attractive complication, the watch itself also looks very good. They made their former 37mm Jaeger-LeCoultre Master Perpetual just a bit more up-to-date. Not only regarding today’s size, but also with respect to the design of some dial elements. It has been quite a while ago that I had a watch for review that made me take my calculator out to see if buying one would be feasible. The two small things that I don’t like that much about the watch are too marginal to play a role in taking a decision. This is simply a stunning watch and it will be difficult to get it out of my head.

19.800 Euro remains a lot of money, there are days I have less spare change in my pockets. That said, some watches from the competition that play in the same league give you a watch with just two hands for this amount of money. If you don’t want or can’t spend this amount, I would suggest to either wait before this specific model will hit the pre-owned market or see if you can handle the 37mm predecessor. There aren’t too many of those around though, so I wonder how long it will take before the first Jaeger-LeCoultre Master Perpetual reference 1308470 will end-up in the pre-owned market.

More information can be found via Jaeger-LeCoultre on-line.