Celebrating 90 Years Of The Reverso In Parisian Style — “Reverso: Timeless Stories Since 1931”

An exhibition spanning five floors, covering just one watch model is not something every watch brand can pull off. But Jaeger-LeCoultre can, thanks to its Reverso. The “Reverso: Timeless Stories Since 1931” exhibition in Paris is proof. That’s why I traveled to Paris to see how Jaeger-LeCoultre puts its past and present Reverso watches on display.

This year, Jaeger-LeCoultre celebrates 90 years of the Reverso. The watch that is named after the ninetieth birthday is the Tribute Nonantième, but to capture nine decades of Reverso in one watch is impossible. That’s why the brand decided to put together a grandiose exhibition at one of Paris’ most prestigious locations, the rue du Faubourg Saint-Honoré. But why Paris? The answer is quite simple. The Reverso debuted in 1931 at the height of the Art Deco era, and it was in Paris where this movement of architecture and design appeared in the early 20th century. Art Deco gets its name from the “International Exposition of Modern Decorative and Industrial Arts” that was held in Paris in 1925. Interestingly, the name Art Deco was only used for the first time by art historians in the late 1960s. 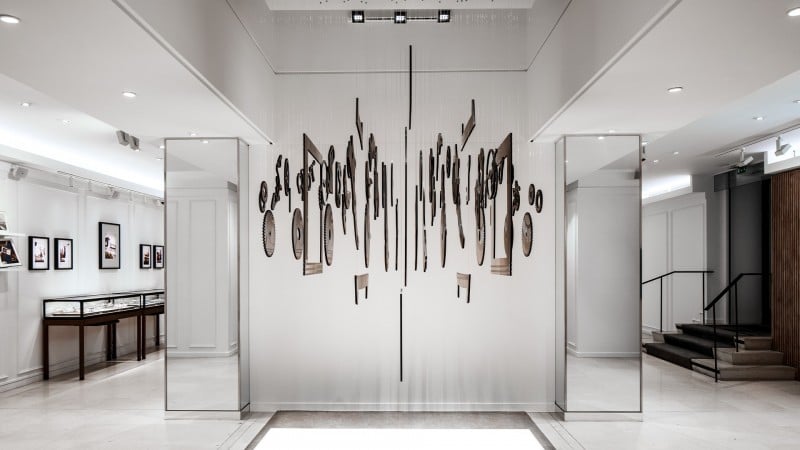 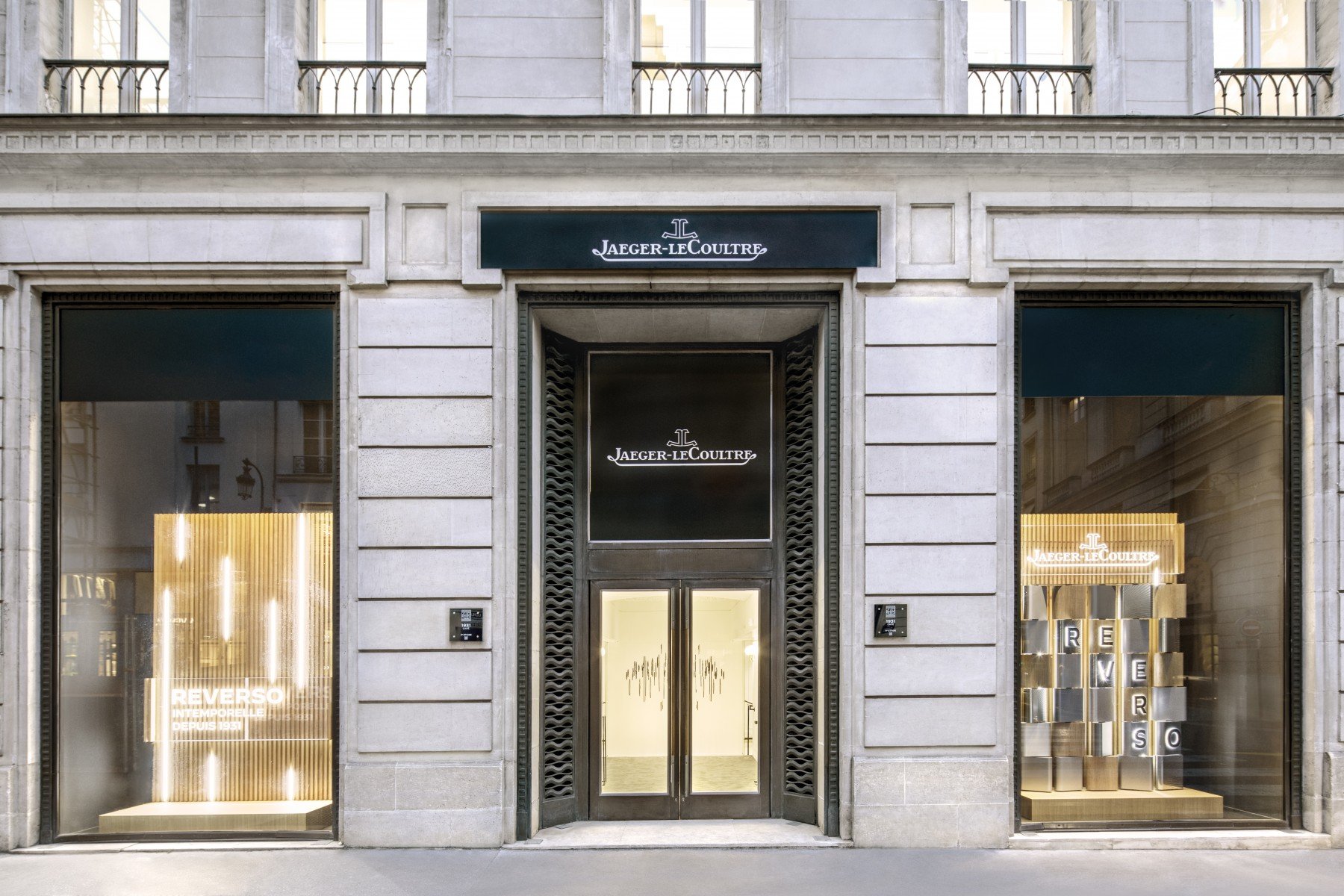 Jaeger-LeCoultre Reverso in Paris — a feast for the eyes

When you think of Art Deco, you have to imagine bold, geometric forms and bright colors. You also have to feel the luxury and modernity of that futuristic, ground-breaking style. You can also think of the Reverso, a watch that, with its geometrical yet streamlined shapes and no-nonsense decoration, broke free from traditional watch conventions.

… the design shows that the watch emerged in a world where Art Deco was the norm.

The Reverso is a veritable Art Deco creation, and on top of that, a symbol of style and elegance. It is, in a way, Parisian chic and represents the French art of living. Sure, the watch was designed for British polo players. The design, however, shows that the watch emerged in a world where Art Deco was the norm. And that’s not a bad thing because Art Deco transcends both time and trends. The same can be said of the ninety-year-young Reverso. 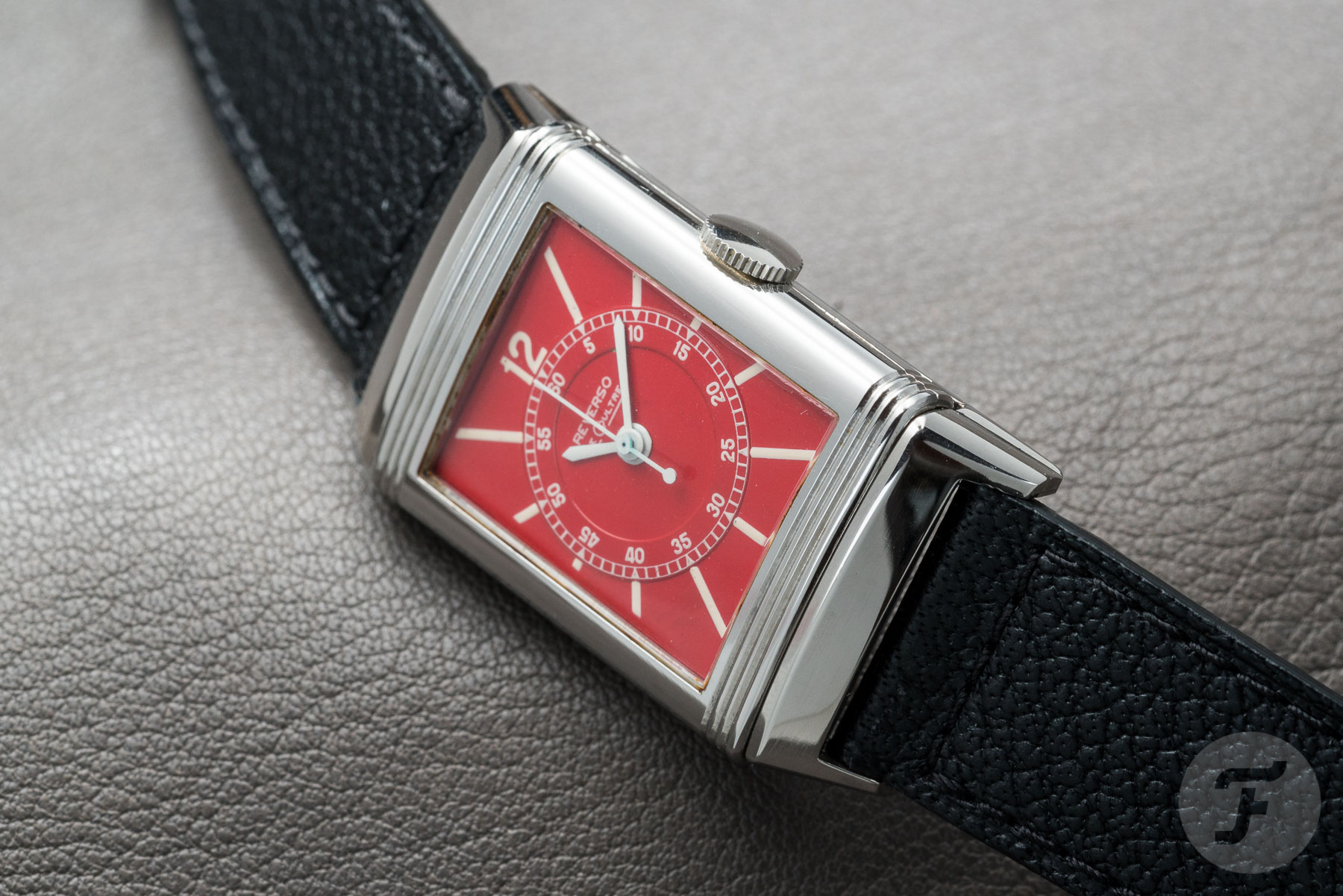 A “sliced” and a vivid red Jaeger-LeCoultre Reverso from 1931

The “Reverso: Timeless Stories Since 1931” exhibition starts in spectacular fashion, with an art installation from the American artist Michael Murphy. It’s a large “sliced” Reverso that is stretched out to create an almost confusing (but certainly fascinating) three-dimensional view of the star of the show. The exhibition is a retrospective. It brings to life the history of the Reverso through four different themes, from its origins to the present day. The selection of Reverso models is breathtaking. My favorite one of the show is an early 1930s model with a bright, almost neon red dial. It’s radiant and vivid, and it would not look out of place in the present-day catalog. 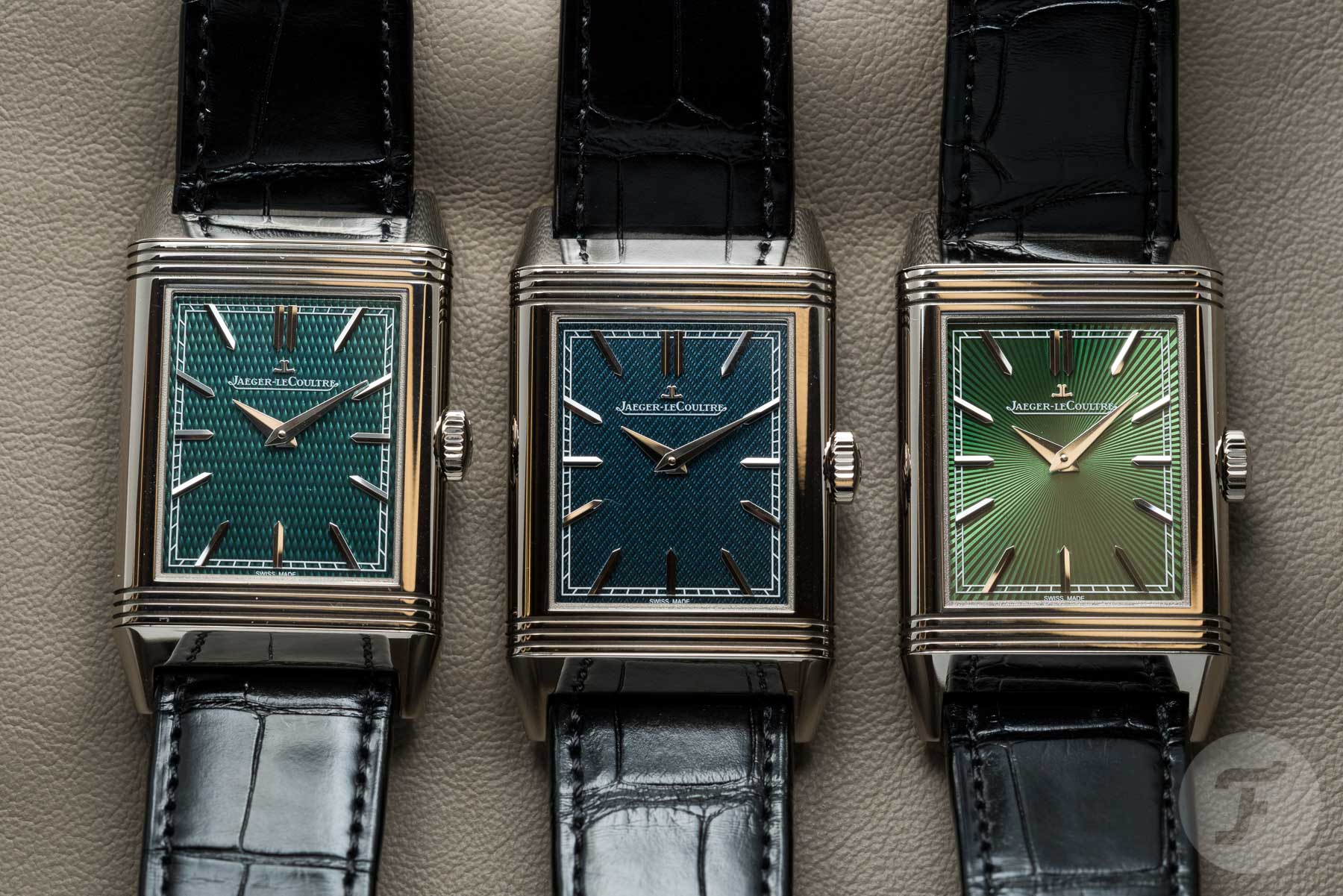 The Reverso is the perfect canvas

Normally, when I visit an exhibition, I go for the paintings. In the case of the Reverso watch exhibition, however, I also went for the pictures. And that’s because the Reverso is the perfect canvas. In an earlier story about the Reverso, I mentioned the Rembrandt and Mondriaan editions. Both watches feature a micro-painting done by hand in Jaeger-LeCoultre’s Atelier Métiers Rares in Le Sentier. From that same department in the manufacture comes the Reverso Tribute Enamel Hidden Treasures. It’s a trio of watches that celebrates the work of three great masters from the dawn of Modern Art: Gustave Courbet, Vincent van Gogh, and Gustav Klimt. To bring the paintings to life, the artisans at JLC used grand feu enamel, miniature painting, and guilloché made with the help of century-old, hand-turned machines. 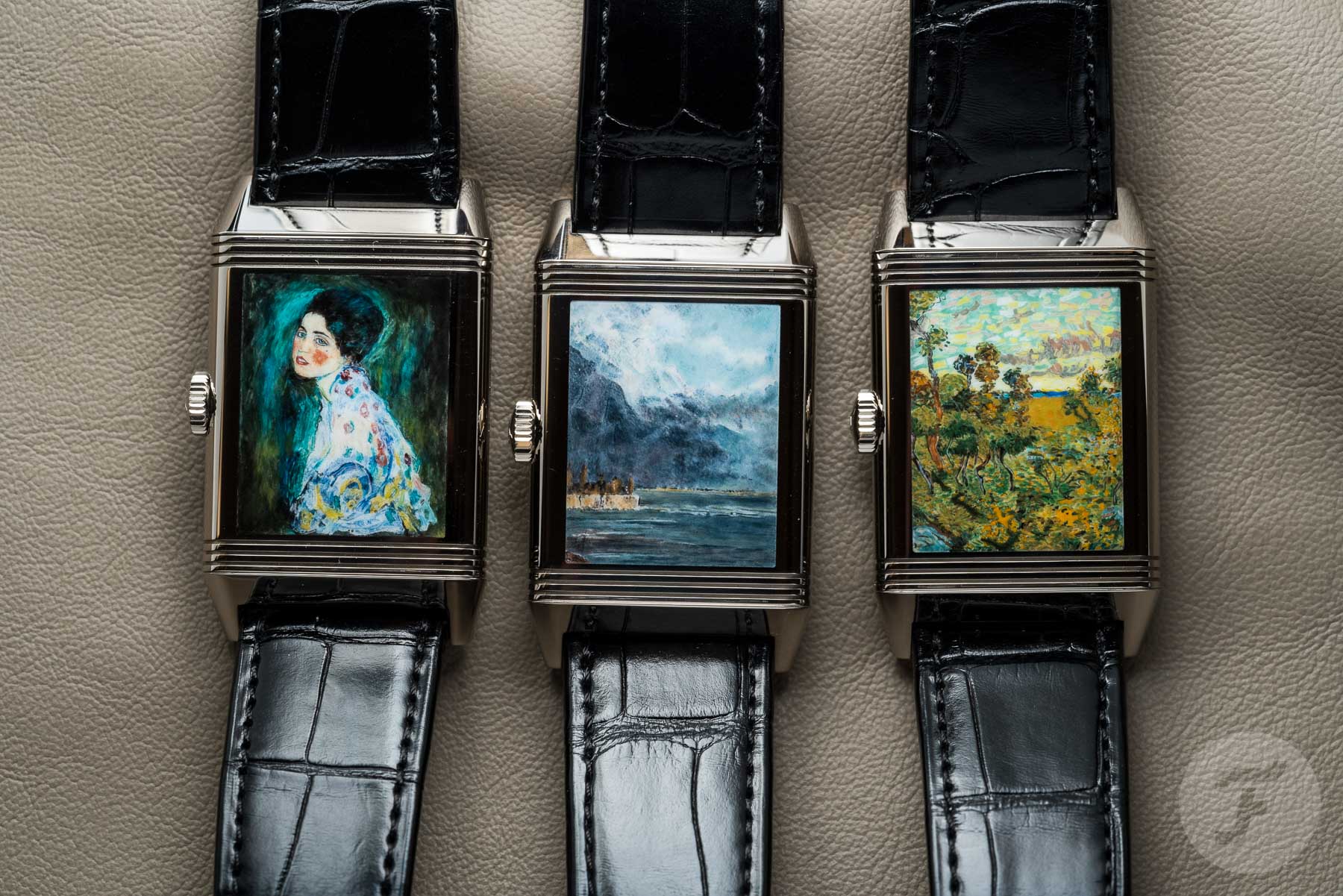 The dials of the Reverso Tribute collection stay very close to the 1930s originals, showing a subtle guilloché pattern and three shades of misty blue and green. The color of each dial hints at the colors used in the painting on the back. What you find on the reverse is one of three “lost” paintings. Its art thought destroyed, lost, missing, looted, or non-visible for other reasons, until rediscovered and authenticated in recent years. The paintings really fit the spirit of the reversible watch. Turning your “ordinary” watch over, out of the blue, an extraordinary and unique painting appears. 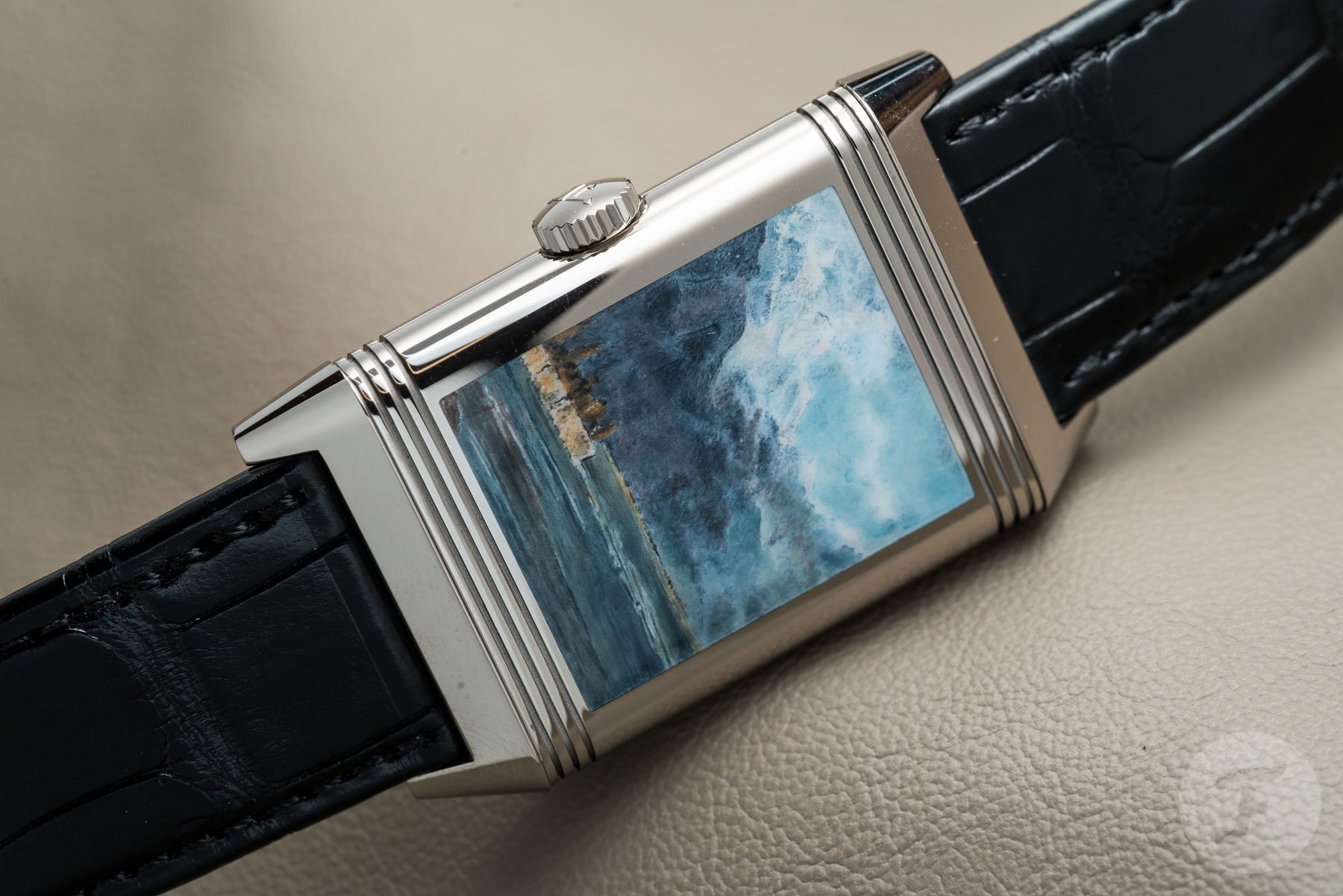 First up is the Reverso with a softly shimmering blue dial. On the front, it features a subtle herringbone guilloché texture and Gustave Courbet’s “View of Lake Léman” (1876) on the back. The painting is a fine example of 19th-century Realism, with its atmospheric capture of the movement of the clouds and the sunlight on the surface of the lake. 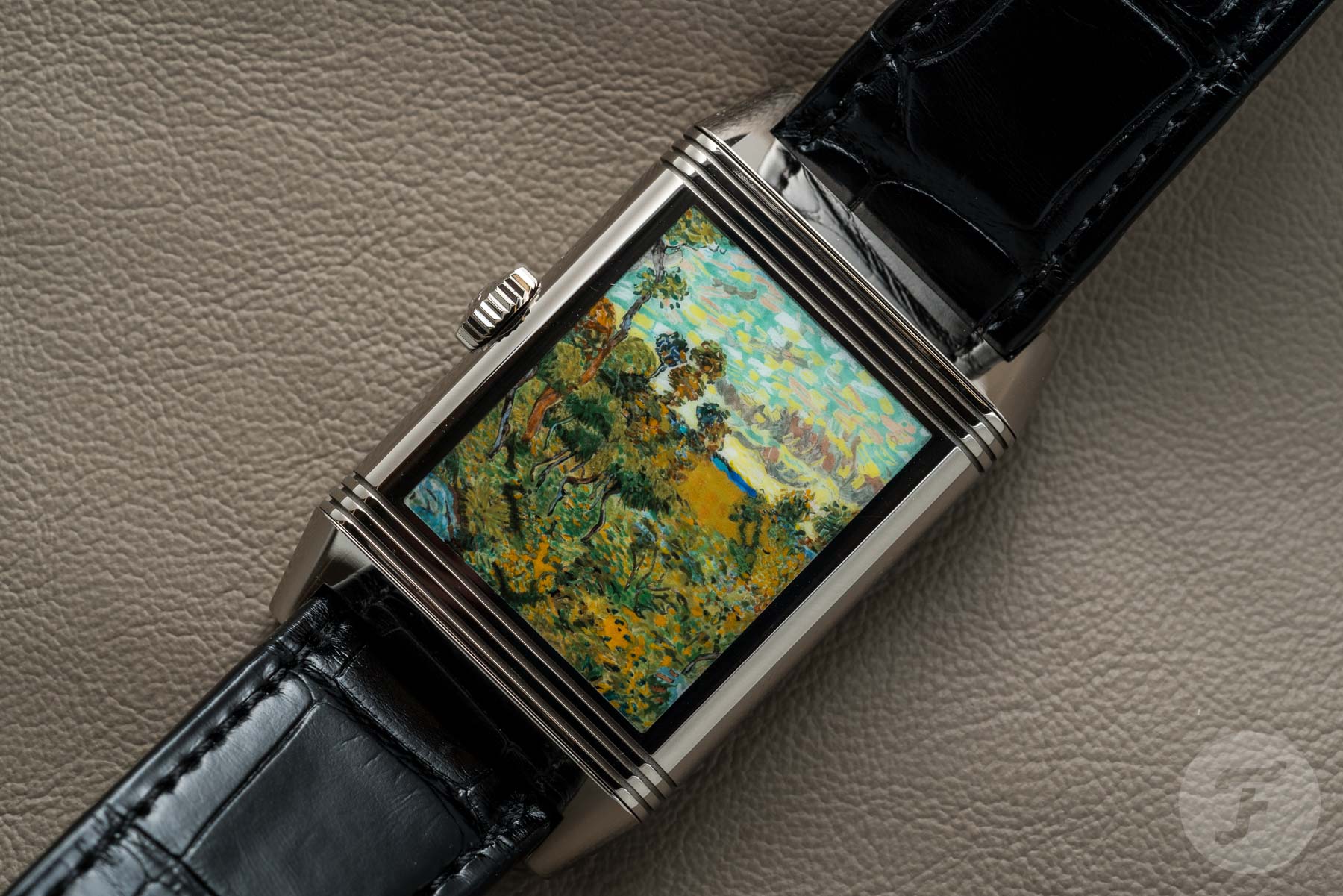 If you’re a fan of Post-Impressionism and Vincent van Gogh, there’s the Reverso with “Sunset at Montmajour” (1888) hiding on the back of this green-dialed watch. Van Gogh captured the distinctive vegetation of Provence and the rich colors of the “golden hour” just before sunset. The colors of nature carry on to the front, in the distinctive shade of green enamel chosen for the sunray guilloché dial.

The most expressive and experimental watch of the three Reverso Tribute Enamel Hidden Treasures is Gustav Klimt’s “Portrait of a Lady” (1917). The story of the picture is dramatic and captures the imagination. The Viennese artist fell in love with a young woman who became his muse. But when she suddenly died, he tried to ease the pain of his loss by painting over her depiction a portrait of a different lady. The green dial, decorated with grand feu enamel over a fine barleycorn guilloché pattern, evokes the background of the portrait. 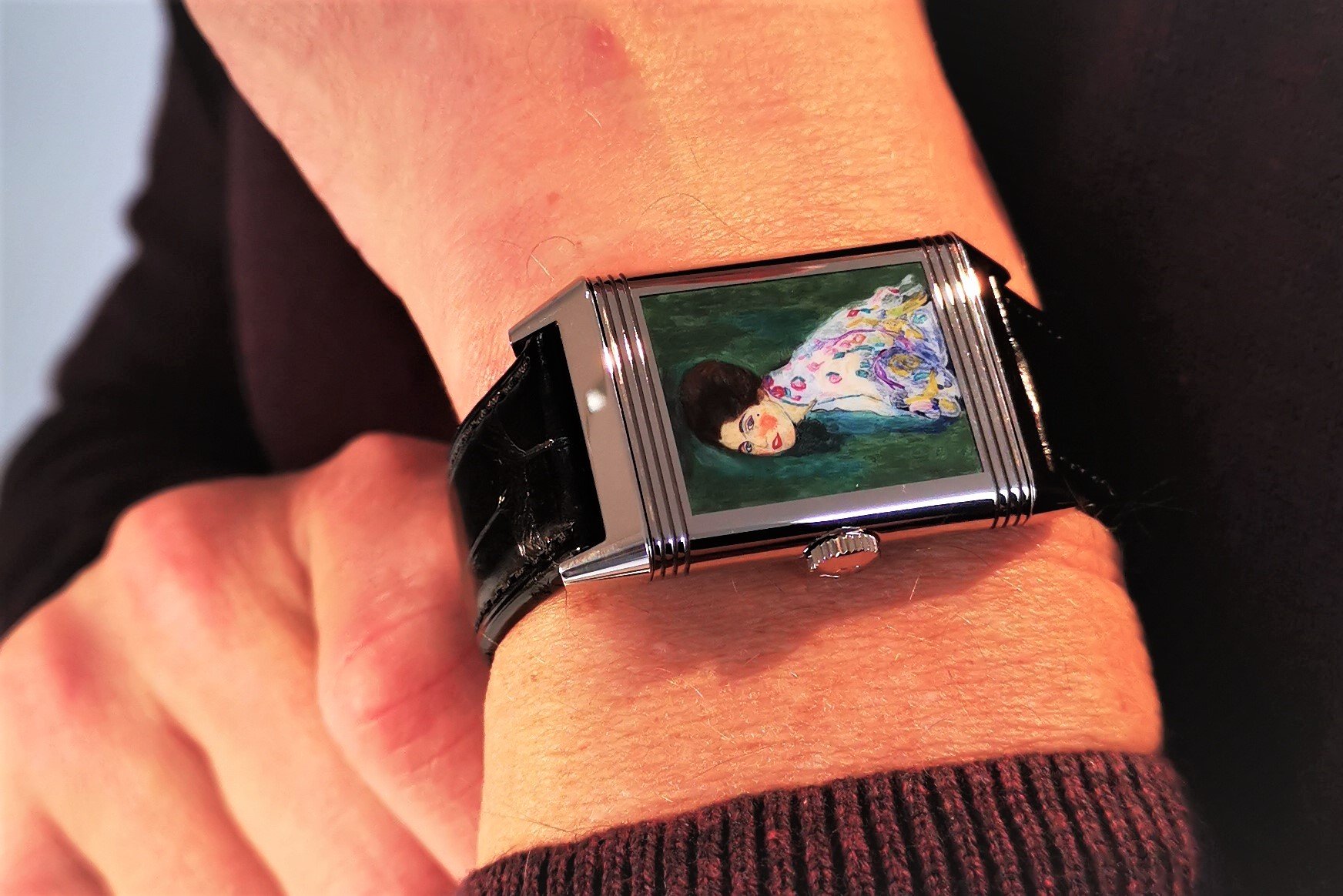 The three Reverso Tribute Enamel Hidden Treasures are limited editions of 10 pieces each. All 30 watches are the epitome of the art of miniature painting. But they’re also “just” watches. Each of the Reverso Tribute Enamel Hidden Treasures contains the manually wound caliber 822/2, with 42 hours of power reserve. The white gold cases measure 45.6 × 27.4mm, with a 9.73mm thickness. The black alligator straps make it possible to wear these miniature pieces of art on the wrist. But only after paying $107,000 for the piece of your liking. 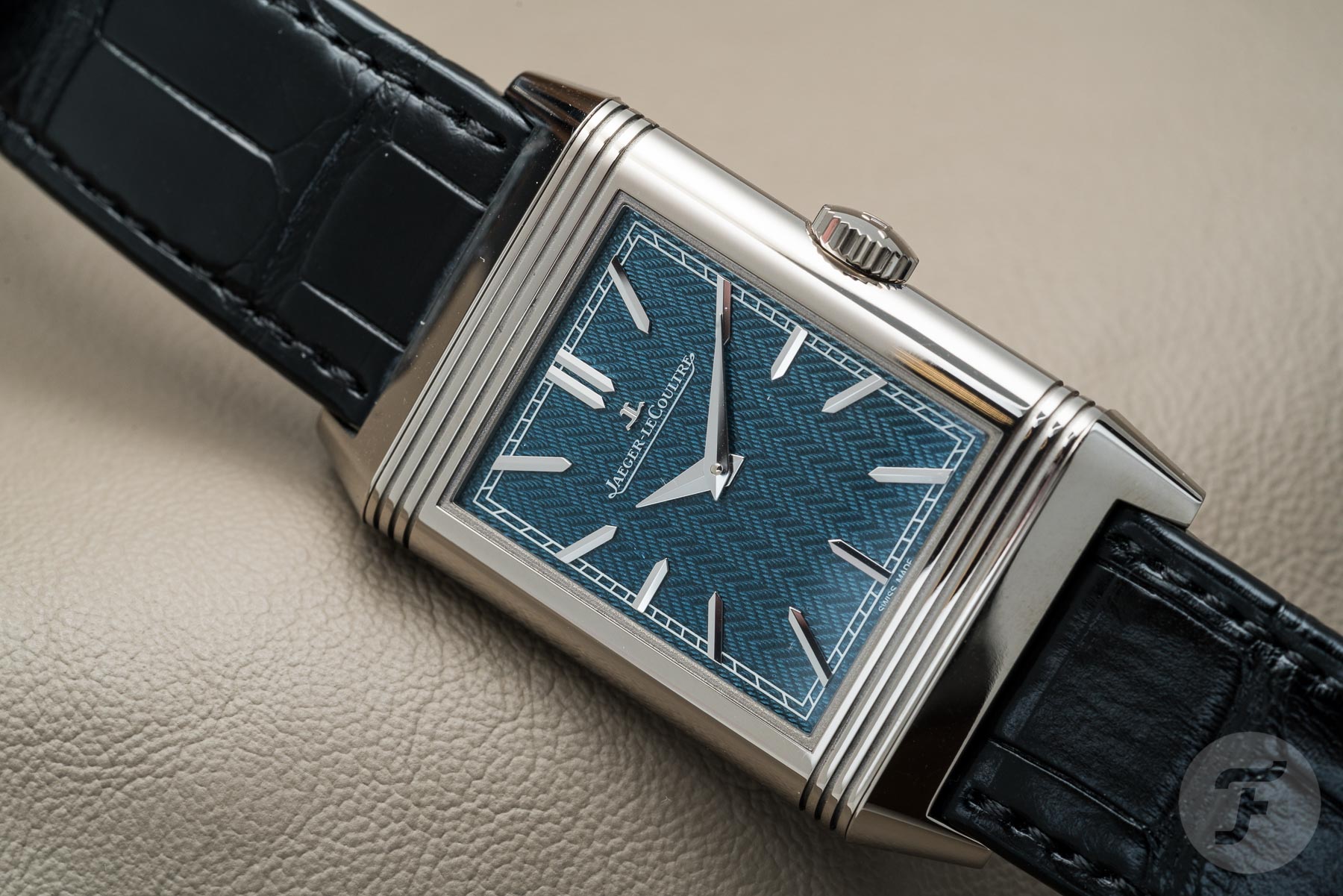 When you visit “Reverso: Timeless Stories Since 1931,” you get to see both the very first and the last Reversos with enameled case backs. The first one was commissioned by a client in 1936. The case back of the watch features a delicately detailed portrait of a woman, who is presumably a maharani. What this very first enameled Reverso and the latest series have in common is timelessness, not only because of the quality of the art but also because of the quality of the “canvas”.

The enameler’s talent must not only equal that of the original artist. He must also be able to reduce art to a tiny scale. And apart from that, reproducing the original colors in enamel pigment is a skill that borders on alchemy. That’s because you can’t exactly predict what the outcome will look like until actually firing the painting in the oven. The artisan’s judgment, based on years of experience, is absolutely crucial. 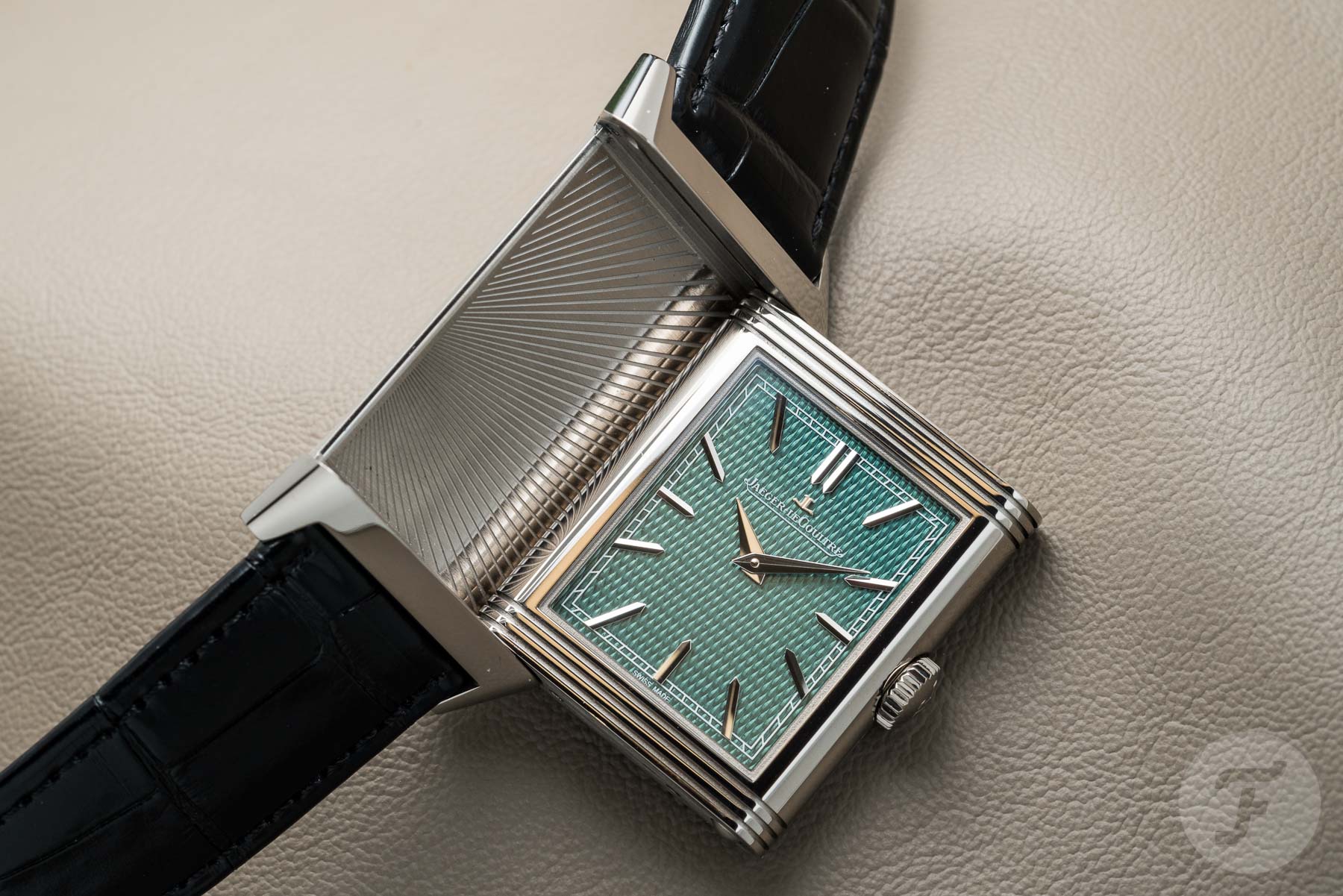 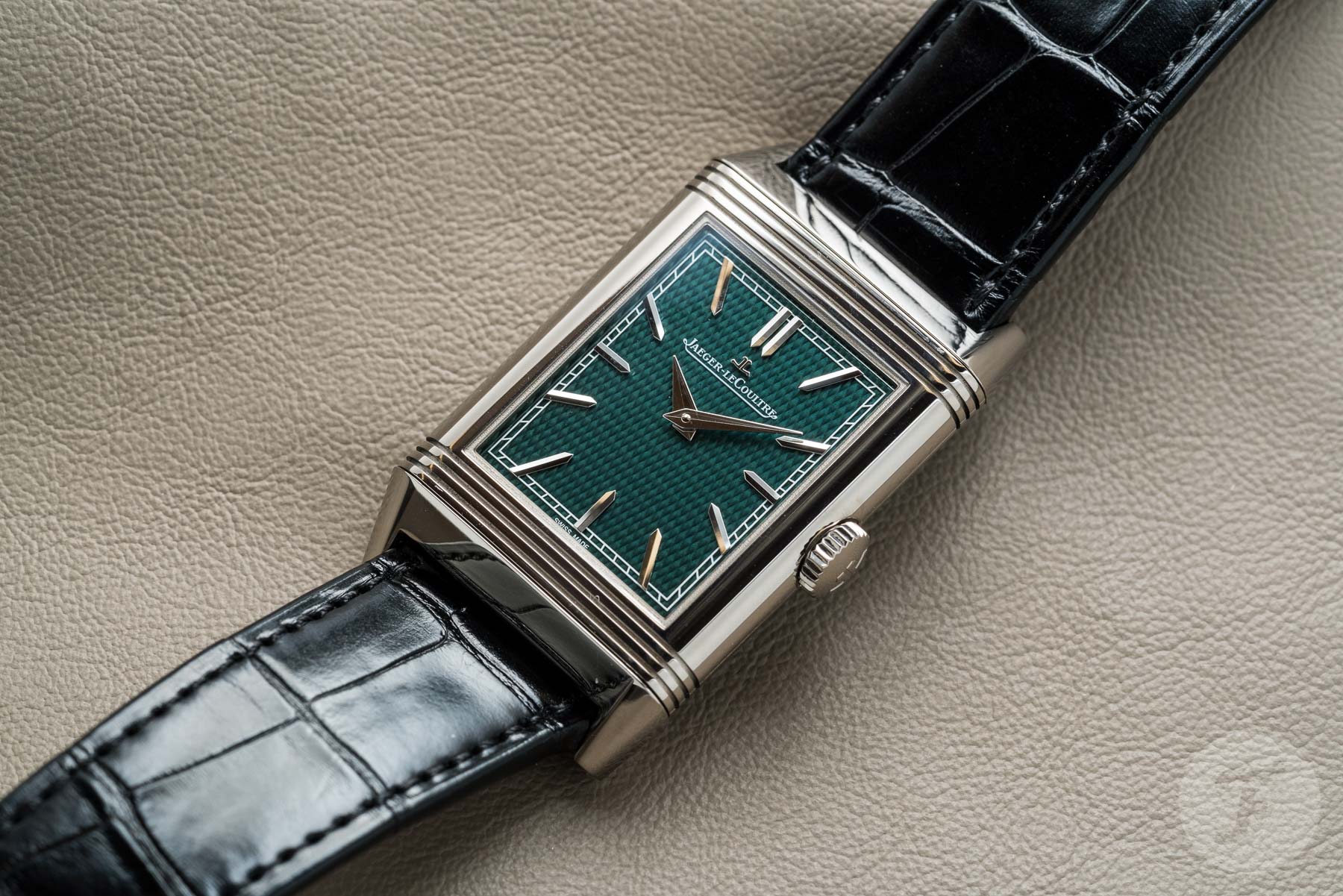 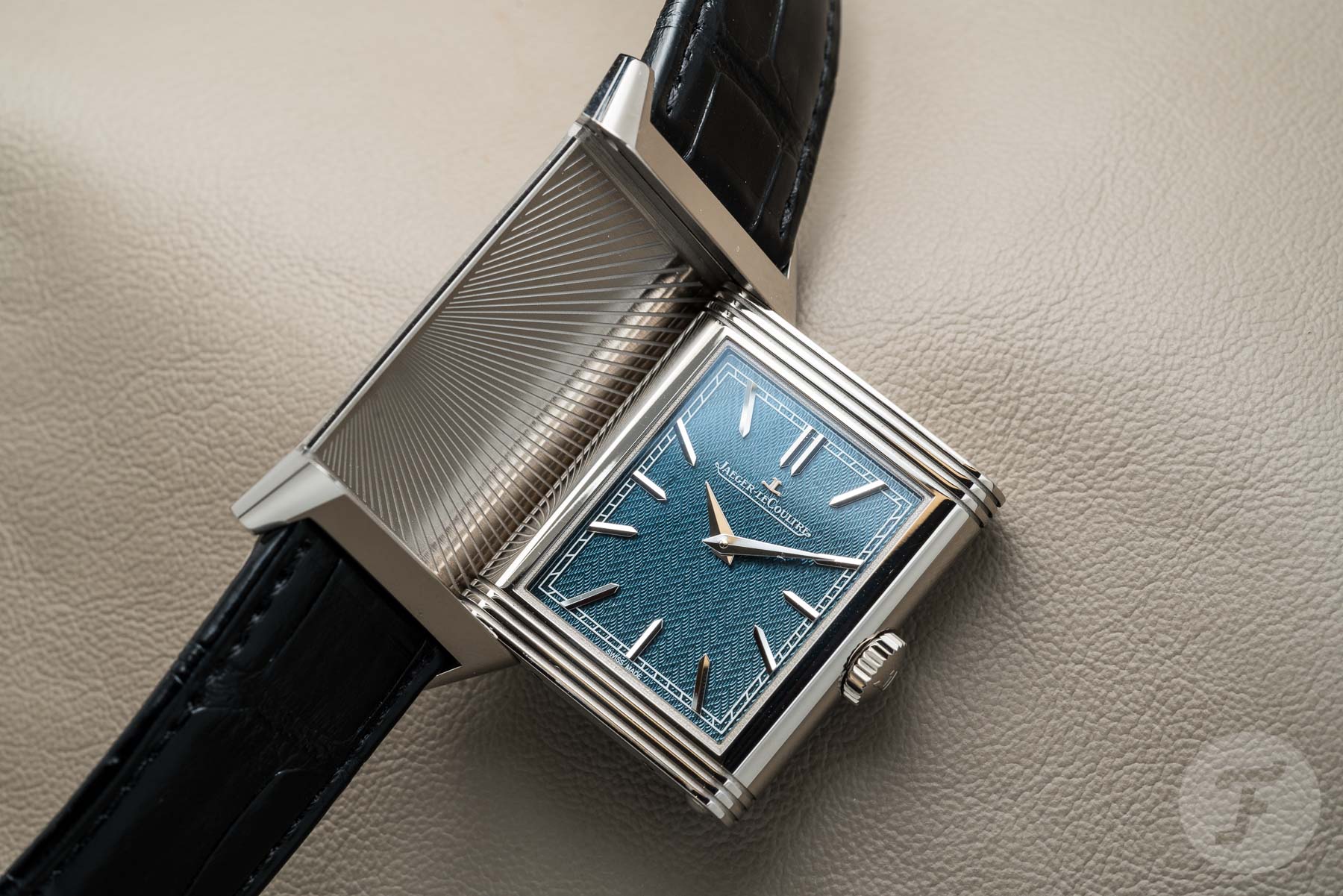 It’s definitely worth visiting the “Reverso: Timeless Stories Since 1931” exhibition. It’s incredible to see that a 90-year-old watch continues to look fresh. And it’s also a reunion with extraordinary models from the ’90s and ’00s. I promise you many an aha-erlebnis when coming across yet another “forgotten” Reverso. And while you’re at it, don’t forget to go to the top floor and try the sweets and cakes in the 1931 Café. It’s Parisian pastry chef Nina Métayer that baked the sweets and cakes. She uses ingredients from the Vallée de Joux where Jaeger-LeCoultre is from. The results are delicious, and both the decor and the pastry are in stylistic harmony with the Reverso’s Art Deco background. 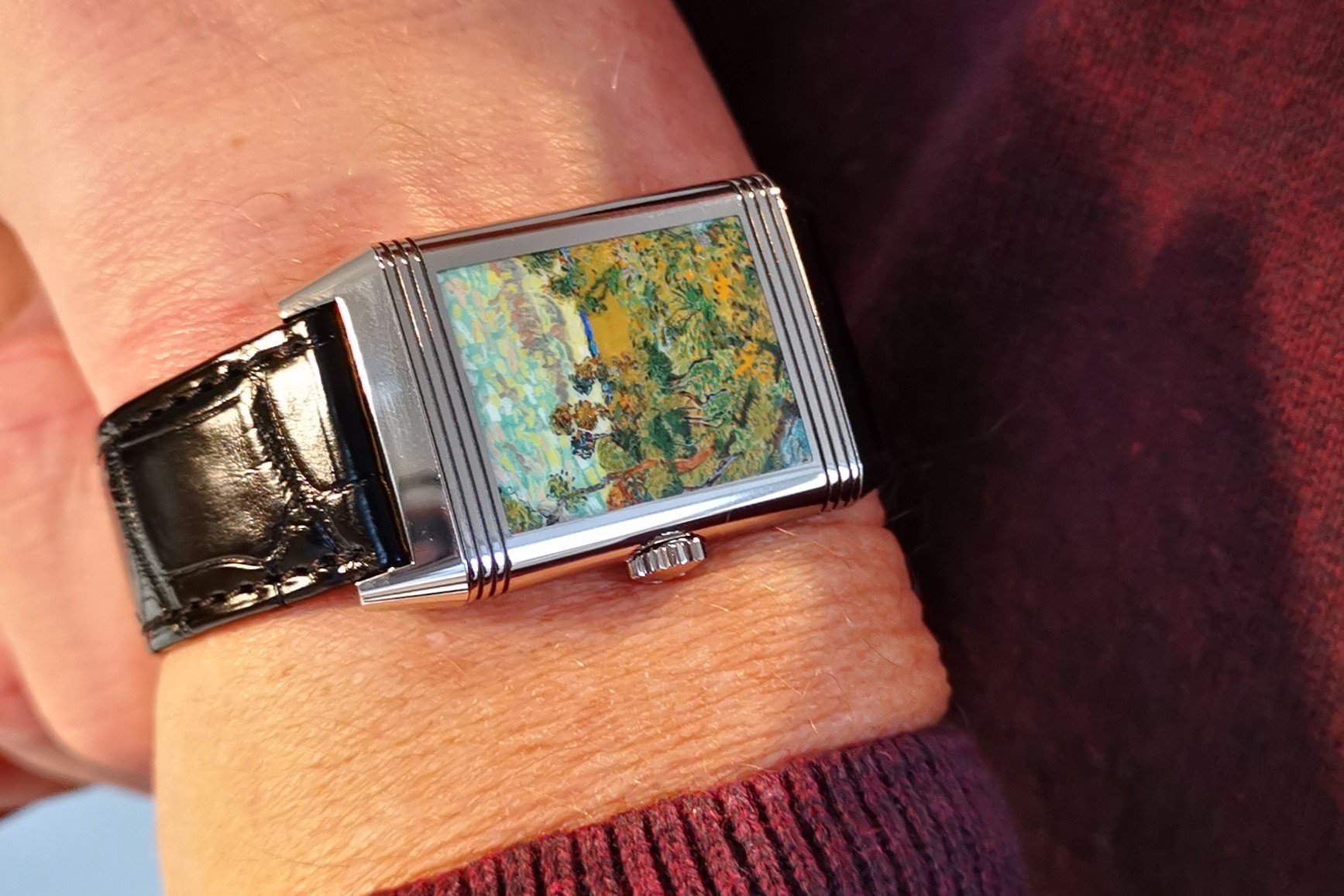 Both the exhibition and the café are open Tuesday to Saturday until December 24th, 2021. Just set your navigation for 15 rue du Faubourg Saint-Honoré in the 8th arrondissement of Paris. Entry to the exhibition is free to the public. Reservations are recommended and can be made on this special website. To make the world of the Reverso more accessible to everyone, audio guides are available for the exhibition as well.

More information about the current Reverso collection can be found on Jaeger-LeCoultre’s official website.

Hot Topics
Introducing: The Omega Speedmaster Super Racing With Spirate System
162 comments
Design Vs. Specs — Which Is More Important To You When Buying A Watch?
86 comments
The Time To Buy Is Now: How The Current Economic Climate Influences Watch Buying And How You Should React
51 comments
My Predictions For New Omega Speedmasters In 2023
48 comments
A Regret-Free Guide To Buying Your First Luxury Watch — Part Three: Higher-End Options From Omega, Rolex, Grand Seiko, And More
48 comments
Popular
You Asked Us: Tissot Powermatic 80 Seastar 1000 or Longines HydroConquest
Robert-Jan Broer
20
Seiko Tuna For The Rest of Us
Gerard Nijenbrinks
13
Vintage Breitling: the Expert Interviews
Michael Stockton
11