Ninety years ago, Jaeger-LeCoultre created the Reverso. It was an ingenious solution for polo players who wished to protect the glass of their watches while playing matches. The watch became the backbone of the Le Sentier-based manufacture. The most recent execution is the stunning Jaeger-LeCoultre Reverso Tribute Nonantième. This pink gold two-faced watch celebrates the ninetieth birthday of the Reverso in a complicated yet elegant way. And it also doesn’t lack originality.

How do you like your Reverso? As a time-only watch with a solid case back like the recently presented green Reverso Tribute Small Seconds? And where do you stand on complications in a Reverso? Proper complications like a version with tourbillon or minute repeater I mean. And what about the most complicated Reverso ever to see the light of day? The recently launched four-sided Hybris Mechanica Calibre 185. My personal taste leans towards the simpler versions. I like a two-faced Reverso with a second time zone that takes full advantage of the design. However, adding tourbillons and minute repeaters to a polo watch is a bit too much for me. It is perhaps a tad difficult to explain historically. But maybe that’s just me. 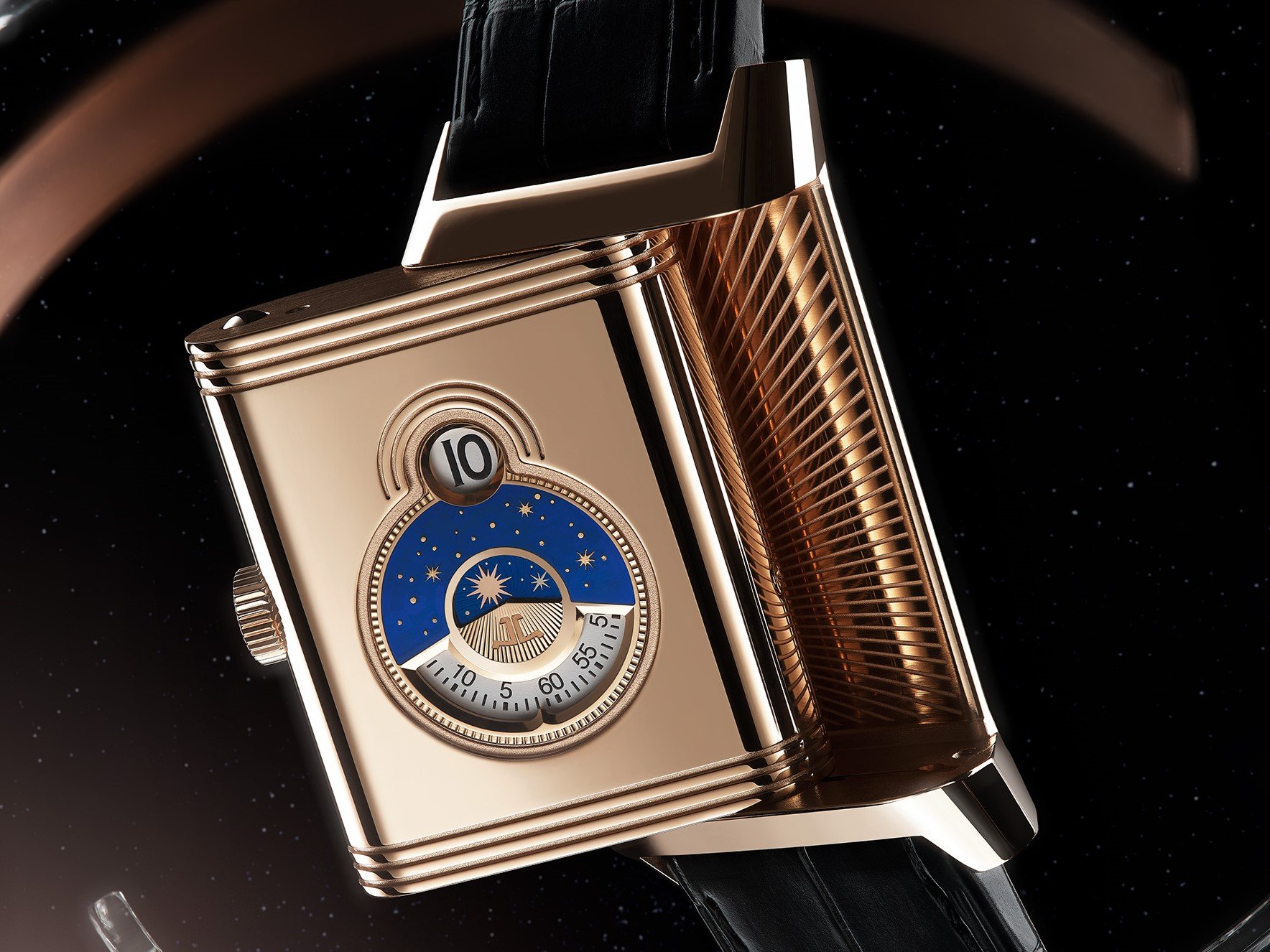 But that doesn’t mean the Reverso has no history in complications. Take the Nonantième, a direct descendent of the newly-presented Soixantième. That watch debuted in 1991, sixty years after the Reverso’s creation. The manufacture’s goal was to create six new Reverso complicated models within the decade — from the tourbillon to the minute repeater or the quantième perpetuel, each incorporating the greatest classical complications. On the ninetieth — the translation to the French word “nonantième” — birthday of the Reverso the rectangular watch now comes with new expressions of several classical complications. Let’s go over them front to back. 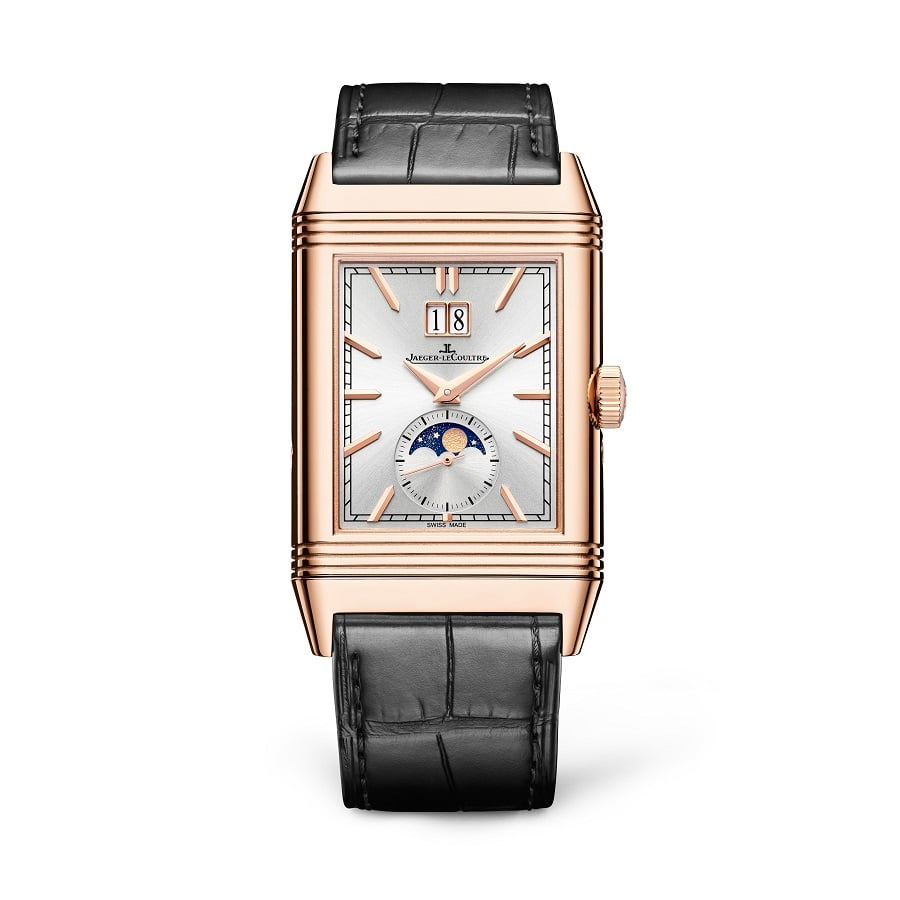 However complicated the pink gold Nonantième may be, the front dial exudes traditional refinement and elegance. The silvered, sunray-brushed dial with applied golden indexes and Dauphine hands could even be called understated. Sure, the big date is a prominent feature on the dial and so is the moon phase display, but the balance of the dial is perfect. I also like that the moon phase is set within the small seconds. It’s a complicated watch that doesn’t show off. 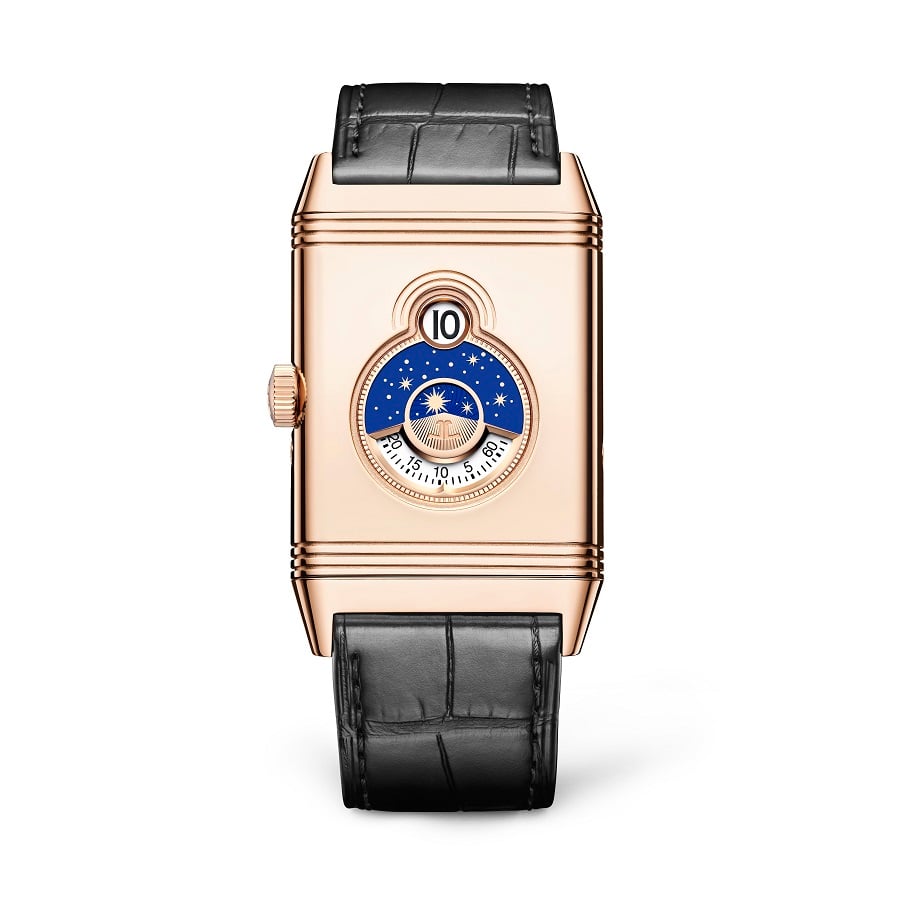 Reverso Nonantième: on the back

Flip the case over and this Reverso reveals visually striking expressions of two complications — a straight-forward digital semi-jumping hour semi-integrated with a picturesque night-day indication. And they’re arranged like a figure-of-eight and encircled by gadroons quite similar to the ones seen on the upper and lower edges of the case. The small upper aperture displays a semi-jumping digital hour indication. Seen for the first time in a Reverso, this complication recalls digital displays developed for wristwatches in the 1930s. It also reminds me of one of my favorite Reverso’s, the 2003 Reverso Eight Days Ref. 3018420 with a digital power reserve indicator on the case back. 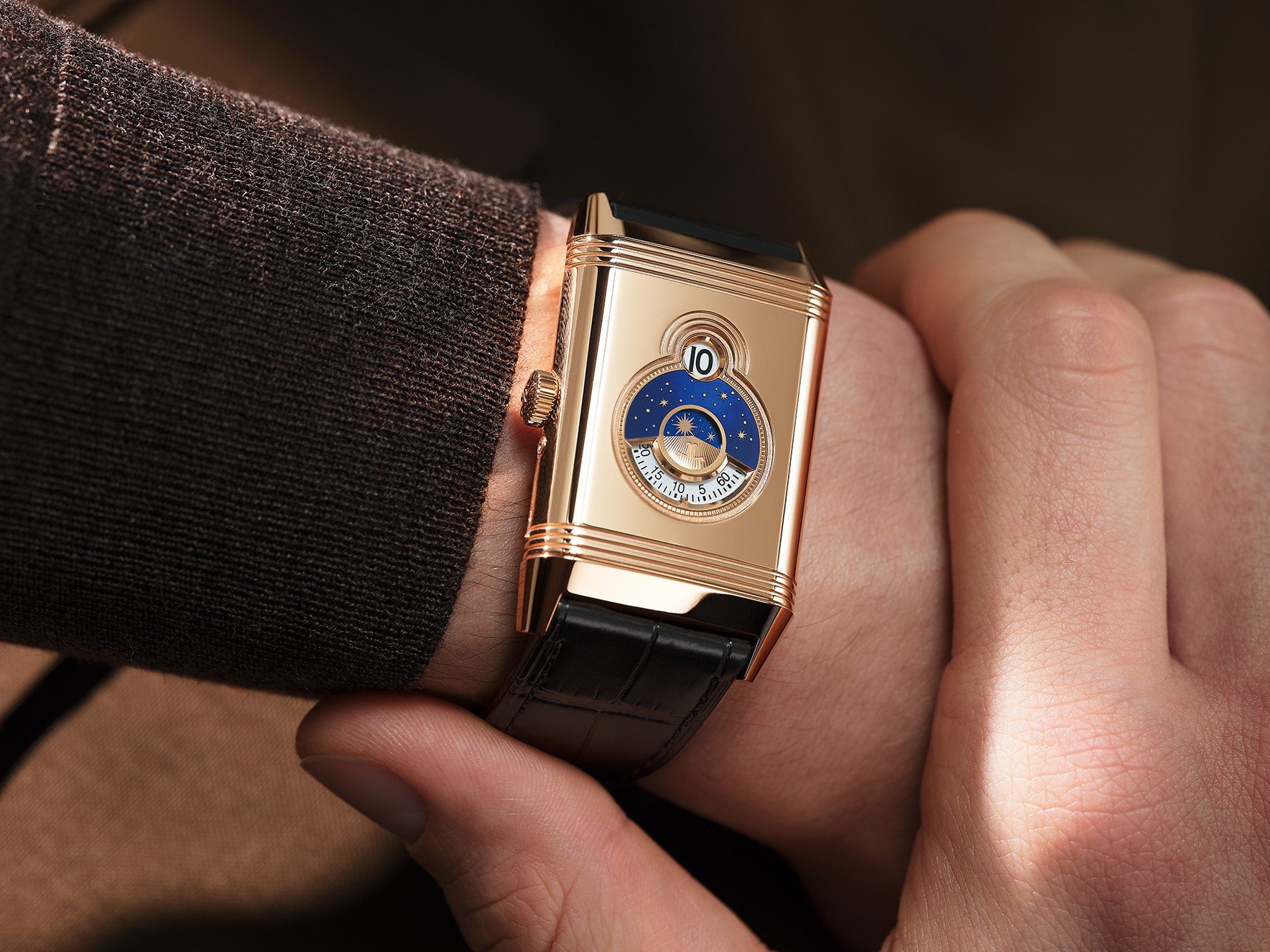 Digital and analog in perfect harmony

The minutes below the digital hour appear on a rotating disc that is partially concealed by a three-quarter plate lacquered in vivid blue. Done by hand in the Atelier des Métiers Rares of the manufacture in Le Sentier, the blue lacquer sprinkled with tiny golden stars depicts the night sky. Within a small circle at the center, an applied golden sun and moon, pass above a horizon to indicate night and day. The contrast between the sharp digital hour display and the analog artisanal look of the night sky paints a very original and harmonious picture. 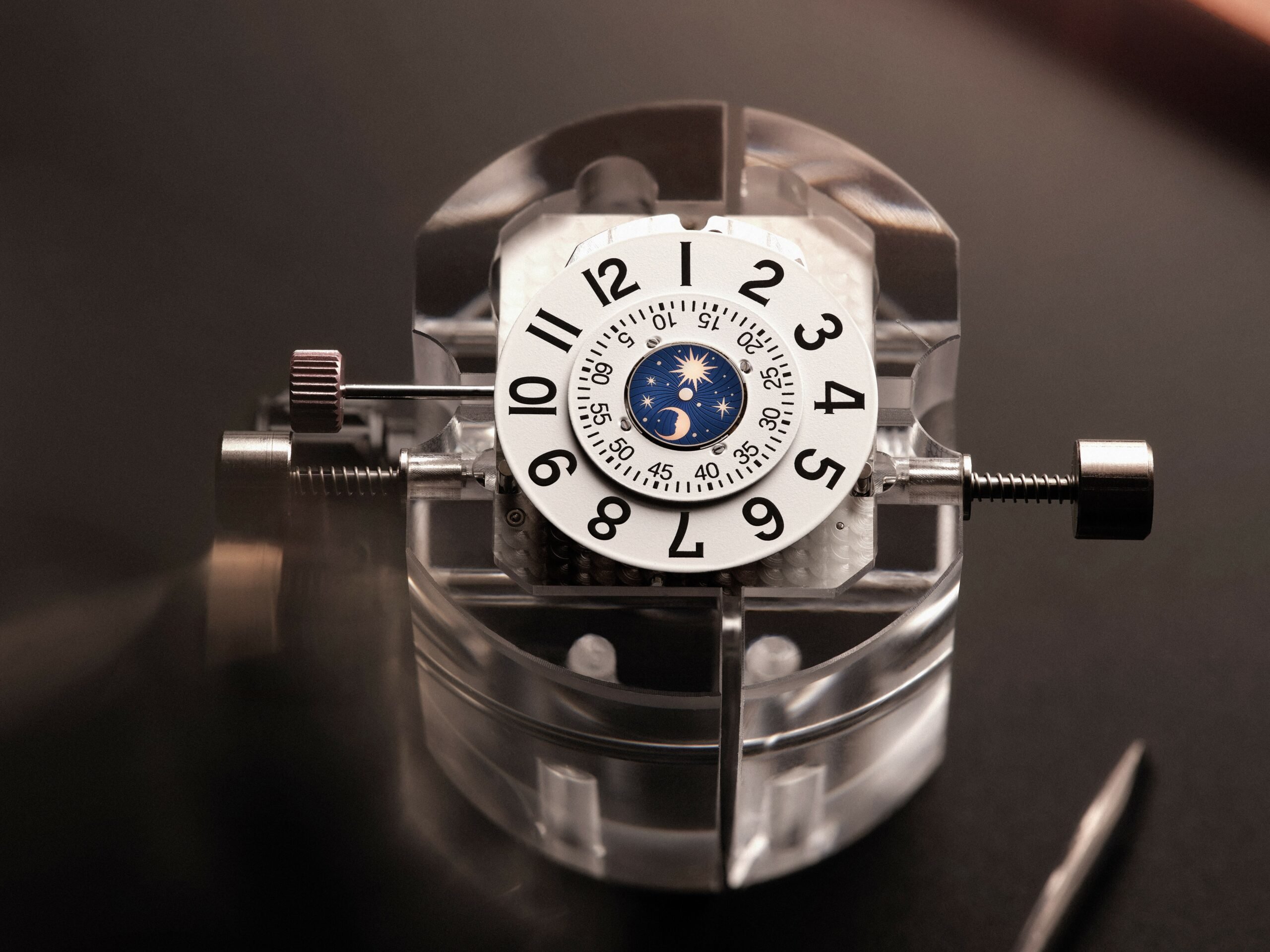 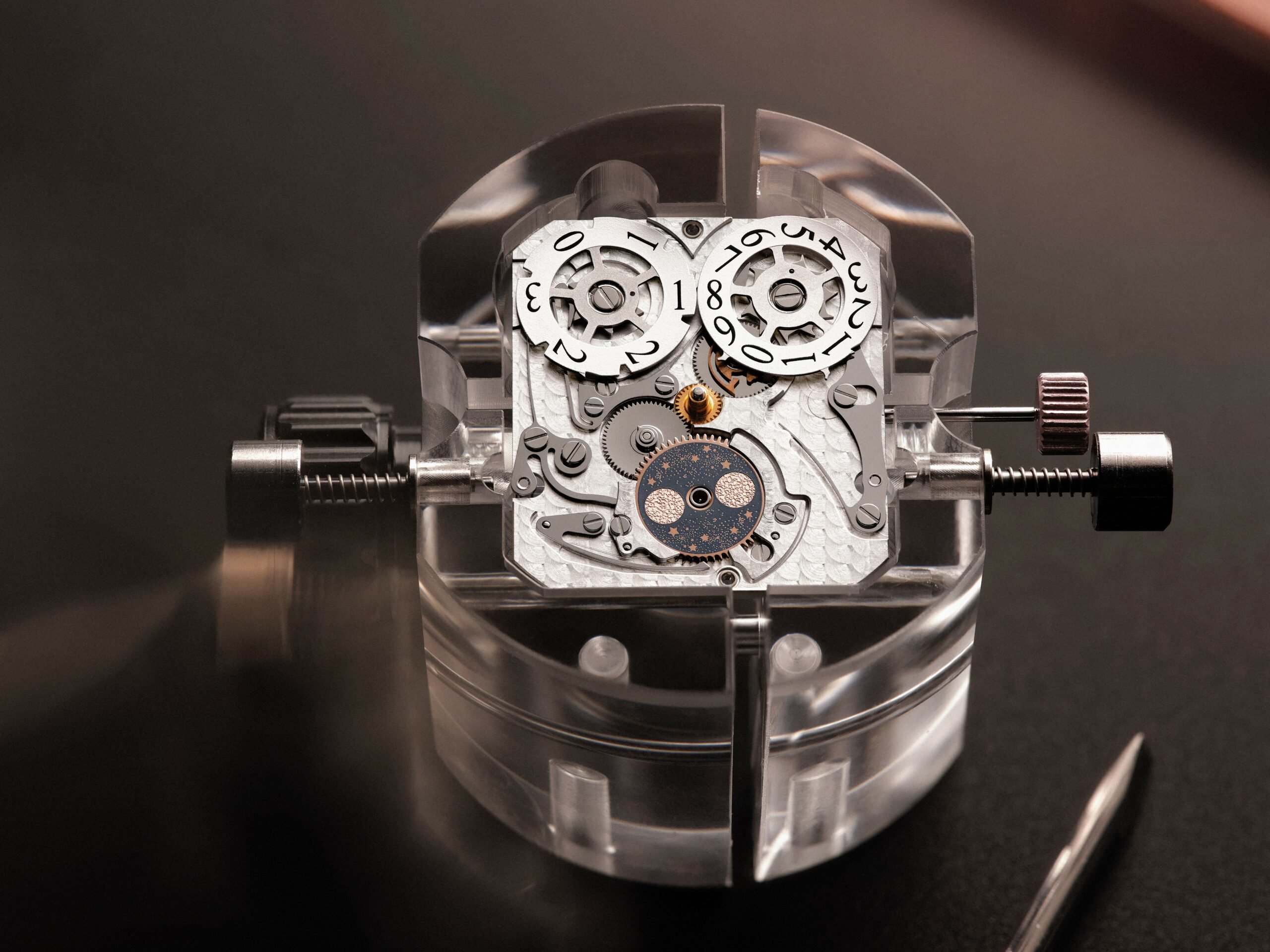 Unfortunately, the manually wound Calibre 826 comprising 230 components, stays hidden as is so often the case in a Reverso. Sure, that’s a downside to a two-faced Reverso. Mainly beacuse a complicated, two-sided form movement is not something you see every day. But on the other hand, the finishing of and the decoration on not one, but two dials is superb. It’s done in such a way you can and will get over the fact Calibre 826 remains a mystery.

Have a  look here for info regarding the availability of the stunning Jaeger-LeCoultre Reverso Tribute Nonantième.

Hot Topics
Introducing: The Omega Speedmaster Super Racing With Spirate System
165 comments
Design Vs. Specs — Which Is More Important To You When Buying A Watch?
86 comments
My Predictions For New Omega Speedmasters In 2023
54 comments
The Time To Buy Is Now: How The Current Economic Climate Influences Watch Buying And How You Should React
51 comments
A Regret-Free Guide To Buying Your First Luxury Watch — Part Three: Higher-End Options From Omega, Rolex, Grand Seiko, And More
48 comments
Popular
Watches Of The King – Elvis Presley’s Notable Timepieces
Balazs Ferenczi
9
Seiko 62MAS – The First Professional Diver Watch By Seiko
Michael Stockton
13
Comparison – The original Oris Diver vs Sixty-Five
Robert-Jan Broer
1