One of the exciting experiences during watch fairs is the encounter with rare super complication watches. A few brands demonstrate what they are capable of – continuously stretching the limits of what is considered possible in watchmaking. In 2003 Jaeger-LeCoultre presented the first model of their Hybris Mechanica family. Since then, the brand adds one spectacular family member after another. Each new model is not just a modification of the previous one but a completely new approach, new design, and new movement. This year, too, Jaeger-LeCoultre doesn’t disappoint us: the Reverso Hybris Mechanica Calibre 185 is the brand’s new mind-blowing creation.

As you probably know, the concept for the Reverso watch is a cradle that holds the actual watch case. The owner can flip over (“reverse”) the case within the cradle, which originally was the solution to protect its front during polo games. Later, the brand discovered that the case’s blank back serves as a perfect place for personal engravings. When the Reverso lost its importance as the adequate watch for rough sports, Jaeger-LeCoultre turned the back of the case into a second dial displaying either a different design or a different time zone. The Reverso Hybris Mechanica à Triptyque, which the brand presented in 2006, was the first Reverso that incorporated the cradle’s inner surface to feature a third dial. The Reverso Hybris Mechanica Calibre 185 now even includes the cradle’s back to present a fourth dial. 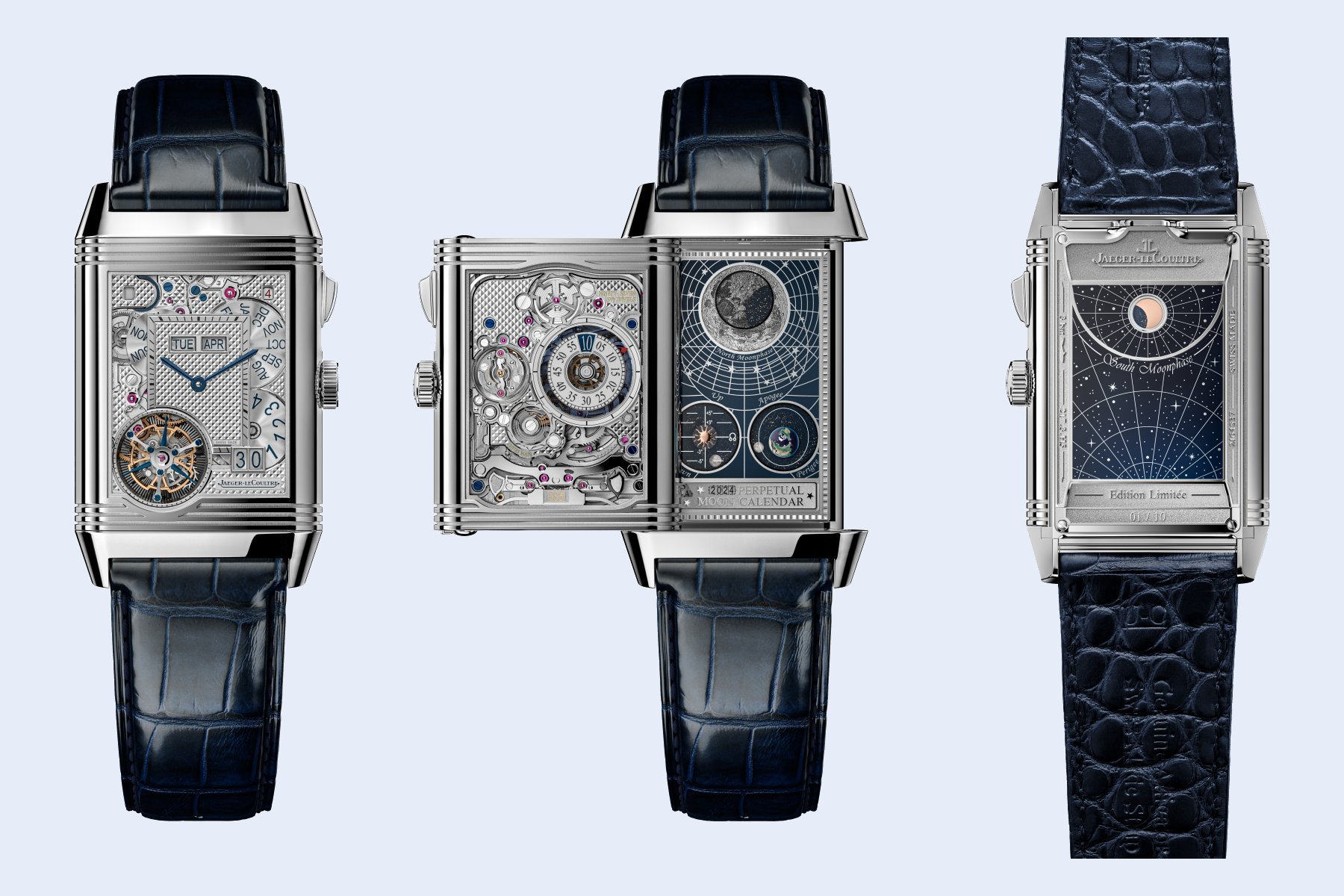 A watch with four faces

The image above shows the four different dials or faces of the Reverso Hybris Mechanica Calibre 185. We will explore each of these dials in detail in a moment. But first, let’s take a look at this watch in its entirety: This is the first watch with four dials, and it is the most complicated Reverso ever made. This should at least make you raise an eyebrow.

Each dial provides a subset of complications and indications that form a self-contained unity within the overall design.

Do four dials make sense? Isn’t it unpractical to have to flip the case within the cradle to see two of the dials which are usually hidden? Let’s imagine we had all the indications of this watch on one or two dials (front and back). Squeezing all this information into one or two dials would inevitably create a quite cluttered dial. Four dials help to logically and functionally group and arrange all the information offered by this watch. Each dial provides a subset of complications and indications that form a self-contained unity within the overall design. Trying to put all that you see spread over four dials into one or two dials would require much larger dials and a much larger watch accordingly. A design consisting of one or two dials would most probably yield a watch that is unwearable. 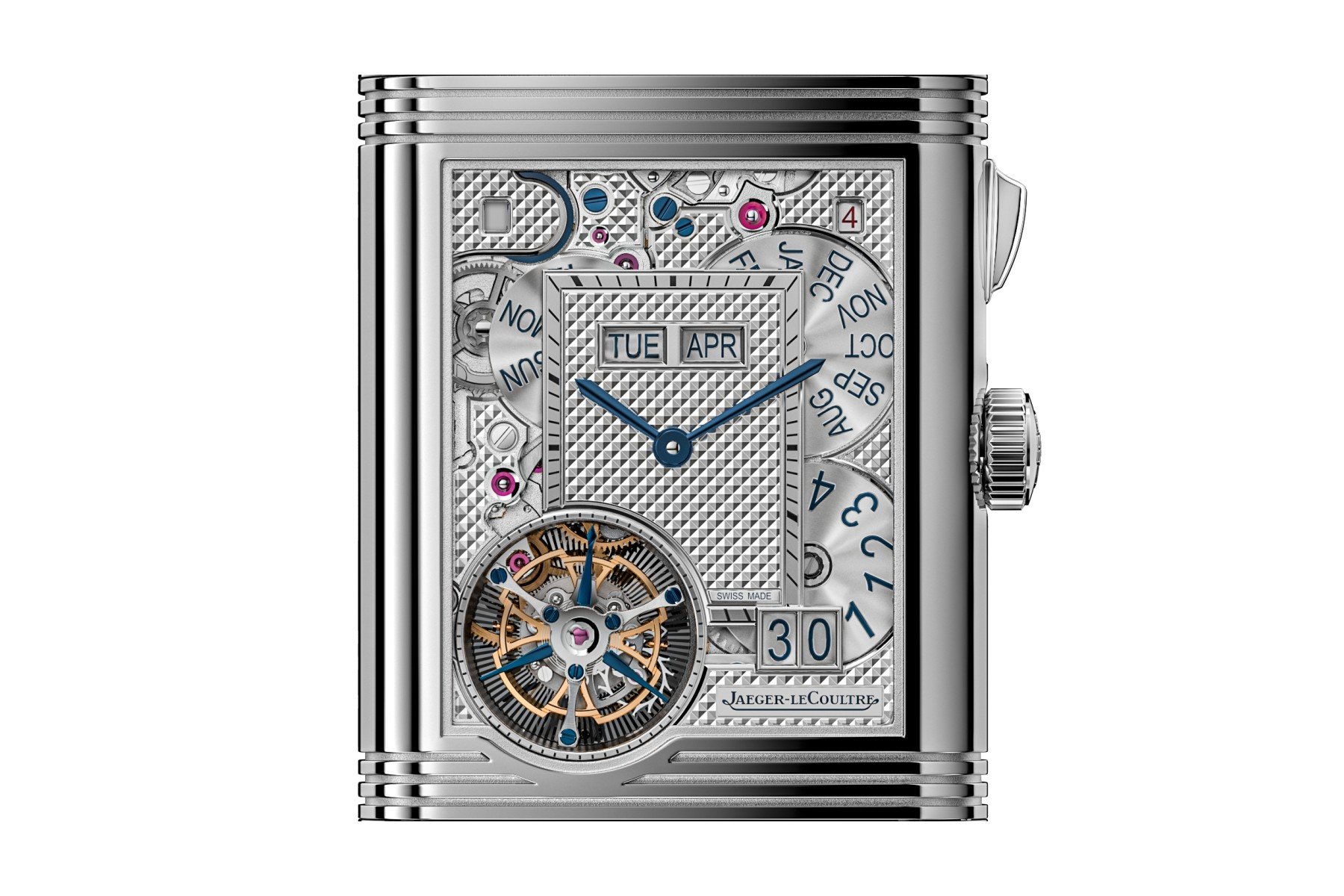 On the first face – the main dial, so to speak – we find the time, located at the center, which makes sense. But, a flying Tourbillon dwarfs the hour and minute hands. It also serves as a small seconds indication. To be honest, I would have preferred this Tourbillon not to appear at this position. It is distracting from the remaining indications. It affects the visual balance of this dial. When the minute hand points to the seven o’clock position (indicating 35 minutes past the hour), it will unfavorably overlap with the Tourbillon.

What is remarkable about these date indications is that they all switch instantaneously at midnight.

All the other indications here are parts of a perpetual calendar. Above the center, we find indications for the day of the week and the month. At the lower right, there is the day of the month. To grade this latter indication up, the designers have realized it as a big date, forming the displayed number with two separate disks. What is remarkable about these date indications is that they all switch instantaneously at midnight.

You can read all aspects of the current time and date at a glance, which is not always the case, even at less complicated watches. At the top corners, you can detect two small apertures for additional indications. The left one probably is a day/night indication, switching to a dark color during the evening hours. The right one probably is a leap year indication, displaying the number one to four, where four indicates a leap year. As you can see on the image showing the third face of this watch, it is set to April 30th, 2024, a leap year. 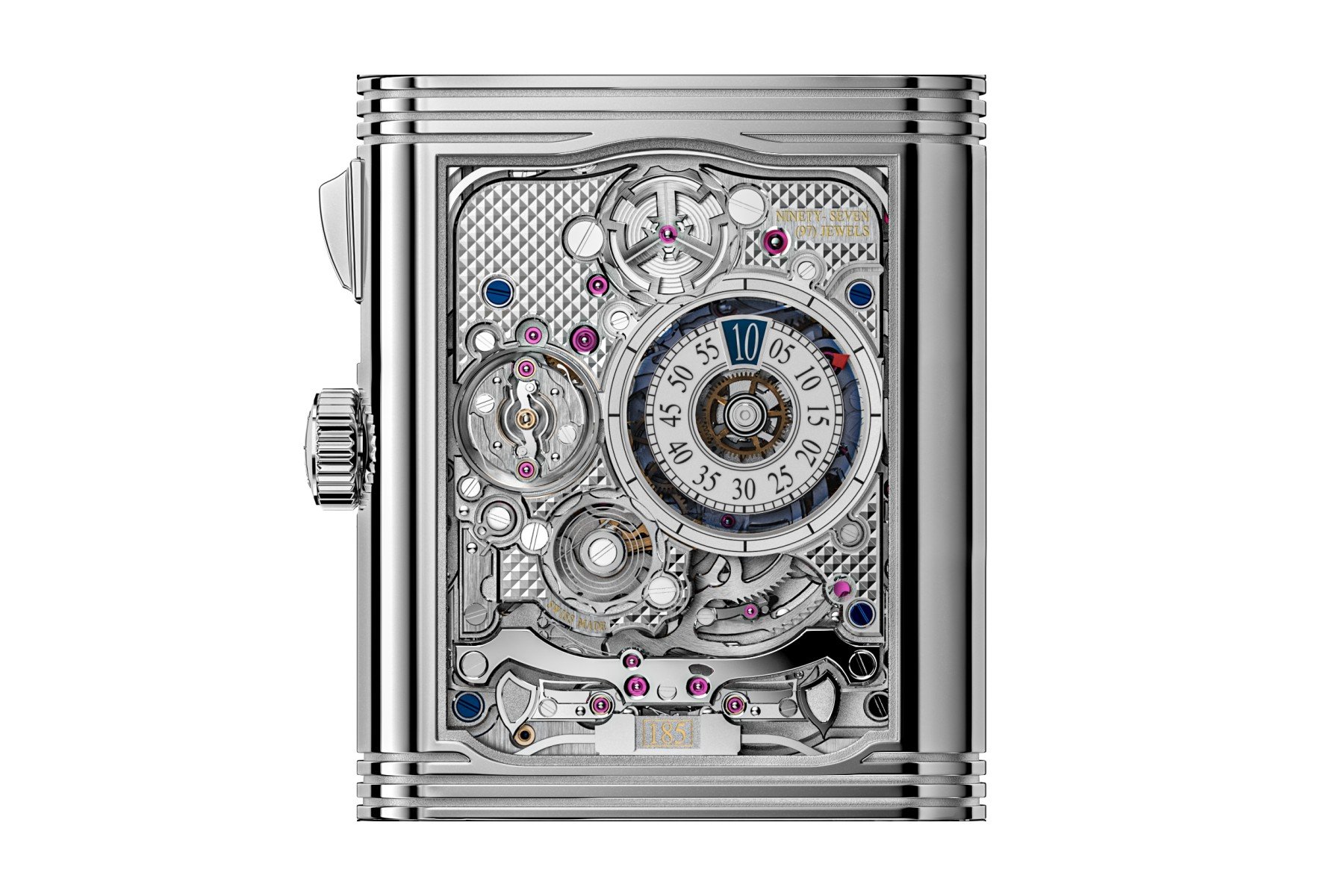 Flipping over the case, we face the mechanics of a minute repeater plus another time indication. The time display on the right is particular as it incorporates a digital hour display at 12 o’clock and a red marker circulating around the minute scale to indicate the minutes.

Jaeger-LeCoultre’s chiming watches are among the loudest on the market.

At the bottom, we can descry two tiny hammers that strike the gongs around the dial to chime the time when pushing the little lever above the crown downward. These tiny hammers are not suggestive of being capable of producing a noticeable sound. But, be assured that this watch does chime a lot louder and clearer than you might expect. These hammers are so-called trebuchet hammers. This means that they are working similar to an ancient catapult, throwing their heads against the gongs. Most importantly, the gongs are attached to the crystal instead of the case, significantly enhancing the chiming’s loudness. Jaeger-LeCoultre is not creating as much fuss about the loudness of its chiming watches as another brand does. Fortunately, once I had the chance for a direct comparison of chiming watches from different brands. Jaeger-LeCoultre’s chiming watches are among the loudest on the market.

Another noteworthy aspect of the chiming mechanism in the Reverso Hybris Mechanica Calibre 185 is that there are no gaps between the chimed hours, quarters, and minutes. For example, in conventional chiming mechanisms, the interval between chimed hours and quarters is always the same. No matter if the mechanism chimes one or twelve hours, the quarters only start after the duration of twelve hour chimes. Caliber 185 even masters to completely eliminate the time gap between hours and minutes if there are no quarters to be chimed. 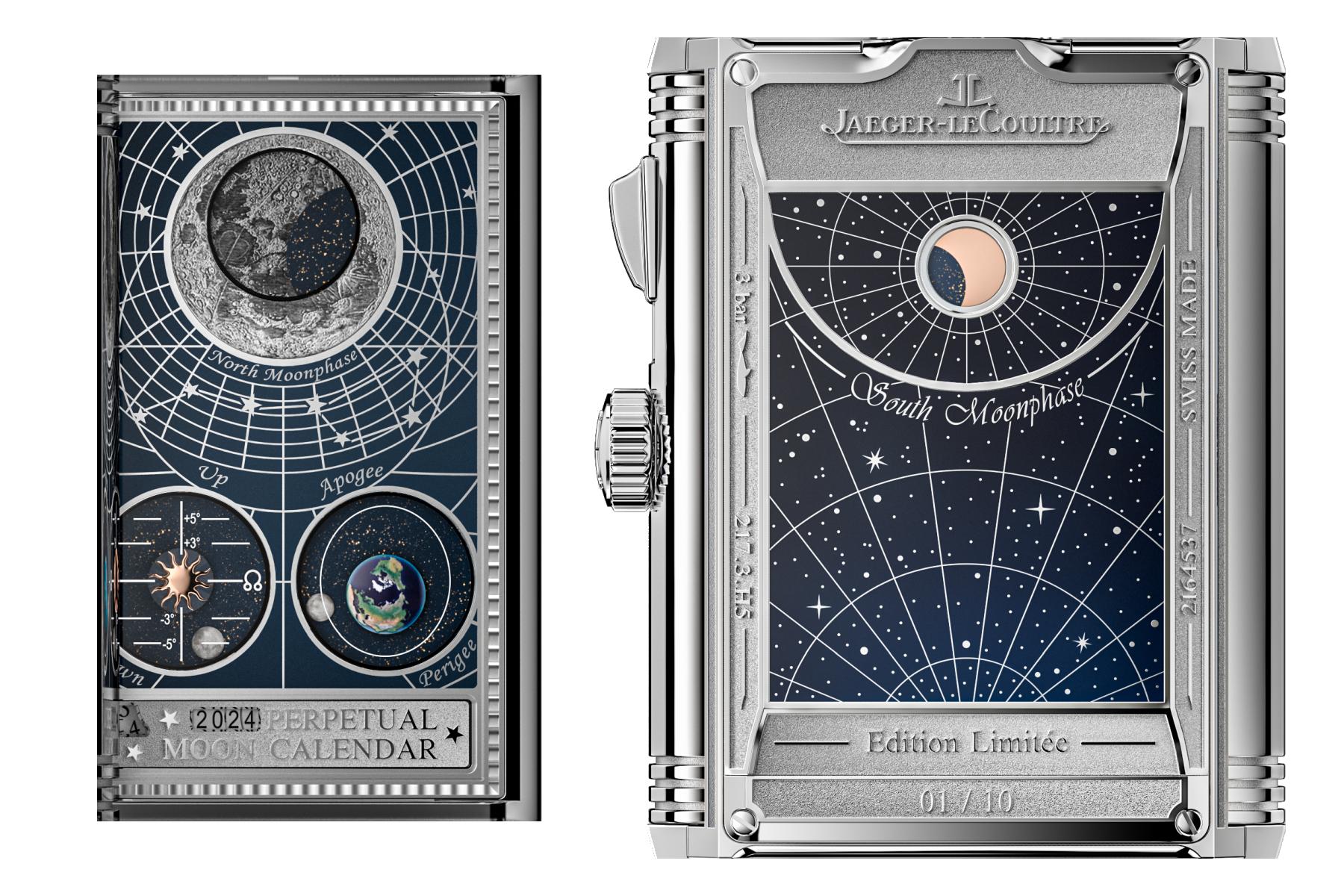 A moon phase indication is a beautiful supplement to a mechanical watch. With the Reverso Hybris Mechanica Calibre 185, Jaeger-LeCoultre is extending the limits of such a complication. A prominent artistic depiction of the moon phase in the northern hemisphere occupies the third face’s top. Many watches with moon phase indications require a correction after 122 years to show the correct moon phase. The watch we look at here shows an exact moon phase for 1,111 years before requiring a correction.

The indication at the lower left of the third face carries the name Draconic Cycle. This indicator tells you when the orbits of the moon around the earth and the earth around the sun intersect. Such an intersection may cause a lunar or solar eclipse.

On the lower right, you find a representation of the so-called Anomalistic Cycle. This indicator tells you the current distance between earth and moon caused by the moon’s elliptical orbit around the earth. Notice the enamel micro painting showing the earth as seen from above the north pole.

The fourth face displays the moon phase, as seen from the southern hemisphere. It is set against a night sky scattered with tiny stars.

If you are as curious as I am, you ask yourself how the movement in the case controls the indications in the cradle…

If you are as curious as I am, you ask yourself how the movement in the case controls the indications in the cradle even though the case can be moved freely within the cradle. The secret is a pin that extends from the top of the case into the cradle at midnight to advance the moon phase indications. This actuation from the case to the cradle does not impair the 30m water resistance of this watch. 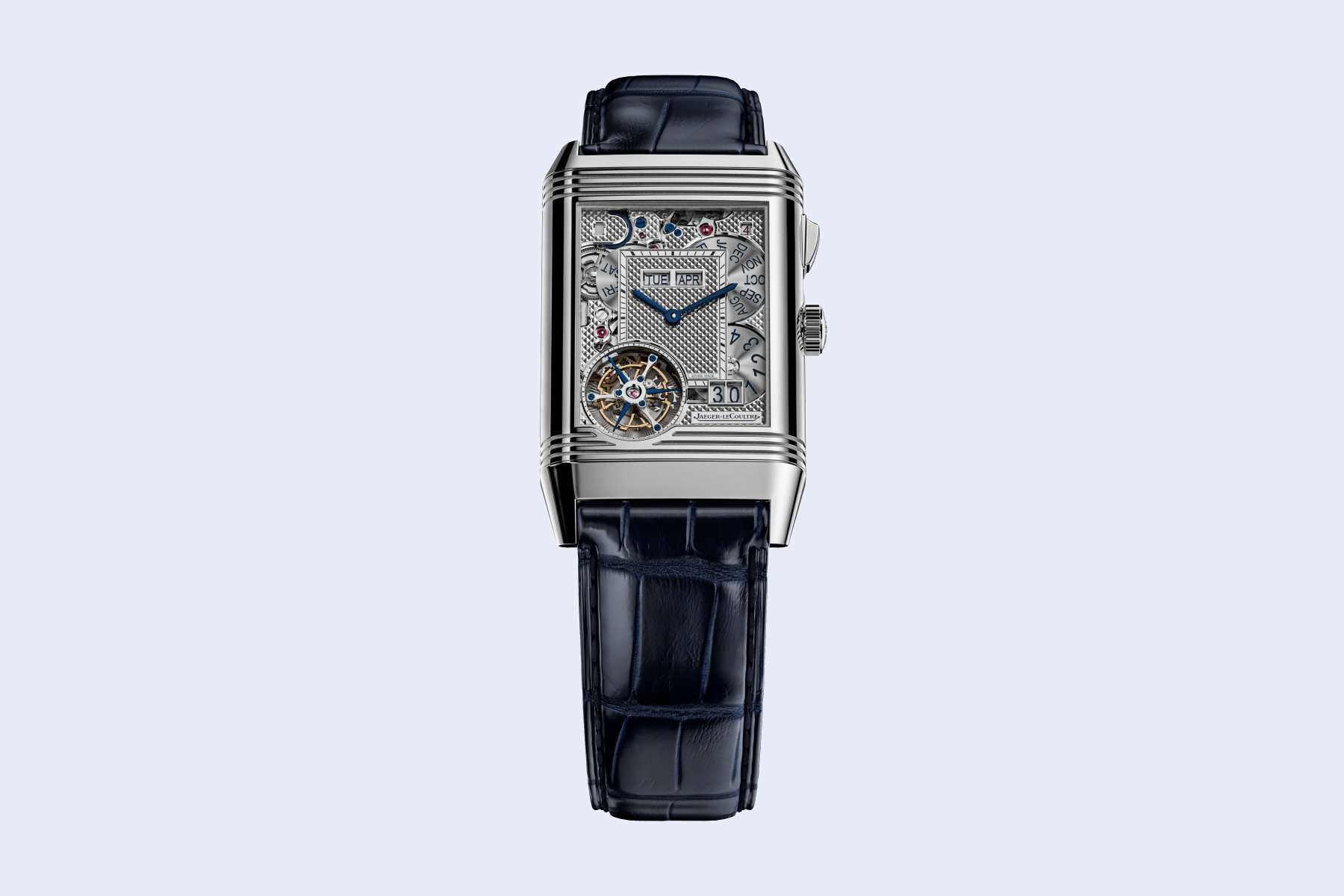 At first sight, this watch looks so innocent. But, within its conventionally sized white gold case at 51.2mm (height) × 31mm (width) × 15.15mm (thickness), this watch contains 11 complications, including a perpetual calendar, a Tourbillon, a minute repeater, and several moon indications. All these complications are executed to the top level of quality and functionality available on the market today. The wealth of information you can derive from all the astronomical indications alone is unprecedented in a single watch. Still, this watch is perfectly wearable. The extent of miniaturization is impressive. The second face of the watch informs us that the Caliber 185, working in this watch, contains 97 jewels. This gives us a hint on the plethora of mechanical wizardry going on behind the visible surfaces.

The experts at Jaeger-LeCoultre are artistically decorating every part of Caliber 185 by hand in top grade. Just try to count the sharp angles in the barrel’s cover, which you can see at the top of the second face.

There is a smart solution to master the settings of all the indications in this watch: It comes in a special presentation box that includes a mechanism to accomplish all these settings in a quick and intuitive way after the owner hasn’t worn the watch for a while.

To me, this watch is awe-inspiring.

Imagine that: A whole team of highly skilled watchmakers has invested six years into developing this watch. Now Jaeger-LeCoultre builds only ten pieces of it. What a dedication! Realize what immense value of craftsmanship each of these pieces represents. To me, this watch is awe-inspiring.

Visit Jaeger-LeCoultre’s website to learn more about the brand, its history, and the watches in the brand’s current collection.