This year at BaselWorld it was hard to discover true novelties. A lot of brands just expanded their collection by presenting “new” models with different colors and materials, a lot of retro designs as well. A number of brands did surprise me. klokers was one of them.

This is one of the brands you either hate or love. In my opinion they are quite interesting with their out-of-the-box vision and design. Not a hardcore watch brand, but more somewhere between watches and design statements. Their way of presenting time is different and they are still pioneering less conventional grounds. Again, heavily focussed on design and remains affordable. With this in mind it’s quite logical that the watches do not house manufacture movements. It would be nice to see a hand wound or automatic ‘KLOK’ in the future, but for now they are equipped with quartz movements. 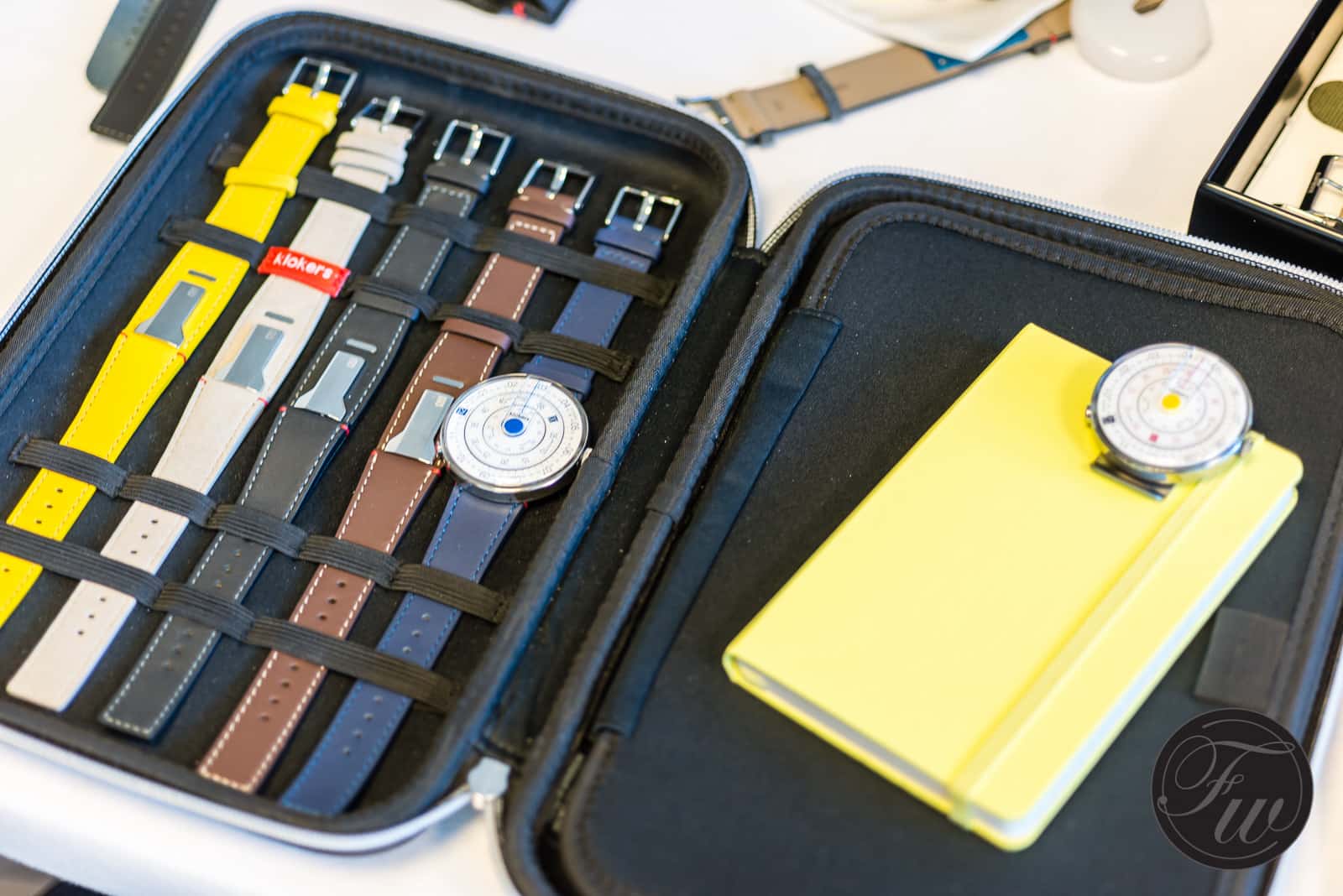 Klokers is definitely a brand if you like to adjust the look of your watch from time to time. All the watch heads have a special slide-on system. Also known as the klokers key. This way you can attach it to anything which has the designated clip. Possibilities are endless: transform the watch into a modern pocket watch, clip it on your bike or attach it to a stand to create a desk clock. More accessories with the clip will be released later on in 2017.

The first model was based on the old principle of the slide rule. Time was displayed through 3 discs. The outer disc displays hours, the middle minutes and the smallest seconds. We did review it a while ago. Click here to read the review.

Although the alignment was a bit off, we did like the first model. This year klokers presented the second model to us. An upgrade in many ways. Again, definitely a surprise during BaselWorld 2017. Let’s look at the core features. 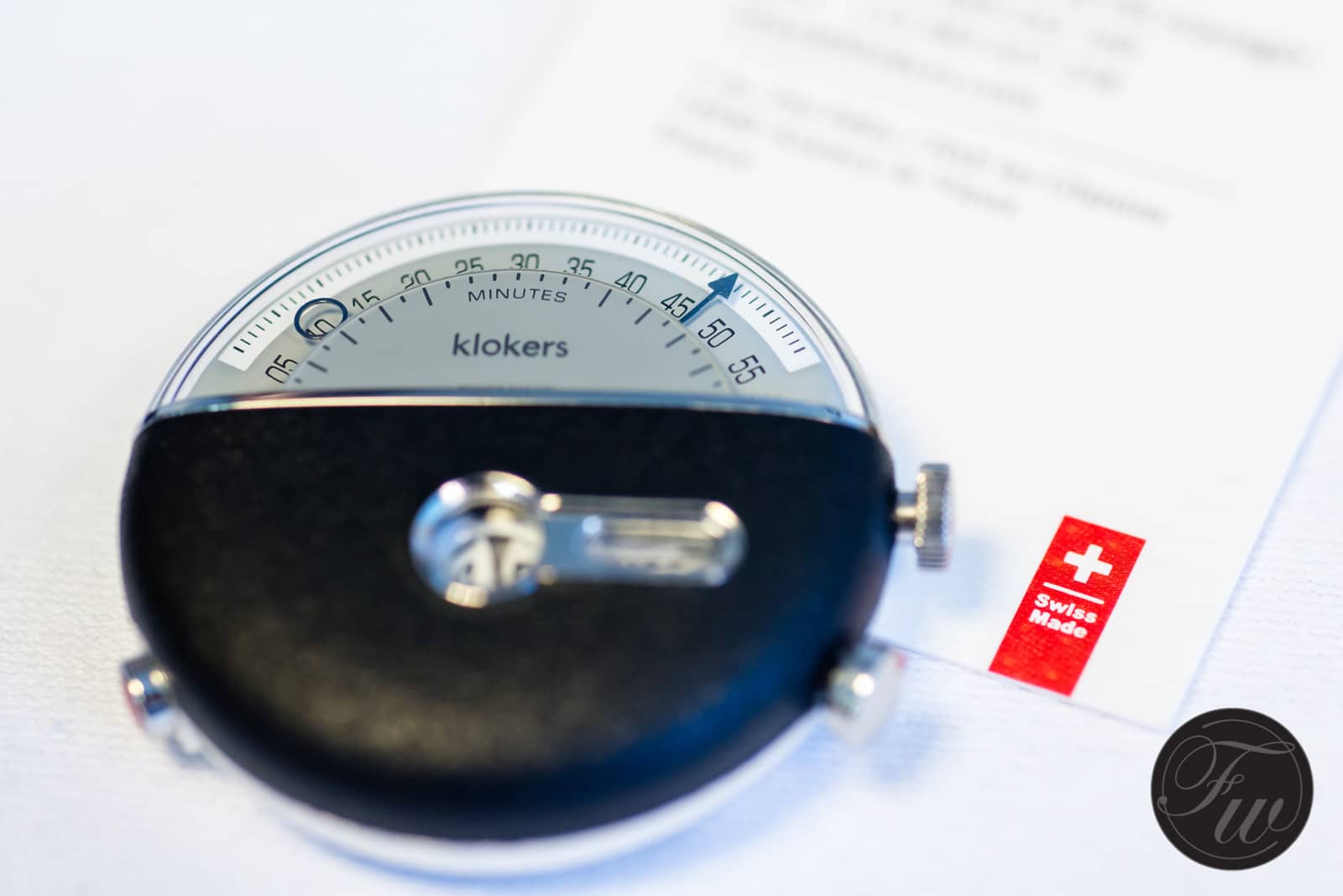 The second model displays 24 time zones. By pushing on the 4 o’clock pusher you can display all the zones in the hour window. This basically means you increment or subtract 1 hour in the central rounded window. Corresponding cities are displayed next to the hours.

The seconds and minutes are based on the retrograde technique: only 180 degrees to indicate time. After 60 seconds/minutes are elapsed the hands jump back to the start. 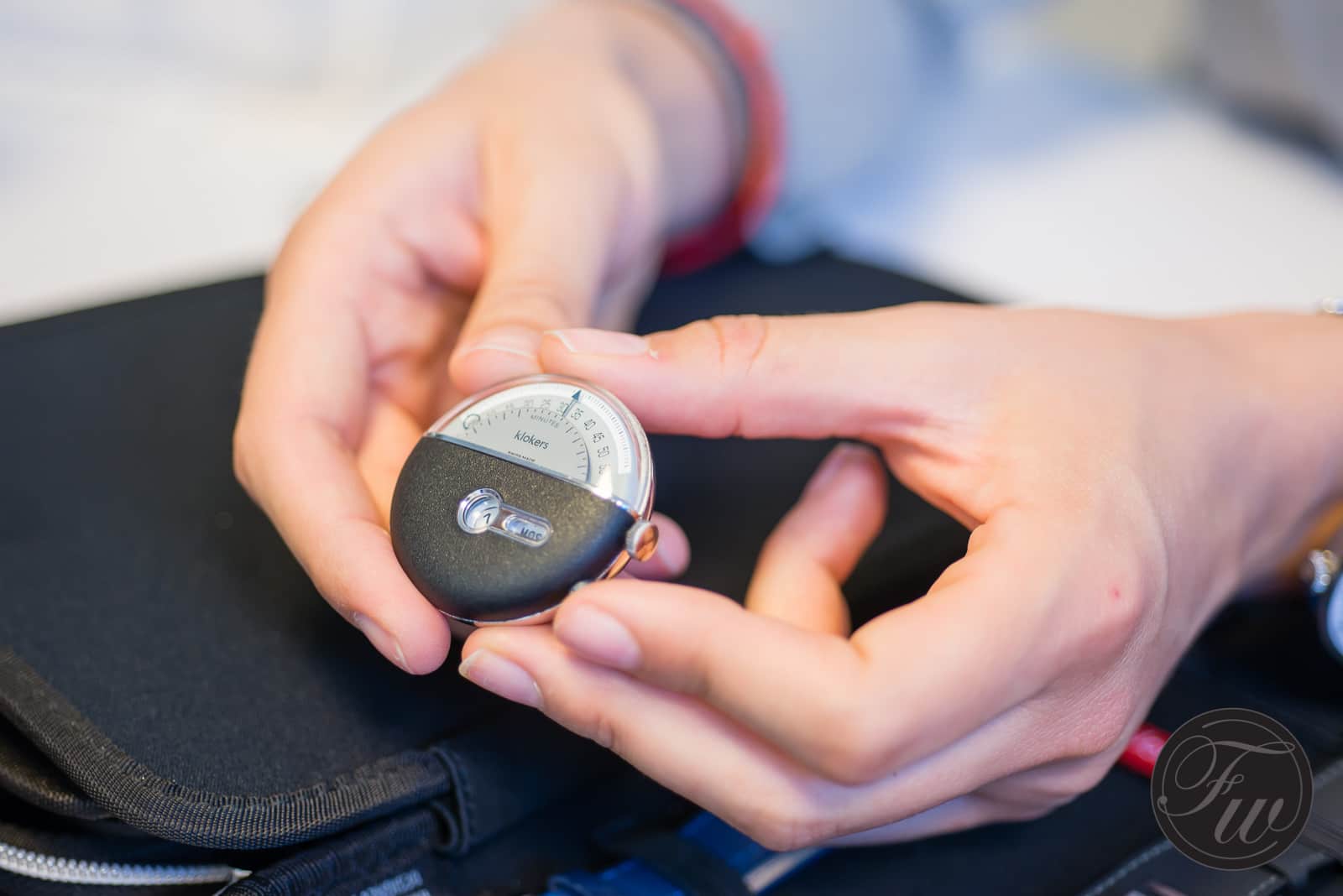 The KLOK-02 is available with 7 different coloured straps: black matte, satin black, indigo blue, brown, yellow Newport, alcantara orange, and alcantara gray. Swapping is easy with the patented fix system or klokers key. It underlines one of klokers cornerstones: interchangability. With this in mind I do think the definition ‘watch’ does not cover all the possibilities and forms of this time indicating object. You can unlock the fix system with the pushbutton at 8 o’clock. 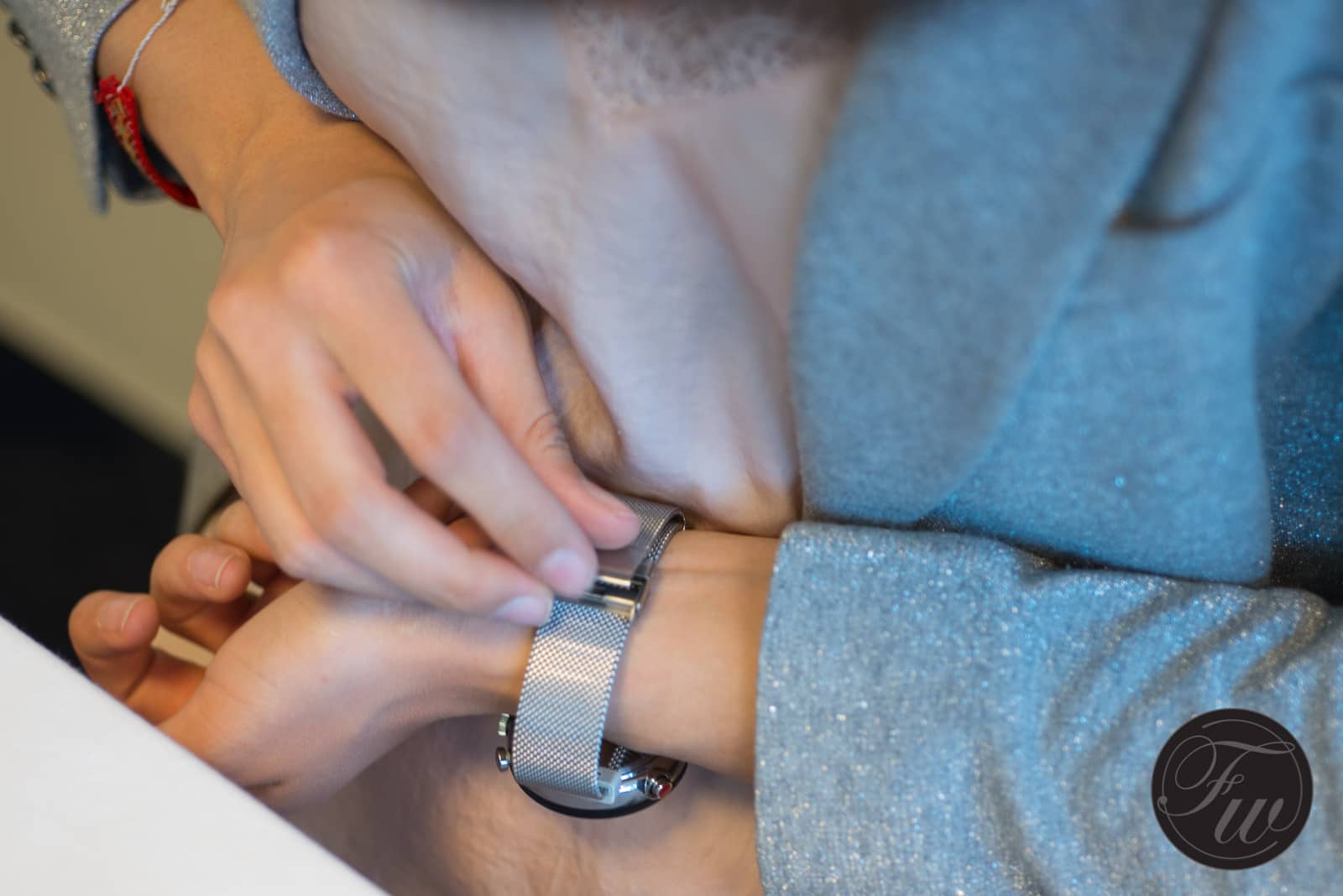 The watch does hold a little secret… By holding the 4 o’clock pusher a bit longer (circa 5 seconds) you can display the date on the central window. It is a perpetual calendar. Although it’s a nice extra I wonder if it is the most practical solution.

The watch is driven by a Swiss made quartz movement. One of the bigger Swiss producers delivers the movement to klokers: Soprod. Interesting thing is that the movement has 5 micro motors to power all the features of the watch. No winding on this one, just replace the 3V battery now and then. 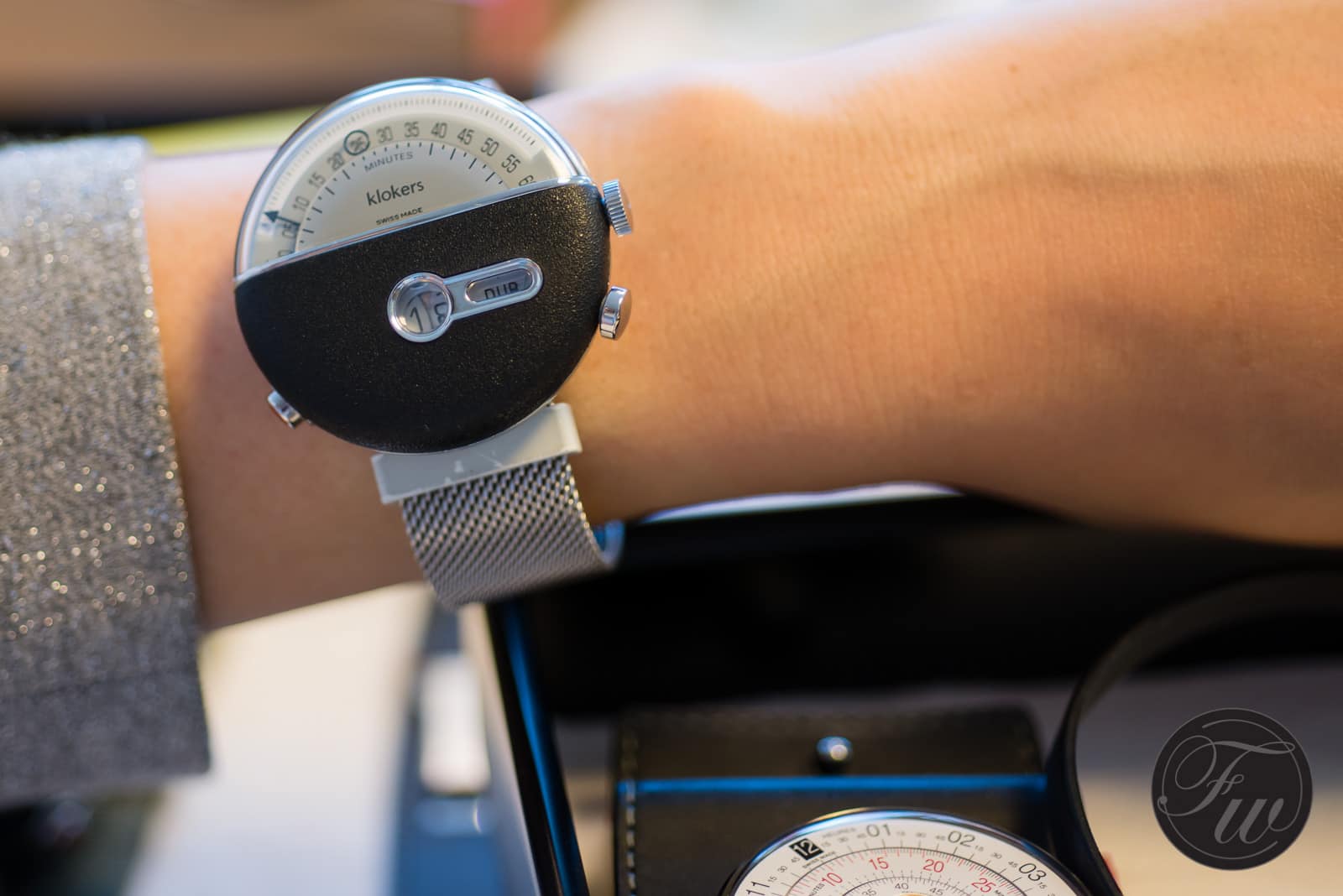 The distinctive design has a lot of nice details and possibilities for future models. One of the strongest points in my opinion. It does remind me of an old car dashboard and the imitation leather covered lower part adds even more to this imagination.

Another nice aspect is the depth in the upper half of the watch. By putting layers on top of each other the watch becomes more interesting. Plus, it is a nice solution to shorten the minute and seconds hand. A classy polished metal strip separates the upper and lower section in an appropriate way. It commits to the vintage dashboard look.

Since the watch has no lugs the diameter of 43mm is no problem for most wrists. It sits a bit high on the wrist, but it’s a light-weight; not wobbly at all. The subtle crown and pushers don’t distract the viewer from the rounded edgeless case. The blue hands are very legible. They suffer a bit on misalignment. 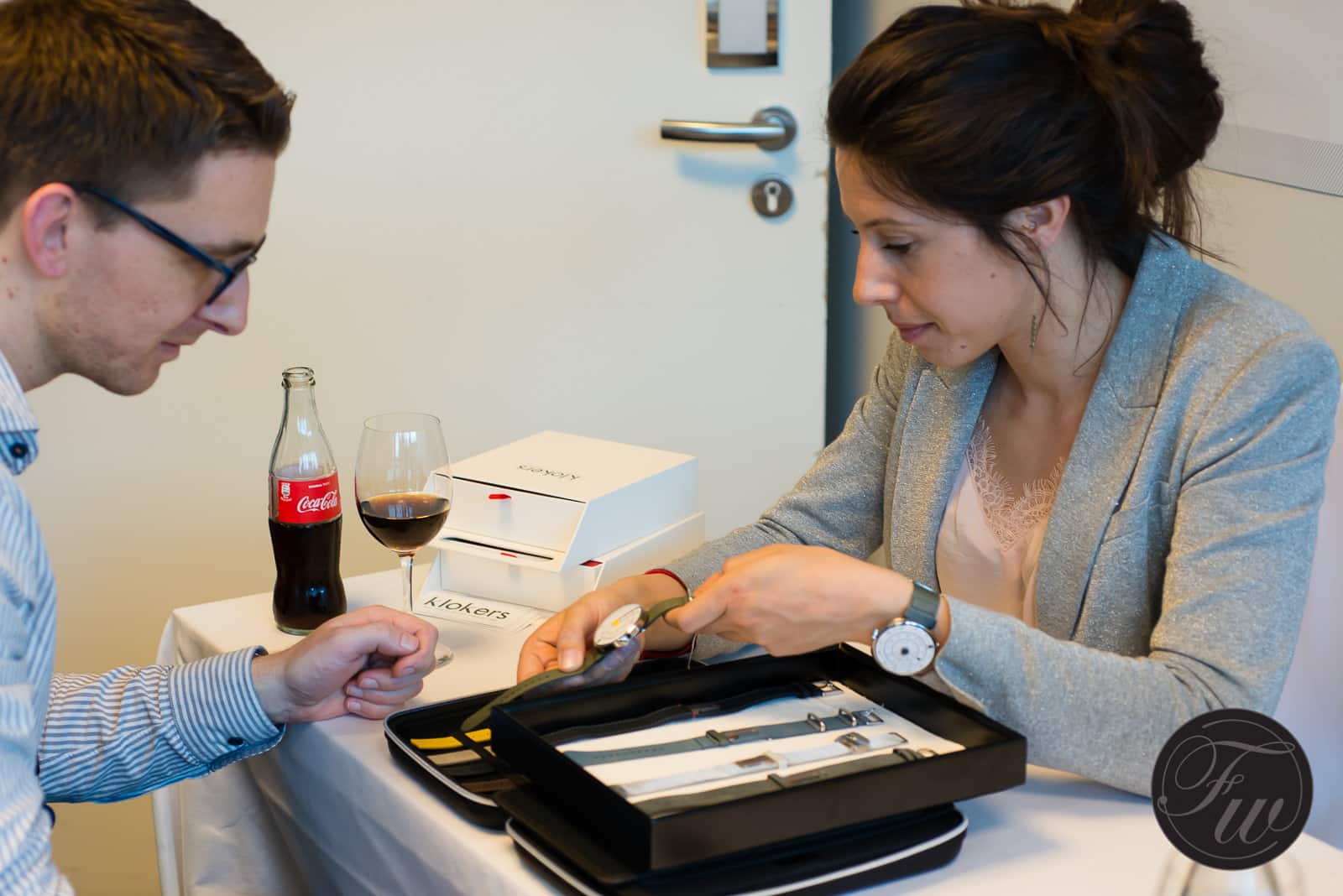 The KLOK-02 currently has a waiting list and deliveries will start from late April. It will retail for 865 Euro. Straps are 119 Euro (KLINK-01). It is also available with a longer/double strap. Prices are a bit higher on this version: 895 Euro for the watch and 149 Euro for the longer/double strap (KLINK-02). You can buy the watch directly via the website or via one of the retailers.

I’m surprised by the second model. It is a true design statement and a unique piece. Although it has a quartz movement, the retrograde setup and time zones are a nice feature and will form a nice variation in most collections. There are also points which do concern me a bit. The price has doubled compared to the KLOK-01 and the misalignment is still present. But, this points are overshadowed by the design and can be resolved by future development.  Ergo, a conversation starter with room for optimization/evolution.

Good to know: new bracelets and accessories for KLOK-02 and KLOK-01 will be available from September 2017. Even more interchangability!

We would like to thank klokers for having us during Baselworld 2017.

Hot Topics
Introducing: The Omega Speedmaster Super Racing With Spirate System
159 comments
Design Vs. Specs — Which Is More Important To You When Buying A Watch?
86 comments
The Time To Buy Is Now: How The Current Economic Climate Influences Watch Buying And How You Should React
51 comments
Introducing: The New Cartier Tank Française
49 comments
A Regret-Free Guide To Buying Your First Luxury Watch — Part Three: Higher-End Options From Omega, Rolex, Grand Seiko, And More
48 comments
Popular
Top 10 Rolex Watches – Overview of Models Favoured By Our Readers
Fratello
25
Grand Seiko SBGA211 ‘Snowflake’ And Why I Didn’t Buy It
Robert-Jan Broer
23
You Asked Us: Nomos Orion as a dress watch?
Gerard Nijenbrinks
10