Or should that be terrifyingly cute?
Rob Nudds
comments ...
Share

Whenever people I meet struggle to understand why I love the world of watchmaking so much, I will, from now on, show them an image of the Konstantin Chaykin Mouse King. It will save me a lot of time and effort explaining the simple joy complicated machines can sire.

It may be the year of the rat, but it is the week of KC. With the Kansas City Chiefs suiting up for their first Super Bowl appearance in more than 50 years this Sunday, you’d think KC lovers couldn’t have dreamt of anything more. Well, they shouldn’t have neglected Konstantin Chaykin. The Russian master once again impresses and amuses with the continuation of his Wristmon collection.

It all kicked off with the Joker, which seemed radical at the time. Now, looking back, it is positively staid in comparison to the delightful nonsense he’s released since. I thought the “It” version was cool (my favorite so far, actually), the Jack-O’-Lantern was clever, and the Only Watch 2019 self-portrait a generous, if somewhat unflattering, contribution. This model, however, is something else. The Konstantin Chaykin Mouse King is simultaneously glorious and ghastly. And it is absolutely brilliant for exactly that reason. 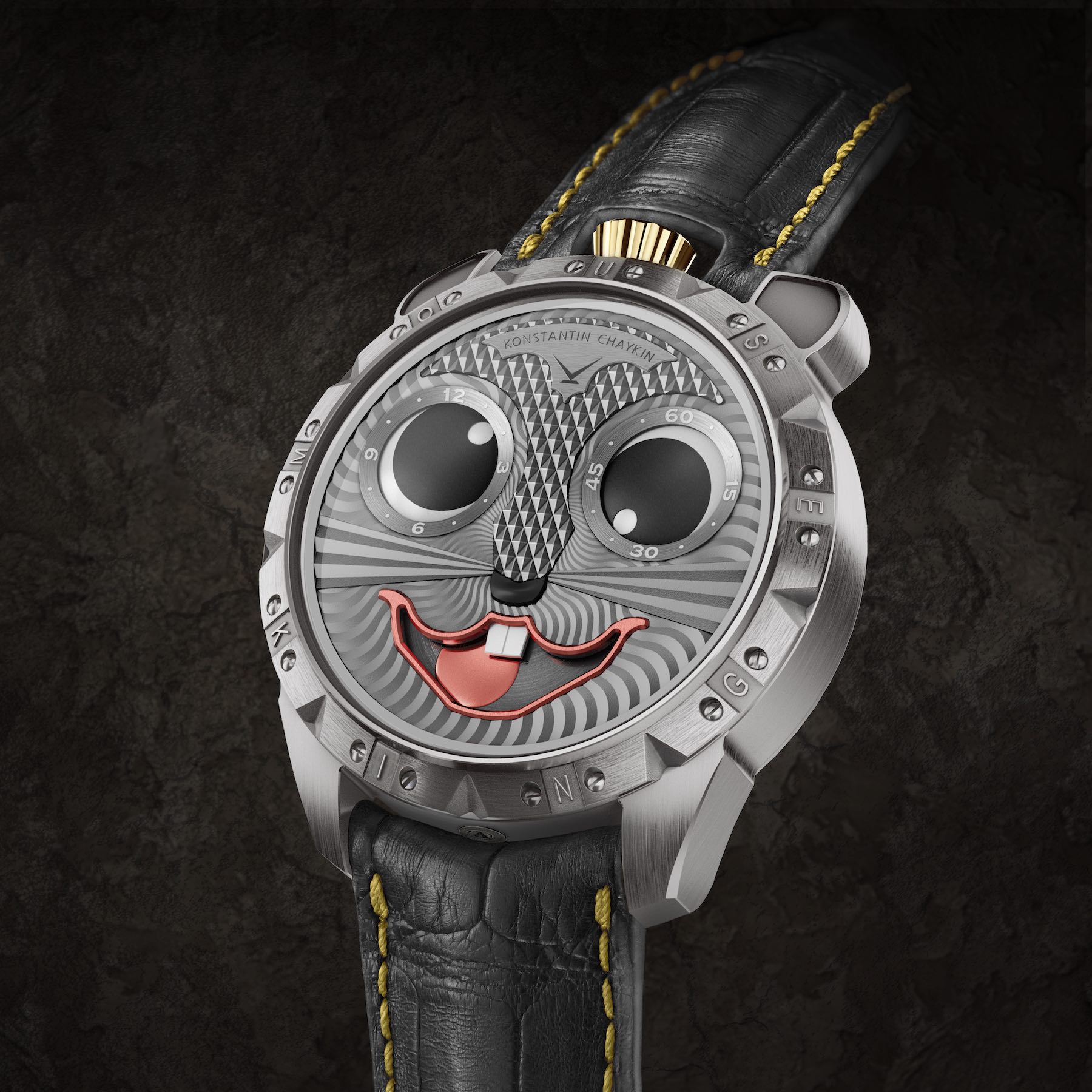 The Nutcracker and the Mouse King

This series of watches is a lot of fun. And while we ache for the early days when the Joker was priced at under €7,000, these models are still relatively attainable for something from such an esteemed and respected maker. If this is the first time you’ve seen a Wristmon, let me explain what’s going on. The pupil of the left eye points to the hours. The pupil of the right eye points to the minutes. And the cheeky tongue towards the bottom of the dial? A moonphase indicator. This unique handless dial layout is possible thanks to a module bolted on top of a Vaucher base caliber. A simple mechanical fix with wild aesthetic results. Cool, no?

The Mouse King watch was inspired initially by a bedtime story Konstantin read to his young daughter over the Christmas period —  “The Nutcracker and the Mouse King.” Then, when he realized what year was about to dawn on the Chinese calendar he committed to bringing the vision to life. Weirdly, the date of Chinese New Year (January 25th), is the same as his daughters (and my brother’s, who was an avid keeper of rats in his youth). 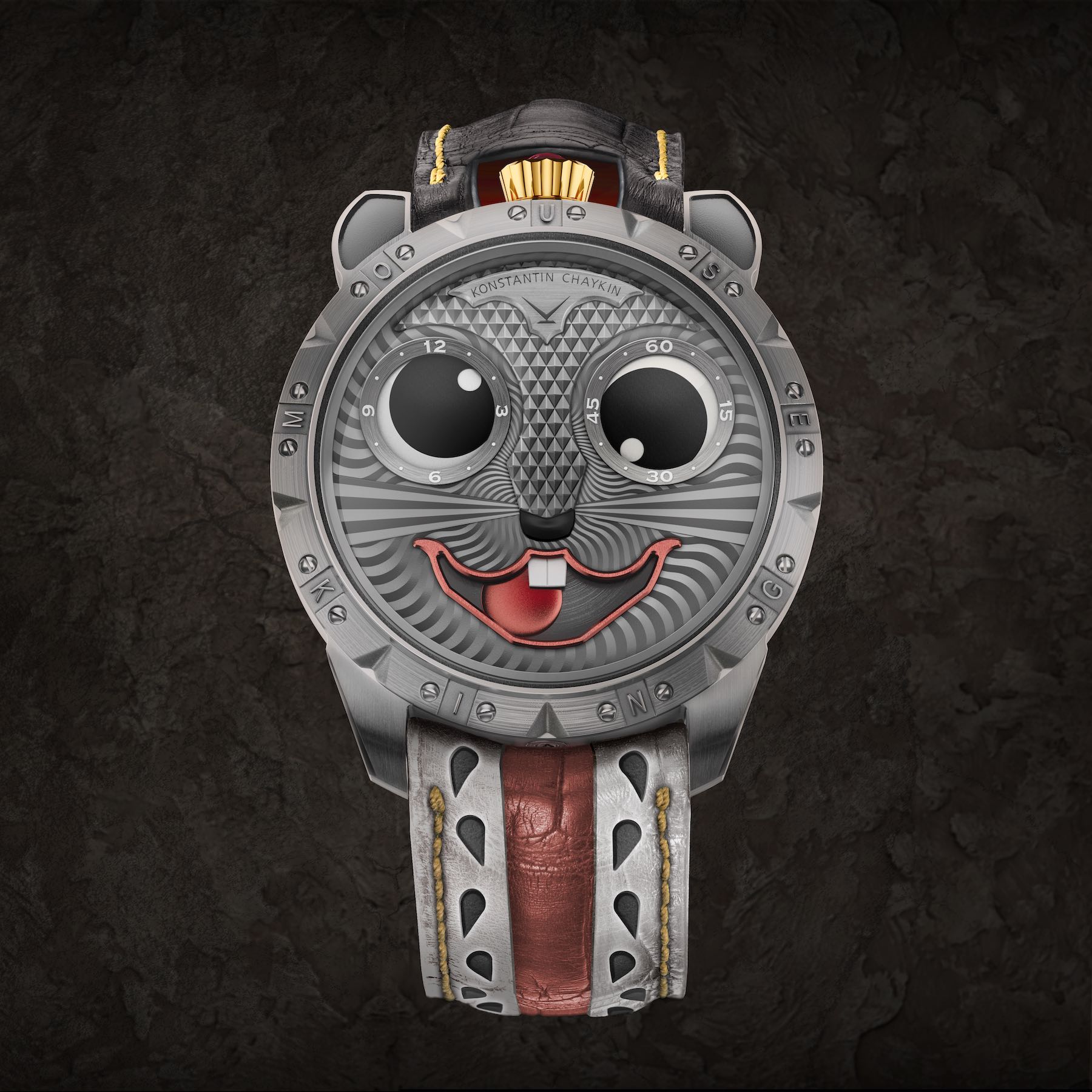 There are two major twists to the Wristmon DNA (and you’ll appreciate that pun in a moment). The first is the crown position. Rather than being located at 3 o’clock, the movement has been “twisted” 45-degrees counter-clockwise. The winding button now sits atop this cheerful rodent’s face, crowning him as the king of all sewer-dwellers.

With the crown no longer at three, KC obviously felt that adding two dummy crowns for the ears would be a bit ridiculous. And so, for the second major change to the case silhouette, the ears move to the 12 o’clock side lugs. This is the most cartoonish aspect of the new design. In theory, I don’t like it. In practice, however, it (somehow) works. I’m left shaking my head in mild annoyance that as hard as I try to criticize this piece, I just can’t. Because it makes me laugh. Out loud. I can’t quite imagine if I could handle wearing this on my wrist every day (for fear of forgetting what I had on and scaring the bejesus out of myself whenever I checked the time), but it is so ridiculously self-confident, I would be proud to give it a whirl. 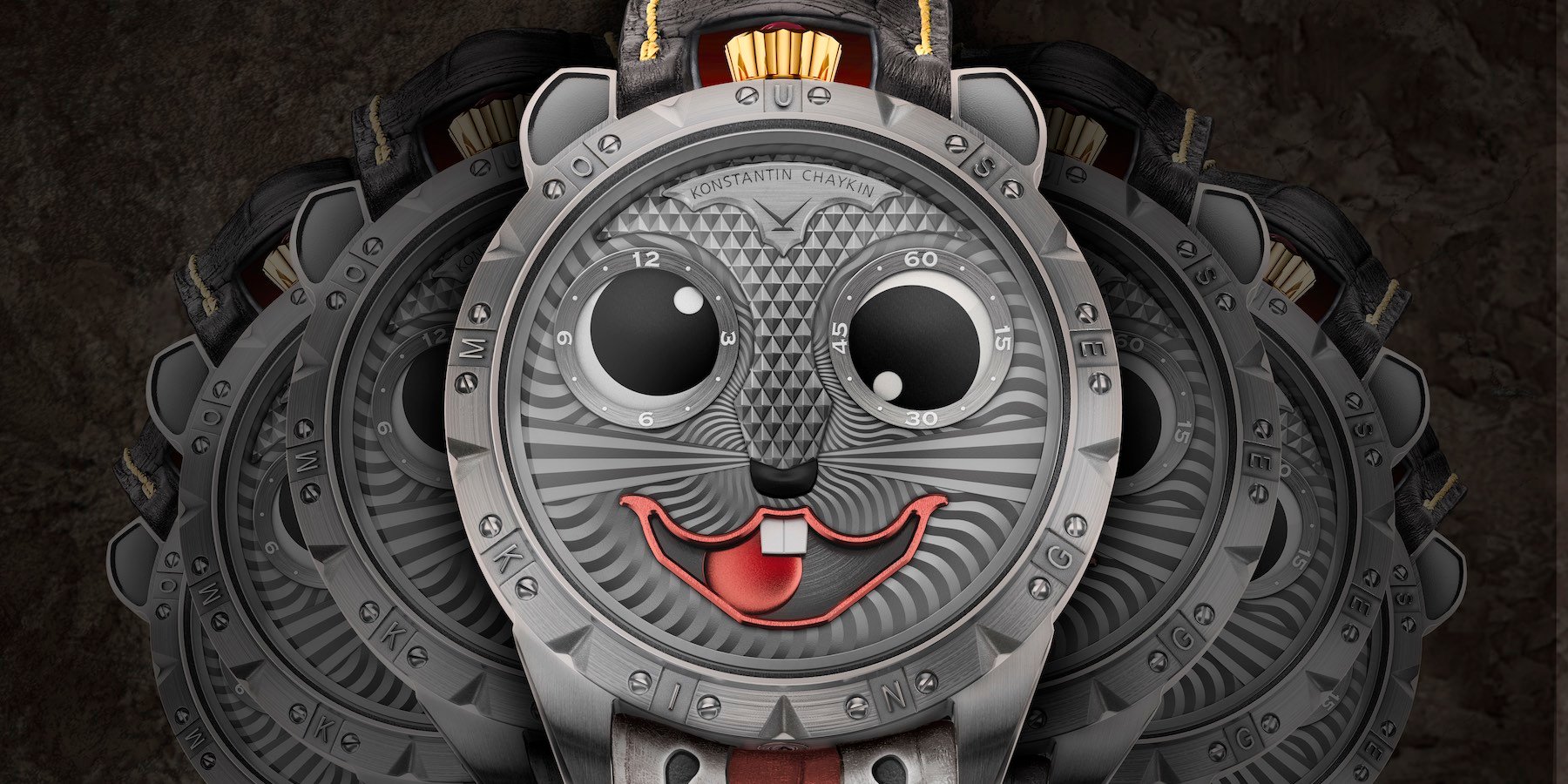 There will only be seven of these little critters available. That’s not many, but it is six more pieces than there were of last year’s “Unique Pig” model. The automatic movement is a Swiss-made Vaucher 3002 and the module made in the Konstantin Chaykin Manufactory is called the K07-1. It boasts a sufficient 50-hour power reserve and a 4Hz operating frequency. The case of the Mouse King is 42mm wide and 13mm thick, and that relocated crown really improves its appearance on the wrist. Learn more here.