A new addition to the German brand’s Pilot line, the sub-dial-sporting Laco Würzburg makes full use of the ETA 6498.1 base caliber’s attributes beating away inside its 42.5mm case.

I have a bit of a love/hate relationship with Pilot’s watches. There are some, like the Zenith Extra Special Pilot’s (time-only) series that I love. There are others that leave me cold. Laco’s output falls somewhere in between these two camps and isn’t averse from switching sides on what seems like a release-by-release basis.

I’ll start off with the good — the very good. There is only one brand in the world — in watchmaking and all other industries — that I will tolerate pre-aged goods from. That brand is Laco. Its pre-aged Pilot’s watches fly in the face of everything I hold dear and yet they are truly awesome. They are just so well done. I don’t know how the brand does it (hint: Laco. Please invite me to the factory so we can show the Fratelli exactly how you do), but the results look incredibly genuine without sacrificing the usability of the watch. So whenever this German stalwart drops a new battered beater, I sit up and take note.

The “new” stuff? It rarely grabs me in the same way. I was a slow convert to the sunburst taupe dials the brand released in 2019 (and if you want an extremely good value limited Flieger, check these babies out), but it won me over in the end. When I saw the Würzburg for the first time, my interest was piqued. Why? Because of the movement. 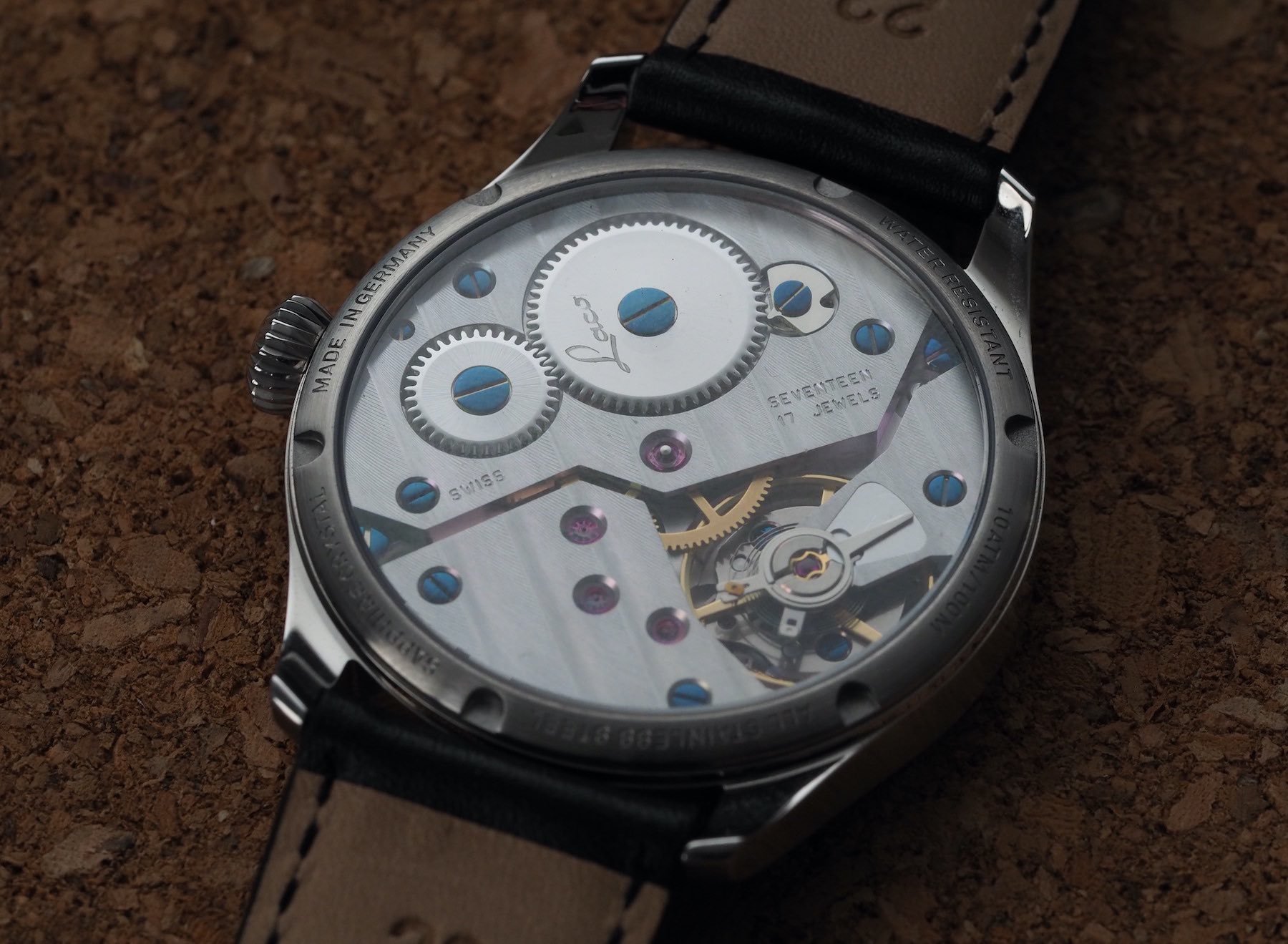 I, like most watchmakers, have an intimate relationship with the Unitas/ETA 6497/8. Try as I might to move on and forget about my first time stripping a watch to pieces, that movement will forever have an odd and ungodly hold over me. And, let’s face it, for credibility, reliability, visibility, and affordability there aren’t many better calibers out there. It’s languid 18,000 train count is a pleasure to watch through the sapphire display back of this, most recent Laco.

There’s not a huge amount of decoration on the movement (just as I like to see with the 649# series). The small amount of embellishment there is (the wordmark engraving on the ratchet wheel), I could have done without. Although the 649# movements are rarely lost within cases due to their whopping ligne size, the edge-to-edge visual on the obverse of the Würzburg really hammers home just how satisfying it is when the caliber fits the case. Laco has renamed the slightly-modified caliber the Laco 98 (refined). 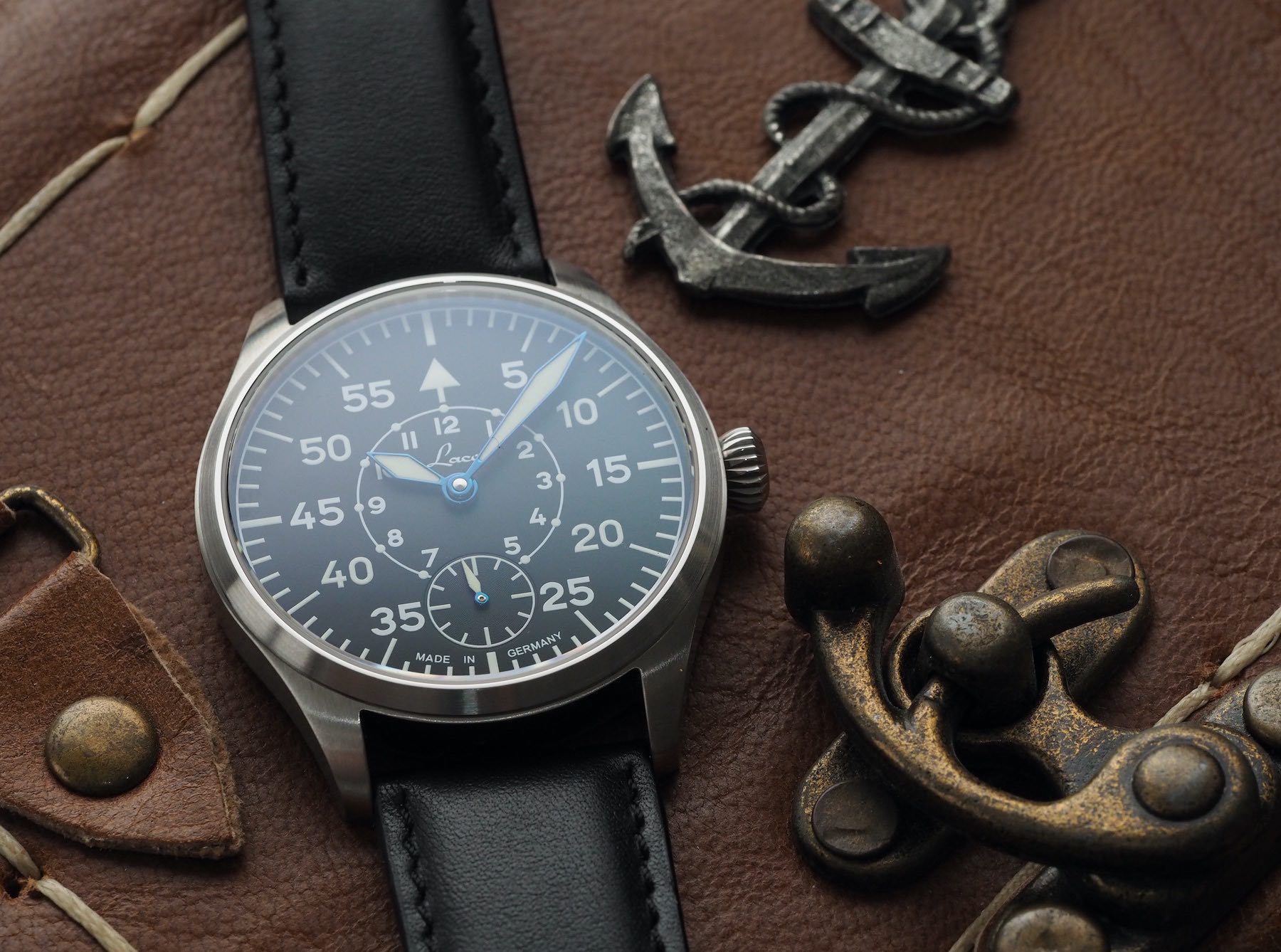 Humble on the wrist

The fact that it is a manually-wound movement helps keep a watch of almost-dinner-plate-proportions humble on the wrist. In fact, although the Laco Würzburg takes up a fair amount of skin, it doesn’t feel unwieldy at all. Despite its size, it’s just not that heavy (just 80.5g including the strap). One a bracelet, we might be talking a different story, but on the supplied leather strap, it’s easy to forget about it. The 10.7mm height and the sympathetic 49.8mm lug-to-lug length mean it wears a lot better than one might expect if you were looking at this thing through a shop window. 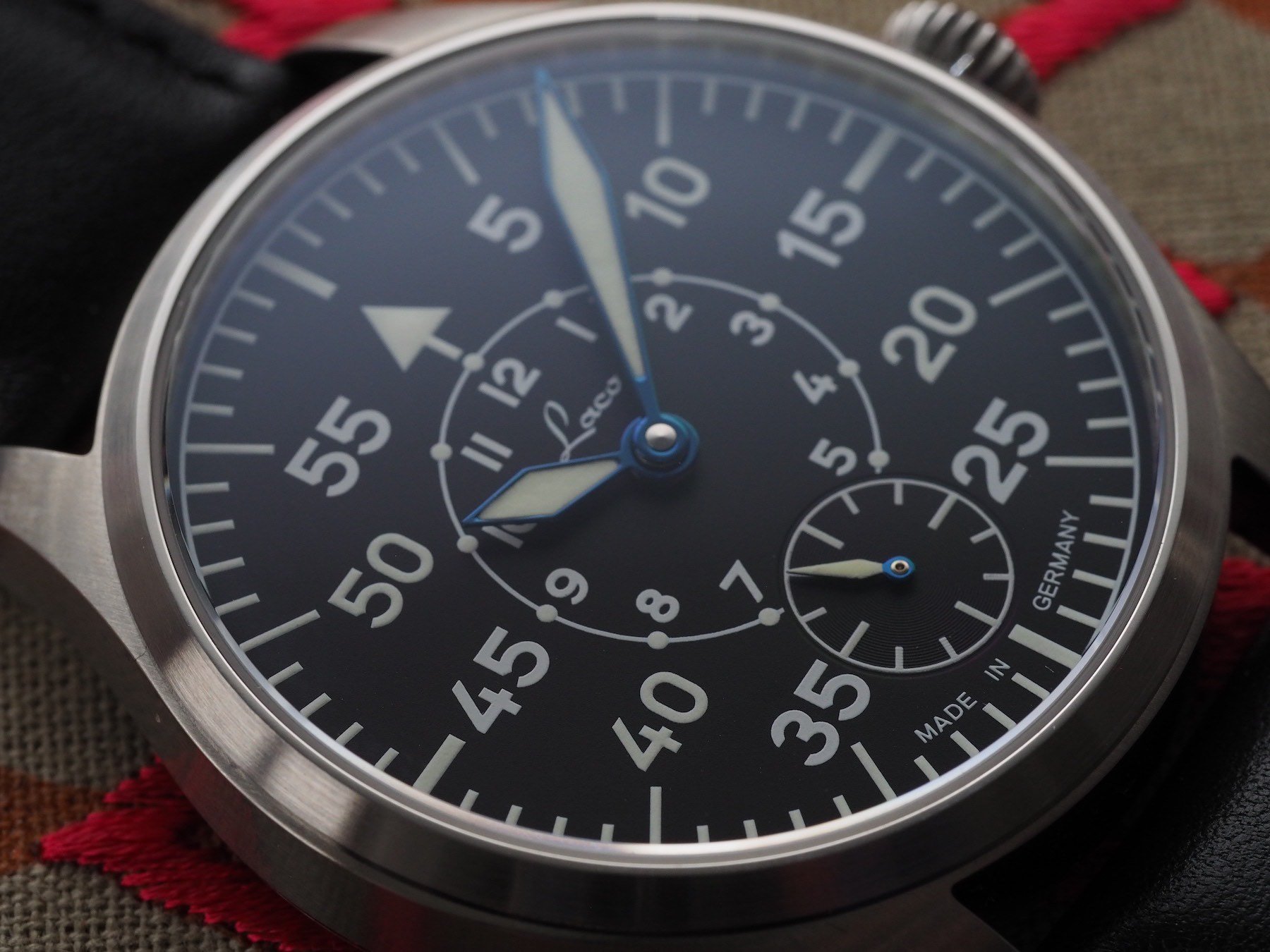 As a small wristed guy, I did have a bit of a problem with some lug overhang. This doesn’t bother me a huge amount and certainly not when the straps have broken in. Once the leather has had time to get suppler, it is able to hug the watch head to my wrist nicely without cutting off the blood supply.

…it just had to be the black dial/black strap combo for me.

When it comes to the strap options for the Würzberg, the black would absolutely be my choice. It was delivered on a brown, which is in itself a nice strap (and would perhaps get more wrist time on the rest of my collection than this model in particular) but it just had to be the black dial/black strap combo for me. I think it really sets the stage for the famous “Type B” dial (the one with ring near the center as opposed to the very clean “Type A” option) to breathe. 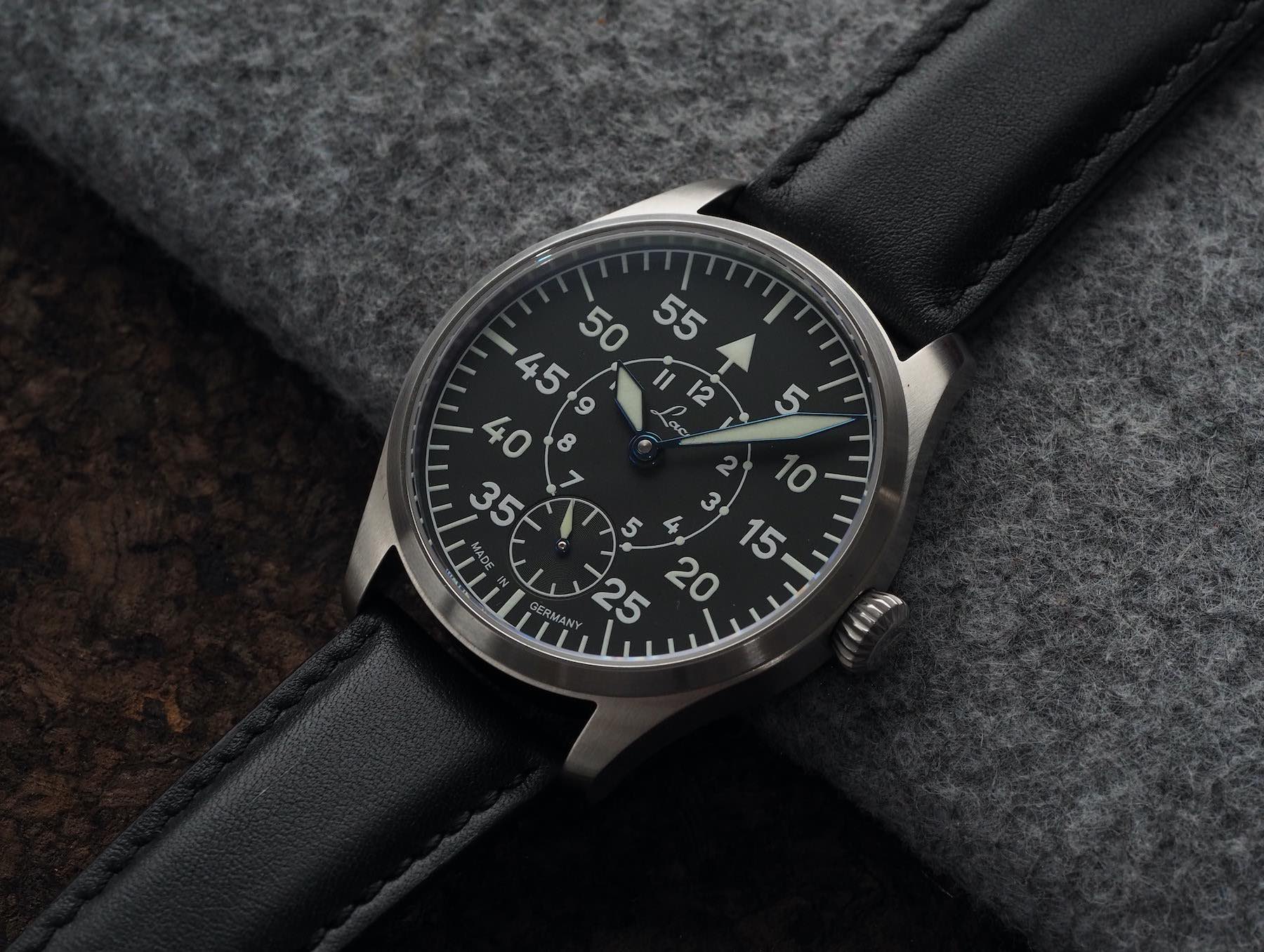 Choosing between the Laco Würzburg dial options was easy. The Type B dial is Laco to me. It would be pretty difficult to make an argument for it being the more legible of the two (unless you have a problem remembering in which order the minutes run), but there isn’t much between the two. What I love about it in comparison to the “A” variant, is how technical it looks. The Type A with nothing but Arabic numerals on the dial (and, in the case of the latest release, a sub-dial also), can just look a bit dull at this diameter. The Type B dial takes full advantage of the dial width and fills it with useful information in an increasingly-iconic format. 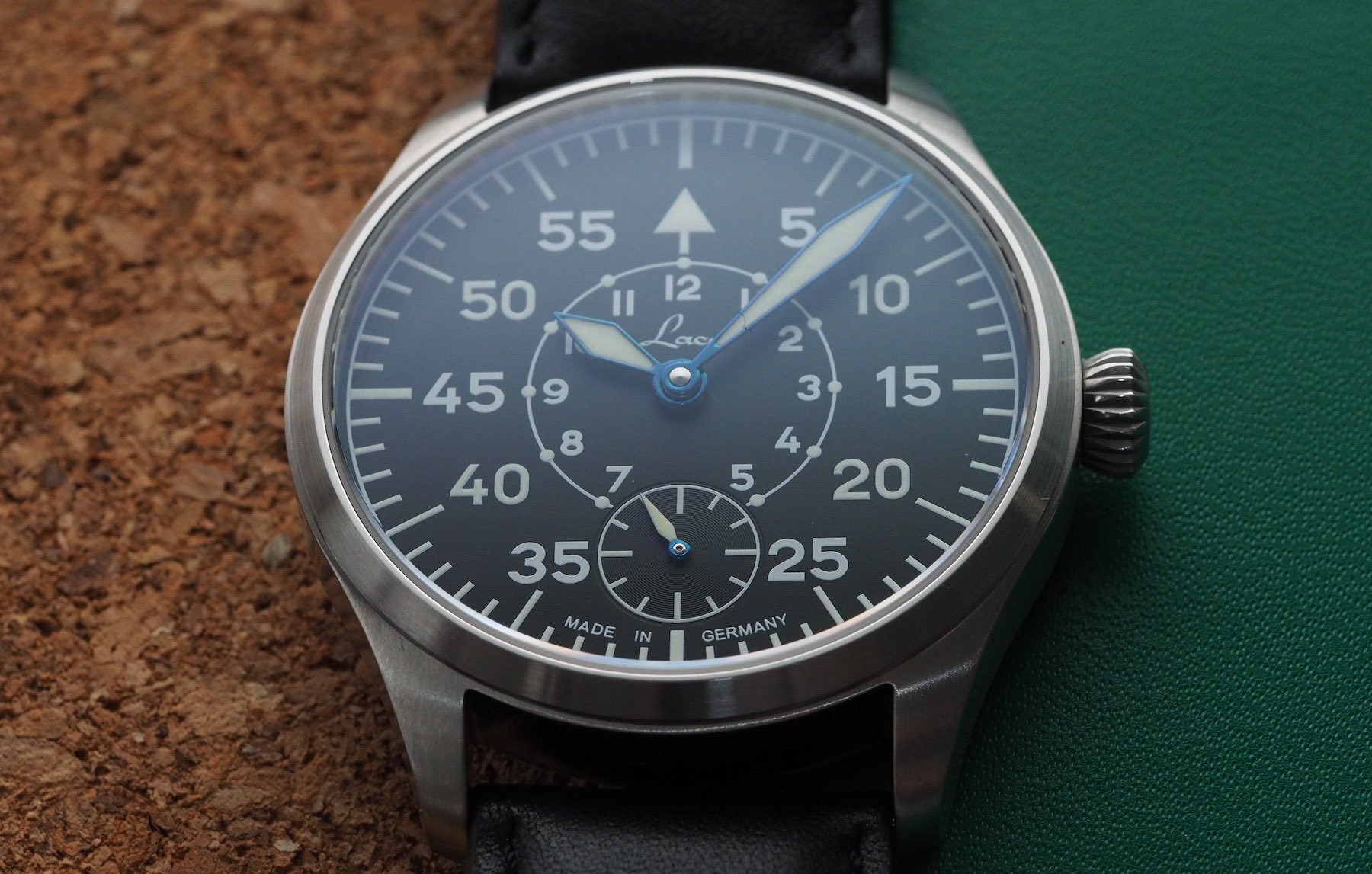 But what about that sub-dial? The sub-dial of the Laco Würzberg is what sets it apart from its forebears. Is it a success? Well, for me, as much as I love the movement responsible for this sub-dial’s presence, it is not. I don’t dislike it, per se, but I definitely prefer the cleaner look of the Laco dials (both A and B versions) without it there.

That said, it grew on me the more I wore it so I plan on giving this one a little bit more time on the wrist to see if my opinion shifts any further. And at just €980, it’s a sub-grand warrior that deserves a shot. But I’m just one guy! What do you, the Fratelli think? I’ve set-up a poll at the bottom of this review asking if you prefer Pilot’s watches with or without sub-dials. Please vote and let us know your personal experiences with watches of this style in the comments section. Learn more about the Laco Würzburg here.