If a book to be written about the history of German watchmaking from the beginnings until today, and a watch to be selected for the cover the result would be simple. Unequivocally the A. Lange & Söhne Lange 1 would take that spot. I can’t think of any other timepiece that had such an impact on the industry as a whole than this one model.

The Lange 1 was and still is the design inspiration for dozens of other brands. The technicality of the movement, albeit not the most complex, is the blueprint for movement designers. The status of the Lange 1 is unquestionable, and it just so happens that this very icon is celebrating its 25th birthday this year. Yes, only 25 years since the Lange 1 emerged from the foggy valley of Glashütte and became an ad imitandum (an example to follow). 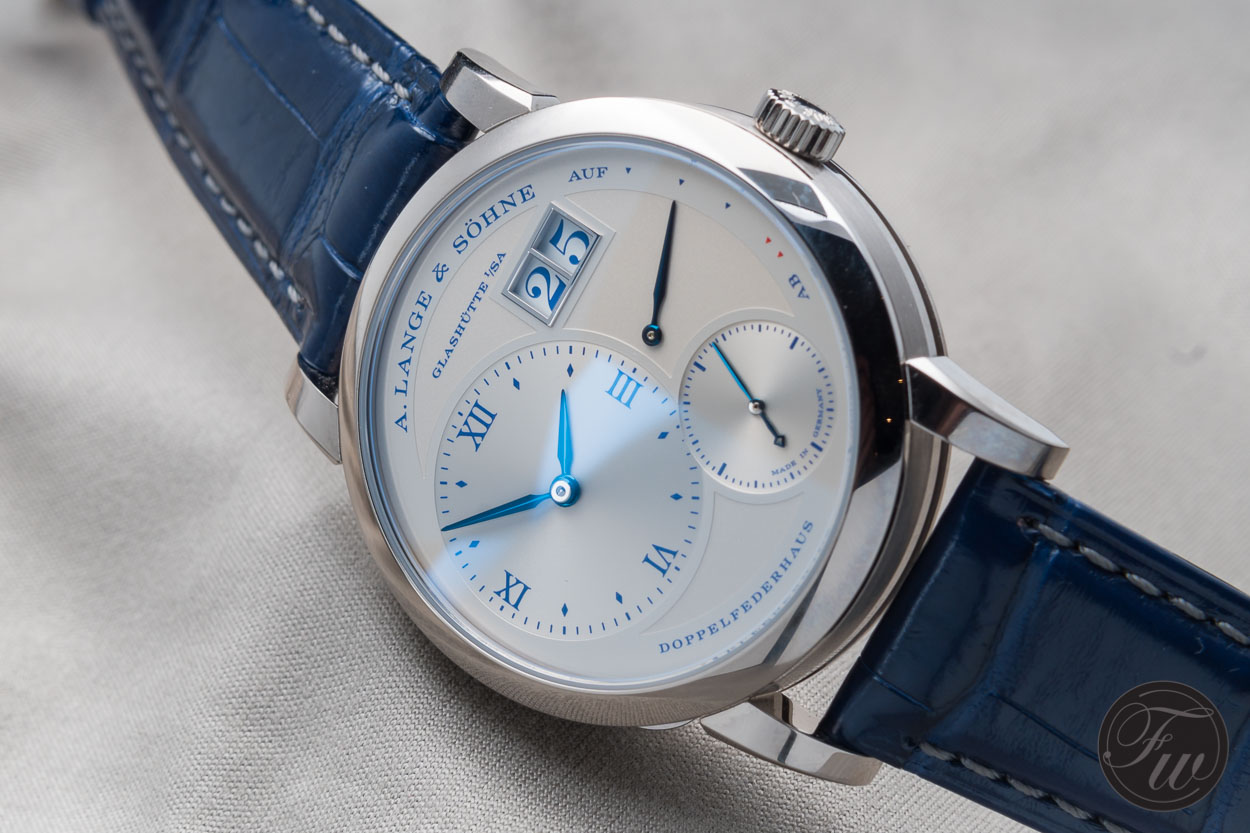 In this article, I will have a closer look at one of the latest from the German brand, the Lange 1 25th Anniversary model. To have the proper appreciation the watch deserves, I have to talk a bit about the beginning though. The company was founded in 1846 by Ferdinand Adolph Lange in Glashütte, Germany. The company specialized in producing pocket watches and later wristwatches. Other than the early Lange pocket watches the most important timepieces form this ear were the Flieger Uhren (pilot’s watches) Lange made for the German Air Force during the Second World War. After the war, Glashütte being on the eastern part of Germany fell under Soviet supervision and the company ceased to exist. After the German reunification in 1990, Walter Lange (the great-grandson of the founder) and his business partner Günter Blümlein resurrected the brand. 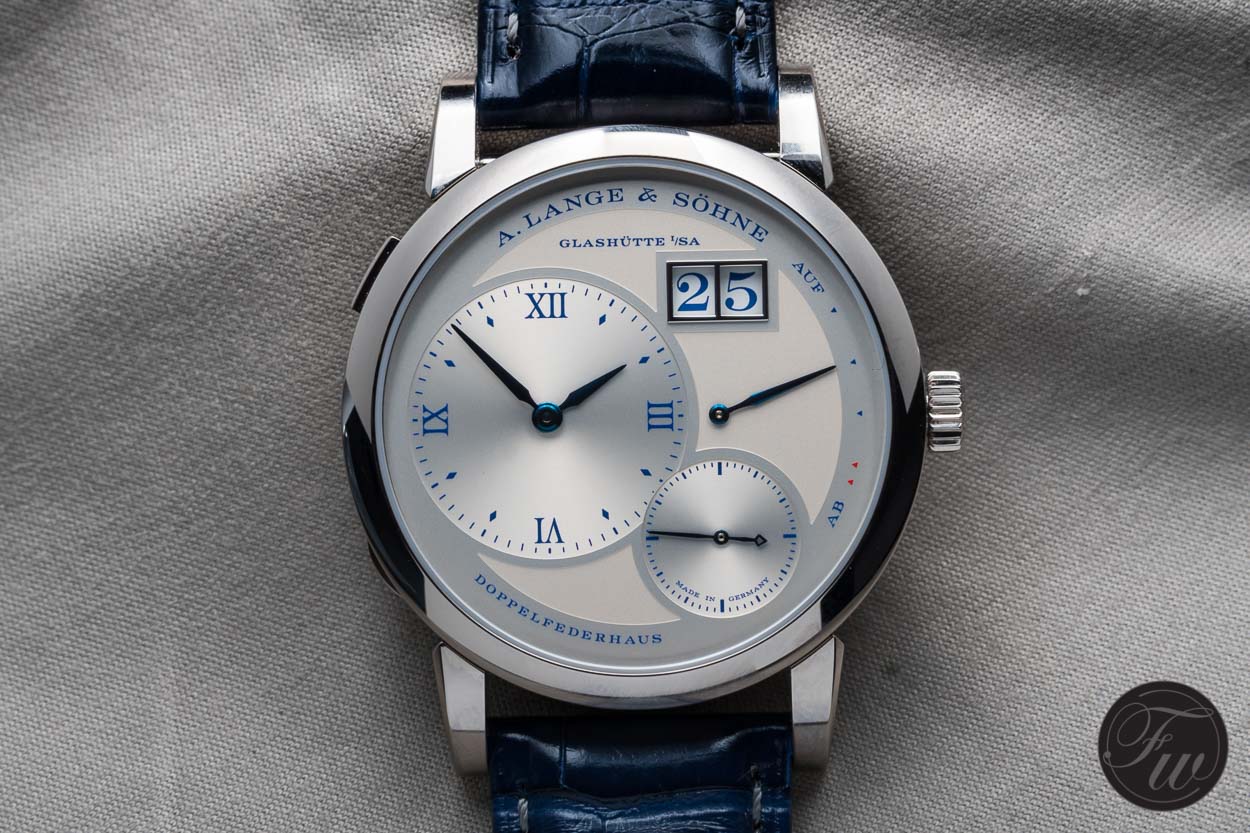 Four years after the reunification and the reestablishment of A. Lange & Söhne, Walter Lange and Günter Blümlein presented the first four models of the new company. It was the 24th October 1994 when in the Dresden Palace they unveiled four models, one by one. The first one was; the Lange 1. Throughout the years the watch remained a solid cornerstone of the brand that Lange often upgraded with new complications or alterations, such as a moon phase or a tourbillon. The case size also “grew” from 38 to 41.9mm. Numerous dial versions appeared from silver to enamel or mother of pearl. Not to mention the armada of precious metals Lange 1 cases comprise of; white gold, yellow gold, pink gold, honey gold, platinum and so on. The watch became an oxymoron, where the typical Lange 1 design remained the same yet completely new and distinct timepieces came to existence. 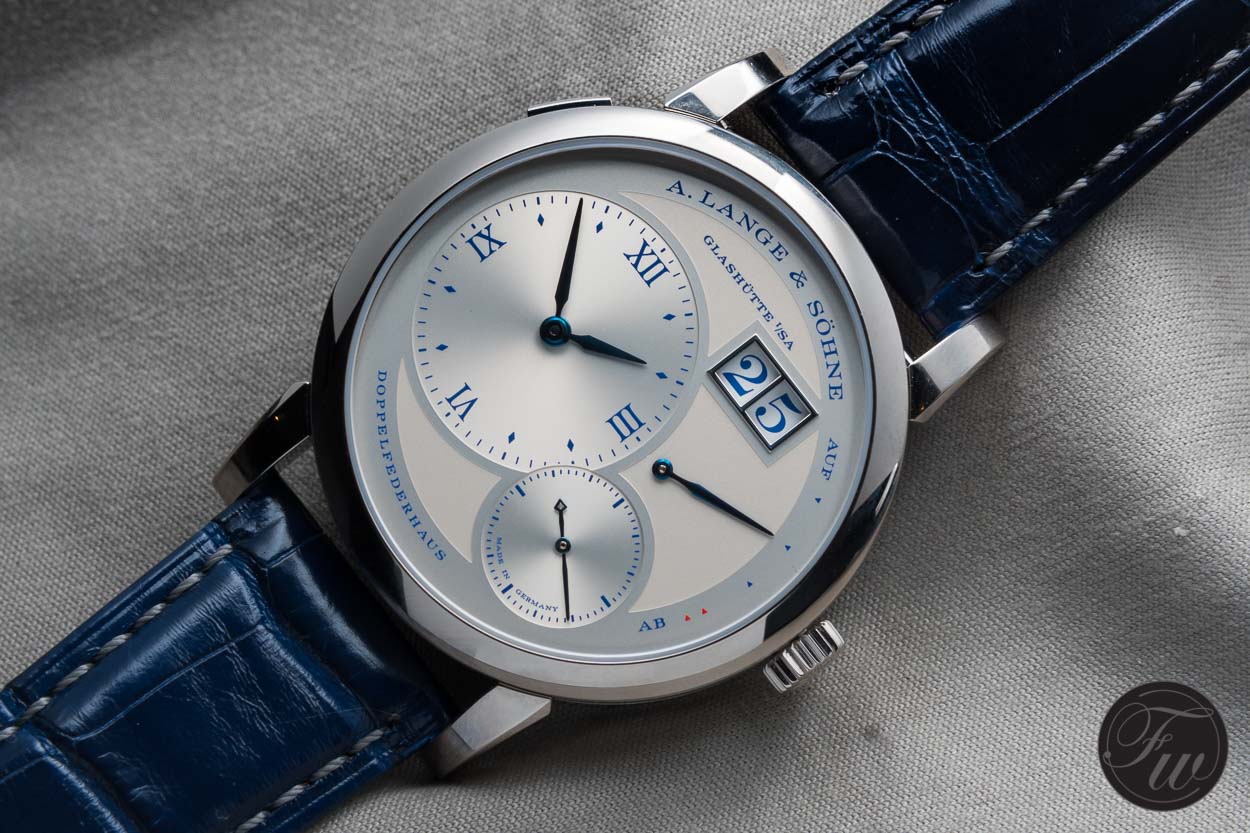 For this special jubilee, the brand created the Lange 1 the 25th Anniversary. The main elements of the watch did not change at all. 38.5mm case with a height of 10.7mm in white gold. The dial is arganté silver with deep blue numerals and indexes, all printed onto the face. To match the color of indices on the dial the hands are blued steel. The layout is the same as any other Lange 1 would be. The subdial to show the time is at 9 o’clock, the outsize date aperture is a 2 o’clock. You can find the power reserve hand at 3 with the scale running from 2 and 4. Lastly, the running seconds subdial is at 5. The asymmetric design resulted in a bit of an uproar in 1994. Fast-forward to 2019 and see how many other brands try to mimic this look. 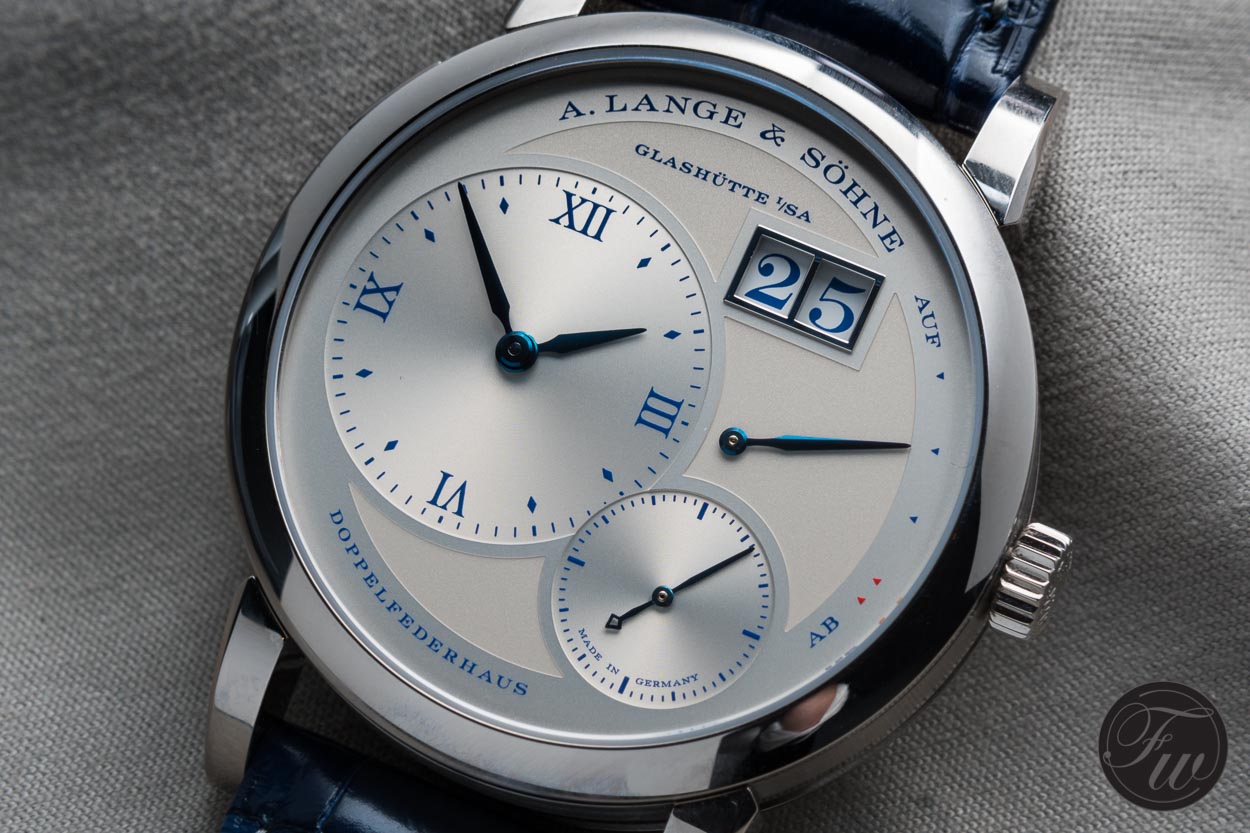 While the silver dial, the white gold case and the blue indices and hands are absolutely gorgeous they are not the only features pleasing to the eye. If you turn the Lange 1 25th Anniversary over, you can see a closed case back. In the middle, you’ll find an engraving of Lange’s headquarter with the words “25 Jahre” for “25 Years” above and  “Lange 1” below this picture. To eternalize the two gentlemen being the fundaments of the success of A. Lange & Söhne, Günter Blümlein and Walter Lange’s names are also on the back. This is however not all. As it is an officer type case back with a hinge you can open it to reveal the beautiful caliber L121.1, Lange’s manufacture movement behind the sapphire crystal display window. What catches our attention first is the hand-engraved balance cock although the L121.1 has much more to offer. 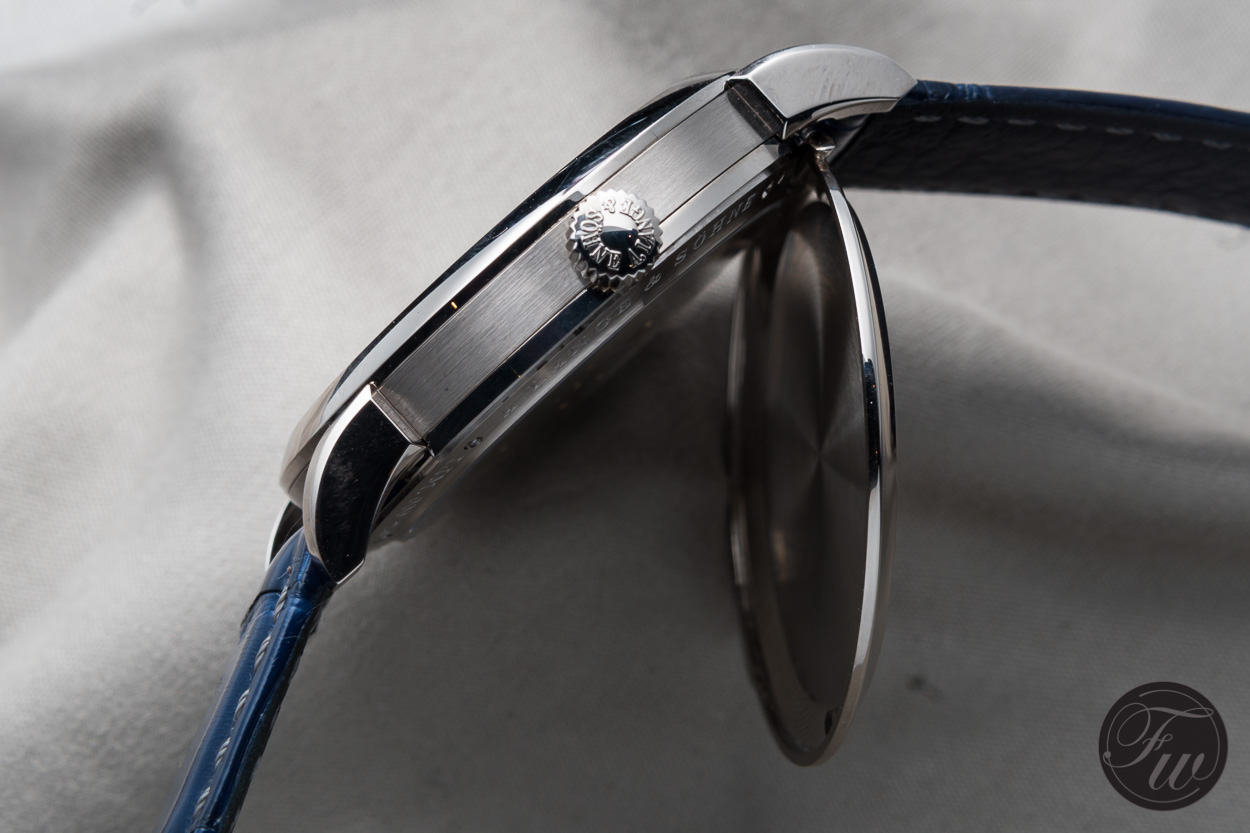 While the design of the Lange 1 hasn’t changed much throughout the years, its movement has. It is the component that reflects technical evolution. The caliber in the Lange 1 25th Anniversary, the L121.1, is a manual wind movement that the brand introduced in 2015. Just like its predecessor, the L901.0 – the very first caliber in a Lange 1 –  the L121.1 is a beautifully decorated movement that has a twin mainspring barrel with a power reserve of 72 hours. You can find the Lange quality hallmarks all over the movement; blued screws, engraved balance cock, and a three-quarter plate made of German silver. This caliber is a watchmaking perfection both technically and visually. The L121.1 has 368 parts, 43 jewels, and 8 gold chatons. Its frequency is 21,600 semi-oscillations per hour and contains a balance spring that Lange manufactures in house. 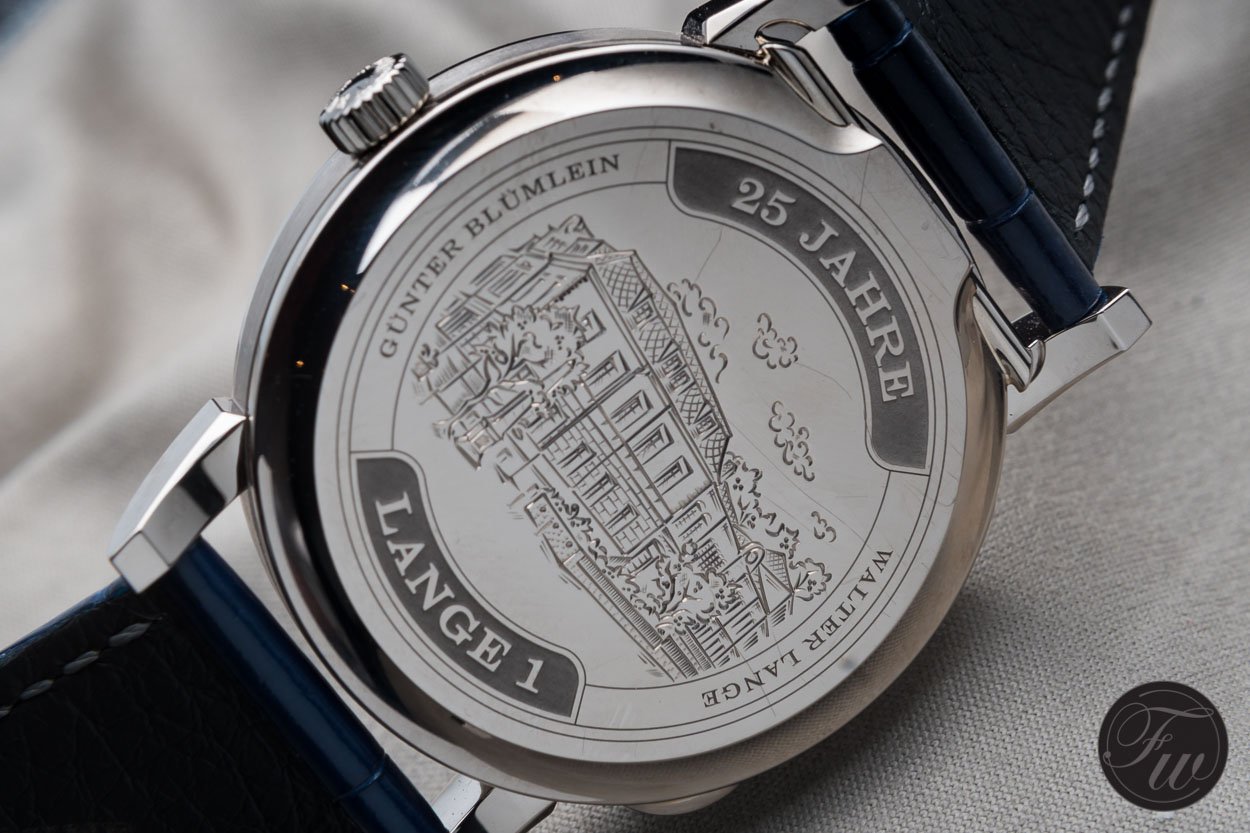 The Lange 1 25th anniversary comes on a hand-stitched alligator leather strap in dark blue with grey stitching. The pin buckle is white gold to match the case material. Due to the size, it sits very comfortably on the wrist. This is not a sports watch so the size is perfect, not only from heritage but from a dress watch point of view too. As the watch is a commemorative piece it comes with a limitation of only 250 pieces. This is not a huge number by any means but if you are on the market for a Lange – and especially a Lange 1 –  you know that these timepieces won’t come by the thousands. The price, as one would expect for such a piece, is hefty. €43, 000 to be precise, but if you are a Lange fan it’s worth every penny. And then some.

But do not worry, A. Lange & Söhne will introduce something special on every 24th of the month in 2019, until October. We keep you posted! 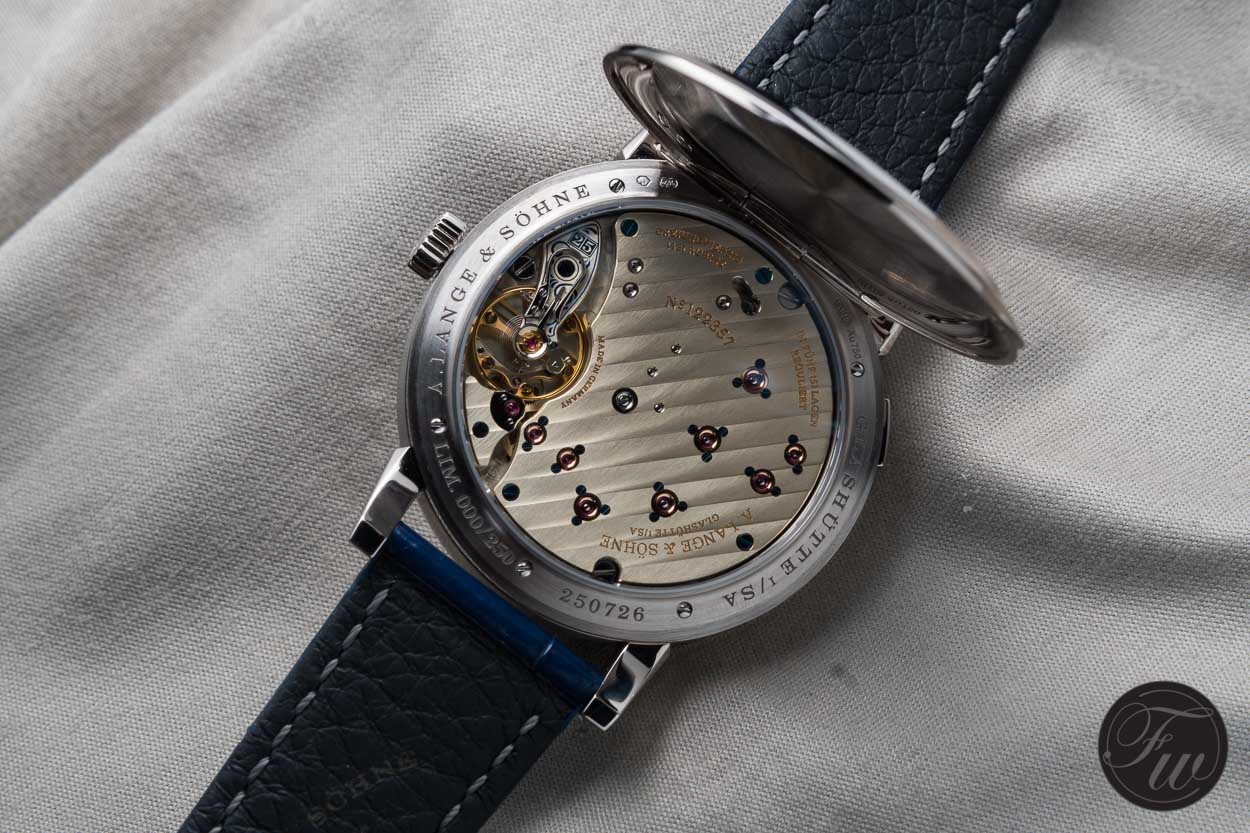